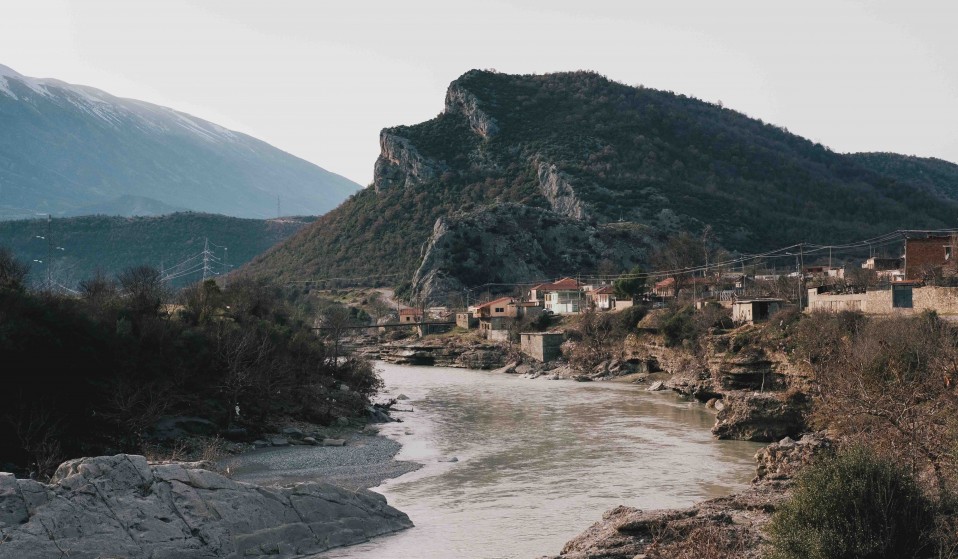 There's a tranquil beauty that flows down Albania's Vjosa river, but now the traditional livelihoods of those who live upon it are under threat.

There's a tranquil beauty that flows down Albania's Vjosa river, but now the traditional livelihoods of those who live upon it are under threat.

When I found out there was only one undammed river left in Europe, outside of the scantly-populated Russian Arctic, I was shocked.

The River Vjosa in Albania flows unobstructed for 270km from northern Greece to the Adriatic. Its waters run through mountainous landscapes, farmed by local people for generations; sheep graze on its banks and it is teeming with wildlife of its own. 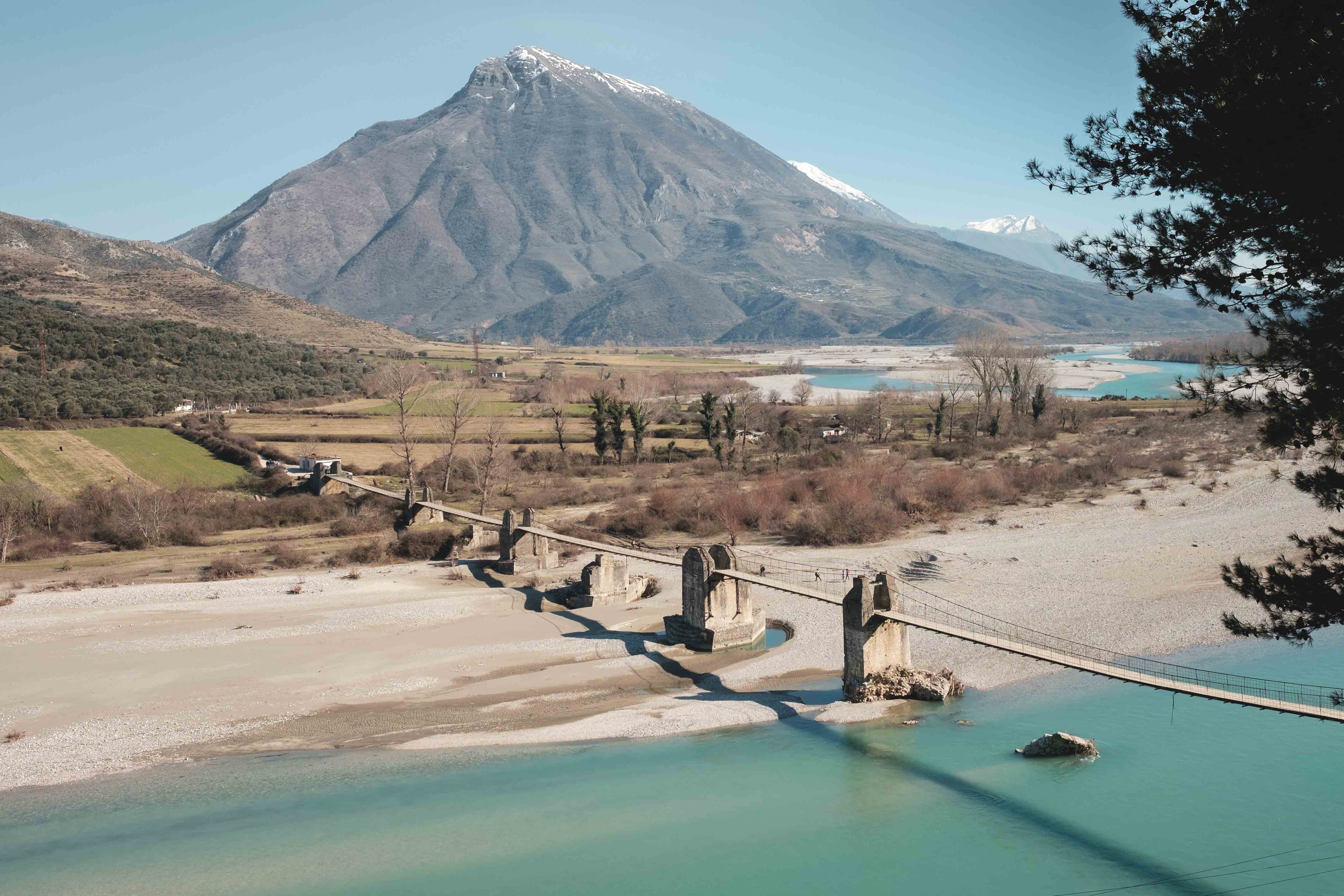 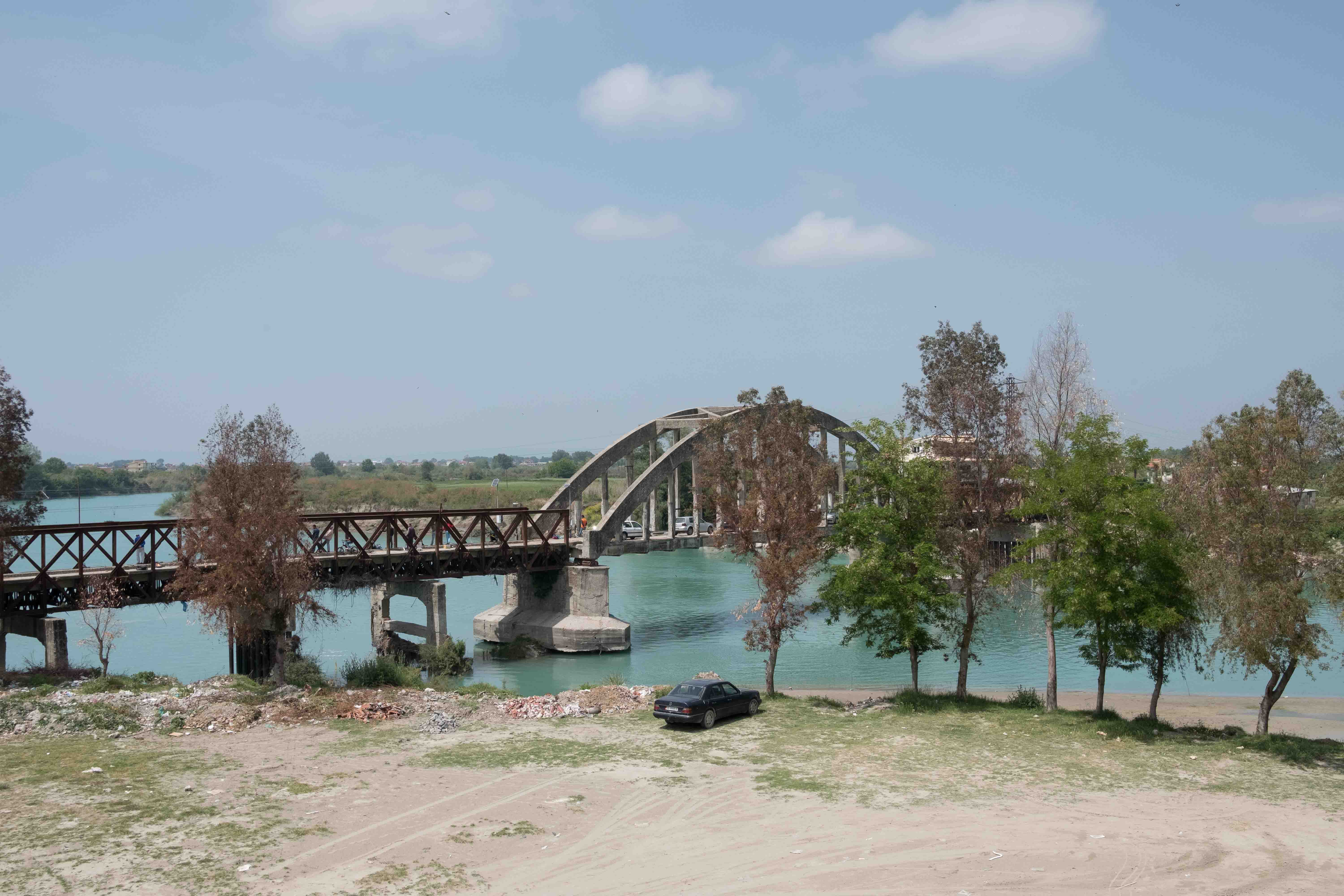 Unfortunately it’s under threat. A growing appetite (from some) for hydropower projects in the Balkans has seen over 400 dams earmarked for construction in Albania alone, eight of which are on the Vjosa.

Despite promising to make the river a national park in 2015, Prime Minister Minister Edi Rama struck a deal with a Turkish energy firm to build its first dam near the village of Poçem. A battle is underway, between the government and those communities set to lose farmland to flooding caused by the construction.

I decided to travel the length of the Vjosa, both to speak to people along its course and to see the river in its purest form for myself. I rented a car in the Albanian capital of Tirana, and headed south through the country’s farmlands and rolling hills. 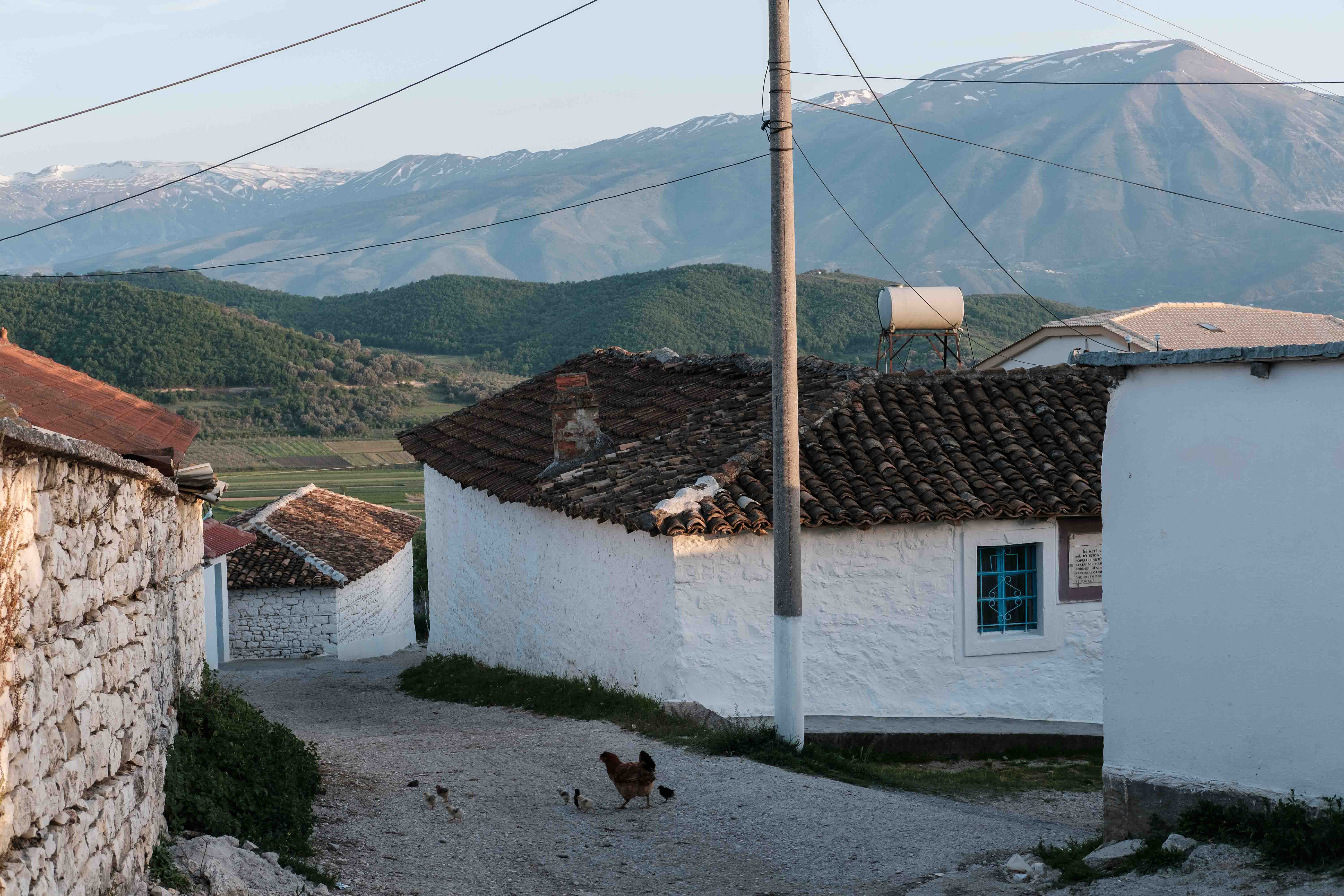 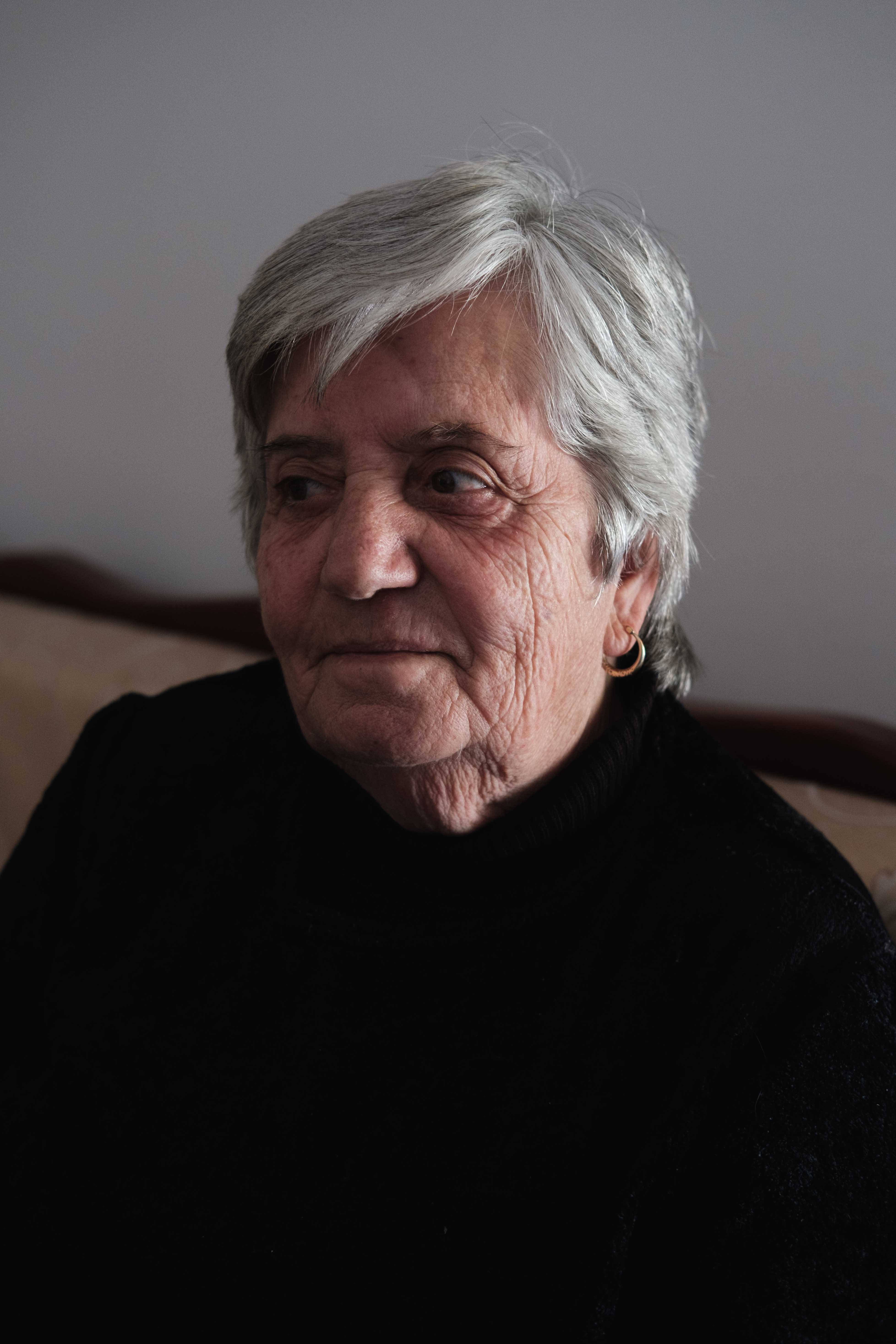 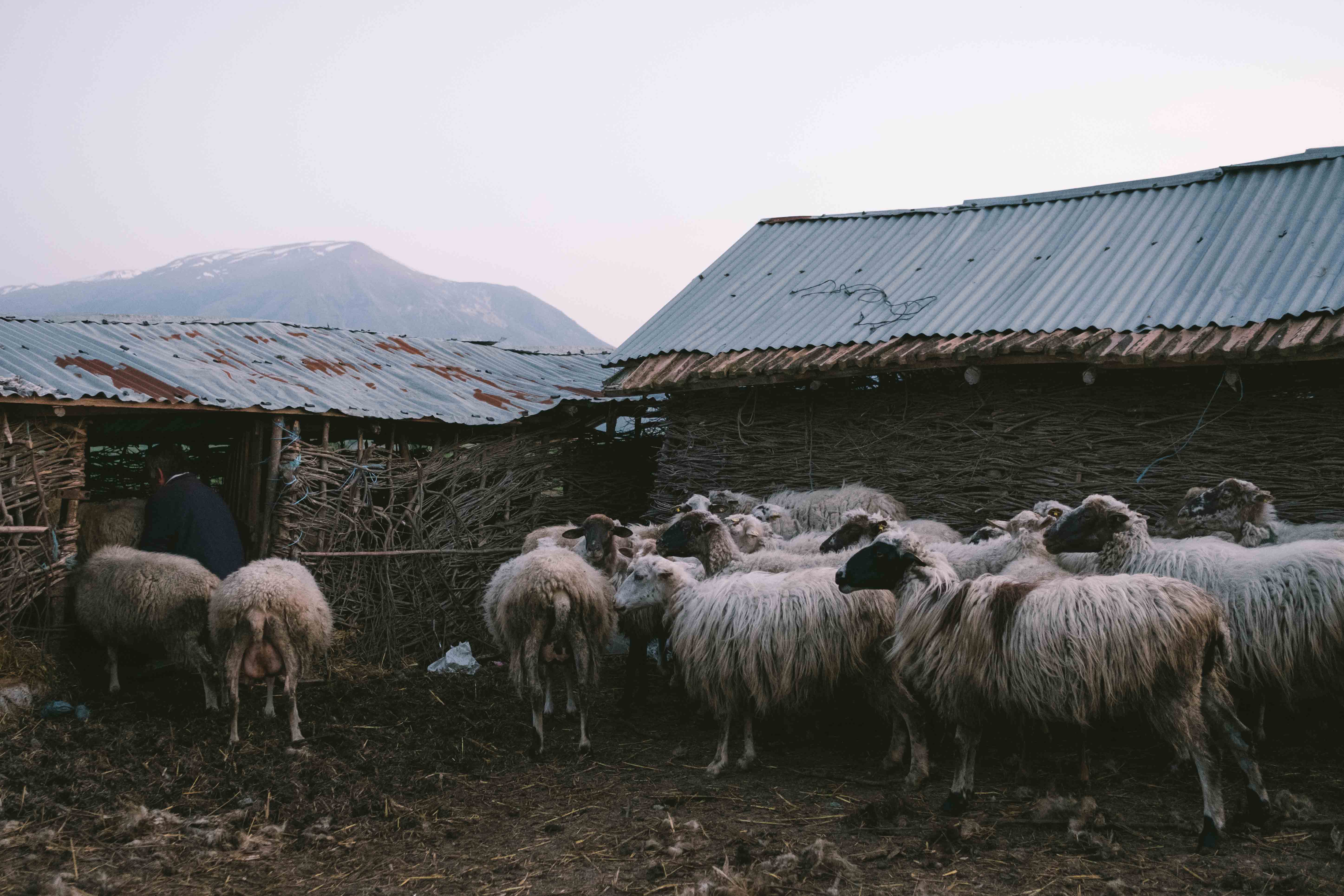 At soon as I caught site of the river’s deep aquatic beauty my foot hit the breaks. There’s truly something special about those shades of turquoise.

What struck me so quickly is how the character of the river changes, from a rushing flow between sharp mountainous valleys in the south, to a slower gait stretched out between wide fertile plains near the Adriatic Sea. Life is slow on the river and agriculture is vital, one is more likely to get stuck in a traffic jam of sheep than cars.

The area around the city of Përmet is highly regarded for its food, due in no small part to the quality of ingredients coming from the unspoiled natural surroundings. Local restaurateurs, eager to draw in tourists, specialise in traditional cuisine. 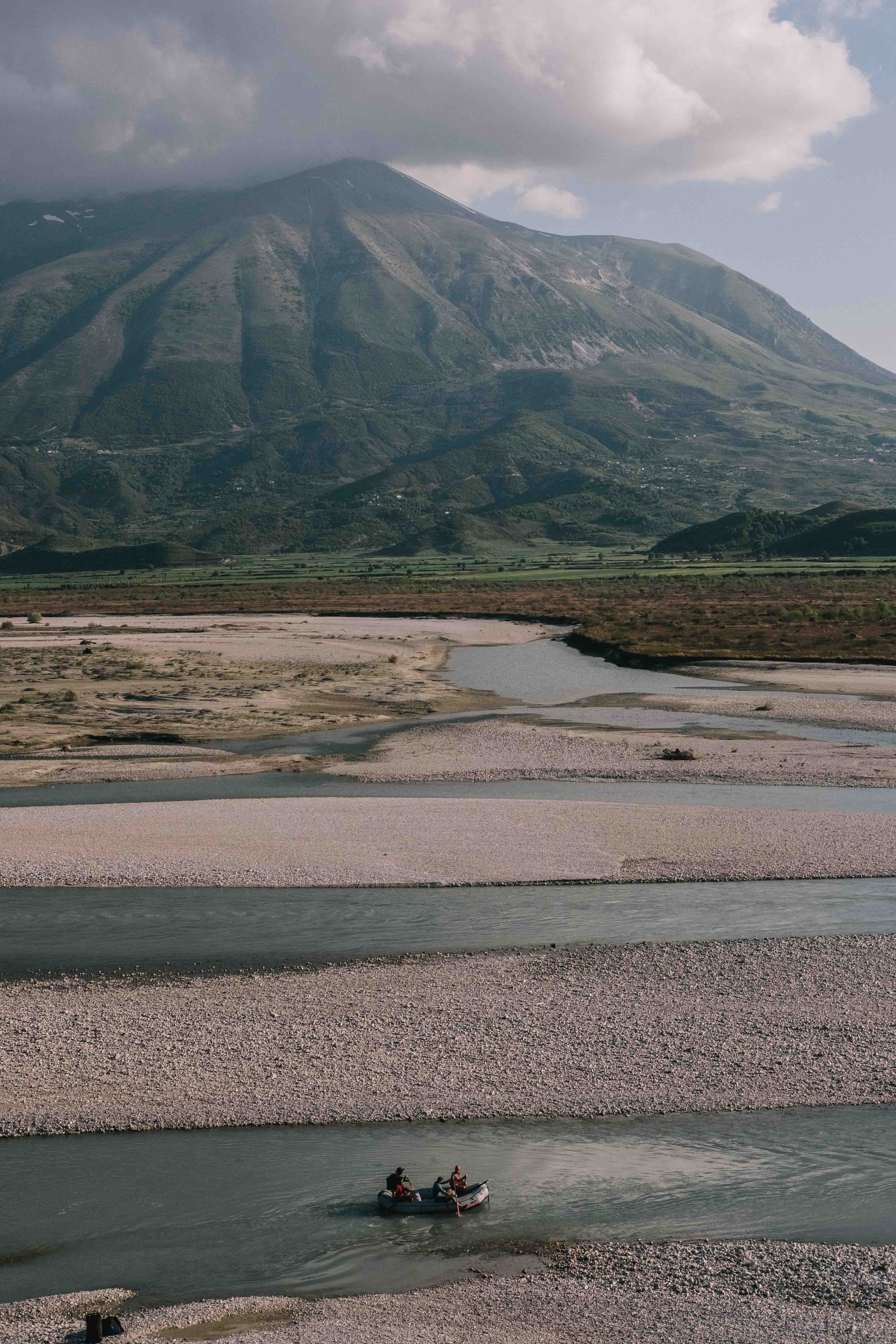 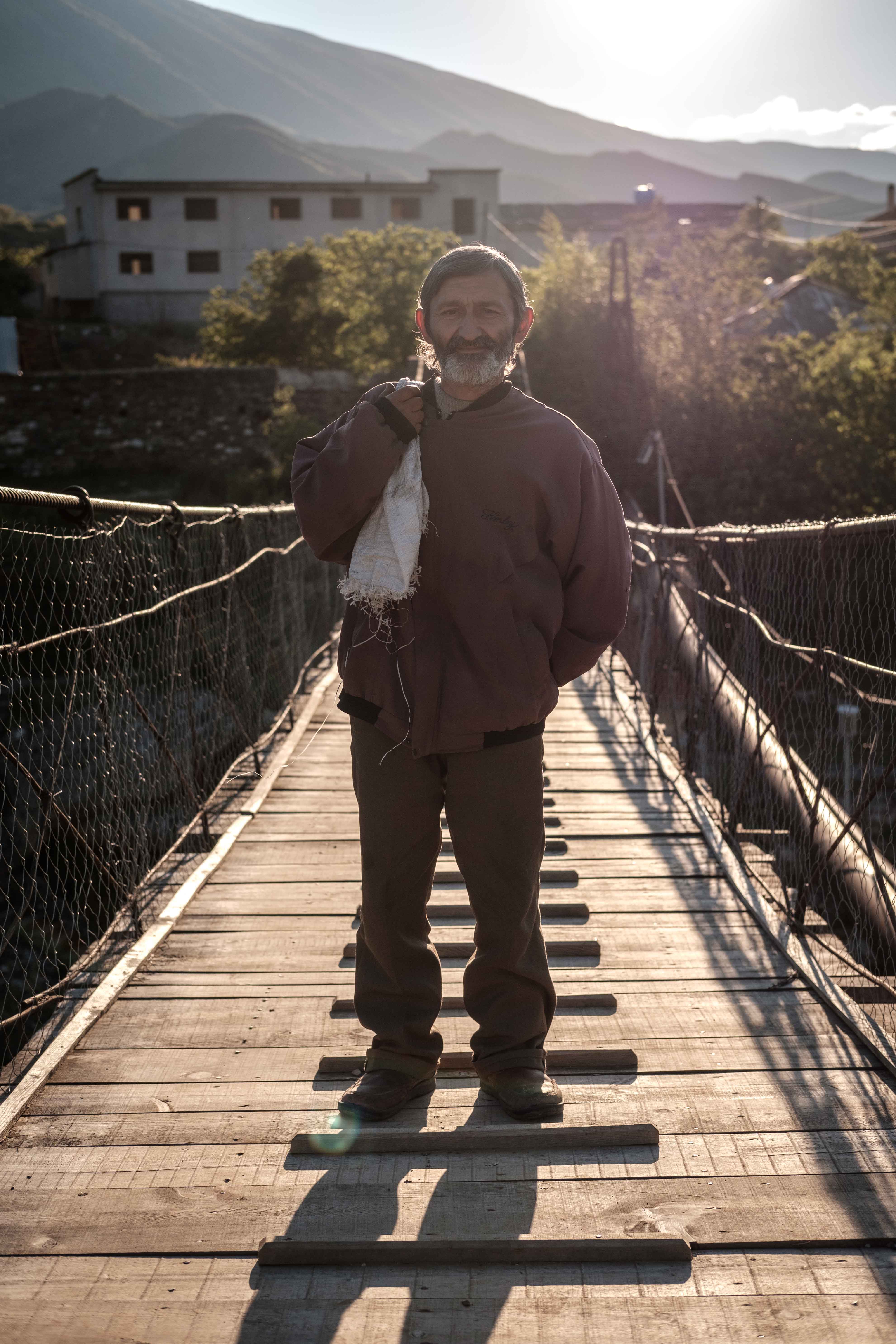 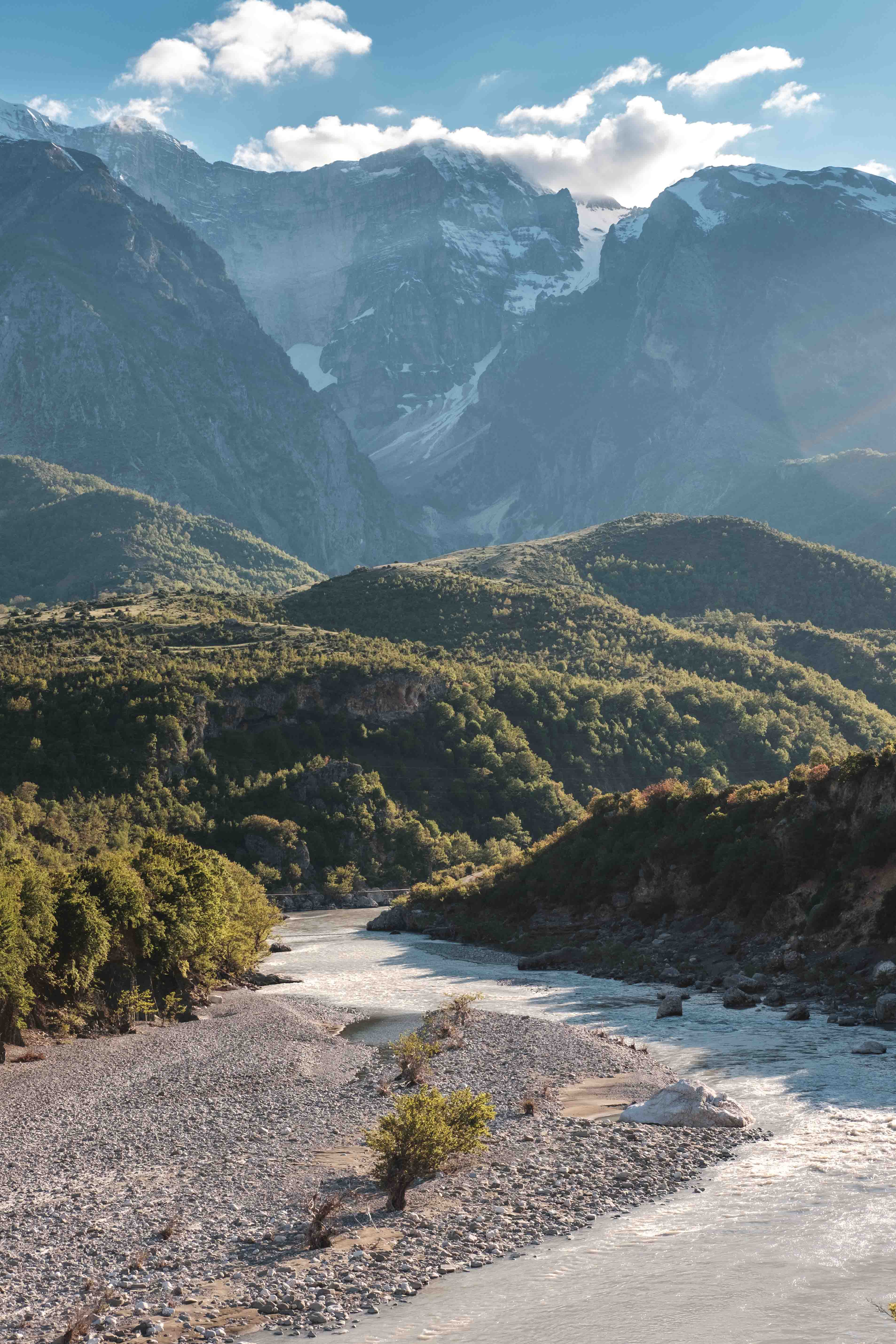 Around the Vjosa and throughout Albania, another type of crop is increasing in popularity: marijuana. More than once I stumbled upon tarp-covered plots that’ll be brimming with cannabis plants come summer.

During the long days following the water I got chatting to locals I met along the way. Almost every family had at least two adult children living abroad, sending back a chuck of their earnings. They weren’t just concerned about the future of the biodiversity, more pressing was their livelihoods and work.

Nowhere was this more obvious than the village of Kuta near the site of the proposed Poçem dam. Farming is the only industry here, and because the village is almost entirely isolated due to poor roads, most people depend on their crops and livestock for survival. 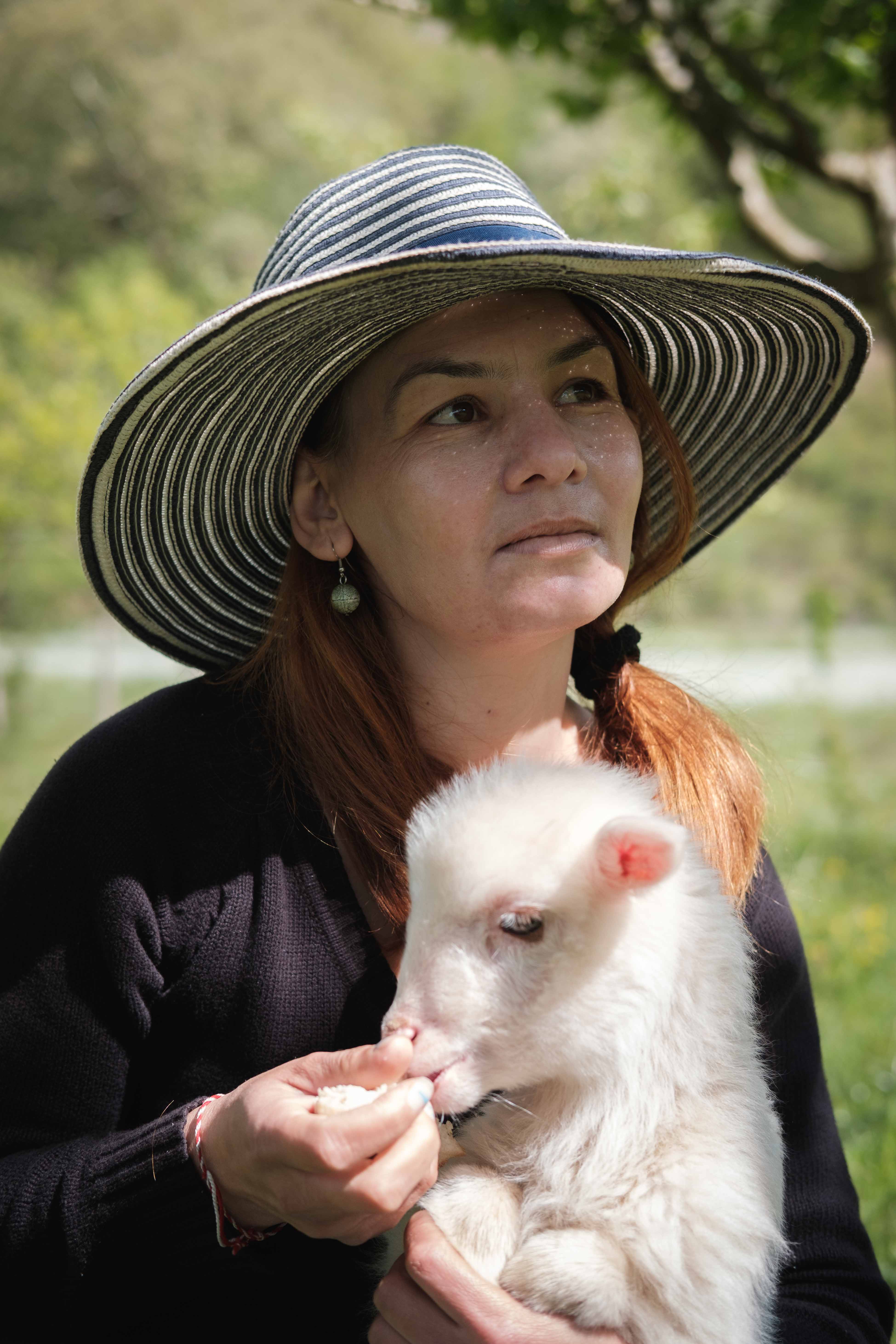 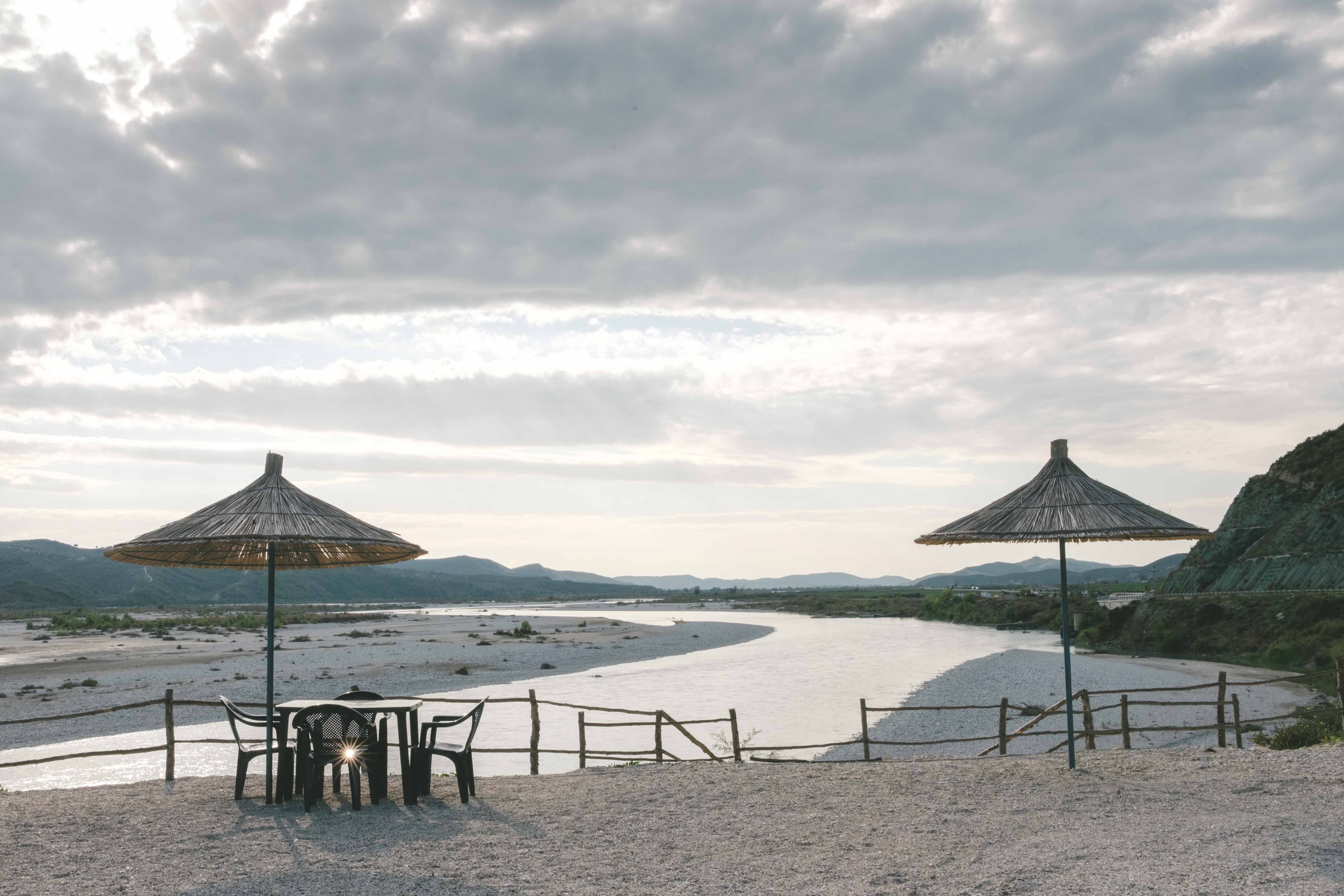 Were the Poçem dam to be constructed, the entire agricultural plain below Kuta would be flooded. Families would only receive compensation of €0.50 per square meter of land lost, and because land distribution was so chaotic after the fall of communism, most do not hold the proper documents. They may get nothing at all.

Luckily just this month an Albanian court ruled in favour of 38 of these local residents and some environmental NGOs, in a case against the government that will halt construction of the Poçem dam.

The decision was a victory for the locals, but possibly only a temporary one. With further dam projects proposed on the Vjosa, the issue isn’t going away soon. Money and corporate interests hold massive influence in Albania, and until the river is properly protected there will continue to be threats to the communities who live here when someone sniffs out the potential of making a profit.

Linkedin
RELATED ARTICLES
OTHER ARTICLES
A new podcast is opening up the conversation between trans women and trans amorous men in the hope of building coalitions.
Since 2007, Gideon Mendel has made 20 trips to document floods in 13 countries. The result is an alarming record of what has already been lost to the climate emergency.
The action took place in response to the 200 asylum-seeking children who were placed in hotels run by the Home Office who have gone missing.
At his West Bank restaurant, Fadi Kattan established himself as the voice of modern Palestinian cuisine. Now, he’s bringing his innovative, bold flavours to the UK’s capital.
Filmmaker Laura Poitras discusses her new documentary which traces the remarkable life of the artist-activist and the impact of her battle against the US opioid crisis.
Theo McInnes’s photos of the annual event provide an intriguing snapshot of contemporary Britain.