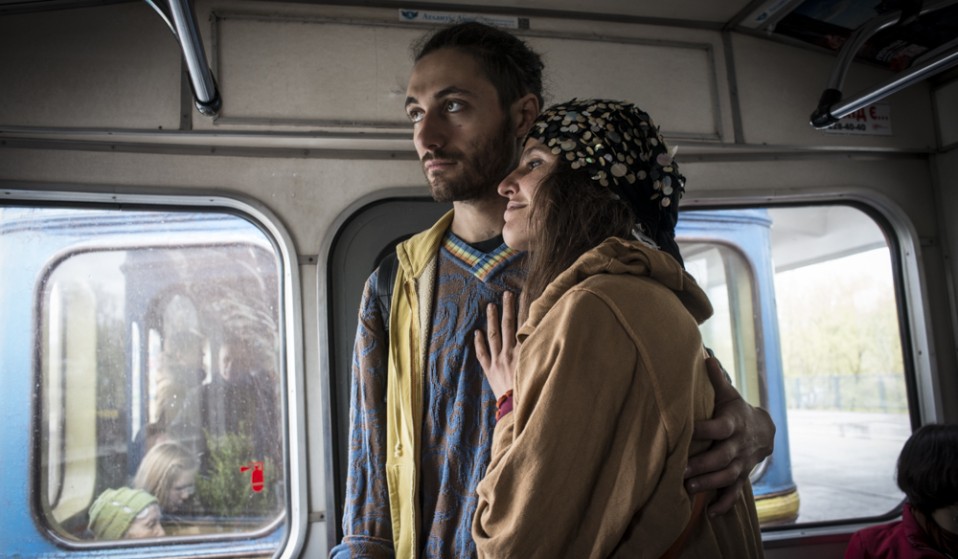 The Ukraine may be locked in a tug of war, but the country’s youth have a mind of their own.

The Ukraine may be locked in a tug of war, but the country’s youth have a mind of their own. They tell photojournalist Monique Jaques why they will never stop pushing for peace.

Ukraine is still healing. Following the shocking deaths of over 100 protesters in the Euromaidan uprising – a wave of protests triggered by frustrated citizens calling for European integration and an end to political corruption – Ukrainians are still processing the violence that ensued. After the bloodless Orange Revolution in 2005, many thought these protests would be similar. Now, stuck between warring neighbours – Russia pulling in one direction, Europe in the other – many of Ukraine’s youth feel torn between their Russian roots and potential European Union future.

The Euromaidan protests are credited with not only removing President Viktor Yanakovich, but uniting an apathetic disjointed youth. In a country like Ukraine where corruption ran unchecked for years, few citizens were interested in politics. But when student protests rocked the capital and kickstarted the Euromaidan movement in November, 2013, Ukrainians bore witness to the power of change.

This ongoing fight has brought together disparate groups that used to be at odds, like the right-wing Svoboda and Tatar Muslim minorities. “We’re still the same nation with the same thoughts, why shouldn’t we fight for freedom?” questions 22-year-old Yevhen Revko.

Now, after the loss of Crimea and tensions in the eastern regions, many young people in Kiev fear the upcoming years will be bleak and difficult. But Ukrainians like Tihon Poitiko, 18, say they are fighting for their country and a better future – one that includes them and their now united voices. 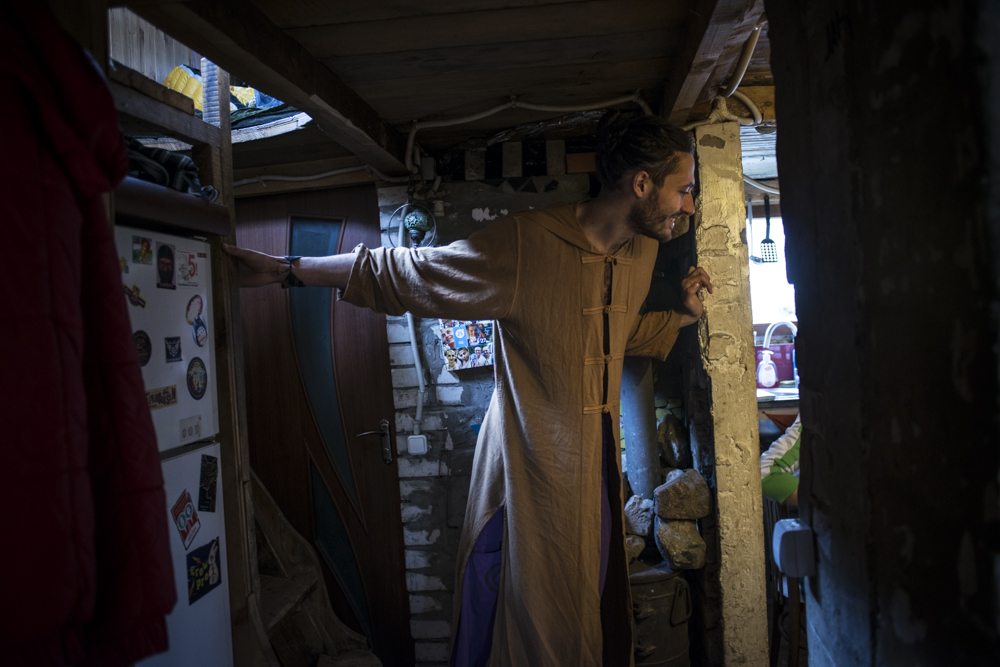 Oleg Kozachenko, actor
24-year-old Oleg, an actor at the Planet Theatre, is pleased to see the Maidan – or ‘Independence Square’, where the protests took place – slowly becoming constructive rather than destructive. He worked at the Maidan, volunteering his time to serve food and tea to protesters. After the violence, he didn’t care about the EU or Yanakovich and just wanted to help those around him. Since then, he’s held jam sessions in the square as a healing method. “I hope the new Ukraine will not live in fear or hate, and we will do away with borders and think independently.” 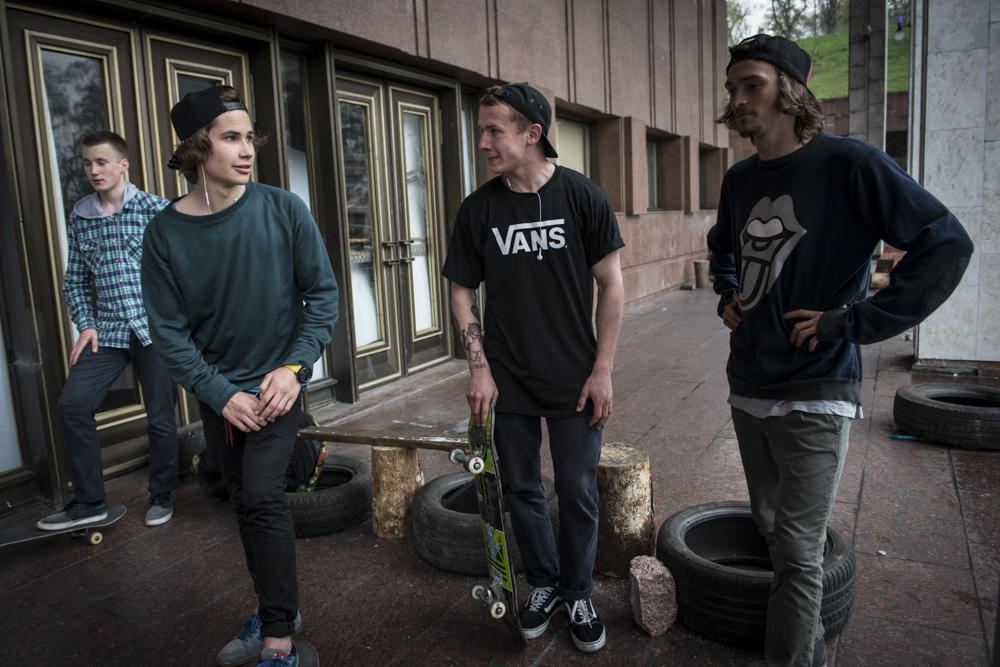 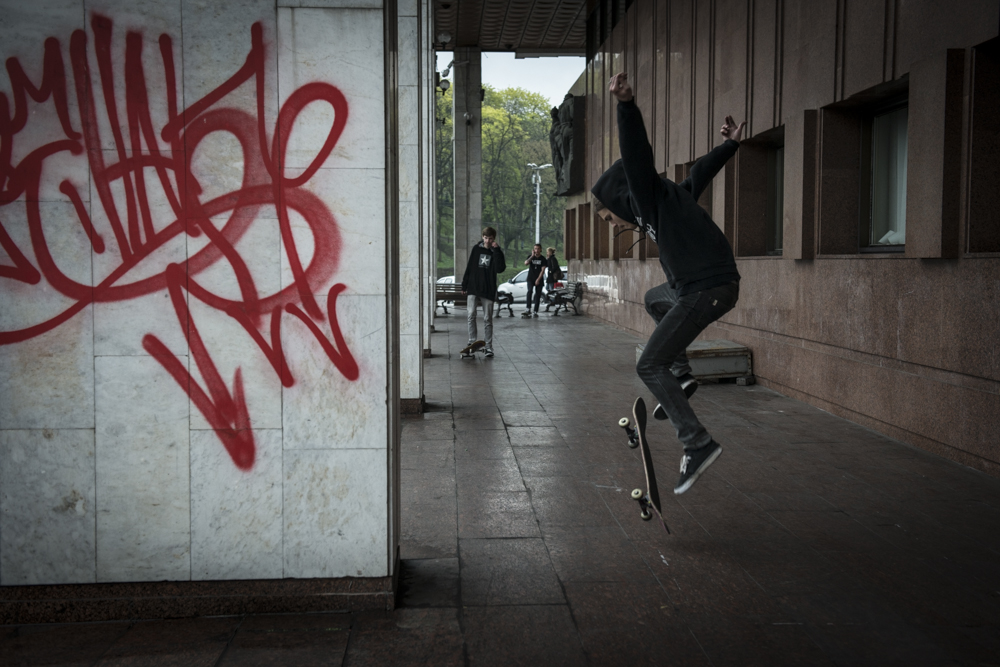 Tisha, as he is known by friends and family, is an 18- year-old skateboarder for Vans and Monster who is studying correspondence classes at a university in Kiev. “Our generation was raised on fear and anger, but the mentality is changing. Our country grew, mentally, after Maidan. Everyone wants change now and sees that it is possible.” He now skates at what was the Ukraine House, a former government building that was previously off limits for skaters. He hopes to leave Ukraine to skate in the EU. “Of course we love our country – we were born here. But it seems unlikely there will be a good future.” 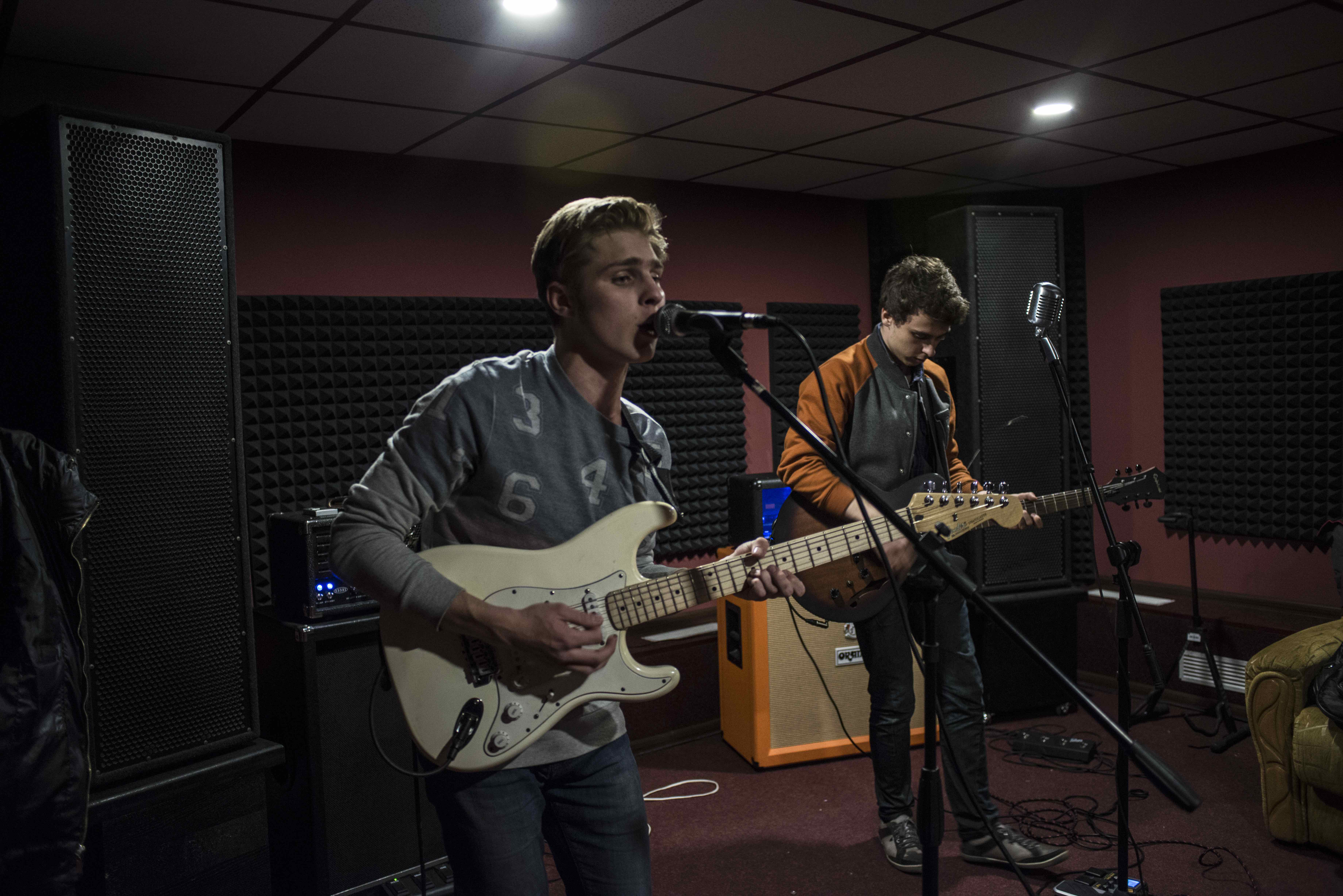 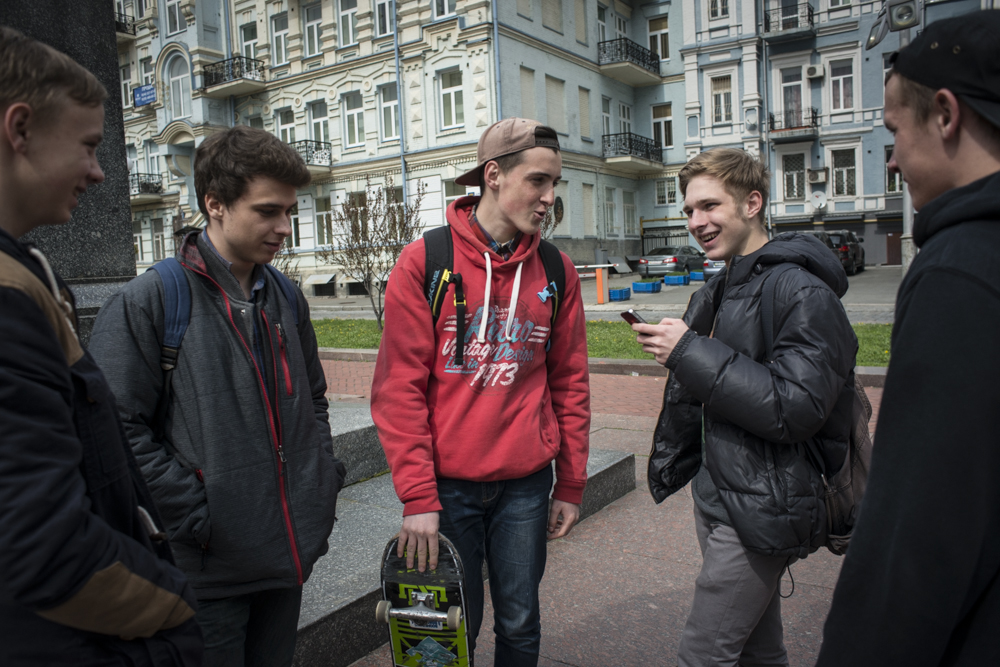 Pop-rock band Bonehouse are friends Danyl Bogdanerko, Denys Rybchenko, Vitaly Koutsiuk and Raslan Zubchenko. The 18-year-old university students, who grew up together in Kiev, played a concert in the Maidan for 7,000 people during a student strike.

“The national spirit has woken up,” says vocalist Denys, about his newly patriotic country. “Ukraine has a history of fighting for freedom,” says frontman Danyl. ”It has a tough geographic position, we have bad neighbours like Russia, but we are strong. The Maidan has changed people, changed the way they think. People are getting nicer.” As a group, they’re frustrated by the lack of opportunities for talent in Ukraine and, as most Ukrainians listen to club music not pop-rock, they hope to go to the EU to find a record label that will take them on. 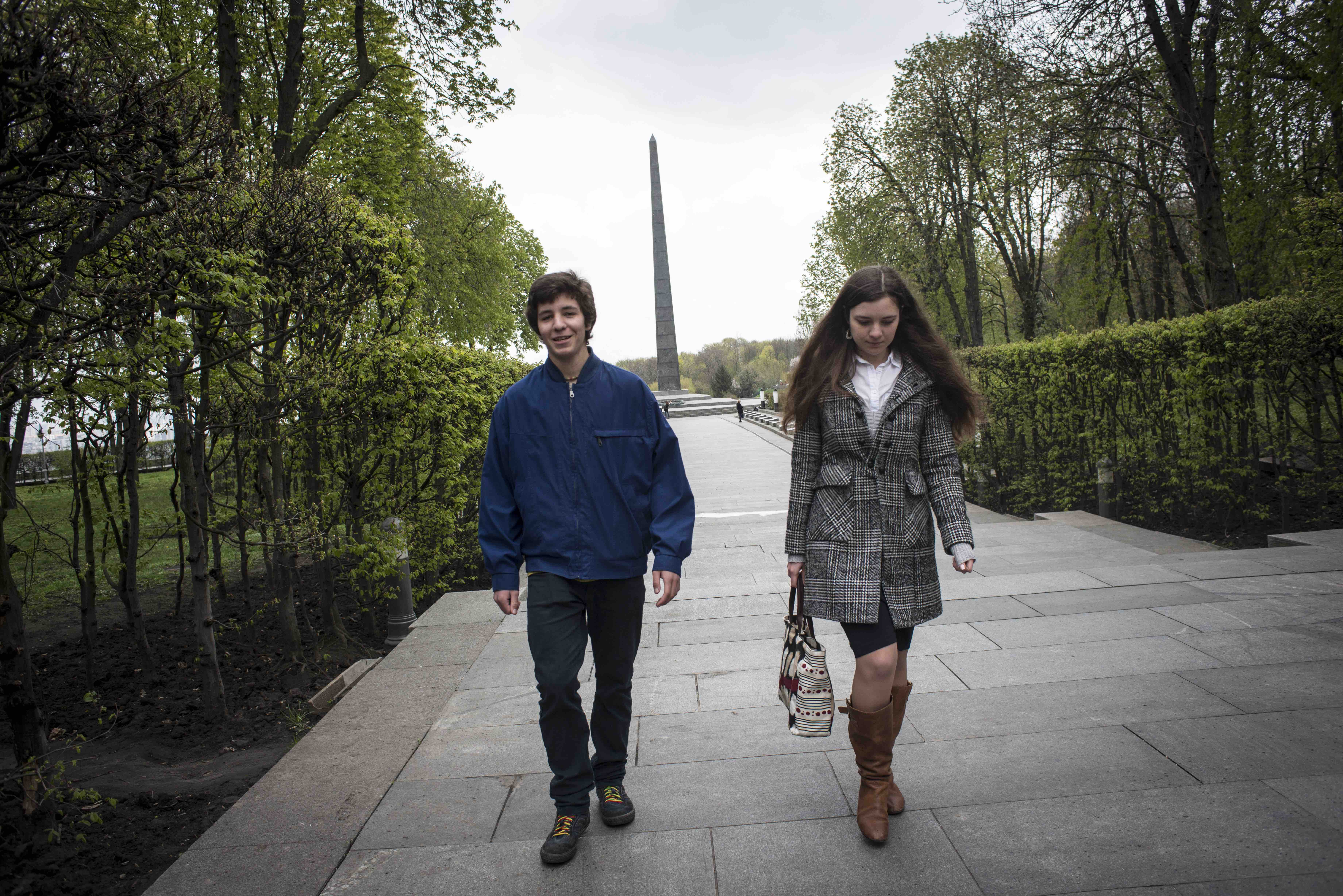 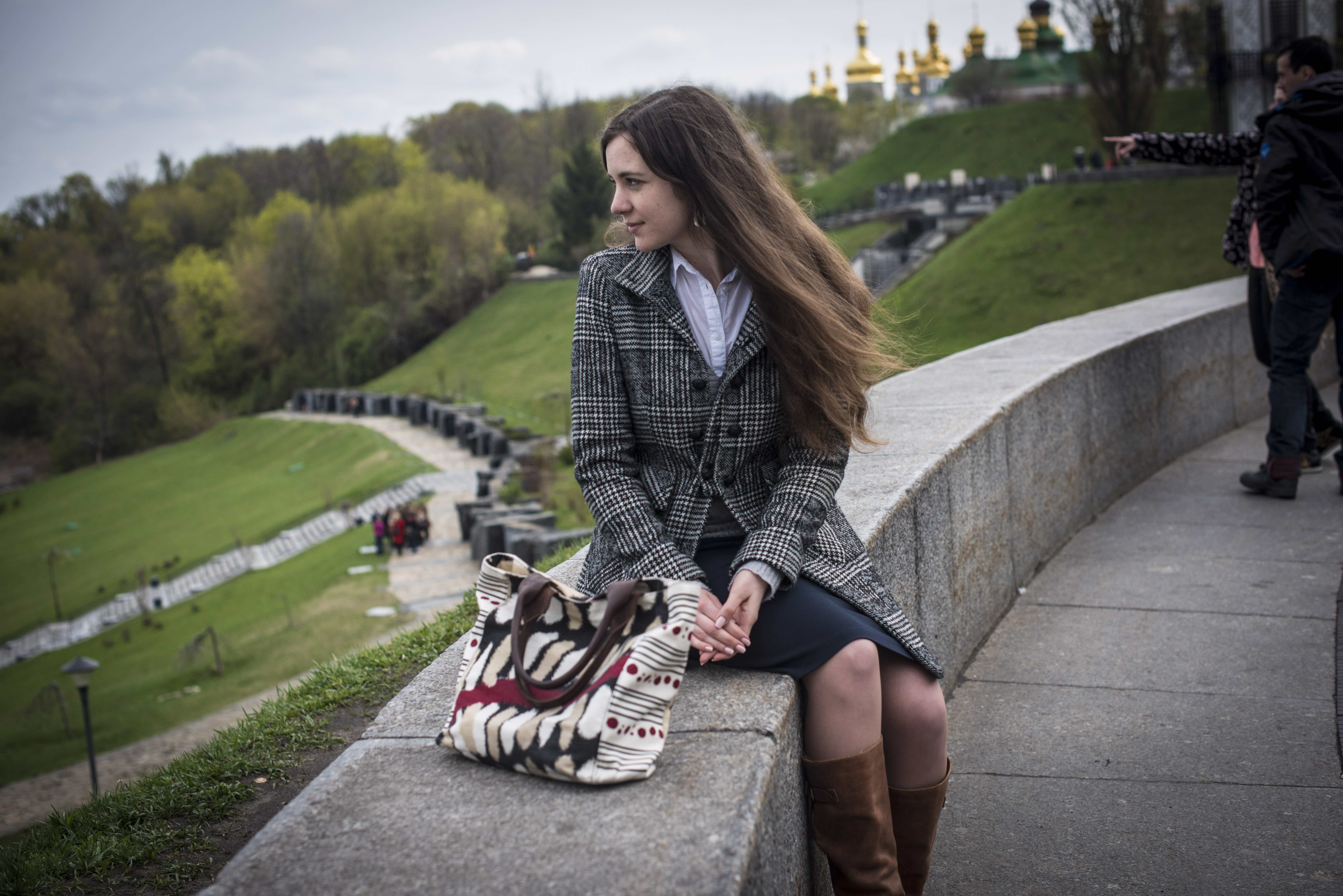 Friends Alona, 26, and Denis, 18, came away from the Maidan protests with mixed feelings. Alona had been waiting for four years to protest a government she saw as corrupt. “It was not an open dialogue,” says the social scientist. “Now I feel exhausted, living in a place that is so tense. When Yanokovich was here I knew where to go – Maidan. Now I don’t know what to do. But I know I want to stay. Before I wanted to emigrate to the EU, but now there is a future, so I want to stay and make a life here.”

Denis was in the Maidan when protests erupted and even slept there for several weeks. One day, he ran into a burning building to try and save anyone left inside. “I wanted to go to the higher floors to see if they were clear, but it was too hot.” As the protests continued, several of his teachers urged him to leave the Maidan, eventually ushering him into a taxi to get him away from the fighting. When he got home his parents locked him in his room, but he found a way out and returned to the Maidan. “At first, I went to Maidan because I have been to Europe, I saw that it was beautiful and I wanted something like that in our country. I want to have a non-visa region with Europe rather than Russia. It was purely about the EU at first, but when I was beaten by the Berkut [thugs hired by the government] and saw that no one would be charged, I realised there was corruption here.” 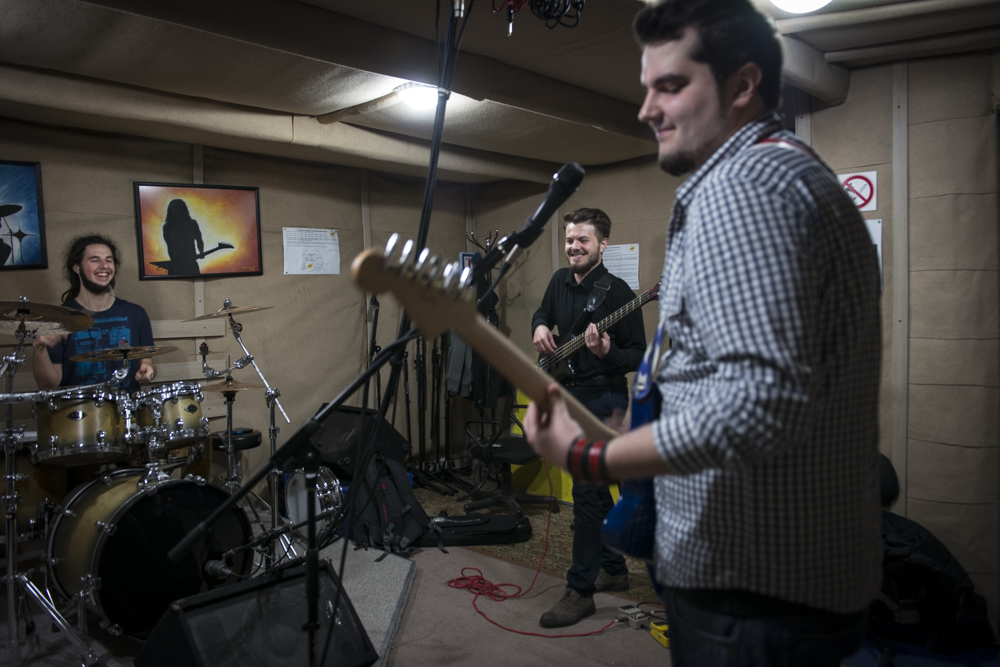 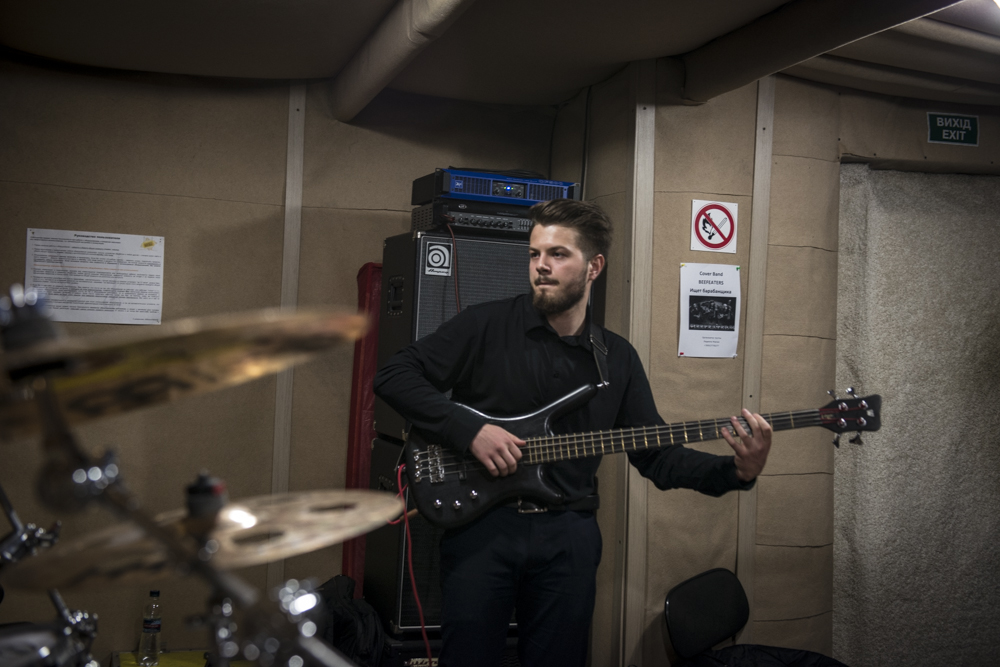 In a small practice space near the university, 22-year-old Yevhen rehearses with his funk-rock group Urban FM. Their lyrics, sung in Russian, comment on social issues like corruption and the apathy felt by youth. One song, ‘Spectator’, tells the story of a person who can only stand by and look on.

“People were getting shot at, it was inhumane,” says Yehven, who sees the government as untrustworthy. “Before Maidan, it was impossible to hold transparent elections, brute force was the only way to change that. But it’s so sad, civilised people in the 20th century shouldn’t have to do that. The best thing about Maidan was the change of attitude people had towards things they don’t like. They used to think things wouldn’t change and now people are empowered, acting without leaders to make change. The Maidan mobilised the people in a necessary way. The people needed change and it brought unity.” 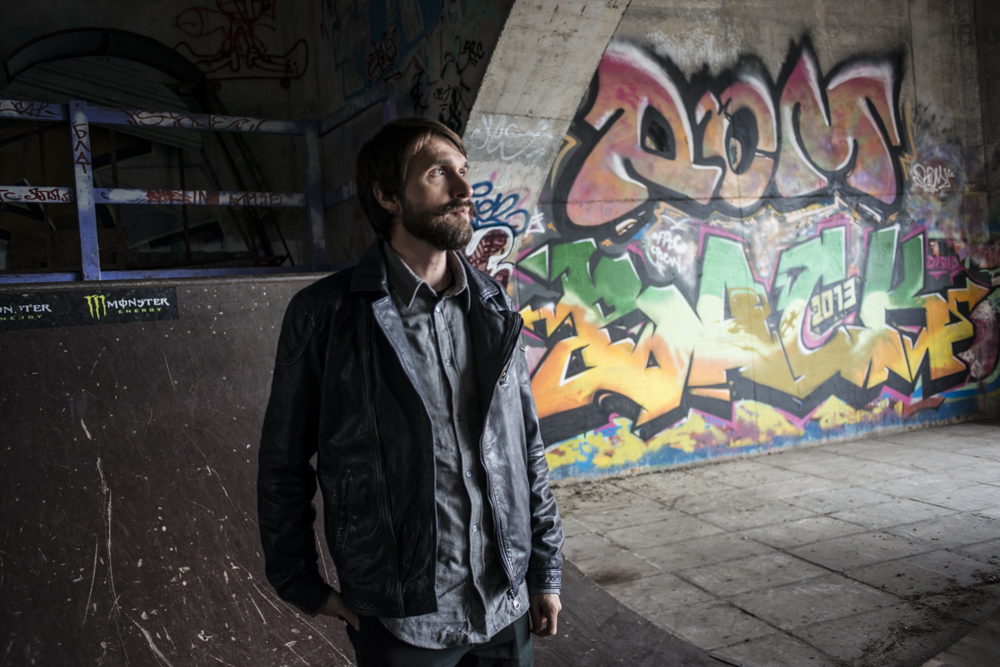 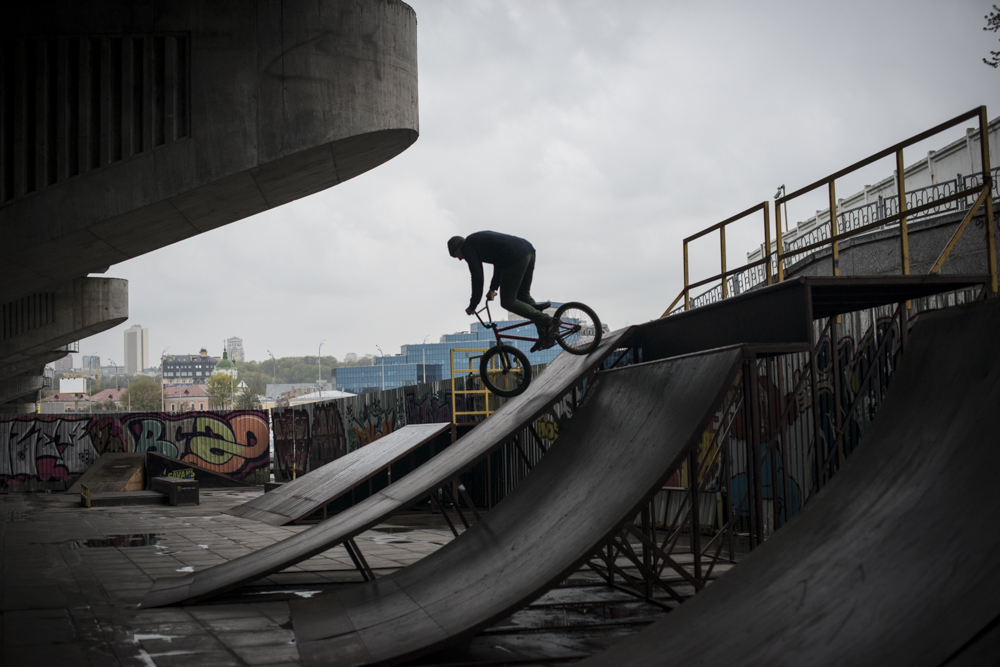 As founder of skate ramp company Kyiv Ramp Bud, Dima helped build Kiev’s best skatepark and says that the Maidan has a special place in the city’s burgeoning skate culture. “Maidan was the first place anyone skated in Kiev when it was remodelled in 1995. Now there are over 1,500 skaters in Kiev. Before the protests, Maidan was a great place to skate as it had smooth marble and many sets of stairs. But now it is finished. Maidan is too emotional.”

This article appears in Huck 44. Buy it in the Huck Shop or subscribe to make sure you never miss another issue.

Linkedin
RELATED ARTICLES
OTHER ARTICLES
Photographer Becky Tyrell went down to the fading banger and stock raceway to meet a community desperate to keep it alive.
Since 2007, Gideon Mendel has made 20 trips to document floods in 13 countries. The result is an alarming record of what has already been lost to the climate emergency.
Following the release of his debut single, Deyaz talks battling addiction, dealing with his struggles through music, and building a budding music career from his living room.
After fleeing the war in Ukraine, people are finding it impossible to secure affordable and decent housing in the UK.
A recent High Court ruling against the right to wild camp in Dartmoor National Park sparked the largest land protest in history – and campaigners say their fight is not over yet.
AI companies that develop image-generators using copyrighted artwork from the internet are coming under fire from artists who say that it amounts to theft.