William S. Burroughs used words to warp our sense of time. And his experimental photography was just as mind-bending as his books.

William S. Burroughs used words to warp our sense of time. And his experimental photography was just as mind-bending as his books.

William S. Burroughs is not a name associated with order. Known for his stream-of-consciousness writing style and obsession with spontaneity, the infamous Beat author had no time for straight lines or predictable ways of thinking. His pioneering ‘cut up’ and ‘fold in’ techniques – which saw him chopping up his writing and piecing it back together in random order, and which made Naked Lunch (1958) such a head-twister of a novel – fundamentally changed literature by challenging the idea that stories should unfold chronologically. But there was always more to Burroughs than just mind-bending books.

Burroughs was a prolific photographer, shooting and manipulating images throughout his long and storied life. But he had no respect for photography as an artistic medium and was instead seduced by the camera’s power for destruction.

Like the pen and his infamous .38 – the gun he used to kill his wife in a drug-fuelled game of William Tell – the camera was a weapon, which he wielded like a voodoo priest. In an interview with Daniel Odier, quoted in Odier’s The Job, Burroughs said: “This simple operation – making recordings and taking pictures of some location you wish to discommode or destroy… will result in accidents, fires, removals.”

He took photographs of buildings he wanted to attack – like the unsuspecting Moka Bar in London, which he shot to the point of extinction. In 1972, offended by the trendy coffee shop’s “unprovoked discourtesy and poisoned cheese cake”, Burroughs photographed Moka repeatedly, creating audio-visual mash-ups which he then played on the street, day after day, to the point of suicidal irritation. His experiment in art-torture eventually succeeded: in October 1972, Moka closed down.

It’s no secret that Burroughs regularly flirted with chaos. As Barry Miles writes in Taking Shots: “His work is [a] fight against control systems: establishment values embedded in everyday language, thought and action; control exercised by the state, by religion, by the authoritarian family, by school… sexual orientation, conformity and loyalty.”

His gonzo visual experiments had been unfolding for years. In 1962, at the Beat Hotel in Paris – the hotbed of creative dissent where Burroughs wrote Naked Lunch – he translated his cut-up literary techniques into the language of photography, repeatedly shooting and reshooting his own pictures to create kaleidoscopic mosaics. If the photography establishment aimed to capture singular moments – or Henri Cartier Bresson’s ‘decisive moment’ – Burroughs trained his lens to warp our sense of time.

In a memorial talk on Burroughs’ birthday, Iain Sinclair – whose book American Smoke is a personal journey in search of the Beats – reveals that Burroughs rejected the idea of time as a sequence of events: “[He was] an initiate of the abyss, that black hole at the edge of a linear consciousness. [He] stared at it and it stared right back.” Burroughs was aware that his photography and writing moved forwards and backwards in time. Both could record, but also foreshadow future events, remaining open to new interpretations as the context around them changed.” 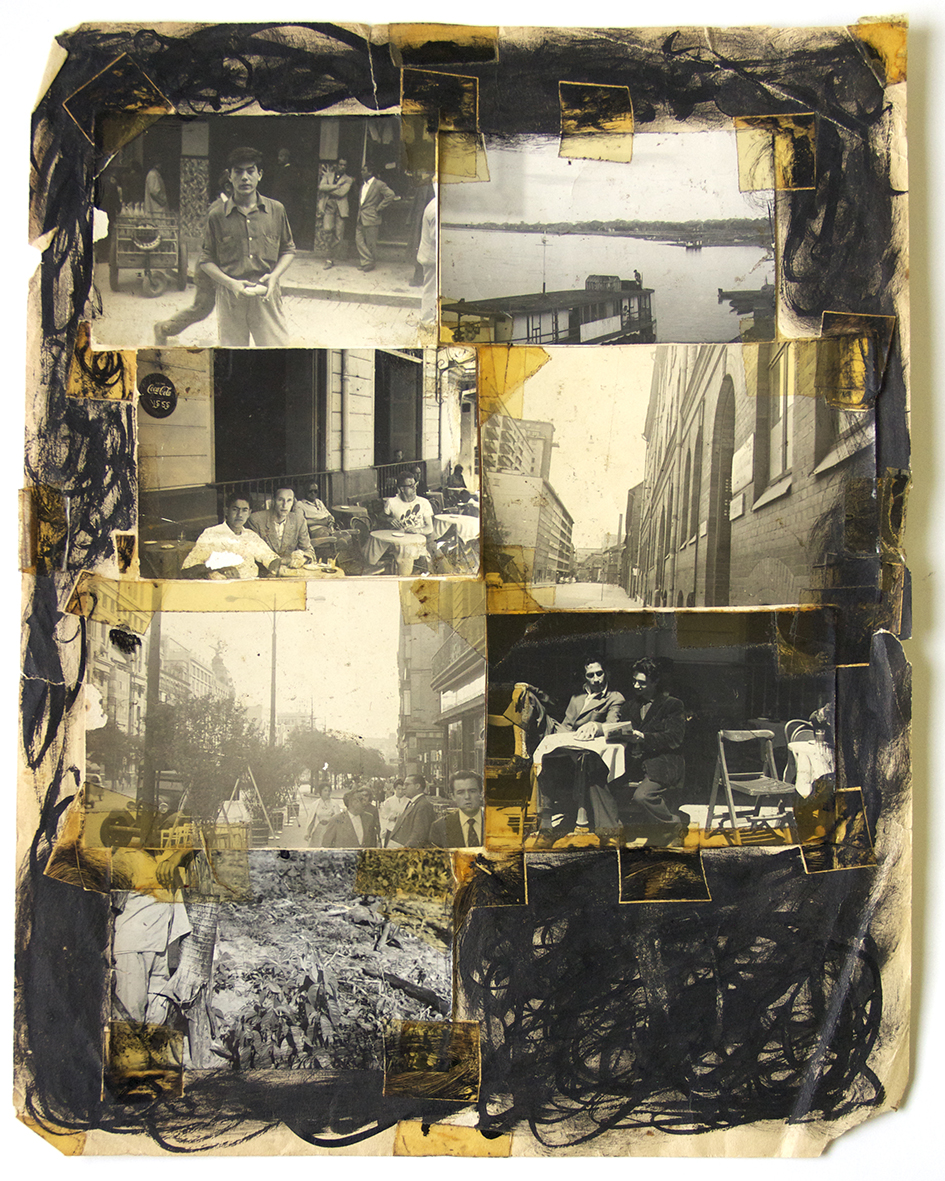 Just like his drug-induced ravings, Burroughs used photographic collages to reflect the non-linear nature of his thoughts. In Untitled, 1953- 56, photos of the hallucinogenic Peruvian Yage vine, Kiki in Tangier and a street in Gothenburg are brought together with menacing black scribbles that appear to represent mental cross-chatter or tangled neurological connections. It’s difficult to see what connects the photos, other than the zigzag geography of Burroughs’ mind.

And it’s difficult to second-guess what Burroughs was trying to convey. But as a window into his psychological state, these photos – no matter the intention – reveal the creative process behind some of the most original and controversial writing of the twentieth century. As Iain Sinclair says: “They suck his presence back into the room. That is why I think he is a pilot, an interpreter, finding methods to break out of the format of control and allow the photograph to move in new and unique ways.”

Taking Shots: The Photography of William S. Burroughs, by Patricia Allmer and John Sears, is published by Prestel in association with The Photographers’ Gallery

This article appeared in Huck 43 – Street Photography with Boogie. Subscribe to make sure you never miss another issue.

Linkedin
RELATED ARTICLES
OTHER ARTICLES
The action took place in response to the 200 asylum-seeking children who were placed in hotels run by the Home Office who have gone missing.
A new podcast is opening up the conversation between trans women and trans amorous men in the hope of building coalitions.
AI companies that develop image-generators using copyrighted artwork from the internet are coming under fire from artists who say that it amounts to theft.
Photographer Sean Maung reflects on documenting a small town in Pennsylvania afflicted by high levels of unemployment, poverty, violence, crime, and addiction.
Since 2007, Gideon Mendel has made 20 trips to document floods in 13 countries. The result is an alarming record of what has already been lost to the climate emergency.
A new exhibitions brings together the work of photographers who documented the deep unrest of these pivotal decades.