Art & Culture / Photography / ‘Women have only one way to survive: learning to fight’ 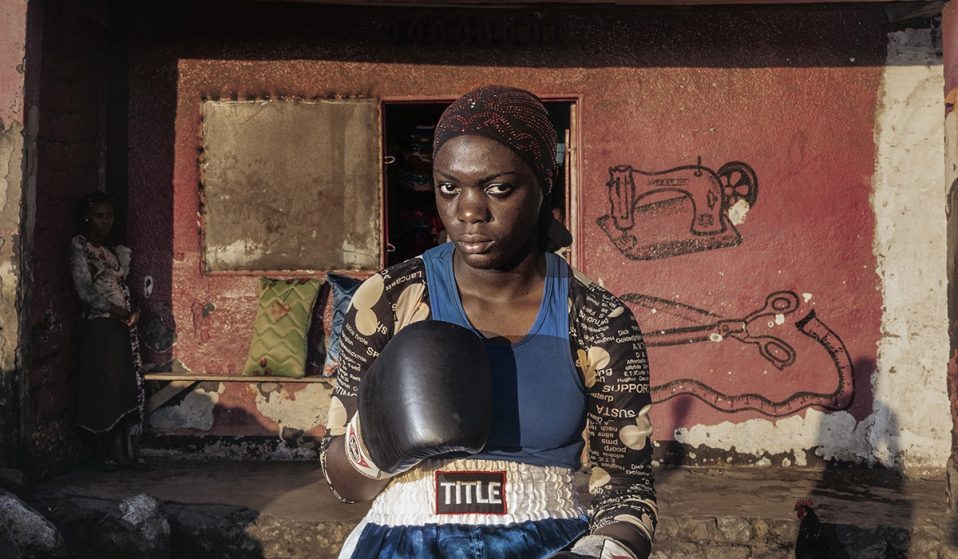 For decades, rape and other forms of sexual violence have become endemic in the DRC. In a new portrait series, photographer Alessandro Grassani captures the women who are finding strength through boxing.

For decades, rape and other forms of sexual violence have become endemic in the DRC. In a new portrait series, photographer Alessandro Grassani captures the women who are finding strength through boxing.

The Democratic Republic of Congo (DRC) has endured decades of widespread sexual violence by government forces and militia groups – especially in the eastern conflict zones. Unsurprisingly, those most affected are women and children.

Widely dubbed the ‘rape capital of the world’, the city of Goma, capital of the DRC’s North Kivu province, is one of the world’s worst places to be a woman. Yet against this backdrop of daily violence and injustice, women are donning boxing gloves and learning to fight.

Photographer Alessandro Grassani landed in the DRC for the first time on assignment for an Italian NGO called AVSI, which runs several clinics in the region to provide support for the most vulnerable, specifically women who have been victims of violence. While documenting the NGO’s work, he had the opportunity to meet and converse with these women, hearing firsthand about the horrific violence they had experienced.

“I was so impressed by their stories, particularly by their desire to react and forget this dramatic past, that I felt the need to work on a story about women in the DRC, without reducing them to victims of any sort of injustice,” explains Grassani. “Instead, I wanted to represent them as protagonists of their own destinies.” 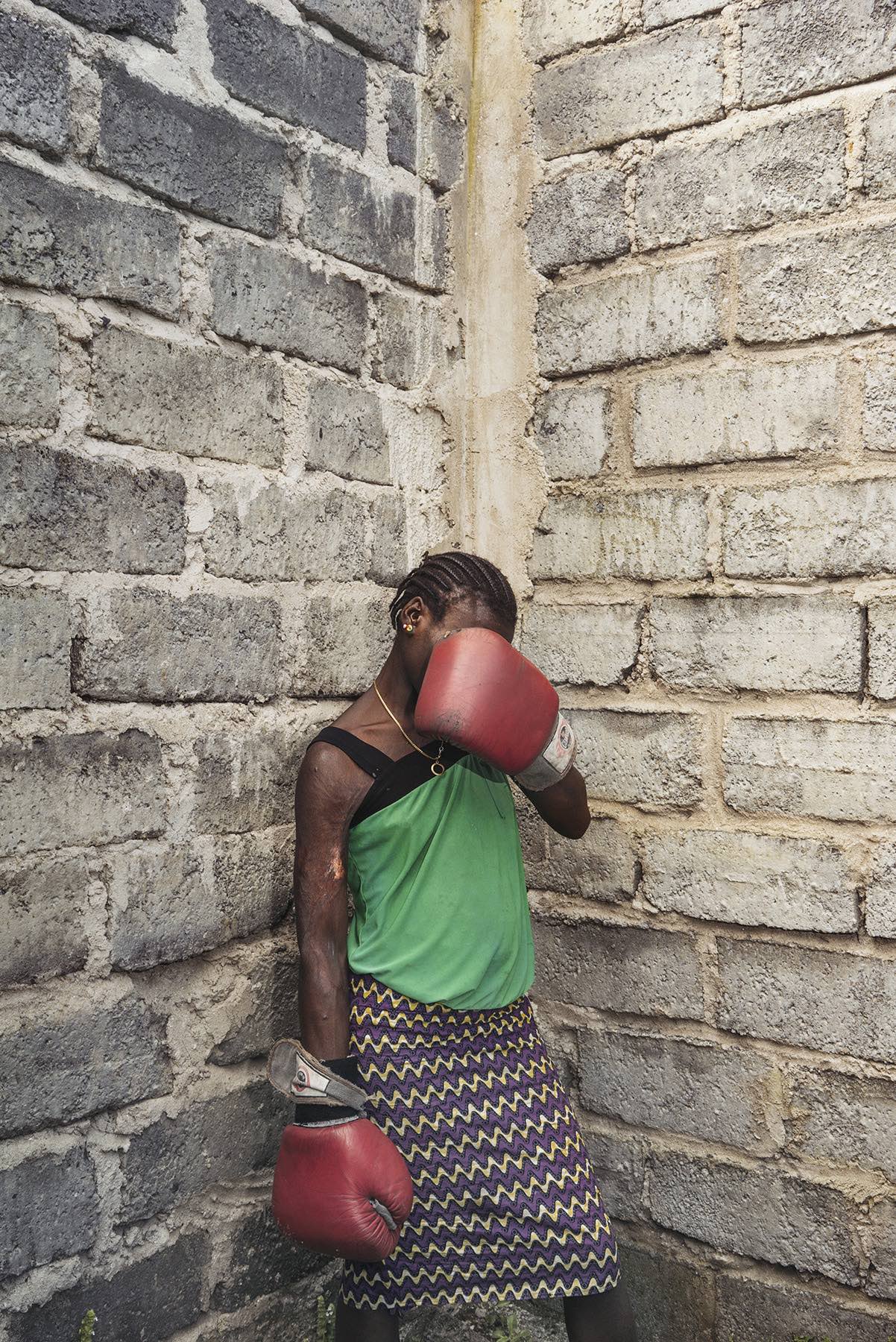 Democratic Republic of Congo. Goma. 28/05/2018. 18 year-old Blandini portrayed on the building site where she occasionally spend her nights. She trains in the so-called Friendship Boxing Club.

Grassani knew about the women boxers before arriving in the DRC, but it was only when he was in Goma himself that he realised focusing on this story was the right choice.

Accompanied by writer Carlo Marsilli, Grassani spent 10 days in the DRC, during which time he paid several visits to the boxing clubs, mainly The Club de l’Amitié (The Friendship Club), situated inside Les Volcans stadium and the Radi Star Girls Club.

The Friendship Club is run by coach Balezi Bagunda (aka Kibomango), a Congolese ex-child soldier and ex-boxing champion. Abandoning the ring to dedicate himself to teaching boxing, his club now accommodates a group of women who have found hope and passion in boxing.

“The spirit of the club is that of a family,” says Grassani, “and in a certain sense, Kibomango is the father who, through sport, helps his members have a purpose and objective in life.”

The Radi Star Girls Club is an all-woman boxing club captained by coach Gabriel Moke, an ex-amateur boxer who trains his daughters, granddaughters and other girls living in the vicinity.

“Some of these female boxers are boxing for passion, some to become a champion, some to find a purpose in life and abandon street life, but all of them are boxing to feel stronger and more prepared to face their everyday life and be able to defend themselves,” says Grassani. 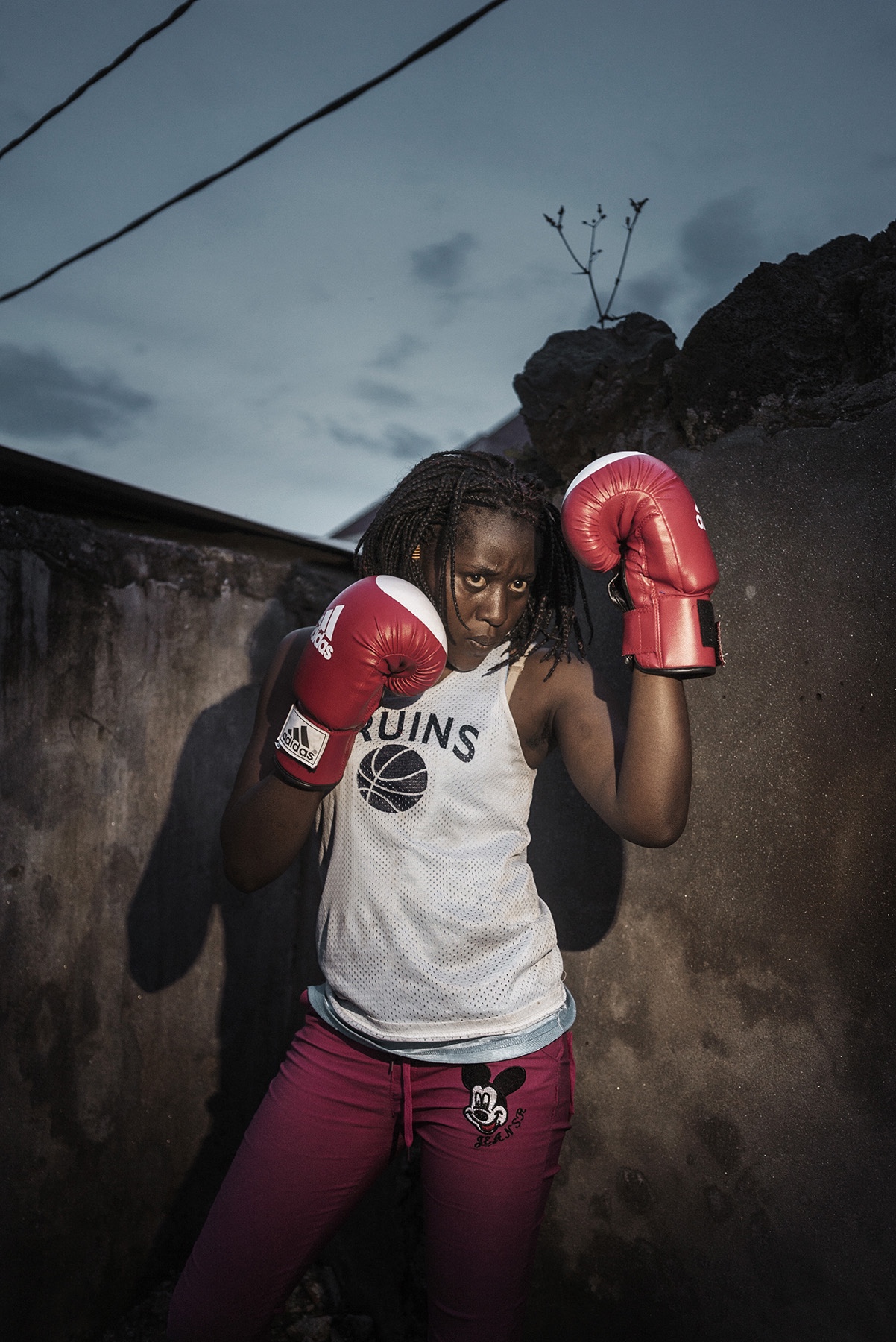 “I asked each of the women if there was a link between the violence of the place they live and their boxing practice, and to tell it in the words of one of the boxers I met, this is the answer: ‘women here have only one alternative to survive: learning to fight.’”

Frequently, Grassani was met with stories of horrific violence. He recalls one story in particular of a woman named Blandini, who has been living on the streets since she was abandoned by her family. One night she was raped, covered with petroleum and set alight by a group of men. Now, burns cover her body, a perpetual reminder of that night. In the DRC, stories like Blandini’s are not uncommon.

Despite these societal pressures, Grassani says that, “at the official boxing clubs and the Radi Star Boxing Club, there are women like Gracia Elga, who has a job and a normal life and her dream is to leave Africa, go the USA to become a champion like Mohammed Ali, earn enough money and then return to Goma and open an orphanage for the local abandoned kids.”

Listening to stories like Gracia and Blandini’s was fundamental to the project and helped build trust with the women. “I’m not the kind of photographer who thinks he’s found the story and the subject to photograph. On the contrary, I believe that there was a ‘meeting’ between us and that these women decided to be portrayed by me because they trusted me, and the trust they placed in me is equivalent to the respect I feel for them.” 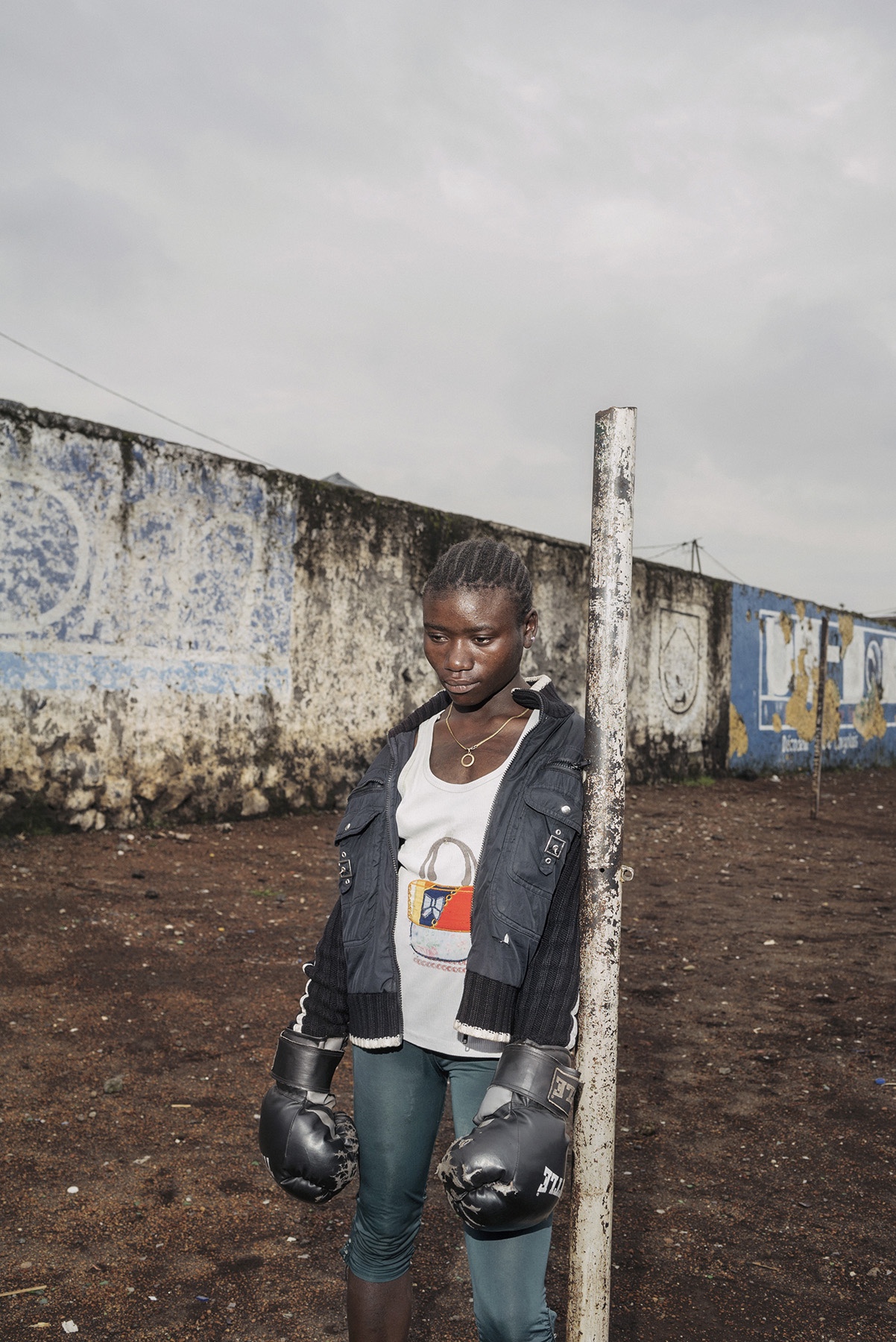 Democratic Republic of Congo. Goma. 25/05/2018. Nadine, 17 years old, portrayed during the daily boxing training session in the old football stadium of the popular district of Birere. 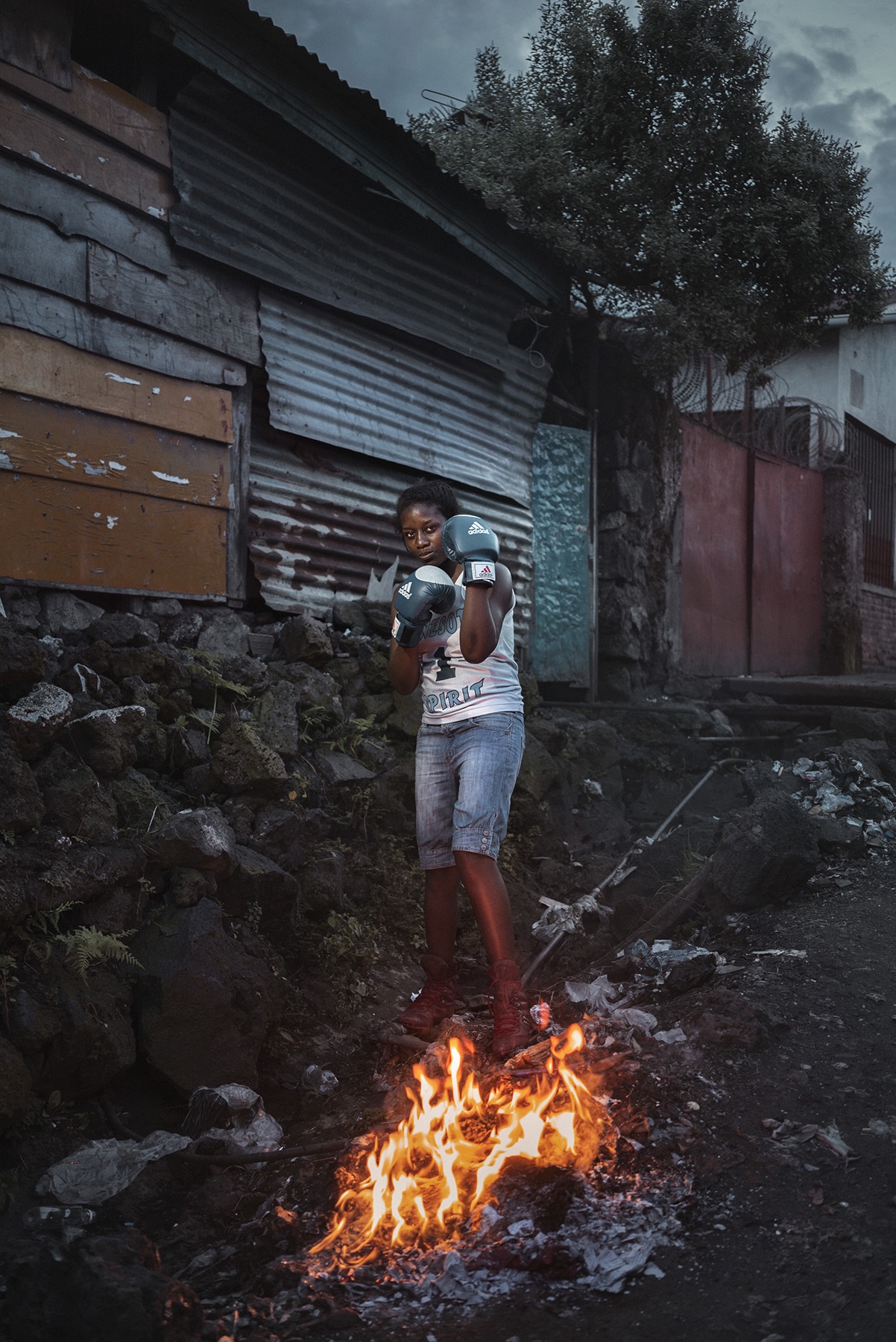 Democratic Republic of Congo. Goma. 24/05/2018. Asitu, 24 years old, portrayed on the streets of Goma just in front of the Radi Star Girls Club. 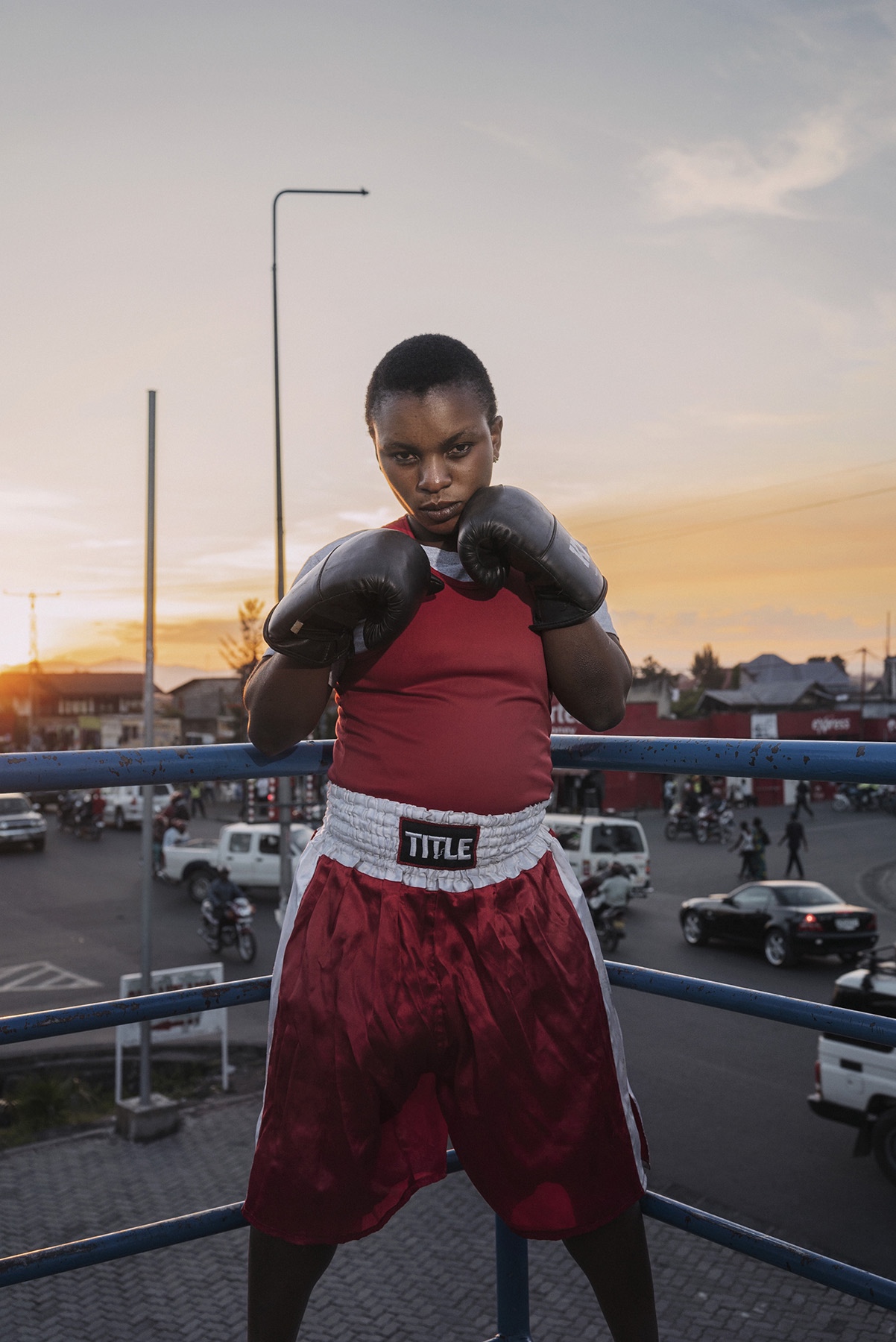 Democratic Republic of Congo. Goma. 29/05/2018. Elysèe, 16 years old. portrayed on the streets of central Goma, She is part of one of the official boxing clubs of the city. 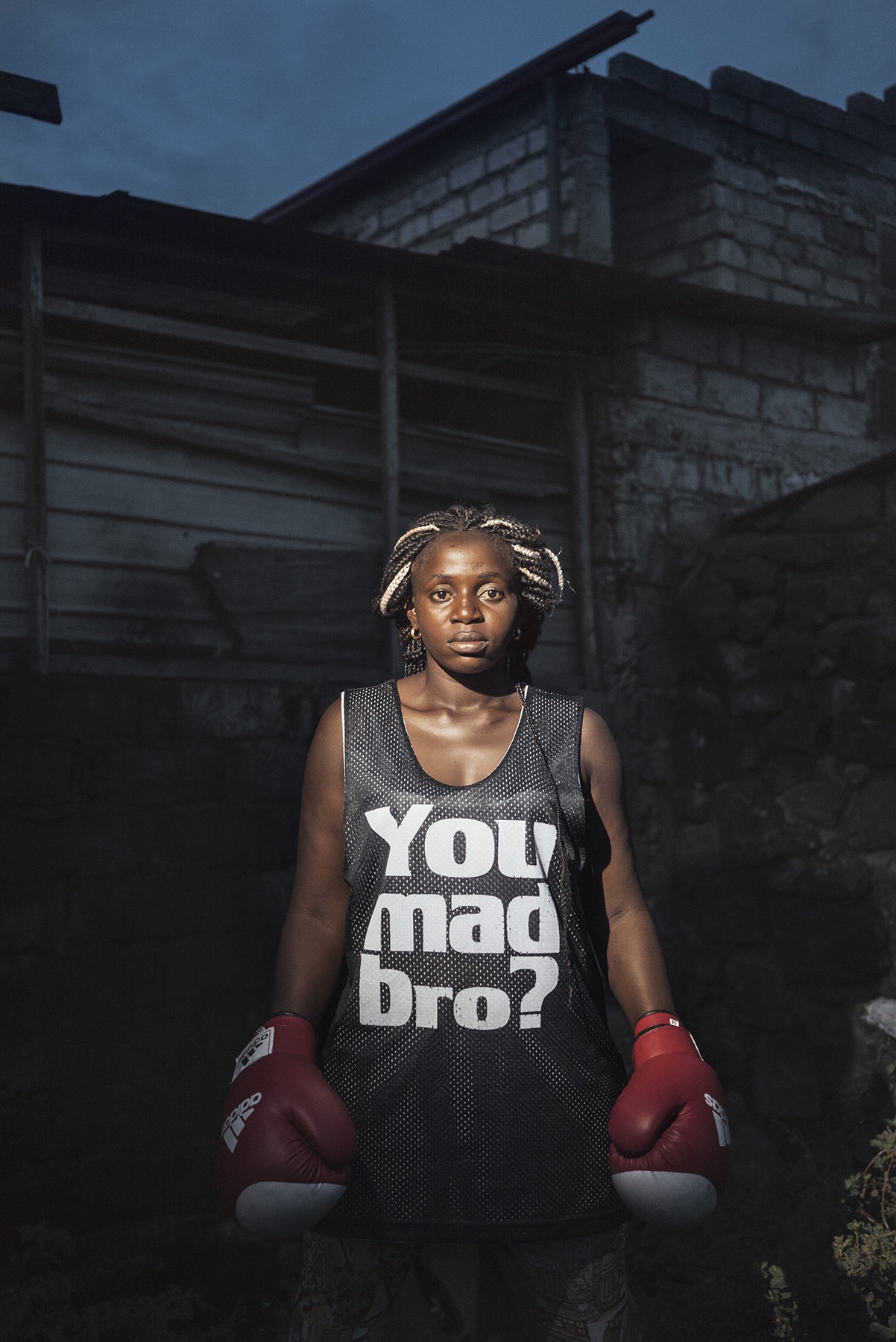 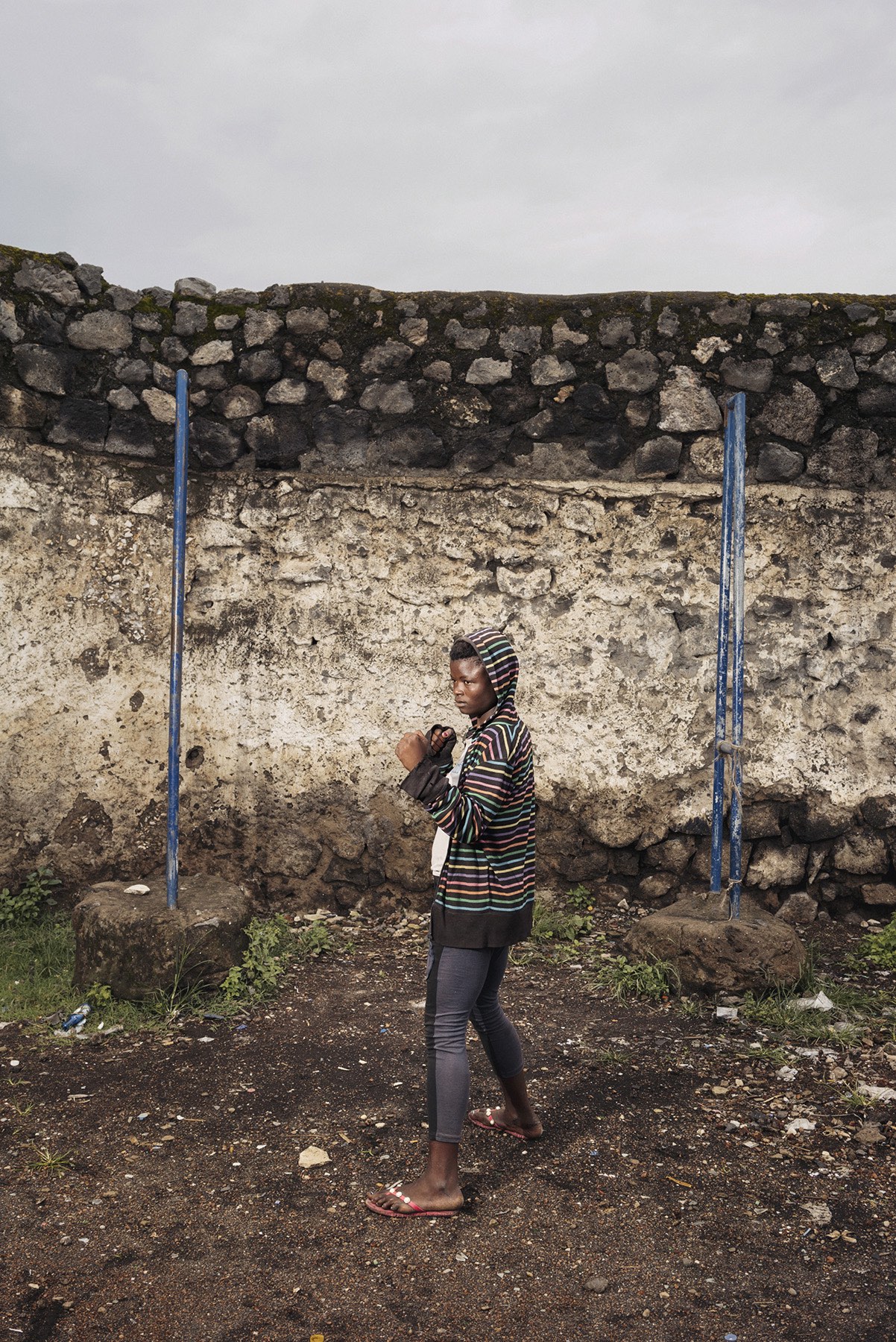 Alessandro Grassani’s series Boxing Against Violence: The Female Boxers of Goma was awarded First place in the Sport category at the 2019 Sony World Photography Awards.

Linkedin
RELATED ARTICLES
OTHER ARTICLES
Finland-born photographer Sirkka-Liisa Konttinen looks back on her decades-long documentation of life in Northern England.
Freddie Miller’s new series of photographs investigates who today’s trainspotters are and what drives their unfettered enthusiasm.
Photographer Arthur Grace recalls travelling through the Soviet Bloc and finding ways to evade the surveillance of his work.
The last few years have seen an increase in LGBTQ-led initiatives to feed the hungry, with many finding ways to stay afloat despite the challenges.
Proposals to introduce a minimum GCSE threshold for student loans will disproportionately affect those from marginalised backgrounds.
Thomas Hoepker‘s images taken during a road trip across America provide a searing social commentary about a divided country.