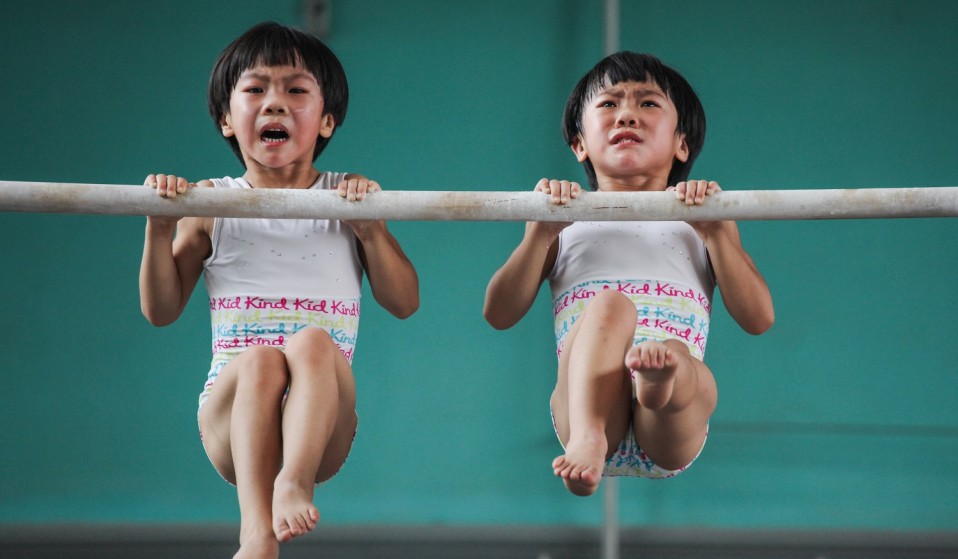 The 2017 Sony World Photography Awards celebrates the best photography from all corners of the globe. We've picked out our favourites from the winners.

The 2017 Sony World Photography Awards celebrates the best photography from all corners of the globe, and we've picked out our favourites from the winners.

It’s been ten years since the launch of the Sony World Photography Awards, a decade since this annual celebration of photographers and their work began. This year, some 227,000 entries were received from over 180 countries, making it the world’s largest photography competition.

Born in Antwerp in 1984, Frederik Buyckx, a freelance photographer for the Belgian newspaper De Standaard, was awarded Photographer of the Year 2017. Buyckx’s images have been published and exhibited internationally and most recently he was shortlisted for the ZEISS Photography Award. 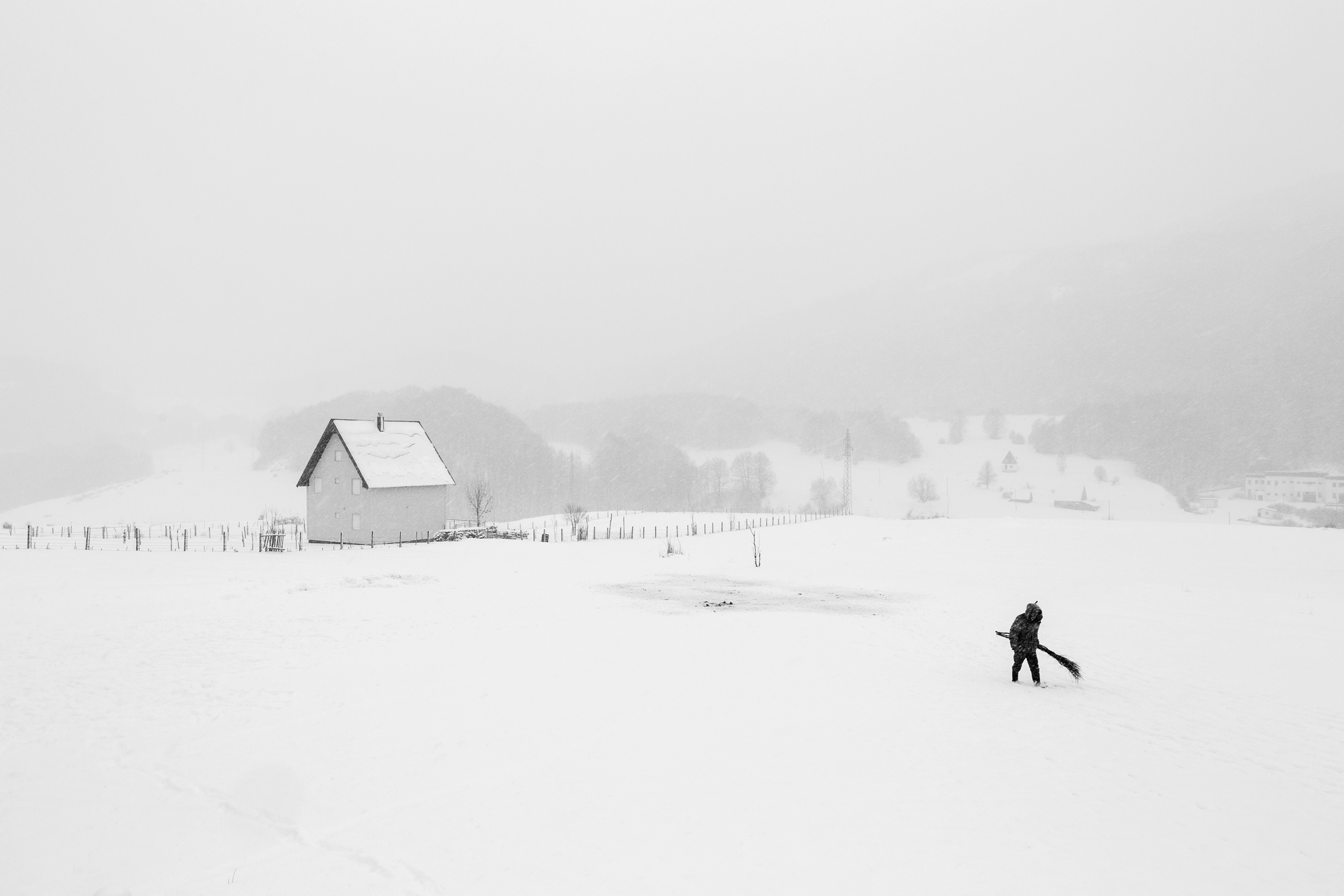 This image of Buyckx’s captures a shepherd in the North of Montenegro walking to his herd of sheep with a self-made broom in his hand. The broom was used to wipe off the snow lying on the back of the sheep.

It’s part of the winning series, Whiteout, which was taken in the Balkans, Scandinavia and Central Asia, remote areas where people often live in isolation and in close contact with nature. 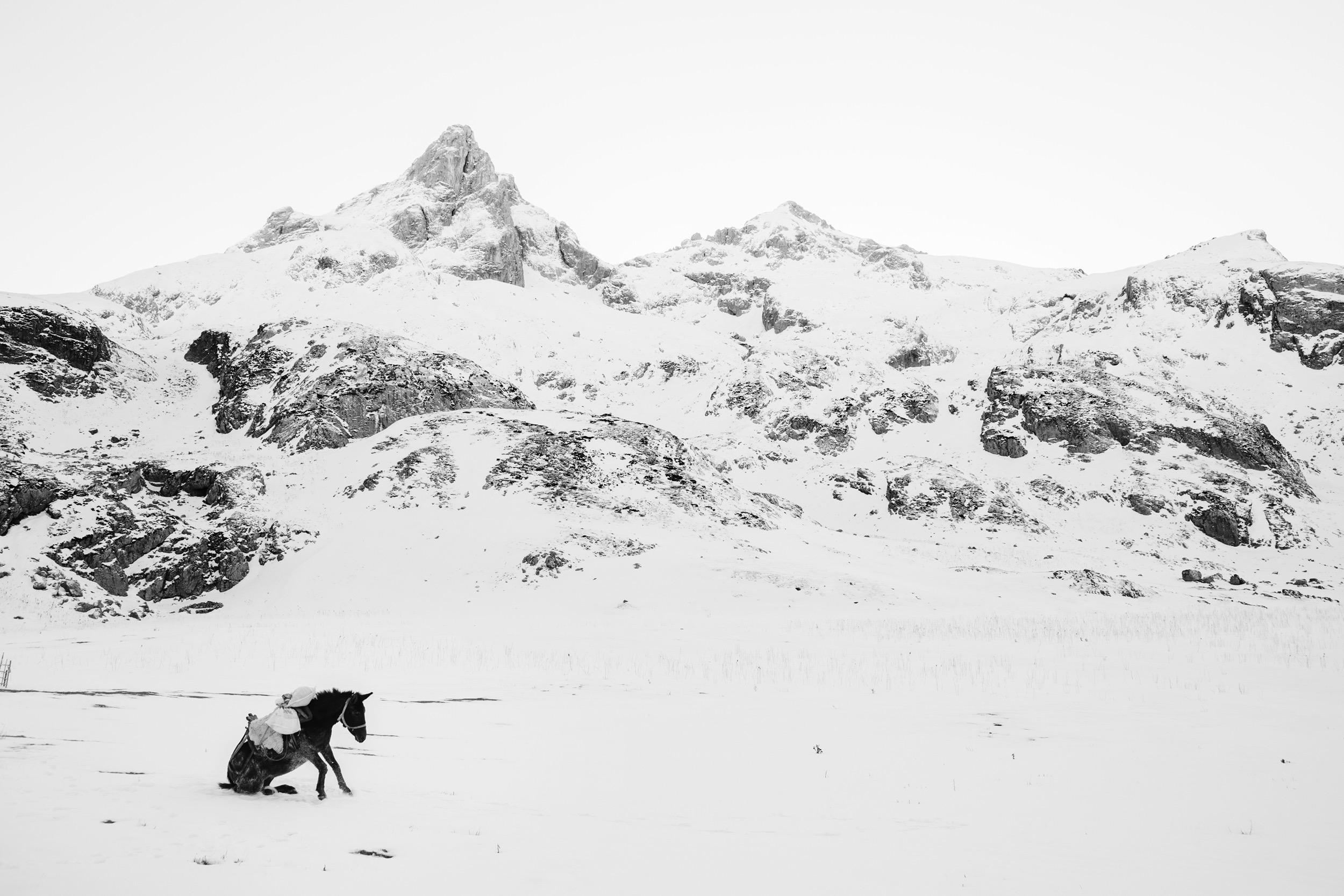 A donkey is getting up after rolling in the snow in the mountains in Albania.

“There is a peculiar transformation of nature when winter comes, when snow and ice start to dominate the landscape and when humans and animals have to deal with the extreme weather,” Buyckx explains. “The series investigates this struggle against disappearance.” It’s a beautiful investigation into the superhuman force of nature. 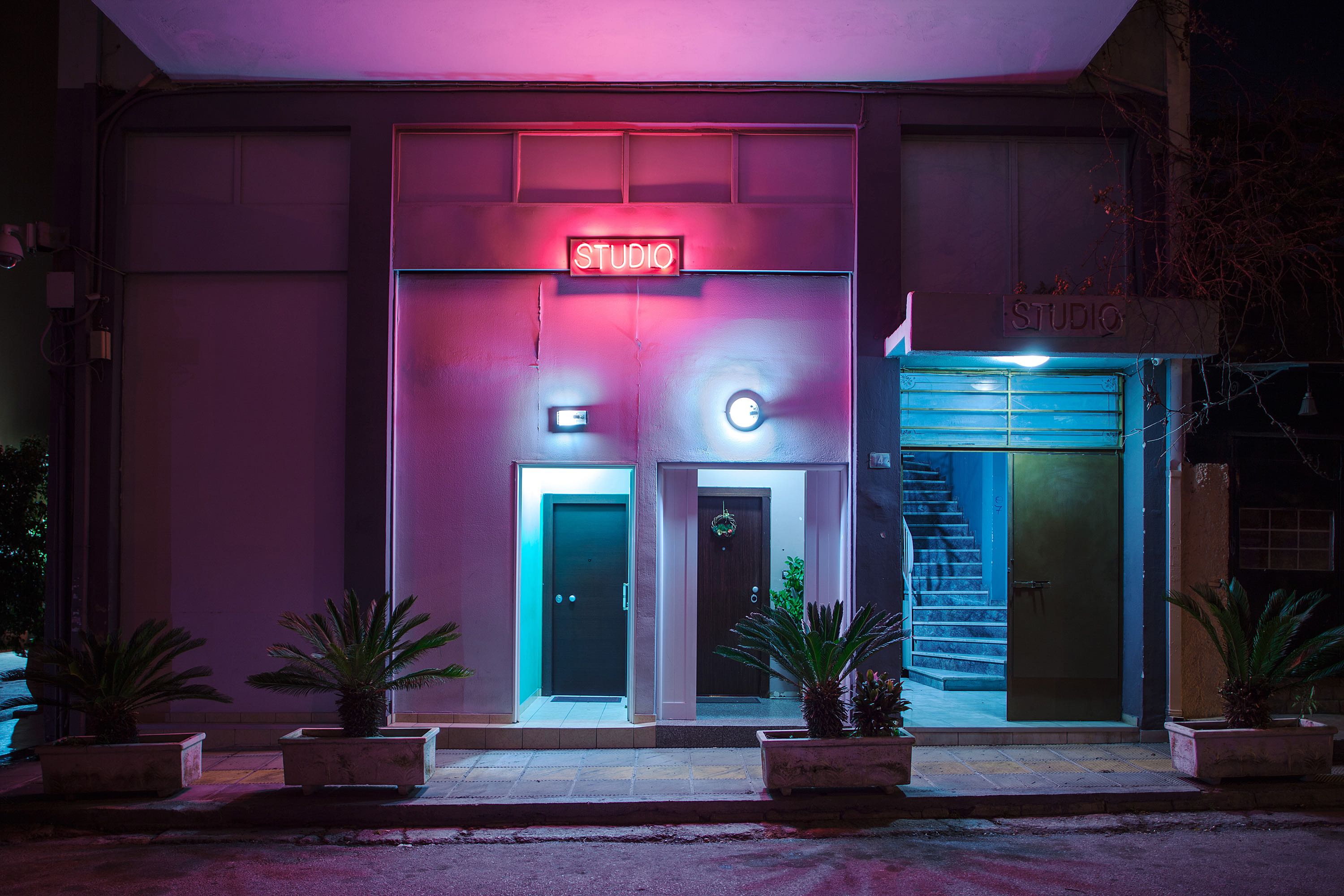 Diego Mayon’s ethereal project, mostly shot at night, has a beautiful Lynchian vibe. Prostitution is legal in Greece and the authorities have decided to stipulate that all brothels must have permits.

There are different kinds of brothels, the upper class ones are called ‘Studios’. A person welcomes the clients and once inside there is a waiting room where the women  come out to show themselves. At this point the clients decide whether to stay or to leave.

These brothels are recognisable by a pink light sign with the word Studio. 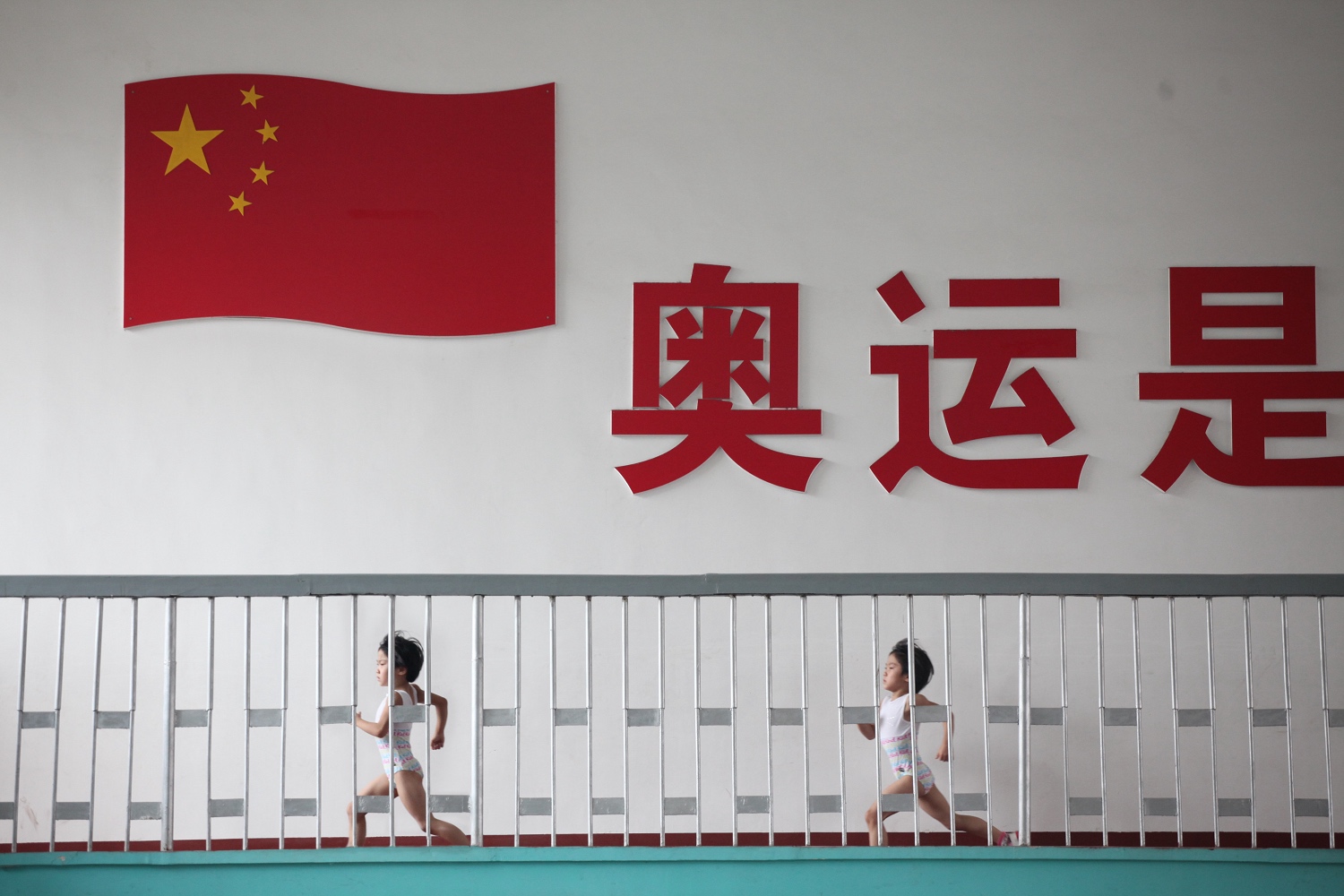 This series was taken in a sports school in Jining in Shandong province, China. Liu Bingqing and Liu Yujie are twin sisters, who have liked gymnastics since their childhood. They have studied, trained and grown up here.

Will Burrard-Lucas: Spirit of the Night 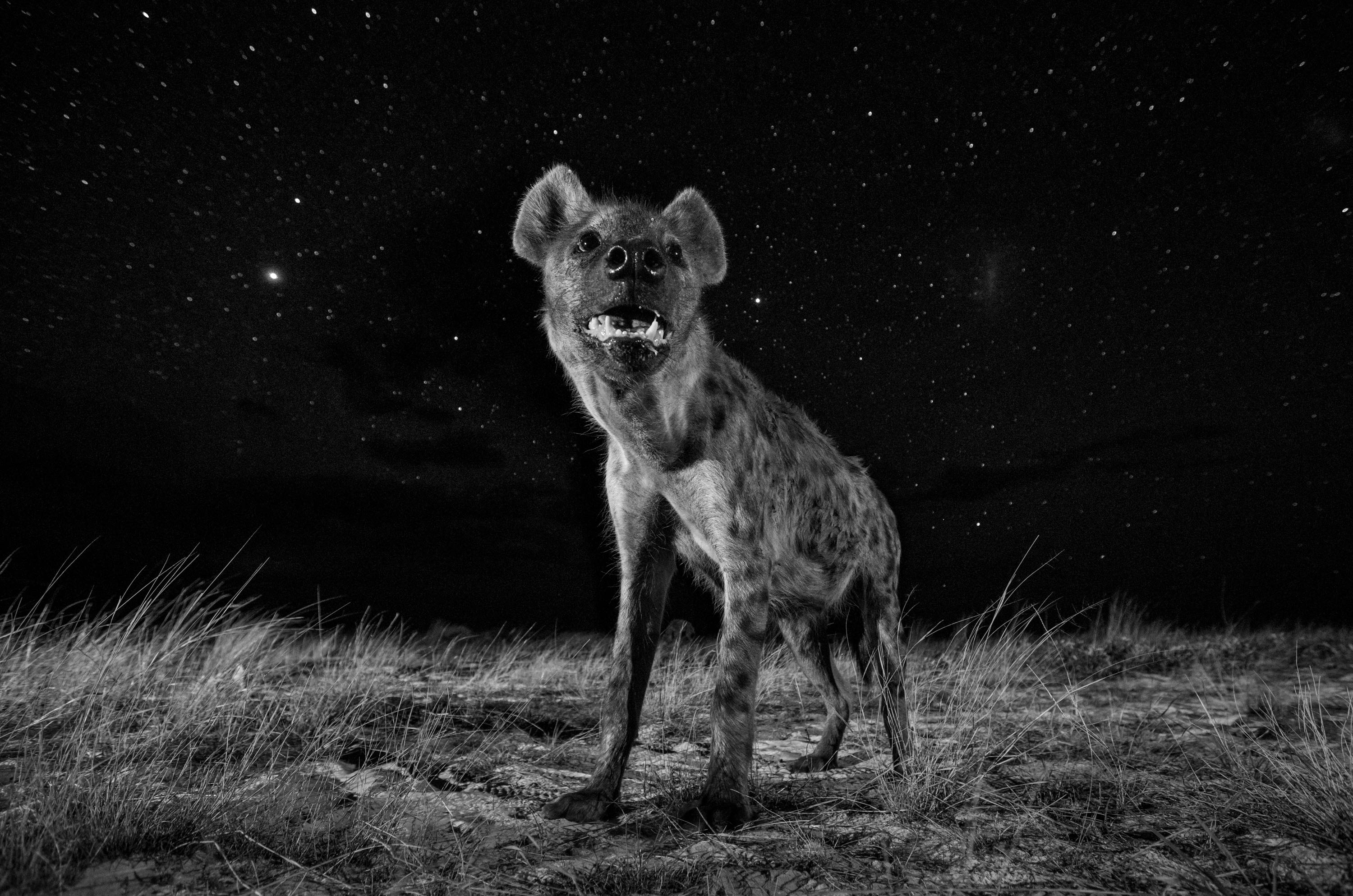 To show hyenas in their element, Burrard-Lucas wanted to photograph them at night. “The stars in Africa are so beautiful that I also wanted to include them in my image,” he explains.

“I used a remote-control ‘BeetleCam’ to position my camera on the ground so that I could photograph the hyena with the beautiful starry sky behind. This is a single exposure. I lit the hyena with two wireless off-camera flashes and used a long shutter speed to expose the stars. Since there was no moon to cause ghosting, it didn’t matter if the hyena moved after the initial flash.”

All of the images were taken in Liuwa Plain National Park, a remote area in the west of Zambia. 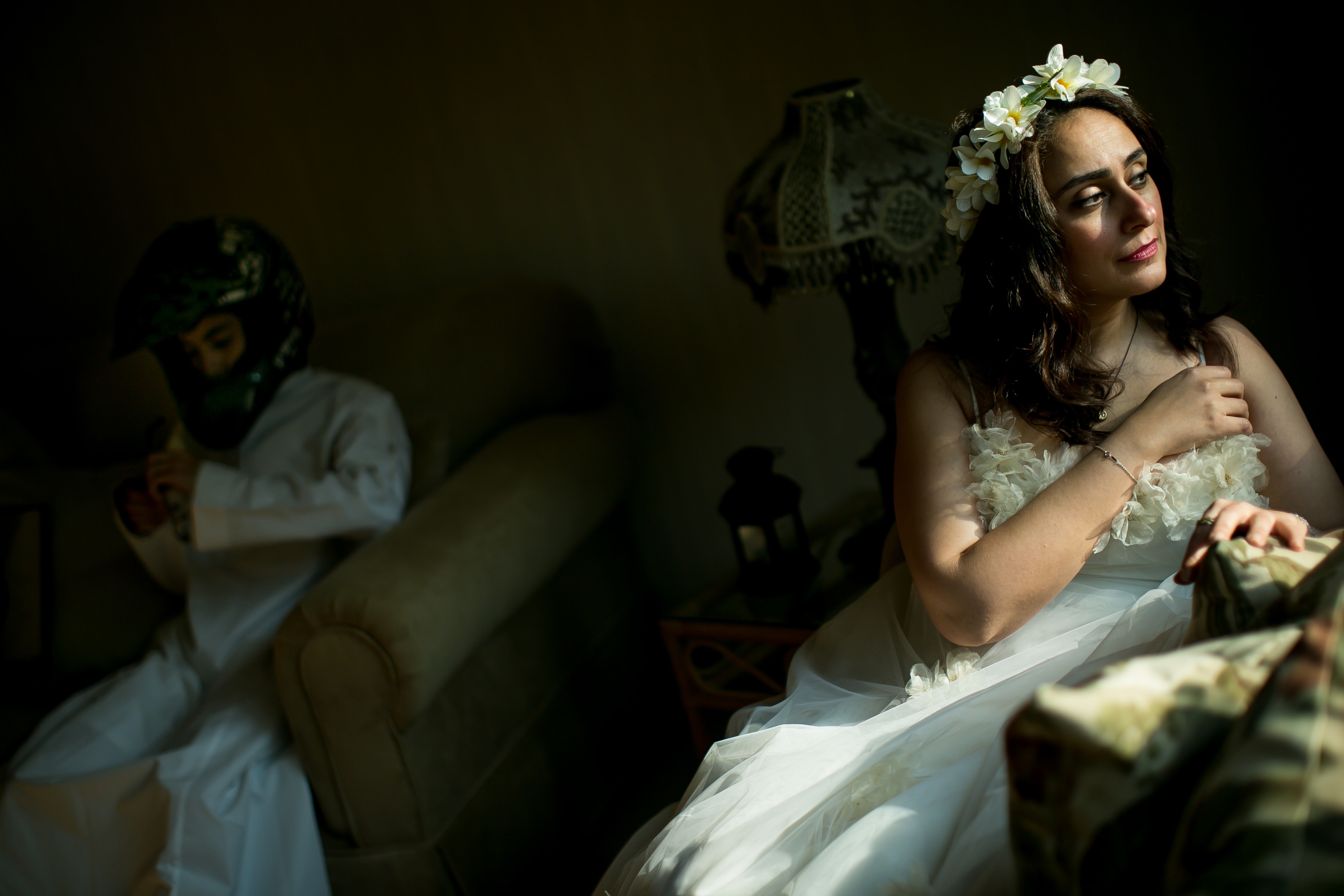 While Saudi Arabia is an international symbol of Islam, many Saudis would agree that there’s a strong disconnect between the Qur’an and local traditions, suggests Tasneem Alsultan. “I wanted to answer questions shared by many, such as, ‘Do we need marriage to signify that we have love?’ and, ‘Do you need a husband to have a meaningful life?’”

“I started the project thinking only about my own personal story. I was married at the age of 17 but living separately as a single parent for the final six years of an unhappy 10-year marriage. Many family members commented on how foolish I was to ask for a divorce. Only later did I realise that there were many Saudi women who had had similar experiences, more than I had expected of typical Saudi housewives.” 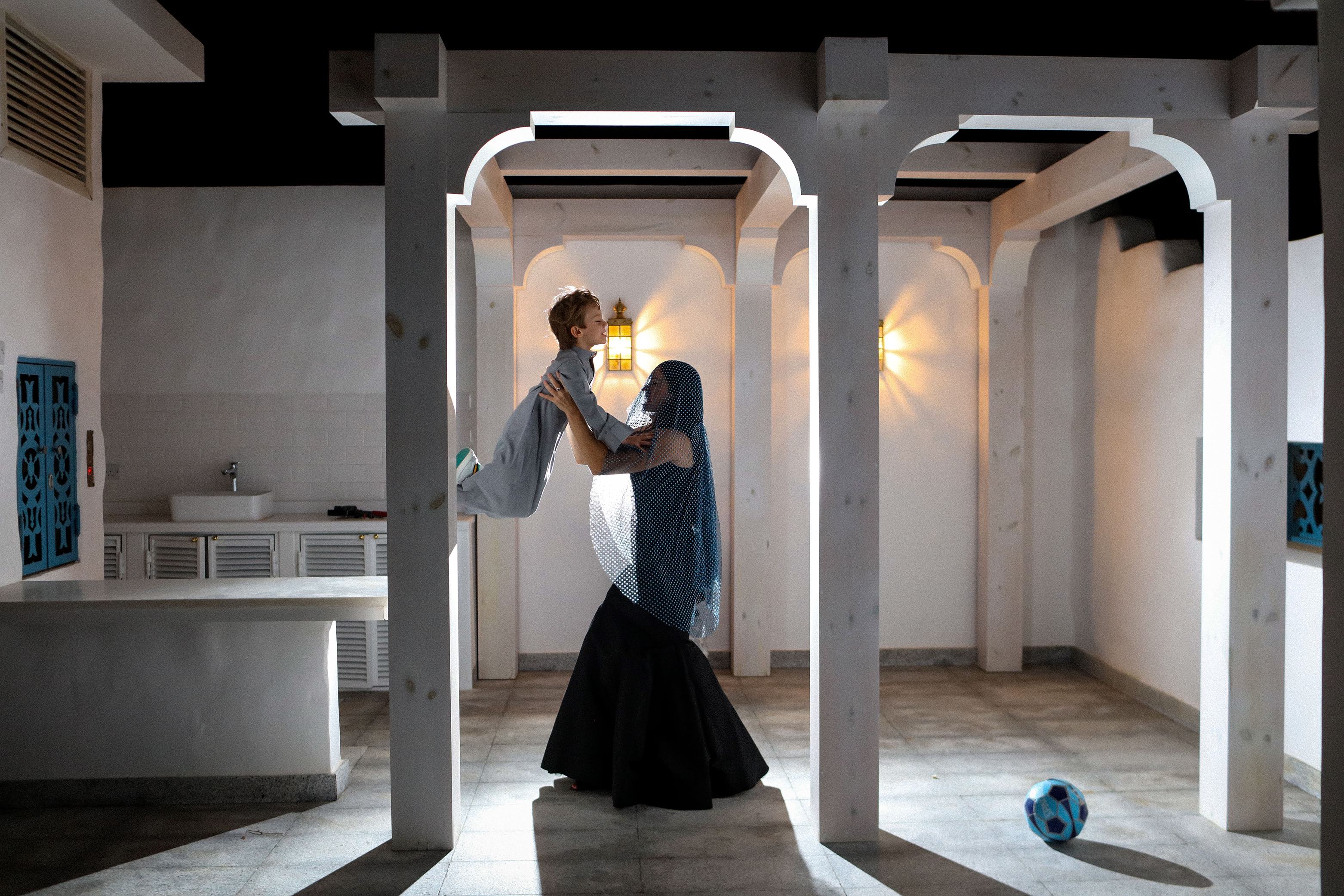 “With each story, I found more women sharing complex marriage theories and experiences. I followed the stories of widows, happily married women, and divorced women. I explored the concept of love, photographing my young daughter and grandmother.” 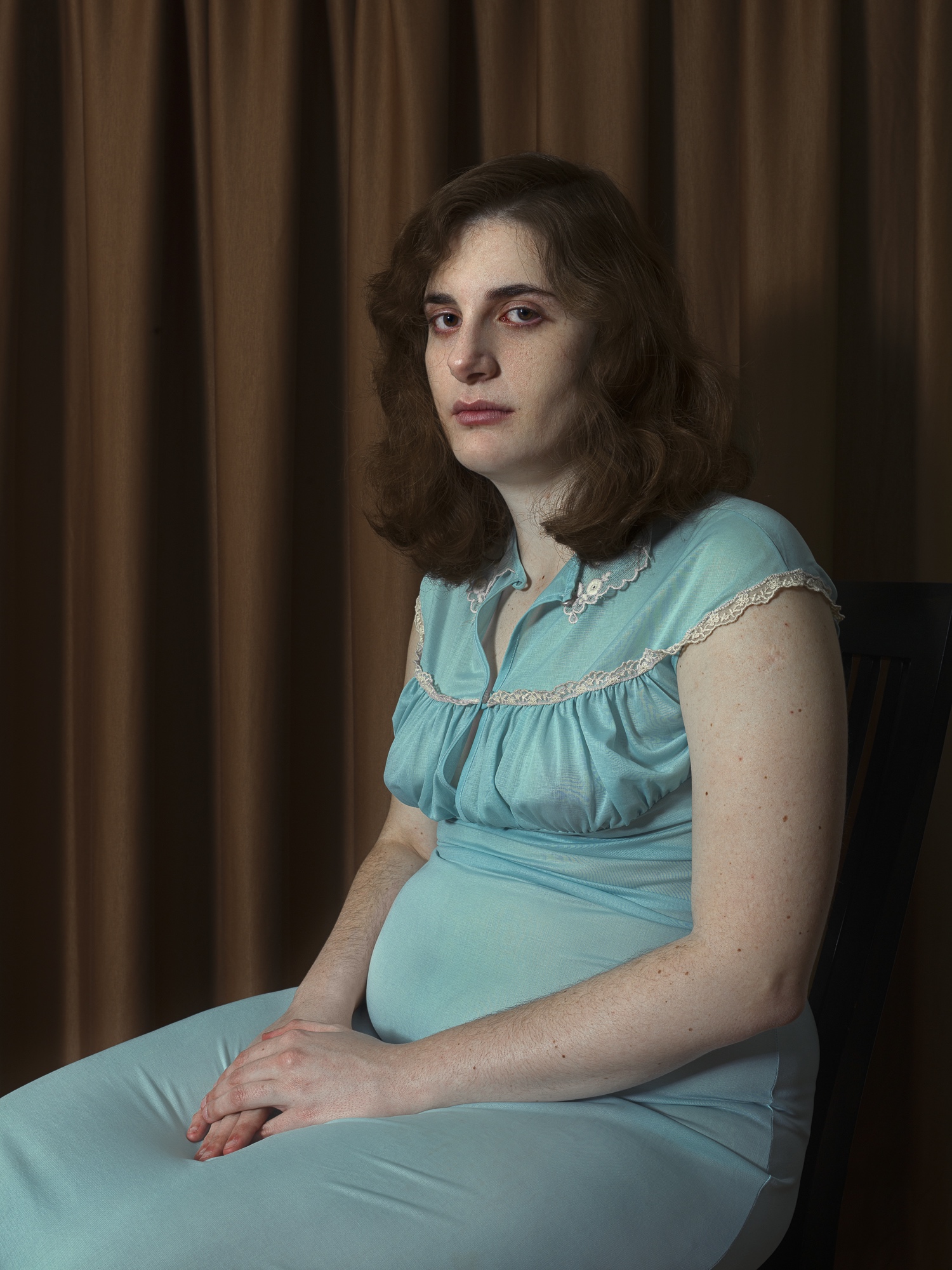 “This project explores the idea of beauty,” explains Ressia. “When I launched the casting for this project the number of applications was incredible. I was very surprised to see how many people that you would have never thought could be interested, showed their enthusiasm for taking part in this.”

“They are not models, they are common people wearing common clothes, but all of them beautiful. I looked for women of all ages, with different measurements, weight and heights. Women with complexities, not pretentious; self-confident and honest women.” 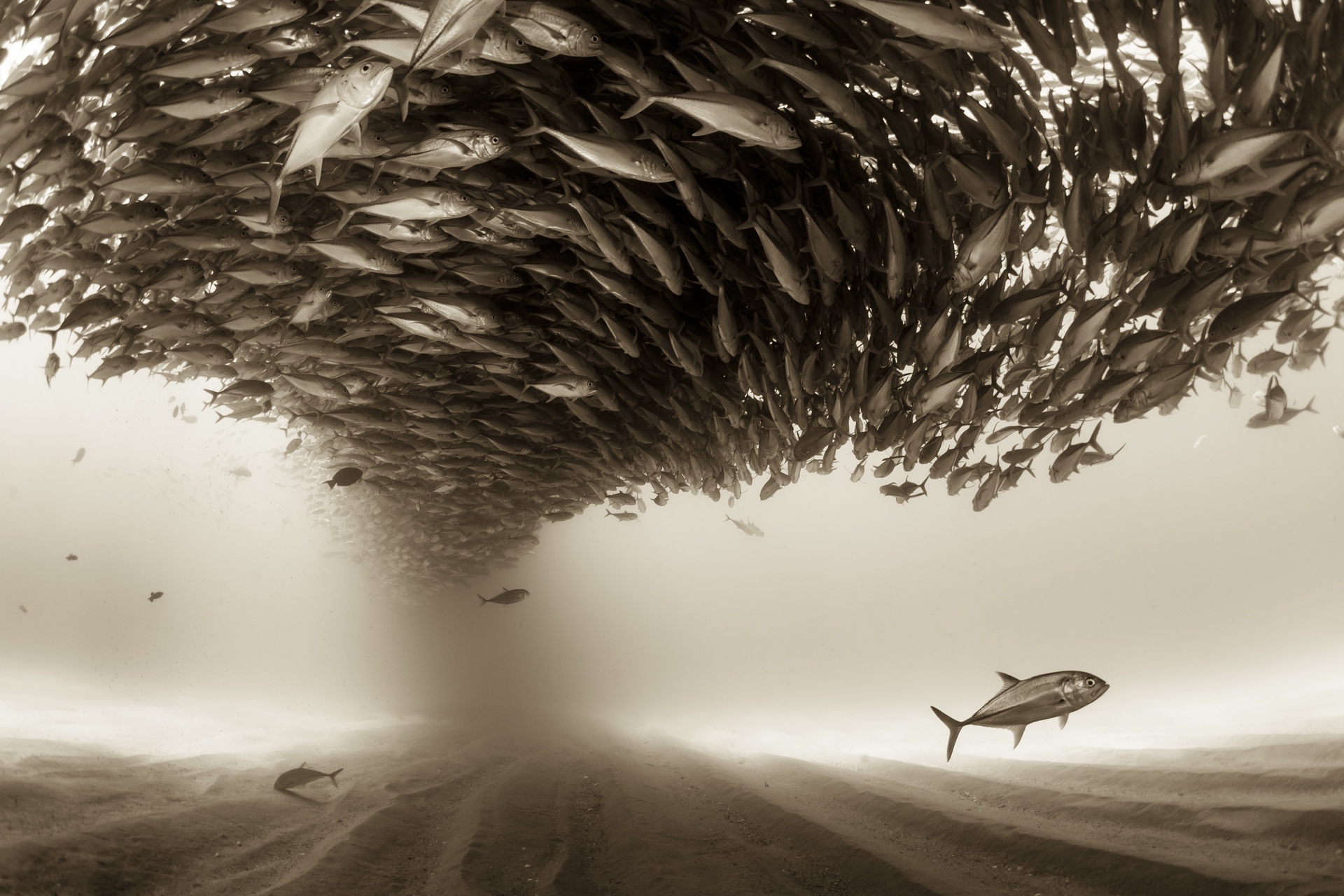 Mexico, Baja California, Sea of Cortez. A big school of Jacks forming a ceiling found at the protected marine area of Cabo Pulmo.

Vizl’s intention in his work  is to capture the essence of being immersed in the experience and presence of the animal or habitat he’s photographing, to share their splendour, beauty and true nature.

“Today, the world’s oceans are in grave danger,” he explains. “Overfishing, pollution, climate change, acidification and more threaten the fundamental nature of the ocean, and its animals are being pushed to the edge of extinction. Sadly, the majority of humans see marine animals merely as food.”

“As we can’t understand their voices, the higher purpose of my images is to be a voice of, and for the ocean, hoping that people can get a glimpse of who they really are; beautiful sentient individuals with feelings, personalities, complex behaviours and interesting lives that science is only starting to understand.” 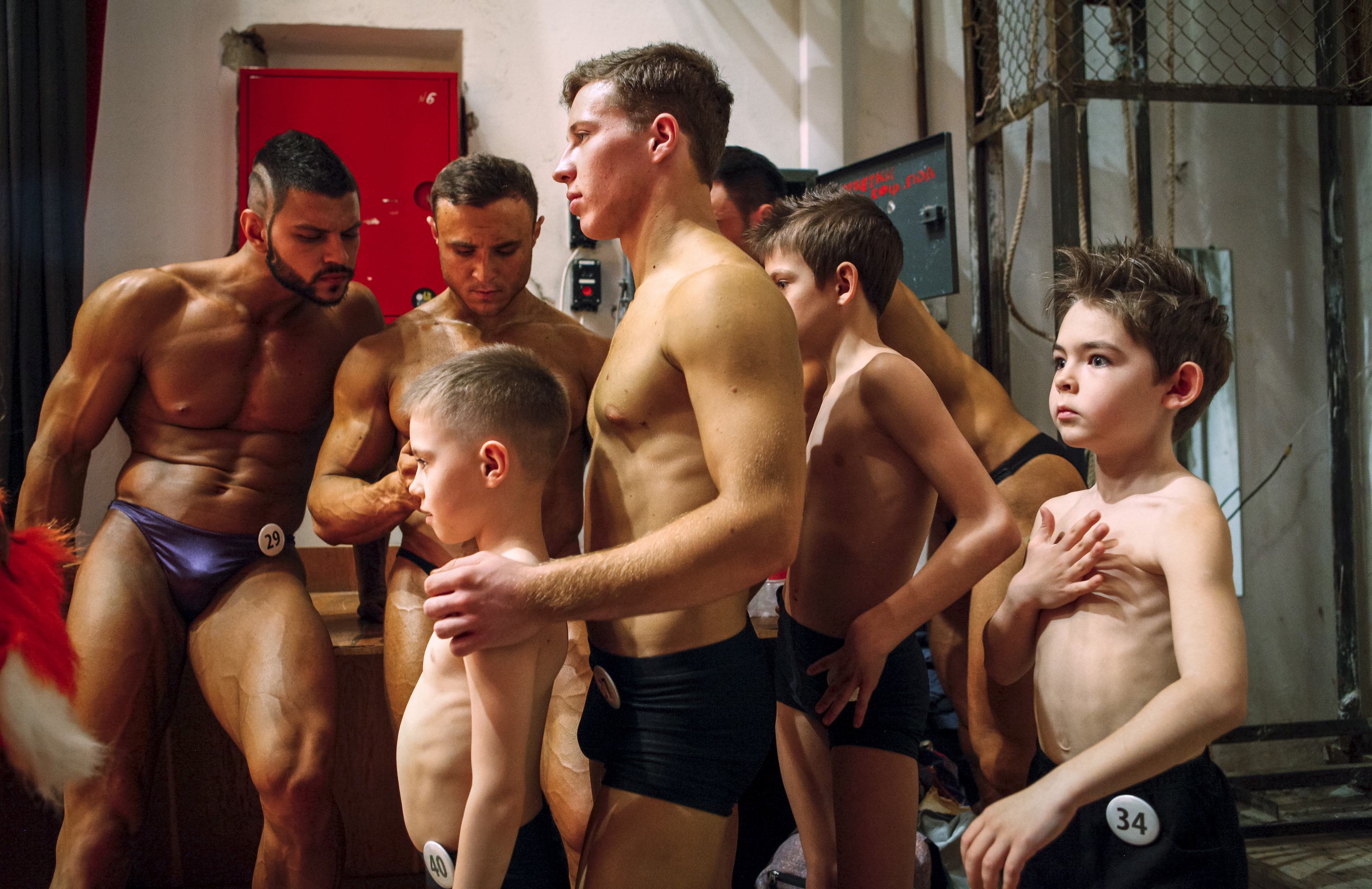 In the Soviet era, the sport of bodybuilding was not welcomed by official institutions, as opposed to weight lifting, which was judged acceptable and included in the Olympic programme. But people everywhere, from small towns in the far North-East to Siberia, Moscow and even the foot of the Caucasus Mountains, persisted in going to the “sweat box” gyms in cellars, to “build a body.”

Western magazines crammed with images of unrealistically muscled male and female bodies passed from hand to hand and an additional impetus to this semi-legal sport came with the growth of Arnold Schwarzenegger’s popularity. 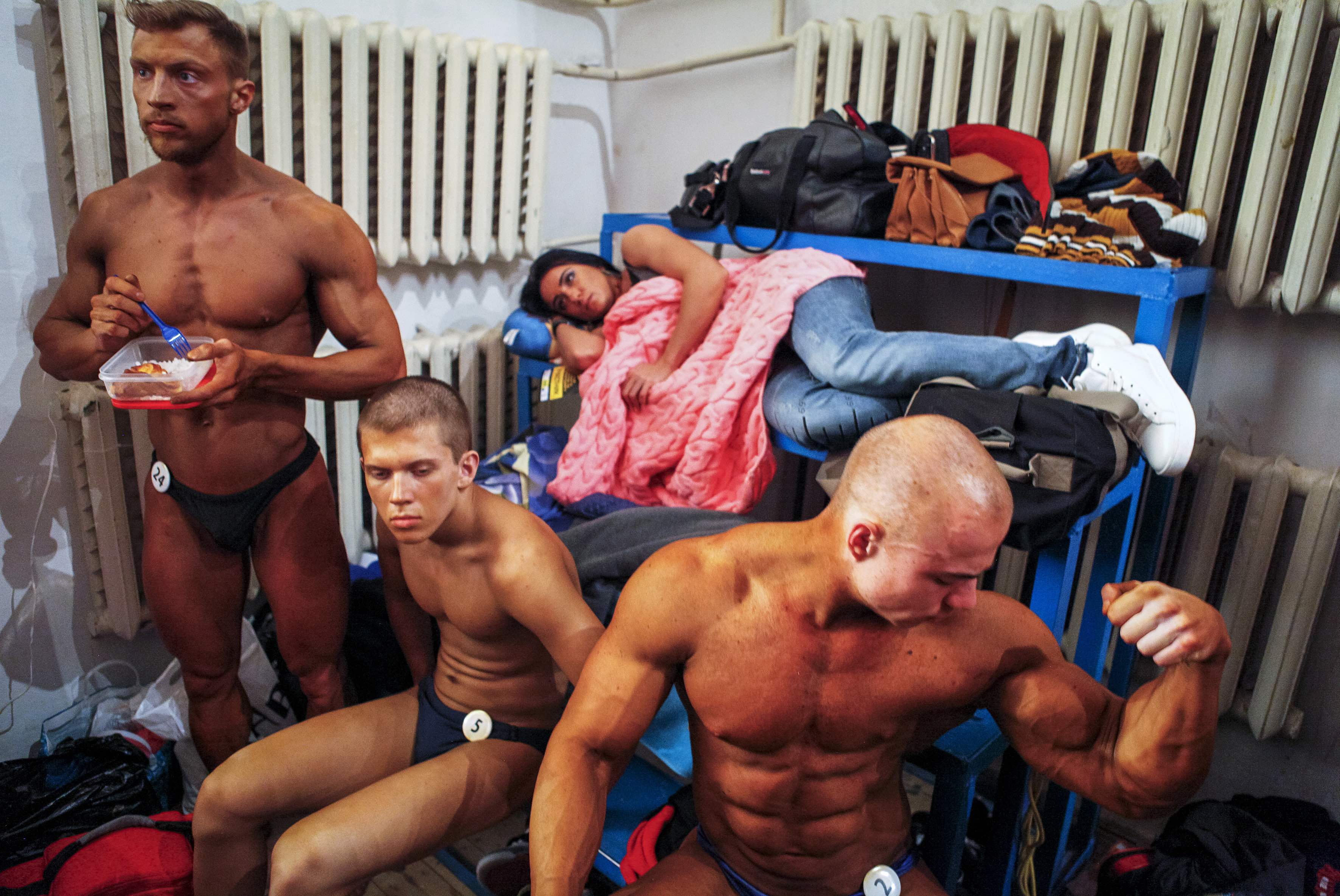 Today, with the ban lifted, bodybuilding’s popularity has not diminished. The only difference is that some of the clubs have moved from their old basements into modern fitness centres, although the basement scene remains.

A couple of times a year the participants climb the podium during various amateur and even professional tournaments. Here you can meet anyone; tax inspectors and businessmen, housewives and popular TV presenters.

Regardless of social status, or whether you live in a small town in the centre of Siberia, or in a big city, the only important thing for these people is making their bodies look perfect, and being admired by others.

Ivor Prickett: Caught in the Crossfire 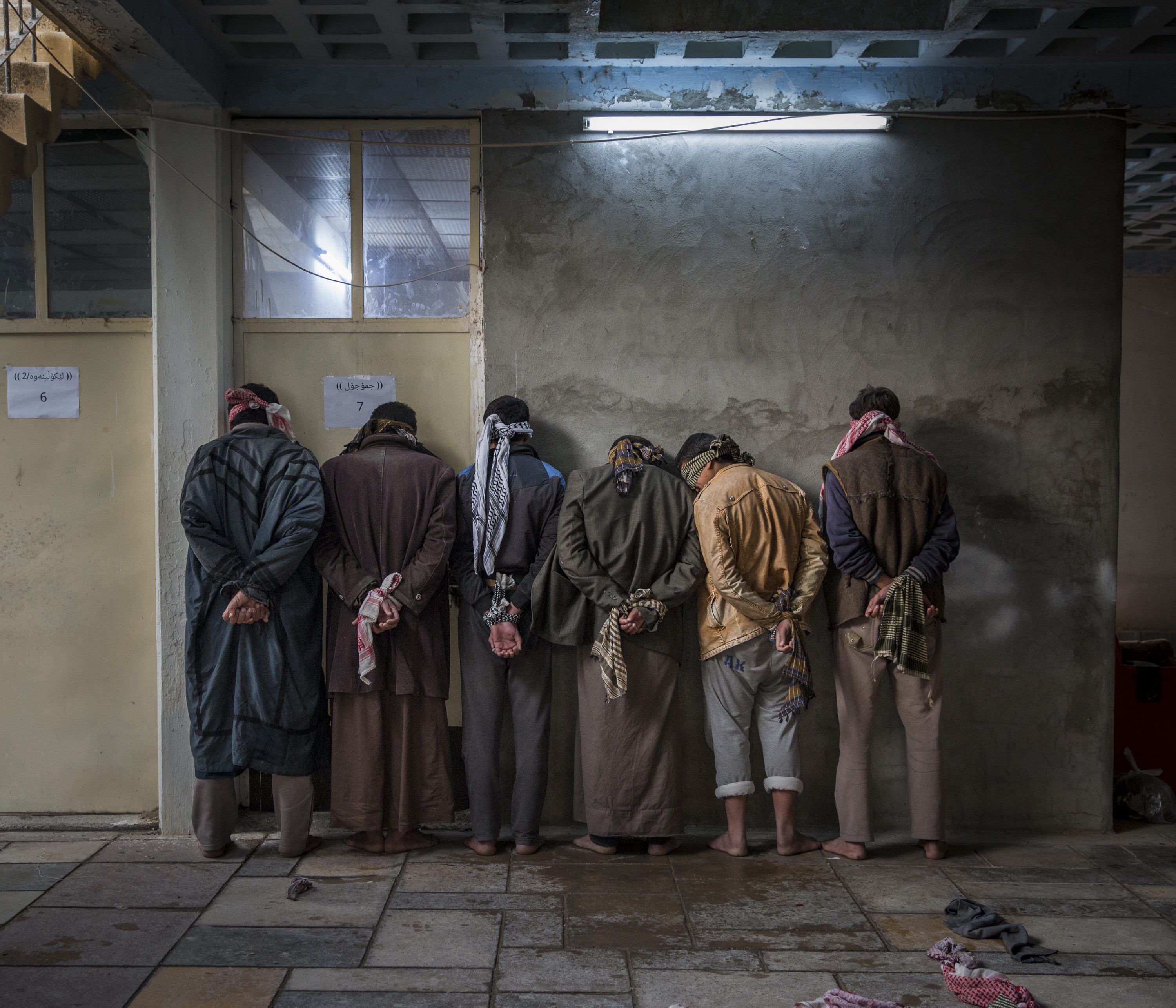 Iraqi men from the Hawija region of Iraq wait to be questioned by Kurdish security personnel at a base near Kirkuk. Having fled areas still under the control of ISIS militants, men and boys of fighting age are vetted for any links to the group before being allowed to join their families in camps for displaced people in the Kurdish-controlled region of the country.

As the fight for Mosul continues, thousands of civilians remain caught between Iraqi and coalition forces on one side, and Islamic State group fighters on the other. Over 800,000 people are still trapped in Mosul, according to estimates from the United Nations.

Tens of thousands are sheltering in neighbourhoods declared liberated by Iraqi forces and many more remain in parts of the city under ISIS control.

Sandra Hoyn: The Longings of the Others 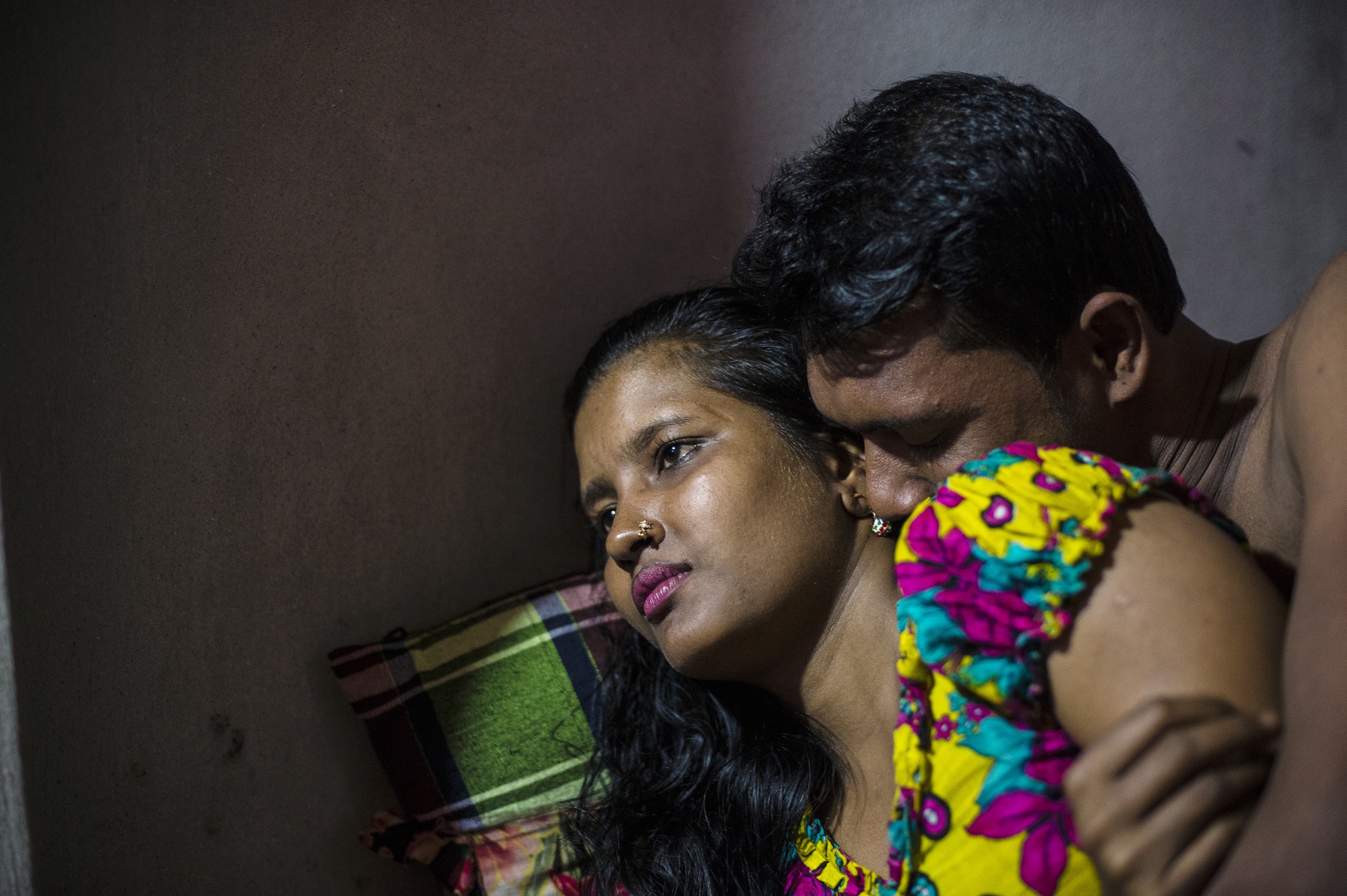 Meghla, 23, with a customer in the Kandapara brothel in Tangail. She started working for a garment factory when she was 12 years old. There she met a man who promised her a better job with more money and he sold her into a brothel.

The Kandapara brothel in the district of Tangail is the oldest and one of the largest in Bangladesh – it has existed for some 200 years. It was demolished in 2014 but has been re-established with the help of local NGOs.

The brothel district is surrounded by a two-metre wall, and in the narrow streets within, there are food stalls, tea shops and street vendors. More than 700 sex workers live and work here with their children and their madams. Many of the women were either trafficked or born inside the brothel’s walls and in this way their livelihood is secure. 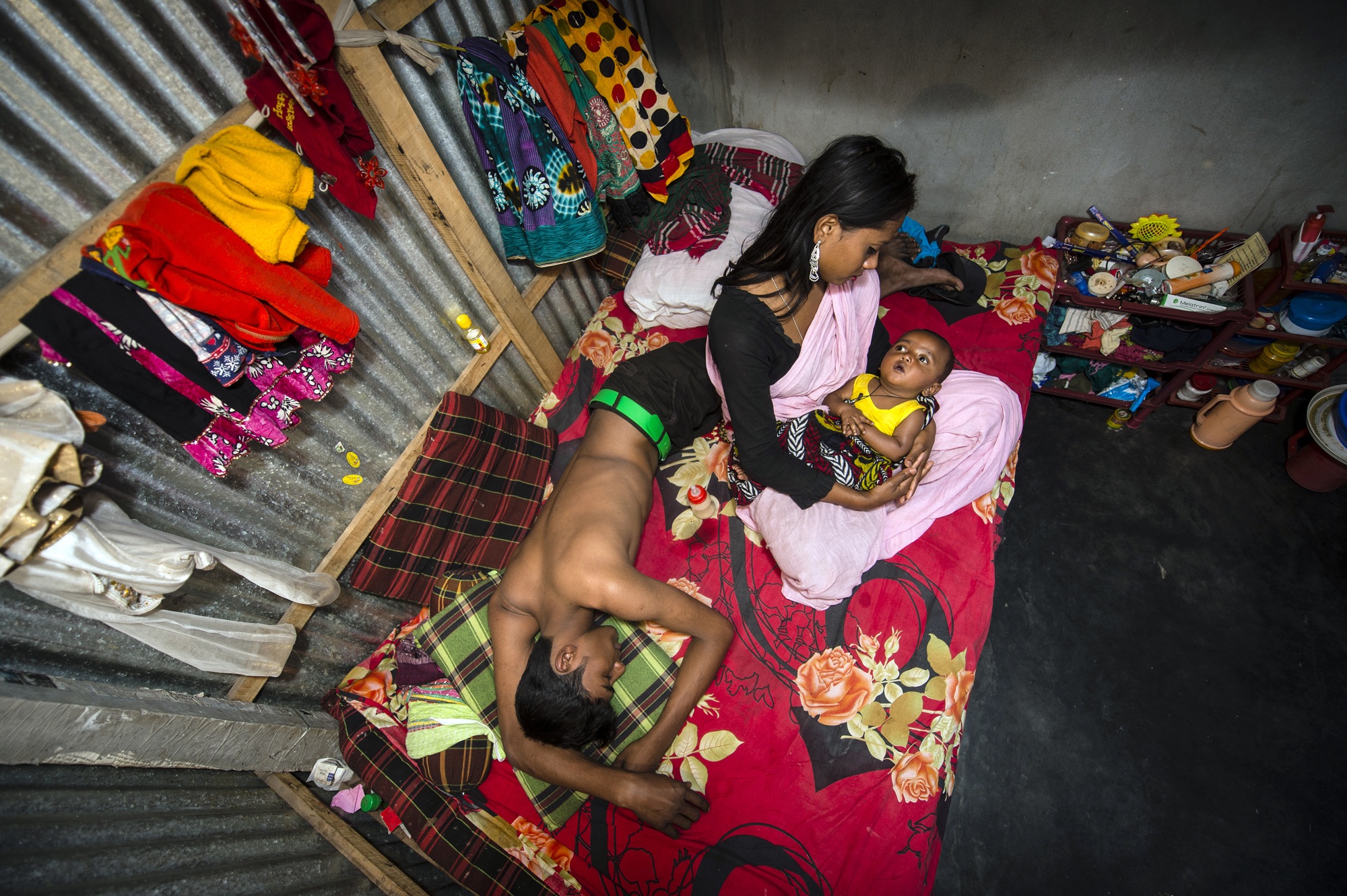 The brothel is a place with its own rules and power hierarchies, which are completely different from mainstream society.

Officially, sex workers must be 18 years old, but most are underage. They have no freedom or rights; they belong to a madam, have debts and are not allowed to go outside or keep their money.

From the moment a woman has paid her debts, she is free to leave. Although prostitution inside registered brothels has been legal in Bangladesh since 2000, these women are socially stigmatised outside their “homes” and thus often choose to stay and continue supporting their families with their earnings.

Li Song: I Want to Have an Ordinary Life 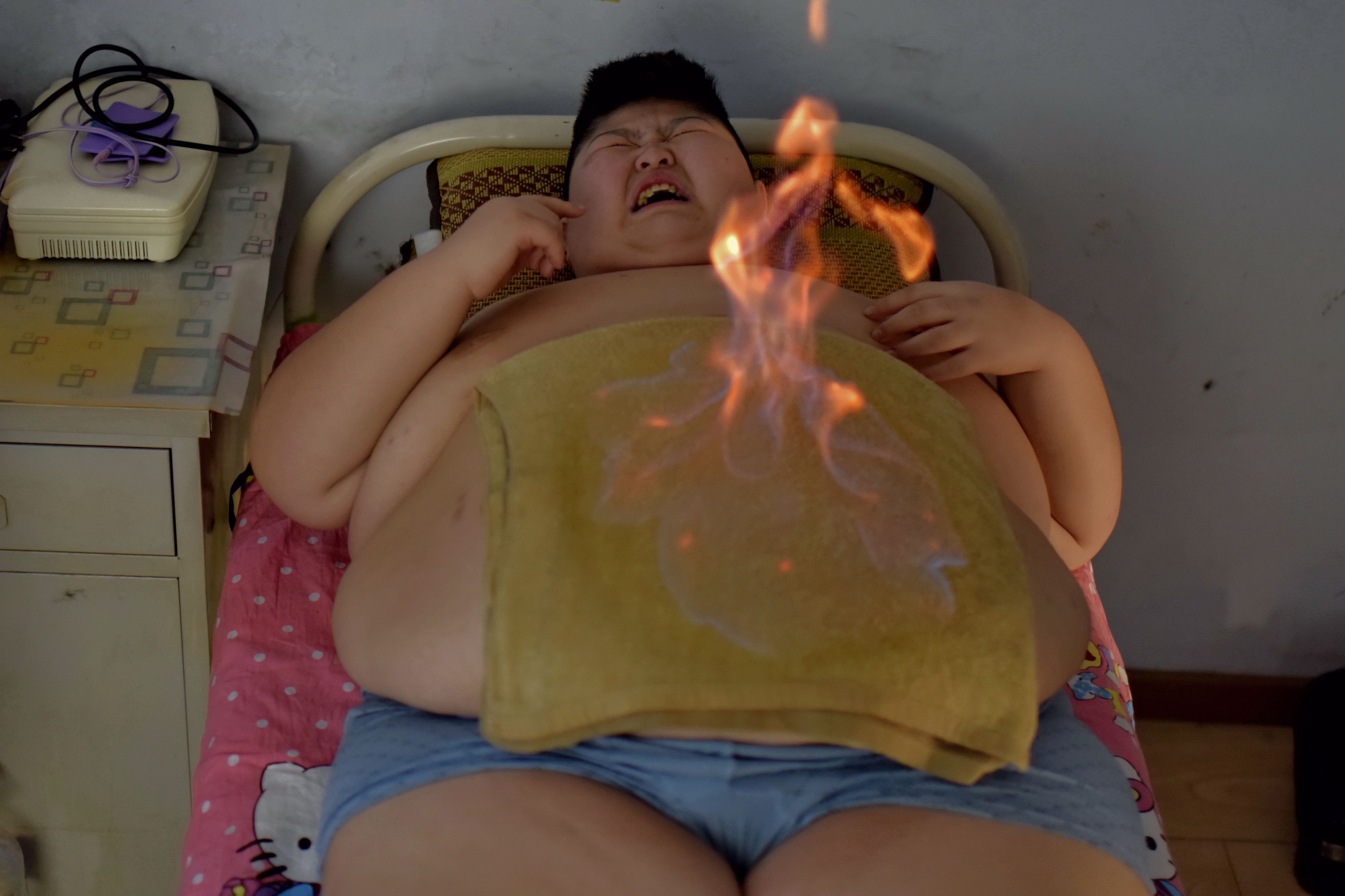 Li Hang, an eleven-year-old boy from Harbin, arrived at Changchun weight loss centre determined to lose weight. He had been diagnosed with Prader-Willi Syndrome when he was 3 years old, and on admission, his weight had reached 155 kilograms.

Prader-Willi Syndrome is a disease related to an abnormality in chromosome 15, and in around 70% of patients is inherited from their father. It occurs in 1 in 15000 people. Li Hang was being treated with traditional Chinese medicine every day, including massage, acupuncture, fire treatment and cupping therapy.

Aside from medical techniques, Li Hang also did a great deal of exercise daily with the fitness instructor. 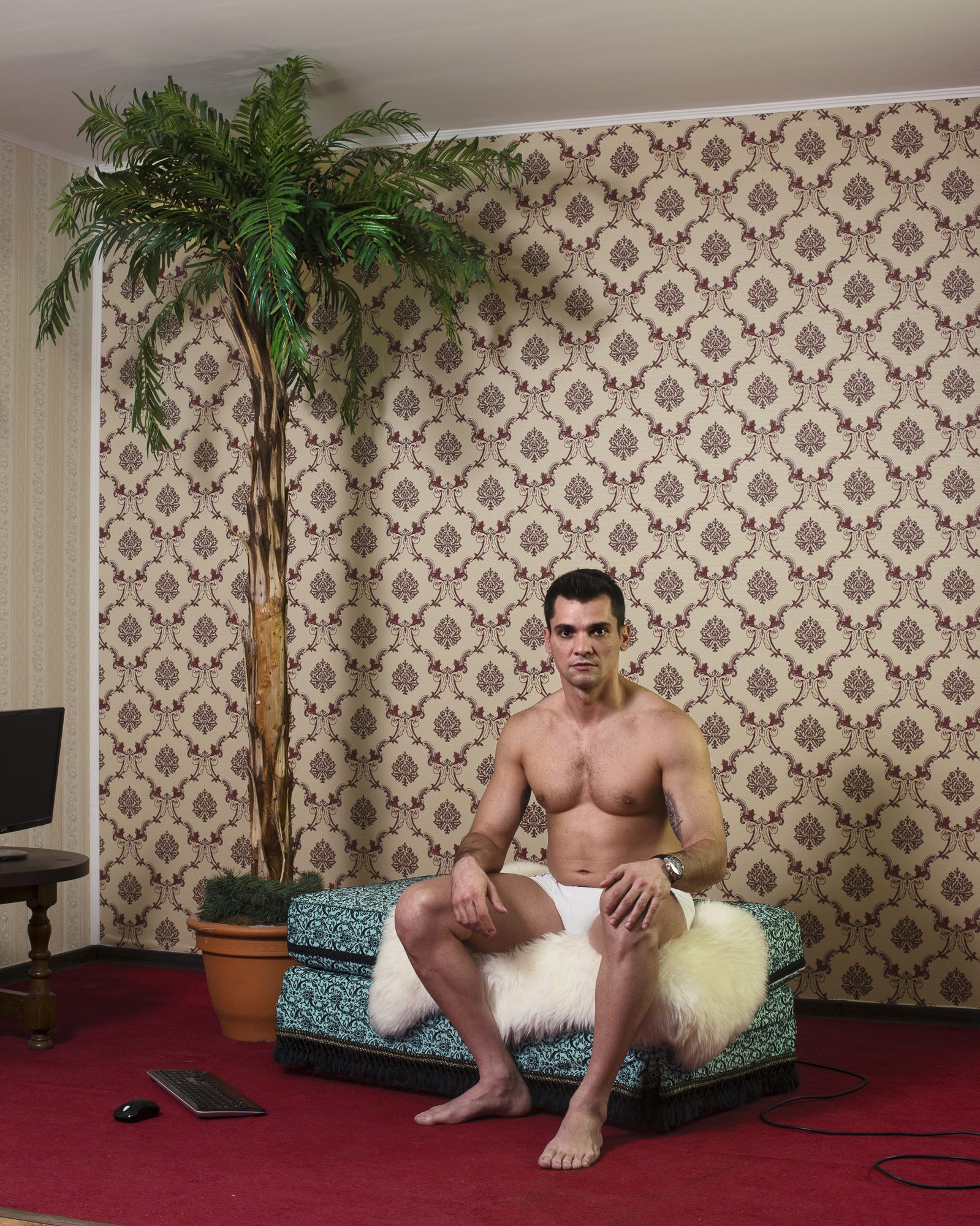 The adult webcam industry is worth $1 billion annually, and is growing fast as the technology becomes better and cheaper. Collectively, the sites are estimated to be visited daily by some 5 percent of the web’s global users and the number of models performing live online shows from private apartments or from specialised studios is increasing worldwide.

Romania, a country with one of the highest rates of youth unemployment in the EU, is now the undisputed world capital of studio-based cam operations, thanks to widespread wireless broadband access.

The industry has grown substantially since 2001, and most major Romanian cities now count hundreds of facilities offering English-speaking male and female models – most in their twenties – fast internet connections, high definition webcams and decorated rooms where they can turn into the virtual best friends and cybersex partners of paying clients, mostly from North America, but also from European and Asian countries.

The winning images are being exhibited at Somerset House, London from 21 April – 7 May 2017.

Linkedin
RELATED ARTICLES
OTHER ARTICLES
Following the release of his newly republished 1991 book, Redheads, the American photographer reflects on his celebration of ginger people and their magnetic power.
Members of the collective share some of their reasons to run as part of #UnitedBySummits, a campaign that looks to uncover transformative power of the outdoors.
The government is scrapping the Human Rights Act in a move that will hit marginalised people hardest.
From the Yakuza to a biker gang, Bruce Gilden recounts capturing Tokyo and Osaka in the ‘90s.
Photographer Robin Graubard’s debut book offers an unflinching record of turbulence and change across the Balkans.
New legislation is set to make it more difficult to hold Israel accountable for its human rights abuses.