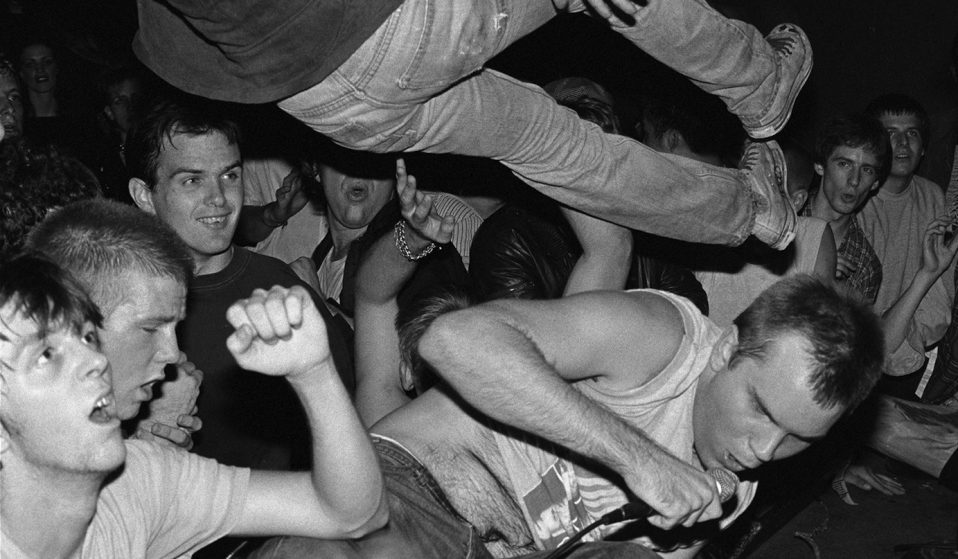 Jim Saah’s new book featuring hundreds of bands brings together images he shot of DC’s riotous punk gigs in the ‘80s and ‘90s.

In the ‘80s and early ‘90s, photographer Jim Saah was a regular at DC’s riotous punk gigs. A new book featuring hundreds of bands brings together his images from that vibrant period.

Punk scenes don’t exist in a vacuum. They’re about desire and alienation and anger, but at their best, they’re also about opportunity. They’re about places that offer people the chance to make a noise of their own. Places like Washington DC in the early 1980s.

“The city was kind of bankrupt,” photographer Jim Saah remembers. “Even though it was over 10 years earlier, the riots in ‘68 took a toll. There was a lot of white flight. People would work for the government and then go out to the suburbs, it was pretty dead at night.”

Running parallel to go-go (a subgenre of funk music with an emphasis on specific rhythmic patterns) and picking up the baton from the area’s punk pioneers, hardcore helped puncture that dead air. On any given evening, you might catch local bands playing small riser stages in the back rooms of Chinese restaurants or upstairs at leather bars. You might see touring bands such as west coast legends Circle Jerks at Space II Arcade, an eatery with a few games scattered around the place. “It was barely an arcade,” Saah says. “But, you know, it was a good place for a show.” 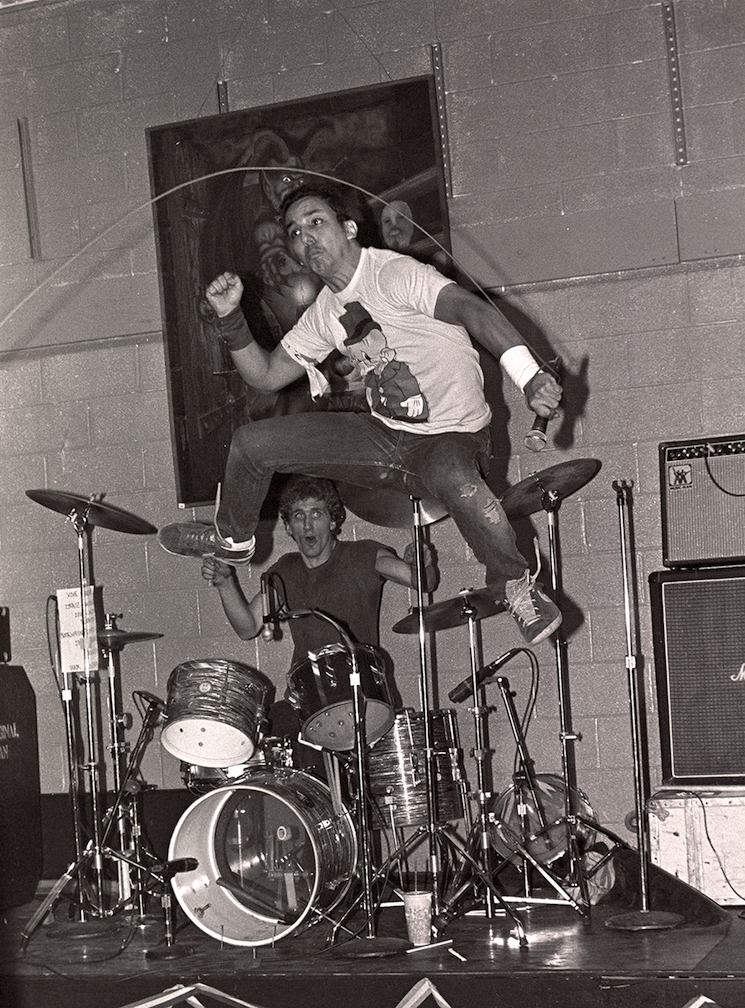 The cover still for Saah’s recent book In My Eyes: Photographs 1982-1997 was captured at Lansburgh Cultural Center – a dormant department store. Saah had been shooting bands for a year or so when he snapped an image of Minor Threat’s Ian MacKaye, his arms spread wide like Christ on the cross during their final show in September of 1983, opening for go-go heroes Trouble Funk.

At high school, Saah’s interest in photography emerged just as he became obsessed with punk rock. His first show with a camera in hand was a matinee that threw together Scream, Government Issue and D-beat pioneers Discharge, and soon, he was making his own zines. “I was excited about learning how to take pictures,” he says. “Later, once I got a body of work and made friendships, it became a project where I did think, ‘Yes, I want to document the scene because it’s meaningful.’”

In the space of a decade, DC also spat out Bad Brains, the Faith, Void, Embrace, Rites of Spring, Fugazi and State of Alert (where a pre-Black Flag Henry Rollins served as a vocalist). Saah scarfed it all down and later turned his attention to sets by out-of-towners: Hüsker Dü and the Replacements, the Minutemen or, in a striking detour from the t-shirts and Chuck Taylors of his peers, the PVC glam of the Cramps’ Lux Interior and Poison Ivy. 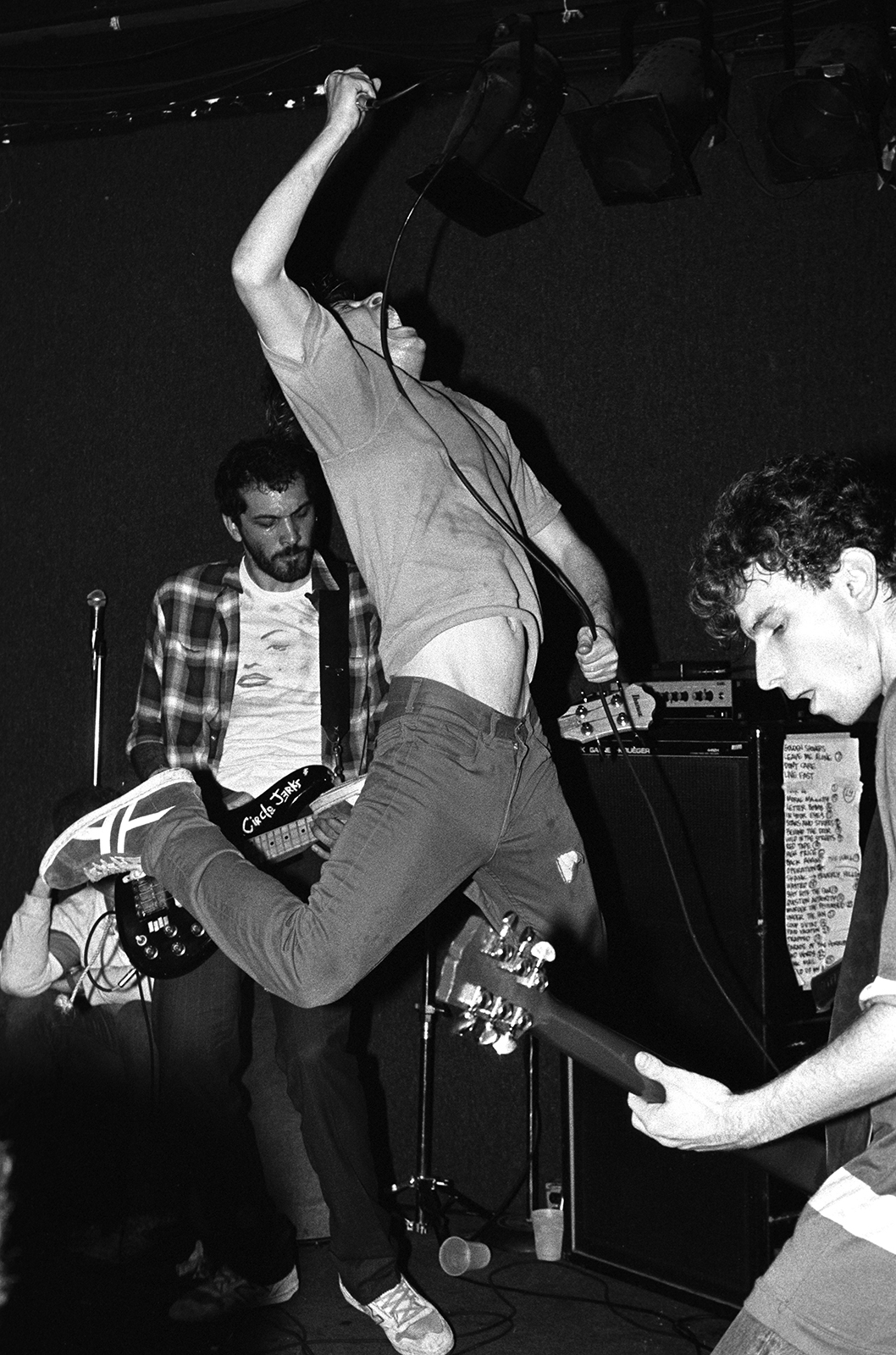 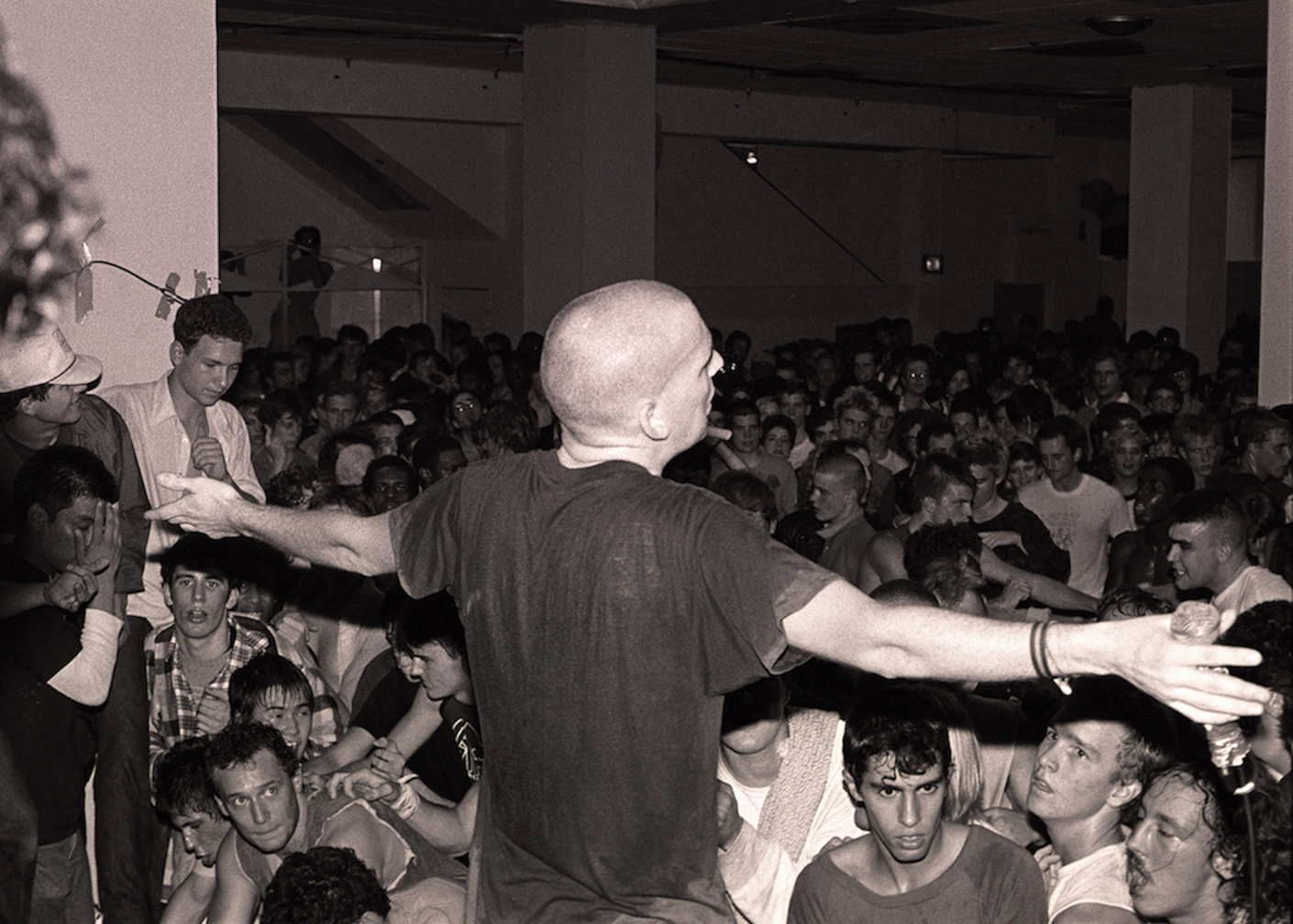 “In DC, the obvious one is Minor Threat,” he says. “The songs were just so great, and the energy level was so high that it was just euphoric. Fugazi was the same way. Void – I don’t know if I’ve ever seen a band with that much energy. When you’re there, and the music’s thumping in your chest, you just feel like something could explode. It was just an incredible energy exchange between the audience and the band.”

Saah’s photography regularly emphasises this exchange. In his photos of the Faith and Black Market Baby at the 9:30 Club, he focuses on movement rather than singling out the performer. There is the feeling of snatching a moment before it’s ripped away by the momentum of the room.

“I was shooting with film,” Saah says. “And I didn’t have anything fancy, like an Auto Winder, so you can’t take 20 pictures in two seconds. You really had to know the music, know when there was going to be a drum break, or when someone was going to jump. I would just try to get that decisive moment.” 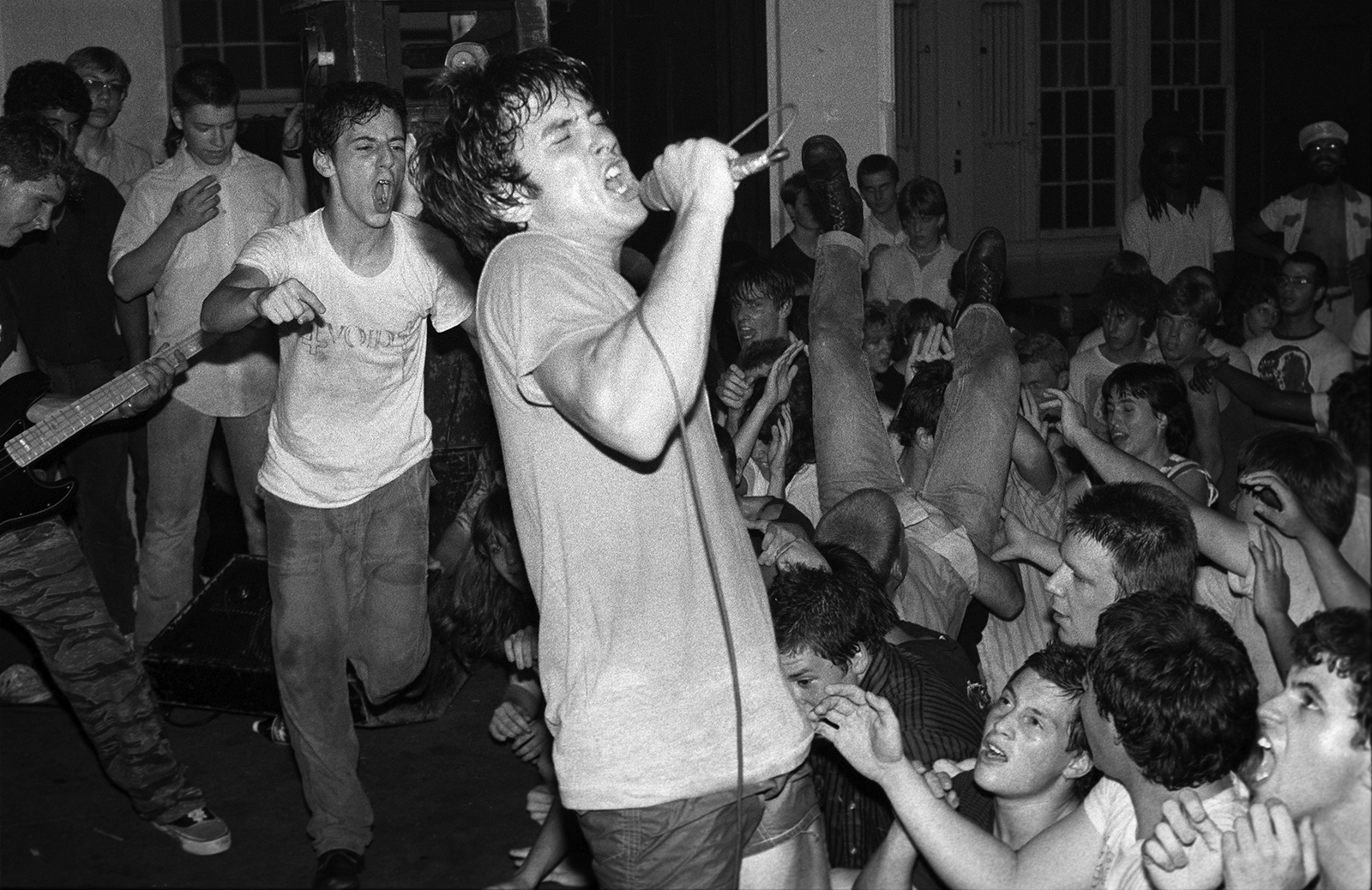 DC hardcore has lasted in part because the music was tied to ideals that still resonate. With Minor Threat came Straight Edge and the Dischord label. The reclamation of the scene from skinhead and jock violence in the mid-’80s was known as the Revolution Summer, where emo-forerunners Rites of Spring, Embrace, and Gray Matter existed amid a socially conscious, politically adroit community that was anti-sexist and pro-animal rights. 20 years after they entered hiatus, meanwhile, Fugazi remain an uncompromising monument to DIY culture.

Saah’s photographs are a visceral shorthand for these ideas, too. In his later photojournalism, whether he was working for The Washington Post and Rolling Stone, or covering N.A.F.T.A-adjacent labour and environmental issues in the employ of a US senator, he believes he took this reality with him.

“By the time I graduated high school, I knew I wanted to be a professional photographer,” he says. “Cutting my teeth on punk rock was integral to my style and to the urgency of my photographs.” 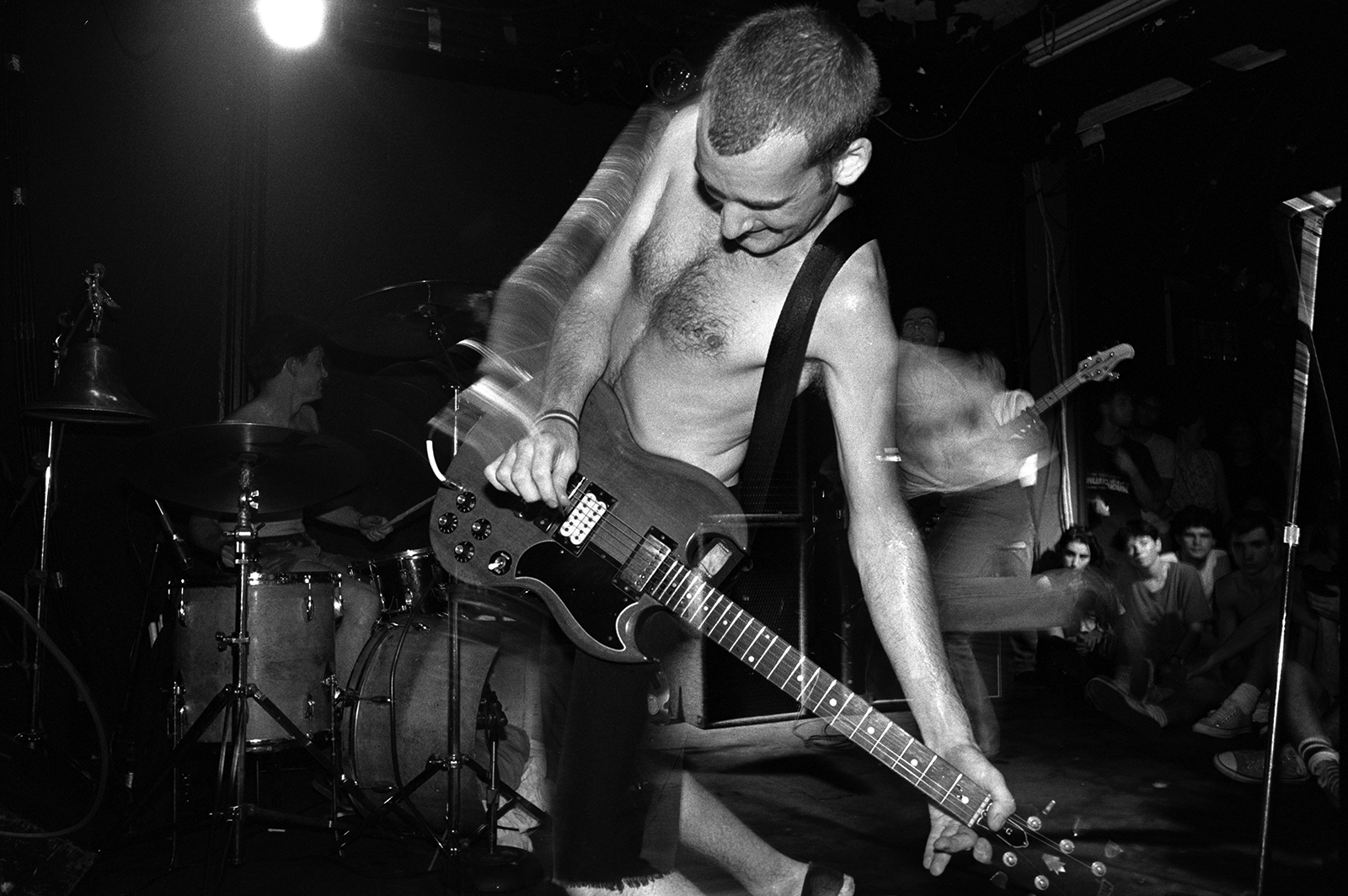 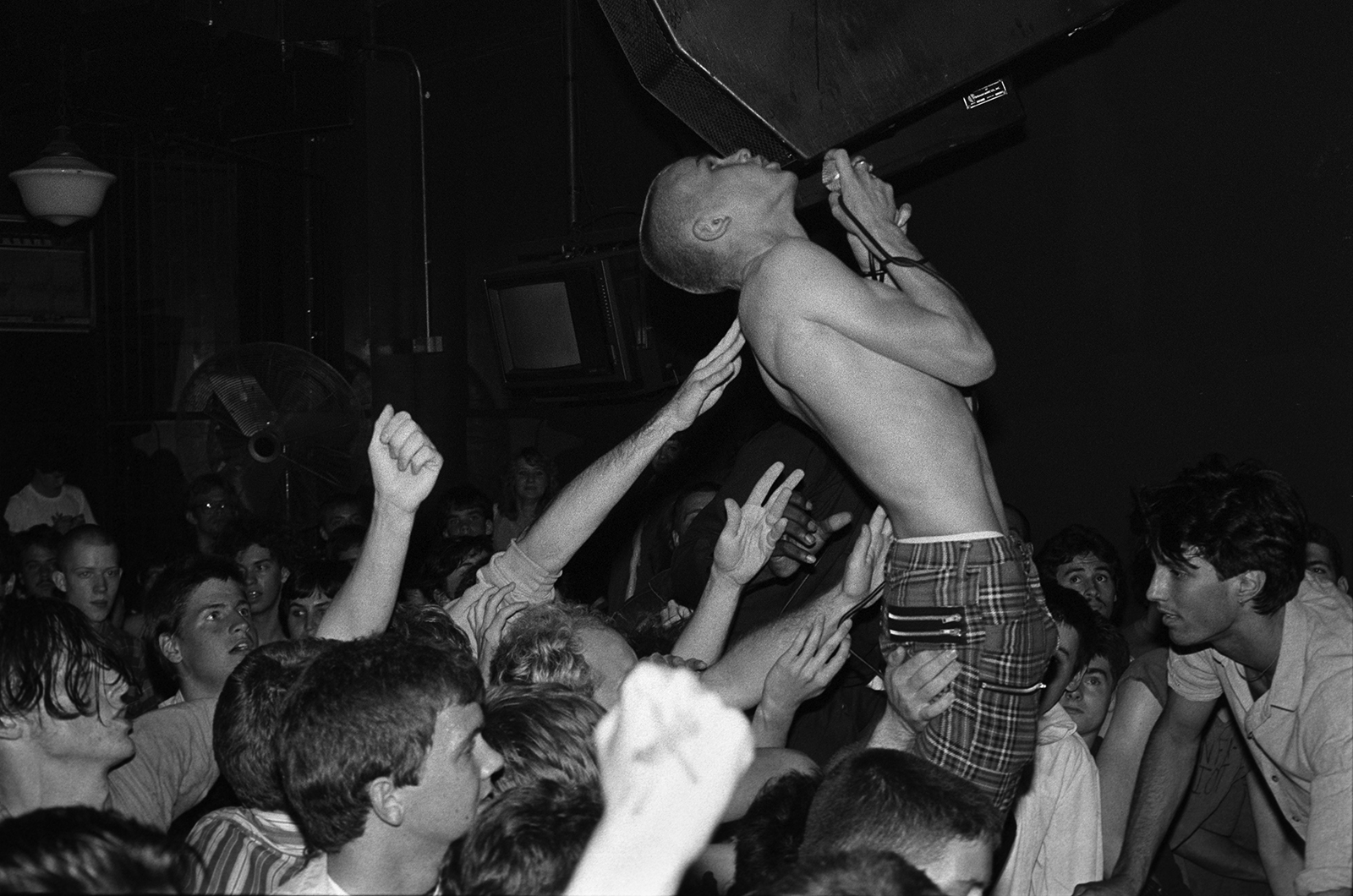 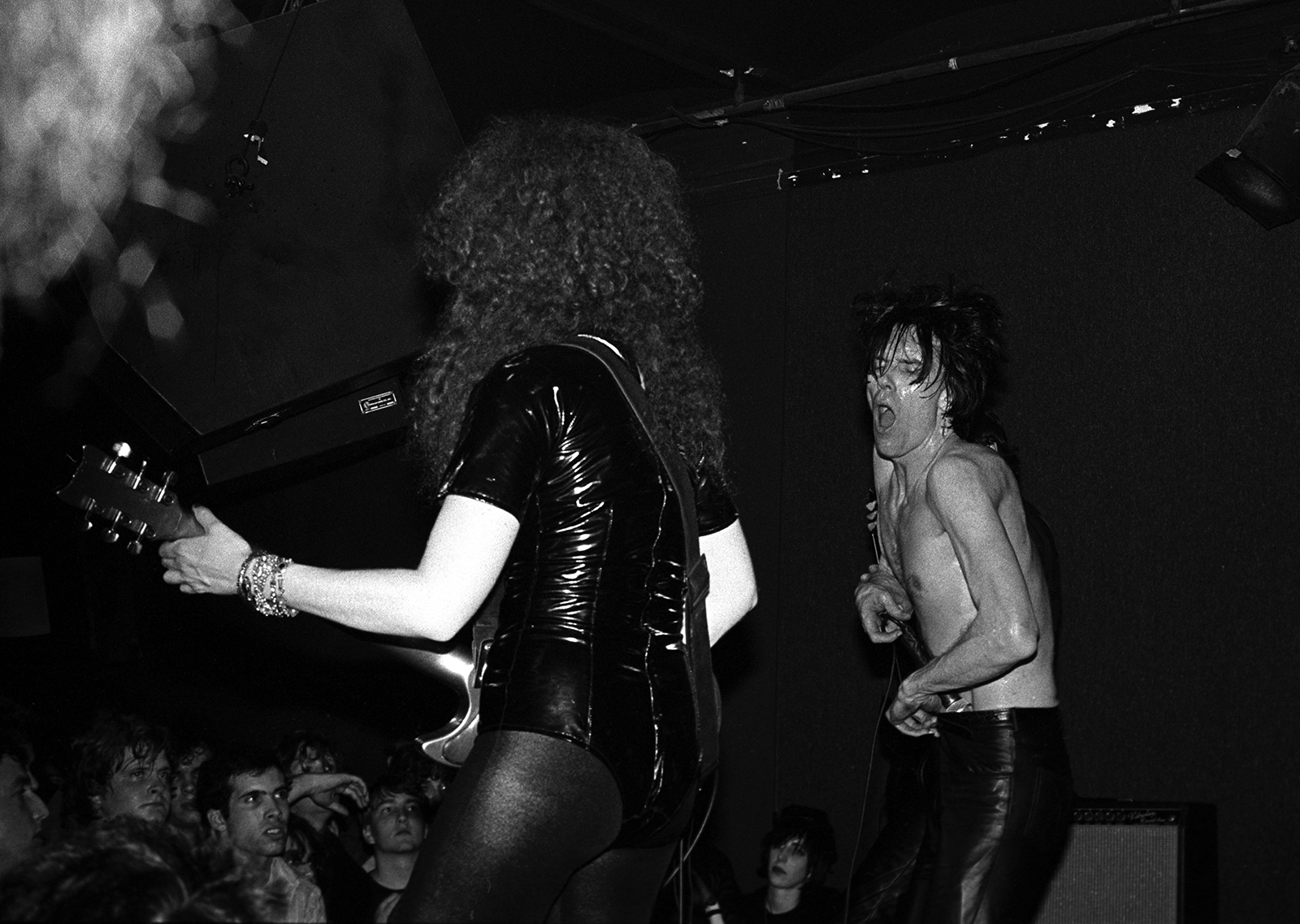 Linkedin
RELATED ARTICLES
OTHER ARTICLES
SOAS Detainee Support detail the appalling conditions they witnessed at the dangerously overcrowded immigration centre in Kent.
The photographer reflects on a decade which saw the rise of MTV and the flourishing of new genres.
Photographer Ira Lapu documents the lives of ordinary Ukrainians living amid a brutal conflict.
Over the weekend, the United Families & Friends Campaign organised a protest calling for an end to deaths at the hands of the police.
We catch up with the singer in her London studio to connect the dots between music, painting and her relationship with the city.
A new exhibition brings together 150 works by twelve photographers, offering mesmerising and intimate depictions of life.