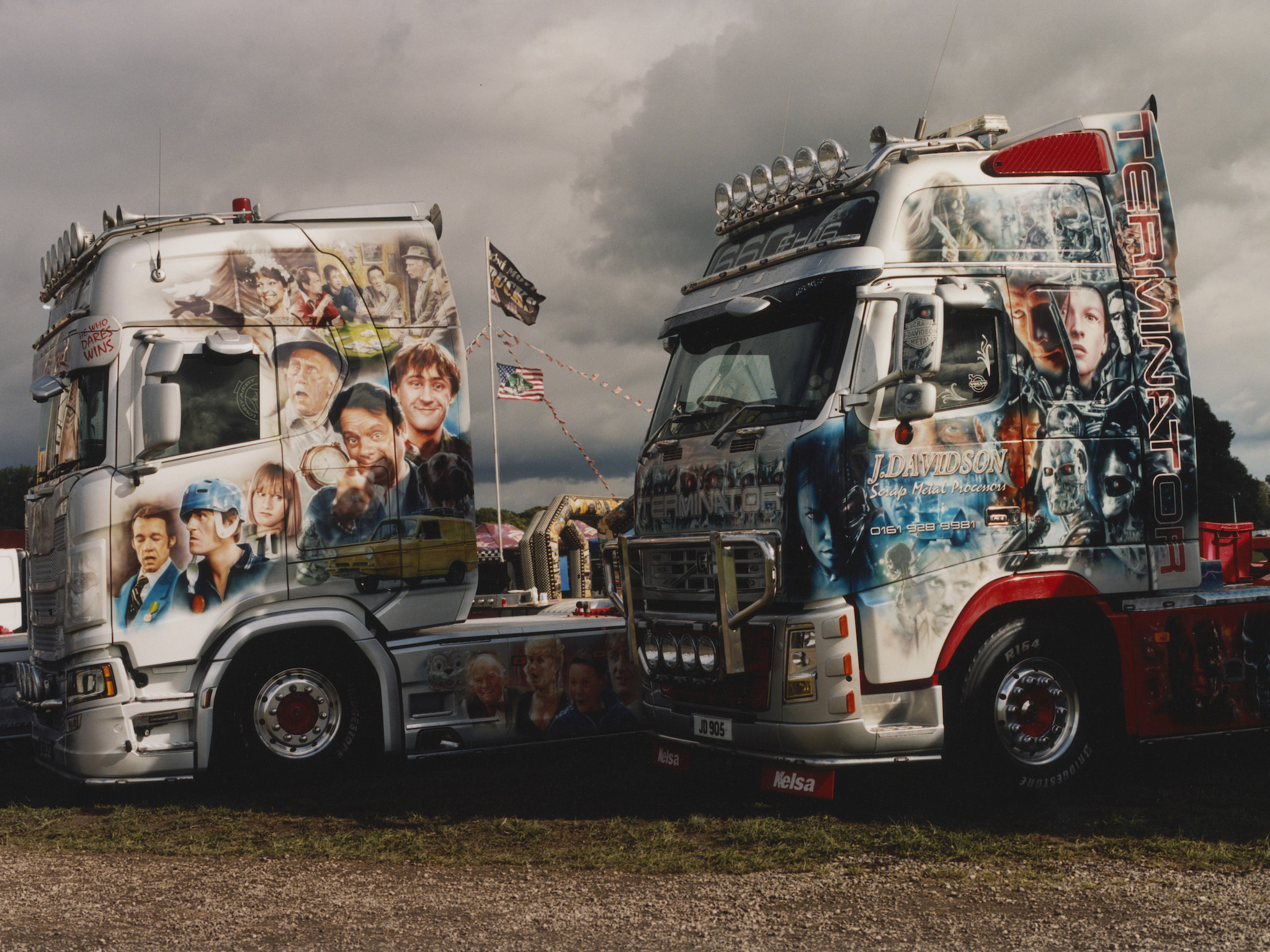 Freddie Miller describes documenting the airbrushed trucking scene, as well as the people who spend painstaking amounts of money and time ensuring their vehicles are sprayed to perfection.

Freddie Miller describes documenting the unique, elaborate style of the airbrushed trucking scene, as well as the people who often spend painstaking amounts of money and time ensuring their vehicles are sprayed to perfection.

One day last year, photographer Freddie Miller was sitting outside the Hermit’s Cave in South London – an old-school, family run pub set on a main road near to Camberwell Green. As he sipped on his freshly-poured pint, with cars, buses and all manner of transport blaring from the street, one vehicle in particular moving by grabbed his attention.

A giant, 18-wheeled lorry navigating congested London lanes will always stand out among the traffic, but it was its bold paint job that really made him look. “It had this weird battle scene,” Miller says. “Like a warrior with a sword or something really crazy like that.

“I just remember seeing it and thinking: ‘It’s like the stuff you see in carnivals,’” he continues. “Like what is that? It’s really bizarre.” 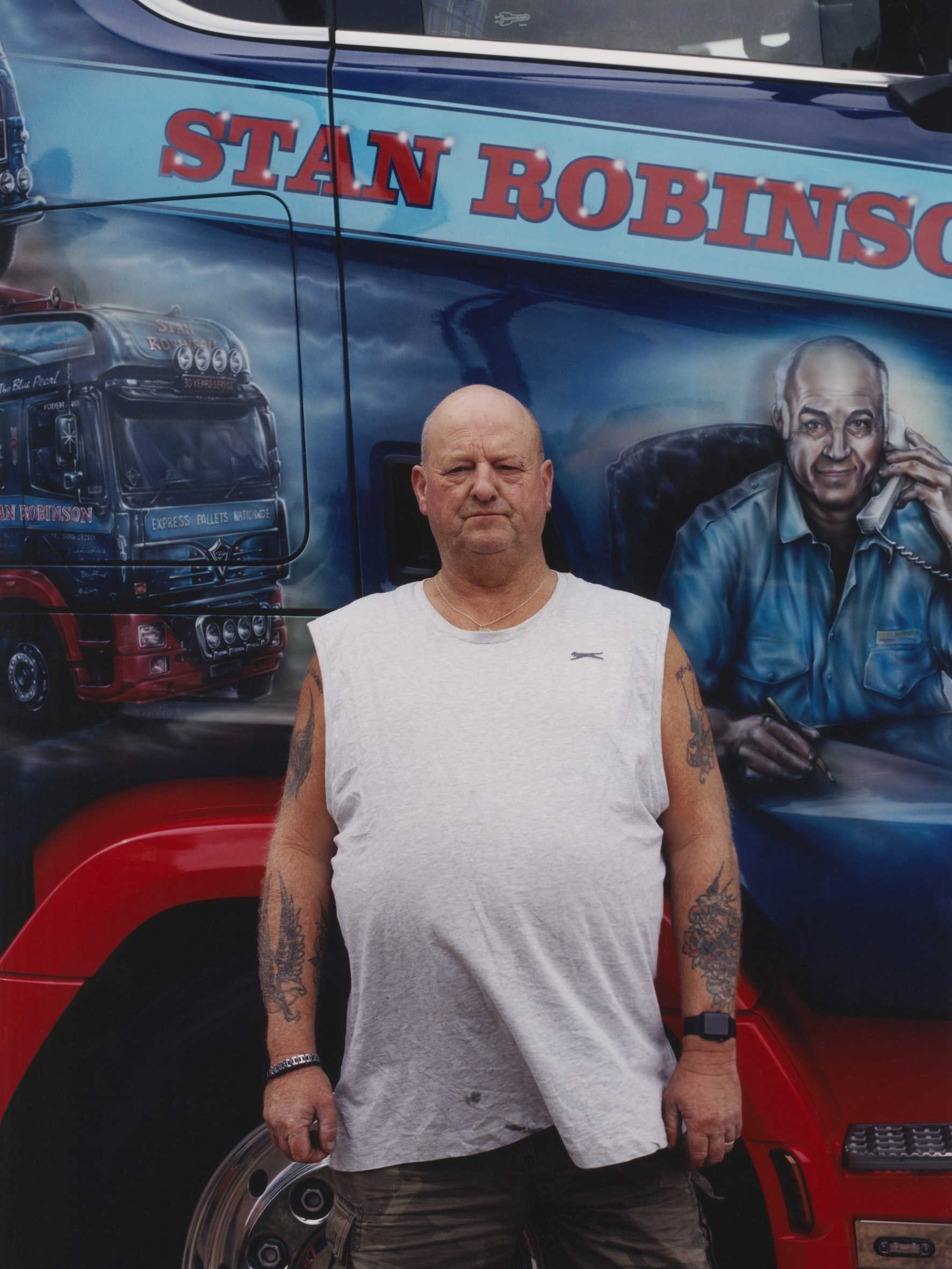 It was the first airbrushed truck that Miller had noticed in his life, and soon he began noticing them on motorways and roads around the country.  After some digging on the internet, he realised that a whole subculture of people spraying their trucks existed – each with their own distinct visual identity. The subculture is explored in his latest photography series, Airbrushed Dreams, which captures the unique, elaborate aesthetic style of the airbrushed trucking scene, as well as the people who often spend painstaking amounts of money and time ensuring their vehicles are sprayed to perfection.

The pictures show off the vibrant, precisely-detailed style preferred by the truckers, often with entire film scenes or casts, or intricate portraits of loved ones splashed across the bonnets and sides of the vehicles. “It reminds me of that aesthetic from fairgrounds,” he says. “You’d go to a ride and there would be a really weird, hyperreal visualisation of a big celebrity like Britney Spears, or Mad Max or Terminator or some sort of movie character painted across one of the rides. 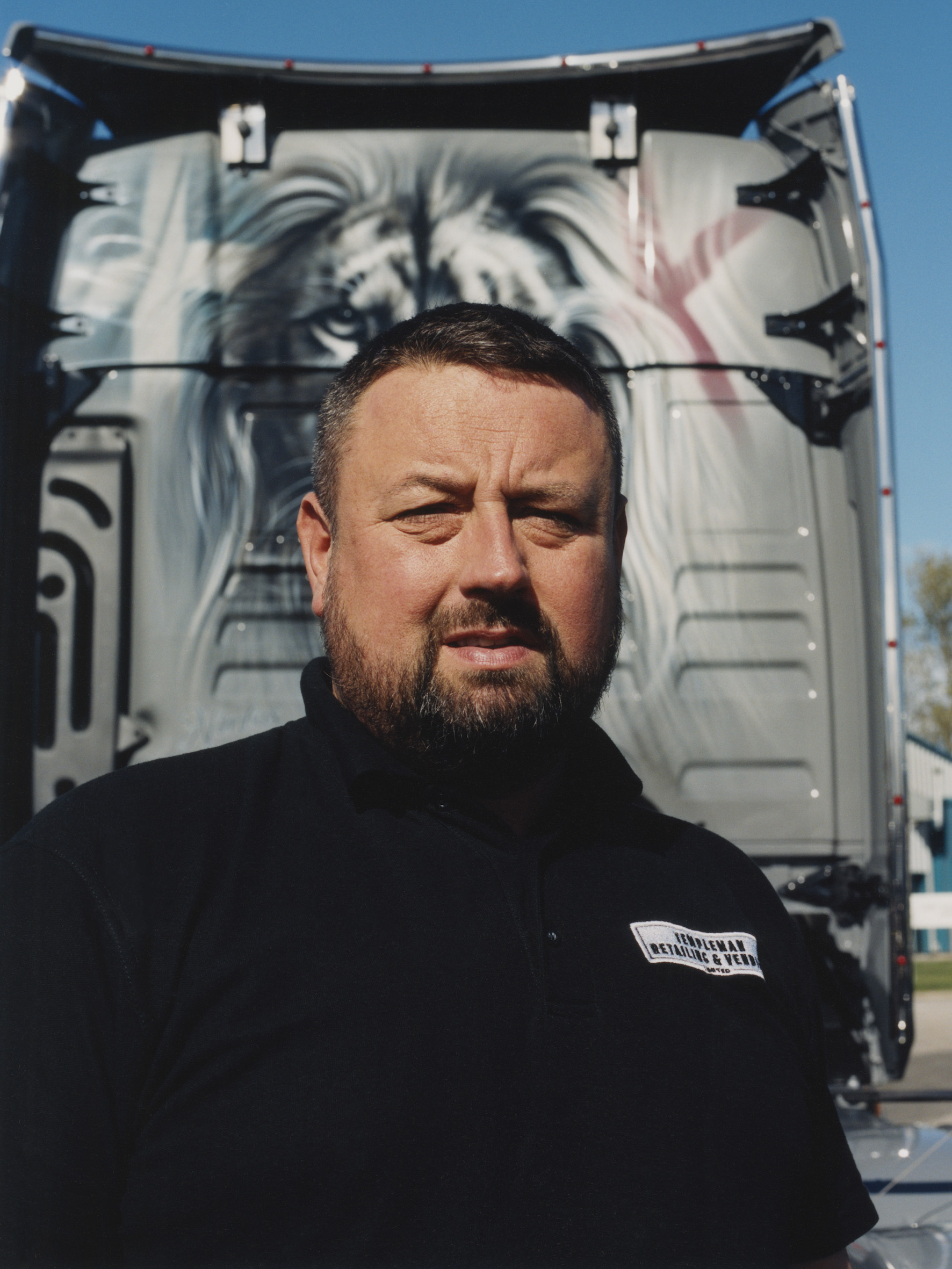 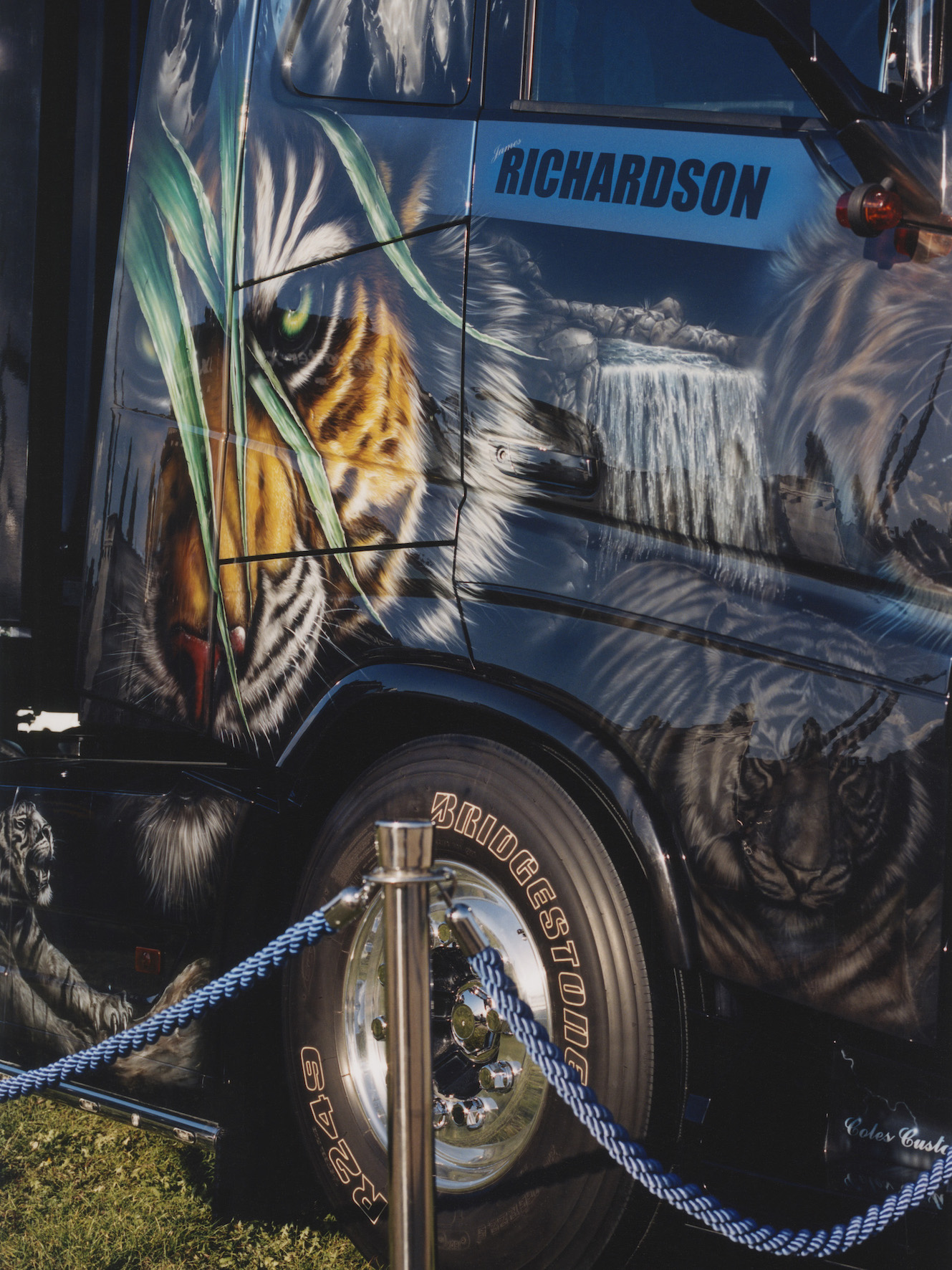 Going through the process of having a truck airbrushed with an elaborate design in an arduous one. With just five or six people around the UK with the skills and tools to properly pull off a paint job, it can take weeks and often months to complete, on top of tens of thousands of pounds of their hard-earned cash.

“They’re all extremely proud of their trucks,” Miller says. “They’re adding a sense of character and personal style to something that outwardly might not seem like a particularly [artistic] industry.” 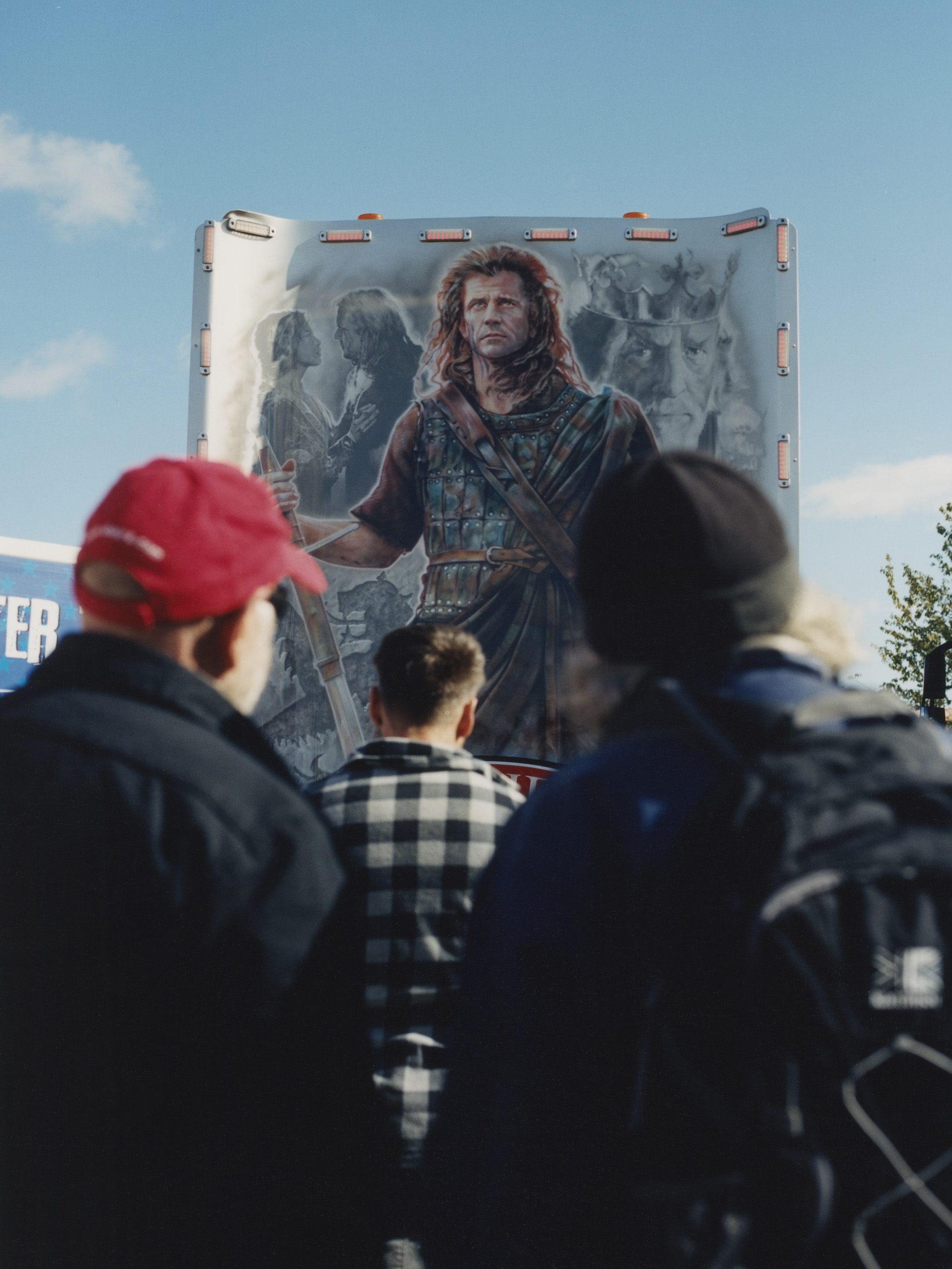 But it’s not just individual truckers who try to get their personality across on their vehicles – some companies also get their trucks airbrushed. One picture captures a driver Miller shot standing in front of his lorry, with a truck of the same company painted to his left, and then an almost photographic depiction of the company’s owner speaking on a landline phone to his right. “It’s a good marketing tactic – it’s really eye catching,” he says. “You’ll recognise a truck from so-and-so haulage, and you’ll spot them on the roads.”

But most of all, the trucks and their designs embody a sense of fun. “The reason why I was so interested in this as a topic,” Miller explains, “is that you’re adding a sense of fantasy and make-believe to when you’re just sitting and driving on a really long road.

“It’s adding an enchantment and magic to it – that’s why it’s all so embellished. It’s kind of like being a big kid.” 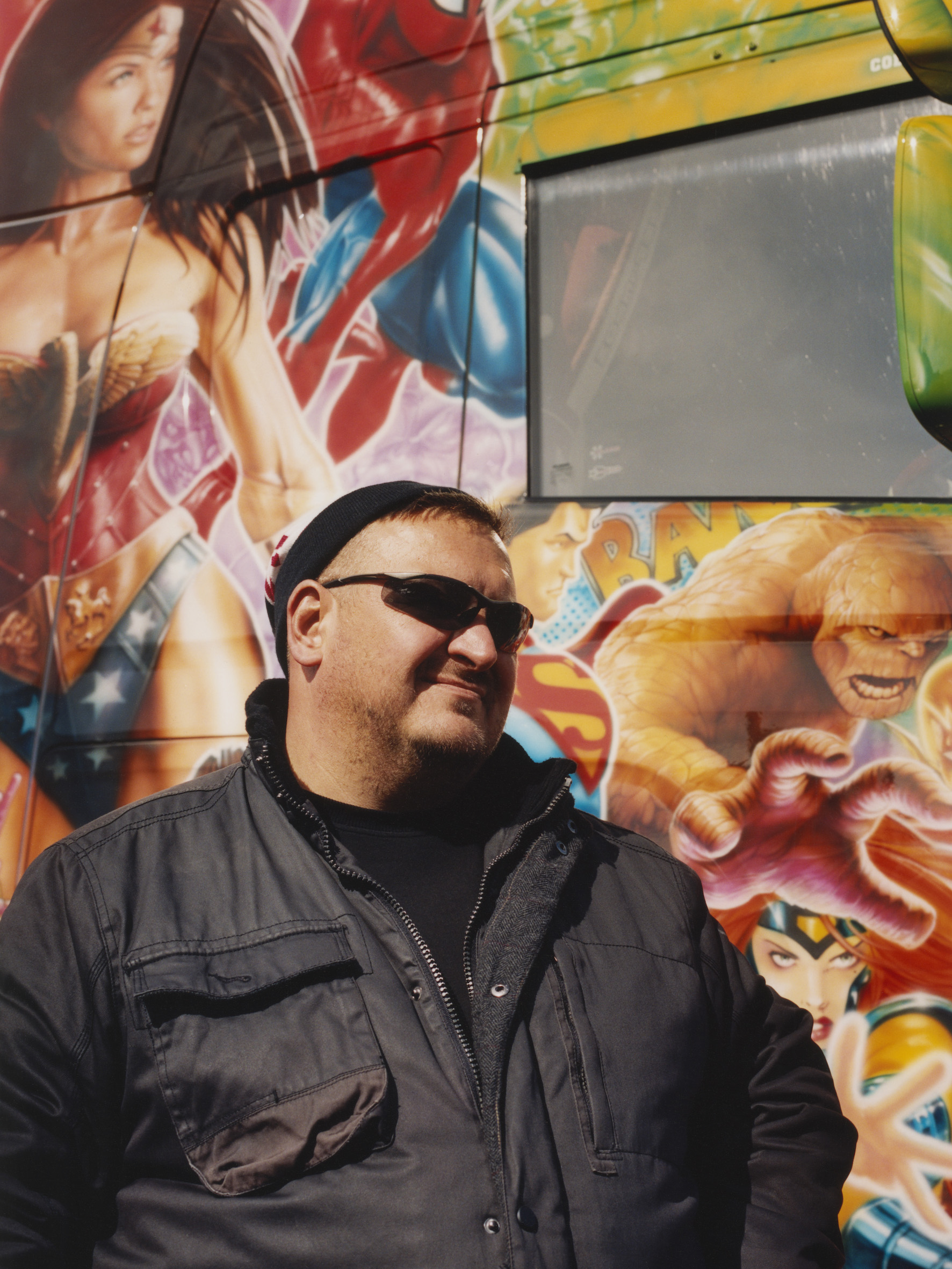 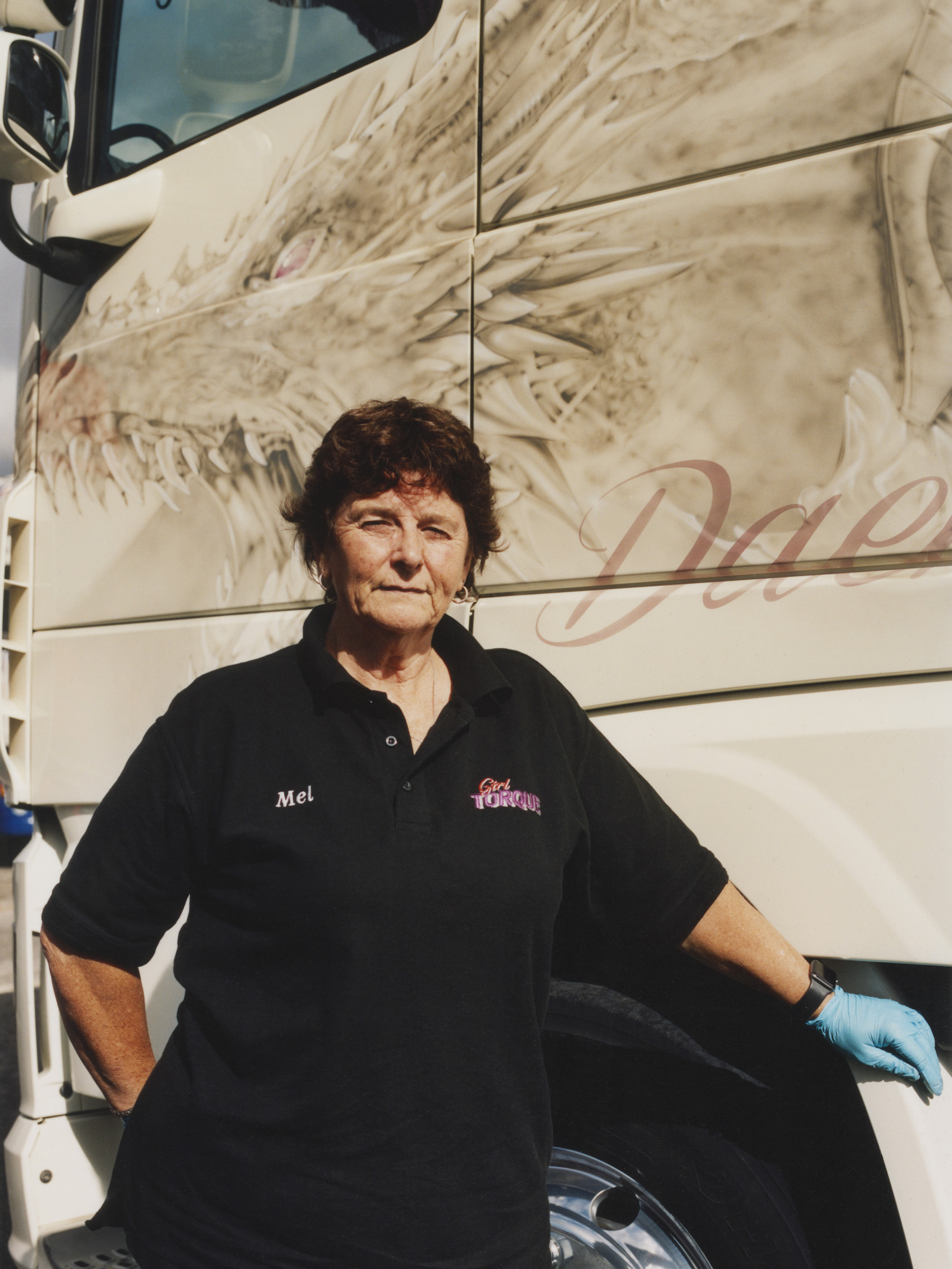 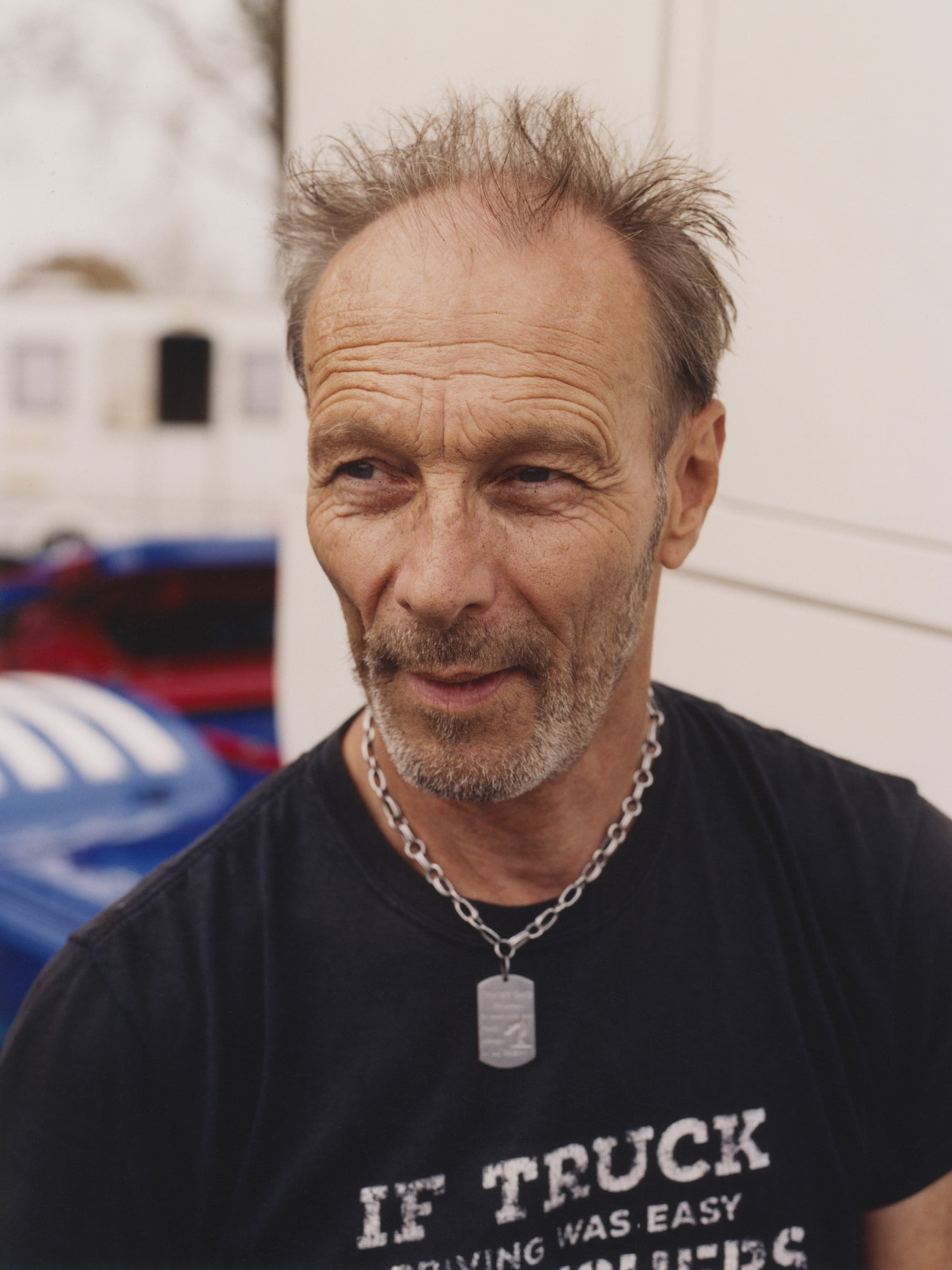 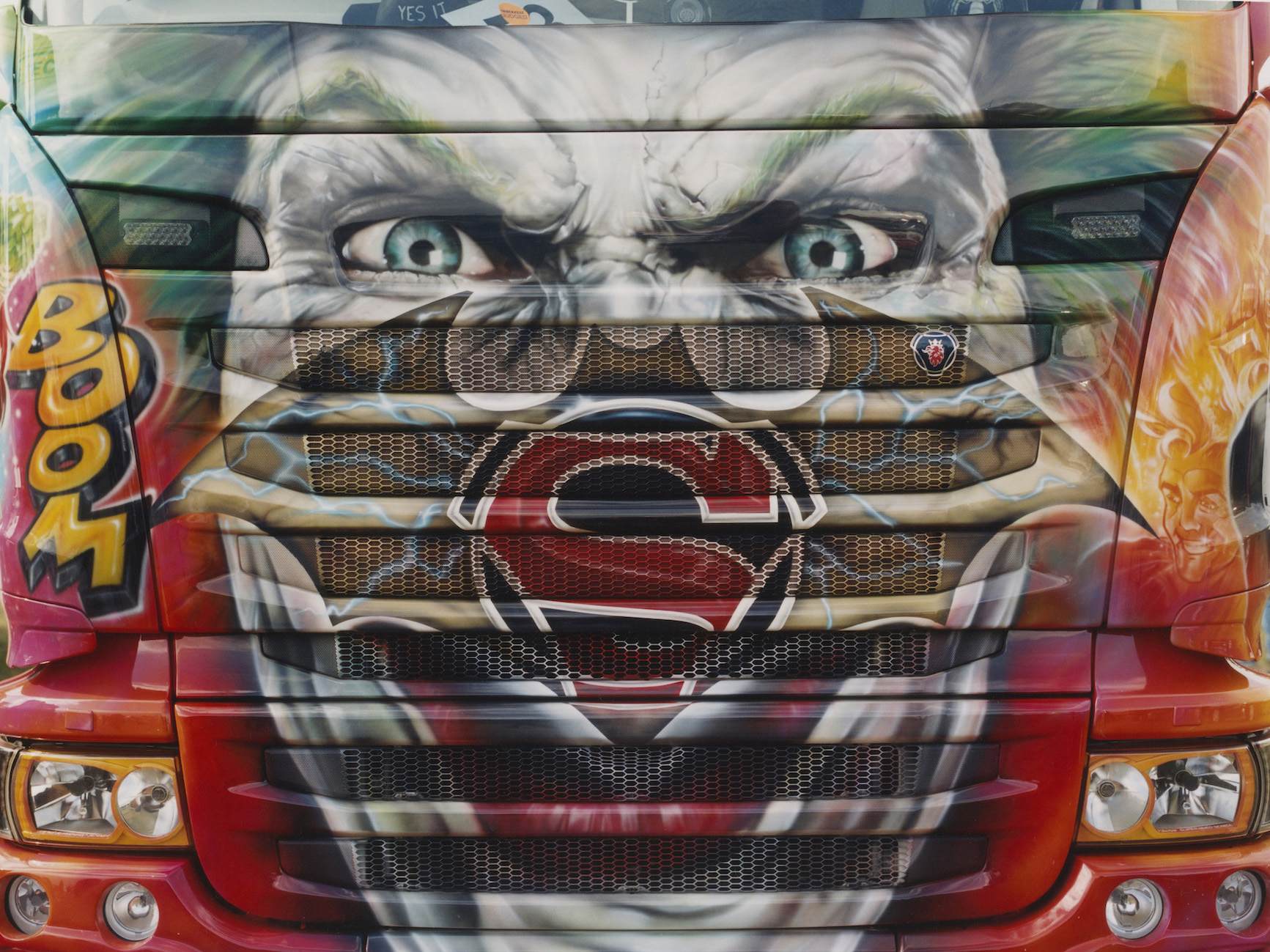 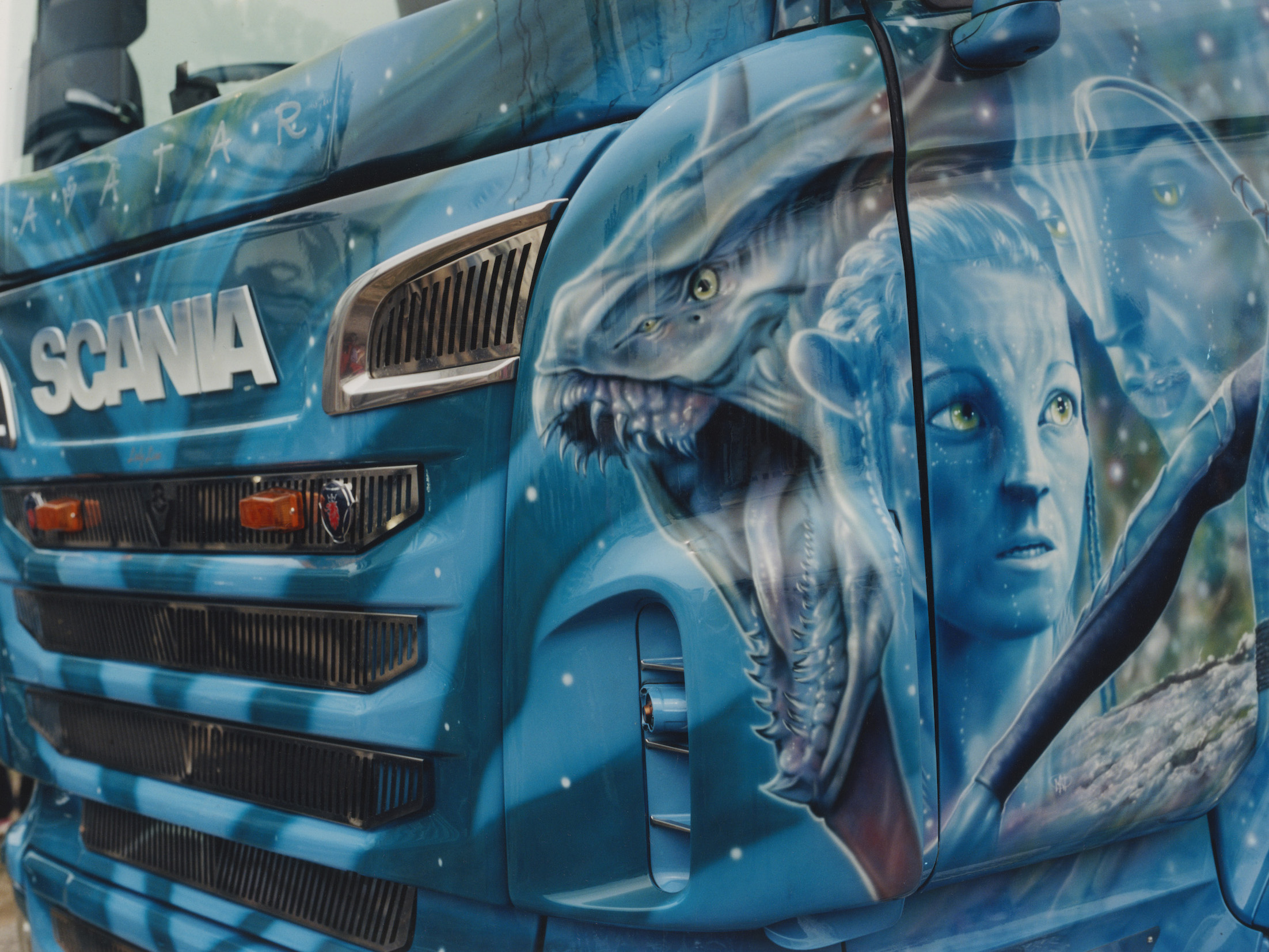 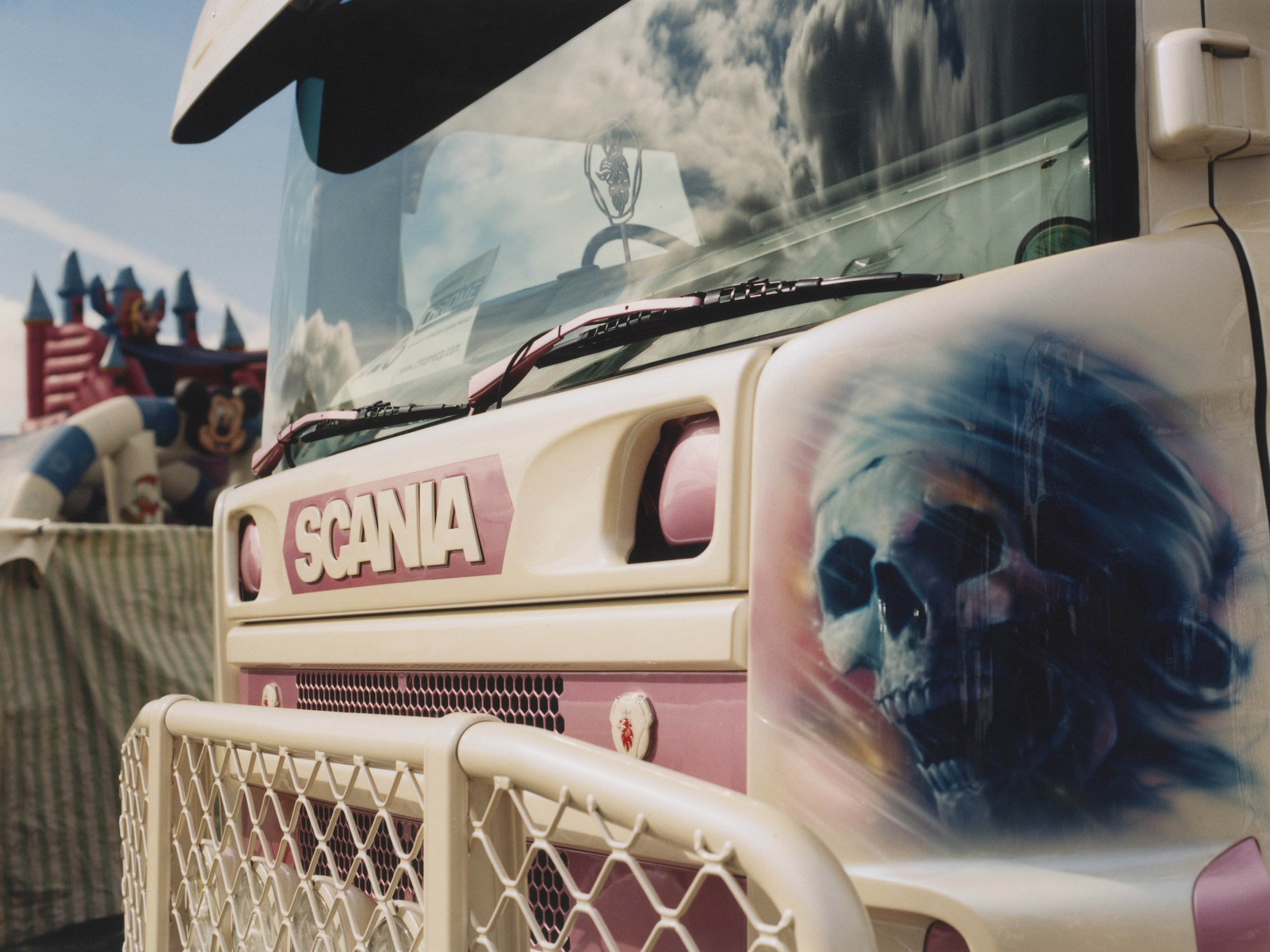 See more of Freddie Miller’s work on his Instagram.

Linkedin
OTHER ARTICLES
David 'Dee' Delgado’s photo project is about honouring and uplifting the city of his youth, and a world rapidly disappearing under the relentless onslaught of gentrification.
Taking us through one of the most dynamic years in recent history, Laylah Amatullah Barrayn new photo book contains tender yet confrontational portraits.
Yohon Tatum, aka Legendary Father of the House of Tisci, reflects on nurturing a new generation of talent.
Jeffrey Henson Scales intimate portraits and protest images of the BPP and its leaders offer a rare insight into organisation at a time of societal upheaval.
Mass crustacean die-offs in the North East have led a community of fishermen to take action to save their seas.
Zsófia Sivák’s ongoing project documents the country’s tavern culture, preserving a once defining part of rural life.