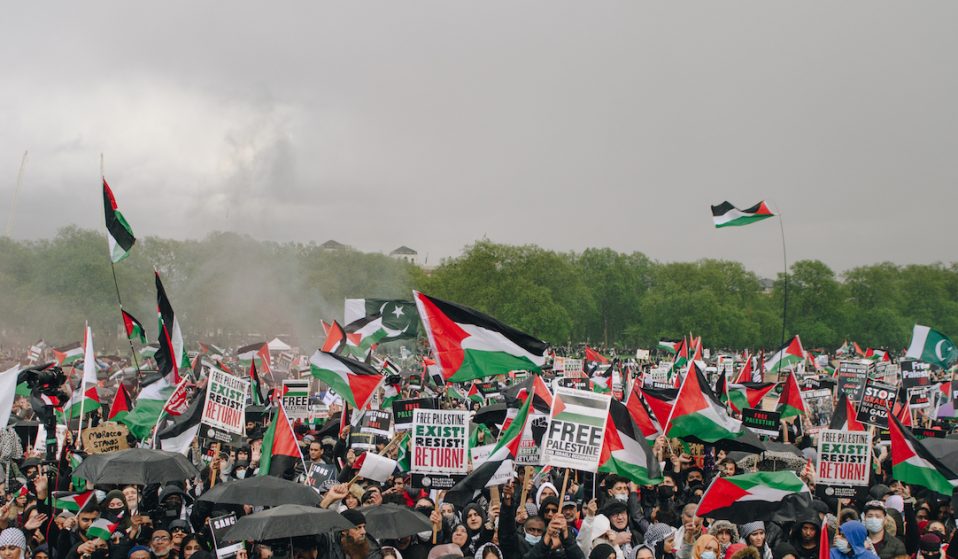 This weekend Londoners took to the streets in historic numbers to make clear that a ceasefire will do nothing to end Israel’s brutal occupation and that the fight must go on until Palestine is free.

This weekend Londoners took to the streets in historic numbers to make clear that a ceasefire will do nothing to end Israel’s brutal occupation and that the fight must go on until Palestine is free.

On Saturday May 22, hundreds of thousands of people took to the streets for a second weekend of action and protest in solidarity with the people of Palestine.

Despite the announcement of a ceasefire on Friday (May 21) after days of relentless Israeli bombing, Palestinians have continued to face violence. On the same day the ceasefire was declared, Israeli police stormed the Al-Aqsa Mosque compound and fired tear gas at Palestinians after Friday prayers. The following day (May 22), protestors took to the streets in London and other parts of the UK to make clear that the fight must continue until Israel’s brutal occupation comes to an end.

Around 180,000 people attended in London, making it the biggest pro-Palestine demonstrations in British history. Beginning in the Embankment the crowd snaked its way through London, passing Downing Street, Trafalgar Square, moving through Picadilly Circus and ending with a rally in Hyde Park.

Crowds were addressed from a temporary stage in the park by representatives of the anti-war movement, unions and political parties including Labour MPs John McDonnell and Zarah Sultana and ex-leader of the Labour party, Jeremy Corbyn.

Following the rally, a small number of demonstrators made their way through the park to the Israeli embassy in High Street Kensington. After an hour or so spent chanting at the gates to the embassy, the crowd, numbering a few hundred made their way through west London, where intermittent clashes with police ended with a violent kettle.

Our reporter and photographer, Aiyush Pachnanda, was among those kept in the kettle and despite presenting a press card, was prevented from leaving multiple times. He was there for the day to capture the action. 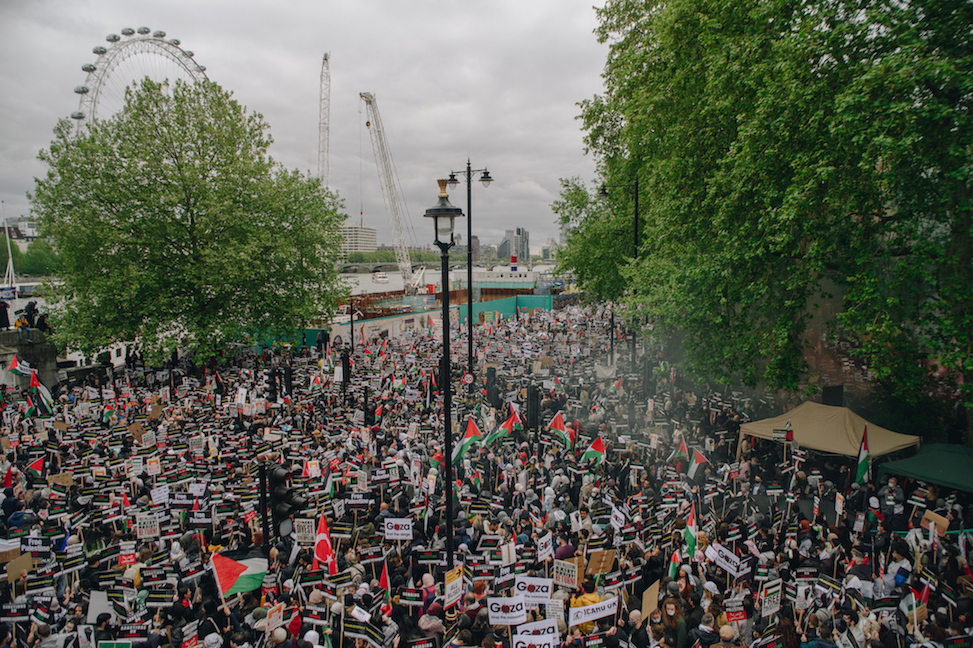 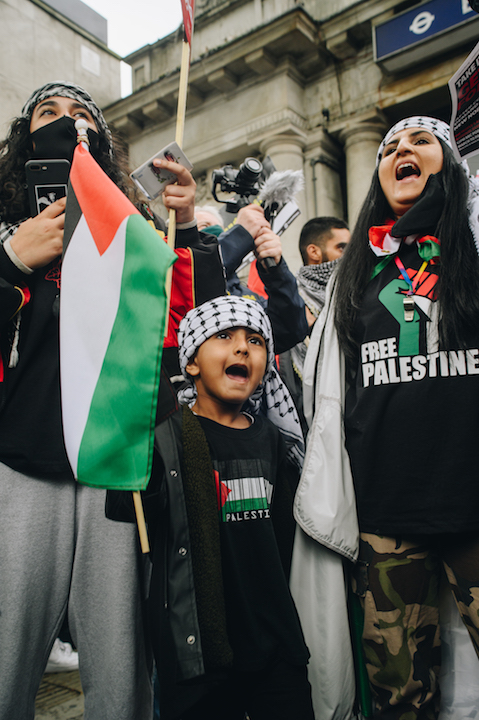 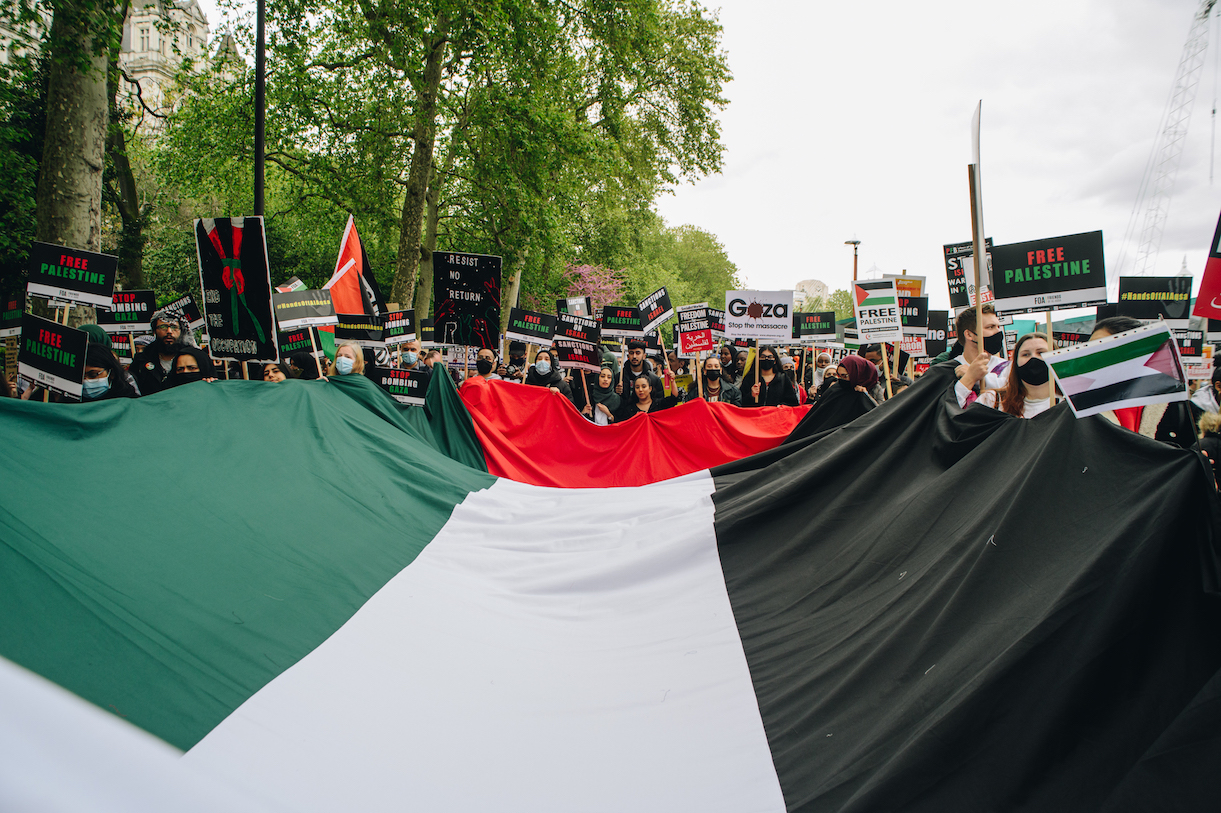 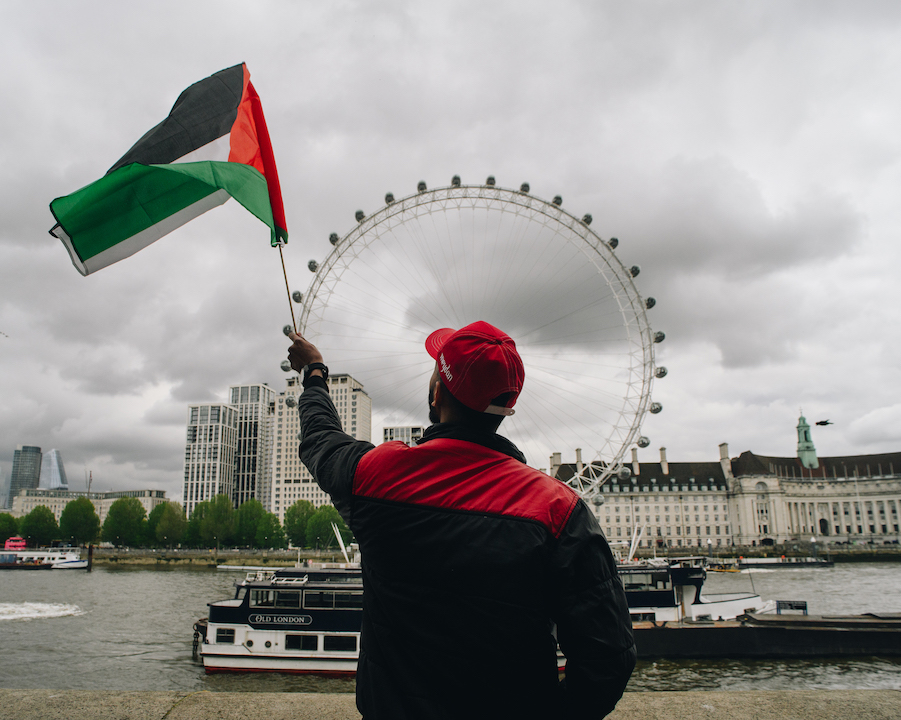 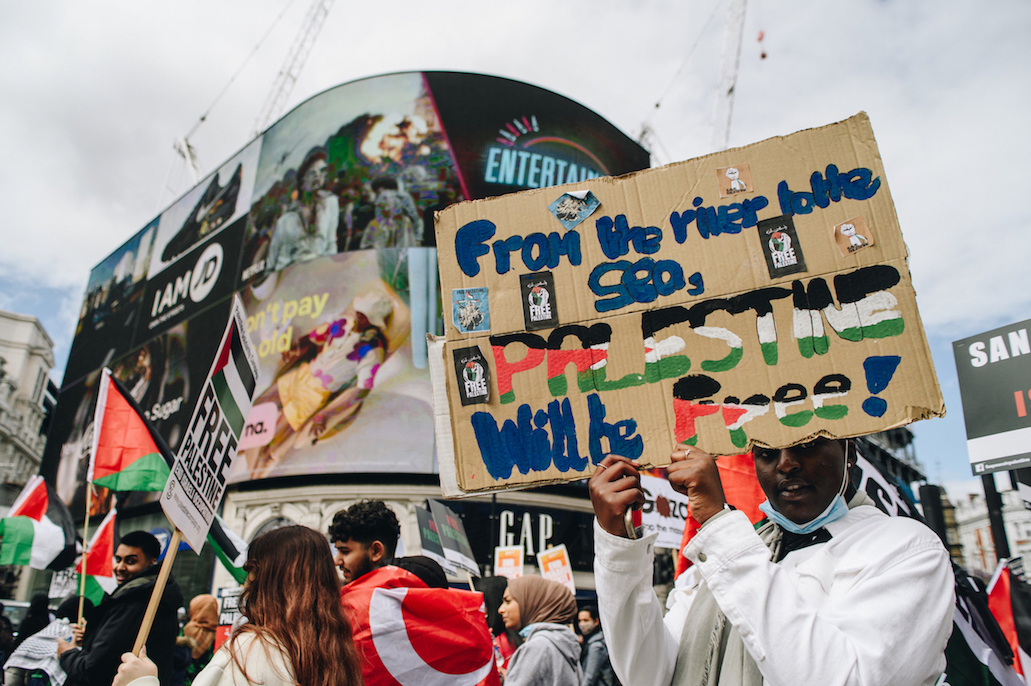 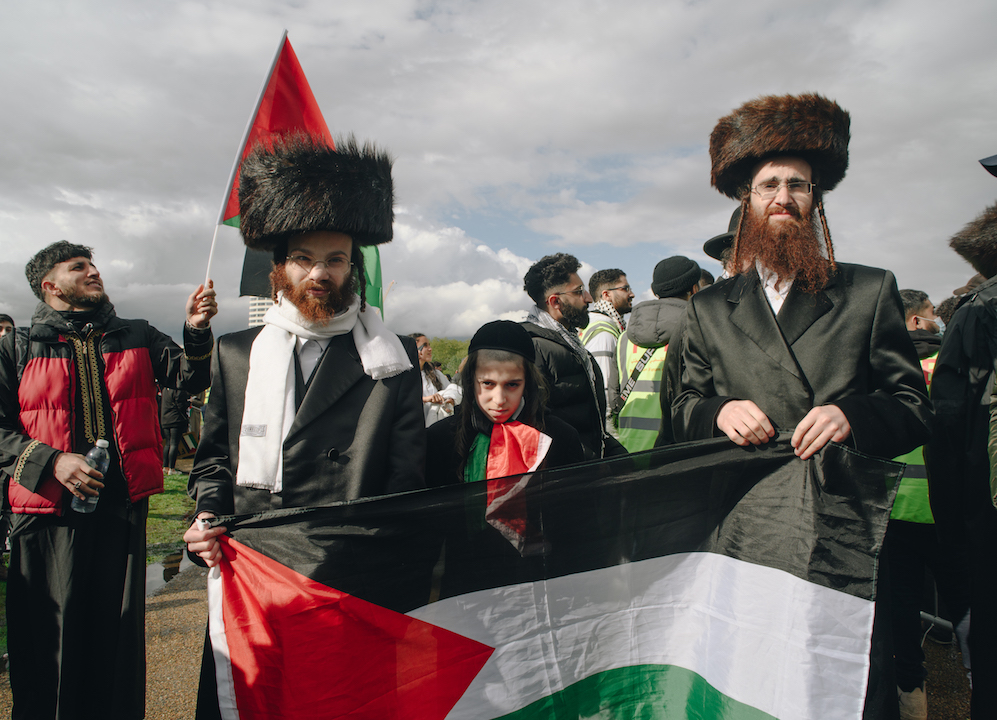 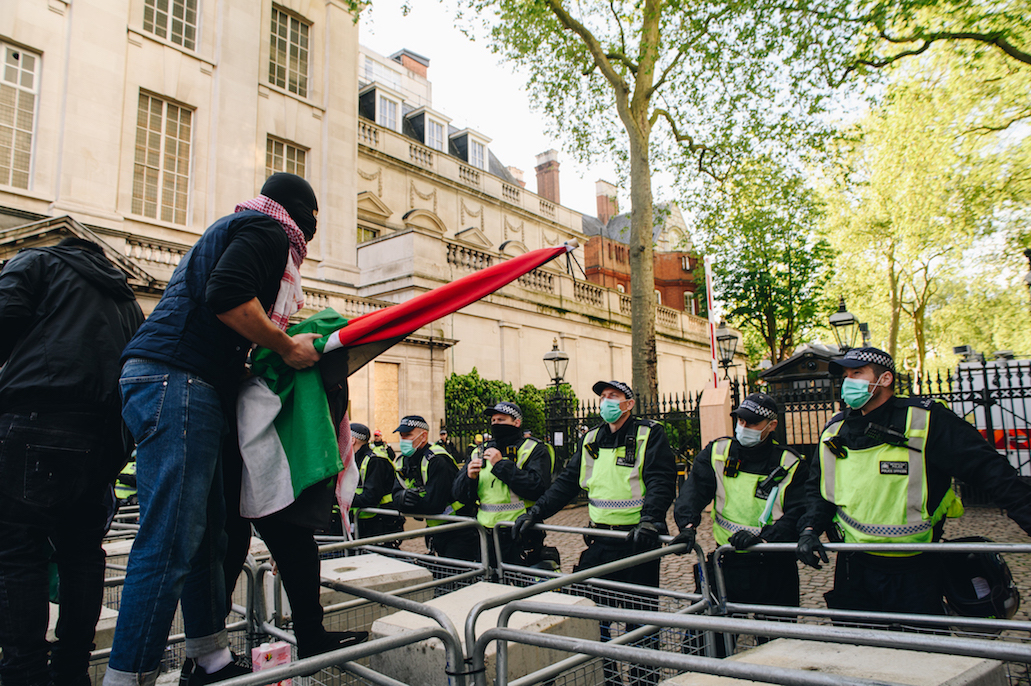 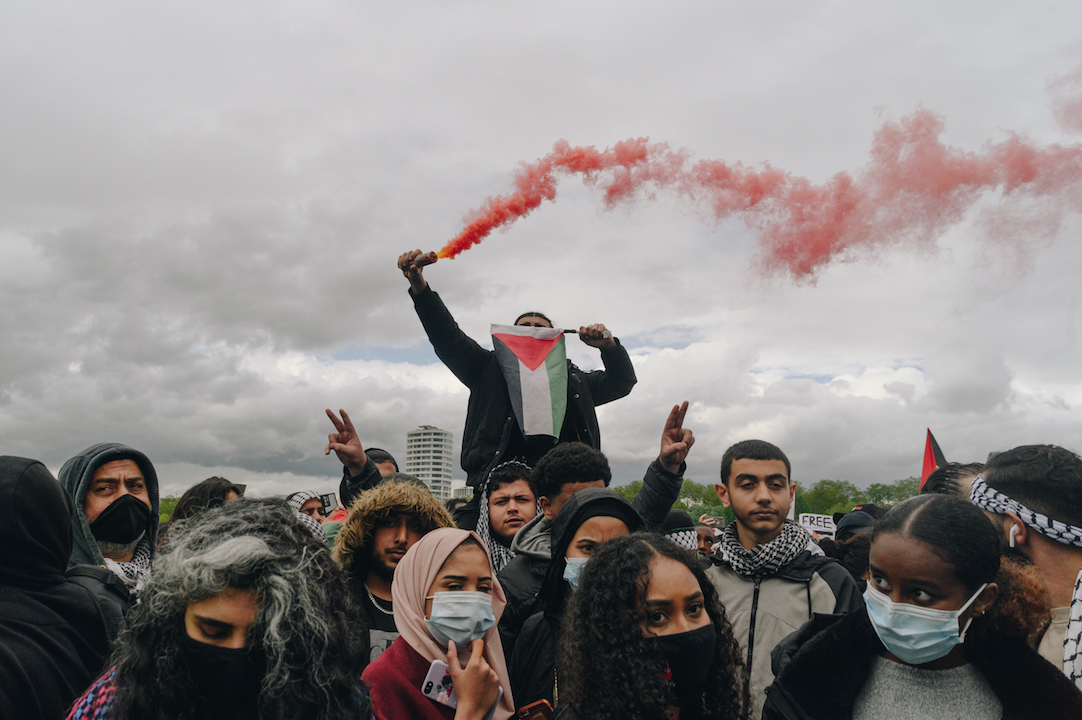 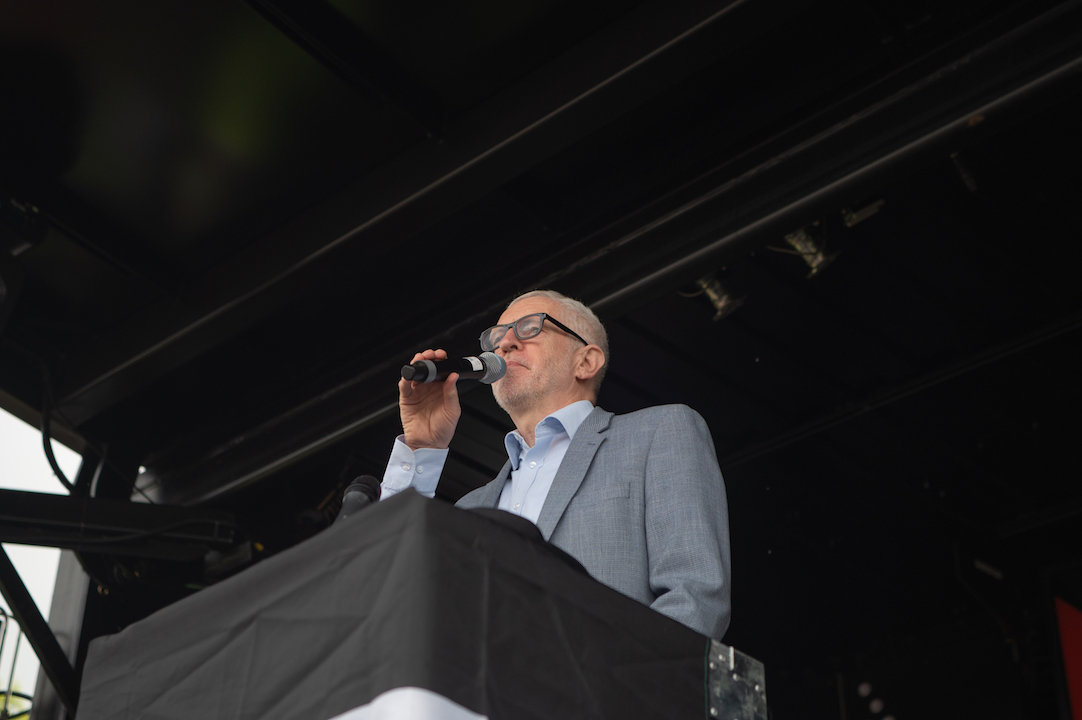 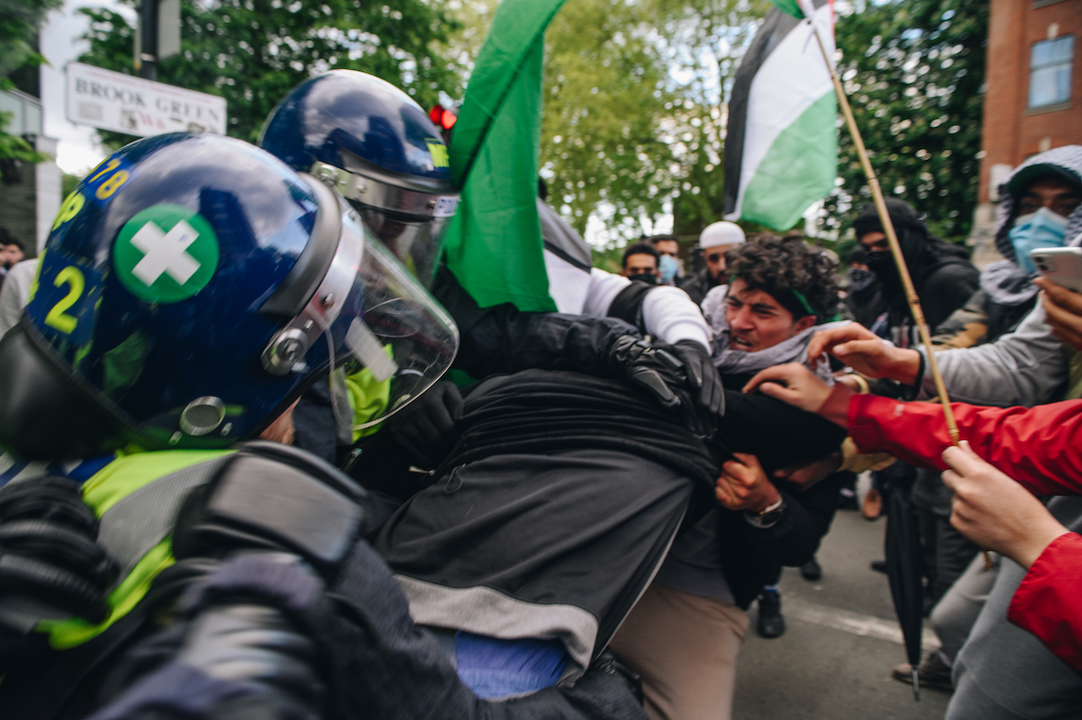 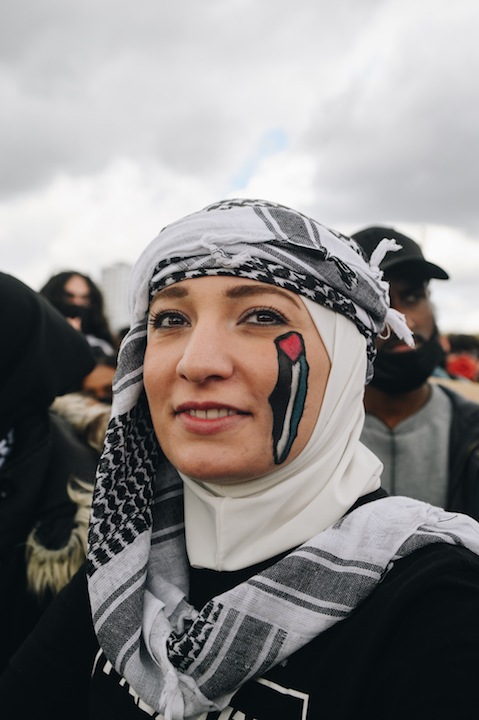 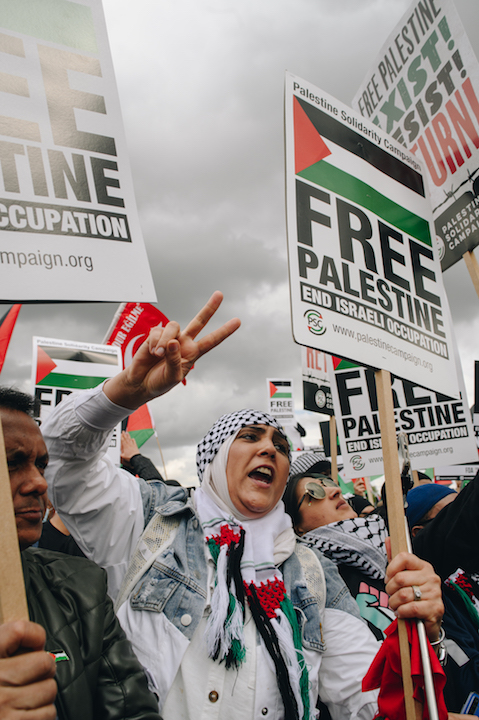 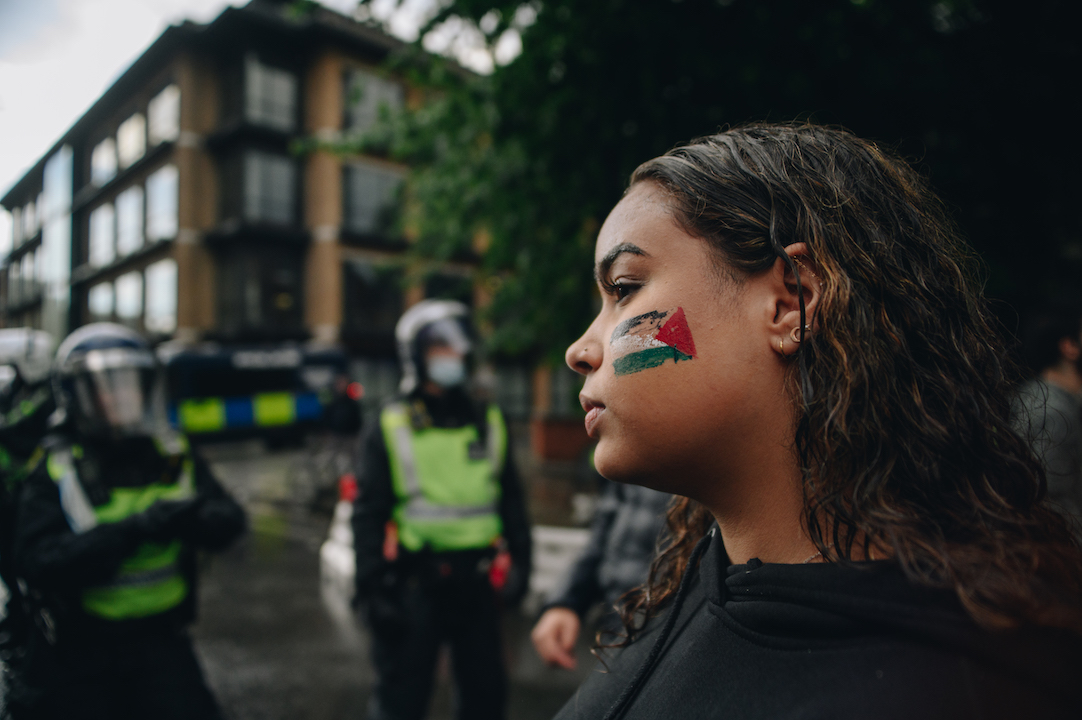 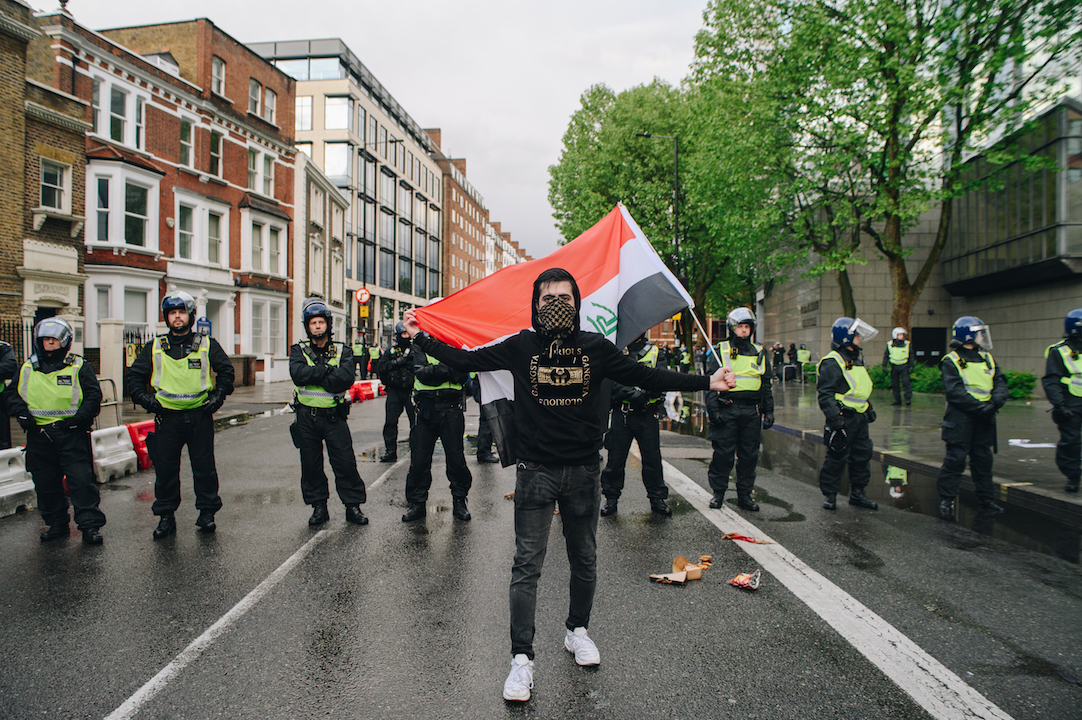 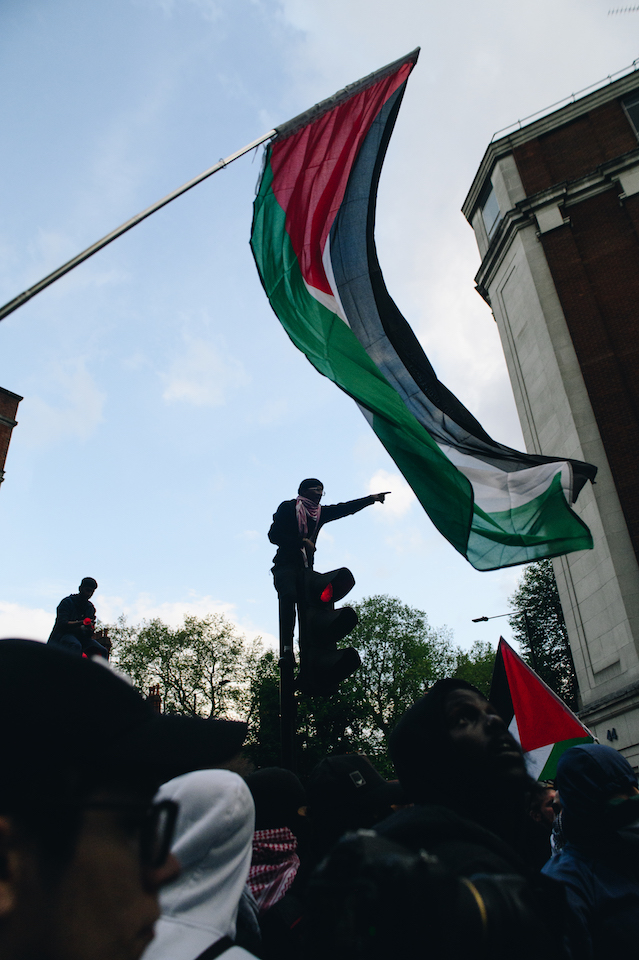 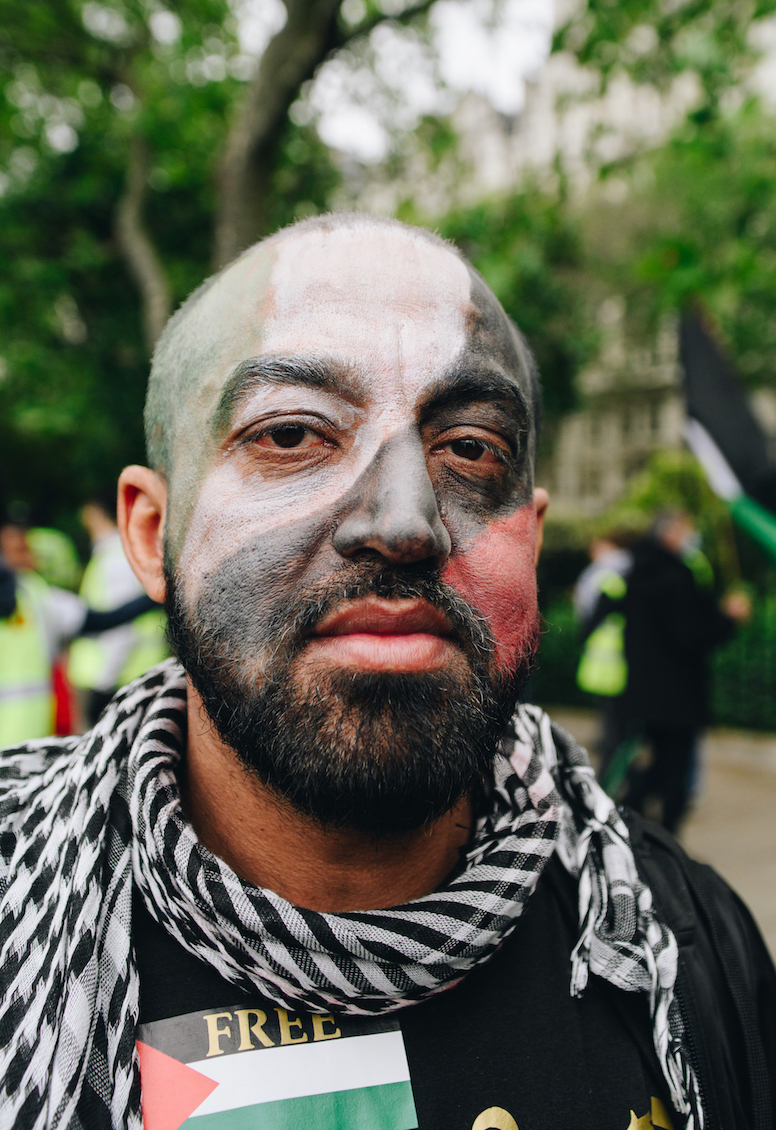 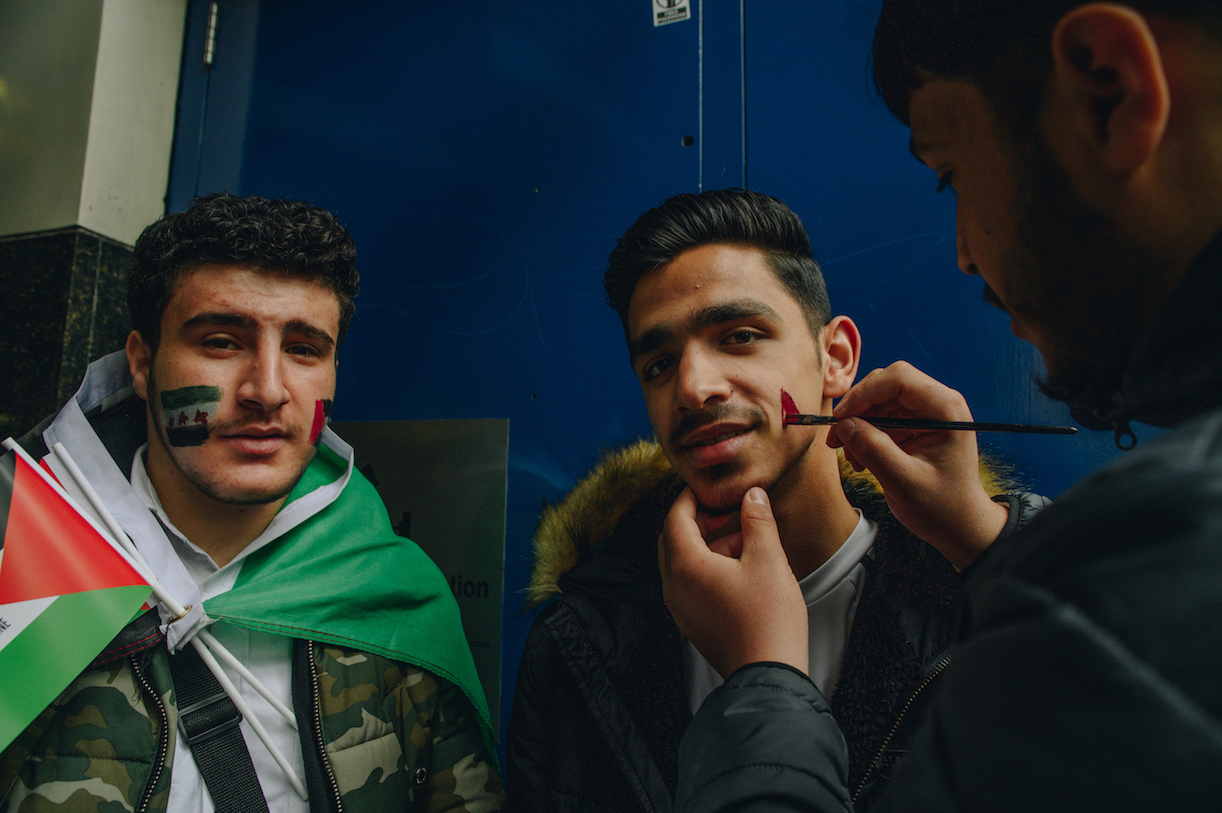 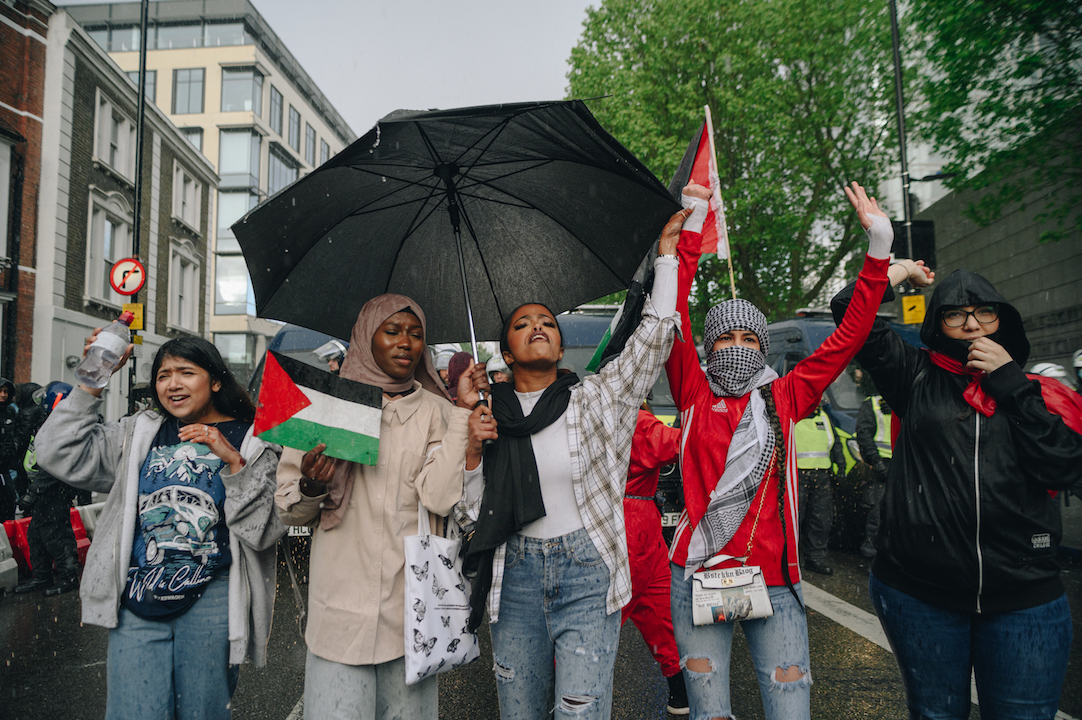 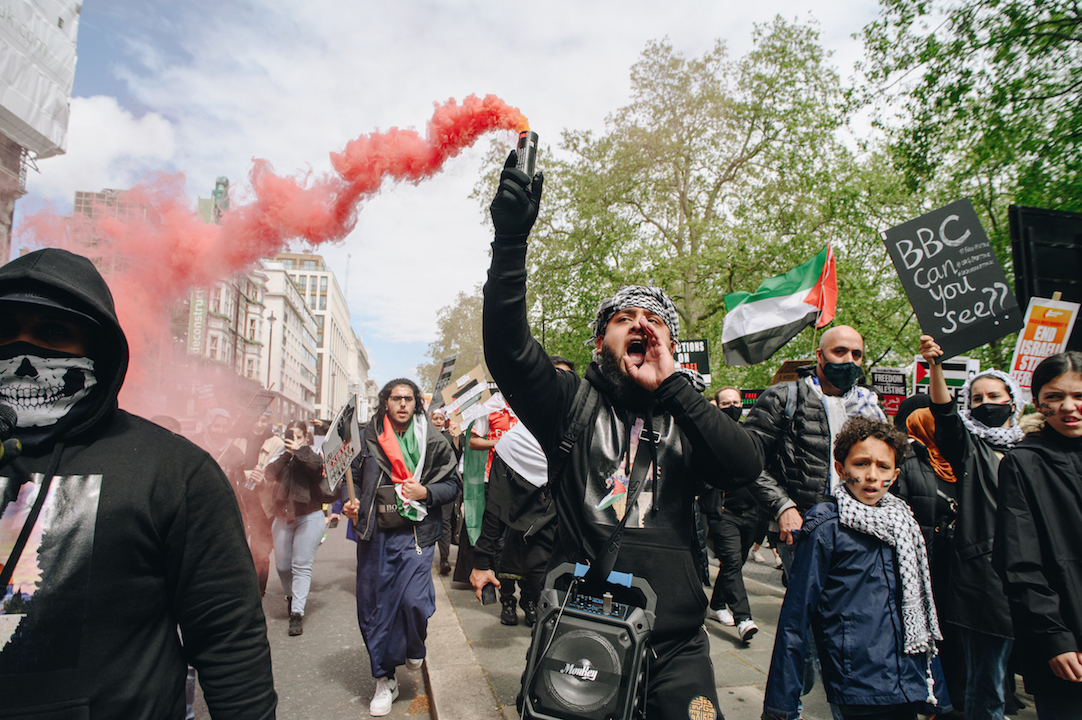 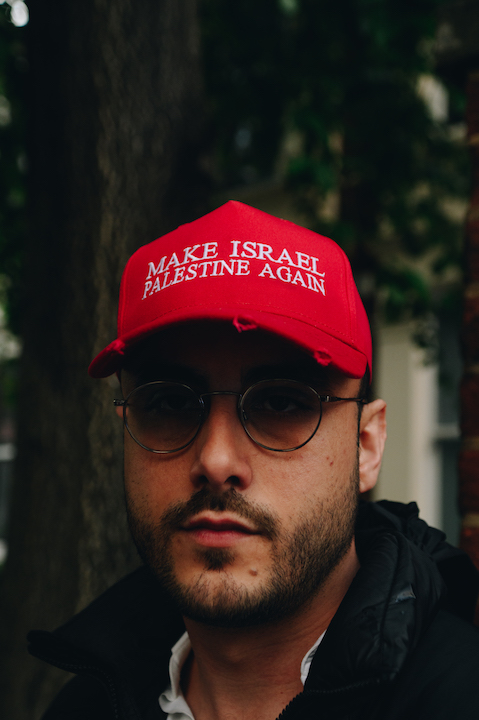 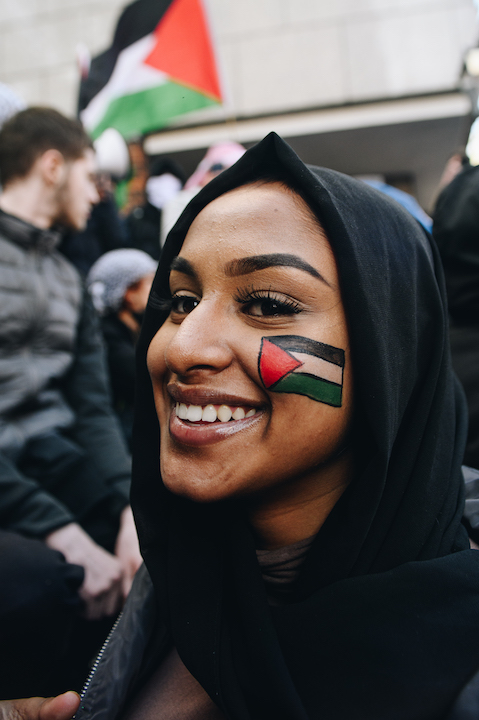 Linkedin
RELATED ARTICLES
OTHER ARTICLES
Members of the collective share some of their reasons to run as part of #UnitedBySummits, a campaign that looks to uncover transformative power of the outdoors.
Following the success of her debut novel, the Tottenham native is restating her commitment to the place that made her.
In the last of our dispatches from OFFF Barcelona, Rufus Deuchler and Vincent Gault discuss the future of creative process.
Over the weekend, London locals came together to resist a pre-planned police raid targeting delivery drivers.
A group of Ukrainians living in Poland are helping Ukraine withstand Russia’s brutal invasion by buying supplies and shipping them directly to the war’s frontlines.
The photographer recalls working with some of the biggest names in the business – from Salt-N-Pepa to the Sex Pistol – at a time when music magazines played a powerful role in shaping the scene.