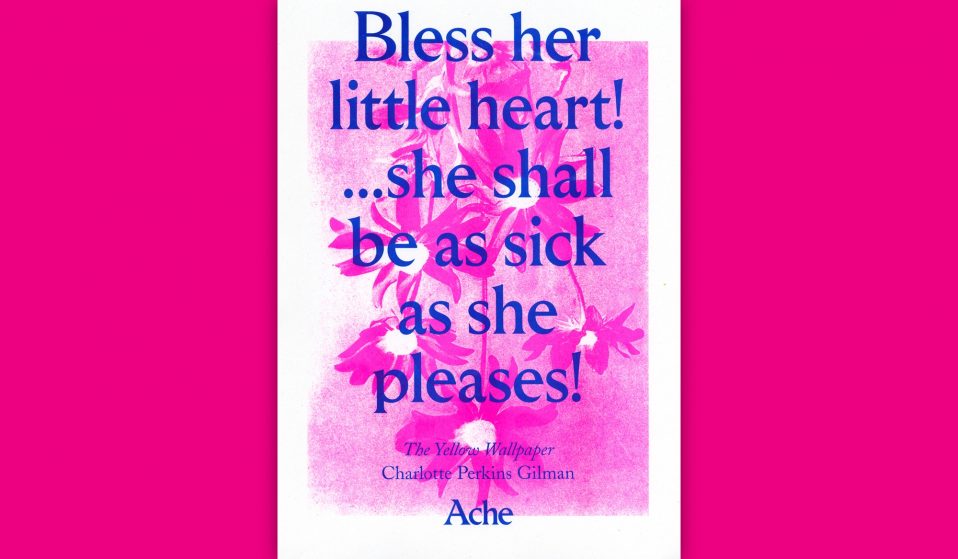 The intersectional magazine explores how women experience pain in a society that seems pitted against them. Here, writer Emily Reynolds meets co-founder Kirstie Millar: ‘our voices need to be heard and respected.’

The intersectional magazine explores how women experience pain in a society that seems pitted against them. Here, writer Emily Reynolds meets co-founder Kirstie Millar: ‘our voices need to be heard and respected.’

“GPs simply did not believe my own perception of my body,” Kirstie Millar tells me. “They refused to believe the pain I was experiencing existed.”

Kirstie is the co-founder of a new zine, Ache, which seeks to explore the inequalities women and non-binary people face when they try to get help for their pain.  A mixture of poetry, fiction, visual art and essay, Ache looks to redress this imbalance – or, at least, provide those going through it space to finally express their experiences.

Kirstie isn’t alone in her experience. Research has shown a persistent “pain bias” – women wait longer in A&E, for example, and are less likely to be given effective painkillers; on average, it takes eight years for someone to be diagnosed with endometriosis. Kirstie points out that there are additional barriers for other groups; women of colour, trans men and women, non-binary people. “Race, class, sexuality and gender identity can create extraordinary hurdles when seeking bodily autonomy and medical treatment,” she says.

It was with this in mind – and her own experiences with endometriosis – that inspired Kirstie to post a call for collaboration on Twitter in 2017. She was immediately contacted by Rosalind Reynolds-Grey, who joined as co-editor, and later by Katrina Millar (no relation), who completed the editorial team.

“I’m pretty sure I sent Kirstie an email within moments of seeing her initial call out for involvement with Ache in 2017,” Rosalind says with a laugh. “The concept of an intersectional feminist magazine which explored themes of illness, bodies and pain sat exactly within the fields I wanted to work in and advocate for.” 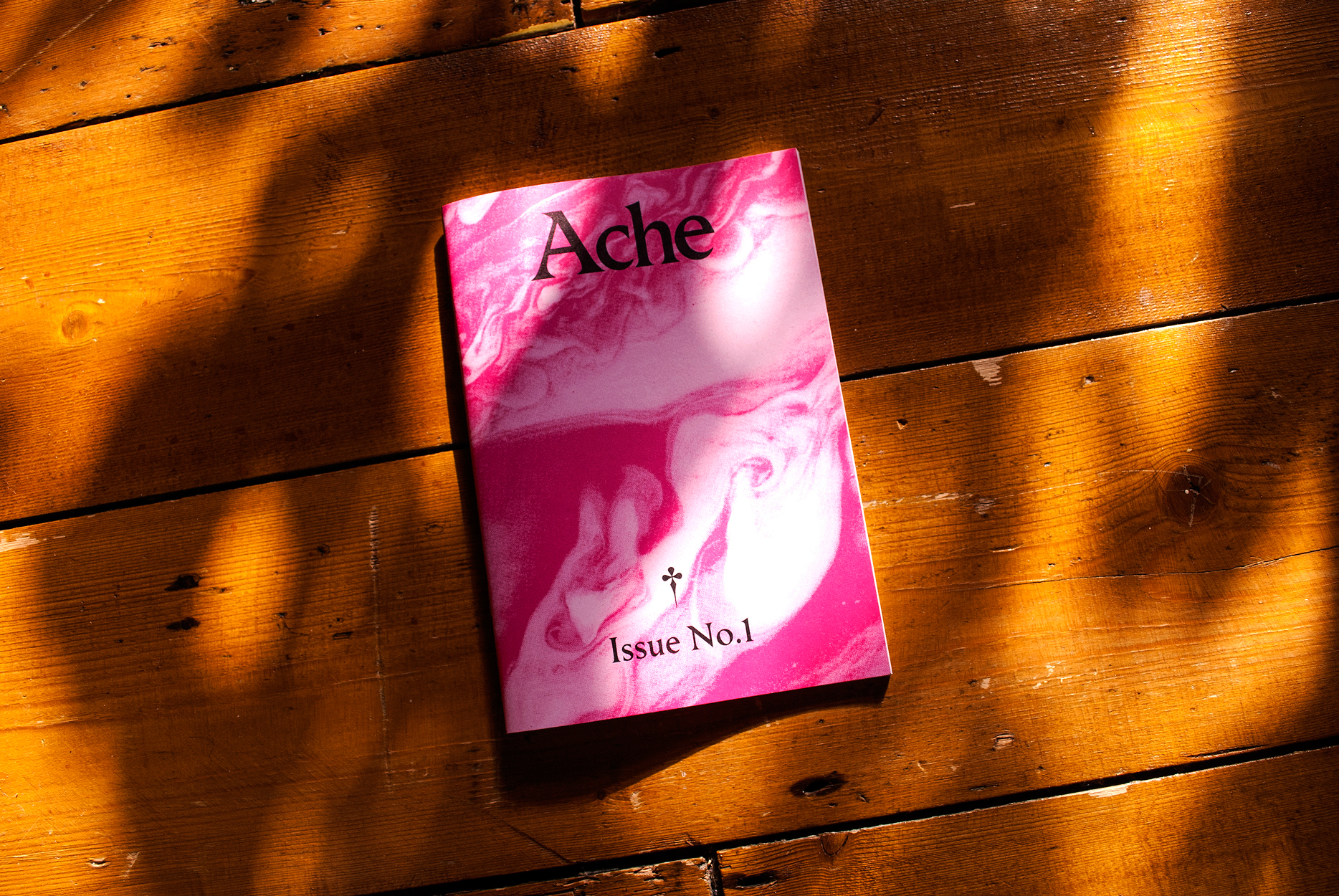 “As a woman with multiple mental health problems and experience of living with family members with chronic physical and mental illnesses, the aims of Ache seemed vital to me.”

All involved in the magazine have experience of illness in some form. Kirstie writes of her endometriosis, and her ongoing struggle to have doctors believe how much pain she’s going through; Rosalind of her father’s disability and her own struggles with mental illness. Katrina experienced an eating disorder and health anxiety after her mother’s diagnosis of breast cancer in her late teens.

But despite the divergence of their actual experiences of illness, they all have one thing in common: not being taken seriously. “When I was at university, a therapist I saw for depression said that I didn’t look thin enough to have an eating disorder after I opened up to her about my anxieties with food,” Katrina says. “The comment stayed with me – I wasn’t thin enough, there wasn’t a problem.”

“It’s only recently that I’ve actually processed how damaging attitudes like this are for vulnerable people experiencing mental health problems.”

Kirstie also points out the depth of the issue: “One of our readers, over the age of 70, wrote to us shortly after our launch to tell us that she was sad Ache even had to exist because the denial and belittlement our contributors explored mirrors her own experiences decades ago.” 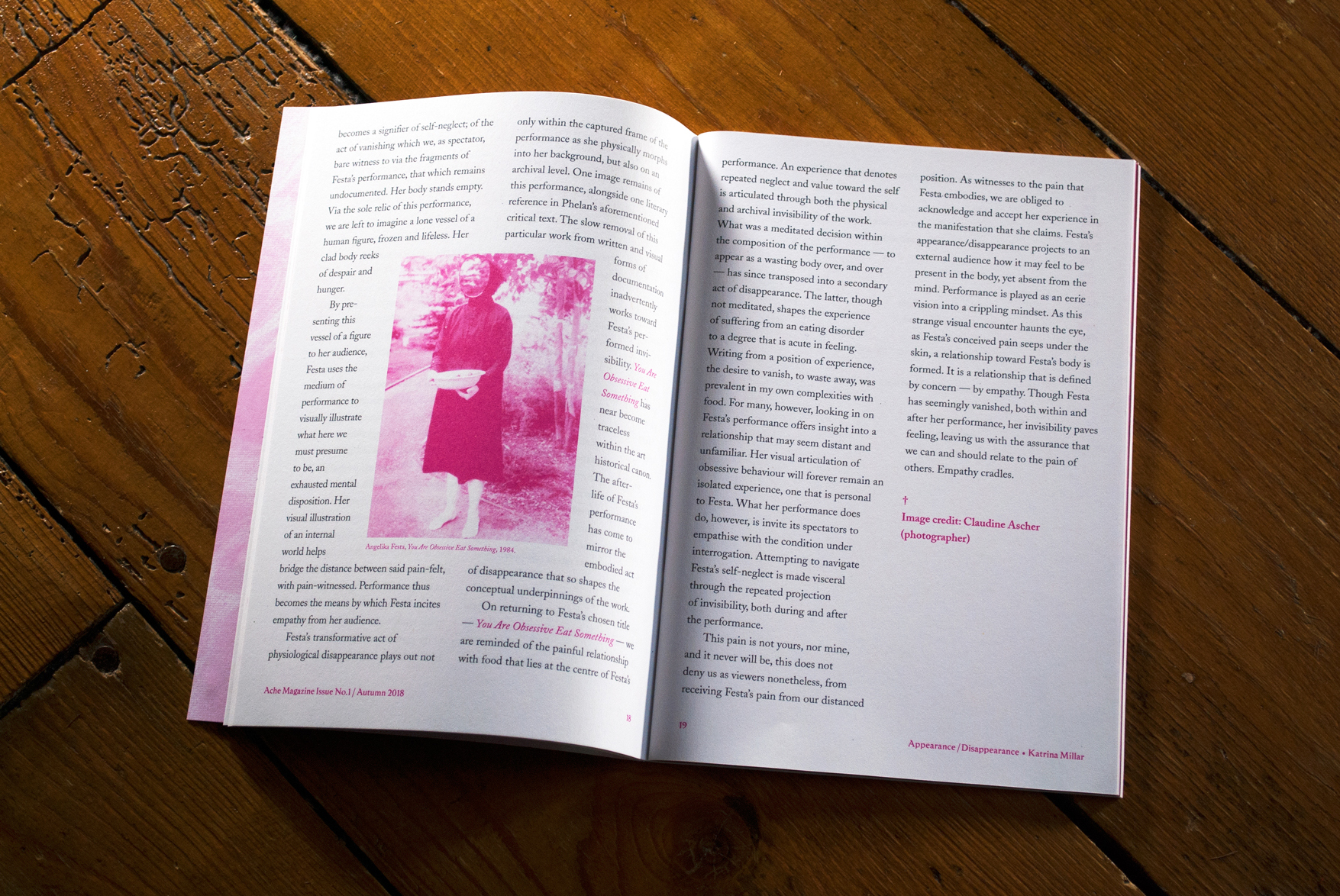 Community is key here, the magazine not only a safe space and of itself but also a launch pad for other endeavours. Ache’s first event, with authors Olivia Sudjic and Sharlene Teo, took place at the Second Shelf bookshop last week, and a reading group meeting to discuss the themes of health, pain and illness once a month.

“For me, Ache is primarily about that sense of community,” Reynolds-Grey says. “Connecting and understanding are so vital when living with any type of illness; through opening up discussions and creating this platform, we’re offering a space to connect and to make our voices heard.”

“It can be so frustrating to be disbelieved, or to feel so alone with an illness, but there is solace in knowing others have been there – and that there’s a space where you’ll be believed, and your experiences will always be deemed valid and worthy of discussion.”

At the heart of the project is a demand to be heard. “Believing us about our experiences and our perception of our own bodies is vital,” Kirstie says. “Our voices need to be heard and respected.”

“When our society derides our voices and belittles our lived experiences, this distrust can be amplified in the examination room, creating barriers to accessing the care and the medical treatment we need.”

“We are the authority on our bodies. We must be listened to.”

Learn more about Ache magazine on their official website.

Linkedin
RELATED ARTICLES
OTHER ARTICLES
Photographer Becky Tyrell went down to the fading banger and stock raceway to meet a community desperate to keep it alive.
Tristan O’Neill’s shots of dancers caught in moments of reverie at the height of rave’s golden age are a testament to the UK’s legendary club culture.
Theo McInnes’s photos of the annual event provide an intriguing snapshot of contemporary Britain.
A new law change is enabling Britain’s donor-conceived children to know the truth about their origins – but campaigners say the fertility industry must do more to protect people.
David 'Dee' Delgado’s photo project is about honouring and uplifting the city of his youth, and a world rapidly disappearing under the relentless onslaught of gentrification.
A new film from Berghaus traces the story of Adam Raja, who left behind a turbulent upbringing to discover the healing power of climbing.