Art & Culture / Print / How the hell do the British tabloids get away with it? 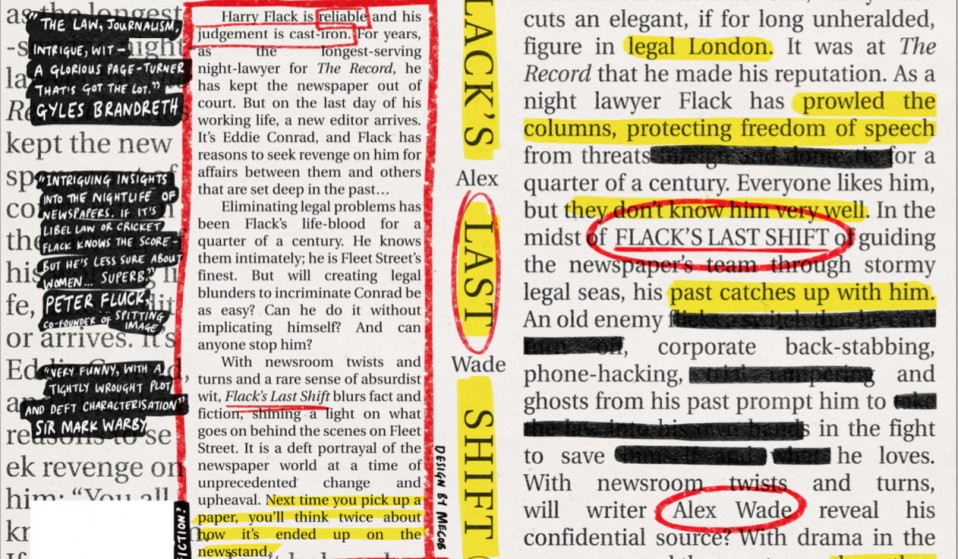 Tabloids regularly publish covers that seem to defame, but they get away with it. Huck lawyer Alex Wade explores the line separating free speech and libel.

UK tabloids publish covers that seem to defame on a regular basis – but somehow they get away with it. Huck's media lawyer, Alex Wade, explains the tenuous line separating free speech from libel – and why he's written a whole novel about it.

Huck‘s media lawyer Alex Wade has spent a life making sure the likes of us – as well as The Times, The Guardian and others – manage to keep publishing without getting sued. And now he’s written a novel about it.

Loosely based on his days legaling copy at The Times, Flack’s Last Shift is a pretty spectacular effort in narrative storytelling. Think about it: to turn a story about an average, most definitely pedestrian middle-aged media lawyer into a compelling tale of personal revenge is no small feat.

In his fourth book and first novel, Alex takes us deep into the arcane world of night lawyers: the guys who go through copy to ensure it’s ‘legal ok’ before a newspaper goes to press. Did you know that actually took place, day in day out, and these days, hour after hour, at every single newspaper across the land? The goal is to minimise the risk of lawsuits – typically libel but also actions like contempt of court and copyright violation – before the thing goes to press or is pushed live on the site. Harry Flack is our hero.

Early in the book, we learn that Flack has endured punishing betrayal and heartbreak at the hands of an arrogant, but highly ambitious, journalist. Decades later, Flack has the chance to wage the ultimate revenge: his nemesis is now the editor-in-chief, and Flack has all the power in the world to turn the guys’ first issue into the most libellous, contempt-filled, copyright-infringing newspaper edition in history.

Now when it comes to media law, I’ve always had quite a few questions but never had a chance to ask them. For example: how does The Sun get away with a cover like this? I mean, it’s full of lies, Corbyn is neither a ‘terrorist friend’ nor is he a ‘destroyer of jobs’. 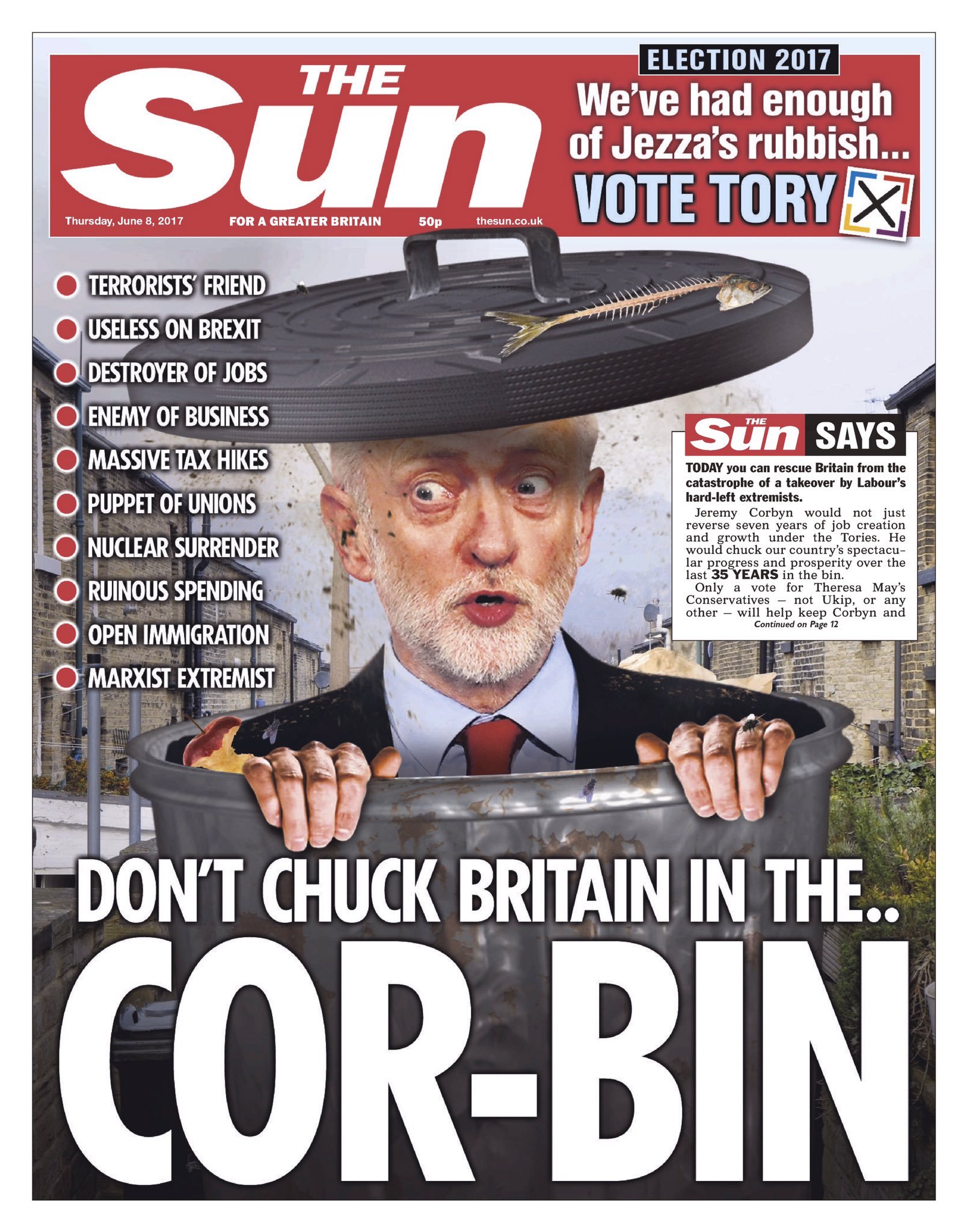 And how about the The Daily Mail. My question is: how do they not get sued by these guys in wigs? From what I can tell, they’re judges – so clearly not ‘Enemies of the People’. 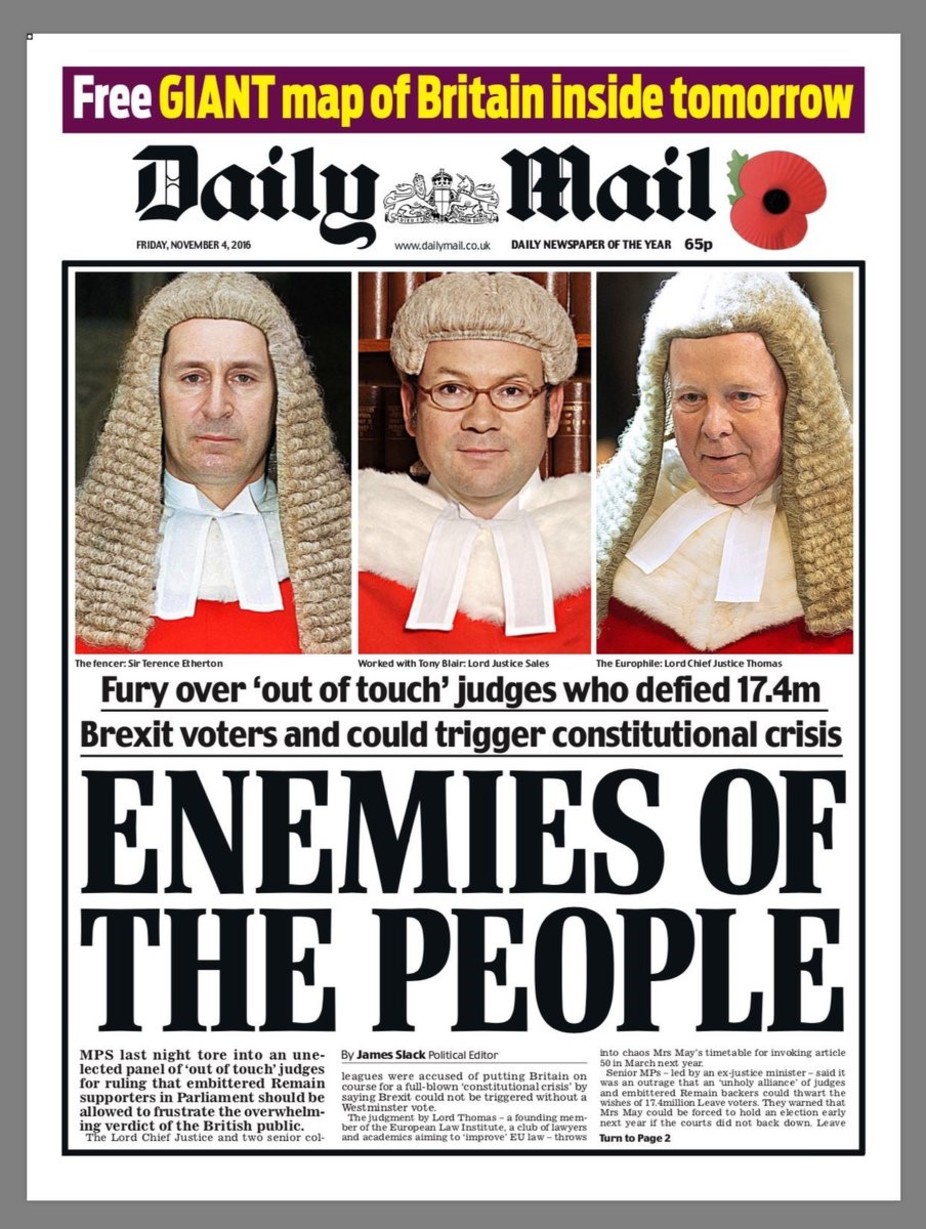 Or how about this from The Daily Express. Straight-up Islamophobia in my book, inciting hatred… is’t that a crime? And yet, no lawsuit. Alex, I’m confused…

Do newspapers get sued a lot?
Not as much as back in the 80s and 90s – the heyday of libel trials which would often be front page stories in themselves. But while fewer cases end up in court, on a daily basis newspapers receive scores of letters of complaint.

What are the most common lawsuits?
Libel used to be the main one, but while it’s still a worry in today’s world, privacy and data protection claims are often made. Copyright infringement is also an issue. Perhaps the most serious is contempt of court – when proceedings are brought by the Attorney General in cases where there may be a ‘substantial risk of serious prejudice’ to an ongoing criminal trial. The sanction for flagrant contempt isn’t just a hefty fine; an editor can also go to prison.

Can you talk us through a famous case?
It happened a while back but it’s still a cautionary tale for any editor… Silvester Bolam was the editor of the Daily Mirror between 1949 and 1953. Three months of his tenure was spent in prison: Bolam was convicted, in 1949, of publishing material that could have prejudiced the trial of John George Haigh – the infamous Acid Bath Murderer.

A lot of newspaper covers seem to cross a line into hate speech and defamation? Is that the case, or am I being naive?
You’re not being naive. Some recent front pages by the right-wing press have been extraordinary.

Let’s look at that Corbyn election day cover – how do they get away with it? I mean, he’s not a terrorist’s friend – neither is he any of the other allegations for that matter.
You’re right – technically the cover is highly defamatory of Corbyn. However, there’s an unwritten rule that politicians will take this kind of thing on the chin, and that’s what they tend to do. Looks like Corbyn had the last laugh, too…

And how about this Daily Mail one, ‘Enemies of the People’, really?!
Again, it’s clearly defamatory. In no way are the judges really ‘enemies of the people’. But while they could have sued, they chose to rise above it. The correct response, some might say, to anything the Mail does.

How about this? Please tell me this is some kind of hate crime.
Another ludicrous cover and in many ways it could be construed as a racial hatred offence under the Public Order Act 1986. There are other offences that could catch it, too, in the Criminal Justice and Public Order Act 1994 and Racial and Religious Hatred Act 2006. However, in the UK there is a longstanding tradition of tolerance for the expression of differing religious views. Offensive though the cover is, it’s the kind of thing that’s more likely to result in a rap on the knuckles from the Independent Press Standards Organisation than actual legal proceedings.

Do newspapers expect to get sued, and do they have a pot of cash set aside for court cases?
Newspapers do expect to be sued, yes. Some have insurance, others self-insure – i.e. they put aside a large pot of cash to deal with legal problems.

Are average people able to sue, or do you need to have tons of money to take on someone like The Daily Mail, and hence this becomes the preserve of rich people and corporations, or famous guys like Hugh Grant (who’s also of course rich)?
Libel used to be regarded as a rich man’s game but in fact the average person can sue, thanks to the availability of no win, no fee arrangements. Curiously, though, those very same no win, no fee deals are usually how the rich bring libel claims, too.

What do you make of pressure groups such as Hacked Off, do papers feel the heat or do they not care?
The papers definitely do care. Well, most of them do. Post-Leveson, they’re much more careful. Some, though, remain a law unto themselves. There’s one especially that seems to have an agenda all of its own. I’ll leave it to you to work out which one that might be…

What’s your personal take on free speech and its limits?
I agree with what people often attribute (wrongly) to Voltaire: “I don’t agree with what you say but I will defend to the death your right to say it.” In other words, people should be free to say what they like – and take the consequences if, in doing so, they transgress reasonable legal thresholds.

America has a much freer press than the UK, is that right?
Yes, that’s true. Contempt of court is almost unheard of and the libel laws are lighter, in that often ‘actual malice’ has to be proved before a claim can succeed. That said, here it’s commonly accepted that £200,000 to £250,000 is the upper limit for damages, which are decided by a judge (though the losing side pays the lawyers’ costs, too, which could be more than those sums). In the US, compensation is decided by a jury, and US juries aren’t averse to handing out astronomical awards of $1m and more.

Isn’t prior restraint a pretty absurd legal concept in this day and age?
Yes, though technically we don’t actually have a prior restraint system. Occasionally injunctions are sought and granted, but for the most part the UK operates on the basis that people should be free to say and write what they like – though as I mentioned, they have to take the consequences if they go too far.

One thing that often strikes people as daft is preserving an injunction when the horse has bolted – for example, when Twitter has gone crazy and, for example, everyone knows the identity of someone theoretically protected by an injunction. That said, there is a good counter-argument: survivors of rape have a lifelong, automatic right to anonymity. If someone on Twitter publishes a [survivor’s] identity, does that then justify the mainstream media doing so? Or if it’s published in one jurisdiction, is it fine for it to be in another? I don’t think so.

Do you miss being a night lawyer? What did you enjoy the most, and also what did you dislike about the job?
I’m still very much in the trade. I work for a law firm called Reviewed & Cleared – we specialise in pre-publication law. But these days the copy can be sent through the ether. I work from home and rarely have to be in a newspaper or publisher’s building anymore. It’s a change that’s great in many ways, though I miss the buzz of a newspaper going off stone. There’s a real energy as the whole thing comes together.

You mention you’re an ex-skater. Why’d you stop?
Too many injuries! But working from home and living near the coast means I can get a surf in every now and then. I used to miss the sea a lot when I worked in London.

What’s the future of night lawyers?
The NLs, as they’re known, will be in business for a long time to come. The law is no more than a mirror to human life: full of contradictions, complexity and confusion. Grey areas are everywhere. NLs help find clarity amid the mayhem.

Alex Wade’s Flack’s Last Shift is published in paperback by Blue Mark Books on 6 July. Alex is appearing at the Penzance Literary Festival to talk about the book on 7 July, at 6.30pm at The Acorn Theatre.

Linkedin
RELATED ARTICLES
OTHER ARTICLES
The idea that a younger generation is abandoning work has become a popular narrative online, but it doesn’t necessarily reflect reality.
In his 2008 series, the photographer pictured himself as Angela Davis, Martin Luther King Jr., Malcolm X, and other prominent figures.
A 37-year-old woman shares how her abortion led her to become a clinic worker, and the abuse she’s received in that role.
Cindy Campbell recounts how her brother ushered in a new era of musical culture at a party she held in the Bronx in ‘70s.
With skyrocketing rents, packed out viewings, bidding wars and more, renting in London has never been harder.
Birdy Chu reflects on documenting the historic moment in which the territory was formally passed back from the UK to China.