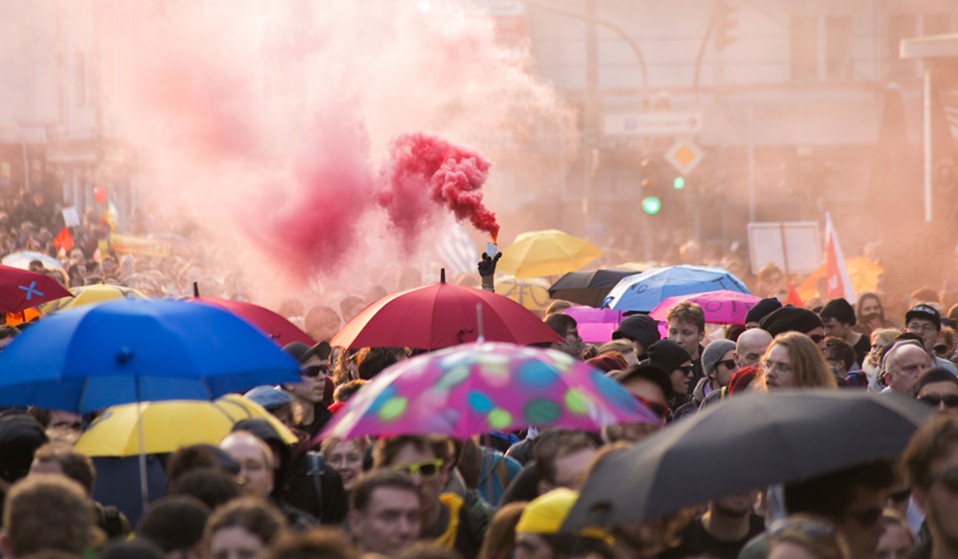 Paul Mason’s provocative theory argues the building blocks for a postcapitalist future are all around us. But can a young, tech-savvy grassroots overturn entrenched elites and rewrite the rules of the game?

Paul Mason’s provocative theory argues the building blocks for a postcapitalist future are all around us. But can a young, tech-savvy grassroots overturn entrenched elites and rewrite the rules of the game?

“All these old men in their cardigans sitting at home going, ‘Oh, Laurie Penny is outrageous’ or, ‘Transgender, what is that?’ It’ll be seen as a just joke in ten years time,” explains author and journalist Paul Mason. As Channel Four News economics editor, Mason has been at the frontlines of the financial crisis that has rocked the globe since 2008. Watching events unfold – from the collapse of Lehman Brothers; the emergence of Occupy, the Indignados and the Gezi Park protests; to the election of Syriza in Greece – has convinced him that the dislocations we’re witnessing today aren’t a blip, they’re the death throes of neoliberal capitalism. His book, Postcapitalism: A Guide to our Future argues we’re on the brink of seismic change – and a young, smartphone-wielding generation will be the ones who usher this new postcapitalist world into existence.

When I arrive at his publisher Penguin’s HQ, Mason is perched on a side-office windowsill, his knees pulled up to his chest like a child as he barks into his mobile phone. While economics news is usually delivered by dull men in suits reading from a predictable boardroom-friendly script, Mason went viral after losing his temper outside RBS headquarters and despairing at why no bankers have been prosecuted – despite multiple scandals and evidence of wrongdoing. A former Northern Soul-boy, he worked his way up to the top economics job at Channel Four News through an unconventional route: studying Music and Politics, then lecturing in Music at Loughborough University before moving down to London to become a freelance journalist, specialising initially in technology.

Postcapitalism offers a terminal diagnosis of the current order and a glimpse of what a new world might look like – and its seeds are already visible around us. When The Guardian published a compressed version online, the response was huge, demonstrating the hunger for a more critical analysis, new ideas and a brighter future beyond austerity.

In short, Mason argues the rise of information technology has pushed capitalism beyond its capacity to adapt by dissolving markets, destroying ownership and breaking down the relationship between work and wages. As stagnation leads to social crisis, armed conflict and the erosion of democracy, a more dynamic force will emerge to reshape the economy around new values.

“By creating millions of networked people, financially exploited but with the whole of human intelligence one thumb-swipe away, info-capitalism has created a new agent of change in history: the educated and connected human being,” he writes, who will use parallel currencies, time banks, cooperatives and self-managed online spaces to build a postcapitalist world.

The success of open-source, not-for-profit projects like Linux and Wikipedia and web-enabled movements like #BlackLivesMatter and the Arab Spring have demonstrated the economically disruptive and democratising potential of the internet. However, there are two major obstacles to our advance towards a more decentralised and equitable distribution of economic and political power: the concentration of tech monopolies and the collusion between big data and security services – as demonstrated by Edward Snowden’s revelations.

As he acknowledges in Postcapitalism, when in previous eras five to seven major players might compete in a given sector, now it’s often just two to three, and in some cases, such as Amazon, one company has near total dominance. “Monopolies can achieve amazing things for a time, but they always fall apart,” he says, dismissing the trend for ever-greater concentration online. He uses the example of Apple’s iTunes to demonstrate that companies who stand in the way of the free flow of information and attempt to monopolise socially produced information won’t be able to survive – as iTunes’ falling market share might suggest.

Markets work out prices based on scarcity (supply and demand), but when the supply of a song on iTunes is infinite, the 99p pricing is arbitrary – and unsustainable, he argues. As more and more of our lives become freely and infinitely replicable ones and zeros, and the production costs of physical items to fall to insignificant levels, it will destroy the market’s ability to set prices and alternative forms of exchange will rise to dominate. “We’ll know we’re in a postcapitalist world if people go on producing things when their value is zero,” he explains.

Mason seems unfazed by the collusion of governments and powerful tech companies. “I think we can easily sort out privacy, I’m more worried about the untrammelled power of the corporations themselves,” he explains. “Impose privacy doctrines on states. We can evolve tools and tactics to get around state surveillance that aren’t watertight, but the more embedded they become in ordinary people’s practice, it’s going to fuck the state up a lot, it’s going to piss them off. It makes it difficult for them to do things. What they really want is our consent.”

In Southern Europe, he’s been inspired by people standing together to resist, and witnessed the development of non-economic solutions that offer a blueprint for a postcapitalist future. “What the crisis did was it forced ordinary people to do things that up to then only hippies had done,” he explains. “So, squatting places, seed banks, time banks, car pools, basic things like that.” He cites academic Manuel Castells who’s documented the rise of the cooperative economy in Spain, such as the thirty percent of the population who have engaged in peer-to-peer lending to non-relatives without interest.

Mason built much of his reputation on his commentary of the Greek crisis, accurately predicting acute social crisis and the election of a left-wing government there. He has longstanding relationships with local progressives and a strong personal connection to the country. “Can I just say one thing, the Greek people don’t take any bullshit,” he explains, animatedly. “The other attraction for me is that this is not a country full of people sitting there, miserable, watching the TV, getting a little pen out to mark every little Euro note that’s passed to them across the table, like you find in East Germany – totally atomised, depressed people. [The Greeks] are people who do not give a shit and can swear in every language and will fucking fight. Whether Syriza betrays them, whether anybody else betrays them, they will not give in.”

Perhaps in Greece, more than anywhere, Mason has seen the shoots of a promising new world – and the independent media ecosystem that sprang up in response to the crisis is a prime example. “Most of the valid journalistic activity in Greece right now is being done by young people who couldn’t get a job in the highly corrupt TV media, which doesn’t pay any tax, doesn’t have a licence to broadcast and is overly politically controlled by oligarchs,” he explains. “What’s really going on is the swapping of time for influence, for favours – you’re probably buying pictures and footage off each other, and so on. It’s on the edges between capitalism and cooperation. To me, this is actually more interesting in some ways than the classic linux or a co-op, it’s the way the non-economic is invading the world.”

Beyond the economic, Mason is most enthusiastic about the cultural shifts in these new ways of working. “What is the standard activity that I find people doing in one of the offices of one of those small Greek publications?” he asks. “It’s sitting on the balcony smoking. Young boys, young girls, basically having a great time talking about the world. That’s one of their main activities. I find that good. They wouldn’t be doing that if they worked for a normal company.”

But can a tech-savvy and networked grassroots leverage their new tools to overturn the power of entrenched elites and rewrite the rules of the game, as Mason imagines? “The people who make this work are your generation,” he explains. “Your generation have the tools and nativity to digital communication. They’ll do this all much better. In many ways, my generation will be seen as a transitional set of people. Of whom some got it, like me. And probably a majority didn’t get it.”

Paul Mason’s Postcapitalism: A Guide to Our Future is out now, published by Allen Lane.

Linkedin
RELATED ARTICLES
OTHER ARTICLES
A recent High Court ruling against the right to wild camp in Dartmoor National Park sparked the largest land protest in history – and campaigners say their fight is not over yet.
After blocking the Scottish government’s gender recognition reform bill, Westminster is now devising further changes to the law to make it harder for trans people to self-identify.
A new film from Berghaus traces the story of Adam Raja, who left behind a turbulent upbringing to discover the healing power of climbing.
A new exhibitions brings together the work of photographers who documented the deep unrest of these pivotal decades.
AI companies that develop image-generators using copyrighted artwork from the internet are coming under fire from artists who say that it amounts to theft.
Photographer Sean Maung reflects on documenting a small town in Pennsylvania afflicted by high levels of unemployment, poverty, violence, crime, and addiction.