Art & Culture / Print / Chimamanda Ngozi Adichie, the voice on Beyoncé’s ‘Flawless’, on the narratives of Africa 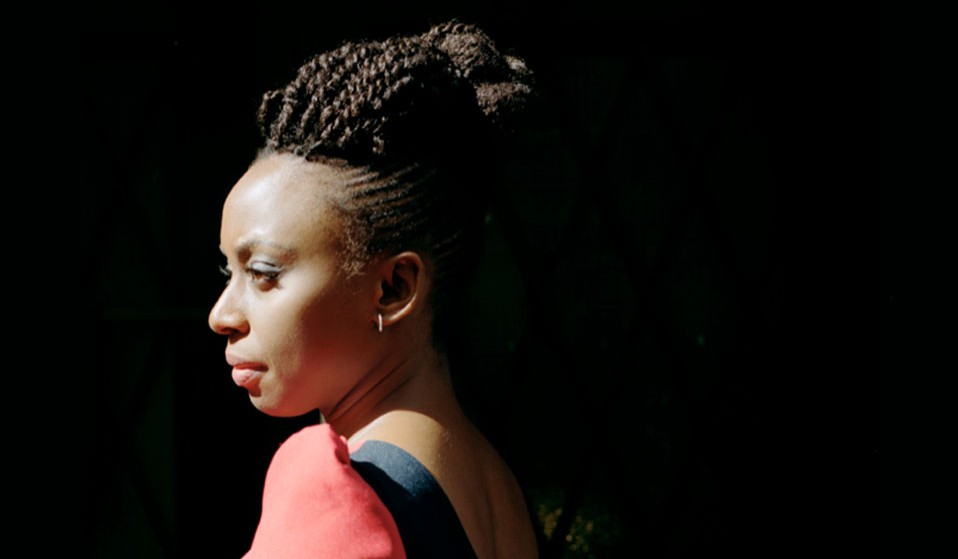 We caught up with novelist and activist Chimamanda Ngozi Adichie in London earlier this year as her seminal novel Half of a Yellow Sun sprang to life on the big screen.

We caught up with novelist and activist Chimamanda Ngozi Adichie in London earlier this year as her seminal novel Half of a Yellow Sun sprang to life on the big screen.

When Chimamanda Ngozi Adichie was a little girl, she couldn’t find herself in the storybooks she loved. The girls and boys of far-off lands – frolicking through bucolic countryside like yellow-haired sprites – didn’t look or sound like her or her friends. They didn’t come from Nigeria or represent her world. There were ‘African’ kids elsewhere, alright, captured on newsreels in voiceless stills, eyes glazed over and fighting off flies. But there were no little girls with professor dads and administrator mums – growing up in University towns like Nsukka, which unlike the hopeless shantytown scenes were bustling hubs of radical thinking – harbouring an ambition to write stories of her own.

“Money, access, power,” says Chimamanda. “That’s what stops authentic stories getting out. Access is concentrated in so few hands and those hands aren’t exactly the brightest peas in the pod.”

Chimamanda speaks with the slow determination of a woman who knows herself but is still willing to learn. Cupping her face, taking questions in her stride, she’s about to step into Hollywood’s glare as her seminal novel Half of a Yellow Sun – a heartfelt rendering of the Biafran War, which saw the Igbo people claiming short-lived independence as a secessionist state – gets remodelled for the big screen and shipped around the world. It may be a toned-down taster of the sensory explosion she brought to life on the page, but the message is still clear. “There’s a culture of silence in Nigeria around that period,” says Chimamanda, “but if we don’t learn from our history we risk repeating it.”

Chimamanda’s storytelling mission has even bolder ambitions than simply retelling the history of a people and a place. She’s taking on centuries of one-sided stories – poverty, chaos, pot-bellied despair – that paint every ‘African’ experience with the same brush. The danger of a single story, says Chimamanda in a rousing Ted Talk, is that it breeds misunderstanding. “To insist on only these negative stories is to flatten my experience,” she says. “The consequence of the single story is this: It robs people of dignity. It makes our recognition of our equal humanity difficult. It emphasises how we are different rather than how we are similar.”

In a bid to better understand the ties that bind, Chimamanda spent years researching her own history – sifting through dry academic accounts of a war that claimed her grandfather’s life. But it was only when she re-imagined the narrative, and zoned in on the details of daily life, that she found her way past the facts and figures and caught a glimpse of suffering’s human form. “I wanted to know, ‘How did people feel? What did you eat, what did you pack, what did you have to leave behind?’” she says. “It’s one thing in the history books to just say, ‘A town fell in August of 1967.’ But in that single sentence there is heartbreak, there’s pain, there’s fear – there’s hope, even. Storytelling matters and is such an essential part of our being human because it humanises events.”

By embracing her cultural voice, writing herself into a history she could see, taste, and hear, Chimamanda tapped into something universal. The story she retrieved wasn’t of her people, but of struggles for freedom everywhere. “When I went to Sri Lanka I was struck by how many people connected with Half of a Yellow Sun. I never owned the story – it was 1967, it was Biafra, but for them it was Sri Lanka five years ago. I always start with the assumption that there is a common humanity. People are different in that our cultures are different, but there are things that are constant – the idea that human beings inherently need dignity, need a sense of love in a wide way.”

As the story of Biafra makes its way to new audiences, and Nigeria’s textured history unravels on screen, Chimamanda’s mission to deliver multi-layered narratives is being catapulted even further by the power of pop. Thanks to Beyoncé, who samples a talk she gave on gender in new song ‘Flawless’ – “’We teach girls to shrink themselves. To make themselves smaller. We say to girls, ‘You can have ambition, But not too much.’” – young girls may finally have something to aspire to in the culture they consume. “It’s easy to drift along and not think about things, not ask why things are as they are,” says Chimamanda. “It’s especially easy to drift along in pop culture. But when pop culture also causes one to stop and think, that’s a wonderful thing.”

As for her own awakening, Chimamanda credits Nigerian novelist and godfather of African literature Chinua Achebe – who once lived in her childhood home and was renowned for delivering post-colonial critiques in stirring parables like ‘Until the lions have their own historians, the history of the hunt will always glorify the hunter’ – for opening her eyes to a new world of possibility, where characters in books not only chased the same future, but sounded and acted just like her. “I realised that people like me, girls with skin the colour of chocolate, whose kinky hair could not form ponytails, could also exist in literature,” says Chimamanda in her Ted Talk.

But what happens when the conversation still feels lopsided? As the news machine keeps peddling the same single stories, lenses focused solely on catastrophic views, Chimamanda has one message for frustrated voices. “Tell your own story,” she says today. “I think it’s important to point out where things are lacking but it’s even more important to try and have a solution. And it’s really important to tell stories that are very specific. The more specific one is, the more universal the story is.”

As for our cultural future, Chimamanda carries a cautious hope. “I am optimistic,” she says. “Not so much that Western media is letting new voices come through but that technology is making it possible for alternative voices to be heard. If a Western newspaper writes a stupid story about Kenya, for example, there’s a possibility of Kenyans responding online in a way that wasn’t possible before. There’s a greater sense of accountability. And hopefully it means that the stories will get better, too.”

This story first appeared in Huck 44 – The Tommy Guerrero Issue, May 2014.

Linkedin
RELATED ARTICLES
OTHER ARTICLES
Thanks to DIY education project Waves For Change the young people of Khayelitsha are getting a chance to experience the transferable skills of surfing.
African youth are building a new skate lifestyle industry on their own terms at WAFFLESNCREAM.
Considering the challenge young South Africans now face – following in the footsteps of a generation of freedom fighters.