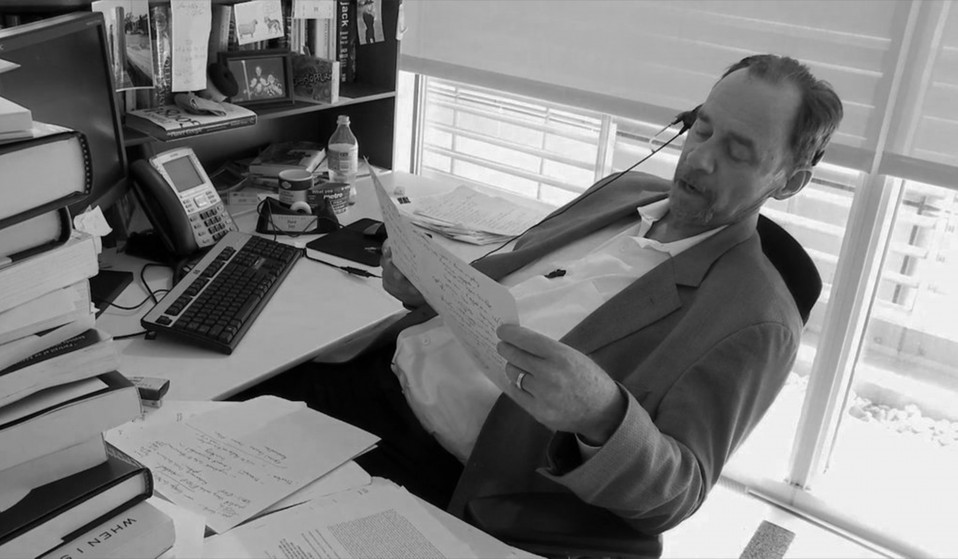 In tribute to David Carr, his most powerful lessons on journalism, hard work, honesty and more.

In tribute to David Carr, his most powerful lessons on journalism, hard work, honesty and more.

Rising from the pages of alt-weeklies to the New York Times and slaying many personal demons along the way, David Carr was a passionate advocate for the enduring value of journalism in an era when the media has been undergoing a profound transformation and crisis of confidence.

Since his death on Thursday, tributes have flooded in for a larger-than-life character who beat crack addiction to become a highly respected New York Times’ media correspondent.

He will also be remembered as a teacher and mentor for the next generation of journalists, either colleagues or students on his Press Play media studies course at Boston University – which is available online at Medium.

Here are Huck’s five things we learnt from David Carr, many of which hold true far beyond the media world.

Carr possessed an unparalleled bullshit filter. He didn’t care what university you went to, who your parents were, or how ‘gifted’ you were. His Berkeley lecture titled ‘You are what you type’ summed up his attitude that you’re only as good as what you can put down on the page. If you had an inflated idea about your own importance, Carr would brutally cut you down to size, as the founders of Vice found out when they were disparaging of the NYTime’s Africa reporting.

Carr could get away with tearing big players down to size because he was self-deprecating, humble and honest about his own life and his own failings. In particular, he wrote with a moving rawness about his experiences as a drug addict in the 1980s and his later struggle to come to terms with his former self.

“Where does a junkie’s time go? Mostly in 15-minute increments, like a bug-eyed Tarzan, swinging from hit to hit. For months on end in 1988, I sat inside a house in north Minneapolis, doing coke and listening to Tracy Chapman’s ‘Fast Car’ and finding my own pathetic resonance in the lyrics. ‘Any place is better,’ she sang. ‘Starting from zero, got nothing to lose.’ After shooting or smoking a large dose, there would be the tweaking and a vigil at the front window, pulling up the corner of the blinds to look for the squads I was always convinced were on their way. All day. All night. A frantic kind of boring. End-stage addiction is mostly about waiting for the police, or someone, to come and bury you in your shame.” – Written in the NYTimes.

2. Find People More Interesting Than You

David Carr never thought journalism should be an easy profession, but he passionately believed it was one of the most rewarding careers anyone could have. Finding interesting people to speak to is one of the most important aspects of being a journalist, and also made it a job worth fighting for.

“The dirty secret: journalism has always been horrible to get in; you always have to eat so much crap to find a place to stand. I waited tables for seven years, did writing on the side. If you’re gonna get a job that’s a little bit of a caper, that isn’t really a job, that under ideal circumstances you get to at least leave the building and leave your desktop, go out, find people more interesting than you, learn about something, come back and tell other people about it — that should be hard to get into. That should be hard to do. No wonder everybody’s lined up, trying to get into it. It beats working.” – From interview with Boston University.

3. School The Next Generation

If you care about something, then you have to care about the kids who are going to be filling your shoes when you finally leave the building for good. Many of Carr’s colleagues have praised his commitment to mentoring younger journalists and the passion and skill with which he inspired and nurtured the next generation. As Lack Professor of Media Studies at Boston University, he encouraged students to find their own voices and learn to express themselves, but most of all, do great journalism.

4. The Internet Is Both A Gift And A Curse

Carr famously took his time to be won over by the internet and long remained a critic of the distorting influence it could have on journalism. In his starring role in documentary Page One he railed against churnalism and pointed out how much of web ‘news content’ was actually just rehashing of original news gathering still being done by institutions like the NYTimes. But eventually he began to recognise the internet’s immense potential to move journalism forward into the future:

“We are entering a golden age of journalism. I do think there has been horrible frictional costs, but I think when we look back at what has happened, I look at my backpack that is sitting here, and it contains more journalistic firepower than the entire newsroom that I walked into 30 to 40 years ago. It’s connected to the cloud, I can make digital recordings of everything that I do, I can check in real time if someone is telling me the truth, I have a still camera that takes video that I can upload quickly and seamlessly.” – As told to NPR.

5. Get Out Into The World

Huck’s publisher Vince Medeiros on David Carr’s legacy and the value of going out into the real world to find out what’s going on:

“David Carr reminds us of the crucial importance of journalism. He was a romantic, always ready to stand up for his beloved – and admittedly idealised – NYTimes. He believed in the value of true shoe-leather reporting, of having reporters on the ground, getting quotes, checking facts, asking questions, finding out what the hell is going on – as opposed to sitting in an air-conditioned newsroom regurgitating stuff off the internet and, ugh, curating content – the ultimate journalistic irony in a world where mediated knowledge seems to have replaced actual real-life experience.

But he was also massively excited about the possibilities of digital – about the fact that the internet can turn us all into supercharged journalists with the ability to do text, voice, video all at once – and then share and disseminate and dialogue with our audiences.

Whatever the platform, Carr embodied the importance of factual, adversarial journalism that allows people to make sense of the world. If you believe in stuff like, say, democracy, self-determination, etc. – then this should really matter to you. Just like it mattered to Carr – who made a life out of it by reporting on the very thing that he worked so hard to preserve: journalism.”

Linkedin
RELATED ARTICLES
OTHER ARTICLES
A group of young Palestinians have found temporary freedom in the act of parkour, reimagining wreckage and ruins as a series of high-octane playgrounds.
Following the announcement of an 80% hike in the energy price cap from 1st October, crowds gathered outside the offices of energy regulator Ofgem to protest and declare their intention to undertake a payment strike.
Cindy Campbell recounts how her brother ushered in a new era of musical culture at a party she held in the Bronx in ‘70s.
A new project is documenting formerly incarcerated people as they transition back into civilian life.
As the Scottish government announces a rent freeze, an activist with Living Rent who fought and won shares how they did it, and what must come next.
Yesterday thousands gathered outside Buckingham Palace after news of the Queen’s death broke.