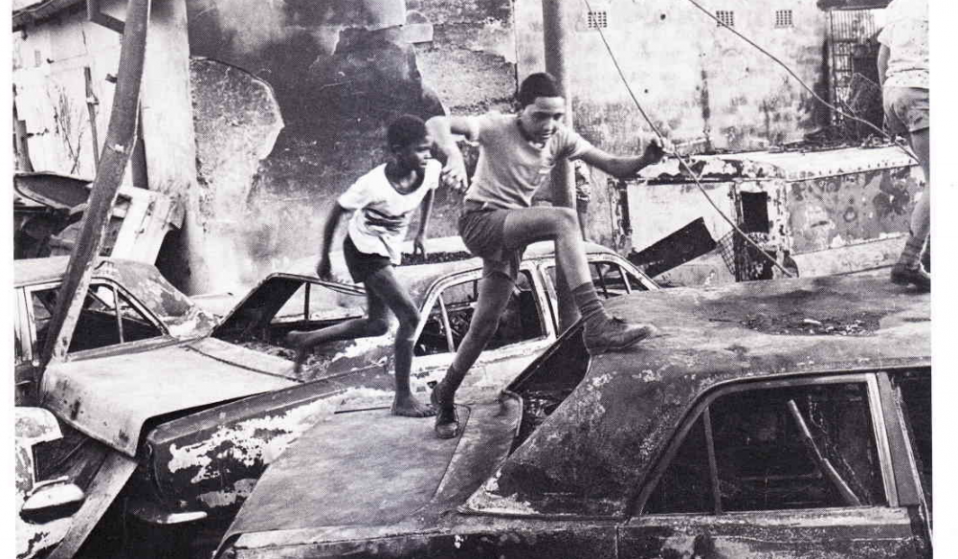 Published between 1978 and 1996, Staffrider introduced a sense of unity that was nationally outlawed. Here, the people who made it happen reflect on its significance.

Published between 1978 and 1996, Staffrider introduced a sense of unity that was nationally outlawed. Here, the people who made it happen reflect on its significance.

The first victims of totalitarian states are the artists and writers,” says Staffrider editor Andreis Oliphant. As a South African creative coming of age under the Boer regime, he is keenly aware of how instrumental censorship was in perpetuating apartheid. The Suppression of Communist Act passed in 1950 sanctioned the government to “ban” any person, publication or organisation that it felt was a potential threat to their unjust order. This incited a wave of mass banning that not only landed African National Congress leaders like Nelson Mandela in prison, but also silenced the country’s progressive writers, photographers, musicians and artists – many of whom went into exile.

This stifling repression created what Oliphant calls a “cultural desert” in South Africa, leaving decades worth of suppressed creativity in need of an outlet. Staffrider magazine became that.

The arts publication was an indirect product of the Christian Institute of Southern Africa, an organisation founded in 1963 with aims of uniting Christians against apartheid. The institute started a publishing program that planned to focus on emancipation theology – but instead, they found themselves inundated with manuscripts by writers of colour who had been silenced by the state and presented with no alternate publishing avenues.

Slowly, the Christian Institute shifted its intent to inclusivity, and developed into a fortified publishing house. But after the 1976 student uprisings, its leaders were banned and confined to their homes, leaving the race-blind publishing initiative at a standstill. In order to continue their efforts, they appointed an English literature academic named Mike Kirkwood to run it in their absence. There, Ravan Press  – an acronym of the banned leaders’ last names – was born. 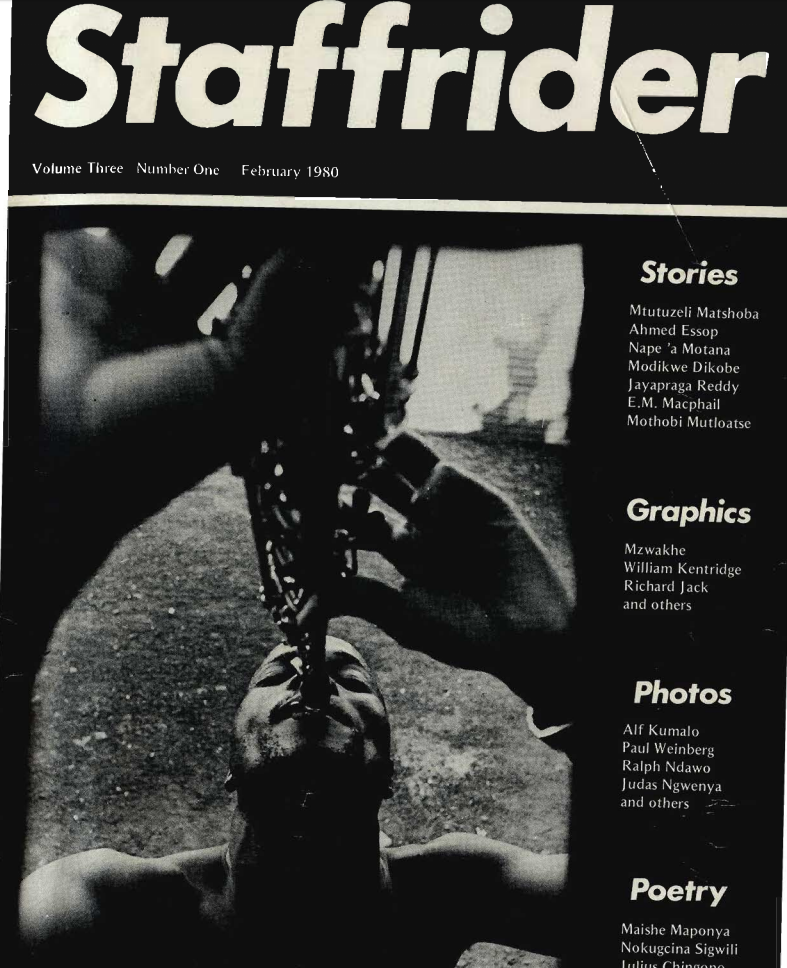 One of Kirkwood’s first intentions was to start a popular journal, which addressed the widespread writing communities popping up in townships across the country. “There was a need for an arts magazine that would serve as a platform for a new generation of community-based arts groups allied to the Black Consciousness movement, that would also include white activist artists,” says photographer and long-time Staffrider collaborator Omar Badsha. Badsha, along with Mafika Gwala and Nkathazo ka Mnyayiza of the Mpumalanga Arts Group, met with Kirkwood just before he took his new position at Ravan Press, to discuss the concept for a new, multidisciplinary publication.

The editorial policy was based on Ravan’s anti-apartheid ethos. It was non-racial, populist and chose English as its language of publication (rather than Afrikaans or other indigenous languages). Even though Kirkwood is considered the founding editor, in the early days of Staffrider, the publisher’s intervention was minimal. The real editing process was done at the community level; writers groups worked together to edit and select pieces they wanted to publish, before sending them to Ravan. The pages of Staffrider were filled with poetry, social realist fiction, popular history, graphics, fine art and documentary photography. The multitude of mediums reflected the multitude of voices legitimised and validated by the publication: first-time writers were published beside some of South Africa’s most famous, including Nobel Prize winner Nadine Gordimer, Douglas Livingstone and Rose Zwi. The levelled playing field conveyed a sense of solidarity in rebellion.

The magazine’s name came from a slang word referring to the ticket-less young men who clung to the sides of the roof of overcrowded, segregated trains that travelled between townships and city centres. It alludes to the everyday necessity of “the commute” for South African workers who were barred from living in white areas, and even more poignantly, to the rebels who refused to comply with expectation. According to Oliphant, a “Staffrider is a daredevil who defies convention, who transgresses the imposition of a particular system.” 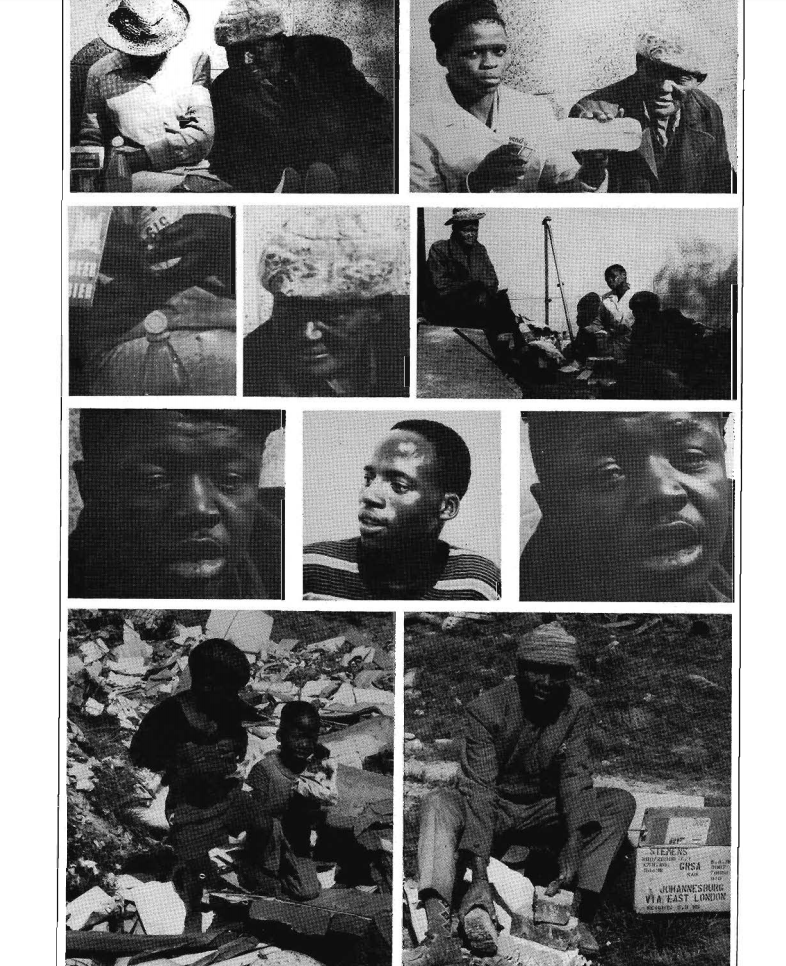 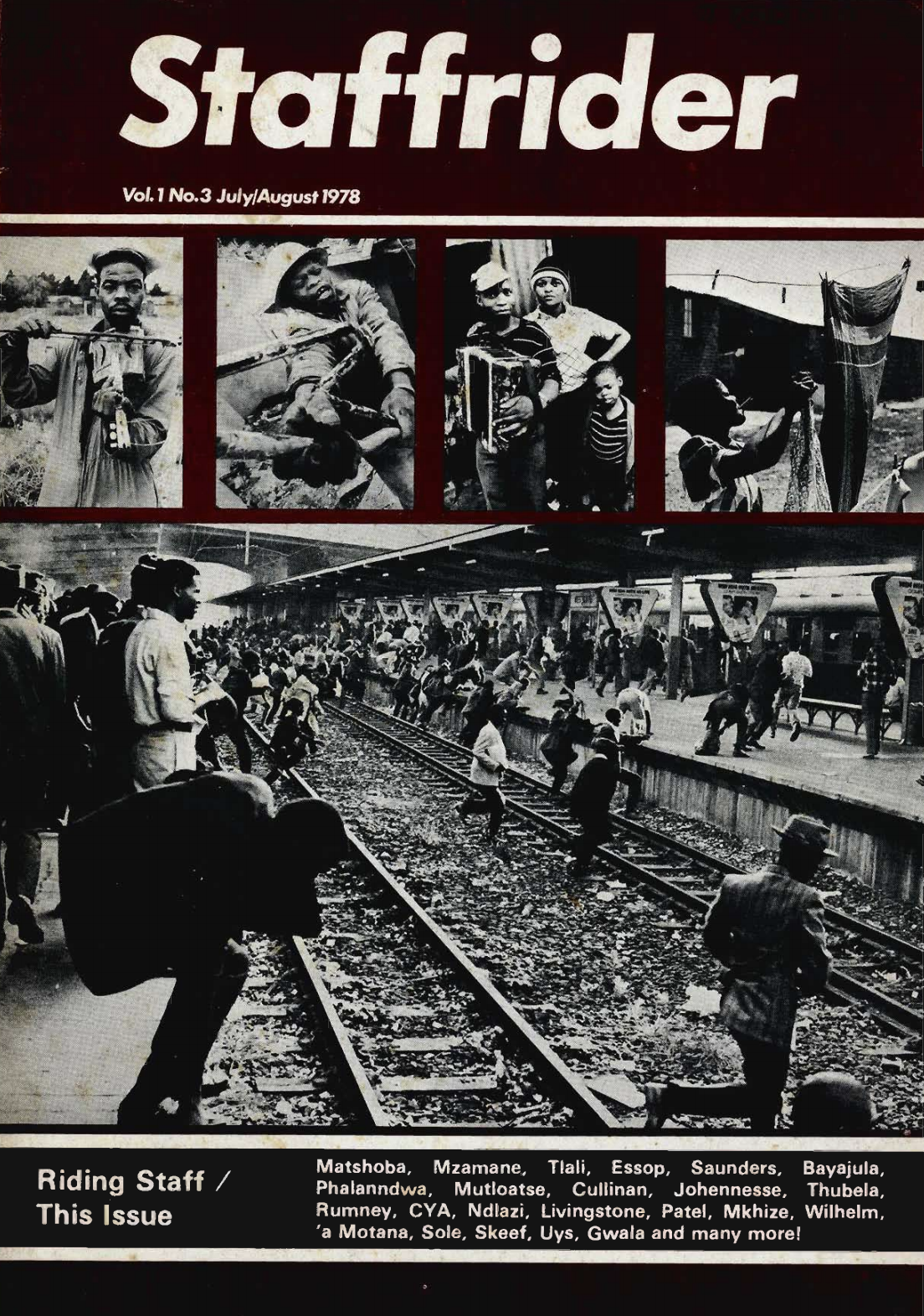 The first edition of Staffrider was published in March 1978, and it got immediately banned for distribution. The second suffered the same fate. But the magazine’s structure, which lacked formal hierarchy and attributed works largely to their groups, made it more difficult for censors to target an individual for their work. Moving forward, Staffrider editors learned to find the loopholes in the apartheid censorship system, and the following editions were allowed to circulate freely.

By 1980, the magazine’s print run was 7000, and 90 per cent of the readership was black. It ended up becoming an indispensable forum for PoC writers to share their work with the world, and challenge racial and cultural oppression when the propaganda of apartheid machinery was at its most dominant. It also received an enthusiastic response from progressive white students, who viewed it as one of the few publications in the country that allowed for an alternative (rather than state-sanctioned) viewpoint of South Africa.

The magazine’s editorial policy was subject to criticism, however, and shifted over time. “People who were into high art thought of it as a magazine of advocacy, that lacked subtlety,” explains long-time photo contributor Paul Weinberg. “They believed it was below the gold standard of where literature should be in the academic sense, because it was partisan and clearly political.” 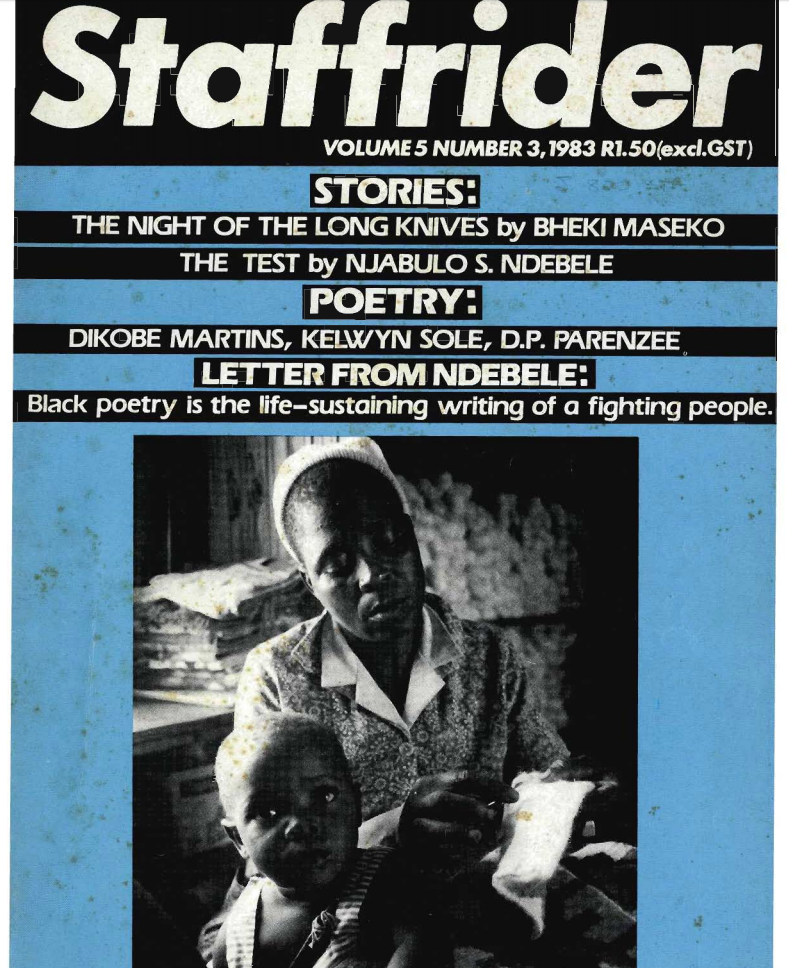 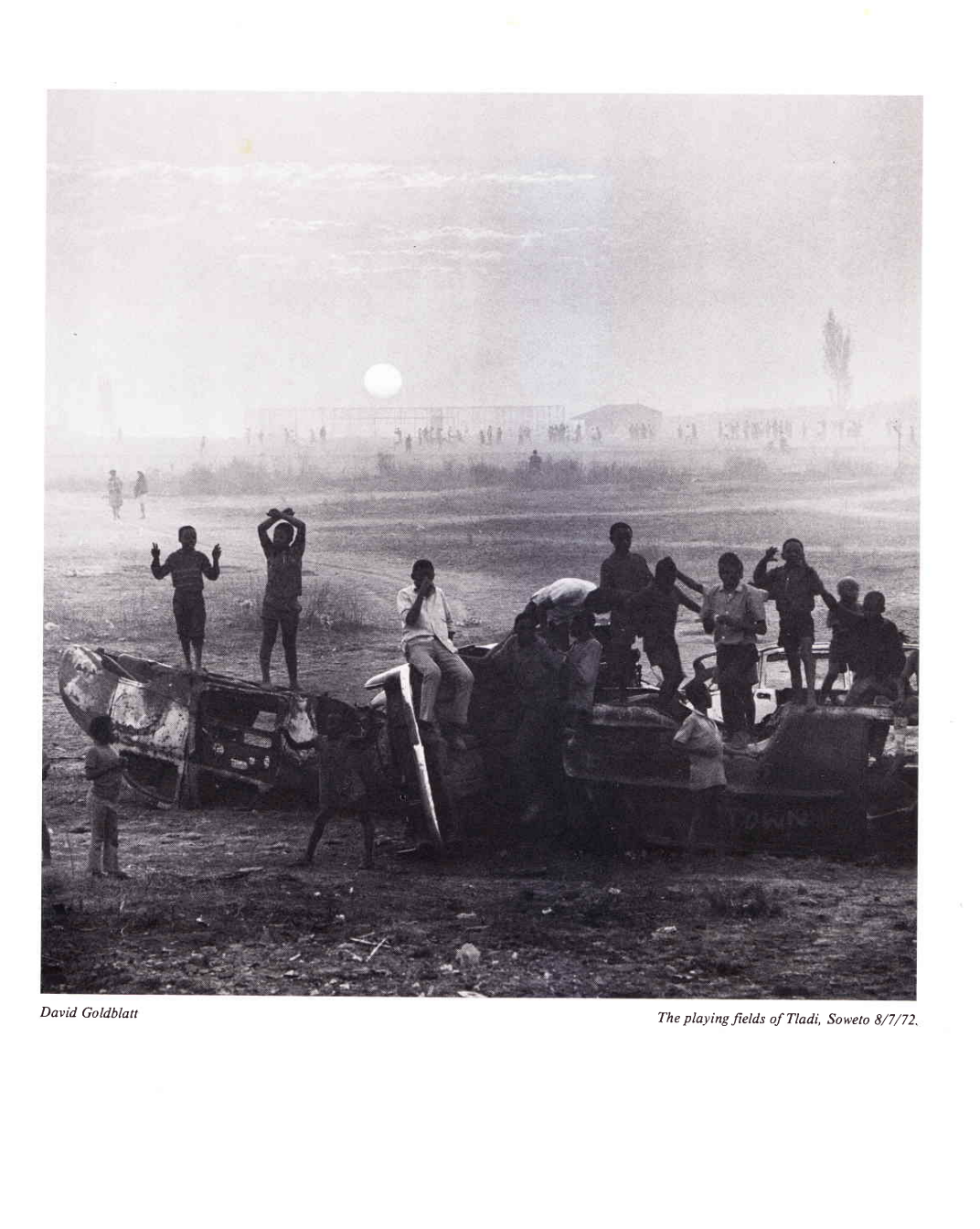 By 1980, the Staffrider team was presented with such a high volume of submissions that it had no choice but to be more selective. Mike Kirkwood later appointed Chris Van Wyk to overtake the magazine and in his time, its quality (in terms of both design and content ) was elevated. Still, Staffrider’s mission wasn’t to publish the best writing in South Africa; it was to encourage new artists to share their artwork with broader audiences.

The end of the apartheid regime in 1994 marked the end of Staffrider. The magazine was an incubation site not only for progressive artistic expression, but also for broader political activity and cultural development. “Alternative press formed part of the mass resistance movement against the apartheid regime,” says Badsha. “It provided us with a window into the role and possibilities that the arts provided in the building of a new liberated South Africa.”

Despite it being of paramount importance, the potency of Staffrider’s legacy has been lost in the landscape of a broader narrative of struggle and oppression. Perhaps because the pages of Staffrider present ideas that are still, 25 years after the end of the Apartheid regime, subversive.

“Critics claim that artistic resistance is ineffective,” adds Oliphant. “But to those same people I ask, why do authoritarian states consistently go after artists and writers? They are silenced, killed, jailed and exiled, because artists articulate the experiences and conditions of their communities, of various classes, genders and races. It’s because they mobilise people.”

Read all of the Staffrider back catalogue on Digital Innovation South Africa.

Linkedin
RELATED ARTICLES
OTHER ARTICLES
The two-day long event returned to London this year, showcasing a spectacular parade, steel bands and Caribbean food.
Rogue landlords are exploiting young and inexperienced renters and leaving them in mental and financial turmoil, reports Niall Hignett.
Birdy Chu reflects on documenting the historic moment in which the territory was formally passed back from the UK to China.
A group of young Palestinians have found temporary freedom in the act of parkour, reimagining wreckage and ruins as a series of high-octane playgrounds.
With skyrocketing rents, packed out viewings, bidding wars and more, renting in London has never been harder.
The idea that a younger generation is abandoning work has become a popular narrative online, but it doesn’t necessarily reflect reality.