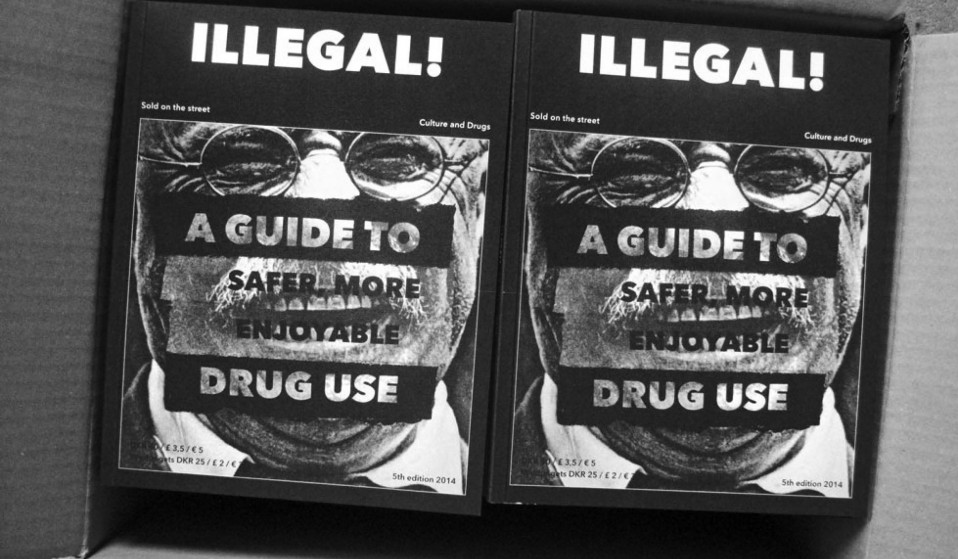 For four years, Illegal magazine has been speaking honestly about drugs, providing a source of income for addicts in the process. Now the publication is hitting the streets of London.

For four years, Illegal magazine has been speaking honestly about drugs in Denmark, providing a source of income for addicts in the process while not passing judgement. Now the publication is hitting the streets of London.

Despite pretty much all the evidence telling us that our drug laws are broken, we continue to criminalise substance use in the United Kingdom. While there are many complex outcomes of this approach, one of the consequences is simple: we just don’t talk about drugs. By keeping it a taboo subject any conversations that do take place are simplistic, seeing users in rigid and unhelpful right/wrong terms, shrouded in judgement and stigma.

Illegal magazine is on a mission to spearhead a more honest and open approach to drugs, with the hope of progressing a move towards decriminalisation. Illegal isn’t only unique for its subject matter; the money made from every issue will stay in the hands of the drug users who sell it, even if that means funding their habit. It’s a reality that founder and Editor-In-Chief Michael Lodberg Olsen is upfront and unapologetic about.

Launched in Denmark in 2013, the scheme kicked off in Denmark, but now the magazine can be picked up on the streets of London too.

The rationale behind the model, according to Lodberg Olsen, is that selling Illegal offers addicts an alternative, legal source of income that’s safer and less harmful than theft or sex work, which so often where money comes from. It’s a controversial idea; helping someone take part in an illegal activity isn’t something everyone feels comfortable with, even if it could reduce crime rates in the process.

Lodberg Olsen, a social entrepreneur with 20+ years experience working with drug users, says the magazine’s reception in Denmark has been positive overall. “In general, the authorities don’t interfere that much. I think in the beginning they hoped it would only last for a couple of months,” he laughs.

“Everybody who gets the magazine in their hand really likes it. They like to meet another way of dealing with drugs, an honest way where we talk about the good and bad, especially young people.” Currently, Illegal is published four times a year in Denmark and sells between 1,500 and 2,000 copies on average every month.

Louis Jensen, who now edits the magazine’s UK edition, met Lodberg Olsen a few years ago while working on a project. He felt that the UK needed its own version of publication. Jensen too believes that drugs should be treated as a health and safety issue rather than a criminal justice issue, and got to work putting the British version together.

“People should say ‘If you are going to take cocaine or smoke weed, this is how you should take cocaine and smoke weed in a safe environment’. Don’t just say ’Don’t do it’ because that’s the worst thing to tell a teenager,” he explains, comparing the approach to sex education. 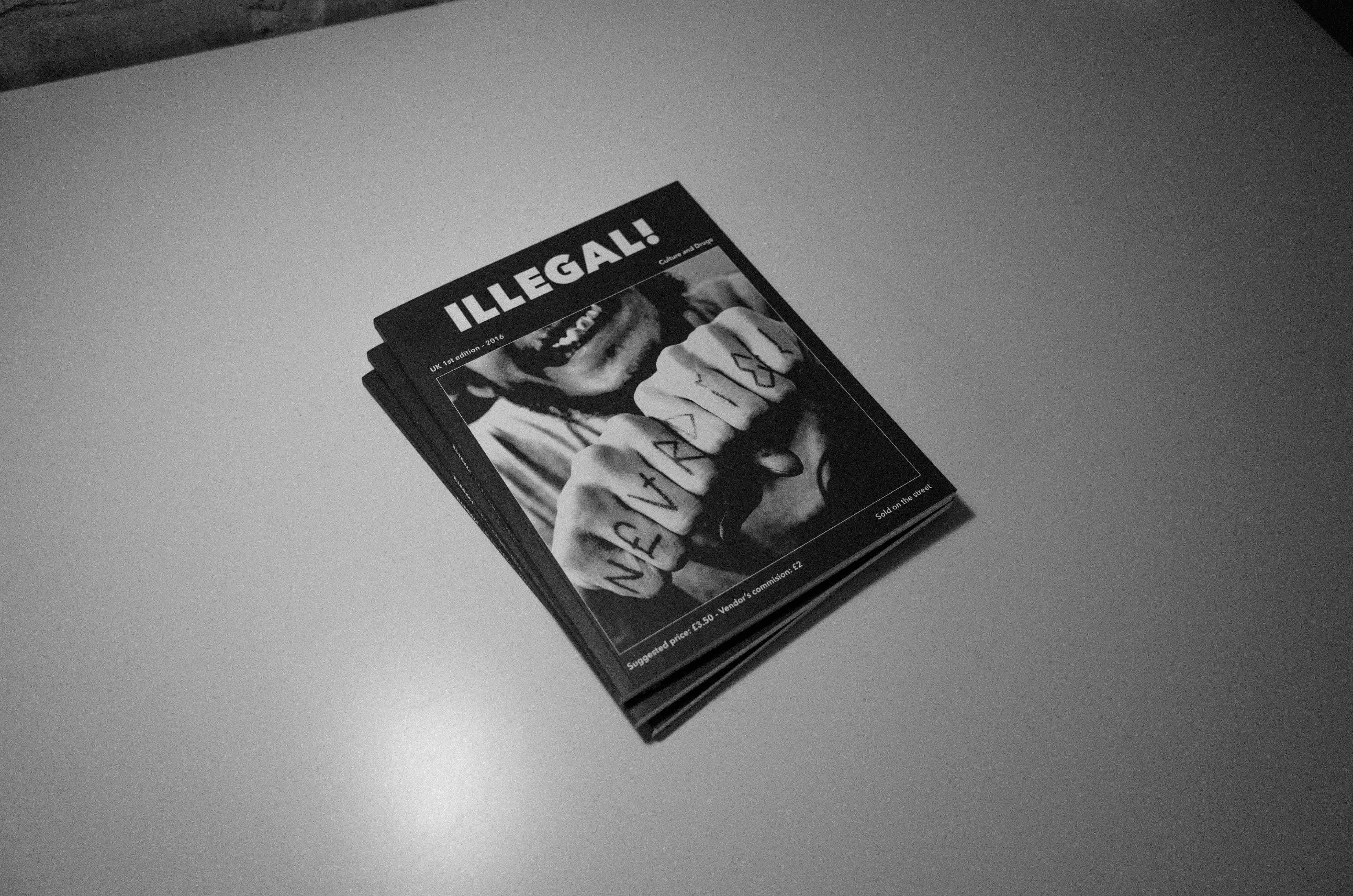 Regardless of any reservations about where the profits might go, both editors are committed to complete honesty and transparency around how the model works.

Flick through Issue #1 of the UK edition and you’ll a range of topics covered in articles, from the growth of weed brands and random drug facts to a profile of cannabis activist Lee Harris, with personal accounts from addicts and users too.

Illegal’s editorial content feels far from preachy or condescending, it certainly doesn’t scream ‘let’s all get off our faces!’ to a reader. The magazine’s aim has always been to address the topic in the most unbiased way possible without explicitly condoning drug use. “Prevention work is about scaring people, not educating them. That’s very dangerous because then we don’t have any dialogue with the people using drugs, so it’s more difficult to help them if they take too much,” Lodberg Olsen warns.

One question that springs to mind is, why doesn’t Illegal focus on helping drug users to curb their habit instead of funding it? Jensen asserts that vendors have complete autonomy over themselves. “Most of the people who sell the Big Issue are more than likely going to spend the money on drugs, and I also mean alcohol and cigarettes, not just illegal drugs. Regardless of what our vendors are going to spend the money on, they’re in charge of their own body and what they do with it is their own wish.”

For Lodberg Olsen, seeing addicts repeatedly resort to theft to feed their habit reflects the ineffectiveness of Denmark’s drug policy, and consequently, the need for Illegal magazine. “We have to try to do something else. It’s easier to get addicted drug users to rehab if the person is alive and not dead. Denmark has one of the highest death rates among drug users in the EU, so right now it’s about giving the most addicted drug users a more normal life,” he says.

With ten issues published in Denmark to date, Illegal magazine may be making its way further across the globe. The upcoming eleventh issue will be tested out in San Francisco and Los Angeles, written in English instead of Danish.

In addition, Lodberg Olsen recently expanded his magazine portfolio and published the first issue of Strada, Denmark’s new cultural magazine about minorities. In future, he intends to develop Illegal into a rehab program for addicts.

“I think it’s a global movement, that’s why I’m very happy to bring Illegal to London. It’s an important global conversation that we have to change and it takes time.”

Linkedin
RELATED ARTICLES
OTHER ARTICLES
Taking us through one of the most dynamic years in recent history, Laylah Amatullah Barrayn new photo book contains tender yet confrontational portraits.
A new film from Berghaus traces the story of Adam Raja, who left behind a turbulent upbringing to discover the healing power of climbing.
David 'Dee' Delgado’s photo project is about honouring and uplifting the city of his youth, and a world rapidly disappearing under the relentless onslaught of gentrification.
Campaigners reflect on what the supreme court’s decision to allow buffer zones in NI means for the future of reproductive rights in the UK.
The first-generation graffiti artist reflects on the tagging’s emergence as an art form and the players who pushed the medium forward.
From snake handlers to mardi-gras revellers, Tom “TBow” Bowden’s photos provide a snapshot of the wonderful and weird people who make up America.