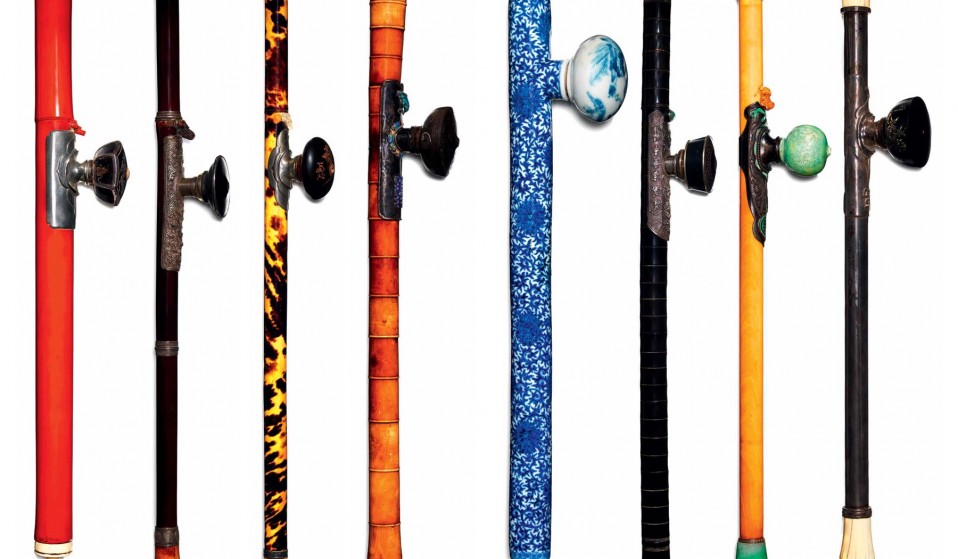 A compulsive collector since the 1970s, Julio Mario Santo Domingo has accrued nearly three house’s worth of literature, knick-knacks and paraphernalia – covering everything from cocaine to opium to weed, black magick to beat poetry, erotica to romanticism.

A compulsive collector since the 1970s, Julio Mario Santo Domingo has accrued nearly three house’s worth of literature, knick-knacks and paraphernalia – covering everything from cocaine to opium, black magick to beat poetry, erotica to romanticism.

One of the first objects that Peter Watts writes about in his new book, Altered States: The Library of Julio Santo Domingo, is an embalmed grapefruit. Keith Richards had used it instead of wrapping paper when he gave Ronnie Wood a ring for his birthday, on tour in Munich in 1990. He stuffed the ring inside the grapefruit and wrote “Happy Birthday Ron” on the skin in black marker. Wood picked out the gift and discarded the grapefruit in his hotel room’s trash can, as anyone might.

But Julio Santo Domingo, a friend of the band, needed that grapefruit. It was a piece of history. It needed to be preserved. He stole the trash can, took the grapefruit back with him to his home in Geneva, stuck it in his fridge, and then set about trying to find someone who would mummify it for him. Eventually, the job fell to a taxidermist in Austria. “Julio loved it,” Watts writes. “To him, something shed from the trash was as important as a first-edition Thomas De Quincey.”

Santo Domingo was a compulsive collector of drug-related literature, paraphernalia, and ephemera. Born into money in 1958, the son of a wealthy Colombian magnate, he didn’t care much for the boardroom as a kid. He lionised the beat poets and their European predecessors, hallucinogen-inspired libertines and dropouts. He moved to New York in the late ‘70s and studied at Columbia University. By the early ‘80s, when Santo Domingo was still in his early 20s, the compulsion to collect had set in. He’d keep hold of things that anyone else might discard, all for posterity. He was, as his wife Vera tells Watts in Altered States, “keeping his whole life in time capsules.” 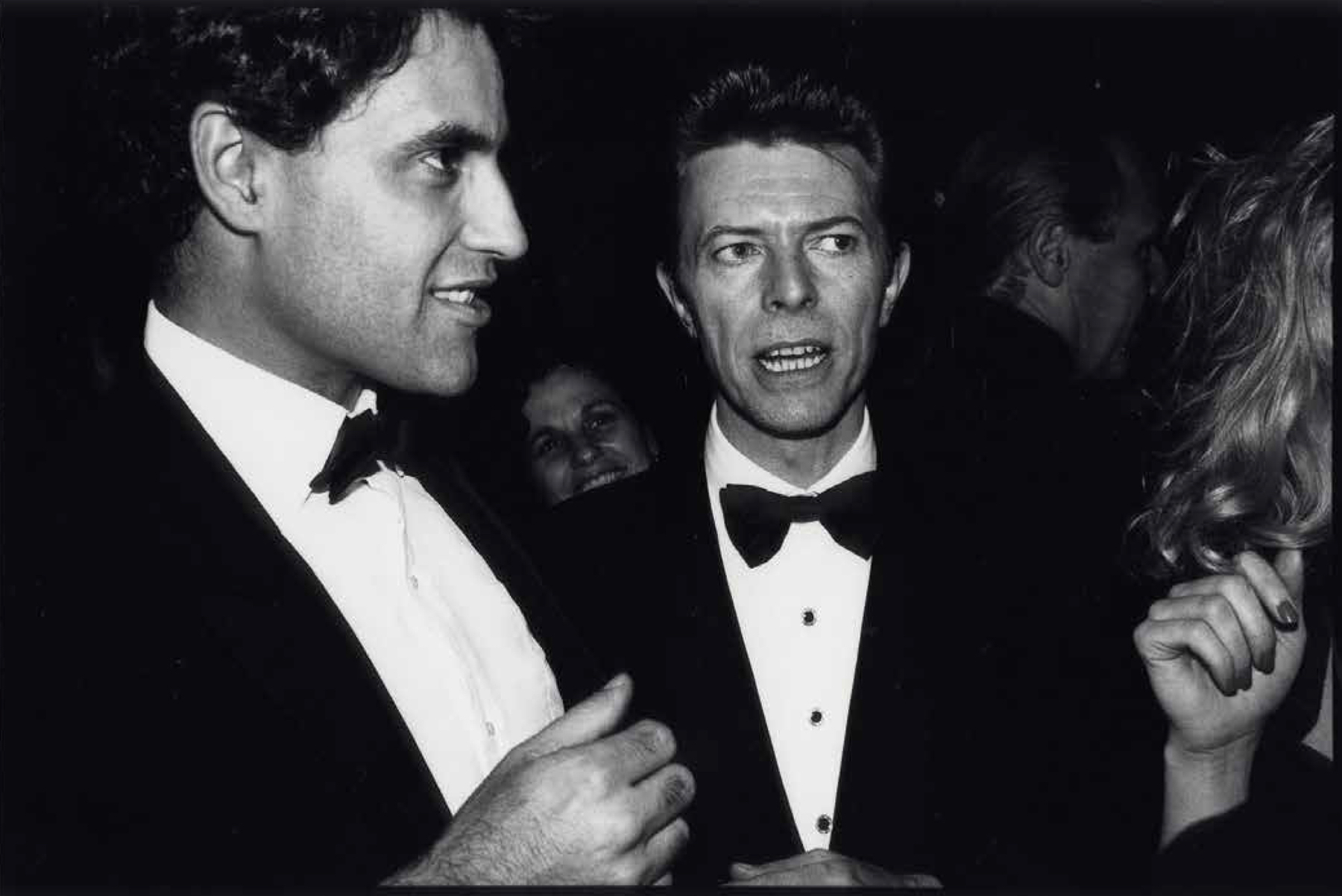 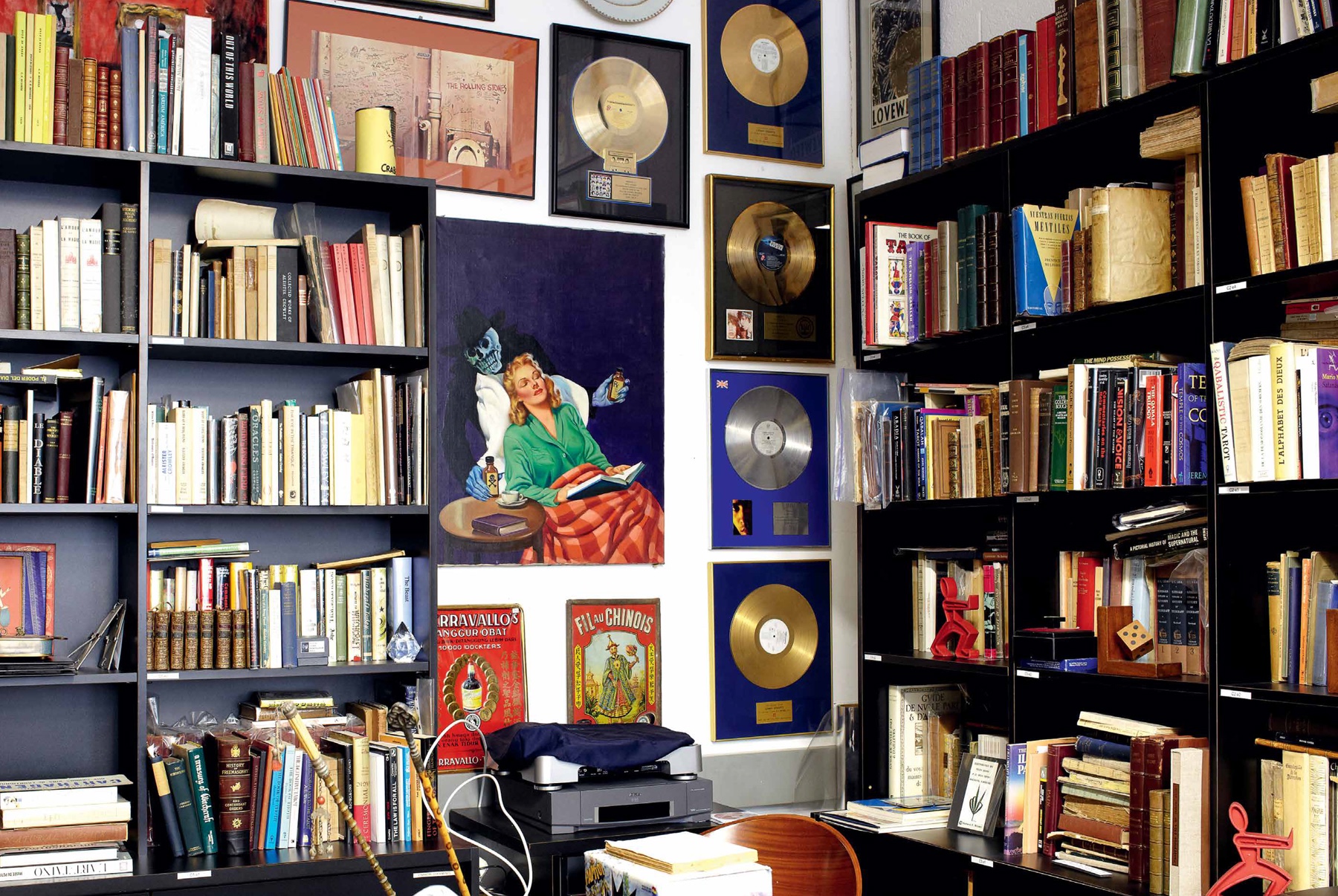 His collection soon took serious shape. He first obsessed over the Rolling Stones. (His godfather, Ahmet Ertegun, was the head of Atlantic Records, so access wasn’t a problem). He did everything in his power to get hold of rare Stones items, the type of things that the average obsessive wouldn’t even think of, all the way down to that grapefruit.

But the Stones were just the gateway. They were, Watts writes, “a natural fit for Julio, living the sex, drugs, and rock ’n’ roll lifestyle, hanging out with Allen Ginsberg and William Burroughs, working with Andy Warhol and referencing the likes of Charles Baudelaire and Aleister Crowley.” In the late 90s, when Vera suggested that he find a more serious focus for his impulse to accumulate, he immediately decided to focus on drugs.

The sprawling collection that Watts details in Altered States – subject by subject, piece by piece, over almost 500 beautifully designed pages – moved to Harvard University in 2012, three years after Santo Domingo’s death. But the bulk of the LSD Library, as the collector christened it, was originally homed in the Swiss town of Thônex. It covers everything from cocaine to opium to weed, black magick to beat poetry, erotica to romanticism. Anything that might have alluded to drugs and their effects, even briefly, was there in Geneva. An old copy of National Geographic, for example, sat in the corner, “because of one paragraph of one story that references the “dream fish” (Kyphosus fuscus), a psychotropic/hallucinogenic fish found in the waters off Norfolk Island in the Pacific, which is said to give people strange dreams after they have eaten it.” 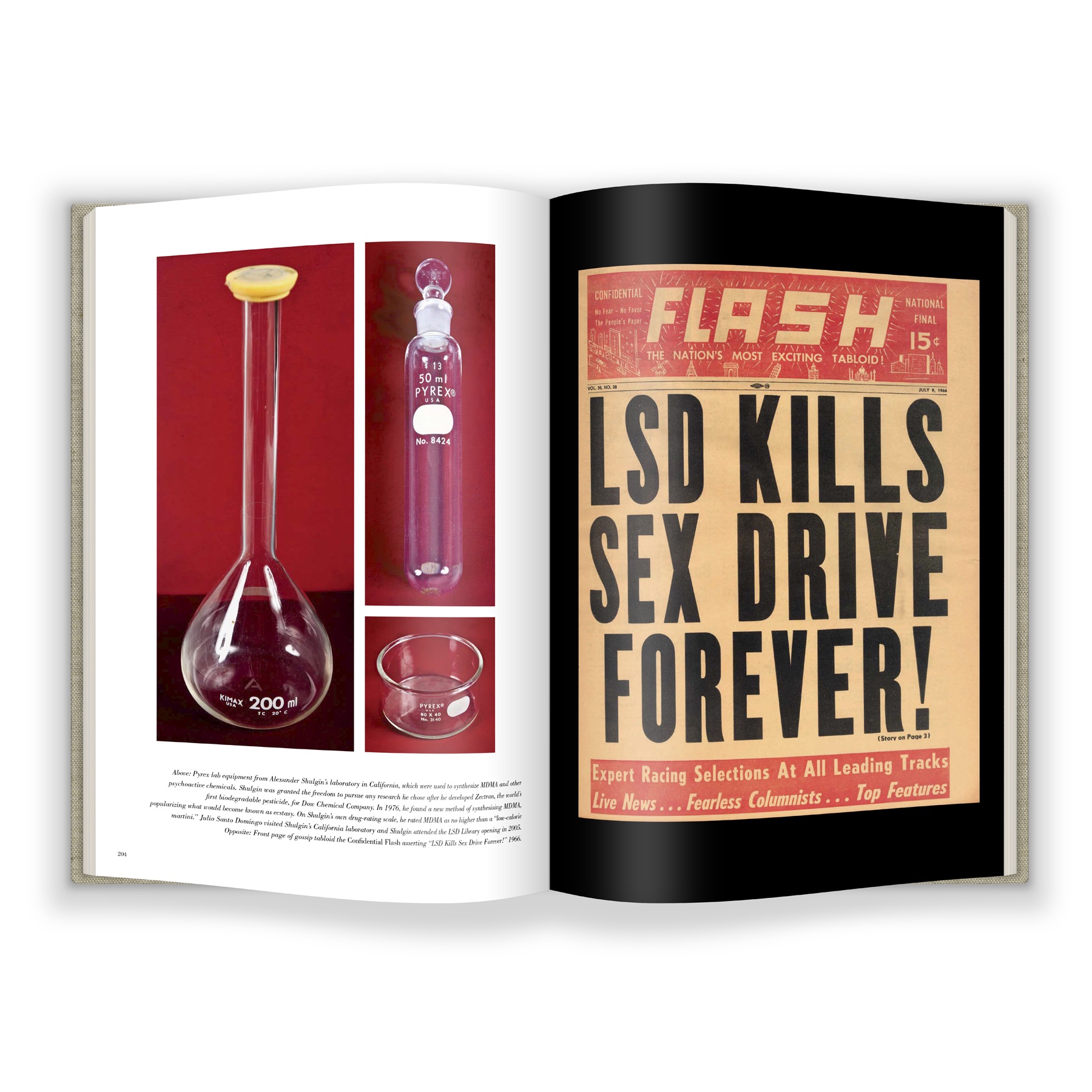 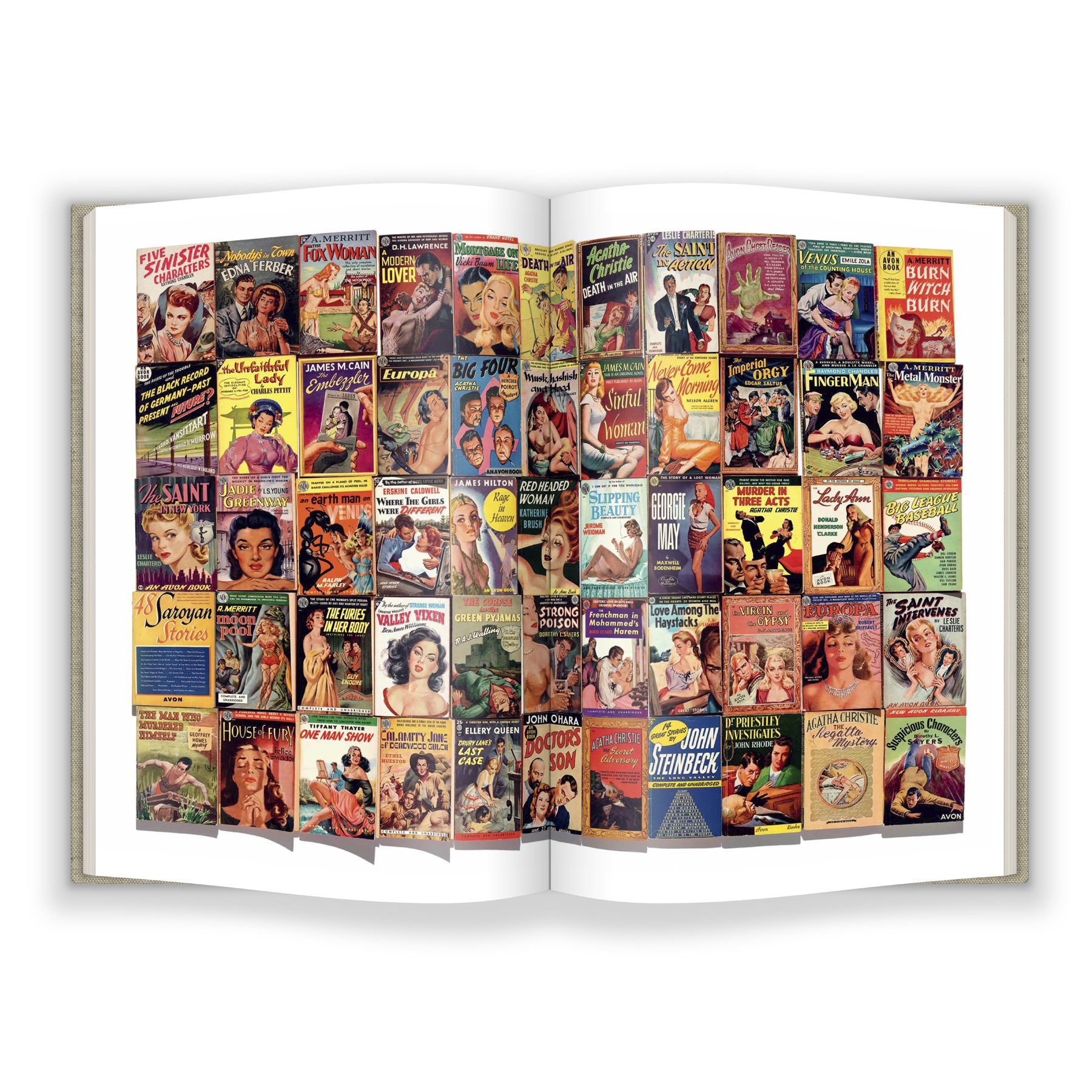 The collection, Watts says over the phone from his home in London, “took over three huge rooms, each the size of a terraced house,” he says. “There were things that just didn’t make sense. It wasn’t just lots of books. There were medicine bottles, there were posters, and there were plastic marijuana leaves and some things that you’d consider really tacky. The sort of things they’d sell in Camden market, alongside a book by Baudelaire.”

In Altered States, Watts writes about how difficult it was to figure out a connection between seemingly random objects: “You would find everything from the sublime – a handwritten note by Thomas De Quincey complaining of an opium-related illness – to the ridiculous: a doll of Dopey, the stoned dwarf from Snow White.”

He doesn’t dwell on it in the book, but that Dopey doll was the key that unlocked Julio’s strange process. He found it in the second of those three huge rooms. “And it just suddenly made sense, the humour behind it. I’d never really thought of Dopey the Dwarf as being stoned, but in that context, yes, of course he was stoned. I had to think like Julio as much as I could, which is quite abstract. It’s not just obviously drug things. It’s everything that may have been vaguely touched by drugs or altered states.” 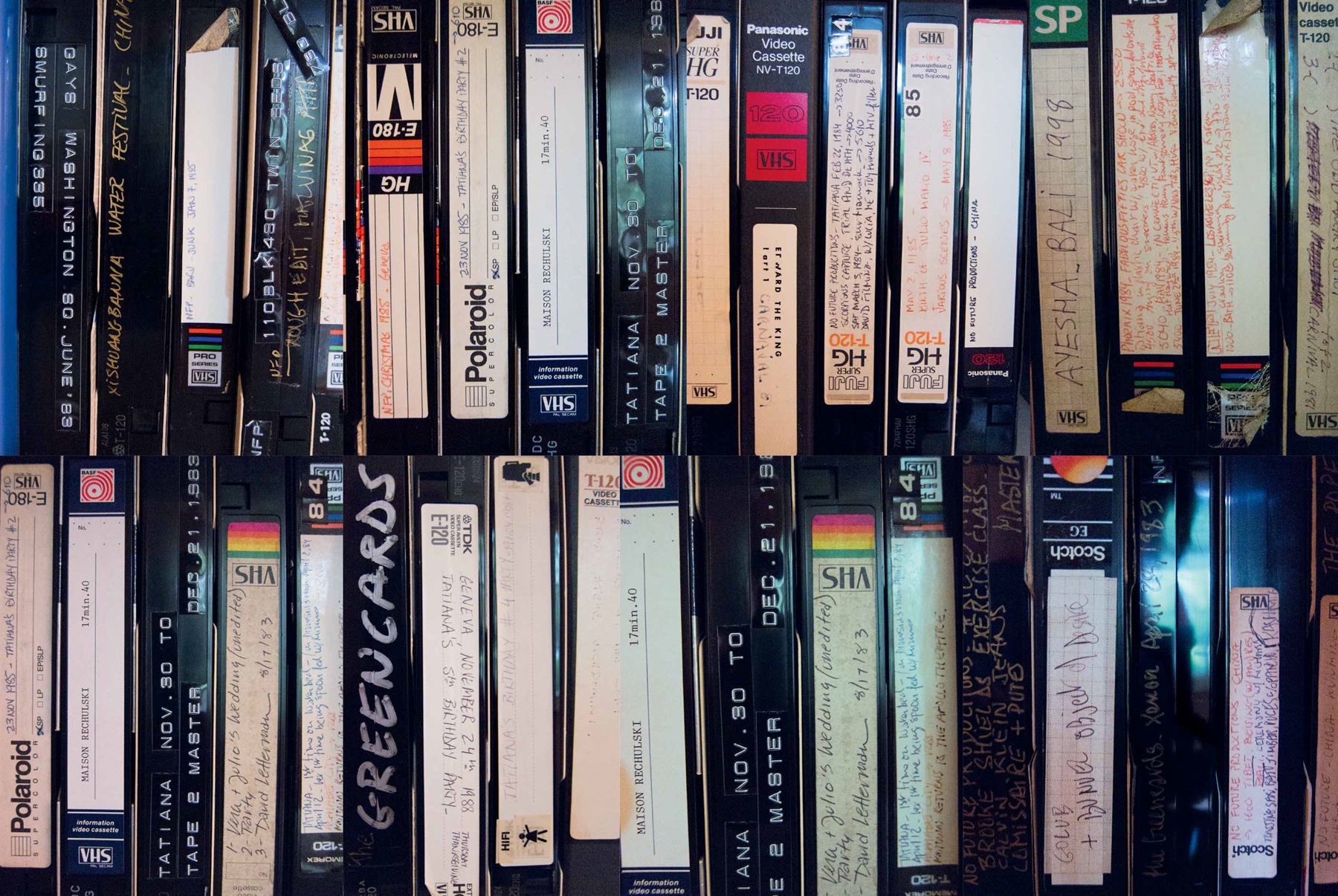 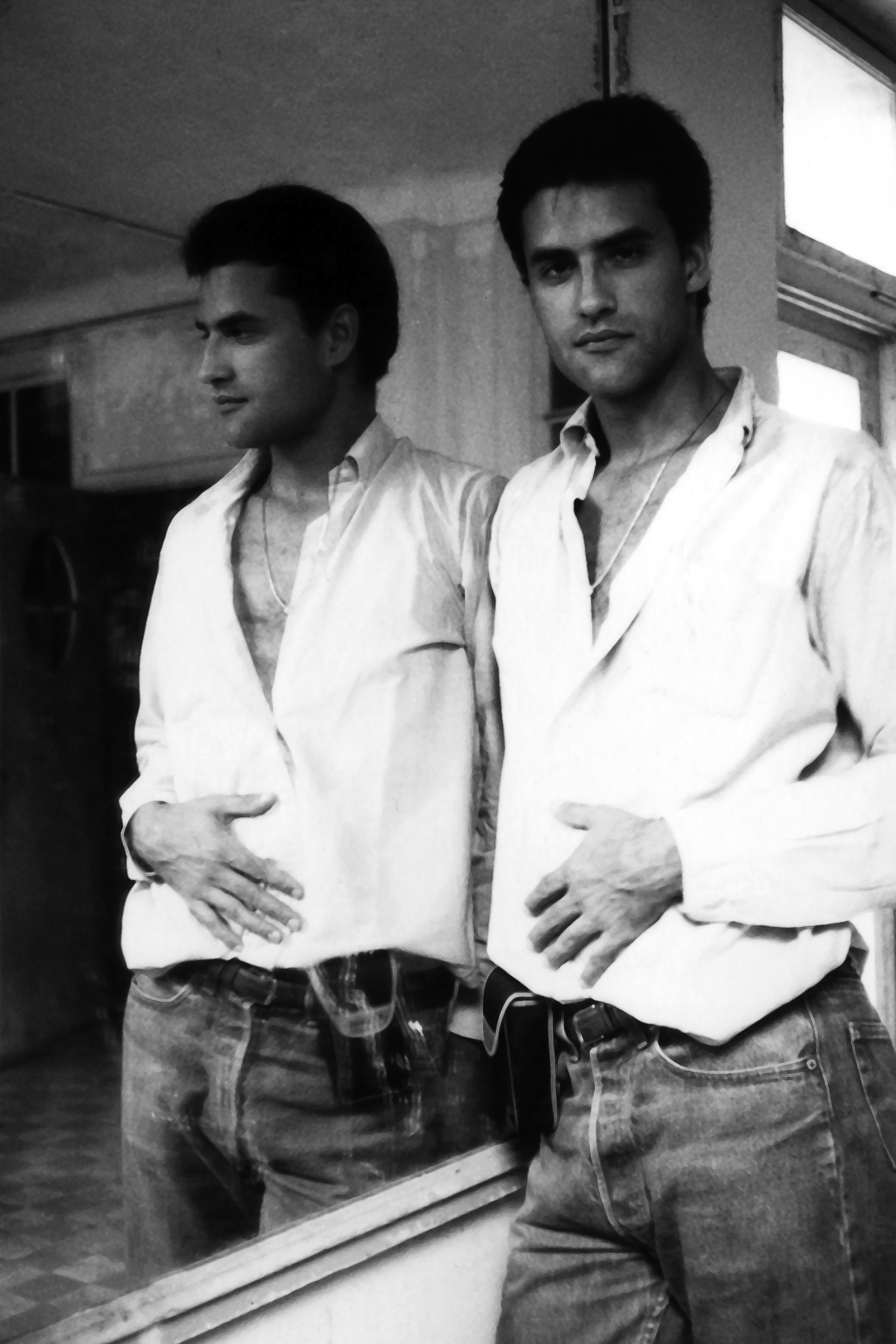 So Watts finds coherence in the chaos by treating each object as Santo Domingo did. He’s fascinated by a first edition of Jack Kerouac’s On the Road, signed by Burroughs, Ginsberg, and Herbert Huncke. But he devotes just as much space to a cheap, plastic MacDonald’s coffee spoon from 1980. The company had redesigned it that year, filling in the head to discourage people from using it as a coke spoon. It is, Watts writes, a “fascinating piece of ephemera, which says a considerable amount about drug- use politics and economics of the era. It is difficult to imagine that any other collector would conceive including it in their collection.”

Watts insists that there aren’t many obvious parallels between Santo Domingo’s compulsion and the author’s obsessive tendencies. “If I’m speaking personally, I’m quite tidy,” he says. But after immersing himself in Santo Domingo’s world, he understands the collector’s urge. In the introduction to Altered States, he quotes Phillipp Blom: “the most important object in any collection is always the next one.”

“That really was a brilliant distillation of that kind of compulsive collecting behaviour,” Watts says. “You’re never going to be satisfied. You’re always going to want the next one, because that’s the joy of it.”

Altered States: The Library of Julio Santo Domingo will be released by Anthology Editions on December 5.

Linkedin
RELATED ARTICLES
OTHER ARTICLES
Since 2007, Gideon Mendel has made 20 trips to document floods in 13 countries. The result is an alarming record of what has already been lost to the climate emergency.
A new film from Berghaus traces the story of Adam Raja, who left behind a turbulent upbringing to discover the healing power of climbing.
Photographer Becky Tyrell went down to the fading banger and stock raceway to meet a community desperate to keep it alive.
After building his reputation covering the US civil rights movement in the 1960s, the photographer went on to produce some of the most enduring images of the past century.
A recent High Court ruling against the right to wild camp in Dartmoor National Park sparked the largest land protest in history – and campaigners say their fight is not over yet.
Activists and campaigners are fighting back against new laws that would seriously undermine the ability to take industrial action, calling it an attack on fundamental workers' rights.