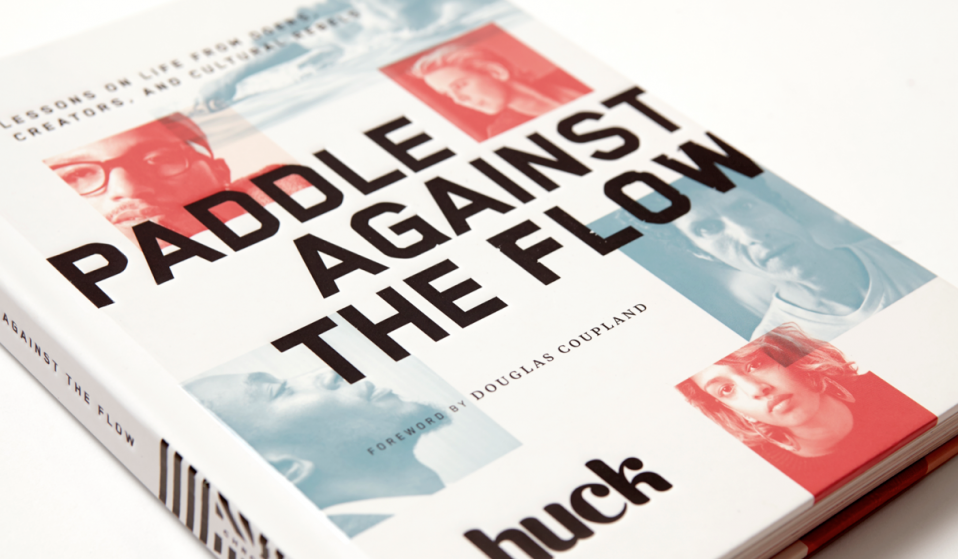 Inspiring indie icons – from Douglas Coupland and Spike Jonze to Miranda July and Kim Gordon – give us advice on how to live a creative life.

Inspiring indie icons – from Douglas Coupland and Spike Jonze to Miranda July and Kim Gordon – give us advice on how to live a creative life.

We are beyond excited to announce the imminent release of our first book, Paddle Against the Flow , a compendium of some of the best things ever said in the magazine.

For nearly a decade, Huck (is it weird to talk about ourselves in the third person?) has roamed the globe documenting counterculture as it unfolds, seeking out freethinkers. Now, we’ve collated all those insights into Paddle Against The Flow, a sort of how-to guide for a creative life from influential indie stars. Nas on language, Cat Power on looking inward, Spike Jonze on loving what you do, and Kim Gordon on feeling the flow. They are just some of the 60 doers and creators who share a diverse range of truths, creative wisdom, and life lessons in our new book.

Paddle is for a generation who — faced with harsh economic realities — make things happen by studying craftsmanship on YouTube, raising funding on Kickstarter or finding ways to create and collaborate from the bottom up. Paddle is for Generation DIY. That’s you guys, fyi.

“This book is dedicated to the millions out there who have thrown out the rulebook, defied authority, and challenged “the way things are” to dream and to try and make something different. The Huck Finns, Mos Defs, Spike Jonzes, Kim Gordons, Patti Smiths, Thoreaus, Zapatas, and Snowdens of the world. Everyone, really, who looked at the structure – restrictive, oppressive and full of shit – and thought, “Fuck this,” and instead chose to make it happen for themselves, refusing to be civilised while carving their own path to expression – and, ultimately, to freedom.

Have you ever paddled against the flow?

Paddle Against the Flow is released on March 3 via Chronicle Books and is available from a bunch of places including the Huck Shop, Amazon, Urban Outfitters, Chapters Indigo, Hardie Grant, and Hugendubel.

Join us for the Paddle Against the Flow launch party at Huck’s 71a Gallery, Leonard Street, London EC2A 4QS, on Thursday March 19, 6-9 pm. RSVP here.

Linkedin
RELATED ARTICLES
OTHER ARTICLES
This year Huck is going in search of a manifesto for indie culture - a crowdsourced how-to guide where everyone shares a little something they picked up along the way. First stop: Origins. Stories of new beginnings and authentic roots.
Talking politics, brunch, and post-9/11 NYC with frontman of The Strokes - aka the big JC.
Huck's annual celebration of visual storytelling is back.