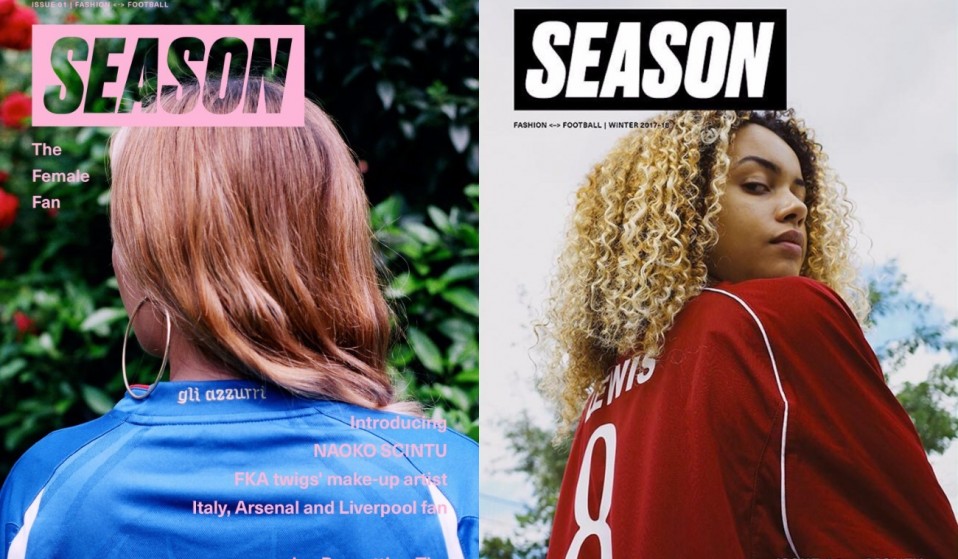 Being a female football fan is hard. People (read: men) can tend to second-guess your authenticity as a fan, quizzing you on your football knowledge just because of your gender. They doubt how much you know, and you often get accused of only being interested in the sport to impress a boy. (Newsflash: suffering the fate of Liverpool’s 2014 title collapse is not worth impressing any man, ever. Period).

It doesn’t help that there is a lingering, glaring gender disparity in football both on and off the pitch. Female fan culture is highly sexualised, and women’s football is barely a blip on the radar of the mainstream game (despite the fact that the women’s England team is far superior to the men’s). There is a deep gap of women working in the industry itself – as journalists, as media personalities, as club doctors – and the majority of football media and culture is tailored to appease men. Women in football are just not given enough of a platform, or respected enough, whether they be a player or a spectator.

Felicia Pennant aims to change this narrative. Felicia is the founder and editor of SEASON, a zine that champions female football fans and strives to reimagine the stereotypes that go along with the term. She created SEASON after becoming disillusioned with the male-oriented nature of modern football coverage; combining her passions for both football and fashion into a powder-pink, design-led zine that charts the fascinating stories of women who are involved in both industries.

The spreads include female fans recounting the very best and most nostalgic of their football memories alongside tattoo anecdotes, matchday scarves, Adidas socks and Fred Perry shirts. Felicia has interviewed the likes of FKA Twigs’ makeup artist Naoko Scintu, who became inspired by Fernando Torres’ sweat-covered, glistening face when applying the same glowing sheen onto her clients; to Girlfans founder Jacqui McAssey, who photographs female football fan culture. We chatted to Felicia about SEASON and their latest issue, which is out this week. 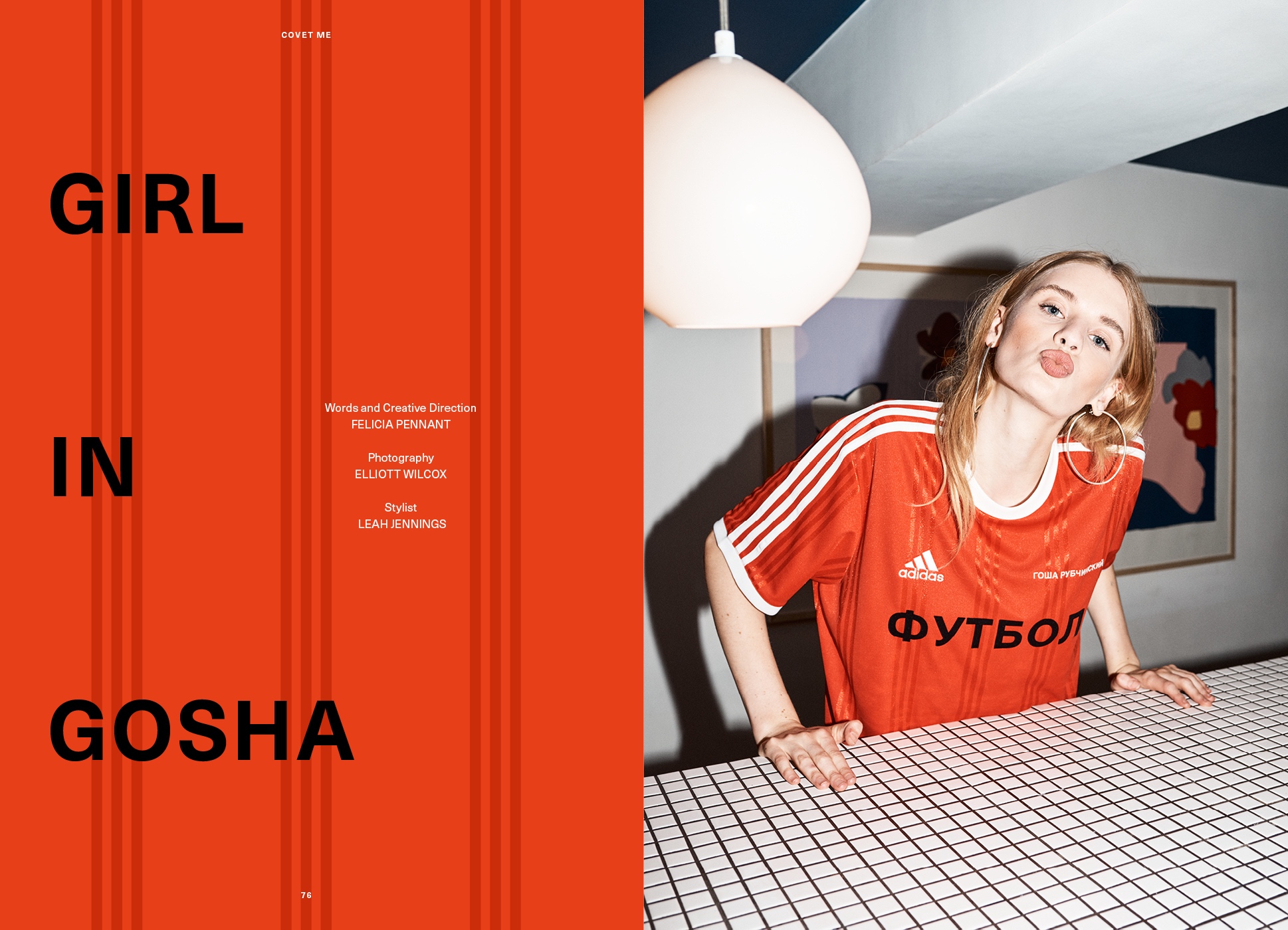 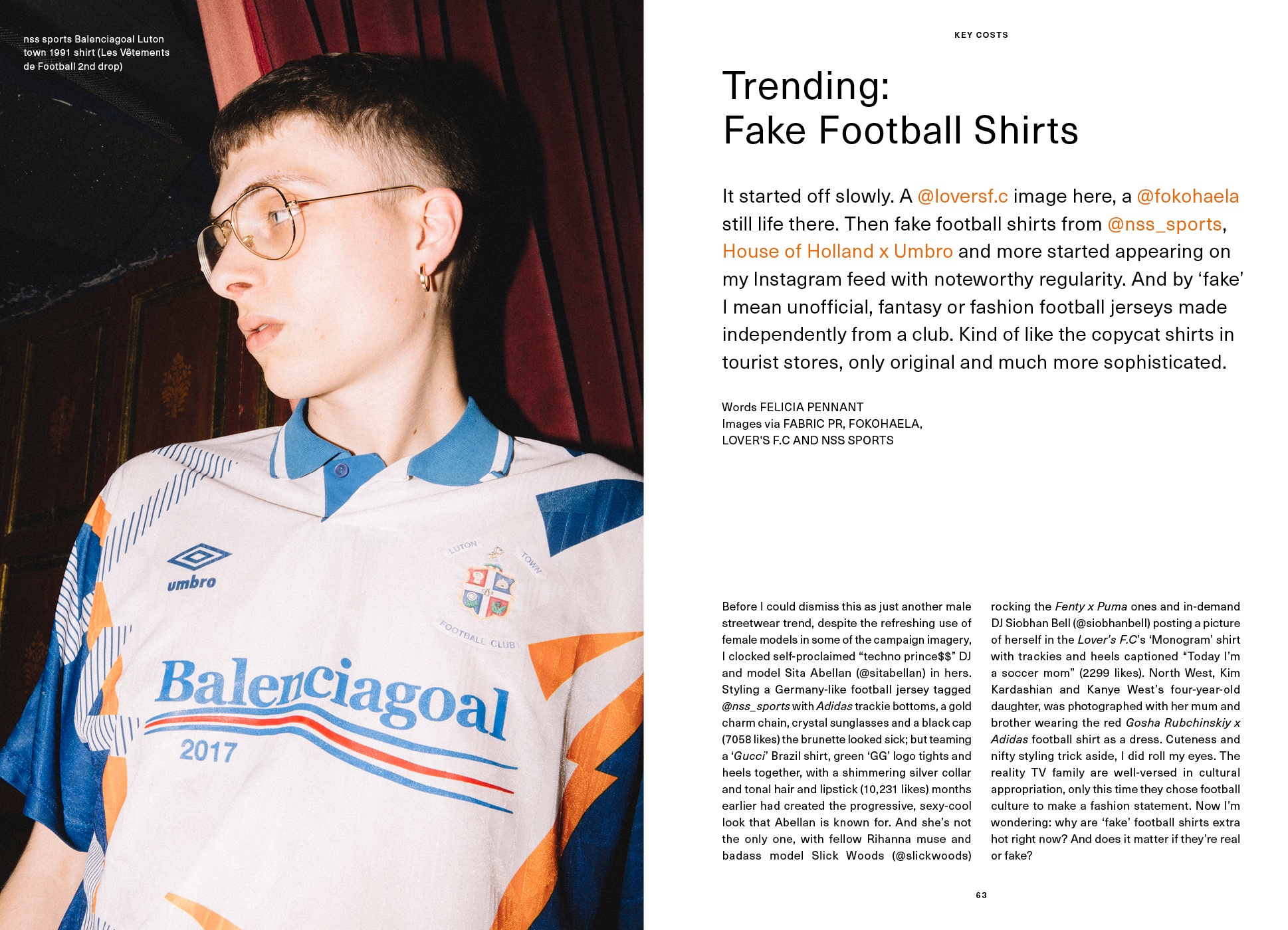 What inspired you to create SEASON?
I’d been thinking about connecting with more women who are into football. You look at today’s [creative publishing] scene and you realise that there isn’t anything for us. It’s always guys creating things for women. I started SEASON after I graduated, when I was working in fashion full-time. It became a creative outlet for me. I love fashion, and it’s always been a big part of my life, but so has football. It’s a nice contrast.

You’ve created a really interesting community that bridges the gap between football and fashion culture.
I’ve just always wanted to hear from fans. It can be quite lonely being a female football fan. You build a great community of female football fans as a player, but if you don’t play, it’s hard. I think it’s perfectly legitimate to not be interested in playing. I love football, but I’m not into playing it.

There are never any stereotypes of female fans in SEASON. We want to speak to all these diverse and interesting women, with unique stories they might not even tell you if you met them. You sit down with someone and it’s the stories you wouldn’t get anywhere else. 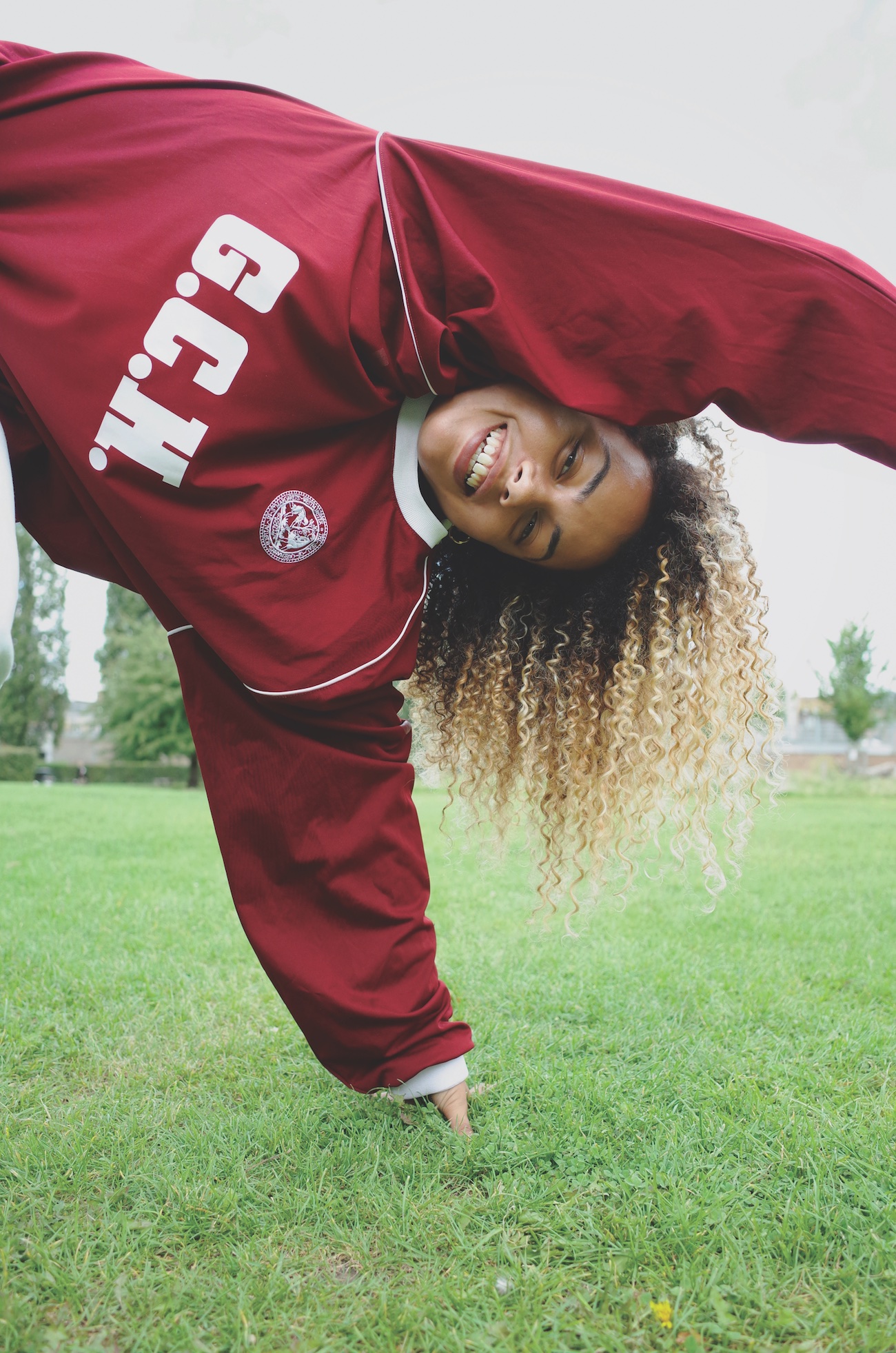 How did you become a football fan?
I watched Euro 2004 in Portugal, and I’d wanted to delve into it more. Living in South West London, Chelsea is so close to me. My dad’s a Chelsea fan, and watching the games together was something we did as a hobby. It was all very organic. My dad has no sons, so he loved it. [Watching football] just affects your mood. It’s an escape, something that resonates. You’ve got all this soap opera drama supporting your team. You can talk to anyone in the world about it. It’s the universal language.

How do you feel about the myth that there just aren’t enough women who are interested in watching football?
The stats are clear. 25 per cent of women go to Premier League matchday. It’s a sizeable minority. They want to get more women into football, but there are a lot of women who don’t necessarily want to play but still want to be involved. I think it’s commendable, trying to level the disparity on the pitch – but don’t forget about the creatives, the writers, and other women who still want to be involved. 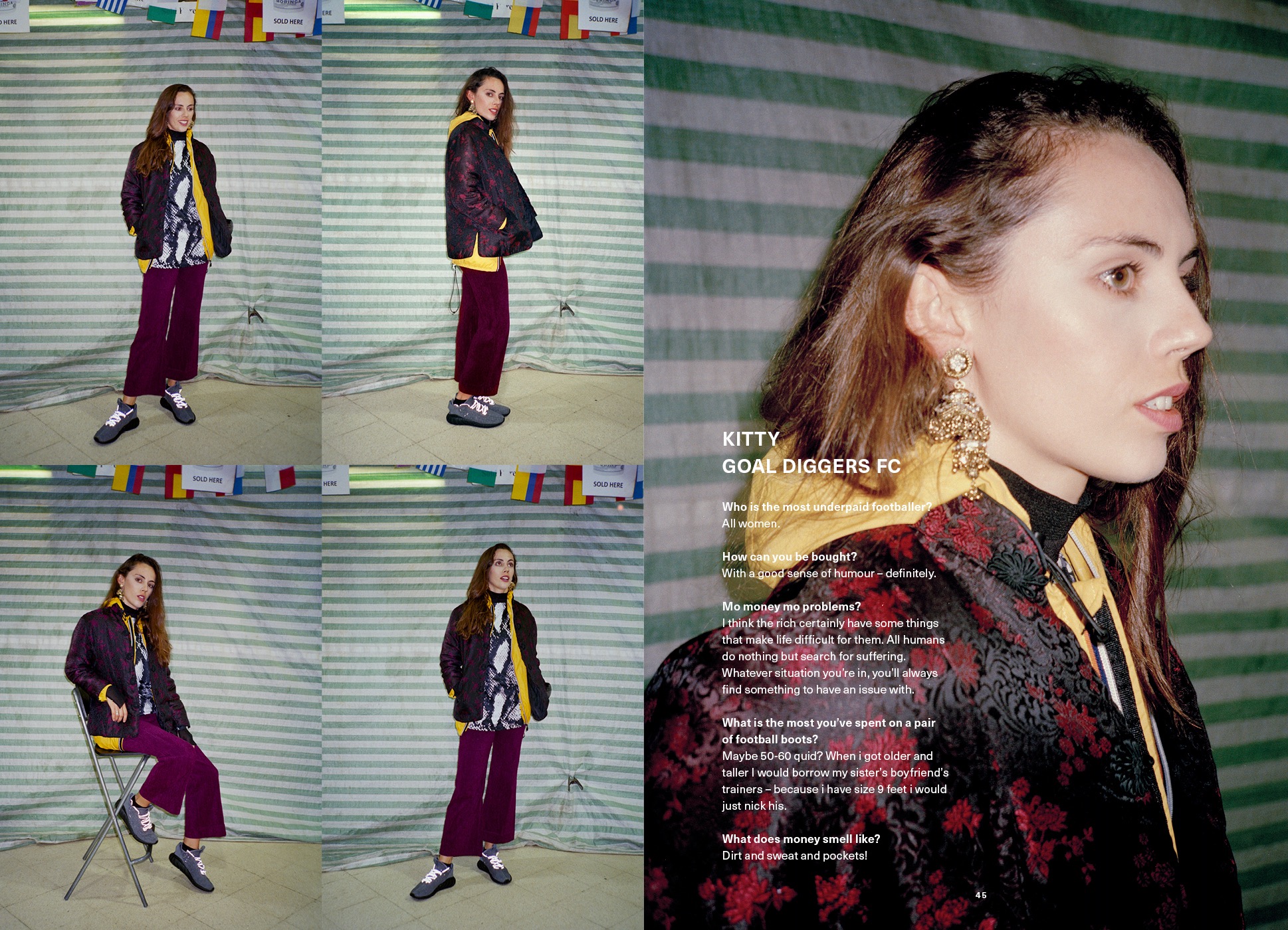 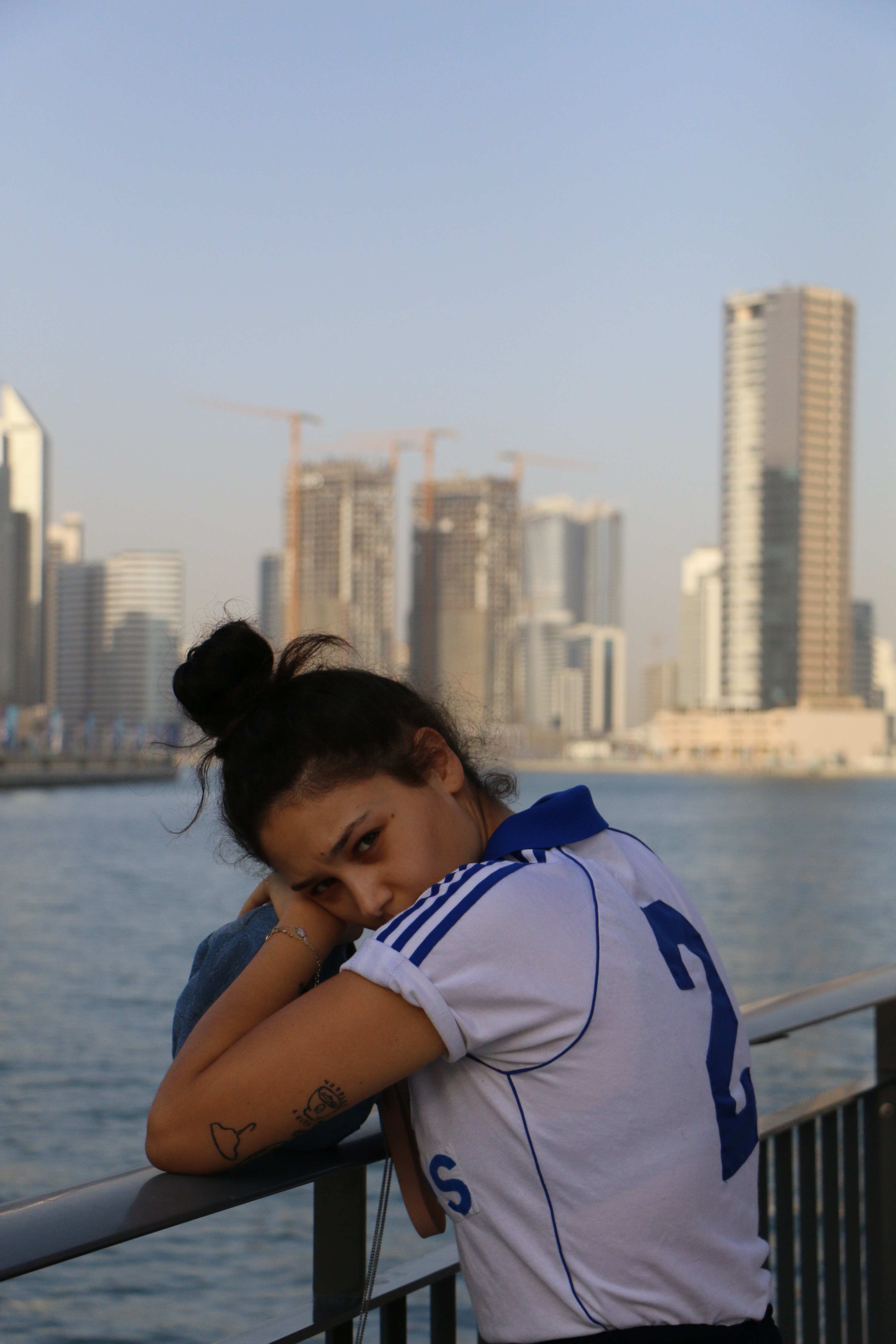 The theme of your next issue is about “money”. Were you inspired by Neymar’s €222m transfer to PSG?
It wasn’t inspired by transfer fees specifically. We’re all poor, we’re young, we’re all in Brexit, and a lot of people live at home – all of us are broke. But people don’t like talking about money.

What more can we do to level the gap?
Chelsea Ladies are doing really great. I think everyone should get involved with the women’s game – the men need to do their part as well. It’s also about coverage. The Guardian does the most consistent women’s coverage, but there rarely is any in the mainstream media. You get male footballers everywhere – on the back pages, the billboards. It’s a narrative. With men’s football, you’re bombarded. How do you expect to grow, then, and cultivate this environment of women in football?

Text has been edited for length and clarity. Buy your copy of SEASON on the zine’s official website.

Linkedin
RELATED ARTICLES
OTHER ARTICLES
After a devastating fire, creatives in the city are coming together to call for more affordable workspaces.
Jamel Shabazz’s photos honour those who were lost and those who survived one of the most brutal eras in recent history.
With the singer’s tour in full swing, we sat down the musical production company who made the electrifying show possible.
SOAS Detainee Support detail the appalling conditions they witnessed at the dangerously overcrowded immigration centre in Kent.
Shaunak Sen discusses his documentary chronicling an ad hoc hospital’s efforts to protect the city’s birds of prey.
The photographer reflects on a decade which saw the rise of MTV and the flourishing of new genres.