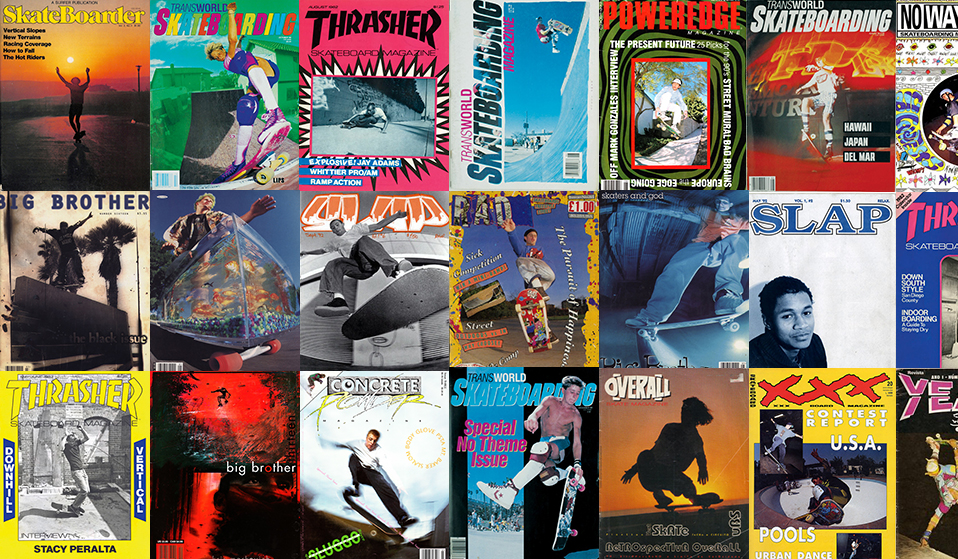 When Kevin Marks turned his skate archive into a free reading resource, it developed into a network of libraries determined to preserve skate culture, promote literacy and celebrate community.

When Kevin Marks turned his skate archive into a free reading resource, it developed into a network of libraries determined to preserve skate culture, promote literacy and celebrate community.

Growing up in Wichita, Kansas during the 1980s, Kevin Marks found a connection to the wider world through skate magazines. The teen soon quit mowing lawns and got a job in a skate shop, fully immersing himself in the culture that surrounded it.

Magazines represented the part he cherished most. It wasn’t just the photos or the tricks – awe-inspiring moments you could rip out and plaster across your bedroom wall. It felt like a vital form of communication. There was so much to soak up that it broadened your horizons without even realising. 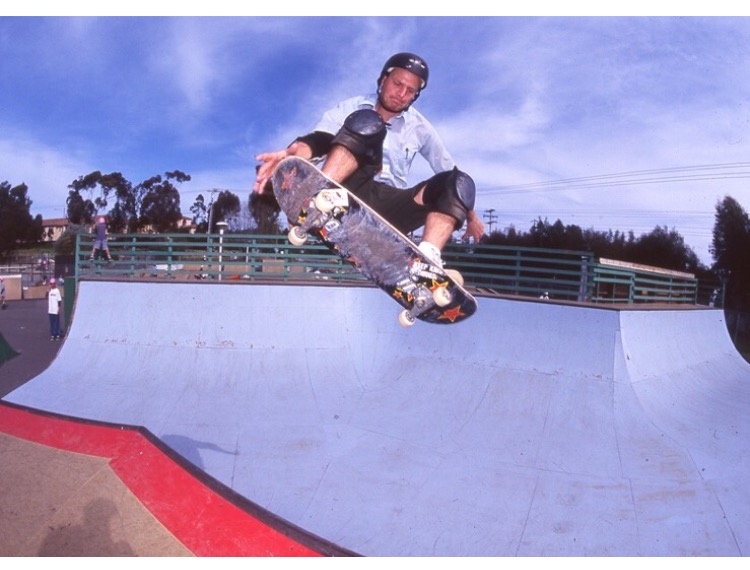 So when Kevin moved to Colorado for college in 1990, his magazine collection came with him. It did so again when he headed to San Diego five years later, where he became the international sales manager at skate distribution company Tum Yeto.

“I’ve worked in skateboarding my entire working life and magazine subscriptions were always a central focus for me,” he says now. “But that job opened me up to all the magazines produced around the world.” 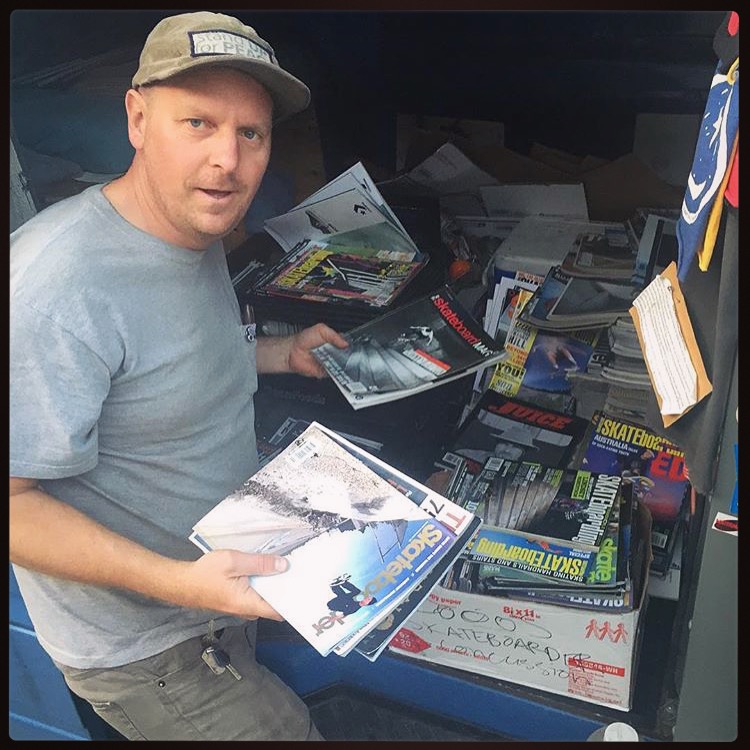 Over the years, Kevin would write for the likes of Thrasher, Slap and Transworld Skateboarding as well as running his own skate shop (twice) and distribution company, Overboard Enterprises. But in 2012, the magazine collection he’d been growing for four decades took on new significance.

His friend Andy Weiss ran a non-profit called Launch: Community through Skateboarding and asked Kevin to help out. One of the first things Kevin did was bolster the library of skate mags at their headquarters in Fort Collins, Colorado over the course of a summer. “I loved working on that project so much that a lightbulb went on. I thought, ‘Maybe I can turn this whole idea into its own non-profit.’” 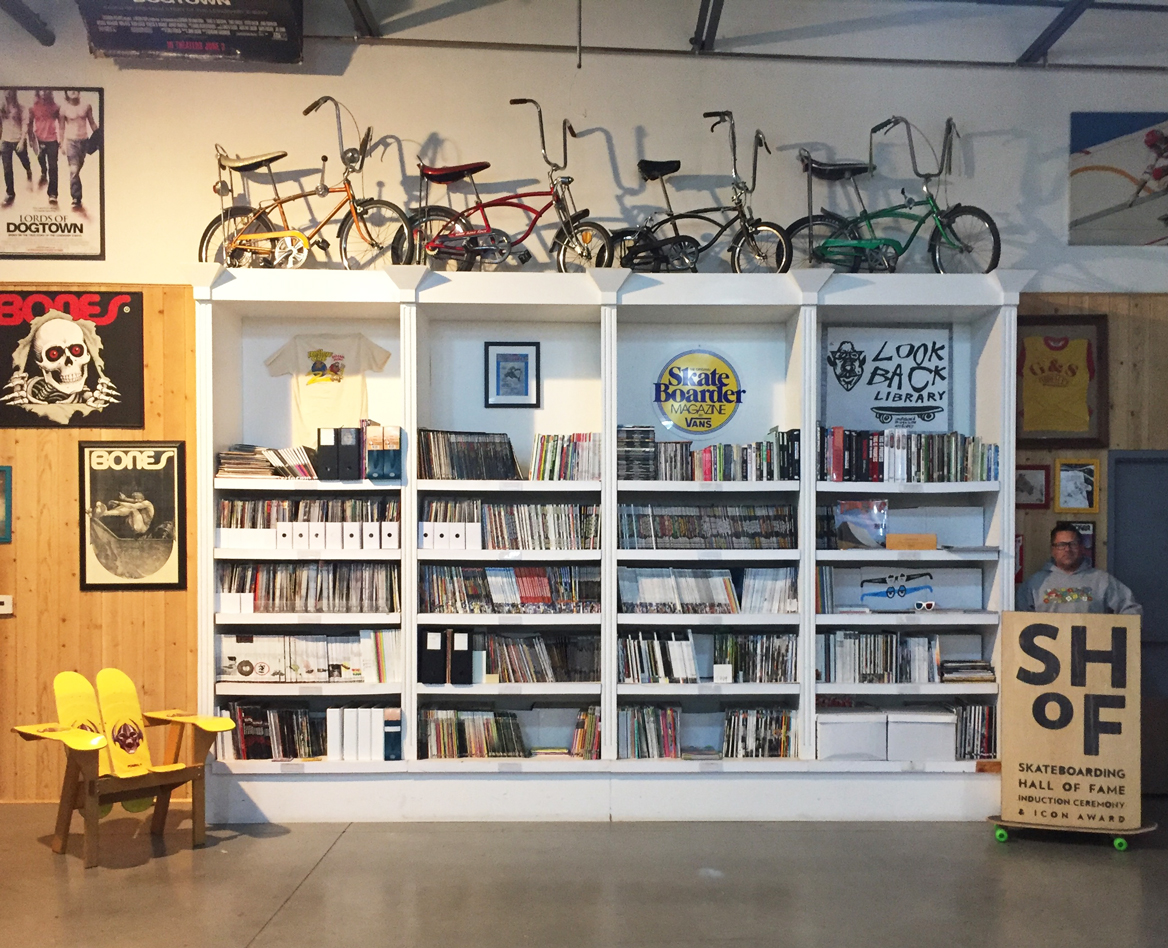 Five years later, Look Back Library has grown into a network of over 70 locations across the globe with regular travelling exhibits. It relies on donated copies as well as keepsakes rescued from closets, basements and attics.

Kevin has a whole room just for new arrivals: stacks and crates of dogeared issues that need to be processed, put in order, then sent off to whichever library needs a particular hard-to-find copy the most.

International skate mags or self-published zines from the ’80s and ’90s are always sought after, but the ‘Holy Grail’ rarities include a Thrasher #1, Big Brother #7 (which has eight different covers), Poweredge #1 and the two issues of The Quarterly Skateboarder magazine from 1965. 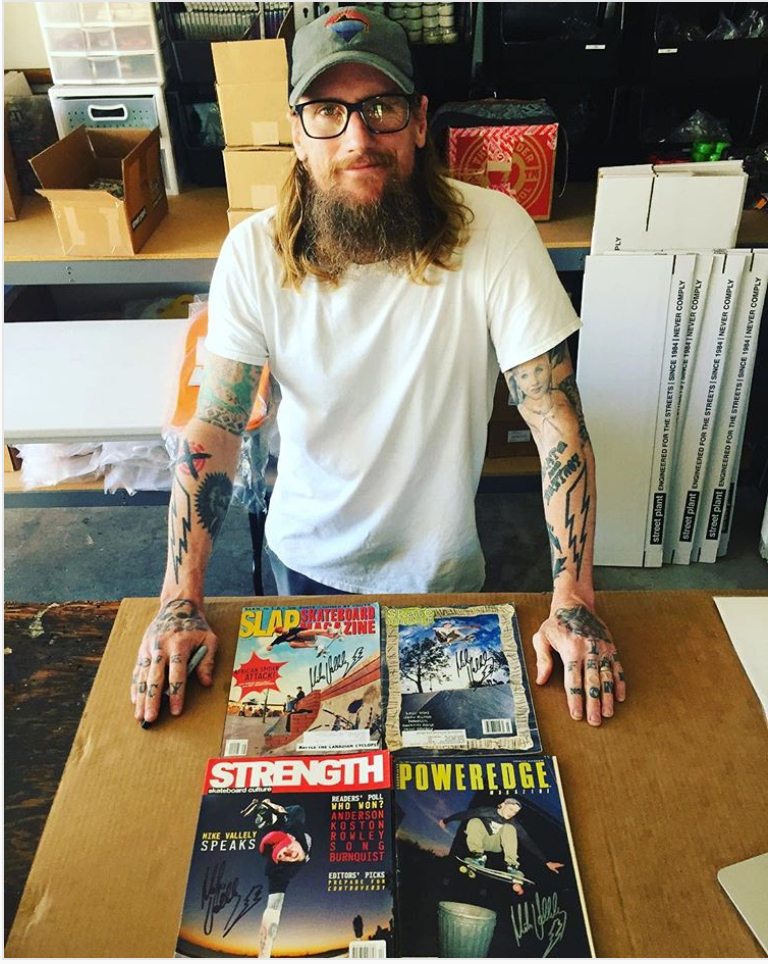 Skate legend Mike Vallely signs some of the mag covers he has graced.

“These magazines are time capsules and the moment you see them you may be transported back in time to the first time you saw one,” says Kevin, who still remembers the moment he discovered skateboarding while watching the movie Back to the Future.

“On the macro level, I adore meeting others skaters that hold print in the same esteem as I do. On the micro level, I love finding that last mag needed to complete a set of Thrasher, Big Brother or Slap.” 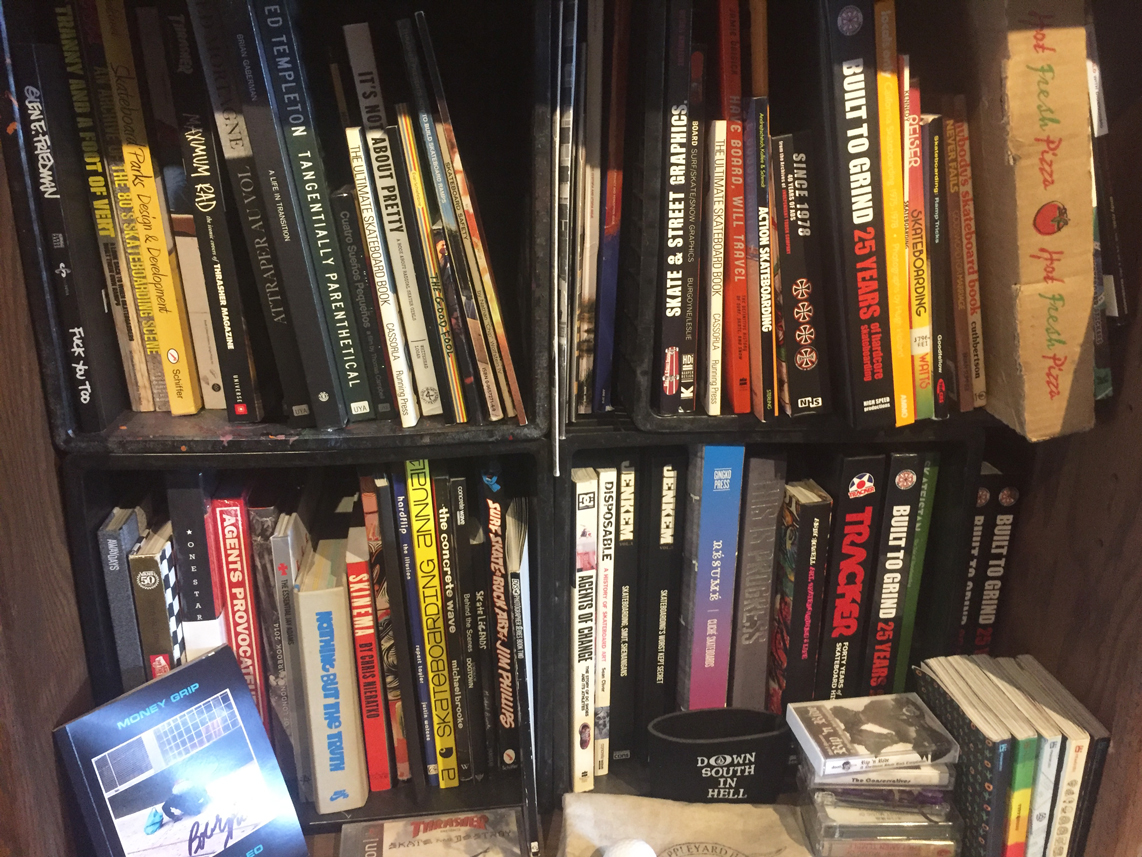 The Look Back Library HQ in San Diego.

But Look Back has become something much more than a preservation society for skate history. A consequence of celebrating printed media and building publicly accessible libraries is that the project has quickly evolved as an effective tool for promoting literacy.

“I’ve never been a strong reader of books, but I would read my skate mags front to back many times over,” says Kevin. “And I’ve come to know many parents who can only get their kids to read skate mags.”

A big help in that process is the involvement of respected pro riders like Ed Templeton and Lacey Baker – who will often donate and sign copies from their personal collection. 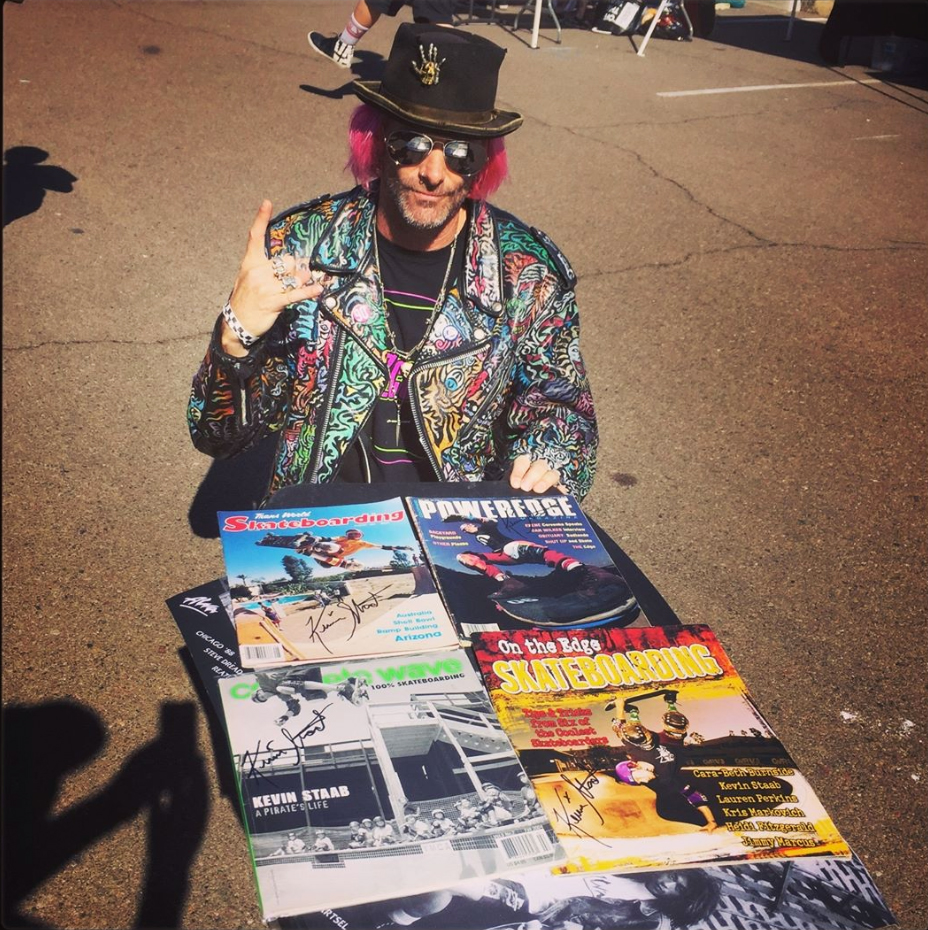 Kevin Staab with his signed covers at SkaterCon Phoenix.

“Most of the pros I encounter love seeing their covers all in one place,” says Kevin. “It takes them down memory lane and I cherish hearing the stories they tell about the day that the cover was shot.”

“It all works a lot smoother when pros understand what I’m doing and trust me. Including them and their stories makes what I do that much more rich and meaningful. Any time we get a repost or a mention on a pro’s Instagram, it helps us immensely.”

Linkedin
RELATED ARTICLES
OTHER ARTICLES
The situation in Afghanistan remains dire, with many groups facing persecution at the hands of the Taliban.
In the last of our dispatches from OFFF Barcelona, Rufus Deuchler and Vincent Gault discuss the future of creative process.
Over the weekend, London locals came together to resist a pre-planned police raid targeting delivery drivers.
Our new magazine is here, starring the inimitable Mitski. Order your copy now and join us on a trip around the world.
Following the success of her debut novel, the Tottenham native is restating her commitment to the place that made her.
After news broke last week around an expected reversal of the 1973 landmark law that made abortion legal in the US, protestors gathered in the UK in support of American women.