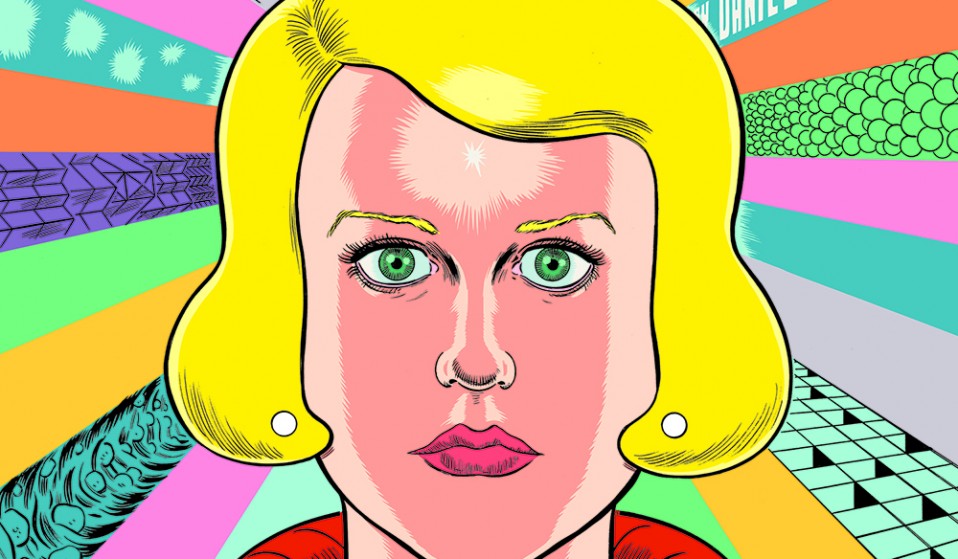 Best known for generation-defining works like Ghost World, Art School Confidential and Pussey!, Daniel Clowes has now returned with time-travel thriller Patience. But while it might seem like a radical departure into a new genre, youthful pain and anxiety remains at its heart.

For an entire generation of us, discovering Daniel Clowes’ Ghost World was a formative experience – a Gen-X version of what we hear happened when ’70s kids read Catcher in the Rye, or when British youth in the 1960’s first heard the Beatles. Few elements of popular culture at the tail end of the 20th century summed up the kind of apathetic cool of modern disaffected youth better than the banal adventures of Enid and Rebecca. Casually riffing on the relentless lameness of their peers, bemoaning modern society, they were adolescence brought to near-life – Clowes capturing all the rage, cynicism and far-away hope of being young and insecure. 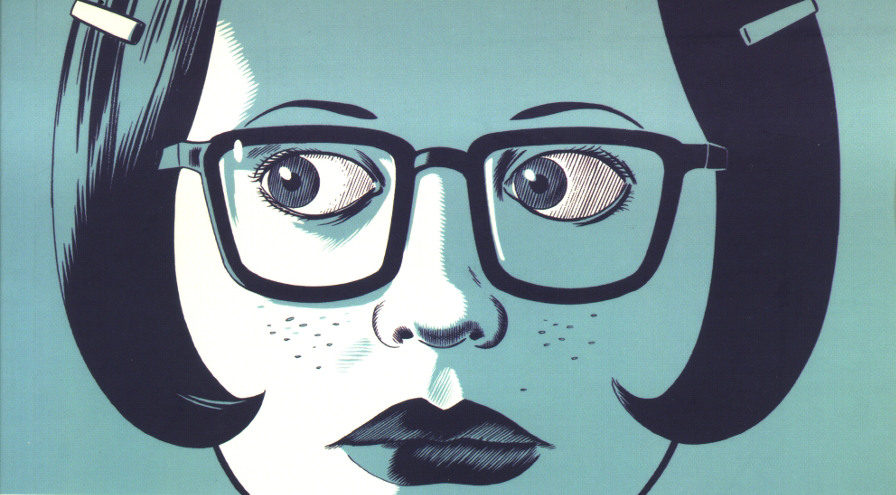 On the surface, Clowes’ new graphic novel Patience, released this week, is a wild detour from the stories that made his name – closer in spirit to his subversive superhero tale The Death-Ray than the paranoid neuroses of Mister Wonderful. A sprawling time-travel epic, Patience is set within varying timelines, characters intersecting in different decades and at different ages, all united by a baffling, seemingly unavoidable murder.

But dig a little deeper and you will find the same crushing young adults at its heart. As the novel opens, Jack and Patience are anxious young marrieds in 2012 whose just-discovered pregnancy drives them to start asking all the big questions about mortality and the future (“What if global warming gets really bad? We’ll be dead before then, probably, but what about the poor baby?”) Not that they have long to ponder – within pages Patience is dead, leading Jack on a gargantuan quest to right a wrong through the aid of a device that sends him spiralling back and forth through time.

It’s in these time loops that Patience’s troubled upbringing comes into light, as much for readers as it does for Jack. Now glimpsed as a teenager in 2006, the young Patience strives to move past her “totally damaged” high school years. But she’s also stuck waiting tables in the same small town she’s grown up in, serving assholes who vaguely know her story – “Didn’t you go to Limbert?”, one guy asks. “Congrats on landing such an awesome job.” Home is similarly bleak. Her stepfather is a lecherous creep, her mom is mostly absent, and her older, meaner ex has just been sprung from jail. 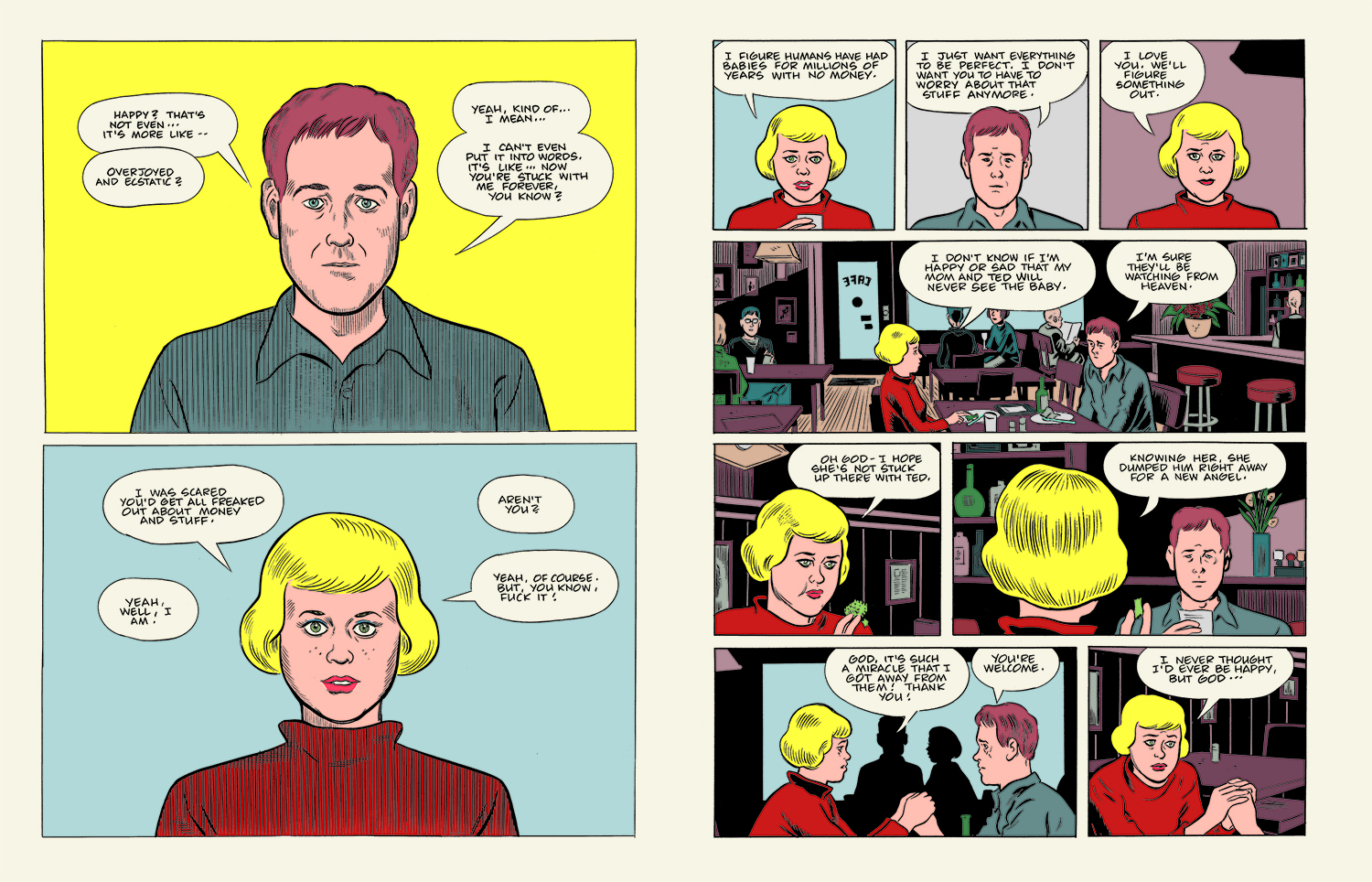 Clowes’ writing quickly becomes a heartbreaking exploration of post-traumatic stress, Patience’s abusive adolescence suppressed over time by sheer necessity, but memories manifesting later on just as her life seems to have turned a corner. Events unfold over occasionally criss-crossing narratives, Jack lurking in the corner of different points in his and Patience’s respective histories. So desperate is he to alter the future that his journey is a parade of ‘kill Baby Hitler’ moves and accidental event-altering that quickly spirals out of control.

While Jack is the story’s de facto lead, responsible for its unfolding narrative and time traveling plot twists, it’s Patience who is the book’s heart and soul. She’s the sort of character who probably would have read Ghost World in her teens, too. It’s all there: The youthful apathy that quickly turns into a permanently alienated post-high school funk; the fantasy of riding off into the unknown with the hopes that things will somehow figure out. 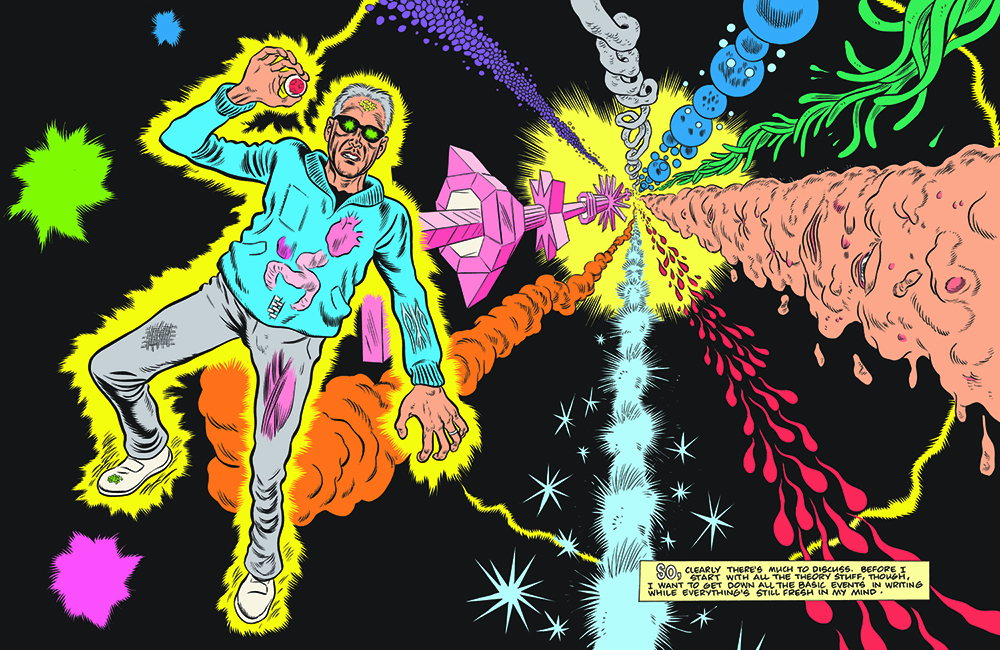 Anyone who is a fan of Clowes knows his work has a near-constant metatextual charm, from Enid describing the ‘Daniel Clowes’ of her Ghost World universe as an “old perv”, to the brutal takedown of student creatives like Clowes himself in 1991’s Art School Confidential. Patience is no different. There’s a scene towards the very end of Ghost World in which Enid finally interacts with the elusive astrologer Bob Skeetes, who proceeds to read her ‘aura’. Skeetes says that he glimpses a future version of young Enid, someone who is a sexual libertine but has a haunted quality. “I see a road ahead with many forks,” he tells her, “all of which lead, it seems, to gloom and darkness.”

Patience is in many ways a spiritual successor to that prophetic, climactic vision. It’s a story about the apparently inevitable, of people who feel doomed to failure and self-destruction. But, naïve or not, they’ll do anything to cling onto the hope of change. Even if it means bending time to reach it. Clowes’ characters may have grown up, but the pain of adolescence still lingers. 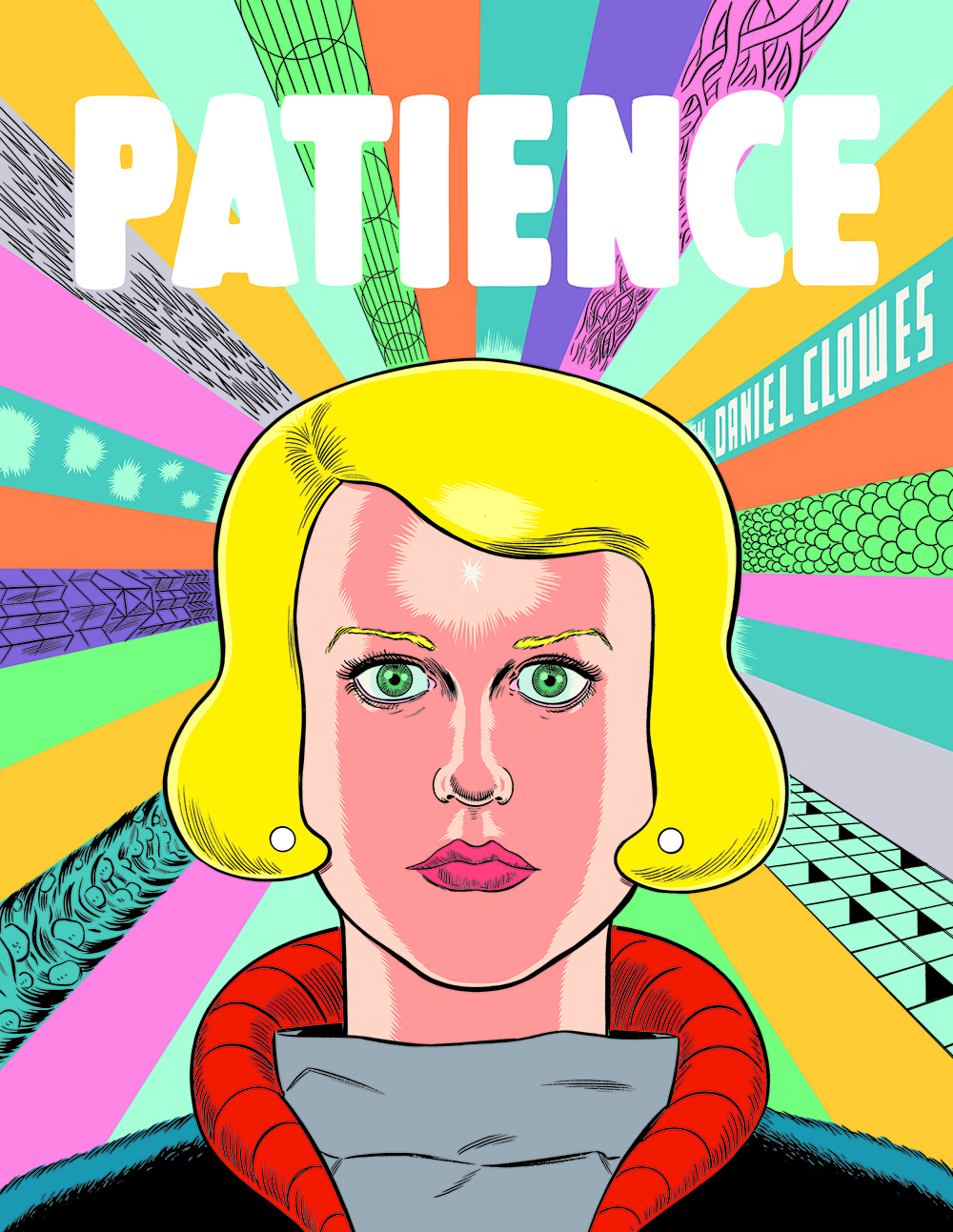 Patience, published by Fantagraphics, is out now.

Linkedin
RELATED ARTICLES
OTHER ARTICLES
After fleeing the war in Ukraine, people are finding it impossible to secure affordable and decent housing in the UK.
David 'Dee' Delgado’s photo project is about honouring and uplifting the city of his youth, and a world rapidly disappearing under the relentless onslaught of gentrification.
Since 2007, Gideon Mendel has made 20 trips to document floods in 13 countries. The result is an alarming record of what has already been lost to the climate emergency.
Photographer Sean Maung reflects on documenting a small town in Pennsylvania afflicted by high levels of unemployment, poverty, violence, crime, and addiction.
A recent High Court ruling against the right to wild camp in Dartmoor National Park sparked the largest land protest in history – and campaigners say their fight is not over yet.
Following the release of his debut single, Deyaz talks battling addiction, dealing with his struggles through music, and building a budding music career from his living room.