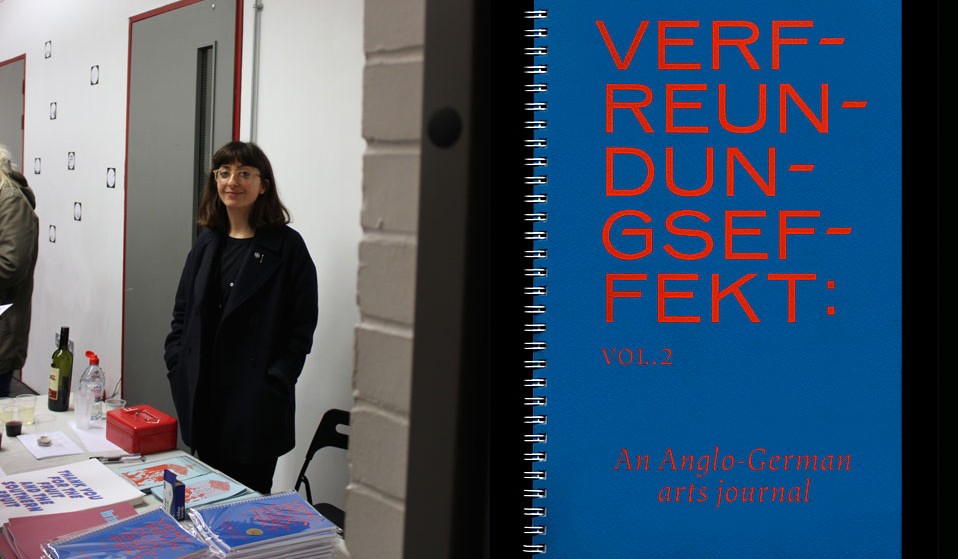 For the second edition of Anglo-German arts journal Verfreundungseffekt, editor Jen Calleja breaks some stereotypes with wrestlers and The Simpsons.

For the second edition of Anglo-German arts journal Verfreundungseffekt, editor Jen Calleja breaks some stereotypes with wrestlers and The Simpsons.

Hey, wake up! There’s a whole world out there and you’re probably too consumed by your little corner of it to notice. Such is the attitude that writer and editor Jen Calleja is seeking to counteract with the second volume of her self-published arts journal Verfreundungseffekt.

With a mission statement to “prove that an Anglo-German culture exists”, Verfreundungseffekt acts as a record of real experiences, interests, memories and passions to do with the opposite culture (German-speakers on English-speaking culture, and vice versa) and includes everything from political German wrestlers to funny German allusions in The Simpsons.

We caught up with Jen to find out more.

What exactly is Verfreundungseffekt?
Verfreundungseffekt was once one thing but is now many things: it’s an Anglo-German arts journal that I edit and self-publish with its designer Joe Hales – the second volume of which came out last week; a series of ongoing events that I curate and co-curate on Anglo-German culture; and as of this week a column on literature in translation on The Quietus.

The word itself is made-up, but based on Brecht’s Verfremdungseffekt in theatre, my version means something like ‘friendation’ rather than ‘distantation/alienation’. It refers to both recognising the uncanny and strange things about foreign cultures while also remaining curious and forming real, passionate connections with those cultures. As the journal is a collection of contributions where German-speakers take up something British or American, and English-speakers take inspiration for their pieces from German-language culture, it is a record of interest in one another’s cultures and offers up an external perspective on one another’s socio-cultural identity.

What’s your favourite piece from this issue and why?
I genuinely love every piece but I’ll give you a top three: Thomas J. Hughes of the wrestling zine Shooting Star Press interviewing German politician and wrestler Matthias Ilgen (talk about smashing an archetype); Susan Thorne’s two pieces (an article and a brand new translation) on a true Anglo-German and the German-born but anglophilic Uwe Johnson who lived, worked and died in England; and Rita Calvo’s piece ‘Everything You Need to Know About Germany Can be Learned From Simpsons Quotes: And Other Terrible and Patently Incorrect Beliefs I Hold’, which is a collection of the most hilarious lines on German, Germany and German characters in The Simpsons. I laugh every time I read it.

Who do you hope the journal reaches?
It will obviously appeal to those interested in cross-cultural arts and translation, but it’s for anyone interested in excellent and interesting text and image-based work on visual arts, music and literature; the journal is that first and foremost with German culture as the theme running through it.

I don’t think it’s too much to hope that it’ll inspire people to become curious about foreign culture and languages as well as other editors, curators and platforms to widen their field to look at writing in translation, inspirational voices from abroad, and the multi and cross-cultural experience and dialogue. The ideal situation would be if someone who has no interest in foreign languages and culture got hold of it and they had some kind of epiphany.

Germany interested me as a teenager so I moved there, made German friends, learnt German, then came back and taught myself German to a high enough level during my undergraduate degree in literature and writing to do an MA in German Studies and become a literary translator from German. Maybe it’ll show people young and old that the key motivation for learning a language may be so you can meet and communicate with others and build friendships, and that career boosts/detours and getting to see a wider, nuanced world view are great possible by-products.

Were any other publications an inspiration?
Yes, consciously and unconsciously. There are other Anglo-German publications that are either wholly or partly in both German and English which I feel a connection to: Young, Fresh & Relevant, edited by Chloe Stead, which publishes art and literary writing by emerging arts practitioners; and I picked up der:die:das last year, a magazine based in Zurich that deconstructs a different object in each issue. I’ve just heard about the Austrian-Australian journal Gangway – I need to look into it before I forget.

Rosie Day and Philip Serfaty’s publication TEAM is a collection of work by their friends or friends of friends and produced in journal form to a beautiful standard.

All DIY publishing interests me and I view myself as part of it. We wanted to make the journal look as good as any other art journal and this is the design style I grew up with, as opposed to the zine aesthetic. It also helps seeing publications like The White Review, Modern Poetry in Translation, Structo etc. that have stuck with publishing attractive physical journals rather than being only online (and that are also really serious about publishing translations). It took me nearly three years to save the money for the second journal while working two jobs, but it’s so nice to hand someone Verfreundungseffekt or to post it rather than emailing a link.

You can buy Verfreundungseffekt volumes I and II on the Bathysphere Editions website.

Linkedin
RELATED ARTICLES
OTHER ARTICLES
One of My Kind (OOMK) celebrates art, thought and creativity from women of all colours and creeds.
Photographer Marco Hernandez shares the characters and architecture that make up his corner of suburban Staten Island.
NYC's only skate mag serves up a beautifully photographed slice of the city's scene.