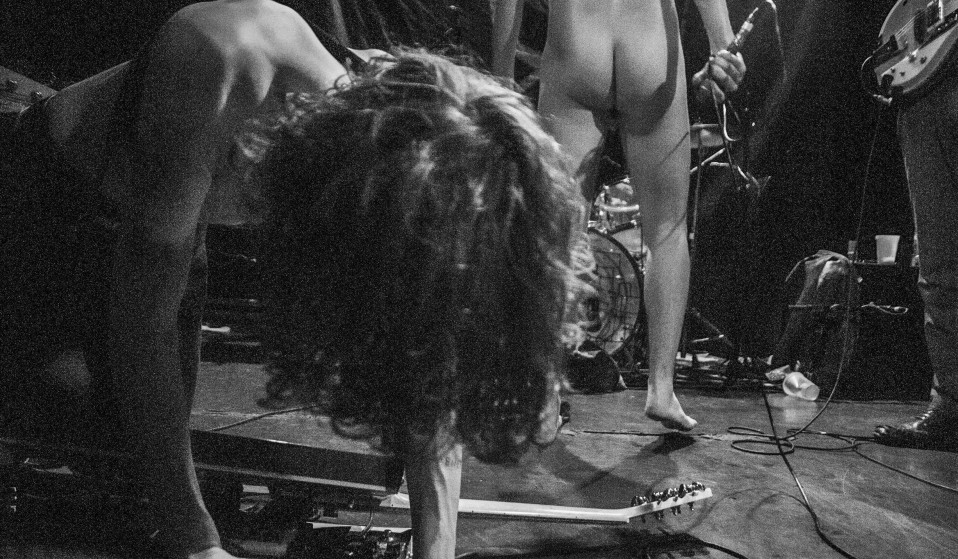 A new collaborative zine between photographers Sacha Lecca and Alec Castillo captures the many facets of the notorious South London six-piece.

A new collaborative zine between photographers Sacha Lecca and Alec Castillo captures the many sides of the notorious South London six-piece, both off-stage and on-stage.

All dripping sweat, partial nudity and smeared butter, it’s very hard to compare a Fat White Family gig to anything else going around today. Their sound stands out with its strange mix of riotous and pulsating, raspy rhythm – their look, a chaotic mixture of a punk band playing in a run-down pub, Iggy Pop in his heyday and a teenager that went through the backroom boxes of a military surplus store.

There has been no shortage of controversies surrounding the band – the themes explored in their music ranging from World War II all the way through to drug addiction, welfare and Disneyland.  There’s also been plenty of in-fighting and reconciliation among the members. All in all, the Fat White Family seem to be some of the last true punk musicians still standing.

Sacha Lecca has been capturing the South London group in action for years. When asked to describe the FWF live experience to those uninitiated, he aptly compares it to “an intense fever dream in music form,” adding that “their shows end as fevers do, with one drenched in sweat and feeling no pain.” 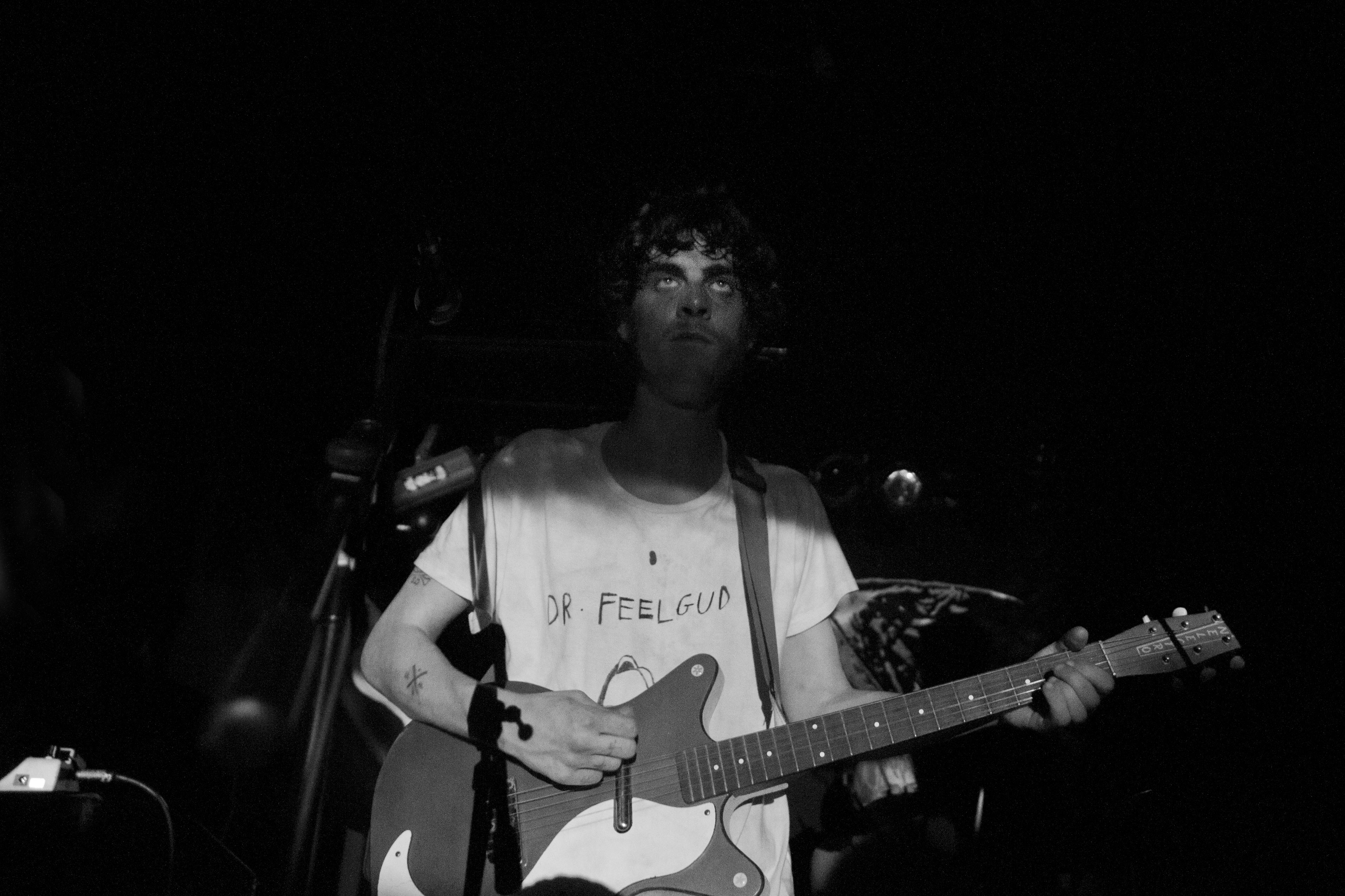 Sacha’s photography of the band was also what first drew young photographer Alec Castillo into the FWF world. Alec had been documenting his own band backstage for years but he was looking for a new challenge – which is why, when the opportunity to follow the six-piece from London on tour came along, he took it and ran with it.

Accessing the Fat White Family’s off-stage life was a completely new experience for the photographer, and a challenge he welcomed with open arms. “I think accessing intimate moments that belong to the subjects is a privilege; it’s also thrilling,” Alex explains. “Fat White Family is the only band I’ve documented on the road other than my own. It was exciting because I had never met the band before joining them on tour, so it required me to gain trust before I could shoot how I would my own band.” 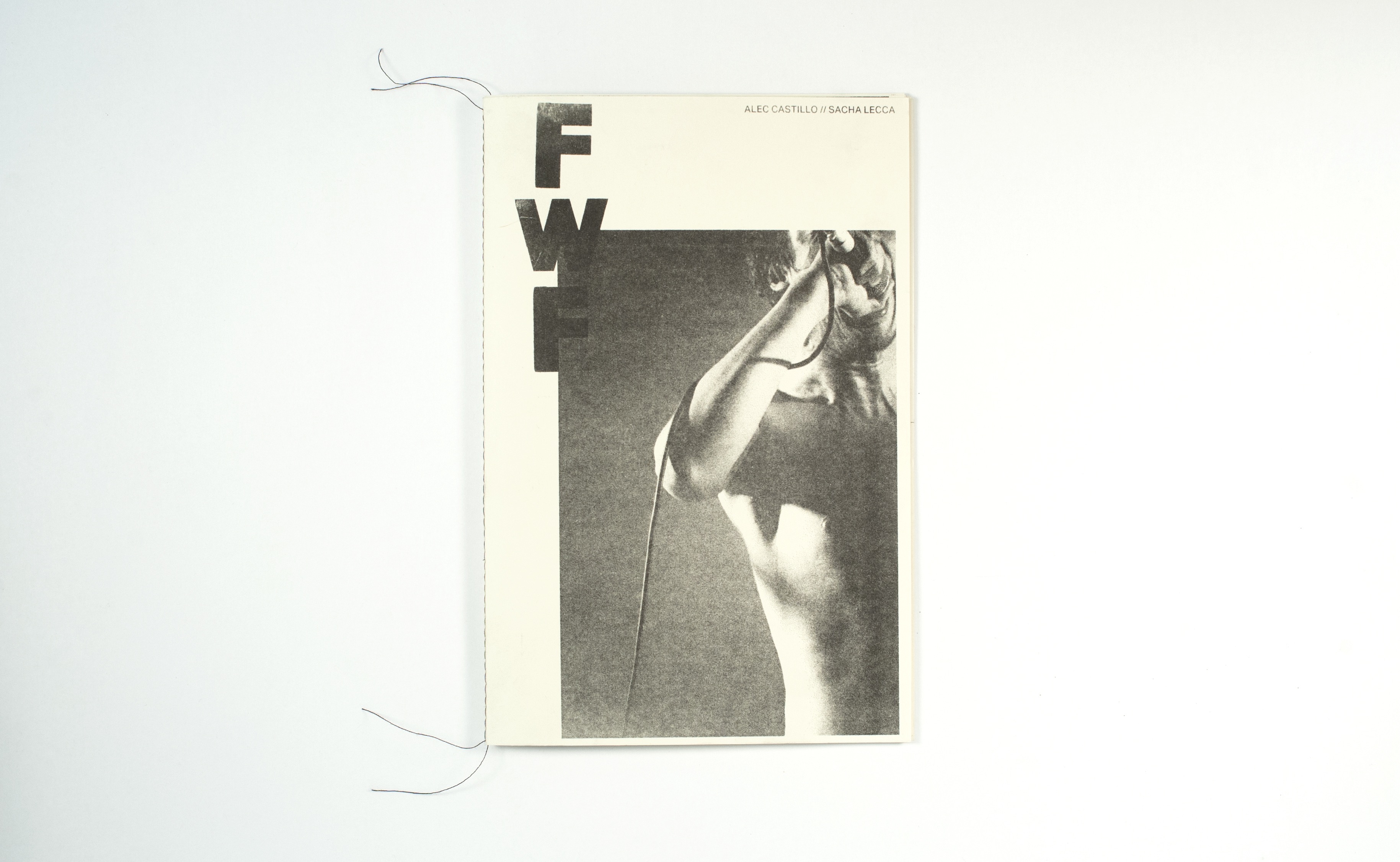 For some time, Alec shot them on the road (an adventure detailed in a story for Huck) and gathered plenty of images, many unseen and unpublished – from relaxed backstage shots all the way through images capturing Lias Saoudi’s frenetic stage presence. As well as capturing the intimate moments, some images are more surreal; like a jam session with Lady Gaga and Sean Lennon at Lennon’s house.

So, when Alec’s friends Jason Wright and Tyreese McDurmont started a small, North Carolina-based press publishing company called UDLI, the idea of a zine seemed almost natural. He reached out to Sacha with the idea, and so, the FWF publication started taking shape.

The zine combines images from both photographers seamlessly, no specified credits or words needed between the grainy black and white images. The idea, Alec tells me, is to tell a collaborative story of the band between their images – one that shows two radically different perspectives: On-stage and off-stage. 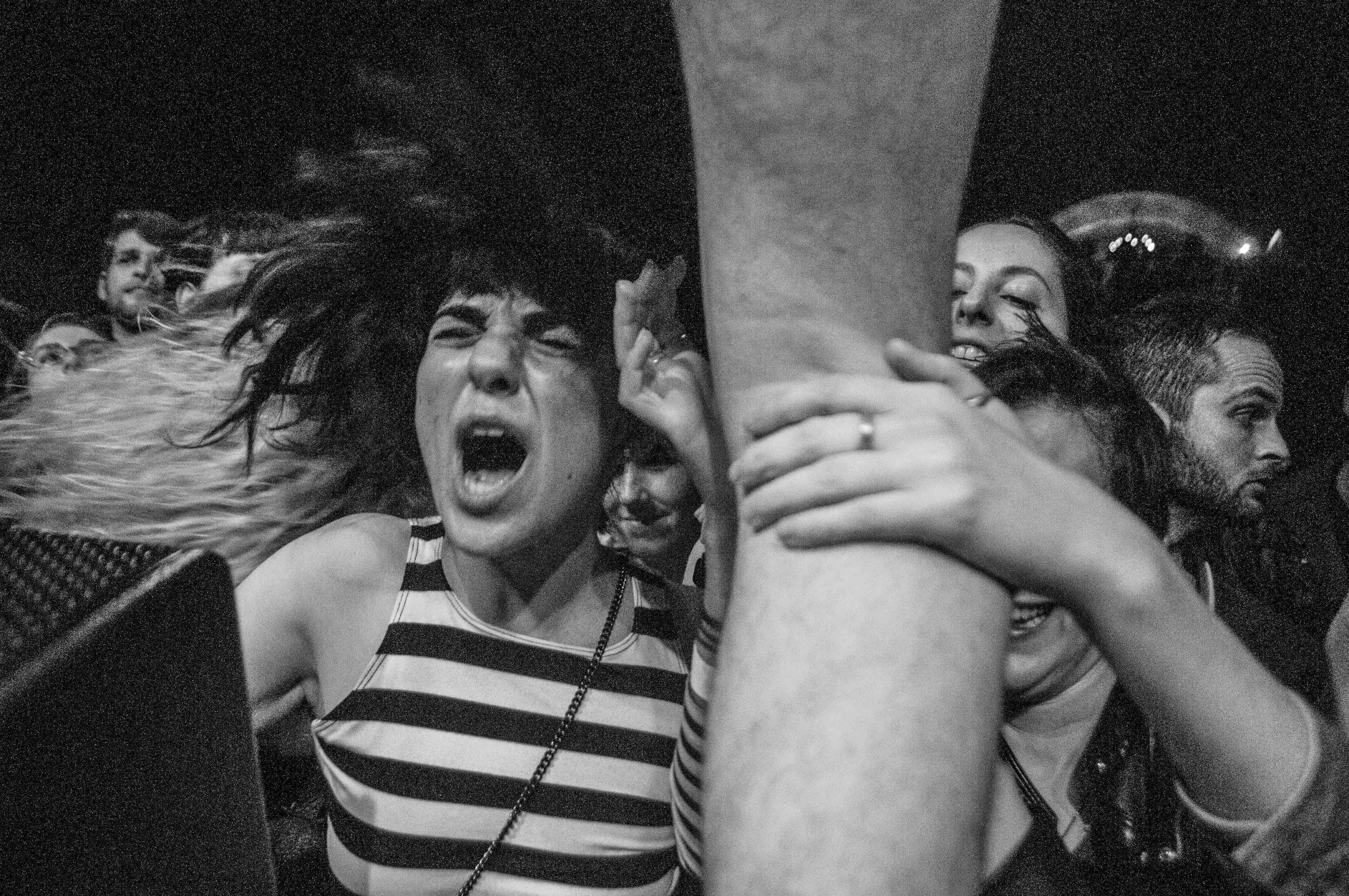 “It made sense to combine our images throughout the zine, with some spreads including both of our photos if there was a connection,” he says. “For example, one of my favourite spreads has Sacha’s photo of Lias on stage, naked, sweating, and screaming into a microphone. It’s an intense and loud image. On the page next to it, is my photo of Nathan [Saoudi] pulling off his sock and Adam [J. Harmer] smoking a cig in a hotel bed, decompressing after a show. These pictures are night and day, but work together to tell a story.”

The purposefully rough aesthetic of the zine matches the images and the band – giving off that old-school DIY punk energy that has been lost in much of the glossy, over-edited live music photography that can be seen going around the internet today.

“You can trace the history of zines back to when DIY punk culture crossed paths with conceptual artists’ books,” says Jason, of UDLI. “Some of the earliest publications that were essential in establishing the artists’ book as a legitimate conceptual medium were photographic in nature – such as Ed Ruscha’s Twenty-Six Gasoline Stations. I think the relationship between photography and zines has only grown since then, due to photography’s ability to be a serial, at times narrative, medium. It is natural for us to want a book, even if it is copier paper stapled together, to tell us a story.” 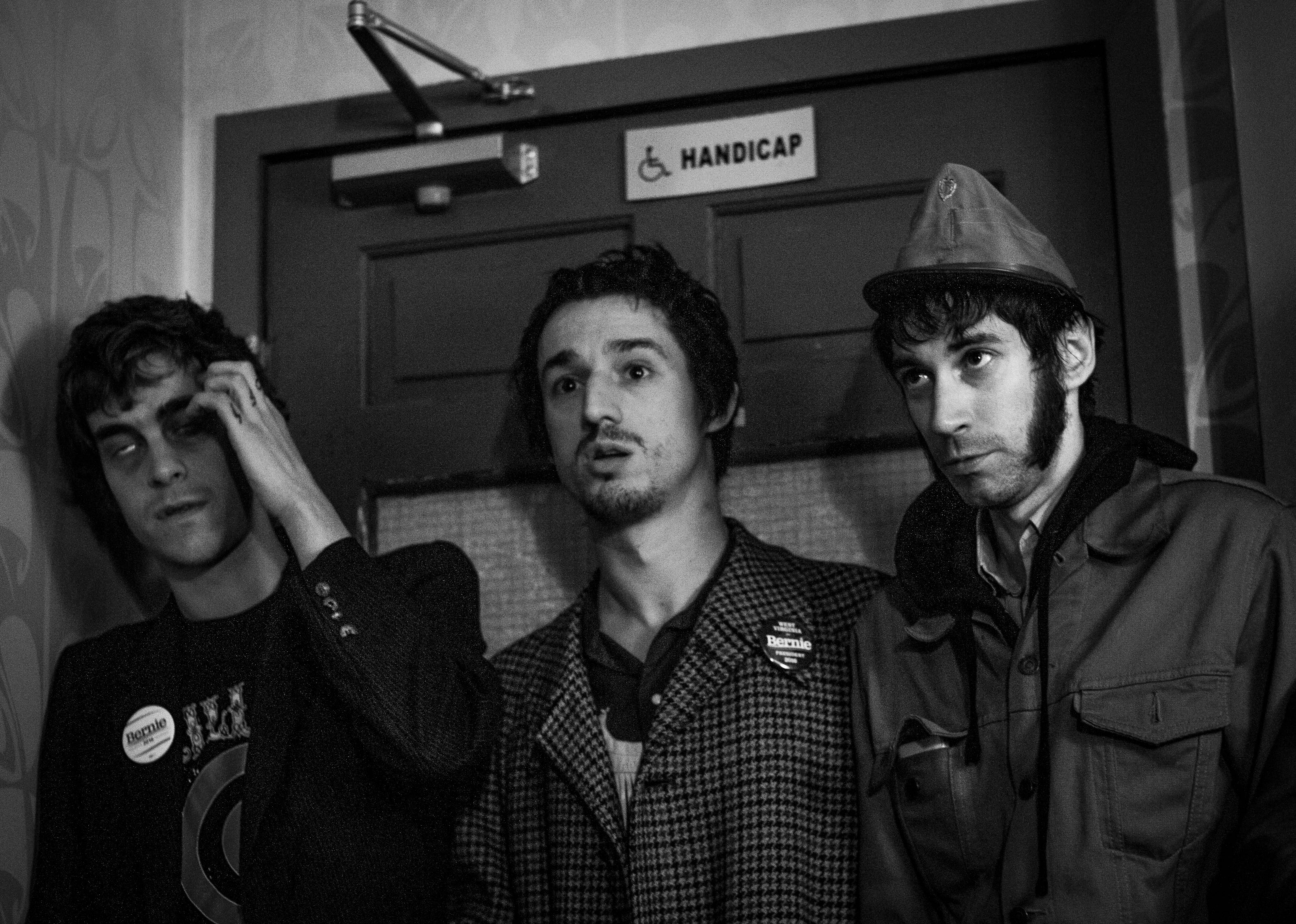 “On the other hand, zines have been, and I like to believe still are, very much rooted in the DIY ethos of punk culture by being a cheap platform to share and collaborate with like-minded (and sometimes not-so like-minded) individuals building a more diverse network of creators,” he adds.

Both Jason and Tyreese believe that zine-making as an accessible way of exploring your creative practice and experimenting with new mediums and materials. I ask what zines all involved in the project have picked up recently, and what were their early influences – everyone is clearly passionate about self-publishing. 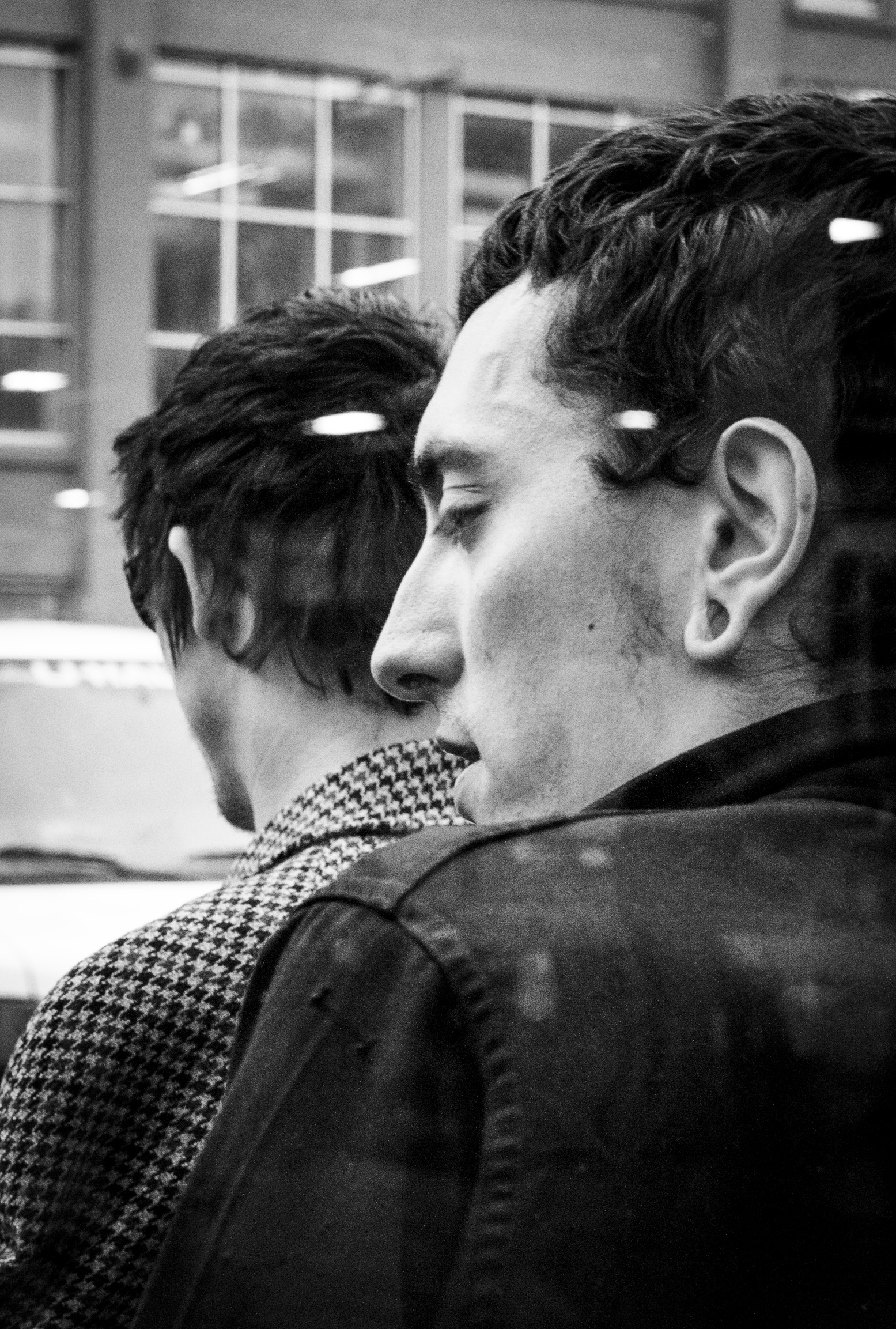 “I do not remember my first zine, but I remember being infatuated with Dash Snow and his work,” says Jason. “I was a young person struggling with drugs, alcohol and how to go about being an artist and I was able to romanticise Snow’s gritty and honest work at surface-value, which legitimised my own strife. It is hard to look at his work these days, but still a very influential source for my passion for zines.”

His current favourites, he says, are too many to name – but honourable mentions go to anything by Emma Kohlmann, Brie Moreno’s Missy and Booger Brie’s Funky Fitting Room, Andy Mister’s Debris Slide, Tape Mind Issue #3, as well as Alexis Gross’ Cuba Zine.

For Tyreese, his exposure to zines began by going to small shows and buying work made by bands. He names Pierce The Veil by N. Hartmann, B. Thom Stevenson’s Quilt Block Paintings published by Commune Press, Slave Diary (The Days of Whips & Roses) by Alex Patrick Dyck & James Concannon also published by Commune, and Losing and Falling.

Sacha’s favourites are by a fellow photographer and photo editor called Mark Murrmann – naming Mess me Up! and Sweat in particular. “I also love Hamburger Eyes and the work out of Pau Wau Publications including the recent-ish The Xeorox Book and Andreas Lazslo Konrath’s Anthony No Name at Gmail Dot Com.”

As for Alec? “A recent gem I picked up is Molly Steele’s I Just Want To Be Warm At Night. Also stoked on anything Cole Barash or Cheryl Dunn put out. Definitely name dropping Caitlin McCann, Daniel Topete, and CJ Harvey – I want to meet y’all.”

FWF by Alec Castillo and Sacha Lecca will be out on September 6, published by UDLI. You can order it via the UDLI Editions website.

Linkedin
RELATED ARTICLES
OTHER ARTICLES
A new series of photos by Johny Pitts shines a light on communities and subcultures that have all too often been overlooked.
After rewriting the indie rulebook with her devastating songs about romantic longing, the singer-songwriter is now imagining a future in which the artist is no longer a product.
Photographer Bud Glick recounts documenting everyday life in the area, and what it taught him about the Chinese immigrant experience.
Protestors gathered outside Downing Street following the latest atrocities committed by Israel against Palestinians living in the besieged strip.
Steel City is often overlooked when it comes to the country's cultural radar despite its role in shaping electronic music.
As the Criminal Bar Association enters its fifth week of action, criminal barrister Russel Fraser explains why the legal professionals have walked out and how action is likely to escalate.