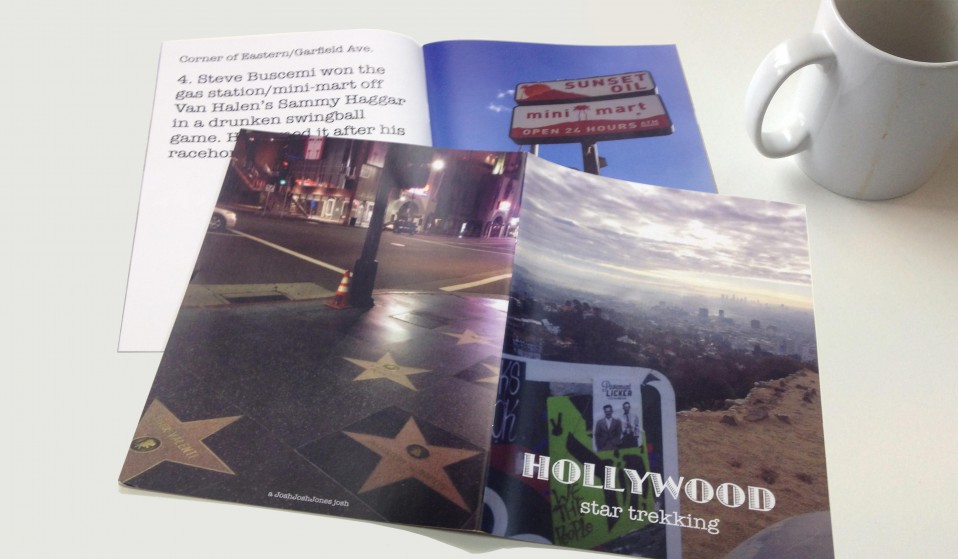 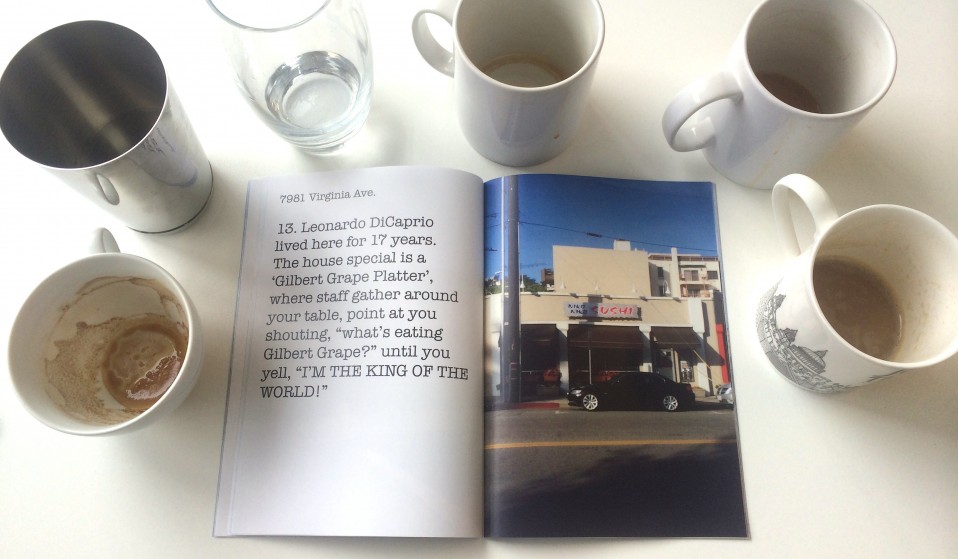 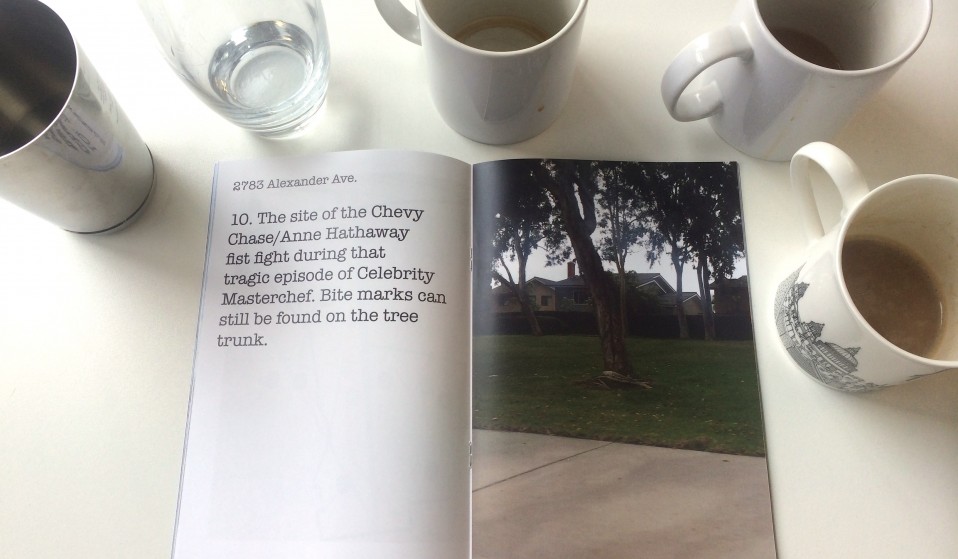 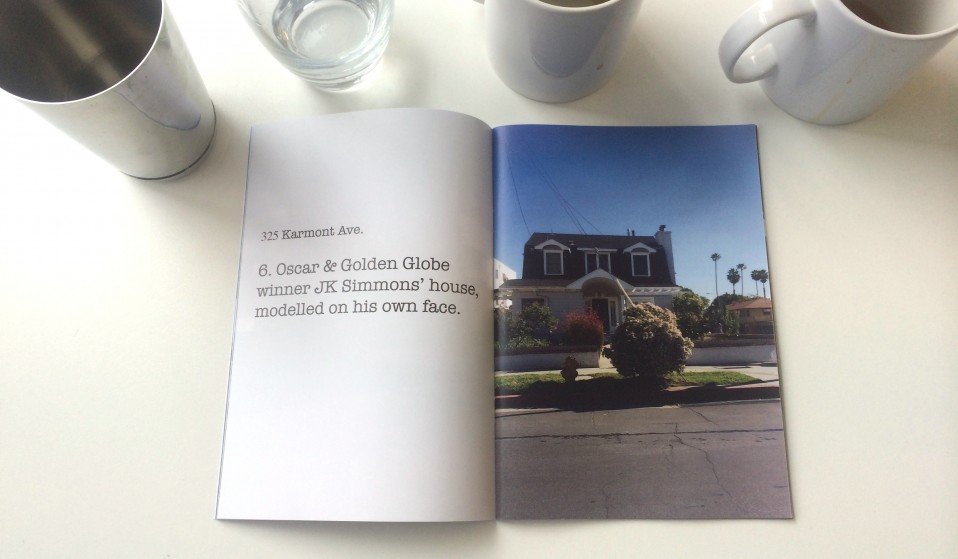 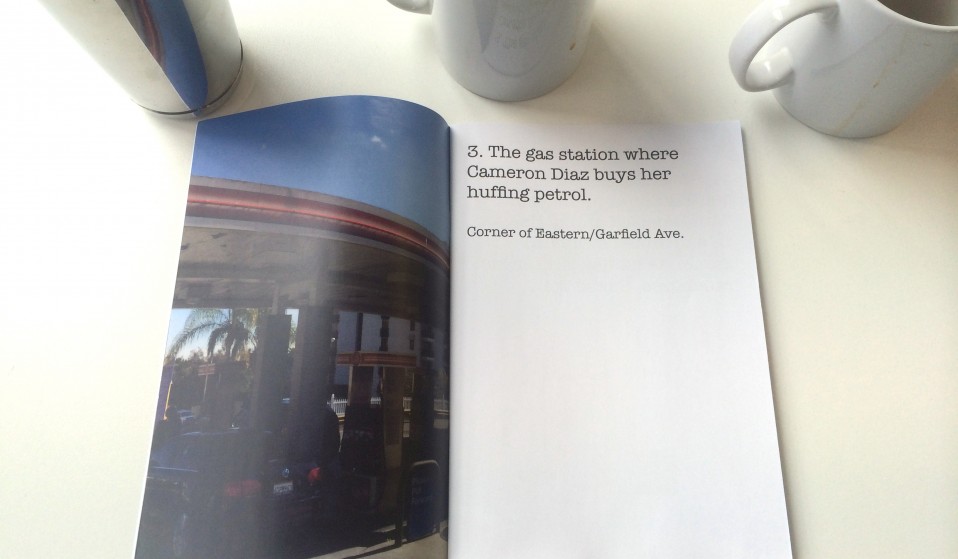 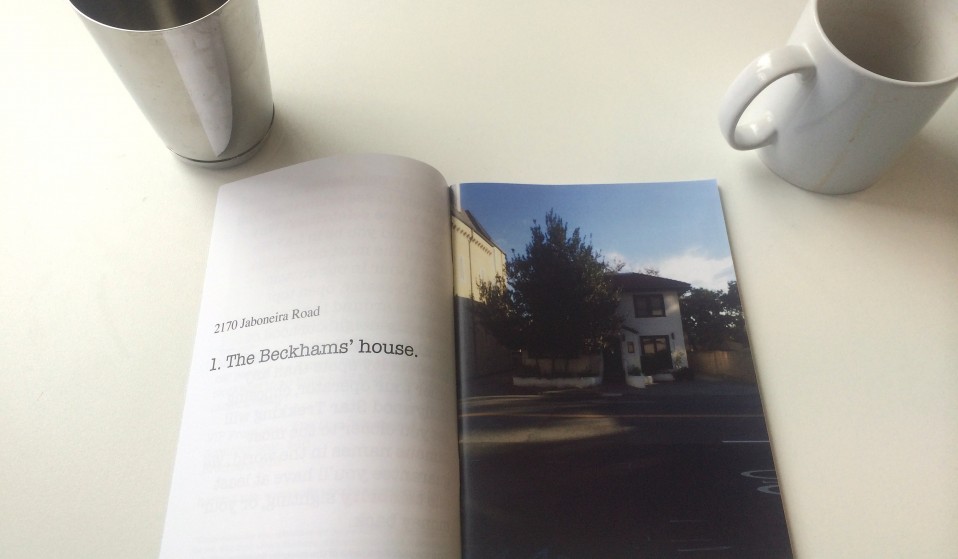 Hollywood is full of places steeped in mythology, from the “Beverly Hills Bermuda Triangle” where Howard Hawks crashed his plane in 1947 and where Bugsy Siegel was murdered a year later, to the gas station Steve Buscemi won off Van Halen’s Sammy Hagar in a drunken swingball game, or the fedora shop where Adam Sandler once auditioned for Blink-182 at the dawn of the ’90s.

In fact, only the first urban legend comes close to any shred of reality. The other two come straight from the mind of writer, zine-maker for hire, photographer and bullshitter Josh Jones. His new photo zine Hollywood Star Trekking began life when he drunkenly — and falsely — convinced an LA taxi driver that the gas station they’d just passed was where Cameron Diaz bought huffing petrol.

Where others would have sobered up and stopped being so childish, Josh set out to turn the idea into a fully-fledged project. He cruised the City of Angels, shooting banal locations and making up hilarious tall tales for each place to put together a fake celebrity-spotter’s map.

Rather than shelling out the $55 for his fictional VIP guided tour, we caught up with Josh to find out more about Hollywood Star Trekking.

When and why did you start making zines?
I started making zines with my friend James-Lee Duffy. We founded the art zine Pavement Licker back in 2004. It’s still going strong. I like to make them because there are no real rules, you get to choose the deadlines and you can put anything you like in them.

What do you like about the medium?
I like the fact that there are zines made about absolutely everything. People make zines about the most broad and the most niche subjects. There’s people who make them about Taylor Swift and then there’s people who make them about a particular piece of railway equipment or butt plugs or Manchester United or things people have said to them on the subway. I like how whatever it is, people pour their heart into it. They are called fanzines, after all. Also, blogs and YouTube channels can fuck off.

What’s Hollywood Star Trekking all about?
I was in LA making a book called CANYON with photographer Dan Wilton and he, my wife and friend Claire got very drunk indeed on martinis. We were in a cab to another bar when I convinced the taxi driver we’d just passed the gas station that Cameron Diaz buys her huffing petrol. Then I just made other things up, he seemed to enjoy my story telling so I wrote a reminder in my phone to make a zine about it when I’d sobered up the next day. I wandered about West Hollywood taking pictures of things that were banal and weird and then made up the story to go with them on the plane home. Then I found the most boring looking place in LA I could find on Google Maps (Southgate) and worked out a route for the tour to drive around.

How do you go about creating each issue and how do you chose the stories and artwork?
Well this is the first one and I have got enough pictures left over to do another one in Los Angeles, but I haven’t decided if I want to do that one or another city. I guess it would need another angle for another city because I can’t imagine anyone doing a star tour in Rotterdam… Or maybe that’s a better idea – I should be a bit more abstract. Thanks a bunch Huck, I have to go to Rotterdam now.

Have you swapped Hollywood Star Trekking for any other good zines?
Not yet, it’s only just come out but I will definitely swap it for one of my Pavement Licker on my own, in a kind of one man zine fair, sad ceremony thing.

What are your favourite zines?
Pavement Licker is the best. Closely followed by KnockBack and Gums & Tongue is pretty funny and gross and something you should definitely check out.

Linkedin
RELATED ARTICLES
OTHER ARTICLES
Proponents of personality tests argue that they’re necessary to find the best person for the job – but in practise, they’re often discriminatory.
Ireland’s national sports are modernising. At the forefront of this movement is Na Gaeil Aeracha, the country’s first ever queer GAA club.
As the cost of living crisis bites, letting go of treats to keep us going is proving difficult – but we should’t just blame ourselves for our financial worries.
A campaign seeking to prevent future injustices where there is state involvement is gaining momentum, with Labour recently pledging its support.
Through stills, anecdotes and film criticism, a new book examines the portrayal of women’s destructive emotions, reframing it as a challenge to patriarchal structures.
Layna, Maysa and Amaya are three siblings looking to disrupt narratives around the sport. In doing so, they’re hoping to inspire a new generation of skateboarders.