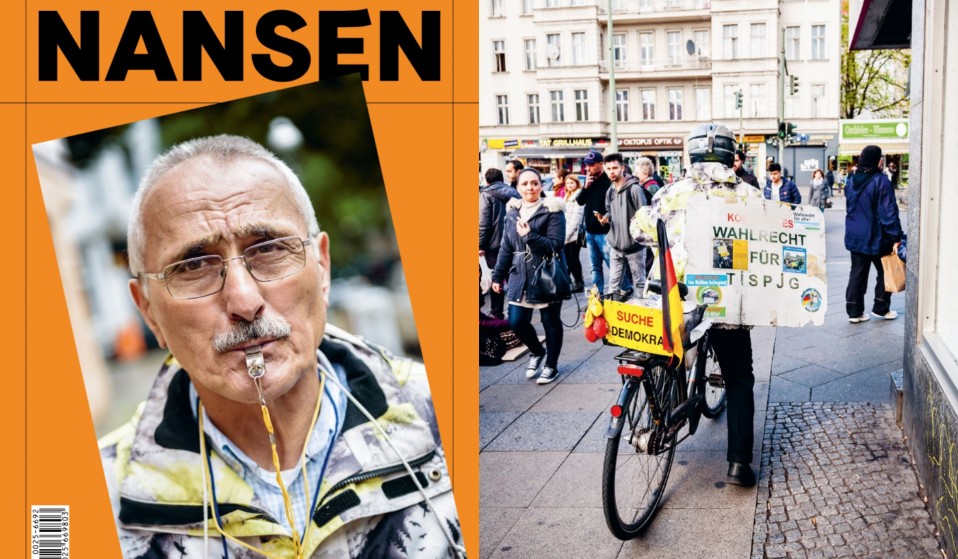 With the refugee crisis still affecting millions of lives globally, there’s no doubt migration is one of the most pressing issues of recent years. Yet NANSEN – a magazine about migrants, written largely by migrants – offers a unique perspective in migration reporting by dedicating each issue to a single one, telling the individual stories of one person at a time.

Through a series of interviews, illustration and photography, the Berlin-based publication, which launched last week, explores each individual migrant’s experience and paints a picture of their wider community, turning statistics into life stories of real people. Here, we speak to Vanessa Ellingham, the magazine’s editor, to find out more why she set up the magazine and where she hopes it will go in future.

How was NANSEN founded?
I first had the idea for a magazine about migration about four years ago, having just moved to Berlin. I’d already tried out being a migrant in Denmark, so this was my second new home.

The “refugee crisis” brought a lot of attention to the migration topic and, while I’d already been interested for a couple of years, suddenly a lot of other people were too. And that’s great news – I think we really need to be talking more about how to make migration work, because it’s always been part of human life on earth, and it certainly isn’t going to stop anytime soon. We didn’t start as an answer to the migration debate, or the “crisis”, but as a way to build community and solidarity between migrants of all kinds. 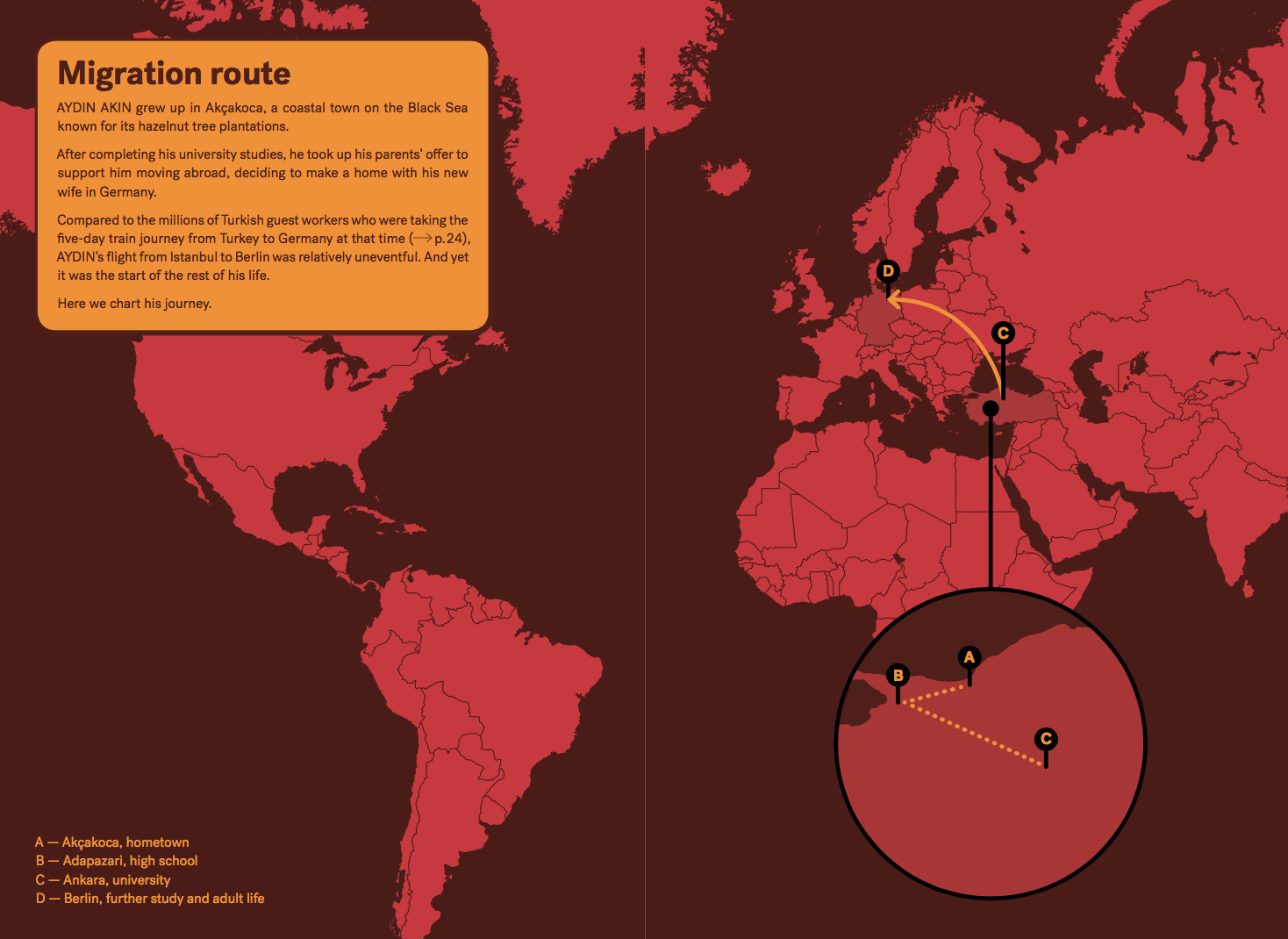 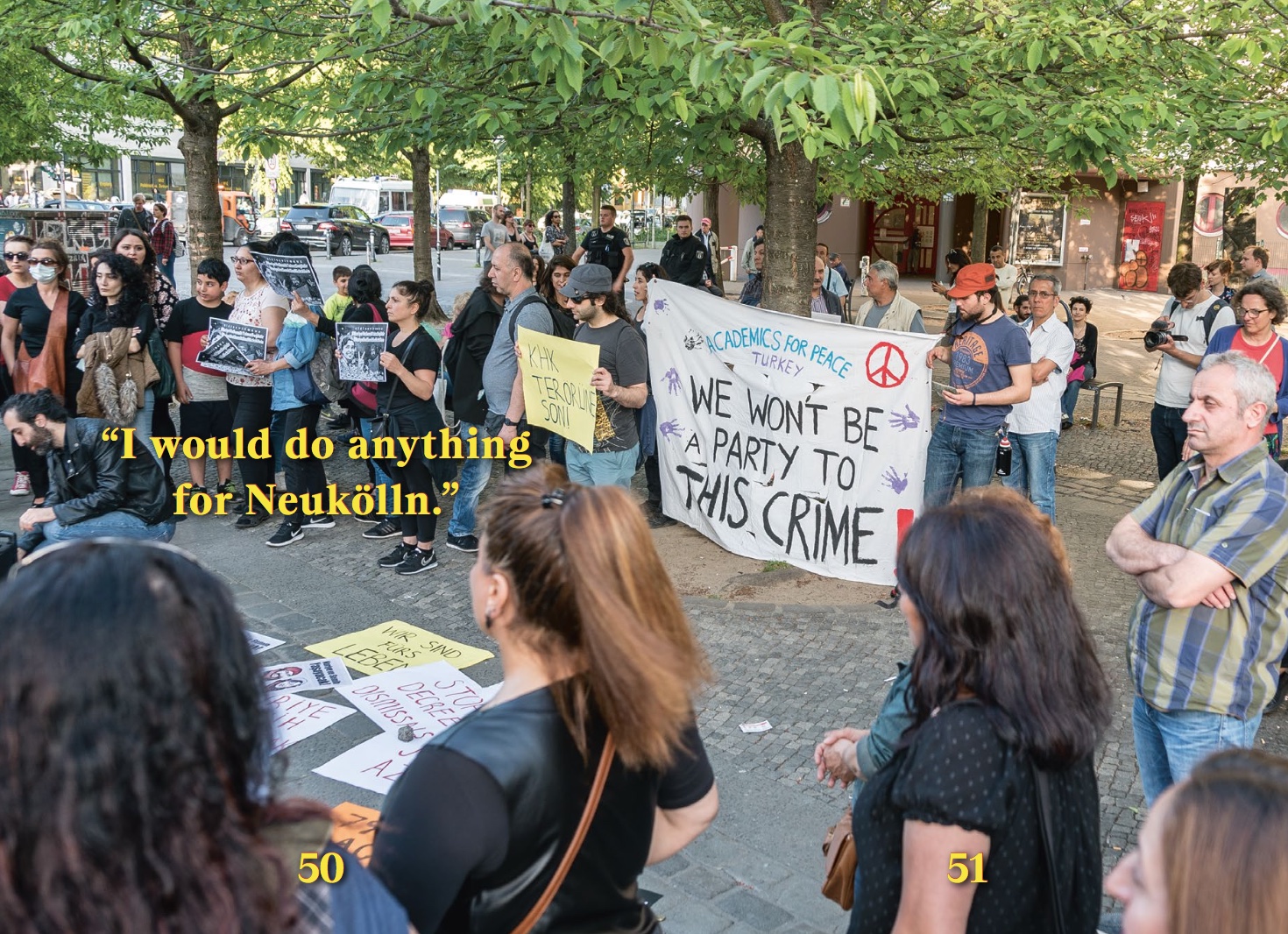 Why did you decide to focus on only one migrant per issue?
I knew I wanted to make a magazine that focused on the personal and so I think a combination of wanting to have a refined concept, something personal where we could go deep, and also something that would be doable as a part-time project, led me to settle on just focusing on one migrant per issue.

There was also the budget aspect. It’s really important to me that everyone who works on this magazine gets paid for their work, which I understand is not so common for small-budget independent magazines. I know how frustrating it is as a creative to be asked to work for free and most of our contributors are migrants themselves, all at varying stages of setting themselves up in Berlin. The exploitation of migrant labour is a huge issue and I wasn’t going to be part of that. So coming up with a concept that was also feasible with my small budget was part of it, too. Focusing on one migrant per issue allows us to tick all those boxes. 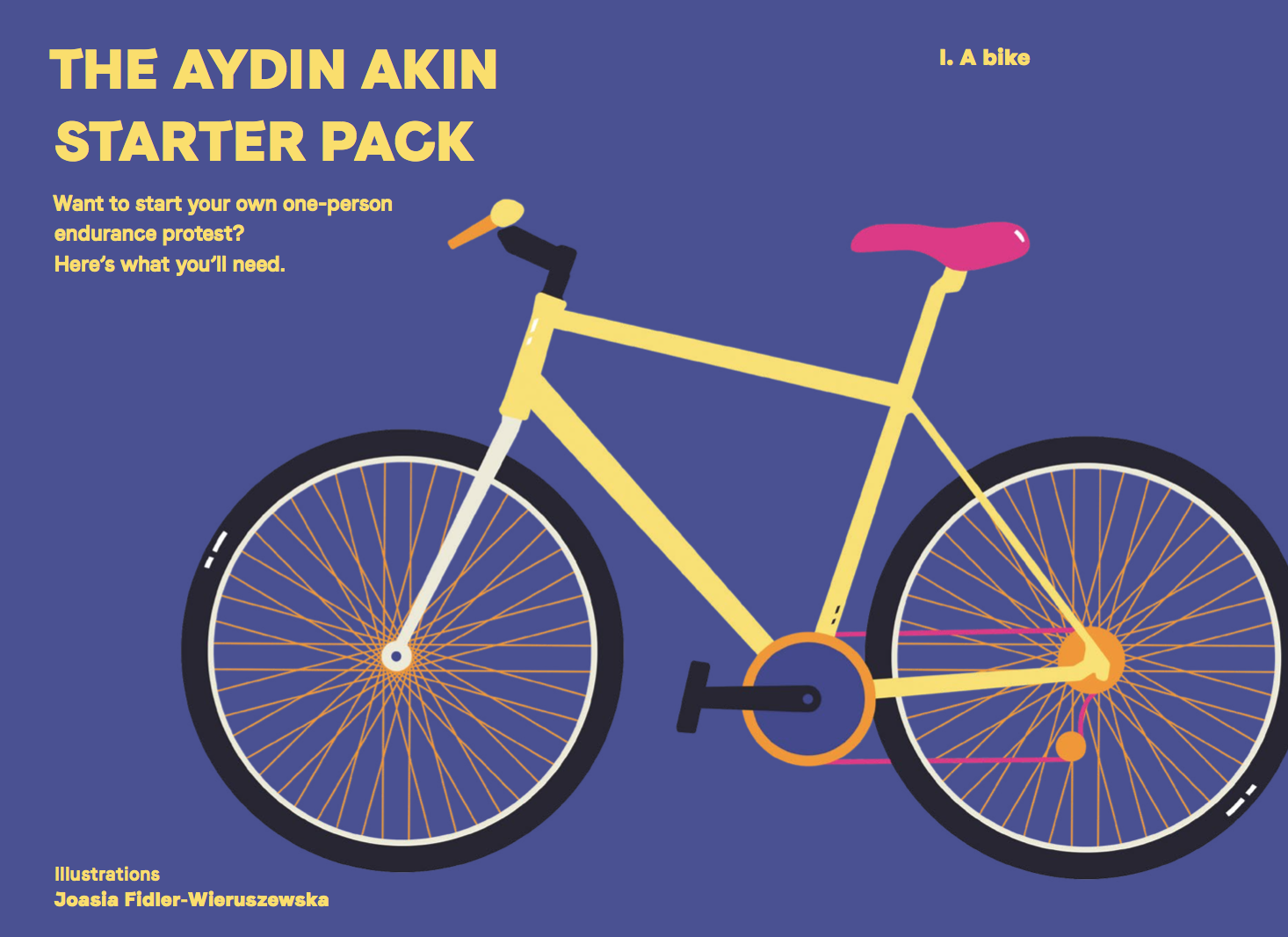 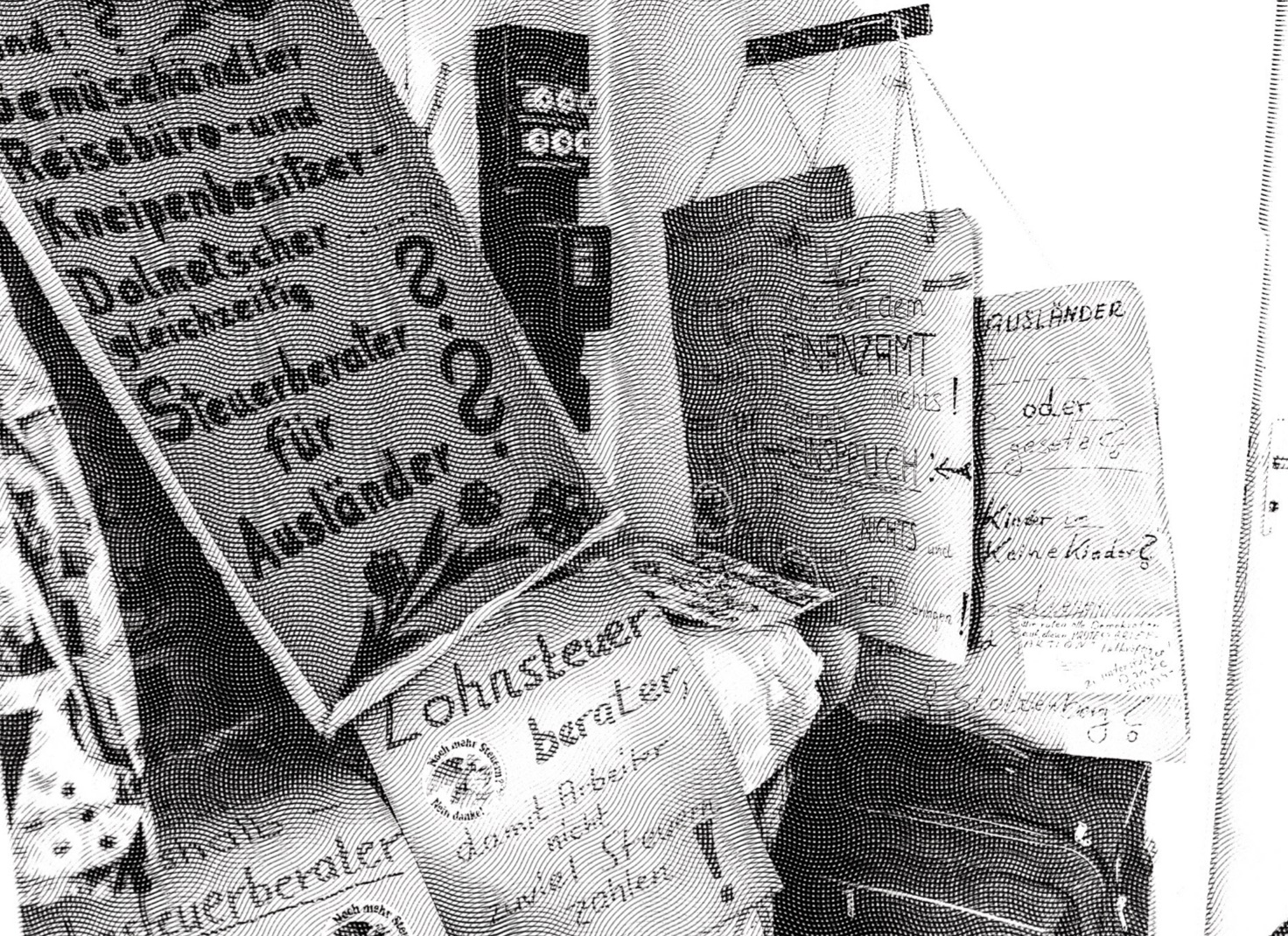 The first issue focuses on 78-year-old cyclist and protester Aydin Akin – what made you decide to focus on him?
Aydin Akin cycles past my Berlin apartment every morning and evening, and he’s a total distraction. It’s clear that he’s protesting – he wears these big protest posters, he’s got two megaphones that blast a chant and the football anthem “Olé, Olé, Olé”, and he blows a whistle while he rides – but it’s not necessarily clear what he’s protesting about. I used to find him pretty annoying, until I heard that he’s demonstrating about migrant rights and he’s been performing his protest every day for 12 years.

Aydin has really valuable insight into how Germany and Europe could do a better job of integrating newcomers, which is something he’s built up as a migrant himself – Aydin’s Turkish-German and he’s lived in Germany for 49 years – but also as a long-time advocate for his community. Aydin says that the anger and violence we see from people who feel excluded from the societies they live in could be reduced by providing better ways to help newcomers settle in, and he has some really good suggestions for how to make that happen. It’s valuable insight whether you live in Berlin, Germany or somewhere else. Aydin’s also someone who’s been a migrant for nearly half a century. I knew that I wanted to hear what that’s been like, and other migrants and people considering making a move probably would, too. 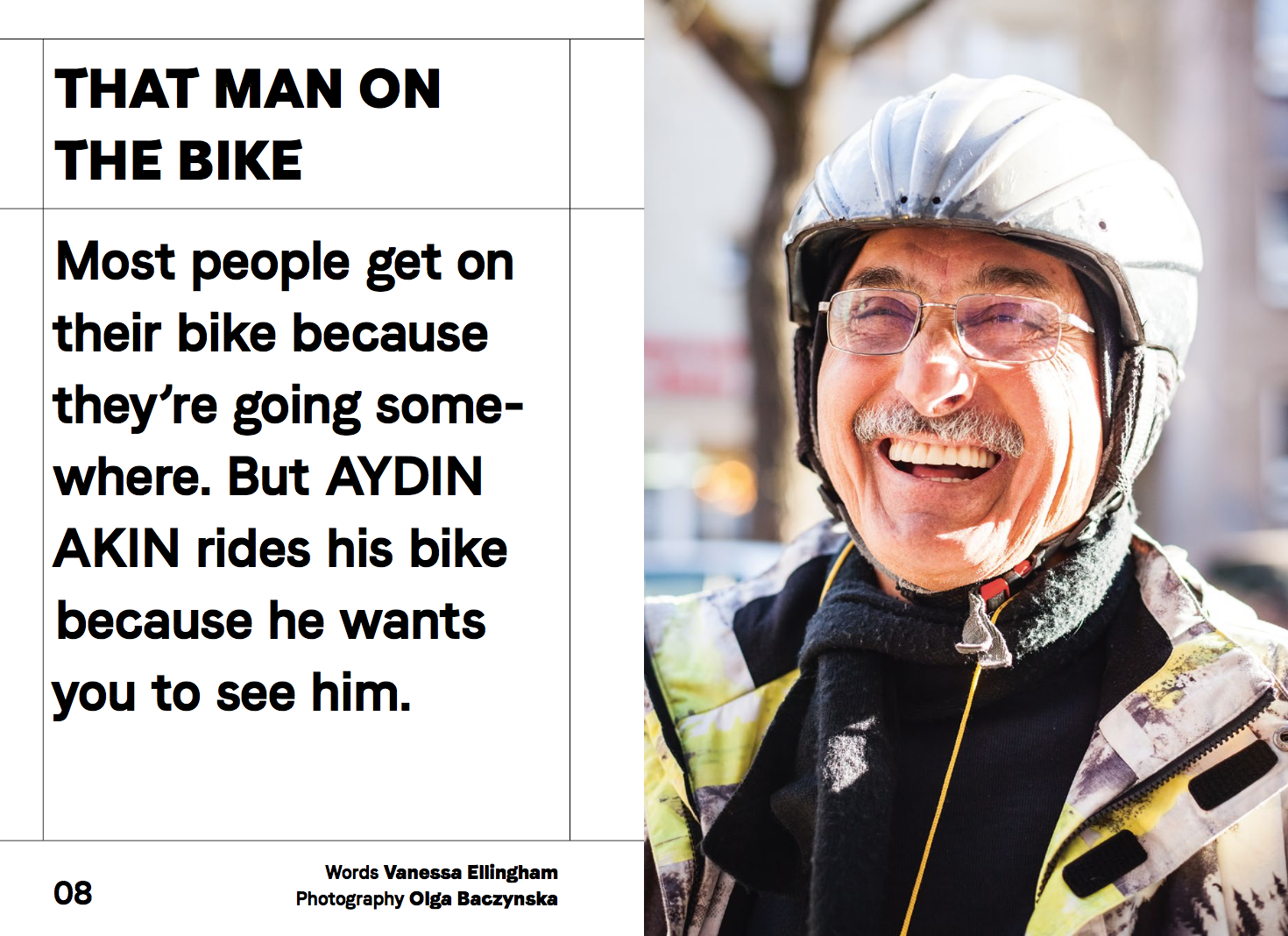 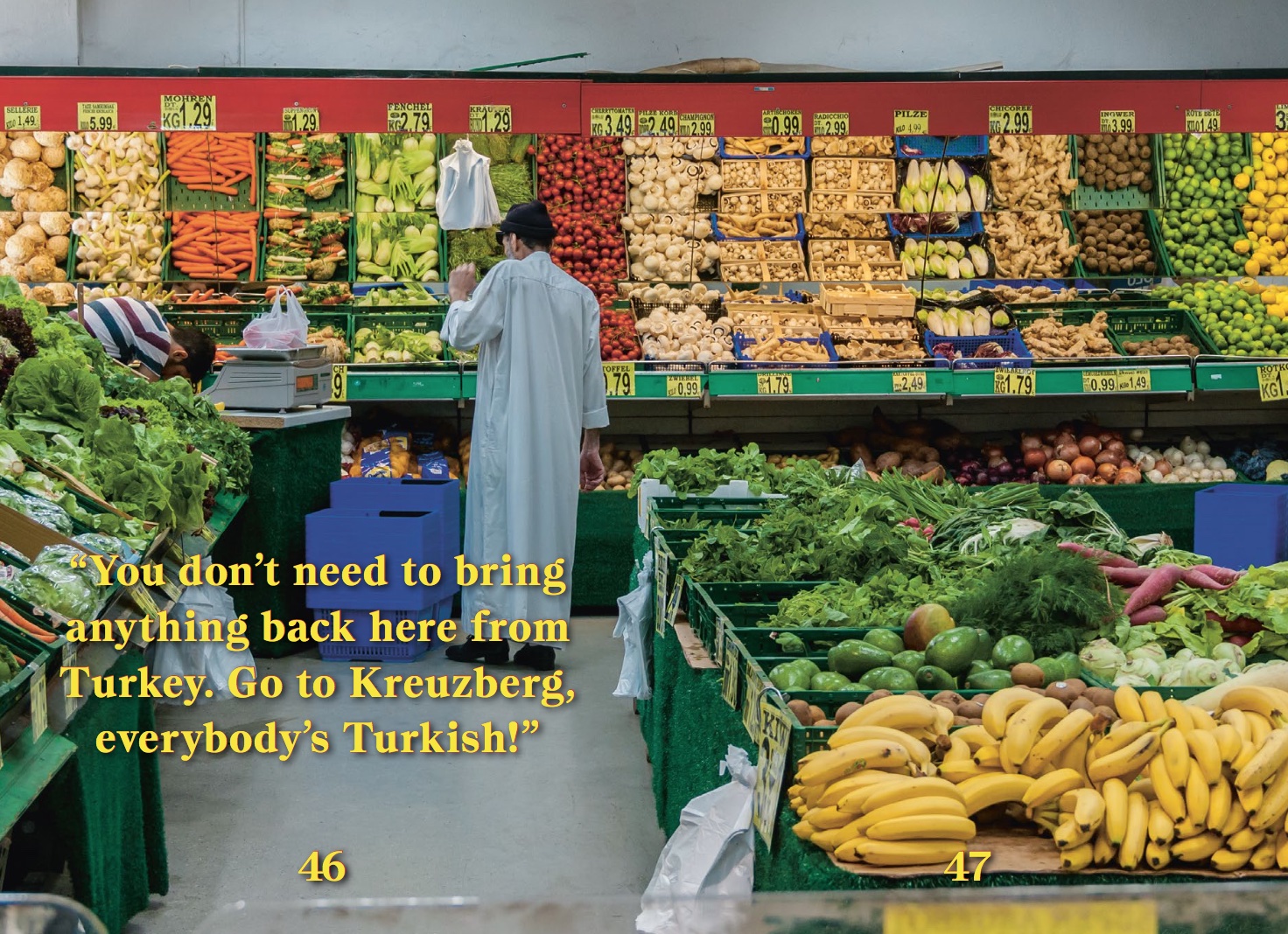 What other publications or projects are doing worthwhile things in helping to give a voice to migrants and their communities?
We’re not the only independent magazine about migration. Last year Migrant Journal was launched. It’s a magazine that looks at all kinds of migration, from humans to information to animals and plants and I think while we have a similar message about the permanence and ubiquity of migration, they go about it in a totally different way. Theirs is also a very beautiful magazine, so we’re in good company.

What are your future plans for the magazine?
We’re looking forward to introducing our readers to migrants from everywhere, living everywhere else in future issues of our magazine. We have a pretty fantastic list of future subjects, but we’re also open to nominations.

Linkedin
RELATED ARTICLES
OTHER ARTICLES
Hundreds gathered together to protest the policing bill by making as much of a racket as possible.
From Brooklyn gang members, to Welsh miners and the residents of East Harlem, Bruce Davidson used his camera to shine a light on the most marginalised.
The internet furore surrounding a certain NY-based furniture designer should make us question whether condemning people in the harshest possible terms harms more than it helps.
Those set to be impacted by the governments ’undemocratic’ bill explain why it risks silencing them.
A new book traces the legislation’s tumultuous history and the lasting impact its had on LGBTQ+ activism today.
The musician, DJ and founder of Monika Enterprise reflects on a career defined by revolution and rule-breaking.