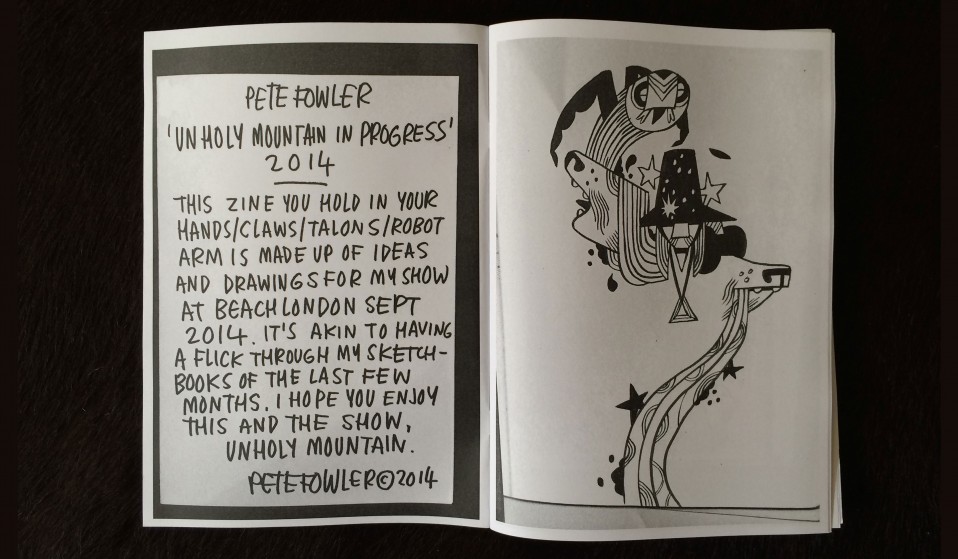 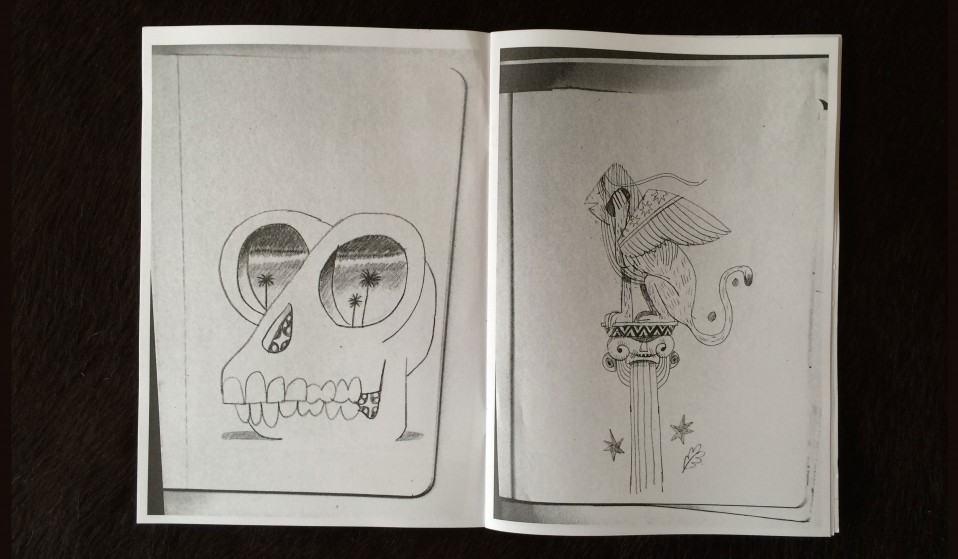 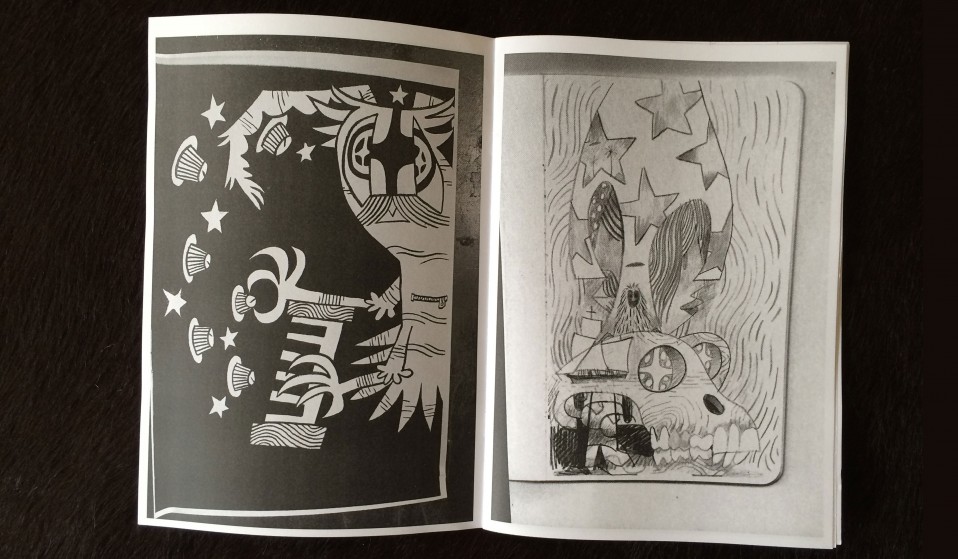 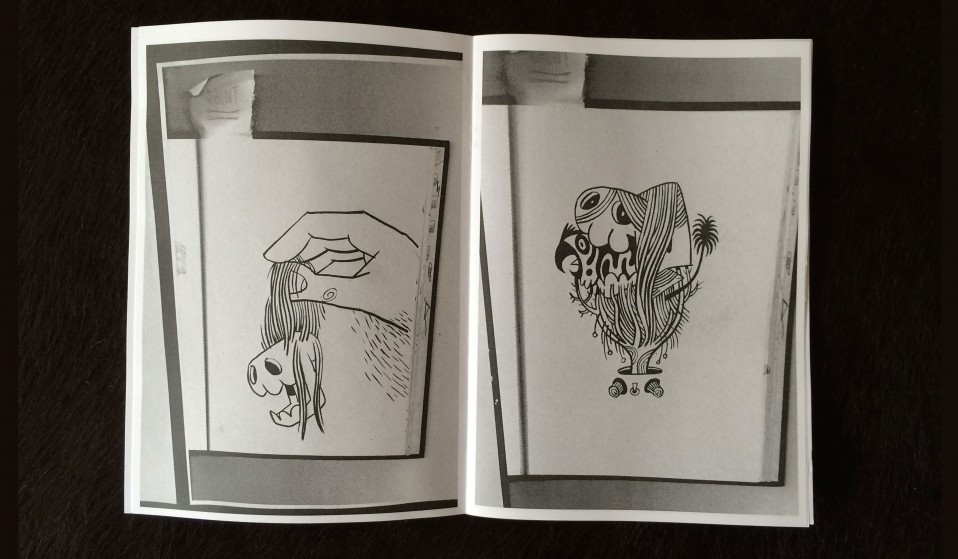 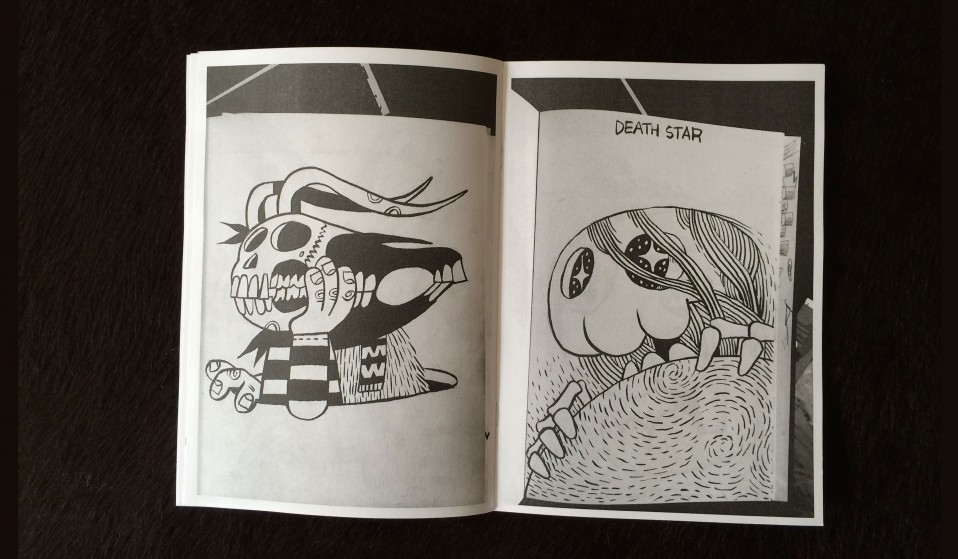 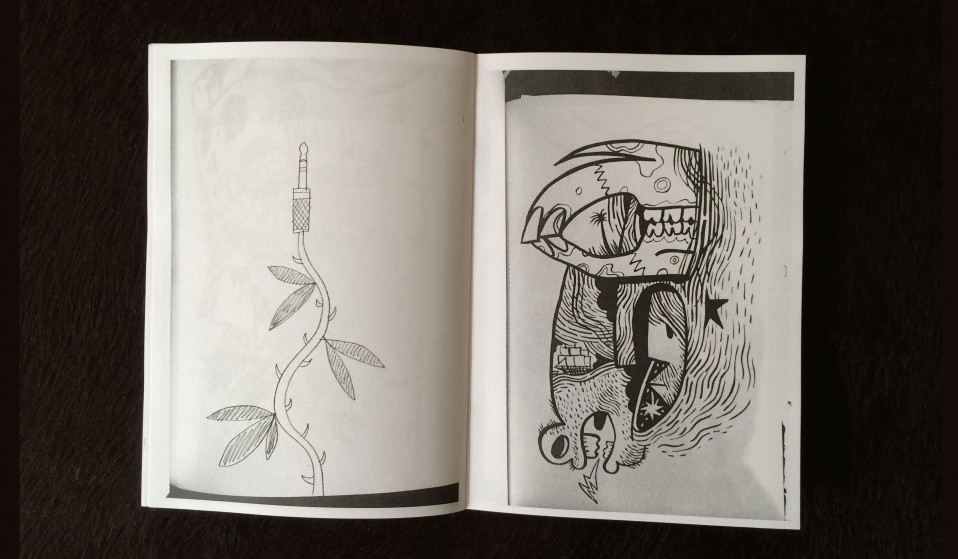 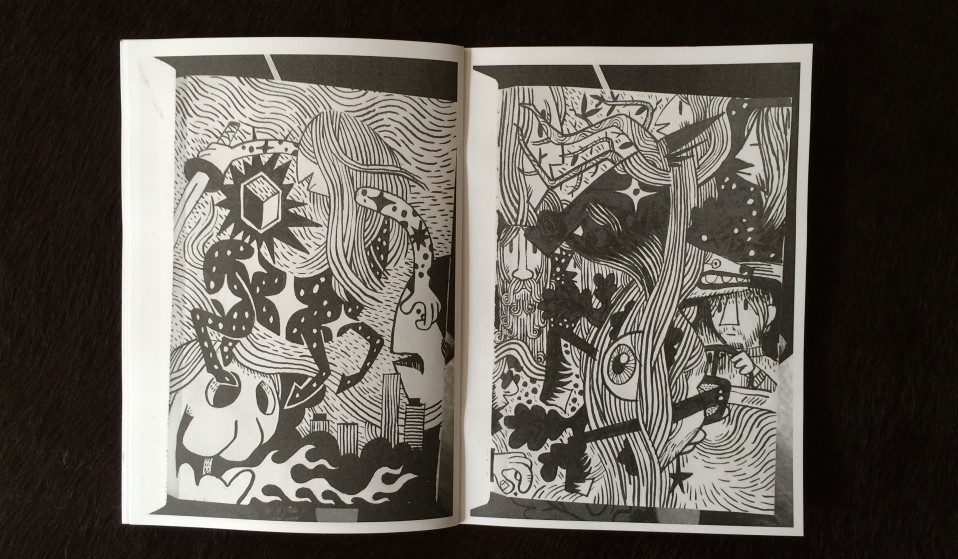 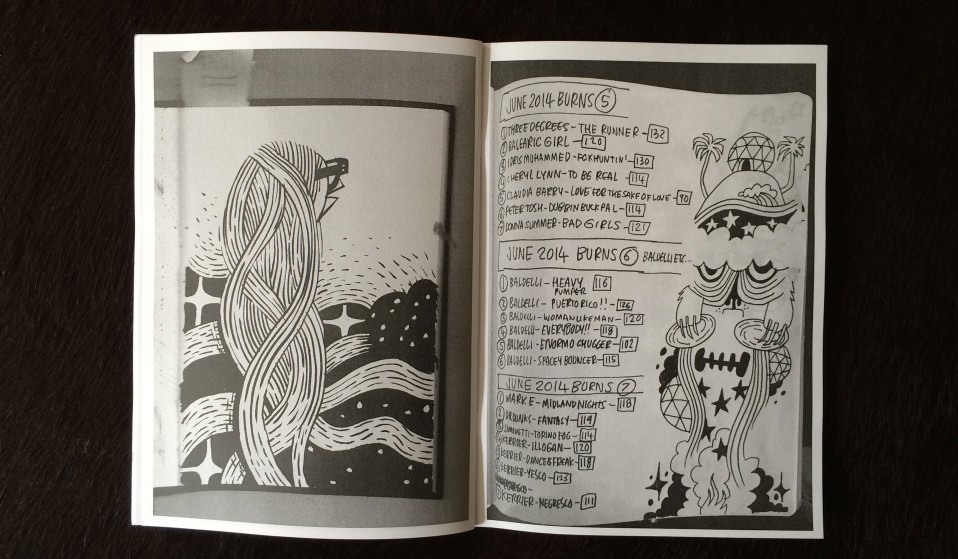 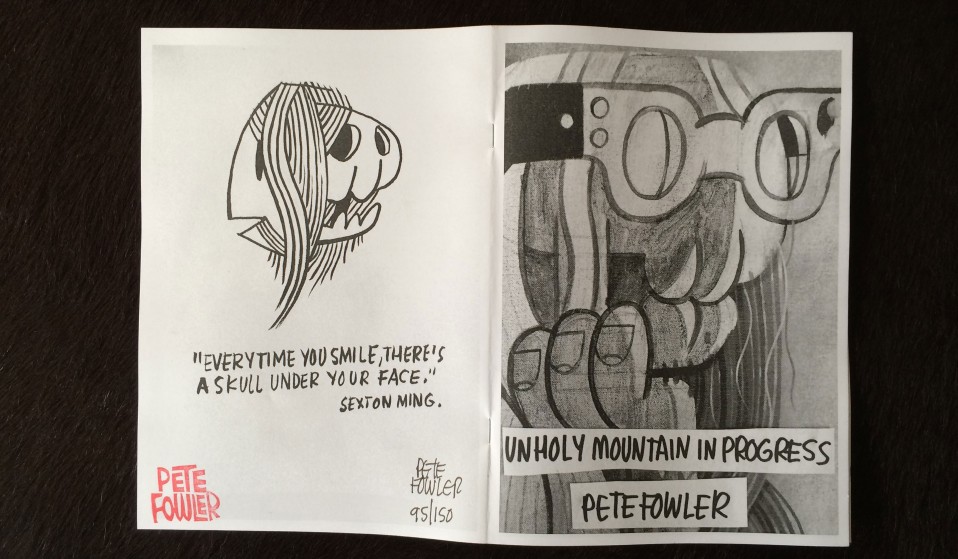 Artist and illustrator Pete Fowler pencils, prints and photocopies a new zine to accompany his solo show at Beach London.

Artist and illustrator Pete Fowler pencils, prints and photocopies a new zine to accompany his solo show at Beach London.

Pete Fowler aka The Monsterist has brought his art skills to everything from toys to t-shirts, album covers to advertising, but now he’s going back to his roots with a new zine, Unholy Mountain In Progress.

The photocopy zine is a pencil and print out-takes and b-sides meets ‘making of’ for his latest solo exhibition of paintings.

It connects Pete’s present to his early days putting together DIY zines with his skating friends in Cardiff back in the day.

Pete is now based in London and his new show The Unholy Mountain kicks off on Friday September 5, just round the corner from his Brick Lane studio, at Beach London.

When and why did you start making zines?
I made my first zine when I was 18 and living in Cardiff (I’m now 45). It was called Yob Concrete and was loosely skateboard themed, with the odd recipe amongst whatever we wanted to put in there. I did it with a good friend Rob Parsonson who grew up skating around Canvey Island and we starting to skate together while he was studying in Cardiff, my home town. He’s now making a concrete bowl in his garden in north Wales.

We both loved comics and the cheaper, weirder side of print, along with a zine from Bristol called Skate Muties From the 5th Dimension. A hilarious thing it was, very snotty and generally taking the piss. That inspired us to do it ourselves, which I think is where photocopied zines come in. Cheap, quick and direct.

Years later, after graduating from a fine art degree in Falmouth, I started a comic with two friends, Rob Ramsden and Tom Barwick called Slouch which ran for three issues. Again, we did it ourselves and had a lot of fun. I’ve not really made a zine since then so it was well overdue!

What do you like about the medium?
As I touched on above, they are really cheap to print and easy to distribute and sell. I really like the limitations of the black and white photocopy and the unique results it gives. There’s nothing that quite looks like a photocopy, even the oldest, crappiest prints have something really nice about them. It flattens everything out but at the same time has a great texture to it, especially if you copy and copy then use that as the master. It produces a type of analog degeneration that I’ve not seen a photoshop plug-in able to recreate.

What’s Unholy Mountain In Progress all about?
The new zine is 32 pages long, with 150 numbered copies that contain various drawings and ideas for my forthcoming show at Beach London on the fifth of September. It’s like a peek into my sketchbook and the thought process behind creating a finished piece of artwork. Some ideas didn’t make it to the show so it’s almost like an expanded version of the show.

There’s also a soundtrack of sorts listed on the inside back cover. A page from my sketchbook where I was copying vinyl records to CD then noting the songs in my book to print out later and add to my DJ wallet.

How did you decide to present the images together in this way?
Well, the contents of the zine are all drawings. Either in pencil or brush pen, that I’d copied using my printer/scanner then pinned to the wall of my studio to look at. From there I’d decide which ones I was going to base the paintings on. When I had the idea to make the zine, I thought I’d shoot the images of the print-outs and use those.

I really like the idea of the master image being a print, that’s then been shot, digitally converted then photocopied. I think the breakdown and the quality of the image is a really nice mix of analog and digital and I spent very little time on the general layout, aside from the running order of each page. My sketchbooks can be quite random from page to page and I wanted to give a taste of that in terms of the image selection.

What do you do for a living and how does zinemaking fit into your life?
I’m an artist/illustrator and have been working in London since the mid 90s on a wide range of very diverse projects, from working with bands, advertising, publishing, animation and film, painting, printmaking, music and more.

I wanted to have something for sale at the show, alongside the paintings so the zine idea came to mind. Since making this I’m going to produce them regularly and have a few ideas brewing at the moment. Although I think they are all going to be derived from the many sketchbooks I’ve been keeping over years. There could be a few volumes!

Have you swapped Unholy Mountain… for any other good zines?
Not yet although that would be great. I do like swapping artwork at times so get in touch!

What are your favourite zines?
I’m really out of the scene to be honest! I’ve not really seen much for a long time but now I’m getting back into the medium again I’ll be looking out for what’s interesting out there.

Linkedin
RELATED ARTICLES
OTHER ARTICLES
The author discusses her new memoir, which offers a sobering reflection on the racism and otherness she’s experienced along with a joyful celebration of her culinary heritage.
Steel City is often overlooked when it comes to the country's cultural radar despite its role in shaping electronic music.
To mark the premiere of his new documentary on surfing giant Gerry Lopez, the filmmaker and former pro skateboarder sits down to share his unique brand of wisdom.
As the Criminal Bar Association enters its fifth week of action, criminal barrister Russel Fraser explains why the legal professionals have walked out and how action is likely to escalate.
Following the release of his latest album, the rapper talks about finding a new approach to songwriting, attitudes to poverty, and why his music is more than a political statement.
Protestors gathered outside Downing Street following the latest atrocities committed by Israel against Palestinians living in the besieged strip.