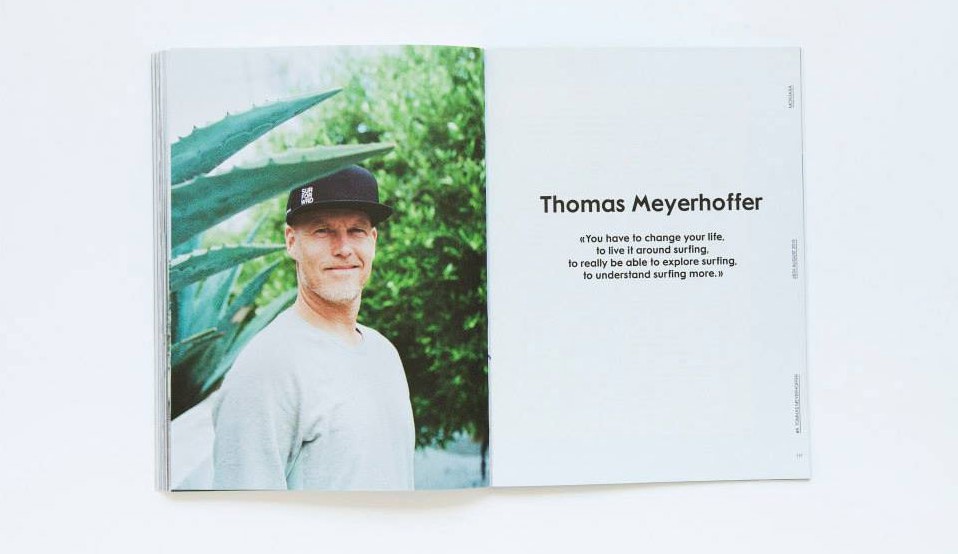 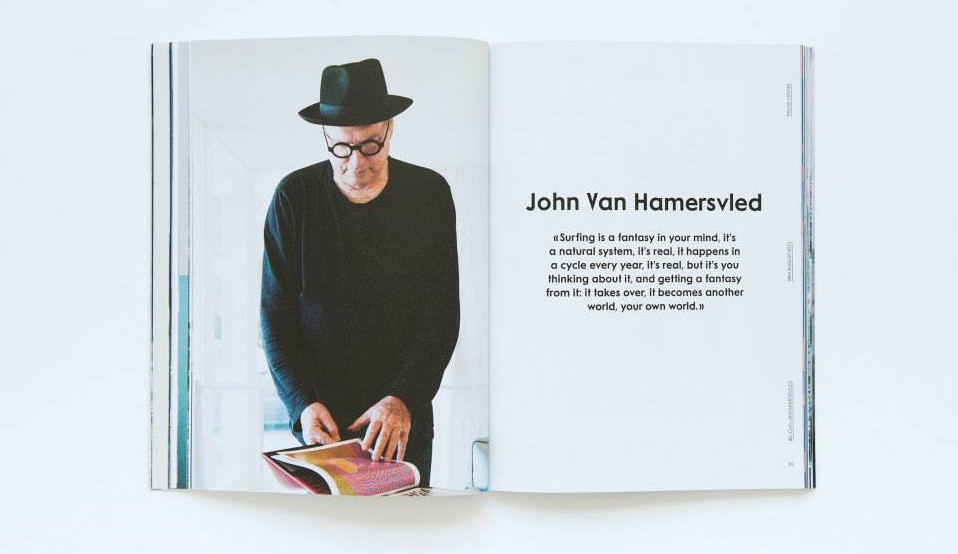 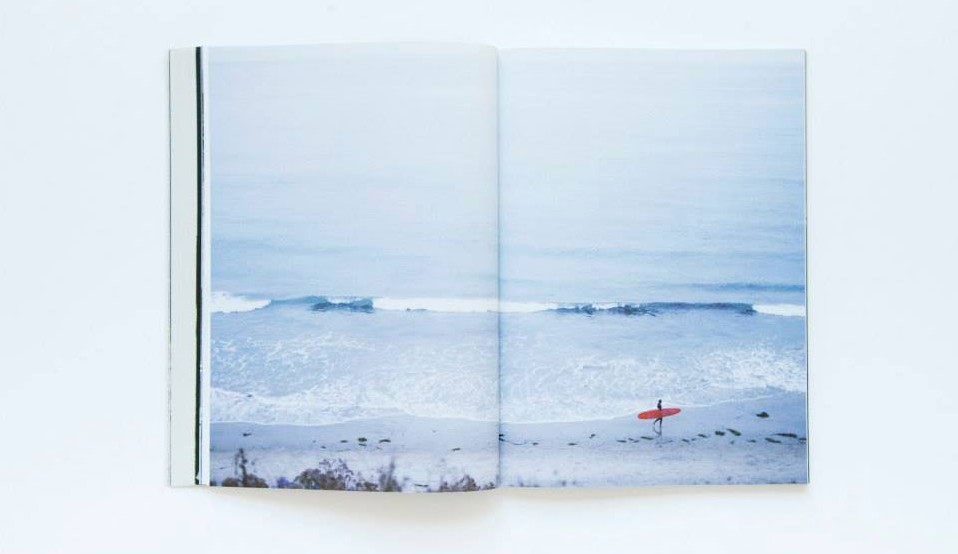 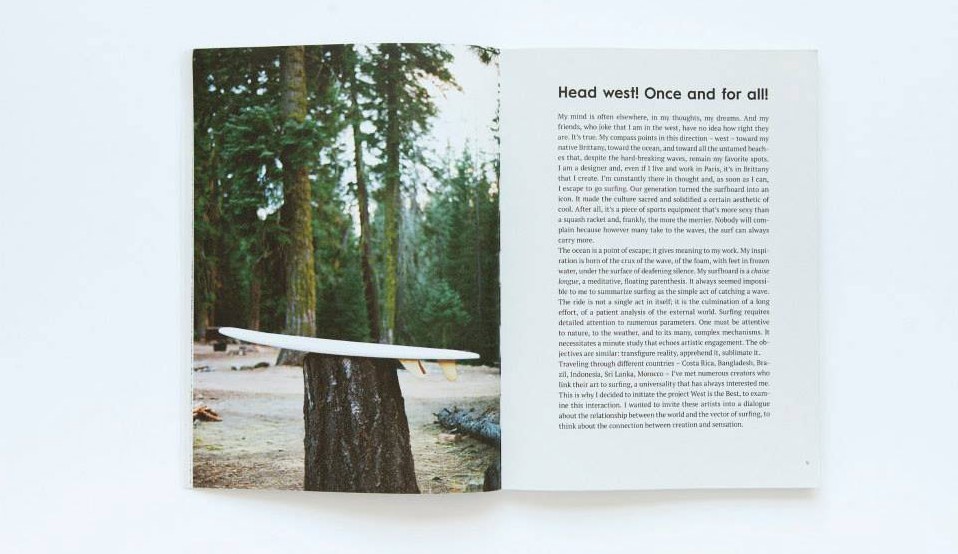 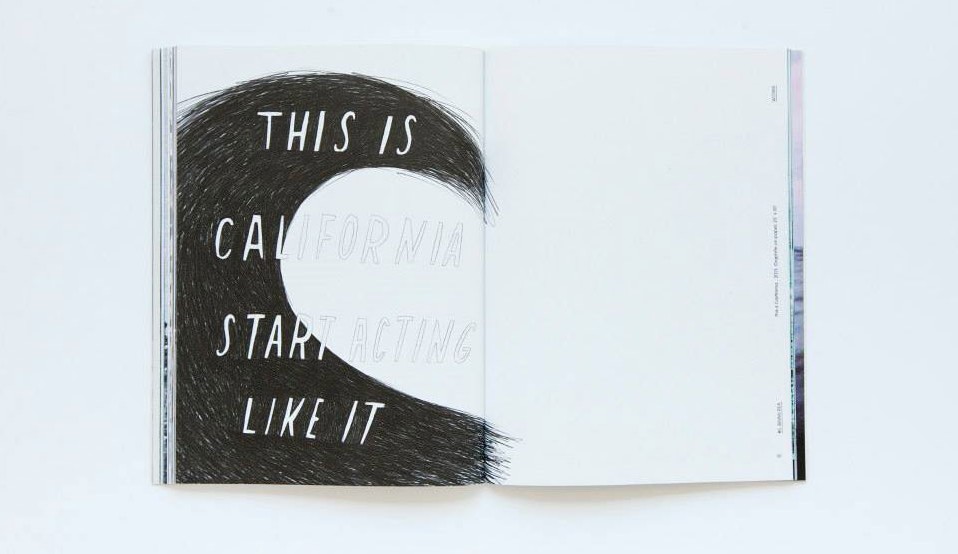 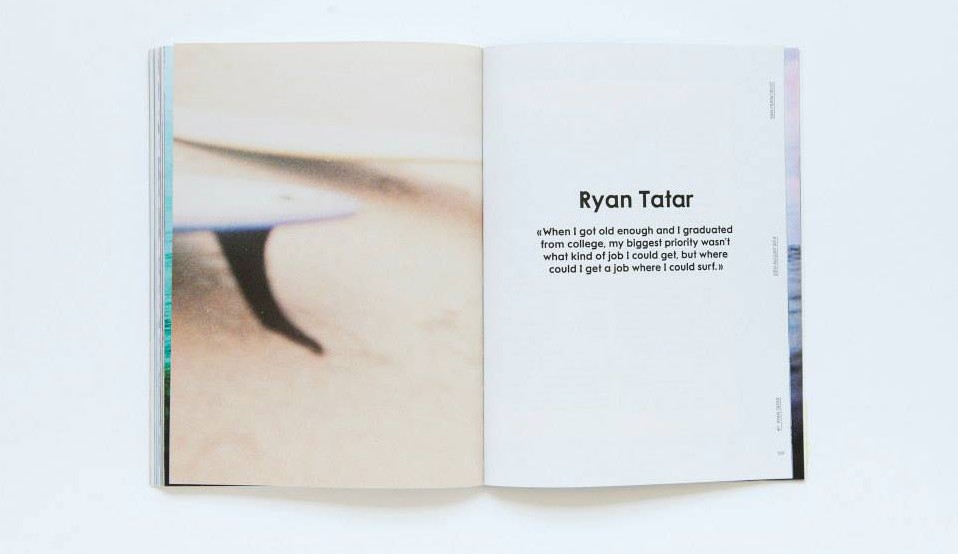 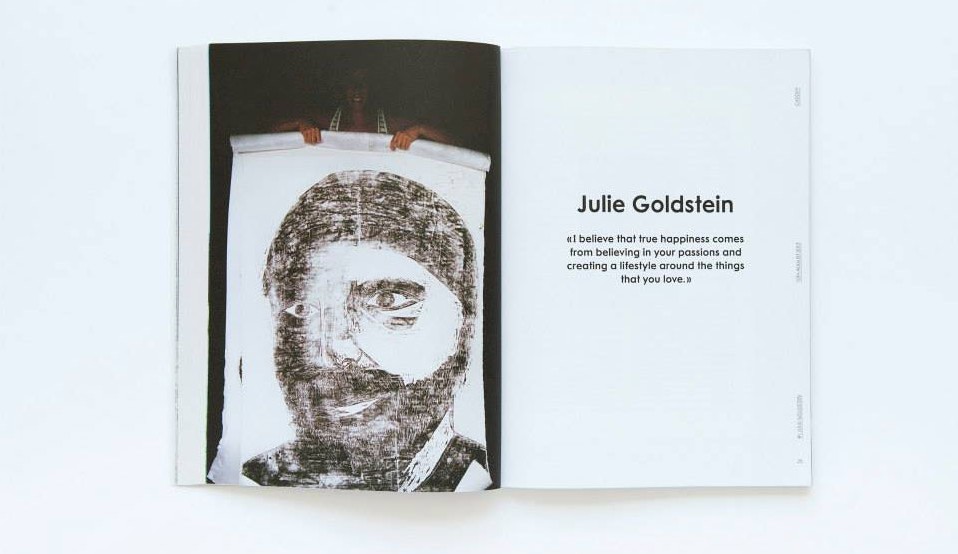 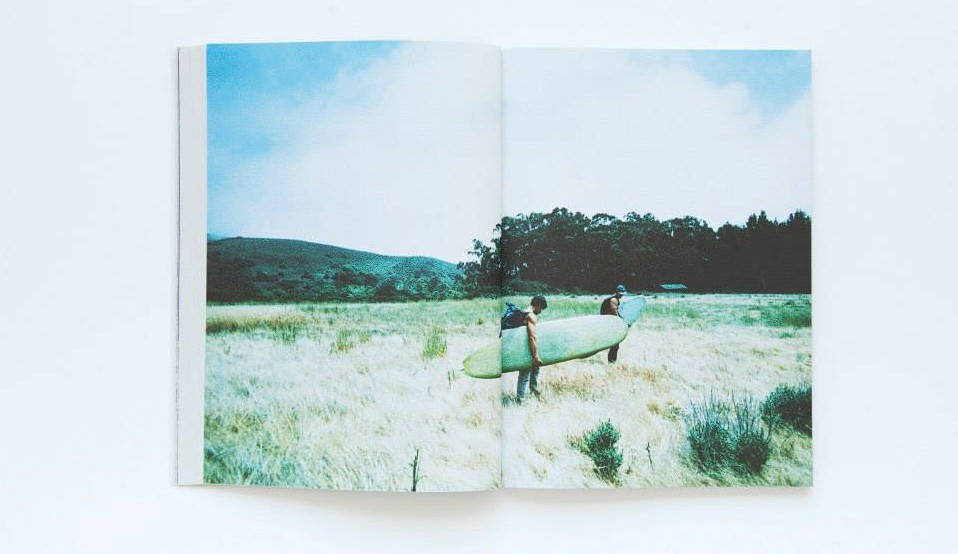 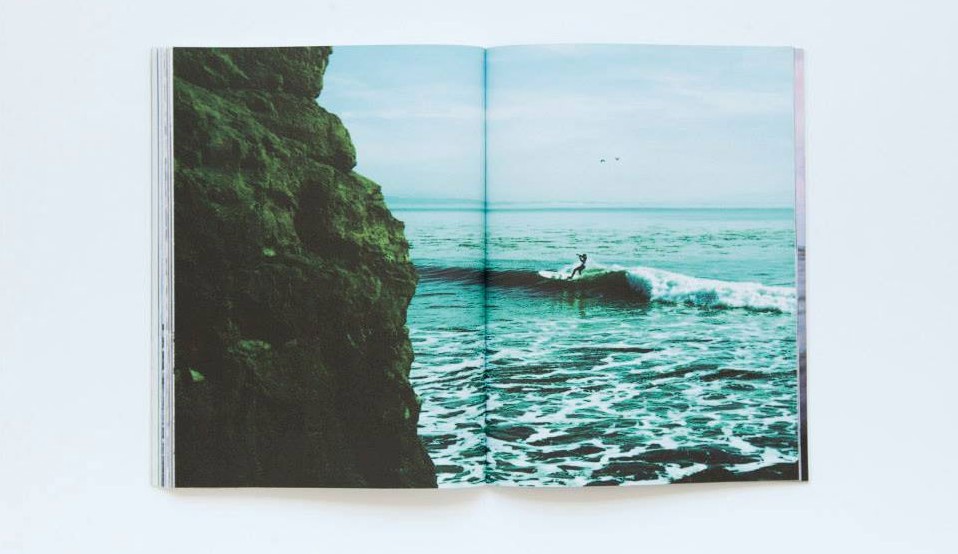 The objectives of the artist and the surfer are very similar. Designer Joran Briand has created a book exploring why.

The objectives of the artist and the surfer are very similar. Designer Joran Briand has created a book exploring why.

French designer Joran Briand is endlessly inspired by the sea. His recent book West is the Best explores the relationships artist-surfers have with the sea.

What exactly is West is Best?
WITB is a manifesto on the relationship between art and surfing. In it, eight artists share their vision of the ocean, their relationship with the elements, and what the immersion into and the contact with the waves bring everyday to their creations.

Why did you start it?
It always seemed impossible to me to summarise surfing as the simple act of catching a wave. The ride is not a single act in itself; it is the culmination of a long effort, of a patient analysis of the external world. Surfing requires detailed attention to numerous parameters. One must be attentive to nature, to the weather, and to its many, complex mechanisms. It necessitates a minute study that echoes artistic engagement. The objectives are similar: transfigure reality, apprehend it, sublimate it.

How do you hope it will have an impact?
I think people are increasingly attentive to their wellbeing. West is the Best shows the way!

Who’s involved in WITB and what does everyone do?
The starting point for the project had to be California because its philosophy is a testimony to the fusion between surf culture and the creative environment. All I had to do was go there. So a couple of summers ago I boarded a plane at Charles de Gaulle airport and headed to San Diego. A couple of days later I was joined by my friend Marie Doiteau, surfer and community manager, and we started our road trip with a spell at Julie Goldstein’s in Cardiff-by-the-Sea, where the illustrator with a passion for the sea starts every day with a session in the waves. Then, we met up with artist Alex Weinstein in Gardena, and legendary designer John van Hamersveld in his endless summer of Palos Verdes; we saw Sean Knibb’s gardens and brutalist furniture in Venice, enjoyed the hijinks of image-maker and Eagle Rock beach lover Brian Rea; we were impressed by Tom Stewart’s business cool, amazed by Ryan Tatar’s instant photographs of San Francisco and by Thomas Meyerhoffer’s designs.

What have been the challenges in bringing WITB to life?
The project was realised, step by step, over two years. It was built from encounters to encounters. American people are very friendly, very open and very helpful. It was very easy to go to meet Californian artists. They opened their studio with kindness and pleasure. The hardest was the return to France to find a publisher and a budget for print the book.

What have been the major inspirations?
My mind is often somewhere else, wandering in my thoughts, in my dreams. And my friends who tease me about it saying I’m such a ‘west head’ are not far off the mark. It is true, my compass always points in that direction – toward Brittany, where I was born, towards the ocean, with those wild beaches, still my favourite spots even though the waves there are often messy. I am a designer and, despite working in Paris, it is in Brittany that I truly create. I’m always there in my thoughts, and every occasion I get I run away there for a surfing session.

The surfboard is an icon of our times. Surf culture has been sacralised, becoming a certain aesthetic of cool. But to many people, me included, surfing brings much more than that. The ocean is a vanishing point; it brings depth to my work. More often than not, my inspiration comes to life at the base of the waves, in the foam, feet in icy water, sliding on the surface of the deafening silence. My surfboard is a deckchair, a floating interlude conducive to meditation. I never believed you could reduce surfing to the mere act of riding a wave. Having travelled to various countries — Costa Rica, Bangladesh, Brazil, Indonesia, Sri Lanka, Morocco – I met many creative people linking their art to the practice of surfing. This common trait always fascinated me. That is the reason I started the West is Best project and conducted interviews focusing on that interaction. I wanted to create a dialogue about the particular relationship to the world channelled by surfing.

What’s the future for WITB?
I wish to make a film reportage of 52 minutes and I would like to do a European version. My idea would be to meet one iconic artist/surfer for each country – one Portuguese, one Spanish, one French, one Irish, one English, one German (there is a static wave in Munich), and one Italian – and spend one to two weeks with them to try and understand how the European surf community. Perhaps the European west coast has no reason to envy California!

You can find out more about West is the Best and purchase the book on the website.

Linkedin
RELATED ARTICLES
OTHER ARTICLES
With the virus now a global health emergency, we must take steps to fight misinformation and demand a swift UK-wide vaccine roll out, writes Phil Samba.
A series of photos by the late Jerry Dantzic taken in 1957 show a tender side to the iconic Jazz musician.
Students are being left to languish in unsafe housing, in some cases leading to serious health complications.
Last week, Tower Hamlets council removed its nudity-restricting licensing conditions in a huge win for London’s kink community.
To mark the premiere of his new documentary on surfing giant Gerry Lopez, the filmmaker and former pro skateboarder sits down to share his unique brand of wisdom.
A new series of photos by Johny Pitts shines a light on communities and subcultures that have all too often been overlooked.