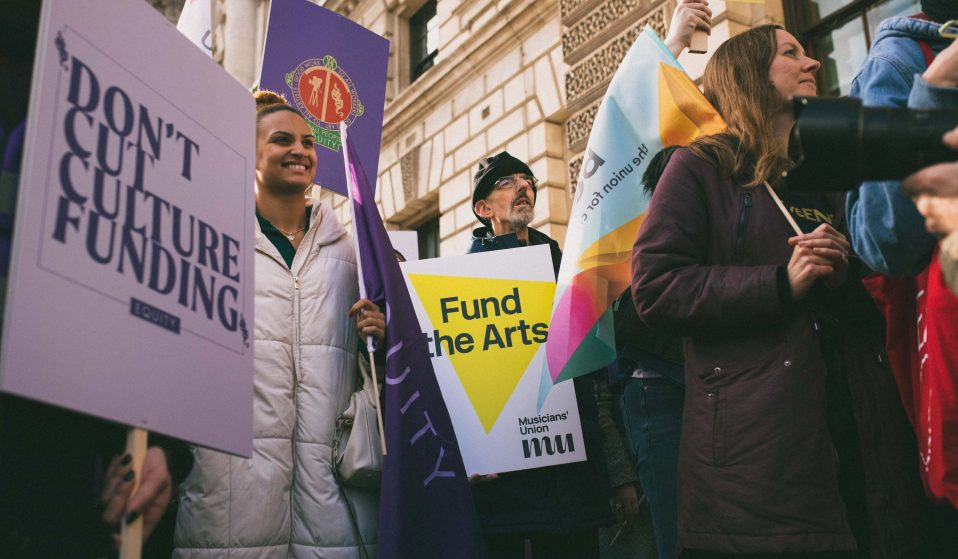 The demonstration took place this week over plans to slash £50m from arts bodies in London.

The demonstration took place this week over plans to slash £50m from arts bodies in London.

Yesterday hundreds gathered outside the Department for Digital, Culture, Media & Sport (DCMS) calling for a reversal of cuts to arts organisations and an increase in funding.

The demonstration, which saw 300 people protest outside the central London offices of DCMS, was organised by Equity, the performing arts and entertainment trade union, and brought together supporters of the campaign; members from trade unions, including Equity, Bectu, the Musicians’ Union, the Writers’ Guild of Great Britain and PCS; and workers from affected arts organisations such the English National Opera (ENO) where over 300 jobs are at risk.

Arts Council England (ACE) recently announced devastating cuts to their portfolio of arts funding. UK arts organisations such as the ENO, Donmar Warehouse, Oldham Coliseum, Hampstead Theatre, The Watermill, The Gate and Regional Theatre Young Director Scheme have been removed from the portfolio entirely. This means that many have lost 100% of their guaranteed funding.

Actress and Equity member Juliet Stevenson was also in attendance yesterday, as well as the Labour MP and former Shadow Chancellor John McDonnell with the event culminating in the ENO chorus singing ‘you’ll never walk alone’.

Stevenson told Huck, “The government’s line that this is ‘Levelling Up’ makes no sense at all. Spreading slashed funding more thinly doesn’t help our economy or communities anywhere in the UK. This is an agenda of cultural vandalism to silence innovative work, attack terms and conditions, and throw arts funding into the hands of a wealthy few.”

This demonstration follows two events organised by Equity on Monday 14 November at ACE offices in London and Manchester, calling for the reversal of funding cuts. They were attended by hundreds of Equity members and affected arts workers, including actresses Julie Hesmondhalgh and Olivia Williams. Supporters include Mayor of Greater Manchester Andy Burnham, actress Maxine Peake, and writer Ian Kershaw

Across the organisations under threat hundreds of Equity members are facing the terrifying prospect of the loss of both permanent and freelance jobs.

“Unlike many producers, and the Arts Council itself, Equity and the trade union movement is unbought and unbossed,” General Secretary of Equity Paul W Fleming  told Huck. “We’re rallying to tell DCMS the hard truth: they’re wrecking local economies, destroying good jobs, silencing innovative art, and abandoning diverse audiences. We’ll fight them, and those who use these cuts to reduce terms and conditions, with every tool we have. Enough is enough.”

The government claims the cuts are part of a “levelling up agenda”. Whilst 70% of cuts fall within London, the overwhelming majority of organisations removed from the portfolio fall outside of London. It comes as culture funding as a whole is down 46% in real terms since 2005. Unions claim there is no levelling up without good arts jobs and no economic growth without proper investment in culture in London and beyond.

Also in attendance was Labour MP Nadia Whittome and Phillipa Childs, the head of BECTU. Childs told Huck, “Over £50 million worth of government cuts to London’s arts funding is deeply concerning for our members and for the UK’s standing as a leading cultural centre. Increasing regional access to arts and culture is always welcome, but this must not come at a devastating cost to the nationally significant institutions that London is home to. These short-sighted decisions are robbing Peter to pay Paul and have created monumental anxiety and turmoil for venues, their employees and for the thousands of freelancers who rely on them for work.”

Photographer Theo Mcinnes was on site to capture the action. 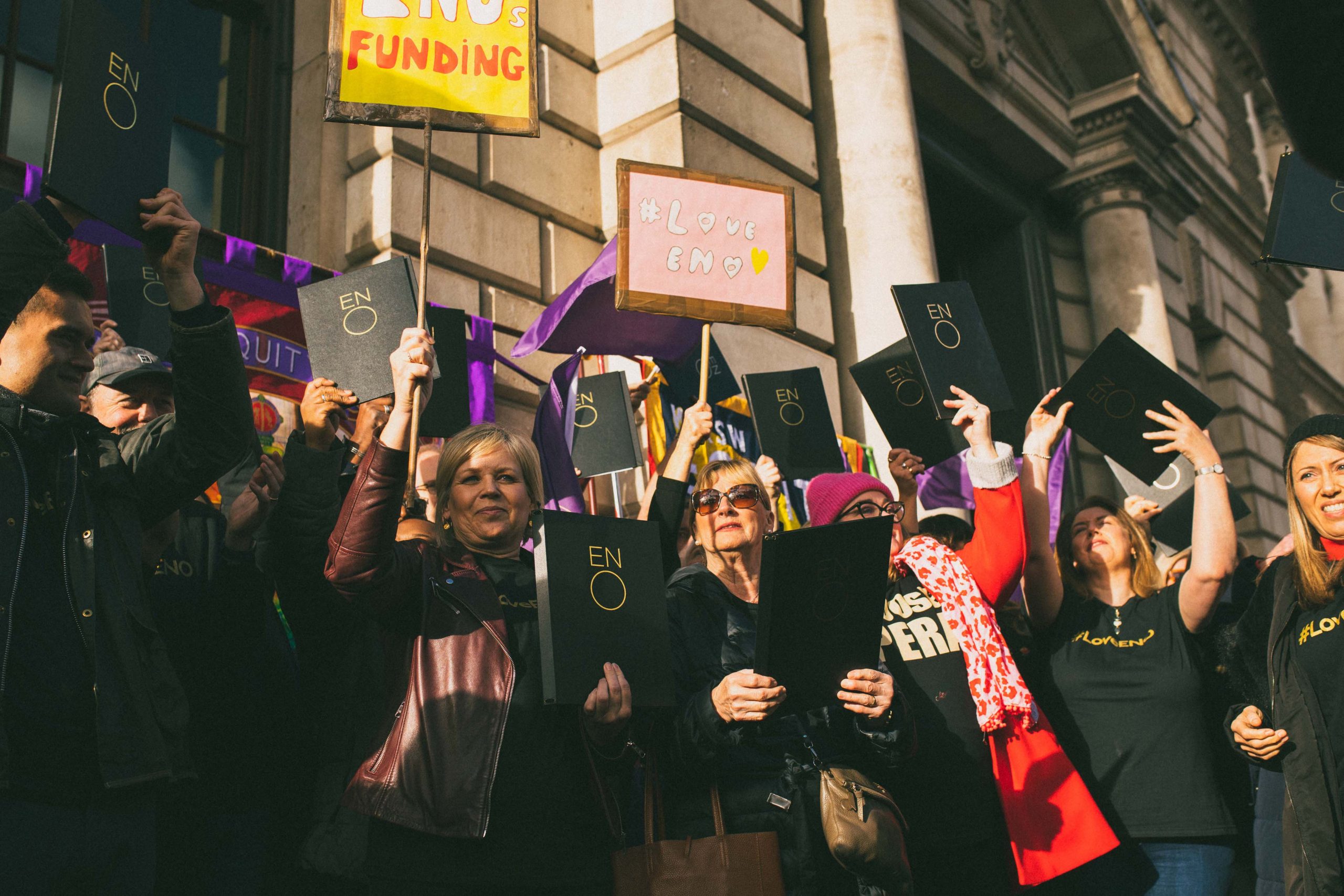 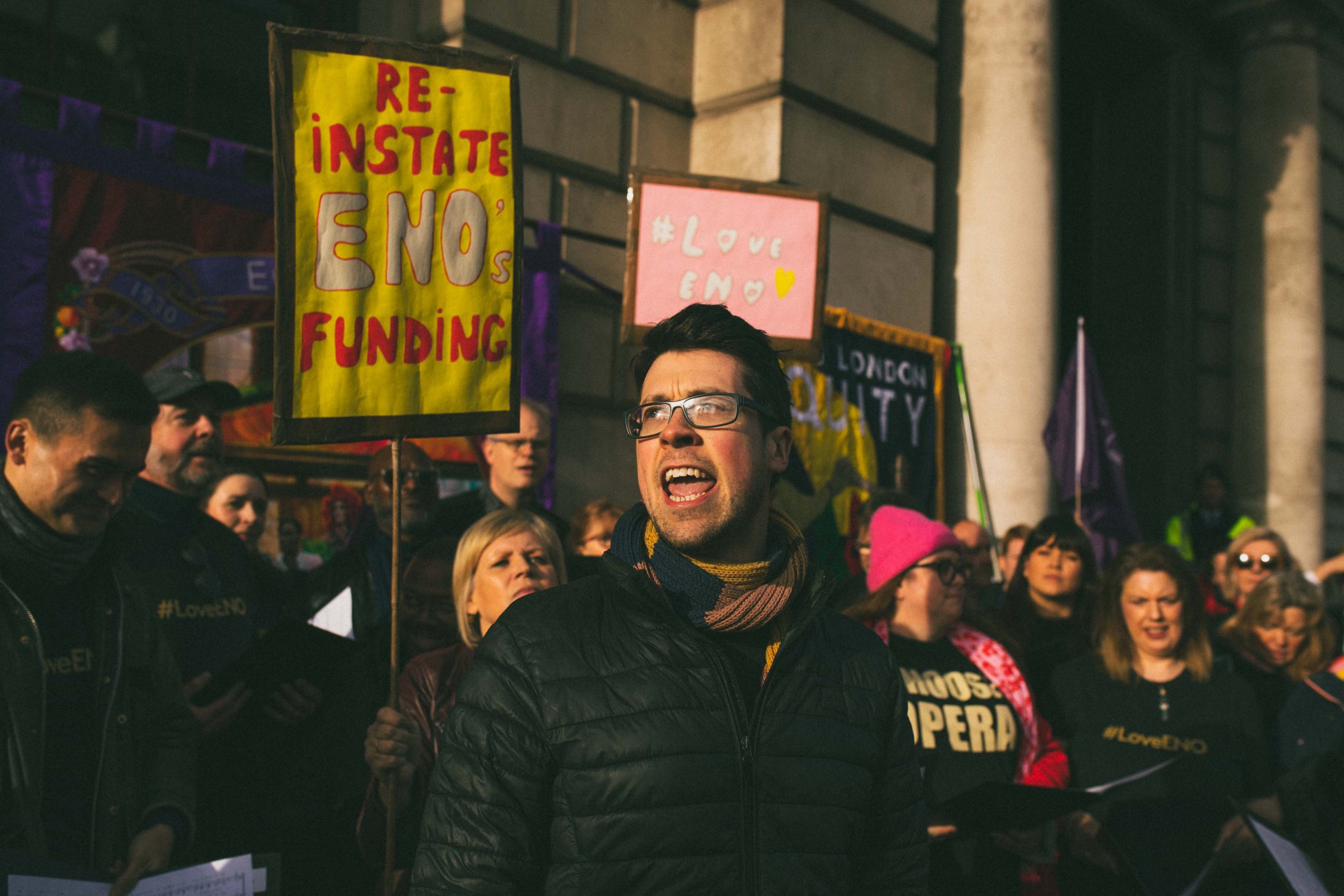 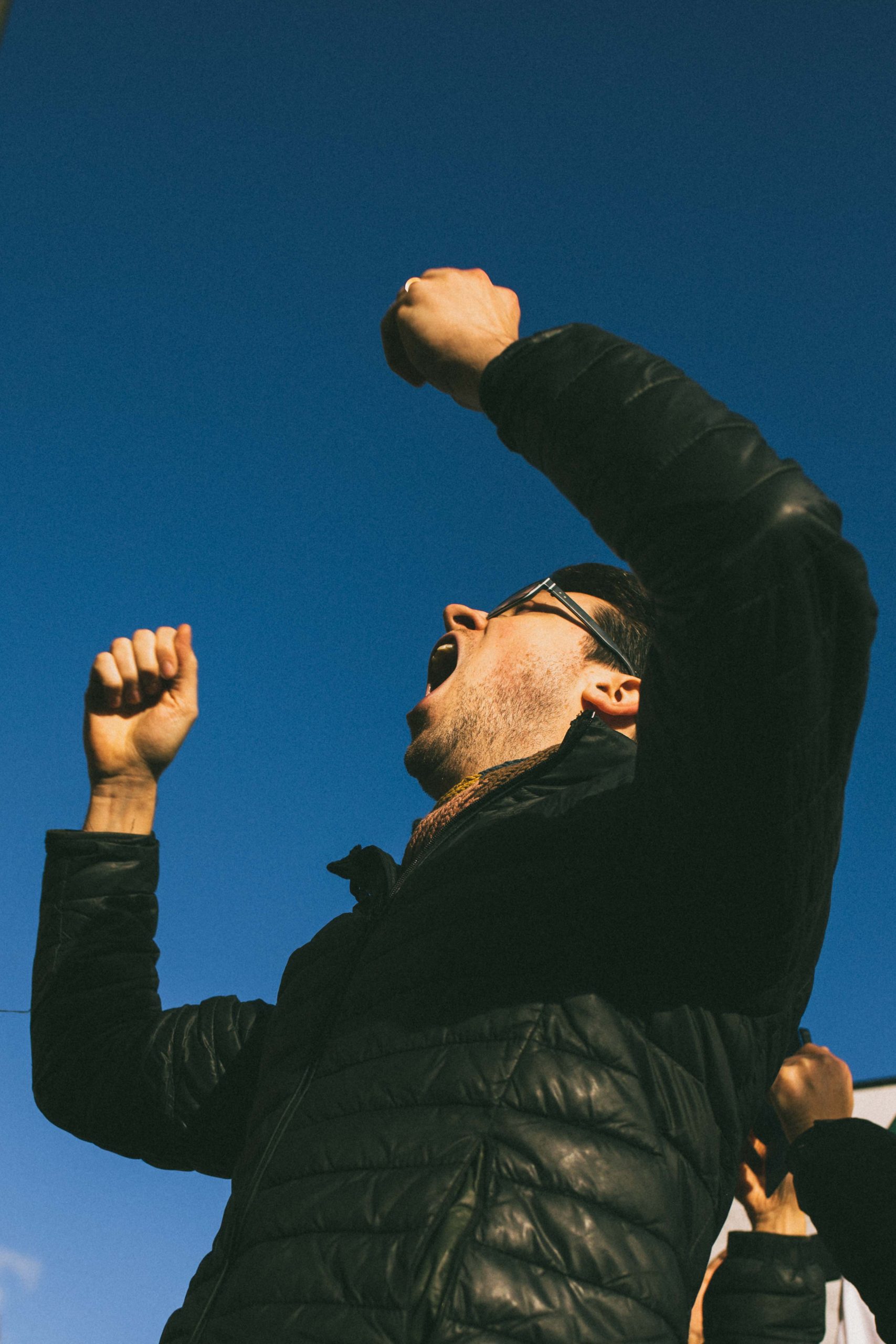 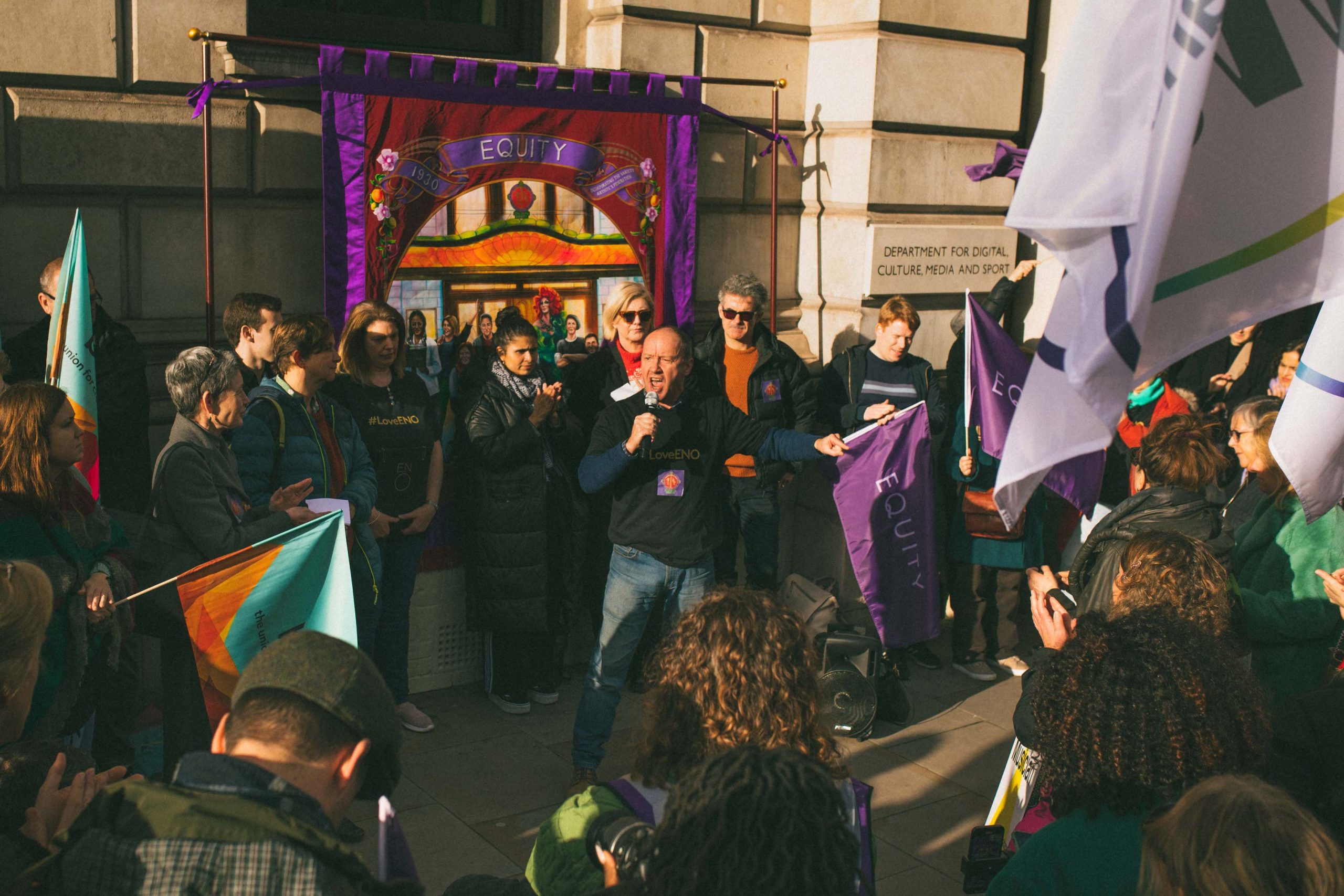 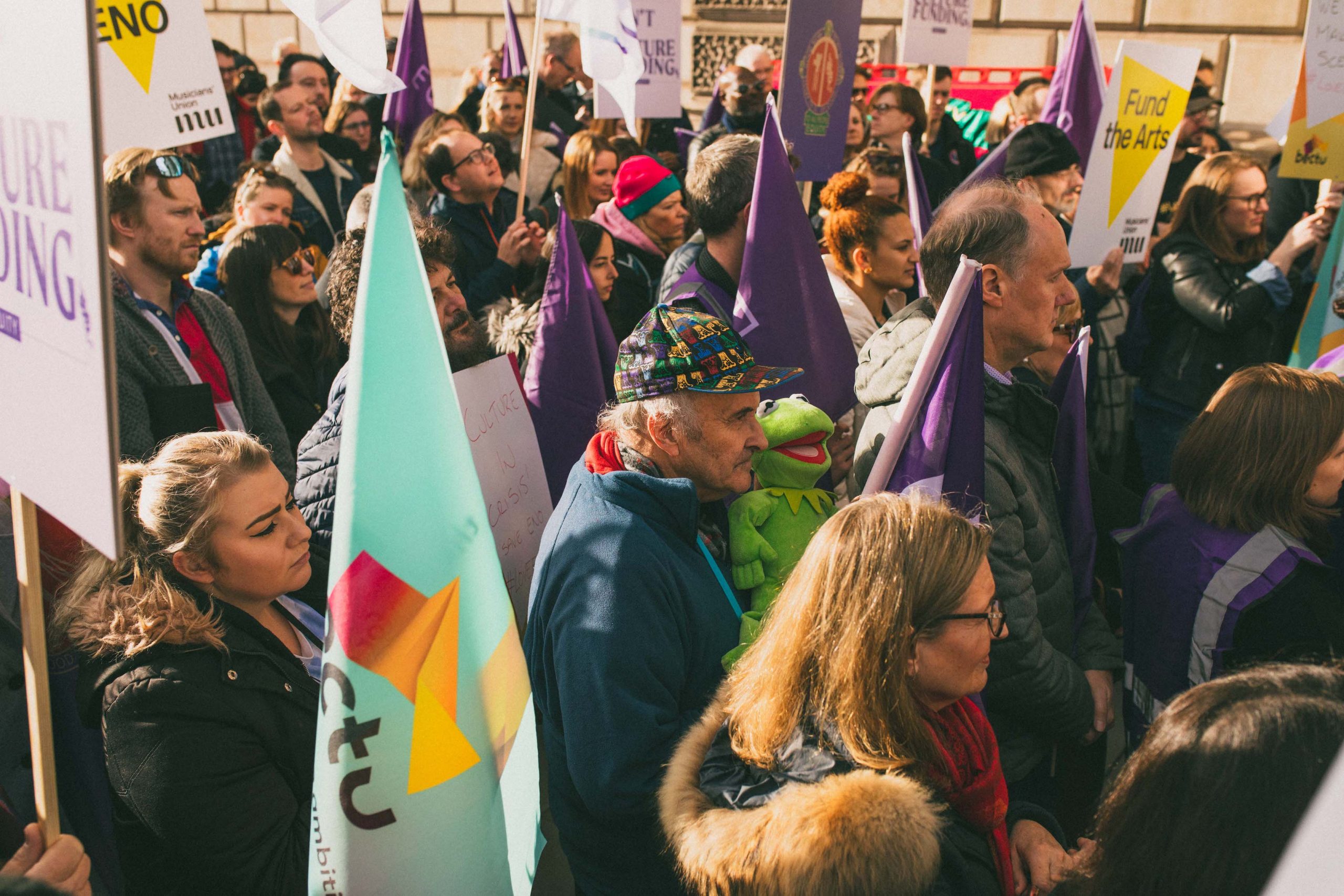 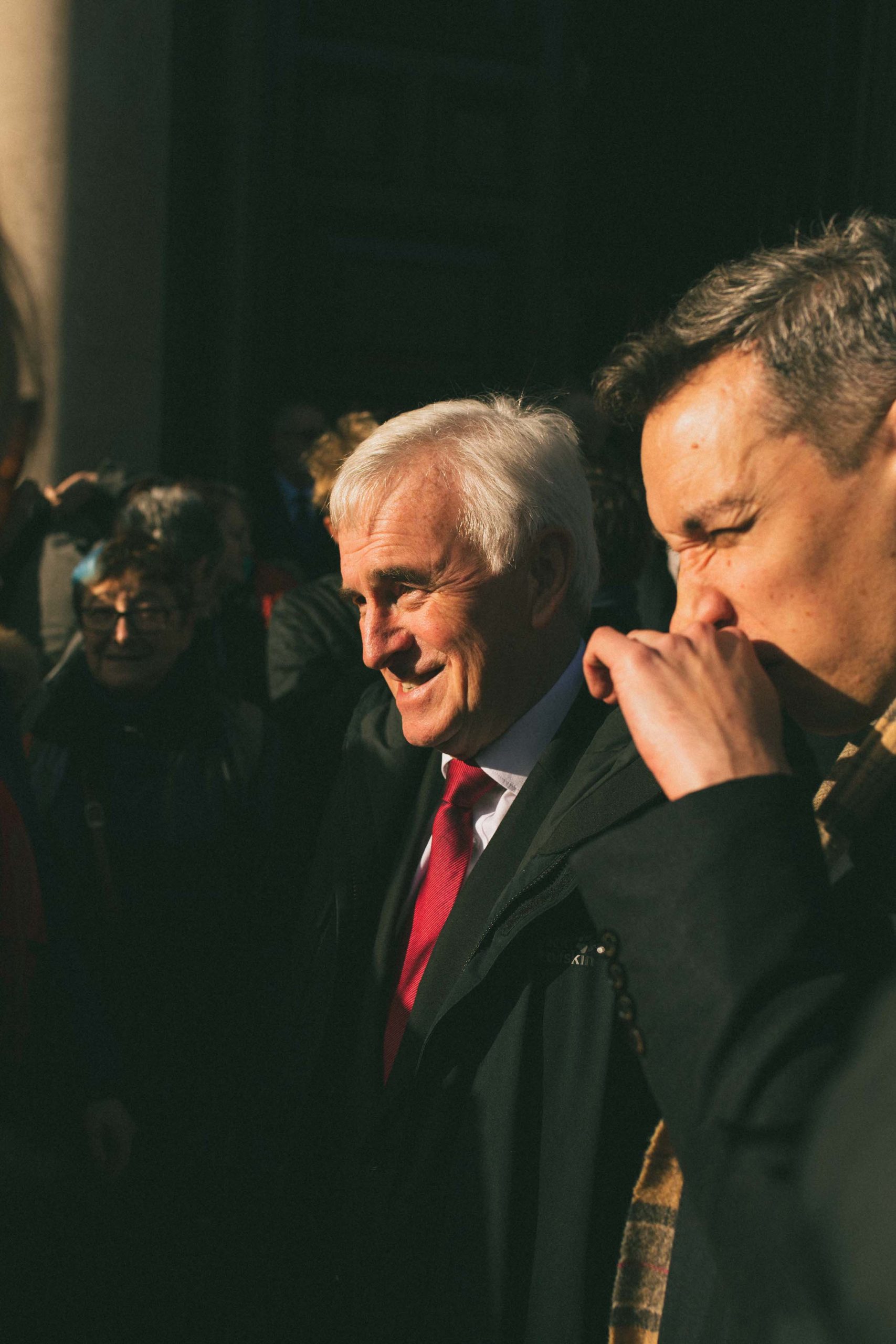 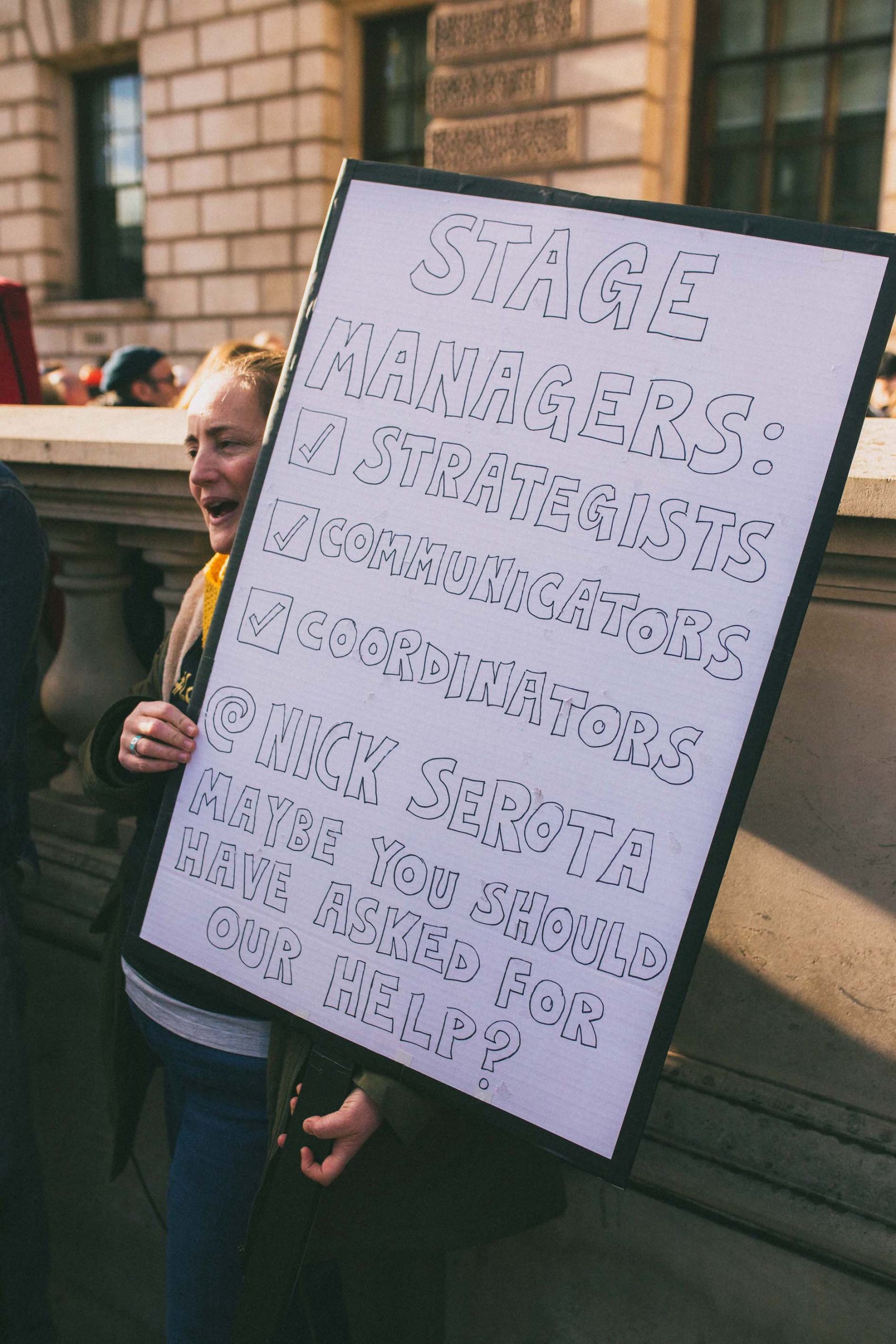 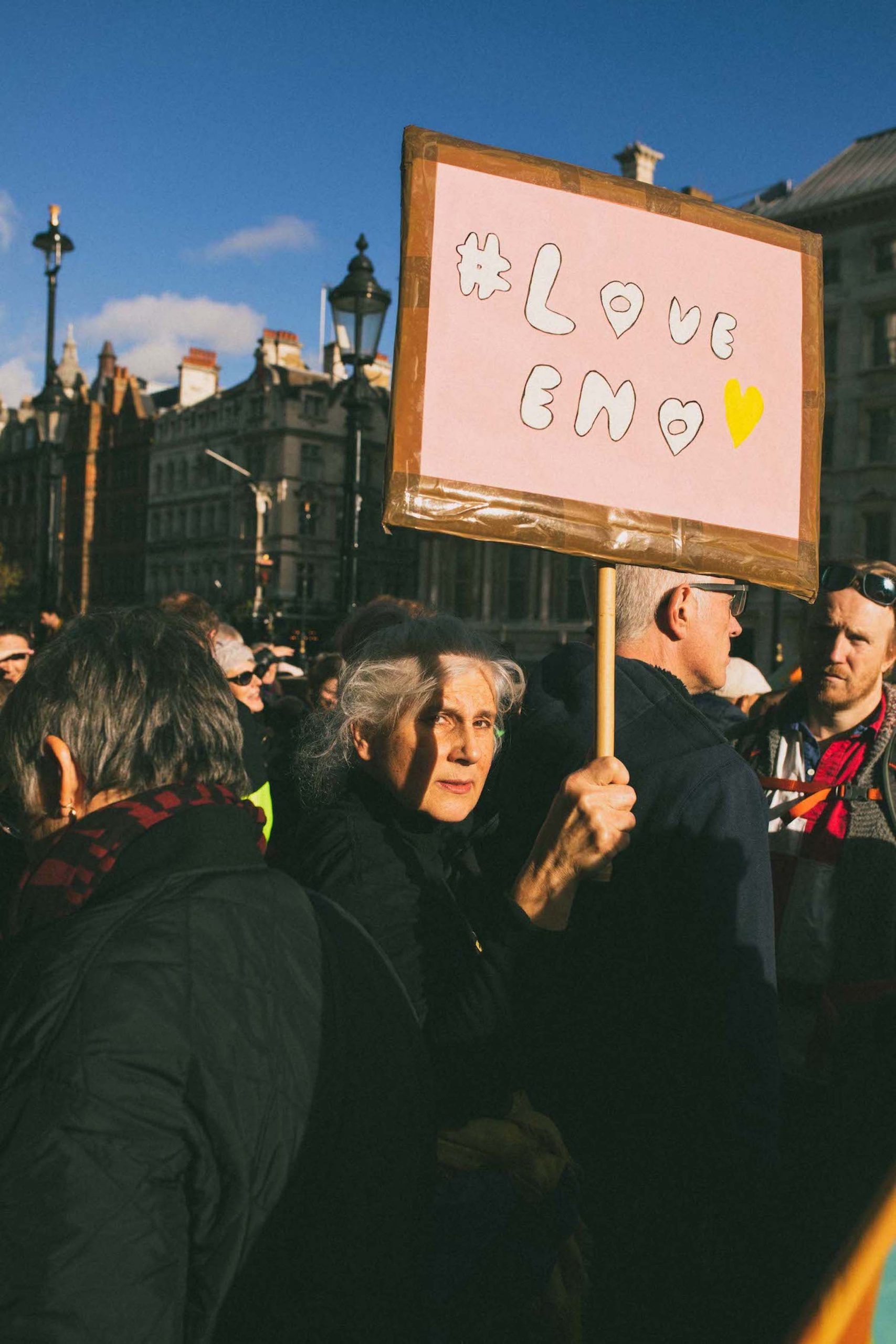 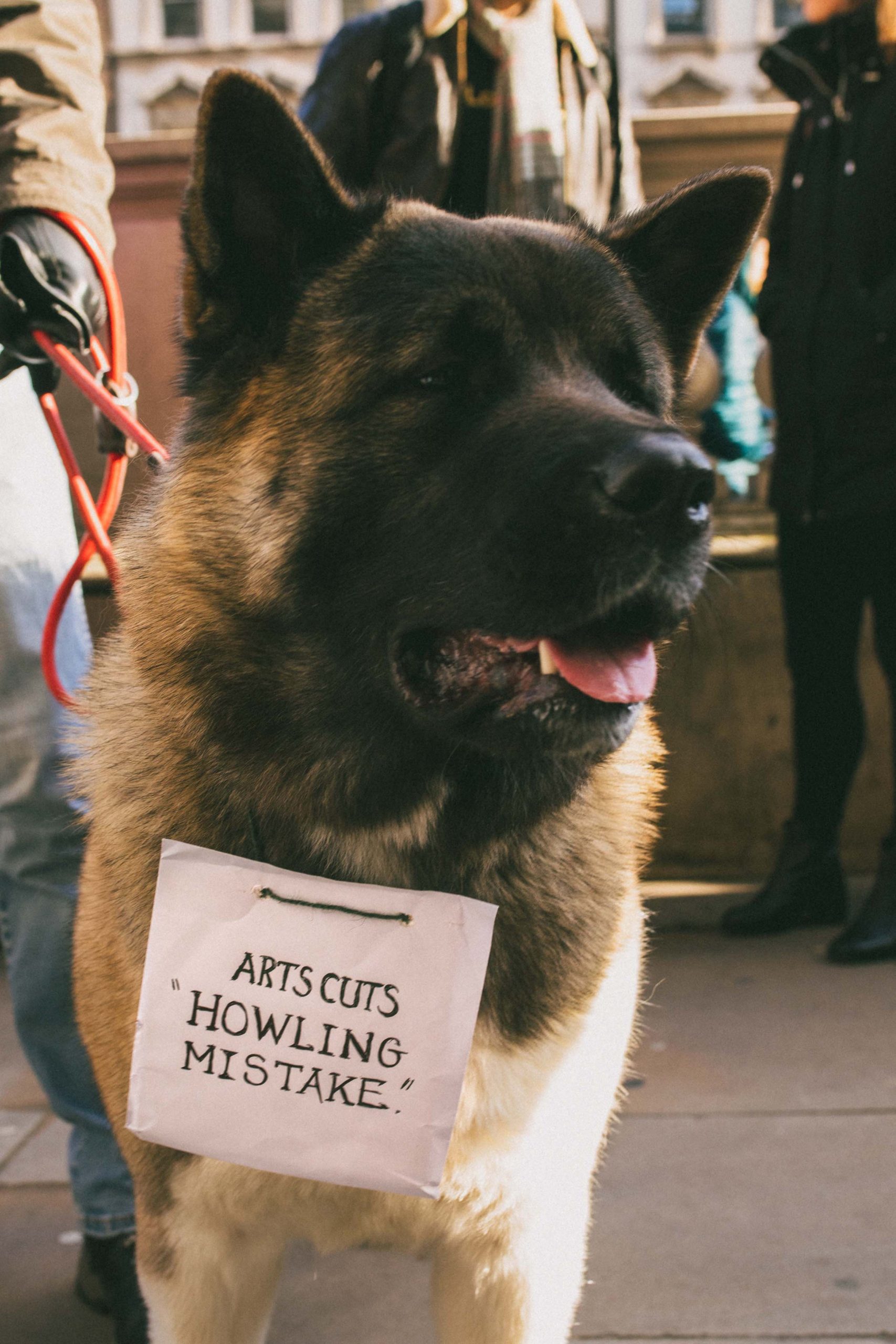 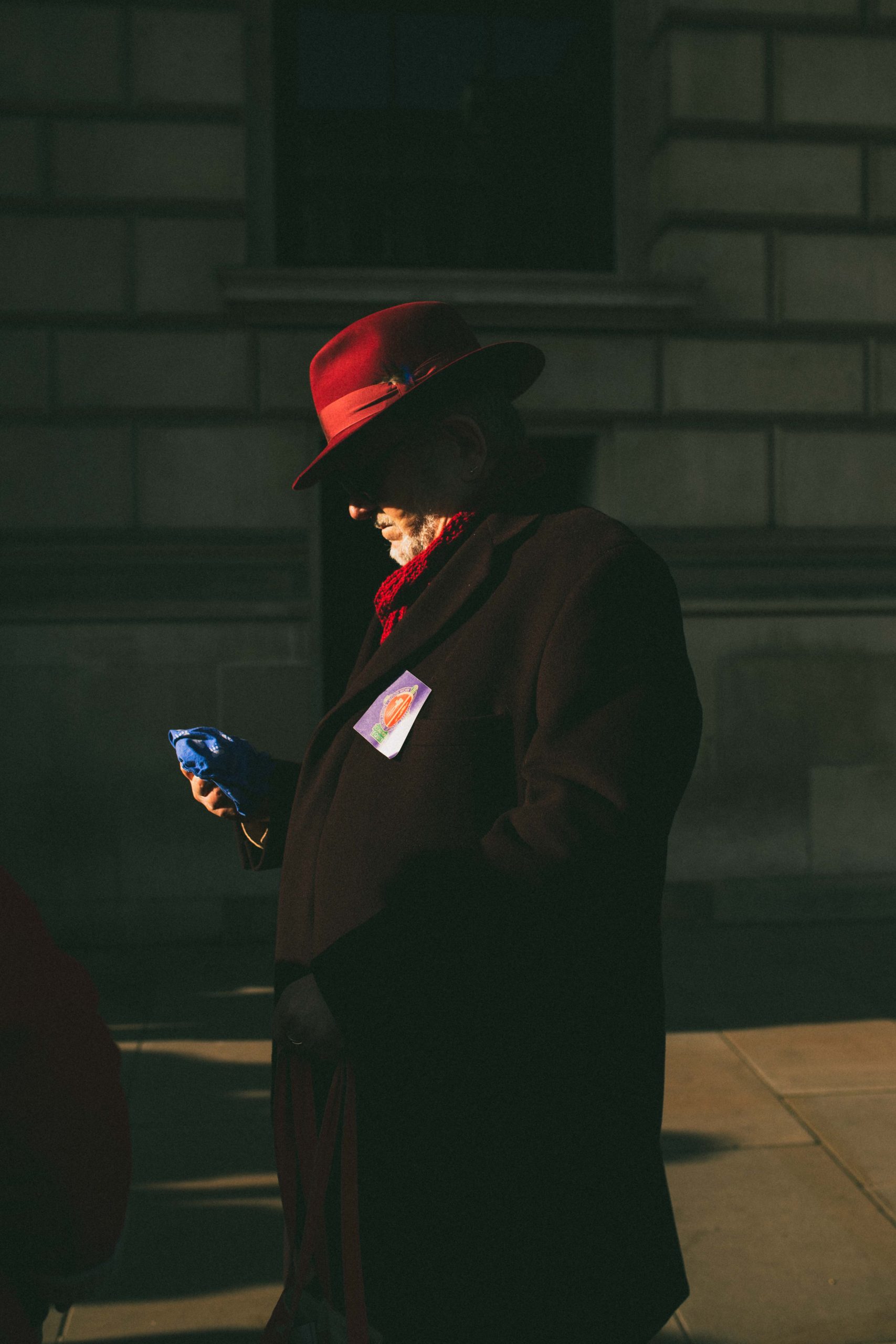 Linkedin
OTHER ARTICLES
On the tenth anniversary of attempting to take his own life, writer Ben Smoke reflects on what he’s learned – and the road ahead.
Photographer Jeffrey Silverthorne always treated his subjects – often those living on the margins of society – with empathy and respect.
Ireland’s national sports are modernising. At the forefront of this movement is Na Gaeil Aeracha, the country’s first ever queer GAA club.
The demonstration took place this week over plans to slash £50m from arts bodies in London.
Little-known during her lifetime, Maier is now recognised as one of the great American photographers of the twentieth century.
Renée Jacobs’ photos document the final chapter of Centralia – a small Appalachian mining town home to an unstoppable fire blazing 300 feet below ground.