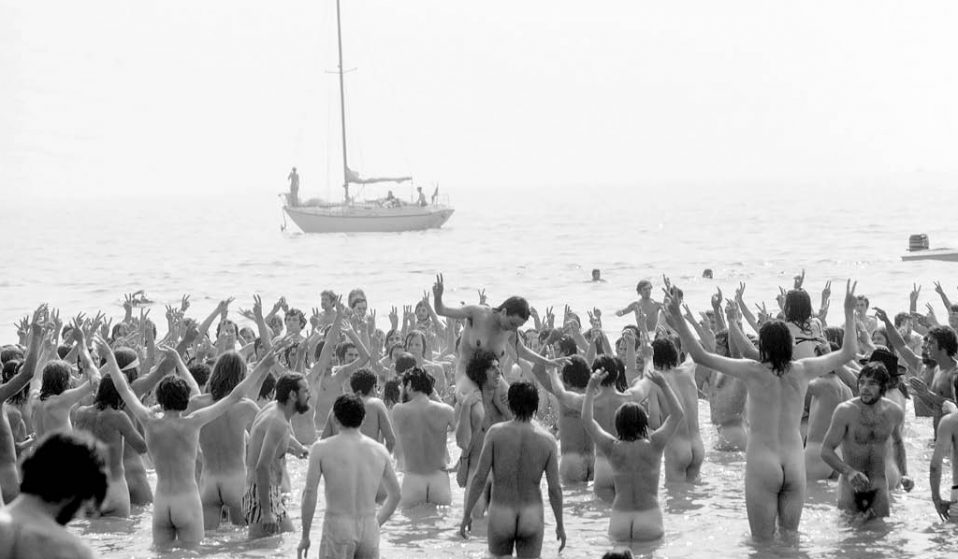 Photographer David Hurn recounts documenting the counterculture music event at the height of the swinging ‘60s, which saw performance from the likes of Bob Dylan, The Who and Joe Cocker.

Now age 87, Magnum Photos member David Hurn remembers the fateful day in February 1954 that first brought photography into his life. While on break, the young army cadet training at Sandhurst Military Academy was paging a copy of Picture Post magazine and stumbled upon a photograph of a Russian army officer buying his wife a hat in a Moscow department store.

“I started to cry – not something one normally did in the officers mess,” says Hurn, who describes how the picture triggered a memory of his father who he hardly saw during World War II. “One of the first acts he did at the war’s end was to take my mother, me in tow, to Howells, a department store in Cardiff, to buy her a hat: my first recollection of their love for each other.”

Suddenly understanding the power of the photography, Hurn decided in that moment to become a photographer despite knowing nothing about the medium. “Thinking back, I have no recollection of ever having taken any pictures,” he says. “To give up a firm profession for a total abstract one was reckless.” 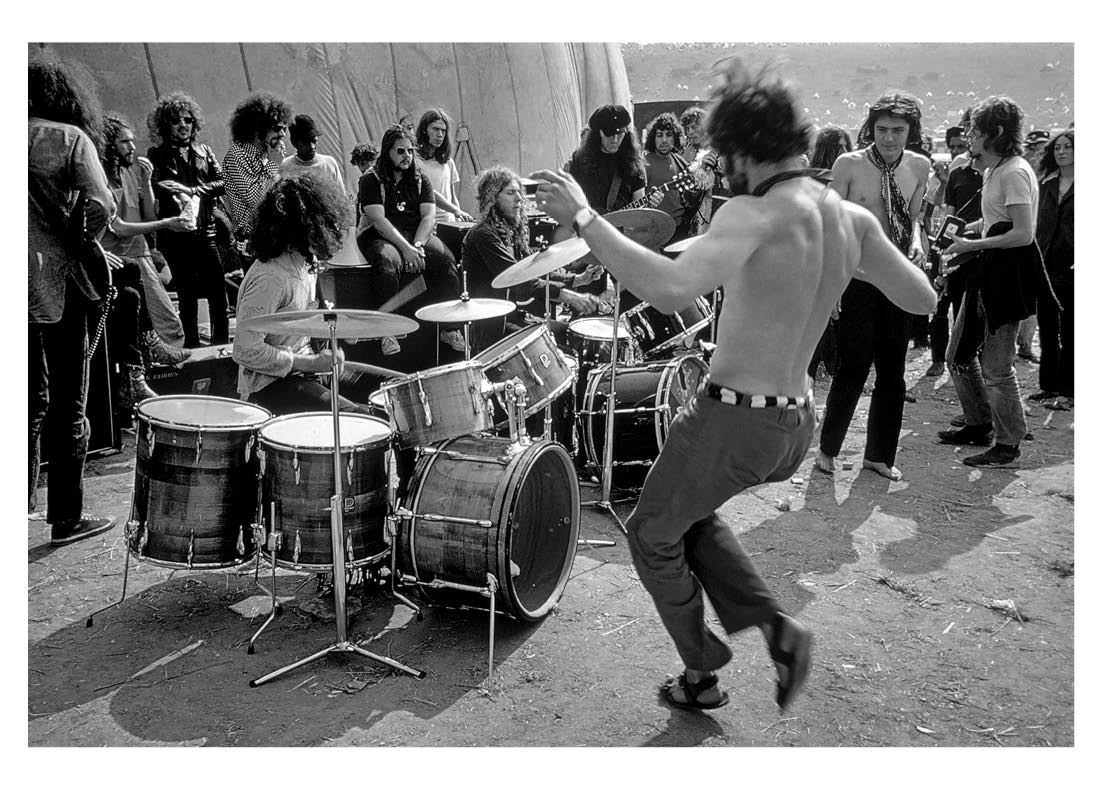 But Hurn’s gamble paid off. He began his career the following year with Reflex Agency, before joining Magnum in 1967. “I was very much interested in what is now know as the Swinging ’60s,” says Hurn.

Headlined by Bob Dylan, in his first major public appearance since his near-fatal motorcycle accident in July 1966, the festival drew some 150,000 people for performances by The Who, The Band, Richie Havens, Joe Cocker and The Moody Blues, among others. 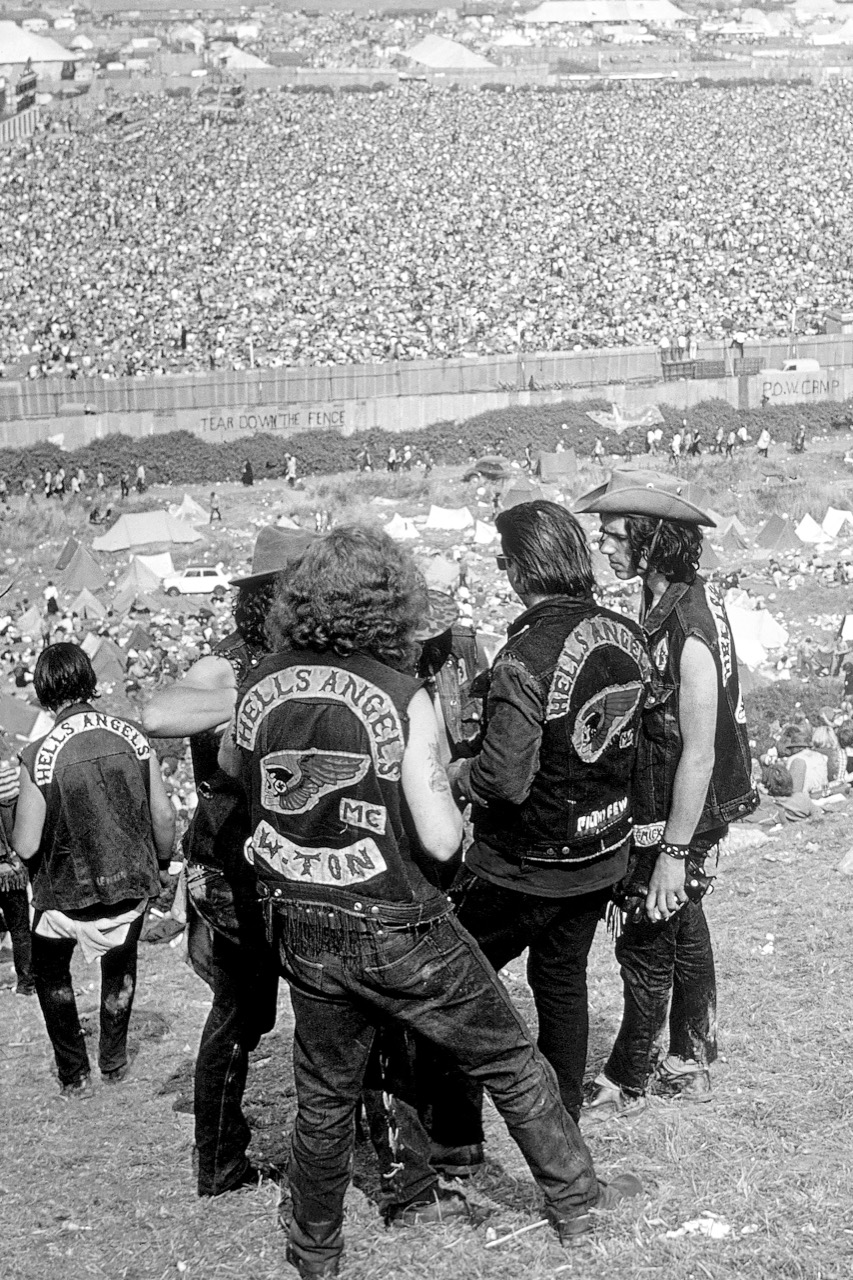 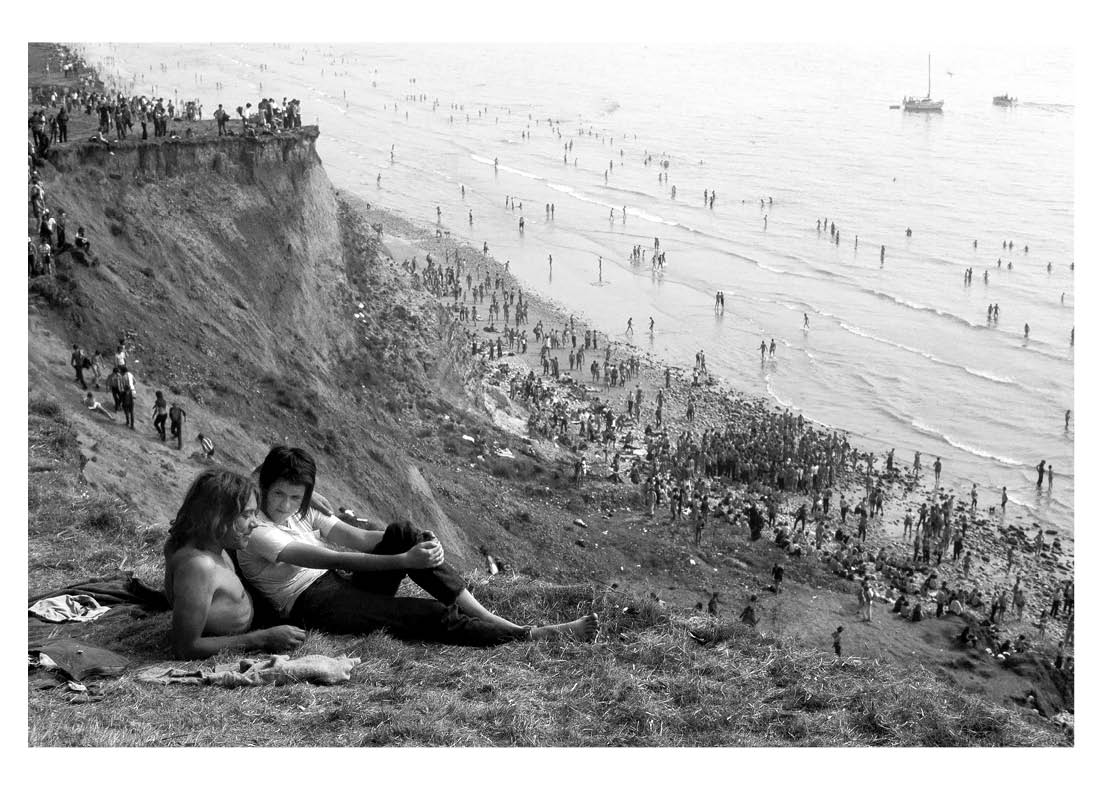 This was Hurn’s first visit the festival, and he arrived in style. “I was staying with Jane Fonda, in France, and we actually flew in by helicopter,” he recalls. Other artists in attendance included John Lennon, Keith Richards, Eric Clapton, Elton John, and Syd Barrett, who were ensconced in a sealed-off VIP section in front of the stage. “I was surprised by the apparent loneliness of some of the artists. I sensed a very hierarchical system,” Hurn says.

Admittedly not an “excessive fan” of pop groups and bands, Hurn spent his time photographing the revellers across the Wootton countryside. “The biggest bonus was happening to be on the beach when for a comparatively short period of time a large group discarded all their clothes – a case of by luck being at the right place at the right time,” he says.

Surrounded by the masses, Hurn remembers feeling that “apart from a corralled few, there were few discriminations in the audience… All are having the time of their lives. All were friends, at least for a couple of days, with a common purpose: generous fun. We could do with more of it.” 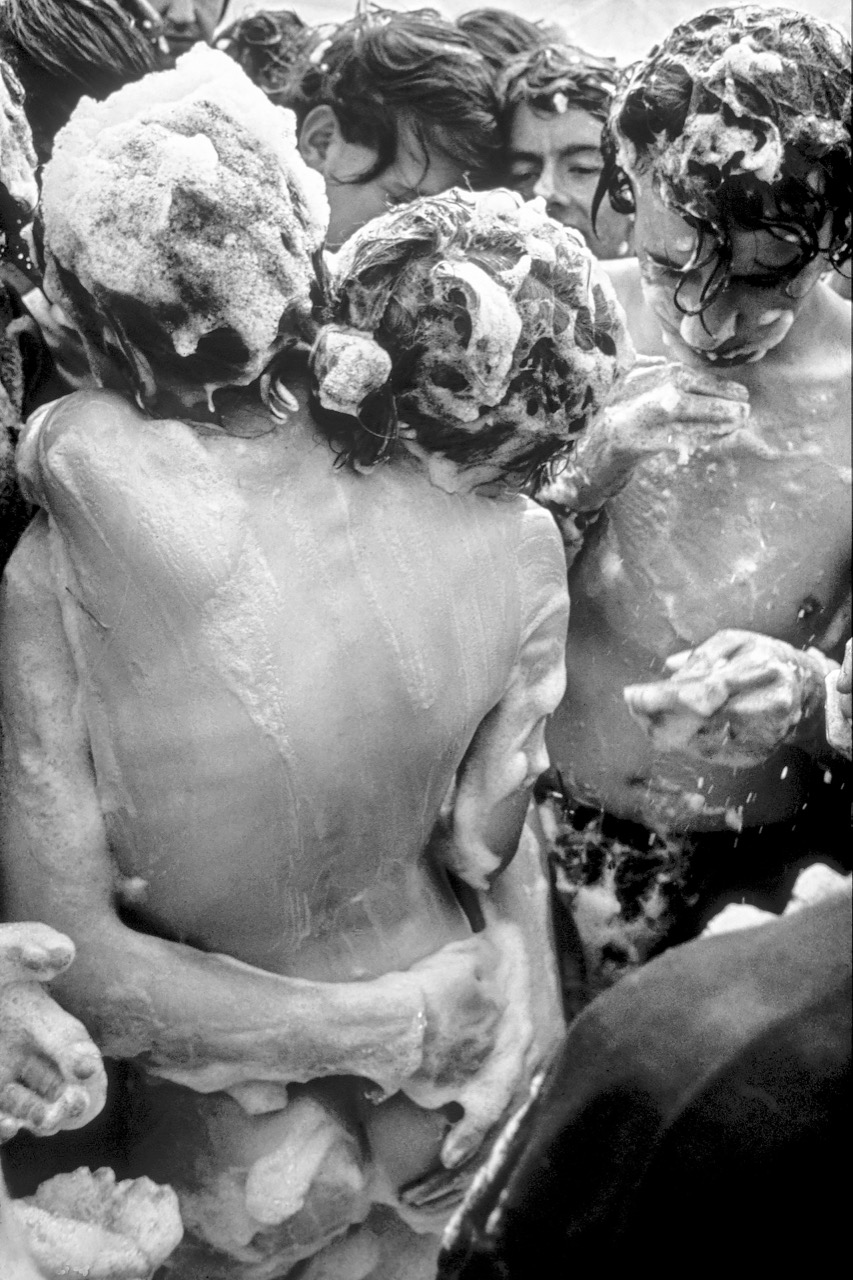 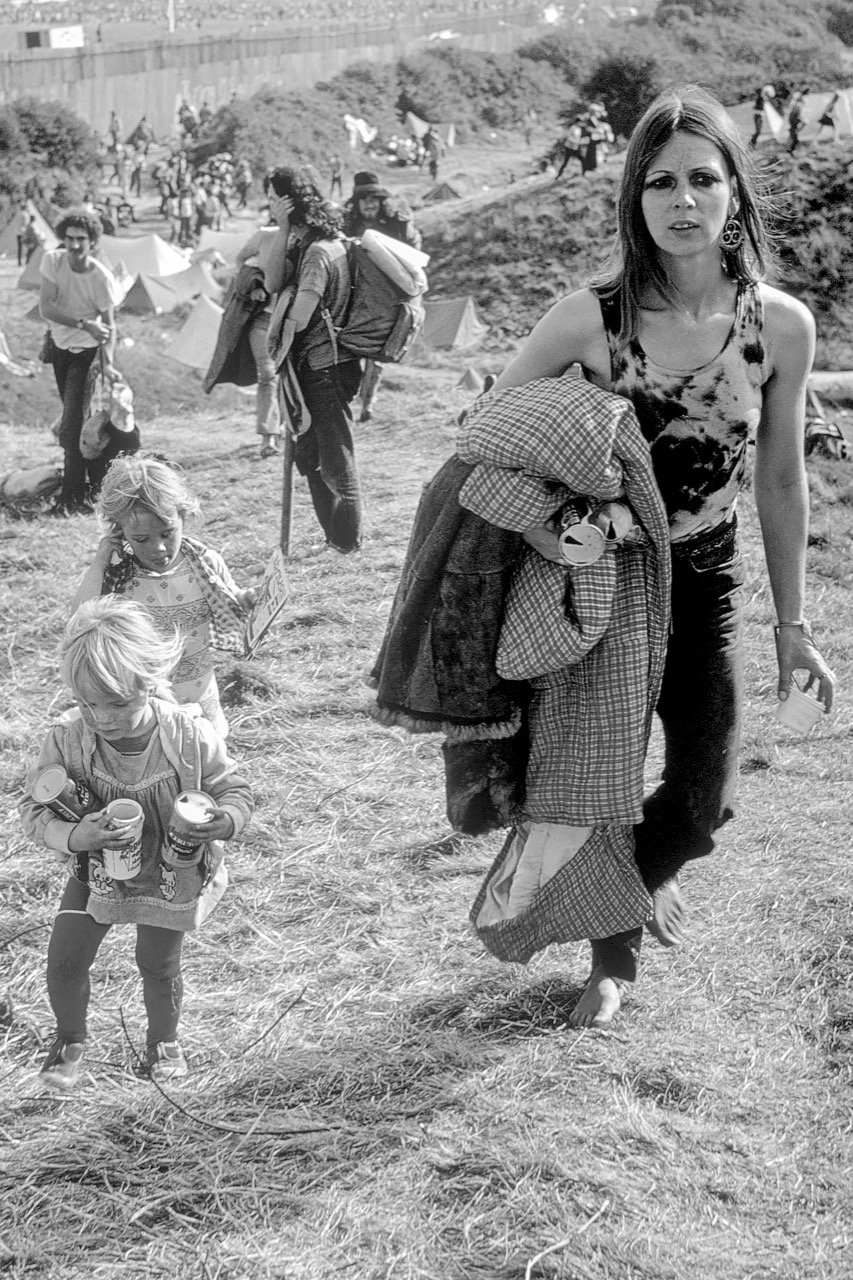 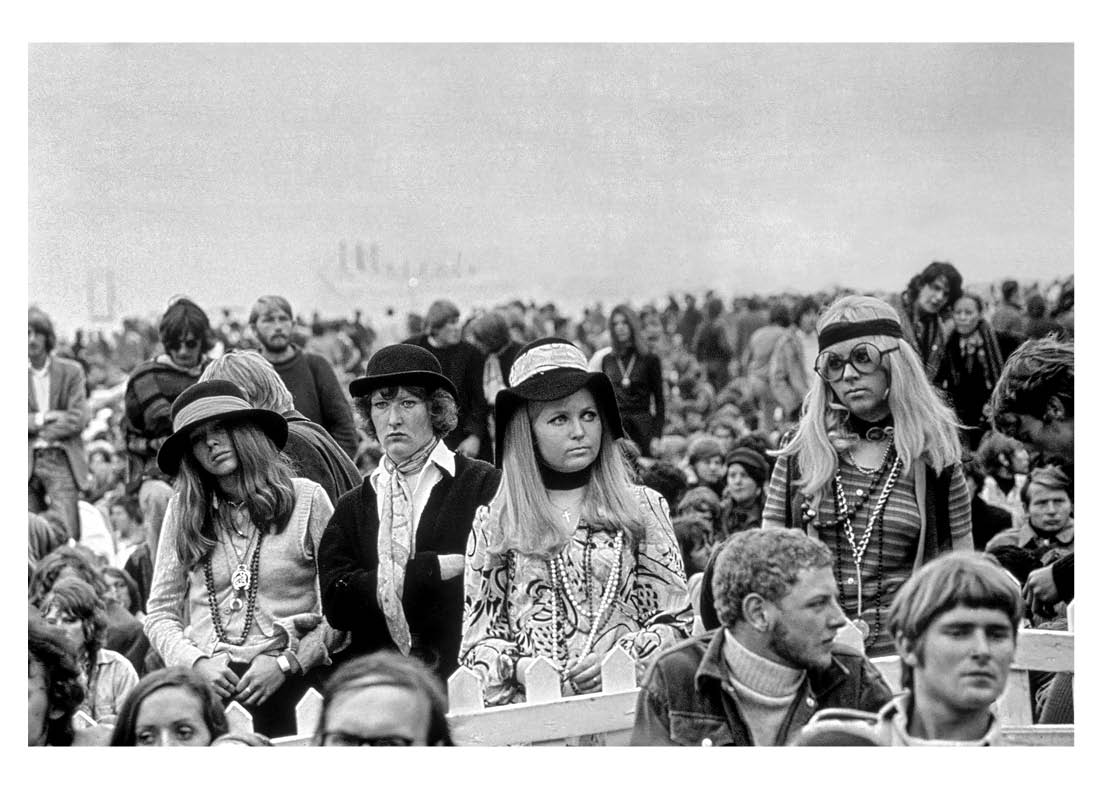 Linkedin
RELATED ARTICLES
OTHER ARTICLES
After news broke last week around an expected reversal of the 1973 landmark law that made abortion legal in the US, protestors gathered in the UK in support of American women.
Photographer Robin Graubard’s debut book offers an unflinching record of turbulence and change across the Balkans.
In the last of our dispatches from OFFF Barcelona, Rufus Deuchler and Vincent Gault discuss the future of creative process.
Our new magazine is here, starring the inimitable Mitski. Order your copy now and join us on a trip around the world.
In our first OFFF Dispatch piece, the Arce Studio founder shares her tips on standing out from the crowd.
Following the release of his newly republished 1991 book, Redheads, the American photographer reflects on his celebration of ginger people and their magnetic power.