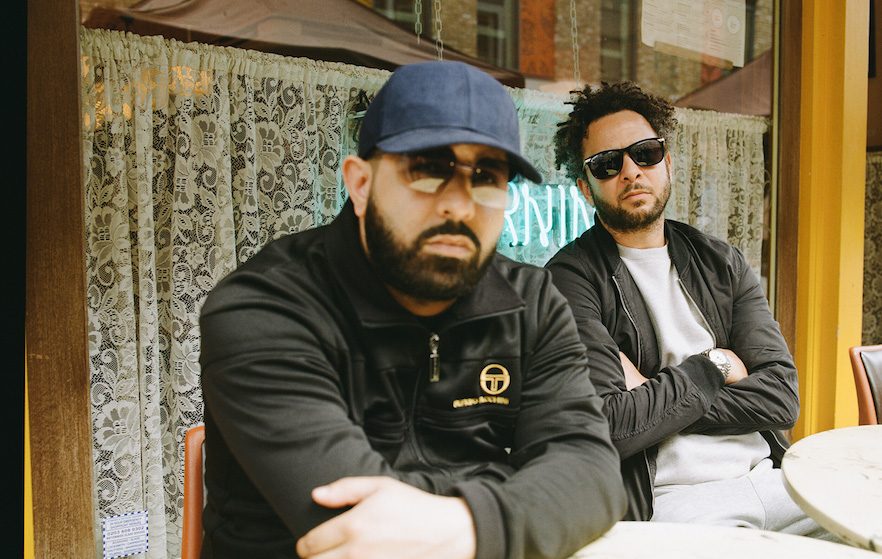 Ahead of the release of their first collaborative album, the producer and rapper talk psychedelics and the state of UK hip hop.

Ahead of the release of their first collaborative album, the producer and rapper talk psychedelics and the state of UK hip hop.

Sonnyjim and The Purist were at Outlook Festival when they decided to record an album together. Fuelled by a natural chemistry and mutual love for hip hop, they returned from the Croatian rave haven of Fort Punta Christo in a daze of creativity, heading straight for the studio, where Sonnyjim laid down a verse. One take. They called the song ‘Barz Simpson’.

That was in 2018. After four years of sample-clearing, more feature-securing and endless perfectionist tweaking, Sonnyjim and The Purist’s collaborative masterwork White Girl Wasted is finally ready for release. Like its Homer Simpson artwork, the album is a technicolour bender of drug references and cartoonish overindulgence; a semantic field of cocaine and psychedelics, gumming coke from a toilet bowl, shrooms, Lemmons 714s and flying saucers. It comes with production collaborations from two members of hip hop royalty in Madlib and DJ Premier, plus a guest verse from the late MF DOOM, secured through a mutual connection two years before the metal-faced enigma passed away.

The artists behind White Girl Wasted have their own storied history as part of the scene. Sonnyjim, who hails from Birmingham, has been around via YouTube rap battle channels like JumpOff and self-released mixtapes featuring underground names like Jehst and Stig of the Dump since about 2005. In 2016, he released the album Mud in My Malbec, a sublime work of laconic hip hop and a subtle, artful reinvention that introduced Sonnyjim as a loquacious storyteller who also produced a lot of his own beats.

Then there’s The Purist, sometimes known by his government name Lawrence Lord, a beatmaker, sample hoarder and the omnipotent supremo behind the underground hip-hop label Daupe – a UK-based vinyl imprint home to records by Westside Gunn, Mach-Hommy, Lord Apex, Armani Caesar, Boldy James, Chris Crack, Benny the Butcher, Ghostface Killah and Conway the Machine. Founded on an artist-owns-everything model and quality-over-quantity ethos, Daupe records and merch are known to sell out in hours. The Purist is also one of the most talented producers in Britain, a gifted manipulator of samples with production credits on songs featuring Freddie Gibbs, Roc Marciano, Your Old Droog, Casisdead and Danny Brown.

Purist and Sonnyjim spoke about their collaboration on a Zoom call, often finishing each other’s sentences like a married couple.

Alright before we start: Purist, how would you describe Sonnyjim to someone who’s never met him?

Purist: Wow, erm… gotta choose my words carefully as he’s next to me.

Sonnyjim: Hold on, I’ll go out the room.

Purist: A Picasso for the modern age, fuelled by… drugs.

Sonnyjim, how would you describe Purist?

Talk me through the DOOM collab.

Sonnyjim: We had some mutual friends who put us in touch. When I got the verse I didn’t even open the file. I didn’t wanna check it just in case it weren’t what we were looking for. Until Lawrence called me later on like ‘Yo…’

Purist: We cancelled the studio, went to the shop and bought a bottle of champagne. We celebrated a win that day.

Did DOOM ever get to hear the track?

Sonnyjim: He loved it, basically. He was doing a compilation for Adult Swim, and he wanted to take the track off us. But we wanted to keep it.

Where were you when you heard that he’d passed away?

Sonnyjim: It was on New Year’s Eve weren’t it? I got the message and probably like everyone else I didn’t really believe it at first, then I spent the rest of New Year’s Eve on the internet like ‘Rah, is he really dead?’

Jay Electronica, Madlib and Preemo are also on the record, plus you’ve worked with UK guys like Skinnyman and Casisdead. What is it you have in common with these legends of hip-hop?

Purist: It’s the quality of the work I suppose. A lot of people just phone their work in at quite low standards. I’ve probably only put out 30 songs in 10 years. That’s how high my critique of my own work is. Cas[isdead] has only put out probably 40 songs to this day. Attention to detail is sky high.

Has the UK underground scene fallen off?

Purist: Was it ever on?

It was never on in a mainstream sense, but when artists like Foreign Beggars, the Mud Family, Jehst and Skinnyman came up in the early 2000s there was at least a scene right?

Whereas now you have artists like Lord Apex, Lee Scott, and Sonny, you’ve hit a new level since probably Mud in My Malbec in 2016, but the same can’t really be said for people like Skinnyman – even though he’s royalty among people who know him.

Sonnyjim: I mean I will say there’s not much infrastructure here.

Purist: Yeah there’s very little support. Until recently, the entire vinyl thing, it was very hard to do this as a full-time job. Over the past three to four years there’s been a lot of money in putting out independent music and merchandise. So going back to when Skinny was around, Council Estate of Mind, it’s a classic, but since then there’s no infrastructure for him to put out a real album, so maybe that’s why he’s drifted away…

Skinny also got fucked over on Council Estate of Mind and hardly made any money, when his label boss Joseph Christie – aka Braintax – suddenly jetted off with the cash. Daupe is founded on making sure artists get freedom and also get paid, right Purist?

Purist: Don’t speak too soon. The jet is being built as we speak… Yeah, because as an artist I haven’t been ripped off before but I’ve been kind of ripped off, and the way I run Daupe is it’s completely transparent. We don’t own anything, we’ll licence it for a run of vinyl, and that’s it, you own the rights, we put it out, and it’s done, it’s back to you.

Both of you clearly have an ear for a good skit – like the ones on ‘Doc Elis’ and ‘Buy Cocaine Not Art’, plus that track ‘Monthly’ that you produced for Your Old Droog, Purist. Who’s finding these?

Purist: Both of us.

Sonnyjim: Yeah, whenever I’m on Instagram if I hear something funny I just put it to one side, and Purist is doing the same, and when it came time to do the skits and cuts…

Purist: We had more than enough skits ready to go.

Sonnyjim: We had bare stuff ready to go.

Sonny, your lyrics often make you sound like a character from a British gangster film – on ‘Oxy & Stoli’ you said your “Life’s like an outtake from Layer Cake”? Is it really?

Sonnyjim: Er… some of it. But also I do hang out with my missus and my dog and watch Housewives of Orange County, so we ain’t doing that all day long.

On ‘Does Shrooms Once’ you’re all like, “Your man did some mushrooms once, now he’s puking in the road with no shoes on”. How many times have you done shrooms?

Sonnyjim: Fucking… a lot. When we got the Madlib pack I was tripping my head off on shrooms, then we opened it and there was like a thousand beats in there.

Sonnyjim: I spent a long time tripping on shrooms going through all the Madlib packs.

How did that go?

Purist: You can hear how well it went.

Are you still microdosing?

Sonnyjim: Yeah I’ve been microdosing more than ever. A bit of LSD, bit of shrooms… I’m a psychedelics guy but I don’t like to get too deep too often.

Sonnyjim: I mean the amount of people in London who are going to these flipping ayahuasca parties – they’re rich, middle class folk. Once it infiltrates that sort of situation, it’s everywhere. Personally I think it’s a good thing. But everyone’s different. When I was younger I was doing a lot more drugs than I’m doing now, and it was cool, but when you’ve got different responsibilities, when your mind is elsewhere, it’s just about knowing yourself. Because the next man’s experience ain’t what yours is gonna be.

The Griselda guys make a point of removing the shame around drug dealing, emphasising the strength of character and business acumen that it requires. Are you doing the same?

Sonnyjim: I think there are good and bad characters in all vocations. You get some damn right bad people and you get some people with good character who are just doing this to…

Purist: …support their family. Or to buy an Aston Martin.

Are you two part of the UK rap scene?

Sonnyjim: No, I don’t think so.

Are there conscious reasons for distancing yourselves?

Sonnyjim: I think so. Not like, ‘Oh we’re gonna do this’, but I think like we didn’t wanna be tarred with that brush.

Purist: A lot of the artists’ art isn’t for me. Not in a bad way, maybe it’s for everyone else, maybe it’s gonna get a Grammy. It’s just not for me. How many actual classic rap albums have there been, made in England? Like genuinely? One? Two? If that. That says it all doesn’t it really.

Sonnyjim: I’d say a few more than that but yeah.

Purist: Proper classics though? Not just very good. There’s lots of very good albums. Ty had a great album. Skinnyman could be a classic, but past that…

Purist: Ok yeah, all of those people, great. I’m not slagging it off. But yeah, you know what I mean.

Coming back to White Girl Wasted I think the only thing fans will be disappointed by is how short it is. Is there more coming from you two as a pair?

Purist: Yeah, we’ve got a lot more stuff in the vault. If it does well, we’ll do number two.

Sonnyjim: An Aston Martin would be nice.

Sonnyjim: Putting material stuff to the side, success at this point would be the people who I really wanna work with hitting me up and tryna work with me, rather than the other way around.

Purist: Success for me would be this album reaching the heights that I think it should.

Purist: I didn’t say that.

Purist: Just doing quite well, being well received, getting good feedback from people, just people enjoying it and wanting more. That’s success for me. Cos I like the album.

White Girl Wasted will be released on 6 September 2022 on Daupe.

Linkedin
RELATED ARTICLES
OTHER ARTICLES
With skyrocketing rents, packed out viewings, bidding wars and more, renting in London has never been harder.
Yesterday thousands gathered outside Buckingham Palace after news of the Queen’s death broke.
Sean Maung’s photos are a love letter to the Black and brown communities that make up New York.
By turning a real-life crisis into daytime television fodder, TV bosses have once again shown themselves to be completely out of touch with audiences.
In his 2008 series, the photographer pictured himself as Angela Davis, Martin Luther King Jr., Malcolm X, and other prominent figures.
Following the announcement of an 80% hike in the energy price cap from 1st October, crowds gathered outside the offices of energy regulator Ofgem to protest and declare their intention to undertake a payment strike.