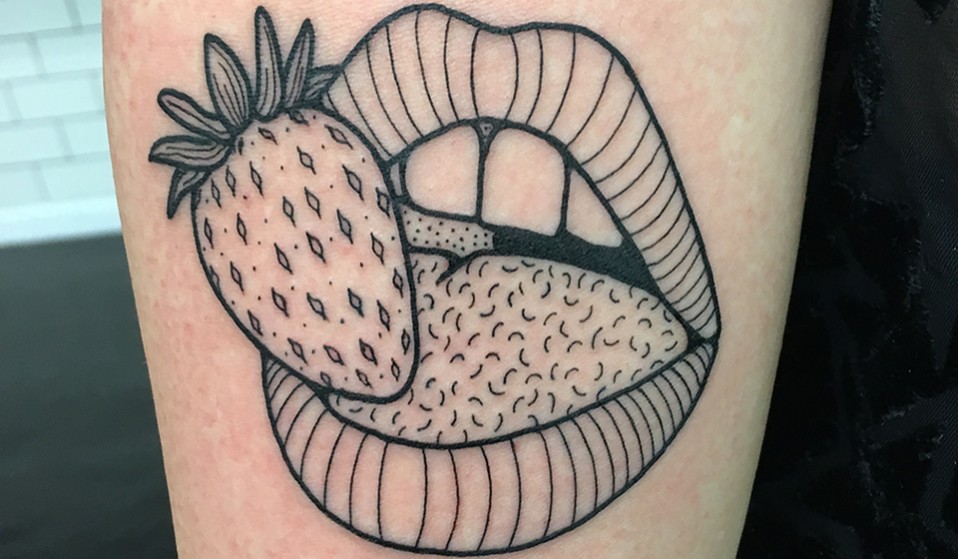 When it comes to queer tattoo culture, the customer isn’t just another blank canvas. This is an empathetic exchange that allows non-conformists to express their identity.

When it comes to queer tattoo culture, the customer isn’t just another blank canvas. This is an empathetic exchange that allows non-conformists to express their identity on their own terms.

I finally got my first tattoo last December. As a queer person of colour, drag has been the primary way for me to express my outsider status.

When I’m in drag, I feel like an Arabian warrior princess – an utterly euphoric transformation.

But drag is an ephemeral medium and I desperately wanted to mark my queer subjectivity permanently.

Finding the perfect artist was a challenge. I visited many shops in London but often left feeling intimidated.

Several parlours are polluted with an overtly masculine sensibility: dominated by straight, white and male artists with heavy metal blasting through the speakers.

A few times, artists I spoke to treated my idea with condescension – “This is how you should do it; I know best, just leave it to me” – while actively ignoring the queer symbolism of the piece.

Without dismissing the extensive knowledge of the artists I met, I was plagued by how some could treat something so emotionally significant – and permanent – with flippancy.

Luckily, a drag queen I know linked me up with the remarkable Jose Vigers. 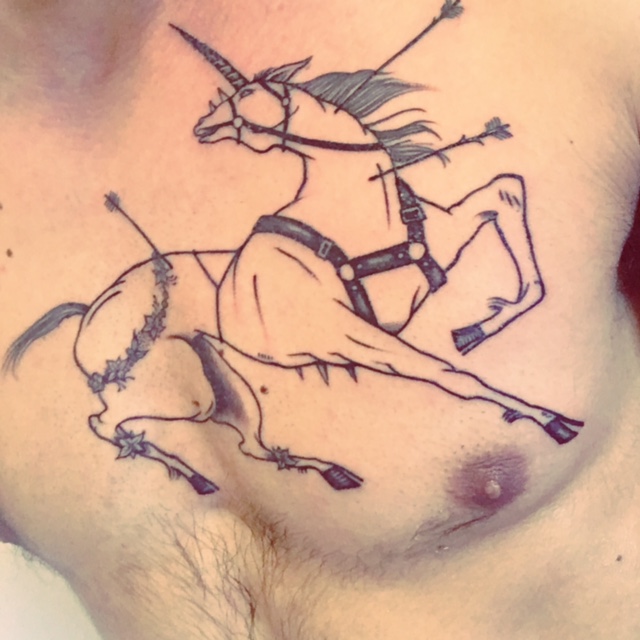 Everything from his process to the imagery he tattoos is rooted in queer politics. Before even discussing drawings, we got to know each other over Skype, allowing Jose to construct a design that would be uniquely tailored to my experiences.

Jose could not have been more gentle and empathetic of my anxieties on the day itself. “Many queer people suffer from mental health issues and, as a tattoo artist, I think it’s important to understand someone’s boundaries so that they’re as comfortable as possible,” he says of his practice.

The shop in question, Stoke Newington’s Sacred Art Tattoos, is run by queer female artist Esther Arocha and has a wholly unique feel to it.

“We really work hard to create a welcoming and safe environment,” says Esther. “The staff at Sacred Art are queer or female, so we have all suffered discrimination, abuse, hate crime… at some point. I think that shapes the way we approach our work and the way we share it with our customers.”

Artistic empathy forms a large part of queer tattoo philosophies; the customer is not simply a blank canvas to be worked on, but part of a ritualistic process that involves communicating emotionally and physically in order to achieve a permanent image.

For queer people, tattoos can serve as much more than ‘body art’. They are an active marker of our identity – a choice to change our body to reflect how we feel. 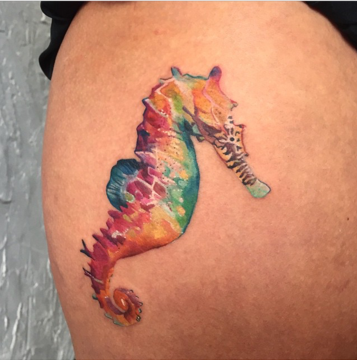 A tattoo by Esther Arocha.

Given that queer people have been subject to so much violence – representational, social, and often physical – there’s something profound about choosing to self-inflict pain on your own terms, dictating how your body is scarred while sublimating it into art.

For transitioning bodies in particular, that’s a significant step. “You’re dealing with real physical and emotional scars,” says Jose, recounting his experiences tattooing transgender men who have undergone chest surgery. “It can be super painful… I have to make sure it’s a safe, comfortable space.”

Queer tattoo artists work against the aesthetics of “mainstream tattooing”. In many tattoo shops, you’ll find artist portfolios hard to differentiate; most include the standard American Eagle, the Japanese-style Koi fish, bio-mechanical gears, black and grey photo-realistic portraits as well as tribal designs.

Emily Malice, a highly sought-after artist with a queer approach to her practice, admits that while she respects the craftsmanship of the tattoo industry, she’s not artistically inspired by normative tattoo designs.

“Doing a standard eagle and rose was never that exciting for me, to be honest,” she says. “I’m very stubborn. I just wanted to make art and find a style that reflected my politics.”

And whenever you see an Emily Malice tattoo, you’ll know it’s hers (see the featured image at the top of the page). Her background as a painter gives her designs a distinct application of colours, while the sumptuous femininity to her work subverts the traditional black-line tattoo on its head. “As a woman, I want my experiences to reflect the designs I give.” 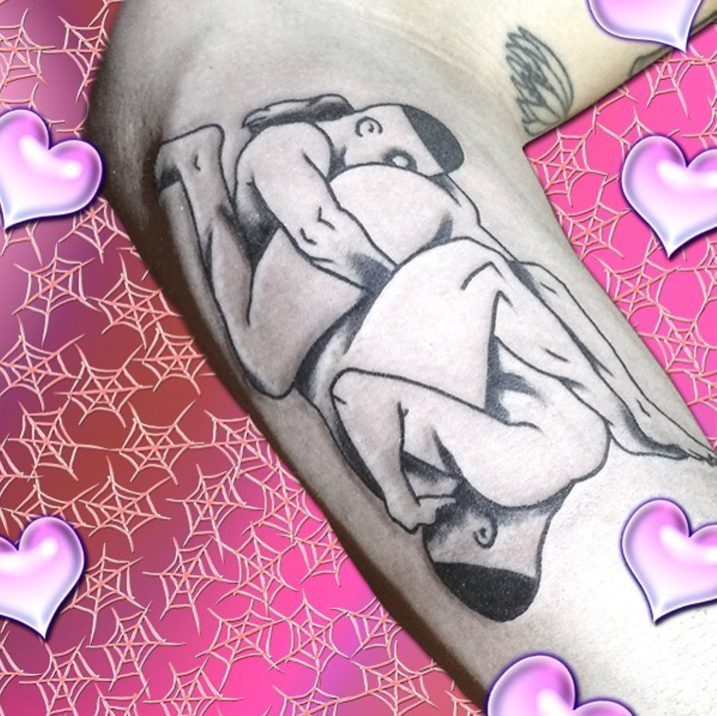 “I have friends who are gay tattoo artists who stick to all the traditional stuff – and it bugs me,” he says. “I’m like, ‘You’ve been given the gift of a queer perspective – why not do something authentic and new?’”

Ashley Cheal, the apprentice at Sleep Well Tattoo Parlour in Romford, says the industry is slowly changing to accommodate artists who don’t have the “traditional” background. He’s encouraged by the rise of “ignorant tattoos” – unconventional designs that make up in personality what they lack in technical proficiency. 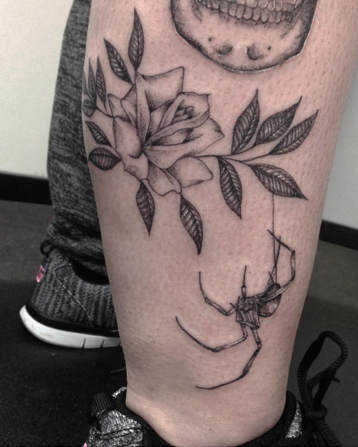 “Working in a straight-dominated job, I feel I’ve been left to my own resources,” says Ashley, whose work includes playful black widow spiders (the anti-patriarchal insect that kills her male lover after mating) and line work that’s as dynamic as it is expressive.

“I’m so lucky to work at the shop I’m at; although all the artists are straight, I’ve been given complete freedom to do what I want.”

Uve Rivera, the apprentice at Sacred Art Tattoos, is also forging a style that reflects their queer intersectional perspective, drawing from a rich canon of queer imagery, whether it’s Claude Cahun artworks or a moving portrait of the queer icon St Sebastian. 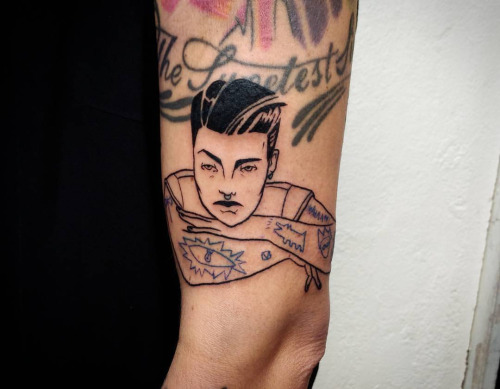 A tattoo design by Uve Rivera.

There is a boldness to Uve’s line work that infuses them with an authentic queer voice. “Getting a tattoo is part of the construction of yourself,” says Uve. “So why would you want to get a design that looks like a million others?”

There is an inherently queer politics to tattoo culture. It’s rooted in rebellion and gives people the chance to dictate their own identities aesthetically.

The artists I’ve spoken to are taking the craft back to its inclusive, countercultural principles and helping non-conformist identities to truly express themselves.

Linkedin
RELATED ARTICLES
OTHER ARTICLES
At his West Bank restaurant, Fadi Kattan established himself as the voice of modern Palestinian cuisine. Now, he’s bringing his innovative, bold flavours to the UK’s capital.
As she gears up for the release of her first book, the 24-year-old climate activist talks standing up to authority and building a more inclusive movement.
Following the release of his debut single, Deyaz talks battling addiction, dealing with his struggles through music, and building a budding music career from his living room.
After blocking the Scottish government’s gender recognition reform bill, Westminster is now devising further changes to the law to make it harder for trans people to self-identify.
A new podcast is opening up the conversation between trans women and trans amorous men in the hope of building coalitions.
A new film from Berghaus traces the story of Adam Raja, who left behind a turbulent upbringing to discover the healing power of climbing.