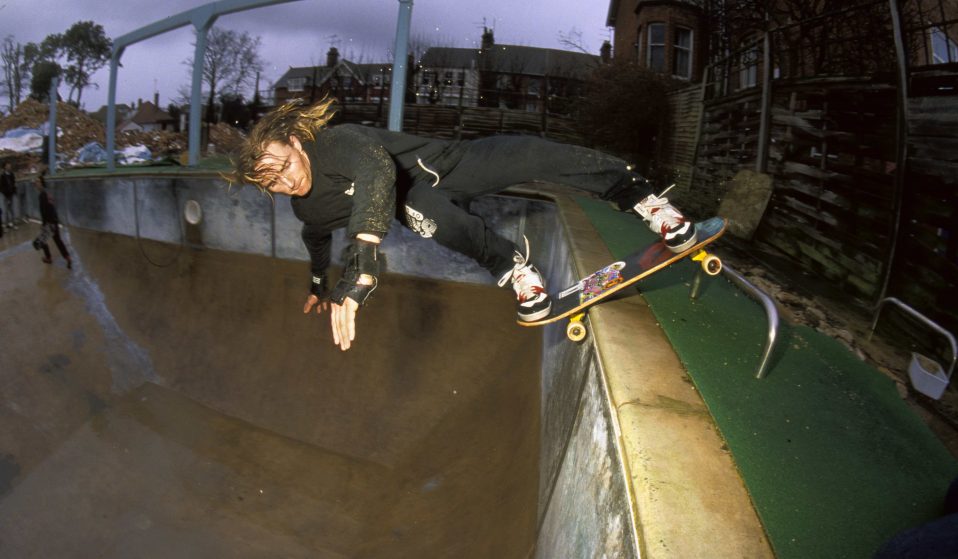 RaD was inclusive, underground and unapologetically British. Almost three decades after it ceased publication, the people behind its success remember its influence.

RaD was inclusive, underground and unapologetically British. Almost three decades after it ceased publication, the people behind its success remember its influence.

If you were a British skateboarder in the late ’80s, early ’90s, then you probably read RaD magazine. Or, its previous incarnation: BMX Action Bike.

For Tim Leighton-Boyce, RaD’s editor, skateboarding was always the primary interest. A photographer himself, he felt that skate photography offered more than its BMX-leaning equivalent. Issue by issue, he began sneaking more skateboarding content into the magazine. “Effectively, we were hijacking a BMX magazine for skateboarding,” he remembers. “It was ironic because we personally knew that experience of being denied coverage… I suppose it was a bit like we cannibalised a BMX magazine.”

Back then, British skate photographers like Leighton-Boyce had few outlets through which to showcase their work. In response, he was looking to create new avenues: before RaD (which stands for READ and DESTROY) he converted a mail-order price list into a skateboarding communication channel.

But gradually, BMX Action Bike began to evolve, with Leighton-Boyce adding more skate content into the magazine via a supplement. Eventually, in 1987, bike advertising began to dry up. Leighton-Boyce saw his opportunity and the title officially became RaD in 1987. 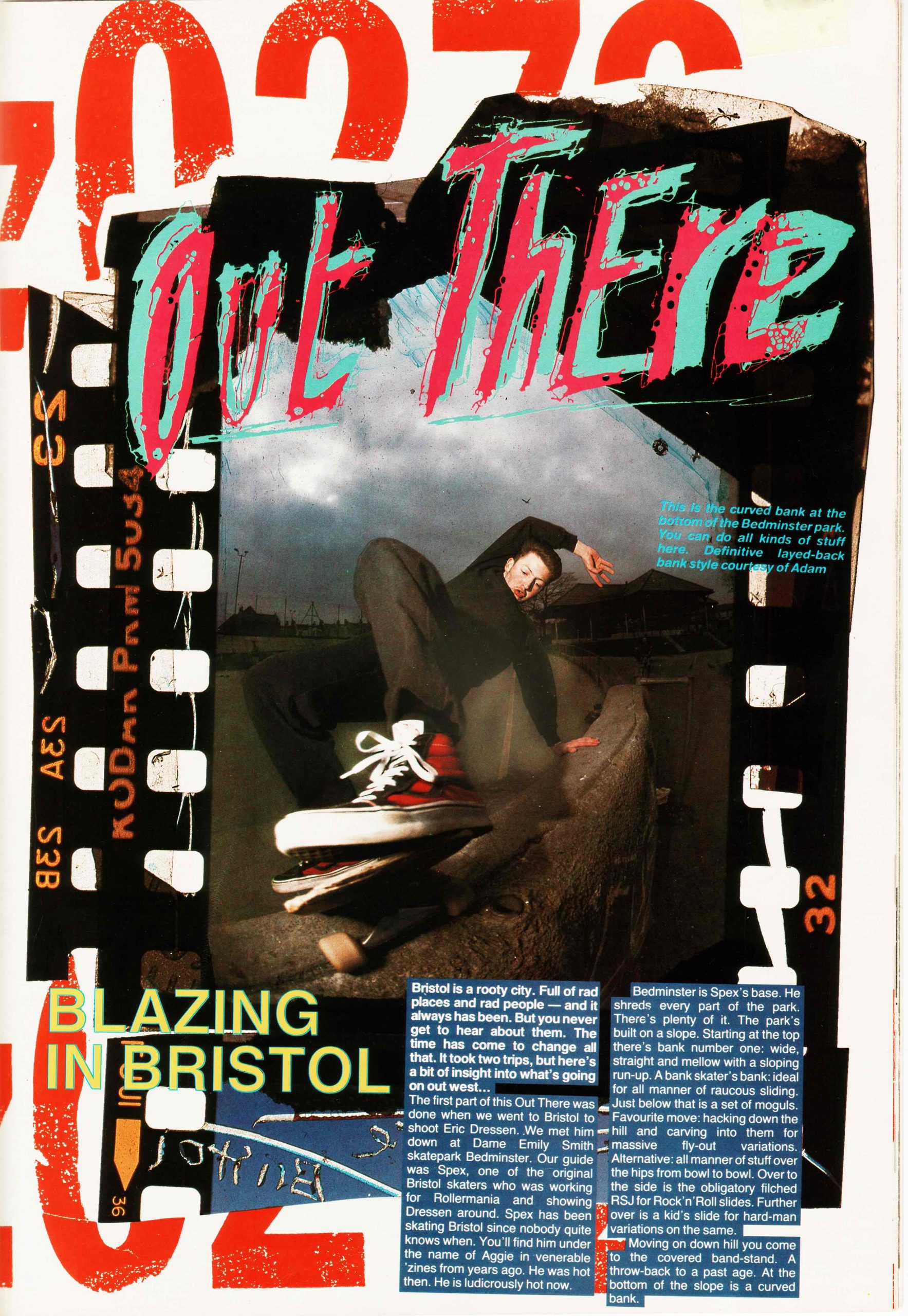 The publication ran until 1995 – following changes in editorship in 1993 – solidifying itself as the UK’s leading skateboarding magazine in the process. They championed up-and-coming UK skaters, capturing them in a way that felt new and radical, while also serving as a contemporary bible for British style and subculture.

According to former Santa Cruz team-rider Crispin Robinson, RaD was fuelled by “dogged commitment, reverent editorial”, and a unique approach to photography and design.  “[Leighton-Boyce] took an experimental and collaborative approach to publishing,” he says. “The result was often more like a zine than a glossy UK magazine.”

Former professional skateboarder Alex Moul remembers the first time Leighton-Boyce turned up to photograph him. They spent the day shooting “a whole bunch of stuff”, although Moul was sceptical that anything noteworthy would ever come of it. However, a couple of issues later, he opened RaD to find a whole eight pages on him. “That was pretty much my start of getting coverage in the magazine – and then my sponsorship with Jeremy Fox and Death Box,” he says.

For Leighton-Boyce, there were a number of ingredients that made the magazine successful. But it was the raw, vibrant and visceral imagery, with an intense emphasis on the UK scene, that he feels made it unique. Central to his editorship was a focus on what was happening outside of London. “We would cover backyard scenes, local spots, car parks – whatever.” 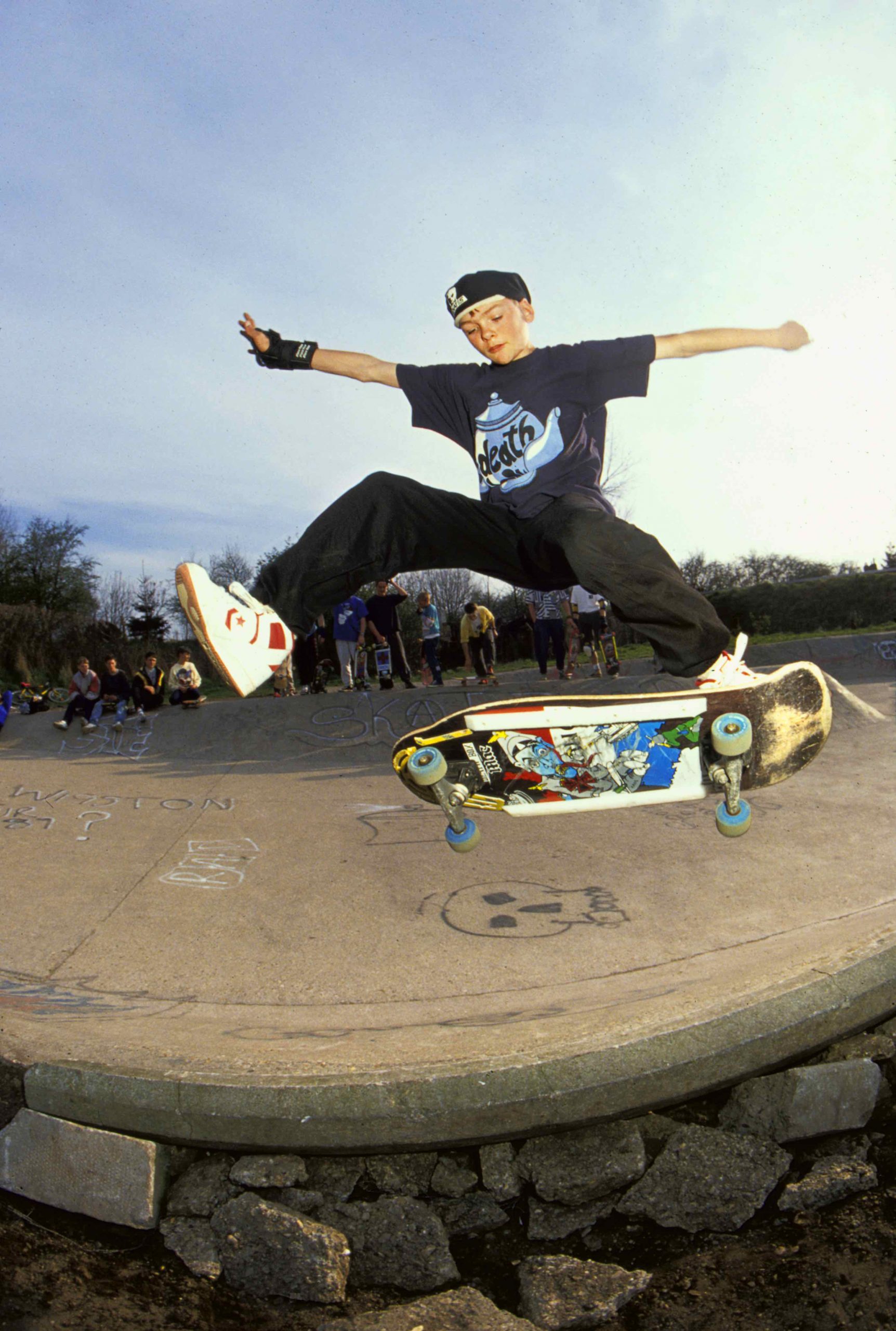 For former pro and RaD mainstay Mike Manzoori, this commitment to smaller scenes also stood out, as did its unapologetic worldview. “The fact [RaD] made it so far and wide, to cover as much as they did, was a miracle considering the funding,” he says.

Back then, distribution issues often meant that by the time US titles like Thrasher or Transworld arrived in the UK, content would be out of date. But RaD could make its way around the UK rapidly. Readers were getting fresh information on their favourite skaters, with stories on areas they could physically visit.

Moul remembers doing exactly that. “We would read the articles, then me and my mates would go and visit that town just to skate a handrail.” Manzoori, meanwhile, puts it more succinctly: “It was ours. Done in the UK, for the UK.”

RaD is remembered by many for having a general lack of theme or structure. Leighton-Boyce argues this isn’t exactly the case. In fact, he says, there was a very specific reference point: the David Bowie track ‘Queen Bitch’. “You do a little lead in, then ‘Bam’, something very rad, then an advert, then ‘Bam’, a really chunky bit in the middle,” he says. 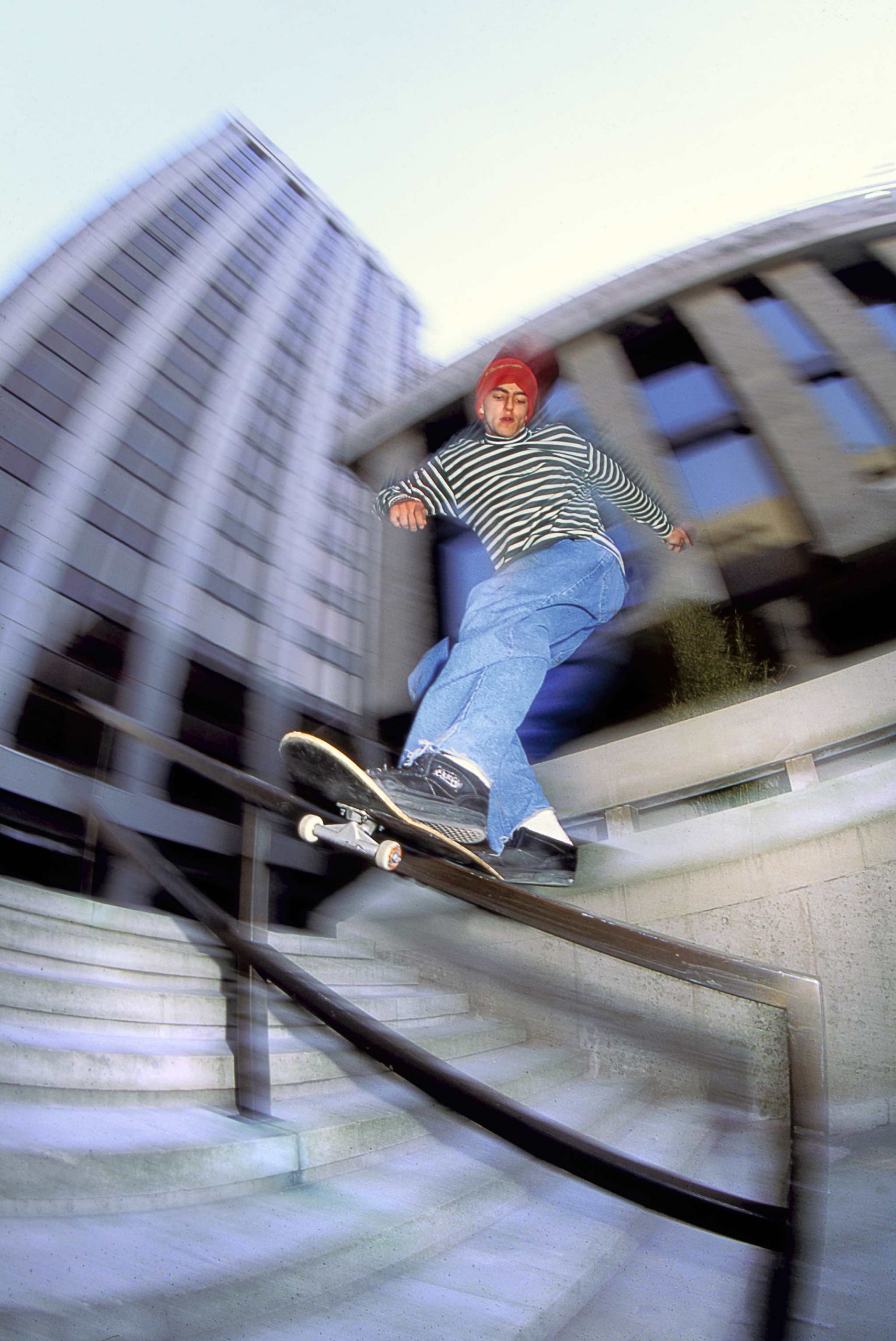 For seminal photographer Wig Worland, RaD was unparalleled in its impact. “[While] there were two other skateboard titles in the UK at the time – Skate Action, which was named after a RaD supplement in BMXAB, and Skateboard! – they were both desperately trying to be RaD in content and design.”

Worland recalls his time contributing to the magazine fondly. “My relationship with RaD began as a hungry freelancer looking for a home for my pictures. I would turn up at the magazine office and bother [Leighton-Boyce] to use my photographs while he was the editor. I then became the Chief Photographer and ultimately the Photo Editor in the very last incarnation of the title.”

Despite its success as a market-leading publication, however, RaD often had to overcome hurdles. Leighton-Boyce remembers how the publishing company would regularly go “bust, then bust again”. After one such instance, the team desperately set to work gathering funds with the intention of buying the title for themselves. But in the end it was sold to another company, who were subsequently closed down. Their assets were sold off to pay back debts – one of which was RaD.

In response, the RaD team started another publication, PHAT Magazine. Gavin Hills joined as Editor, under an agreement with the distributor that it would be a general youth culture magazine. With the tagline ‘Hot Stuff for Hoodlums’, PHAT included articles on video games, music, fashion and more. 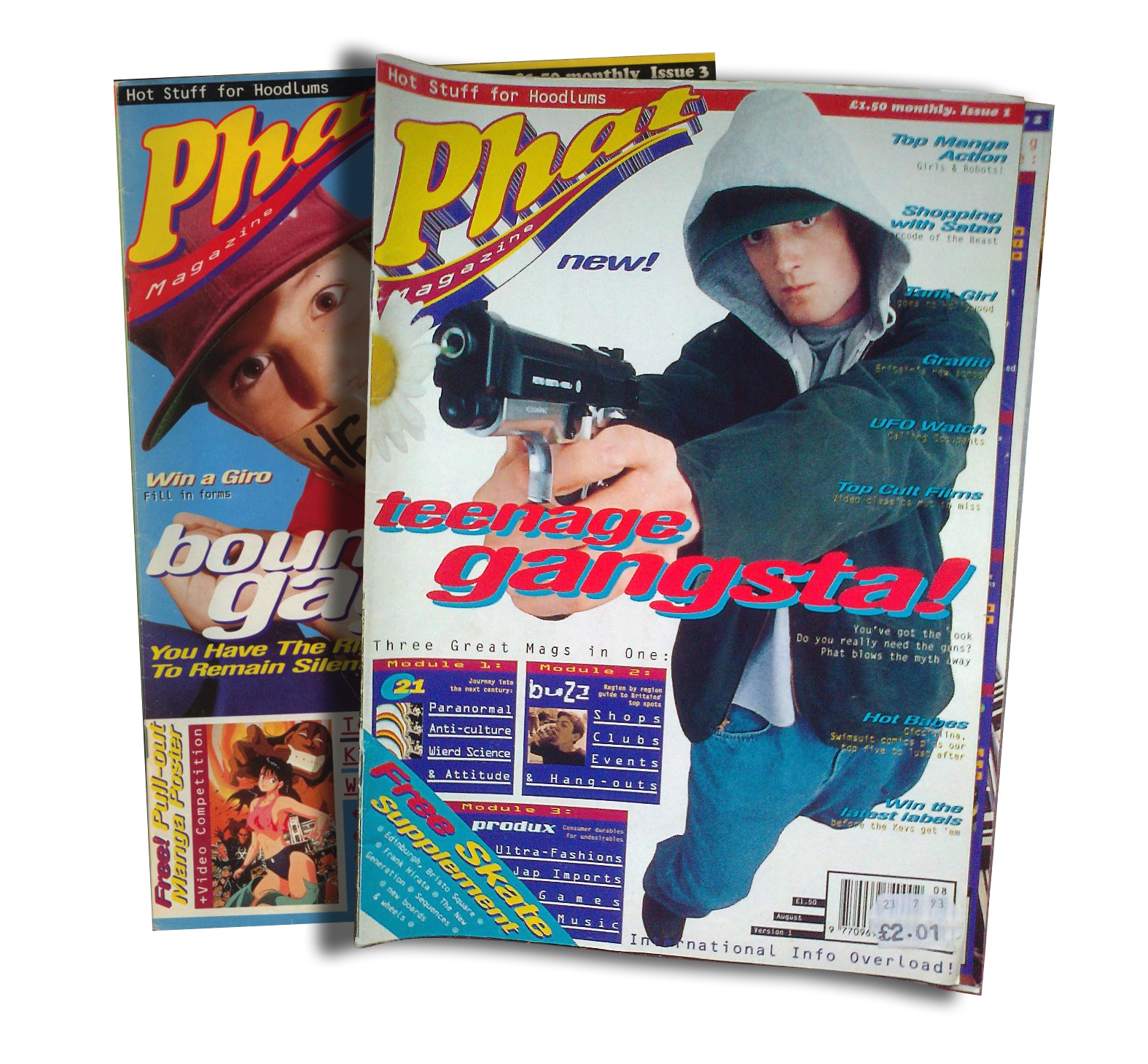 Hills himself was a frequent contributor to The Face and The Idler. The first issue included a heavy skateboarding supplement. “PHAT’s original intent was to do whatever we needed to do to keep a decent skate magazine on the streets of Britain,” says Leighton-Boyce, who took on the role of Publisher after Hills came on-board.

The magazine only ran for a total of three issues, though, before coming under scrutiny from the wider British press after it was perceived to be glorifying violence among young people. Leighton-Boyce recalls running a story on gun culture in hip hop – “a very anti-gun piece” – which saw the Daily Telegraph and The Observer respond with critical articles about the magazine. In December 1993, retailers including WHSmith and & John Menzies refused to stock it, setting the wheels in motion for its demise.

Today, the spirit of RaD lives on through the READ and DESTROY Archive, which features previously-unseen archive photography. Run and curated by skateboarder and ramp builder Dan Adams, who joined RaD in 1991 as a graphic designer, the archive has developed a cult following among skaters and photographers, both in the UK and internationally. One such fan is photographer and North magazine founder Graham Tait. “[It] not only acts as a historic archive into UK skateboarding, it also acts as an archive into UK fashion, architecture, and style,” he says.

More broadly, it has attracted praise from some of the biggest names in the industry, including heralded photographers such as Atiba Jefferson, ex professional skateboarders and artists Bobby Puleo and Andy Howell, as well as Supreme videographer Bill Strobeck . The magazine also received a mention on a recent episode of The Nine Club, a podcast with over 211k YouTube subscribers and more than 50m total views. 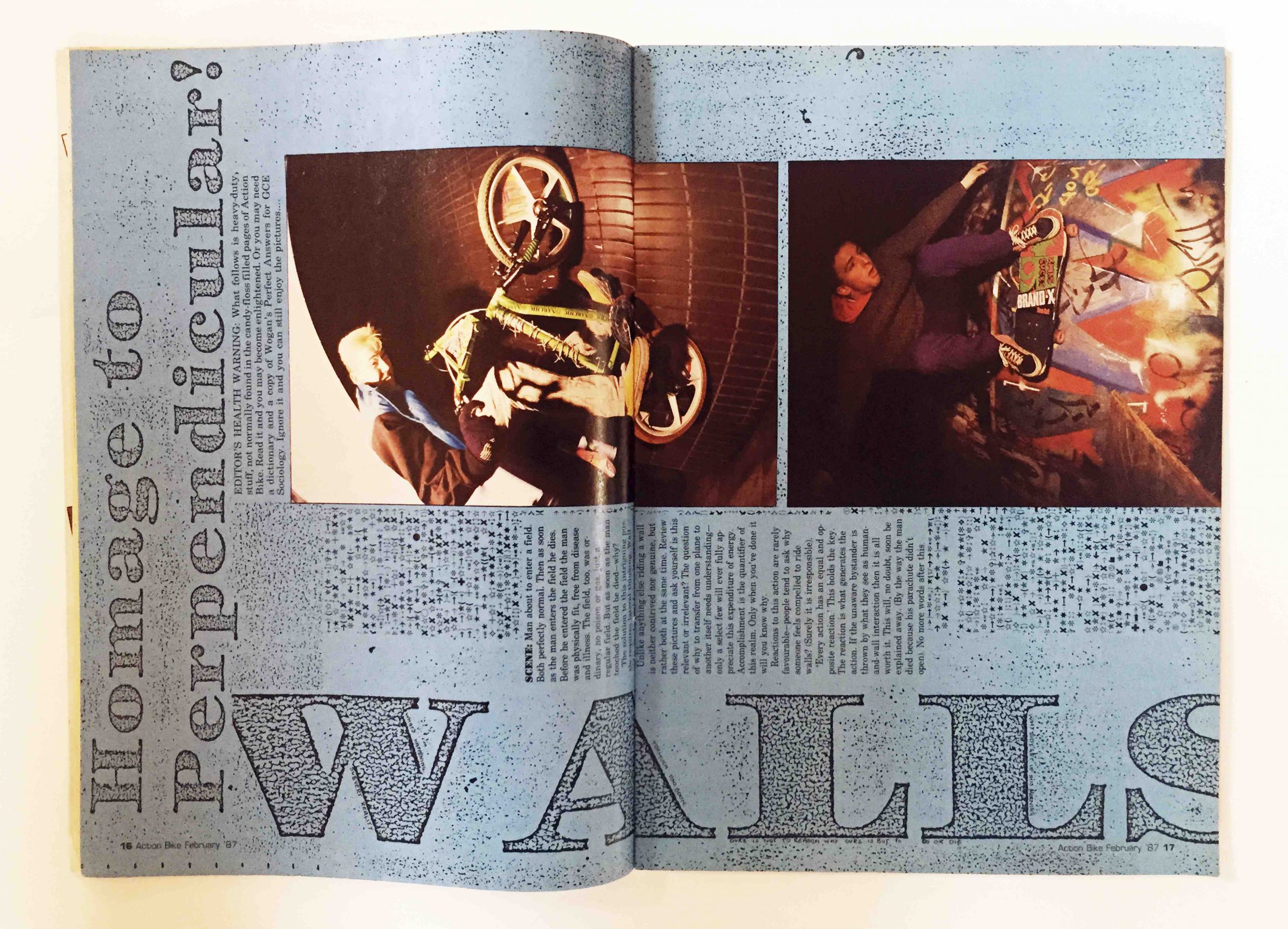 At its peak, RaD was a vital window into the UK skateboarding scene at a time when such lenses weren’t so readily available. Leighton-Boyce recounts doing a whole two-page spread on skate spots up and down the A19 road in the North East of England, which best exemplifies RaD’s commitment to coverage outside of the London bubble.  This type of content, packaged with the best photography and a much-imitated aesthetic, cemented legions of UK skaters as followers for years to come.

“RaD is seminal in the culture because it perfectly captures a time and place in history,” says Worland. “Pre-internet, we all waited for the magazine to arrive on the shelf at the newsagents before pouring over every square inch of a limited number of pages.”

Leighton-Boyce echoes his sentiment. “RAD resonated because we managed to be inclusive,” he says. “It was deeply rooted in the dark underground days but it welcomed new generations of skaters and new forms of skating like mini-ramps and street. It provided a platform for all and a sense of belonging to a very special community.”

Visit the READ and DESTROY archive, where you can support its preservation by purchasing prints.

Linkedin
RELATED ARTICLES
OTHER ARTICLES
Following the release of his latest album, the rapper talks about finding a new approach to songwriting, attitudes to poverty, and why his music is more than a political statement.
Protestors gathered outside Downing Street following the latest atrocities committed by Israel against Palestinians living in the besieged strip.
A new series of photos by Johny Pitts shines a light on communities and subcultures that have all too often been overlooked.
From the chip shops, to the bingo parlors and burlesque dancers, photographer Mike Coles remembers capturing scenes of holidaymakers by the English coast.
The government’s brutal crackdown on NGOs has left victims of rape without anywhere to seek help. And now, as the country plays a key role is Russia’s war, things are only getting worse.
As the Criminal Bar Association enters its fifth week of action, criminal barrister Russel Fraser explains why the legal professionals have walked out and how action is likely to escalate.