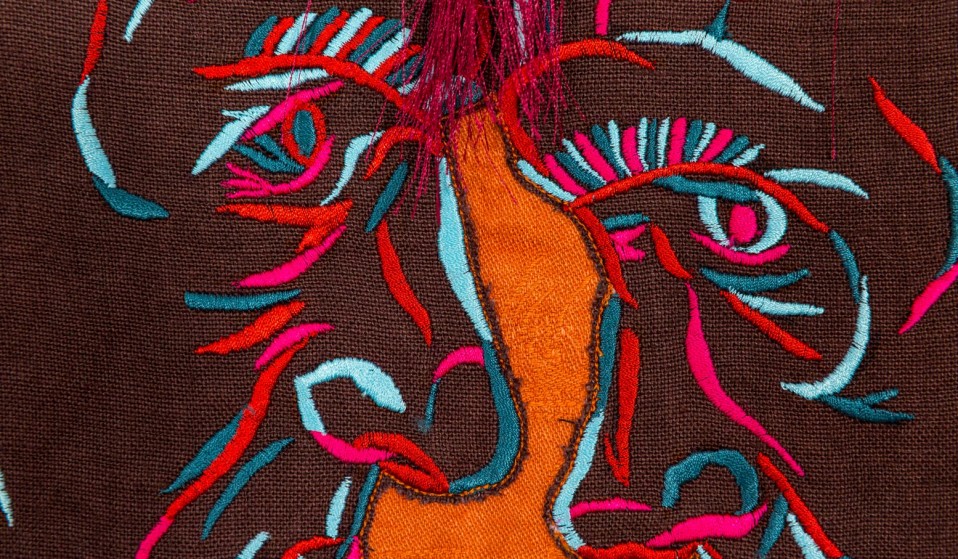 Henry Hussey turned his back on fashion design to find an original voice in textiles. But this isn't your typical ornamental embroidery. This is hard-hitting art.

Henry Hussey turned his back on fashion design to find an original voice in textiles. But this isn't your typical ornamental embroidery. This is hard-hitting art packing all the urgency of trade-union banners.

Imagine seeing disembodied heads and hands, a snake and a bloodied machete, all surrounding a delicately embroidered penis tipped with diamanté.

This is not a Freudian dream sequence. It’s ‘Crescendo’, a piece by textiles artist Henry Hussey.

The 26-year-old’s art is confrontational and complex, layered with various materials and textures – definitely not your standard arts-and-crafts pillowcase needlework. 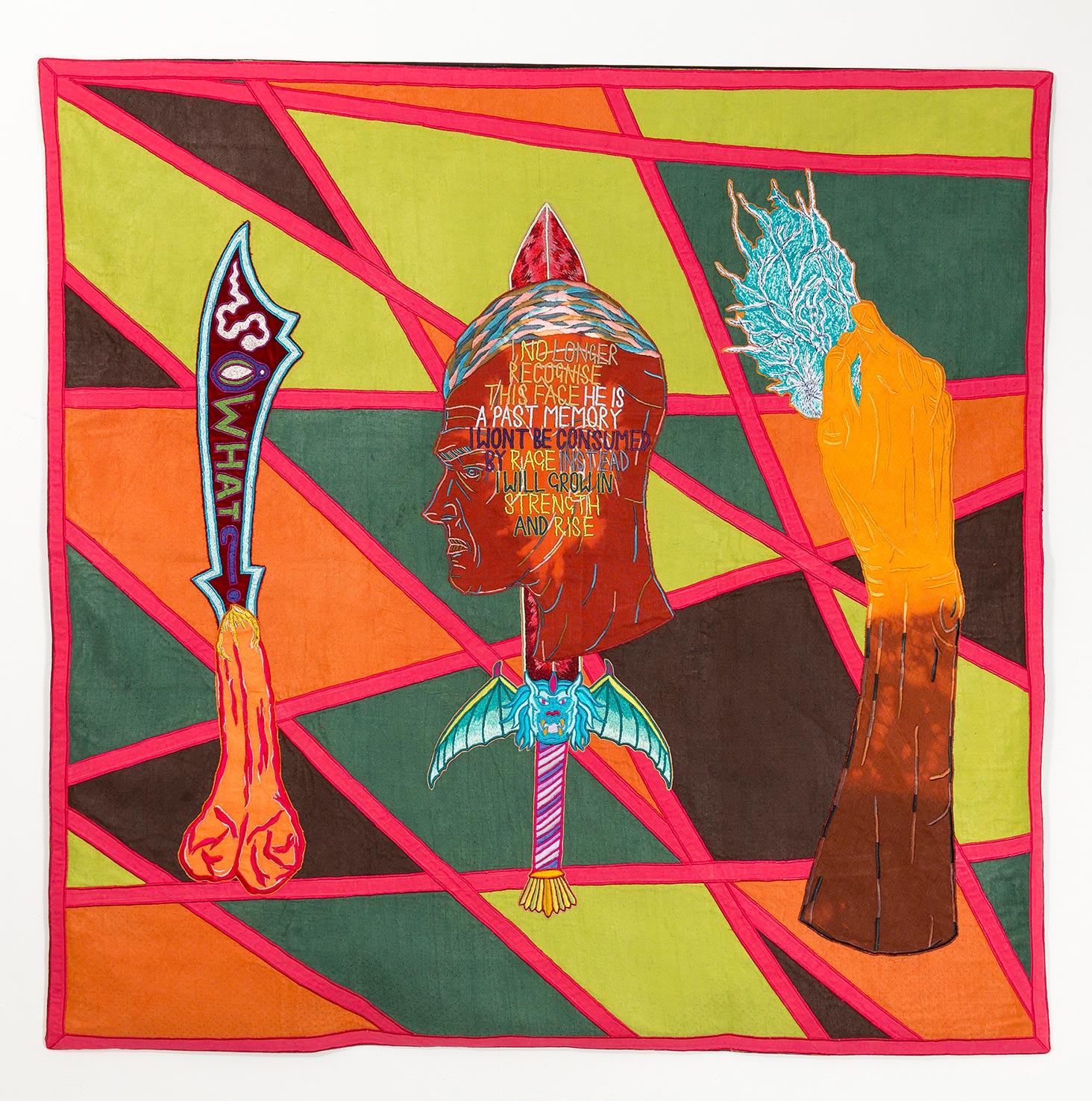 Part of its power stems from Henry’s methodology. He improvises dialogue with actors in order to spark genuine emotional reactions – substance he’ll use to shape his work – as part of a process to rectify past wrongs.

The artist had originally intended to pursue textiles design in fashion only to find his work becoming derivative and stylised.

But while studying a Master’s at London’s Royal College of Art, an encounter with the artist Grayson Perry inspired him to changed tack: switching to fine artwork that deals candidly with personal complexities. [Hussey found out that his father had two families, neither of whom knew of the other.]

Having honed that style into an original voice, the launch of his first solo exhibition, Reliquaries, feels like a perfect opportunity to speak with him about the journey so far. 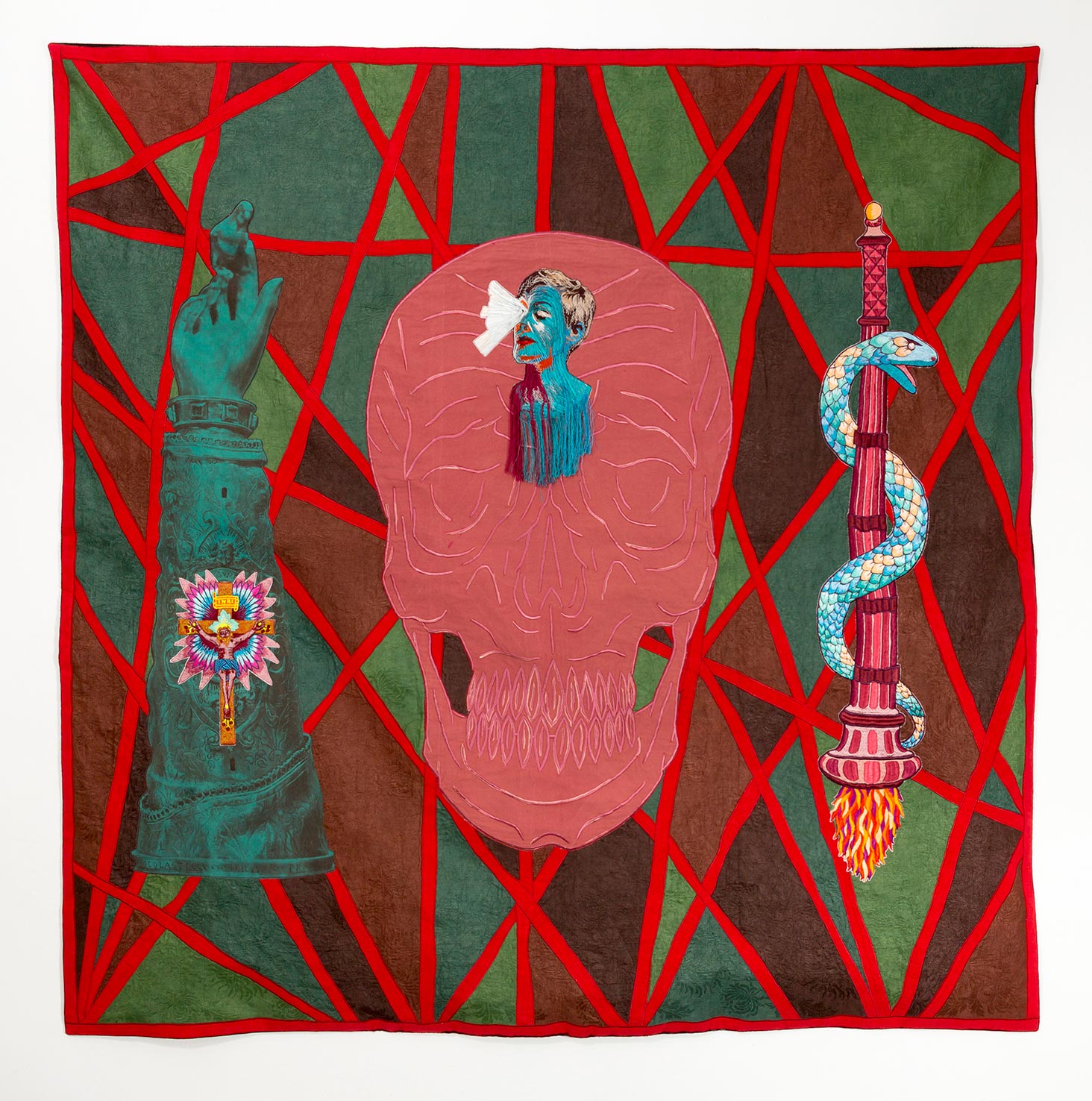 What challenges does trying to break into the art world pose?

One thing that was difficult was having my art taken as fine art, rather than craft. When people think of craft, they think of pillowcases and blankets – very much not fine art pieces. One huge part of separating myself from that was my participation in [Bloomberg] New Contemporaries [a touring platform for fine art graduates].

Overnight I went from being dubiously an arts-and-crafts artist to being purely a fine artist. I’d probably say my work in the medium has been to do with the communication of narrative. My pieces have imposing qualities. I almost equate the textiles with trade-union banners; I enjoy the magnitude they can have. 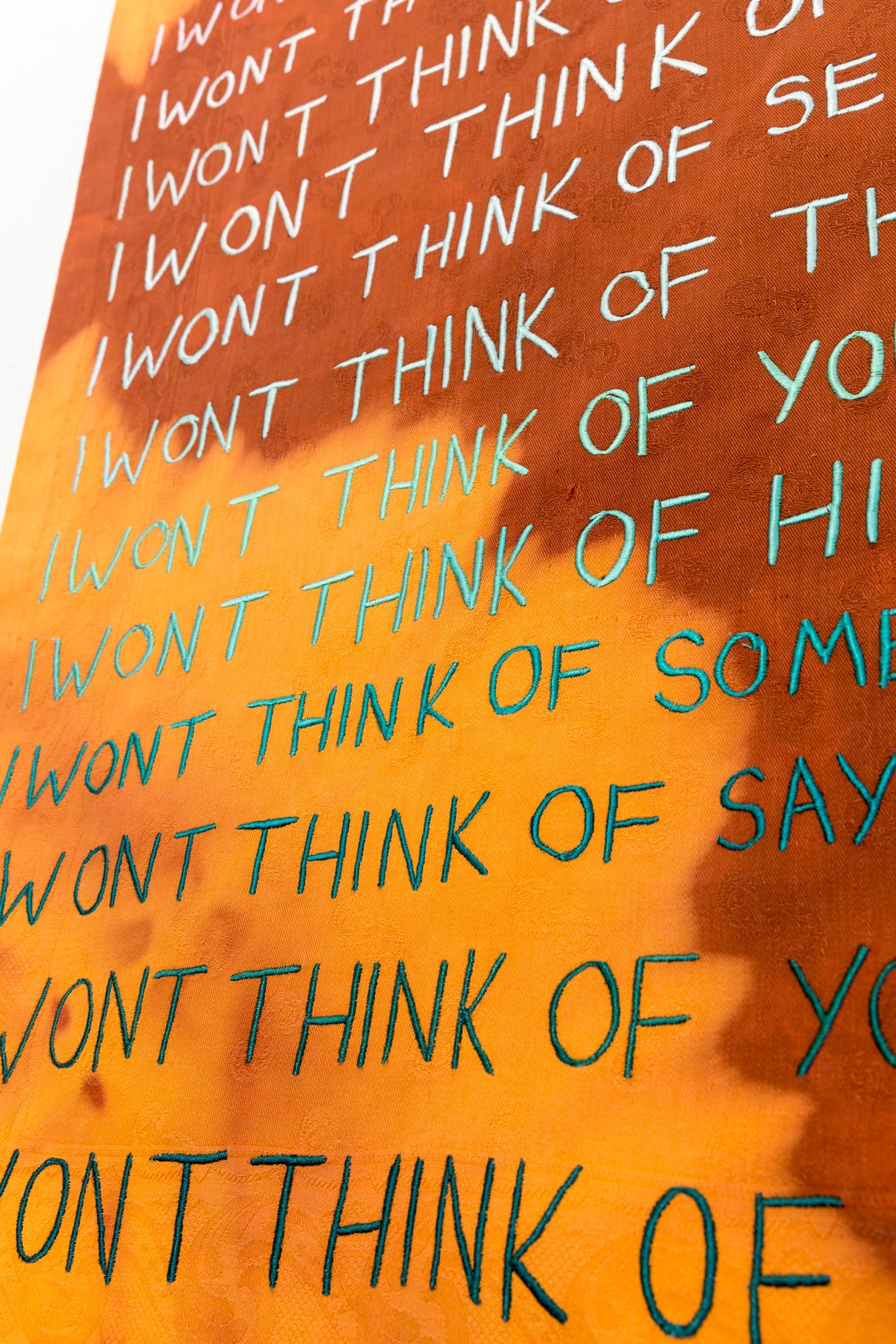 Is there still a sense of craft in your work?
In medium alone. When I think of crafts, I tend to think of something that’s just ‘nice’ and ornamental. My pieces aren’t ornamental in that they’re meant to be striking, drawing the viewer in. They’re meant to be quite hard-hitting, so I don’t find ‘craft’ applicable to my work.

‘Confrontational’ is one word I’ve seen applied to your work a lot. Where does that come from?

I was actually quite quiet as a child… and also in my late teens and early twenties. It was about lacking a voice, so when I found my voice I felt completely reinvigorated. I enjoyed something that I could just hang onto. I enjoy volume; I enjoy being loud; I enjoy having a presence. I’ve very much been motivated by that – and trying to project it. 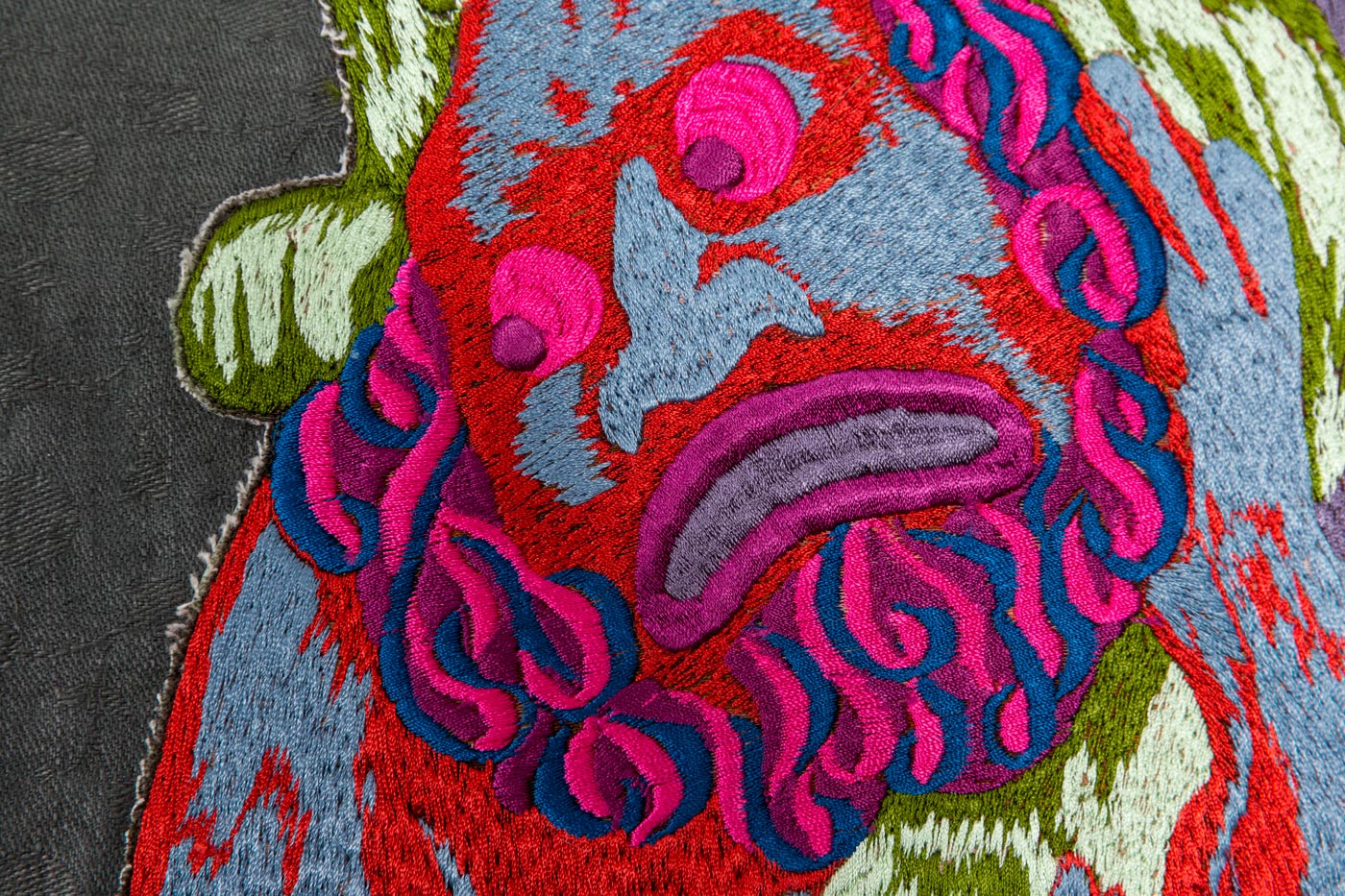 How do you balance the personal and political in your work?

I’d say it’s a bit of a meeting point. It came about when I realised that if I made work purely about myself or personal matters, it would get to a stage where I’d reach a dead end. I’d go from being poignant to whiney and I didn’t want to do that. I realised that for my work to stand in a social and political atmosphere, I had to engage with wider issues – not just my own, but societal matters.

How does your creative process work?

It tends to start with an initial drawing, though really I have to take a couple of steps backwards. I don’t think you can fake emotion and a big thing for me in my work is not being stylised or vacuous. Rather than me just trying to paint ‘sadness’ or ‘anger’, I’ll do a performance piece with an actor. I’ll just be with them in a room and have a rough skeleton script of the things I want us to discuss and the points I want us to hit. I’m able to capture genuine emotion which then lays the foundations of my project. 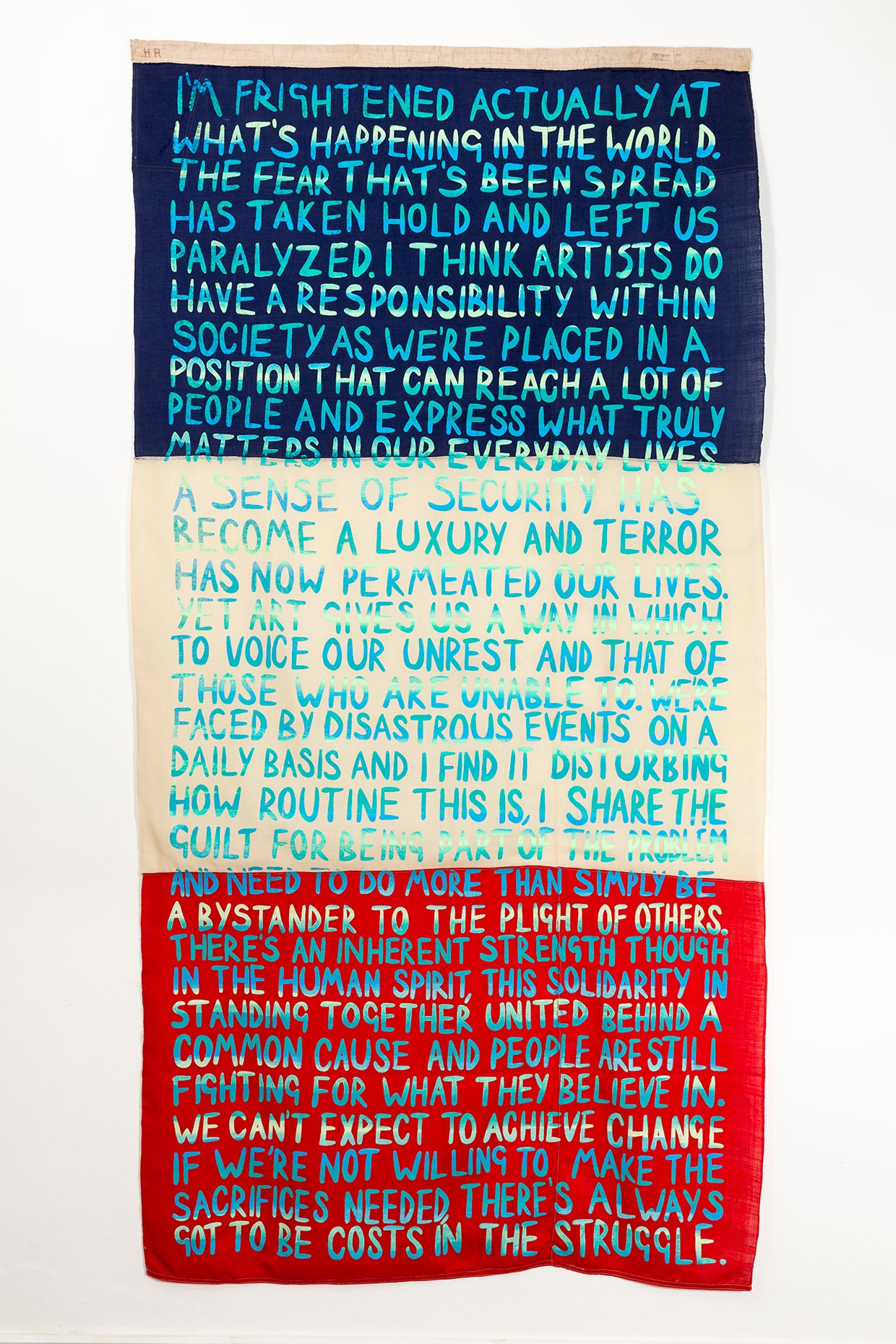 For my last project, I worked with Maxine Peake. To see how she expressed her emotions, how she expressed pathos, was hugely rewarding. When I make my work in response to that, I’ve got that genuine emotion to [draw from]. As the process goes on, I can bring in different words, different symbols, dyeing, textures, so they become very multi-layered pieces. I enjoy the process of building them up over time.

You’ll do a scene for personal development, too? It’s interesting to think of you ‘looking in’ on your own emotions as someone else performs them.

It’s almost an extraction process. The fact is that I could be sitting in a room for days just looking at the wall. I know that there’s emotions inside me, but it’s sometimes difficult to get them out. By having an actor perform, it becomes a sort of emotional sounding board – helping to get those emotions out of you. 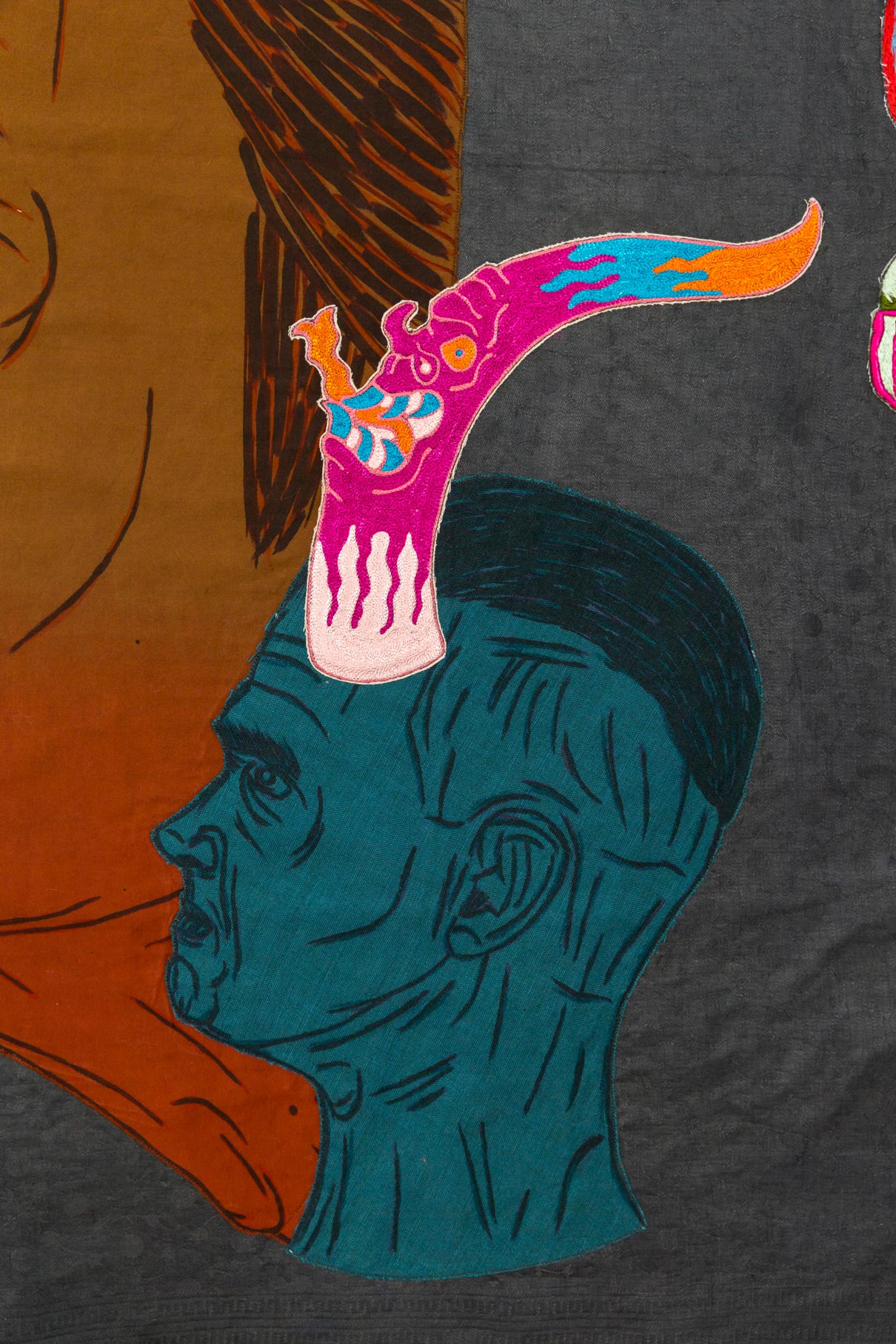 Find out more about Henry Hussey. Reliquaries will be showing at London’s Coates & Scarry between 12 and 30 July.

Linkedin
RELATED ARTICLES
OTHER ARTICLES
Last week, Tower Hamlets council removed its nudity-restricting licensing conditions in a huge win for London’s kink community.
With the UK now set to run out of vaccines, people working in the sex industry – particularly outside of major cities – have been left especially vulnerable, reports Brit Dawson.
As the Criminal Bar Association enters its fifth week of action, criminal barrister Russel Fraser explains why the legal professionals have walked out and how action is likely to escalate.
Following the release of his latest album, the rapper talks about finding a new approach to songwriting, attitudes to poverty, and why his music is more than a political statement.
A woman from Texas explains how she was forced to consider the criminal liability she might face for medication abortion over her health.
A series of photos by the late Jerry Dantzic taken in 1957 show a tender side to the iconic Jazz musician.