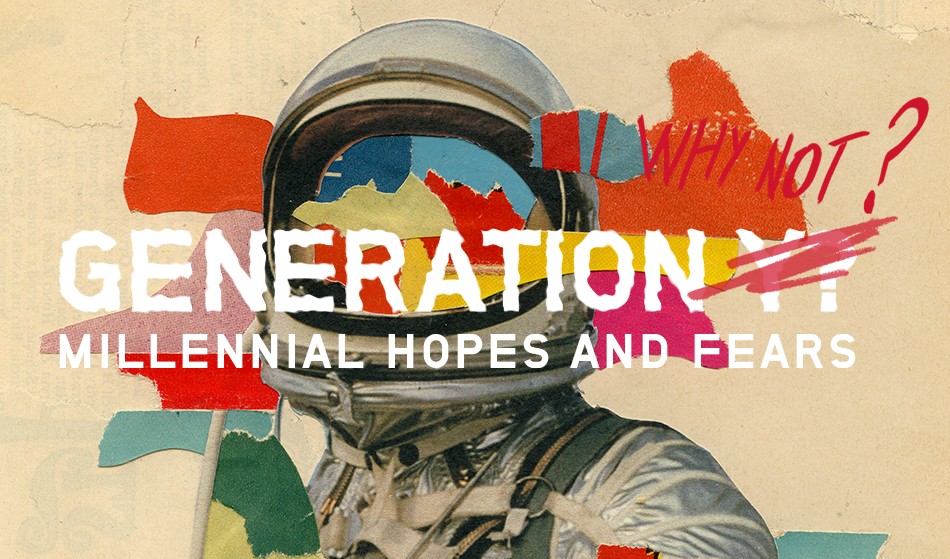 We've spent all week contemplating our fears. Here are two more reasons to be hopeful.

We've spent all week contemplating our fears. Here are two more reasons to be hopeful.

We’ve been facing our fears all week on Huck – and, if we’re honest, it’s been pretty cathartic. As a generation, we’re living through a perfect storm of financial breakdowns and broken systems that’s yet to play out in full. Let’s face it – things are cray! When debts are high and opportunities are low, the only guarantee is that the future is unknown – leaving us plagued with a torrent of anxious questions; where will we live, how will we work, when will we find fulfilment?

But there is a flipside, too. Because problems, in a funny way, are just breeding grounds for solutions.

So in the spirit of eternal optimism – the only state of mind that ever changed a goddamn thing – we reached out to two experts on the frontlines of social change, known collectively as The Future Men, and invited them to walk us through our deepest, darkest fears.

Ed Gillespie and Mark Stevenson are both future ‘possiblists’, drawn together through their respective work in cultural change, as well as an inspirational and occasionally irascible belief in building a better tomorrow. In part one of this series, they showed us how we can recycle water from thin air and give corporate interests a run for their money by bandying together to create greener marketplaces for cheap, sustainable energy.

But what’s their take on our next two anxious thoughts?

3. Will all flights be banned to save the planet from overheating?

It’s certainly true that aviation is one of our most impactful activities when it comes to carbon emissions and climate change. But this also depends on how you slice the carbon cake. Globally, aviation is only responsible for around three per cent of carbon emissions. But that is because the vast majority of the world never flies. For those that do, flying is probably the biggest single element of their carbon footprint.

Major innovations in low-carbon flight are in the pipeline, but many are still a long way off. Planes are already light-weighted by using carbon fiber laminates. Engine efficiency is constantly improving, but the best promise for low-carbon flight in the foreseeable future is low or zero-carbon biofuels. These are unlikely to come from sources that displace food crops from agricultural land. More sustainable options might include using a process called pyrolysis to produce aviation fuel from household waste.

There’s no doubt about it: flying is an important activity, but perhaps an indulgence that should be used wisely until we can crack the fuel issue. We’d love to see the return of commercial airships using helium to float effortlessly into the sky. We’re already seeing prototypes coming into service for possible freight transport, so maybe holiday dirigibles are not far off?

4. When do we reach the point of no-return, climate-wise? Will we stop destroying the planet before it’s too late?

It’s never too late! A senior climate scientist once said, “Every tonne of carbon that doesn’t go into the atmosphere alleviates future human suffering.” That said, scientists do warn us of ‘tipping points’ beyond which increasing amounts of carbon dioxide in the atmosphere might heat and shift our planet into unstable states that may not bode well for civilisation. The problem is that scientific facts tend to wash over us, and don’t compel us to act. We’ve had this evidence for decades now.

In truth, we already have most of the technological solutions we need, from solar panels to electric vehicles. The challenge is scaling them quickly enough. We also have enough money. What we need to overcome are the social, cultural and political barriers. We need to change our minds, be future optimists, believe in better and make the change happen.

Another hope is removing carbon dioxide directly from the air. Mark sits on the advisory committee of the Virgin Earth Challenge, a competition launched in 2007 by Richard Branson. The $25 million prize will go to whoever can satisfactorily demonstrate scalable and sustainable ways of removing greenhouse gases from the air. (Scrubbing carbon dioxide from the air isn’t a new idea. We’ve been doing it for decades in closed environments like submarines to keep the air breathable.) It’s one of the world’s best-kept secrets but these technologies are coming online in the next twenty years and once we reclaim that carbon, we can put it to use, e.g. by making fuel (as Audi are already doing by making diesel from the air).

‘Sky mining’, as we call it, could become the ultimate recycling story: providing sustainable liquid fuels that could be the aviation solution we’re looking for. The likely timescale to market of such fuels, according to the Royal Society of Chemistry? Ten to fifteen years. And it’s not just fuel we can make from the sky. California-based Newlight Technologies has developed the snazzily named AirCarbon, a plastic made from oxygen, carbon and hydrogen captured from the air, which the company claims competes with oil-based plastics on price. In July 2015, they announced they’d received an order for 8.6 million tonnes of the stuff. Ed’s company Futerra is also working with Covestro in Europe who are accelerating similar ‘plastic from the sky’ solutions.

Stay tuned for part three of The Optimist’s Guide to Tomorrow.

Linkedin
RELATED ARTICLES
OTHER ARTICLES
A new podcast is opening up the conversation between trans women and trans amorous men in the hope of building coalitions.
A new law change is enabling Britain’s donor-conceived children to know the truth about their origins – but campaigners say the fertility industry must do more to protect people.
After blocking the Scottish government’s gender recognition reform bill, Westminster is now devising further changes to the law to make it harder for trans people to self-identify.
Activists and campaigners are fighting back against new laws that would seriously undermine the ability to take industrial action, calling it an attack on fundamental workers' rights.
As she gears up for the release of her first book, the 24-year-old climate activist talks standing up to authority and building a more inclusive movement.
Since 2007, Gideon Mendel has made 20 trips to document floods in 13 countries. The result is an alarming record of what has already been lost to the climate emergency.