Art & Culture / The renegade medic saving both soldiers and civilians 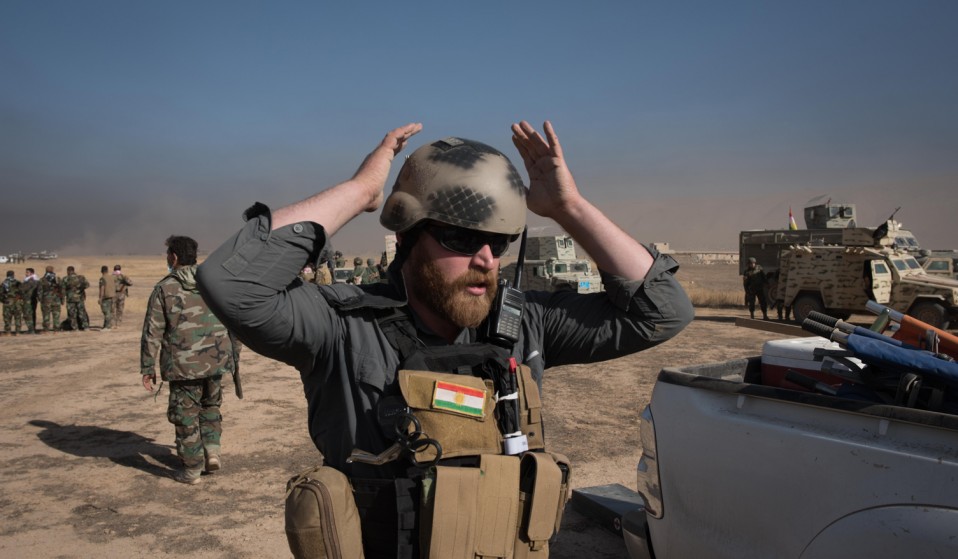 After landing in Iraq, former marine Pete Reed went rogue and set up his own war-zone clinics. Now he faces a new challenge: not letting the system win.

After landing in Iraq, former marine Pete Reed went rogue and set up his own war-zone clinics. Otherwise they simply wouldn’t exist. Now, while struggling in the vacuum of a failed system, he faces a new challenge: not letting that system beat him.

Pete Reed’s blood-spattered combat boots stand out among the business shoes and sneakers worn by other aid workers.

It’s a mid-November afternoon at the UN compound in Erbil, northern Iraq, where a far-flung collection of humanitarian aid organisations is searching for a solution.

The goal? A medical response to the military campaign currently driving Islamic State out of Mosul, 80 kilometres to the west.

Most of those gathered are desk workers but Pete, an American medic, has come straight from a rudimentary field clinic, where he’s spent a week treating trauma patients just behind the frontlines. He hasn’t even changed out of his filthy fatigues.

“I probably smelled terrible,” Pete recalls today. “I thought it would be good to bring some reality to the meeting.” 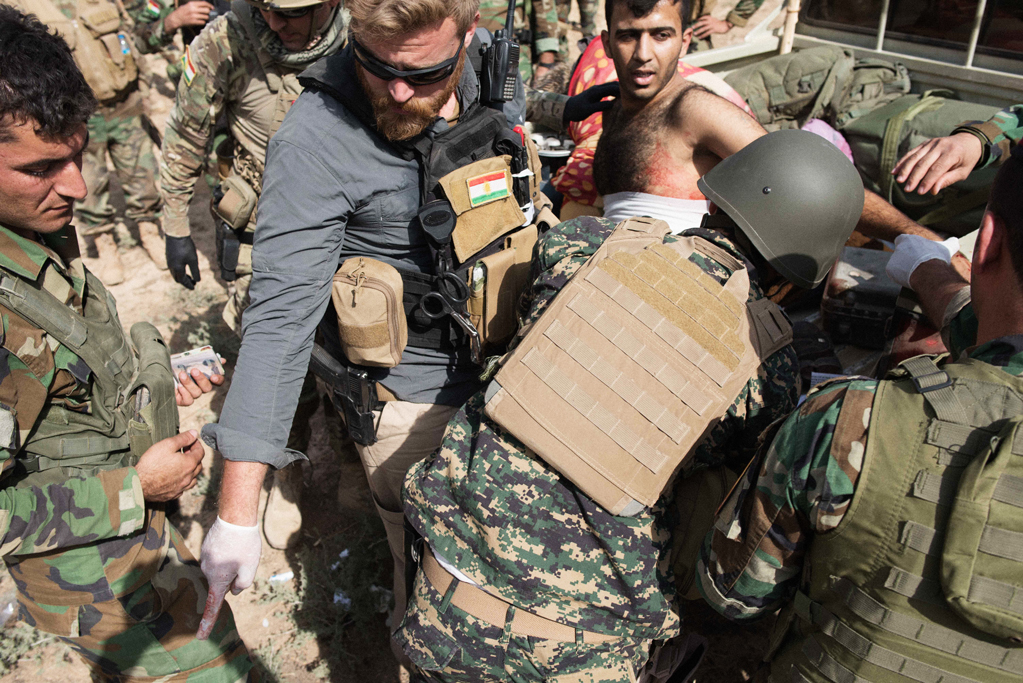 The 27-year-old two-time Afghan war veteran had a point to make. Between the dozens of international NGOs in Iraq, and the millions of dollars in funding they’ve amassed, there were no other medical teams operating within a 40-minute drive from the frontline.

That delay in medical coverage costs lives, says Pete. “I was pretty pissed off by the lack of response by everyone else.”

In the midst of a global crisis precipitated by the war against Islamic State, Pete saw a systemic failure across the humanitarian sector. So he stepped in to try and make a difference.

A renegade with an outsider attitude, Pete soon found himself embroiled in the very system he was trying to sidestep.

After leaving the marines in 2011, Pete bounced through jobs until landing as a ski instructor in Wyoming. But he missed the sense of purpose that he’d enjoyed in the military, and came to Iraq in November 2015 with the hope of taking up arms against ISIS.

He quickly found, however, that Kurdish and Iraqi forces had little use for foreign volunteer fighters. Pete, who had been a medic in the corps, decided to switch tack. Seeing how woefully ill-prepared Iraqi forces were in responding to battlefield injuries, he began offering medical training.

When the military operation to retake Mosul began in October 2016, Pete and a misfit group of volunteer medics cobbled together a mobile clinic with scrounged supplies.

Without waiting for permission, they entered the fray, treating wounded soldiers and civilians alike, often with bullets flying overhead.

After nearly eight months of fighting, Iraqi Security Forces finally retook Mosul in July. The cost of the battle has included thousands killed, many more injured and over 900,000 displaced from their homes.

Over 5,000 patients have passed through the clinic Pete runs in conjunction with Iraqi special forces; they’ve seen everything from children’s limbs being severed by shrapnel to soldiers vomiting blood after being exposed to chemical weapons.

And while Pete’s original crew members have long since returned home, they’ve been replaced by new volunteers who have flown in to help. 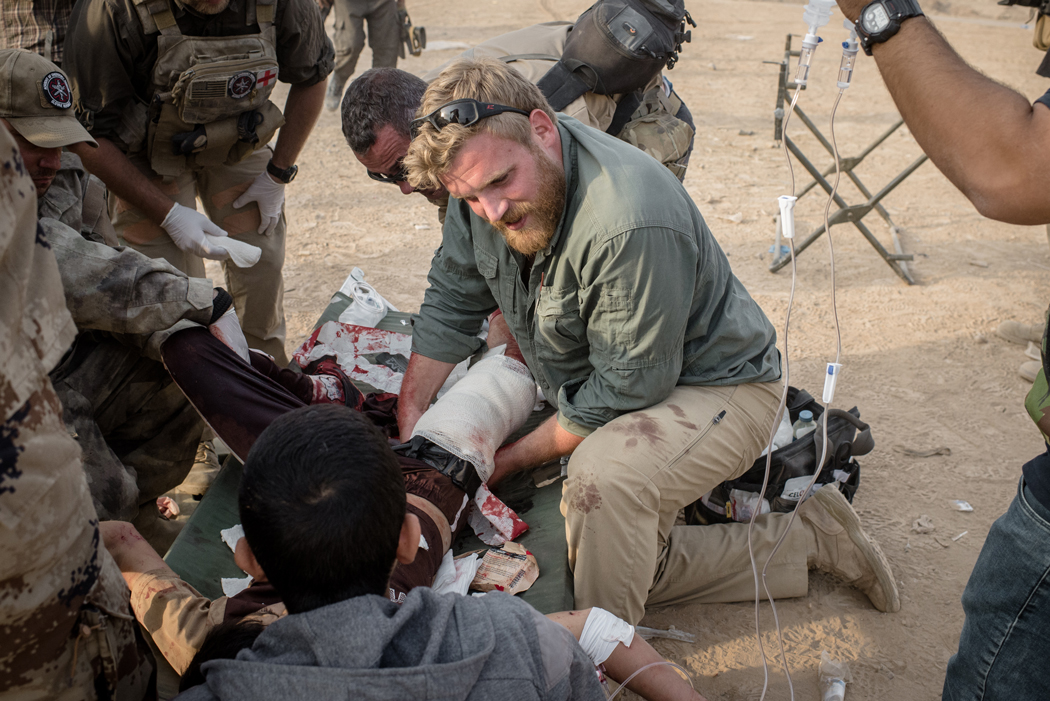 Pete is not in Mosul when he meets with Huck in mid-June. He’s at home in a half-finished housing development in Erbil, writing to-do lists on the villa’s front window with a whiteboard marker.

Deep in personal debt, Pete’s waiting to hear whether a promised tranche of funding has been approved. Taking a moment to reflect, the medic lights a cigarette and sits back on the couch, one of the few furnishings in a largely empty house.

After surviving on private donations, Pete is now running his own NGO – Global Response Management (GRM) – and fighting for his share of the funds being donated to established humanitarian organisations.

“Before that, everything was beg, borrow, steal – for months – with the occasional private donation or a company sending us a shipment when they read an article about us,” he says.

He still has text messages from a US military officer who demanded that he stop canvassing organisations for medical supplies. Sometime after this, overawed by the scale of the crisis, Pete decided to go legit, forming GRM in February.

“We knew that we couldn’t keep operating forever on a hope and dream,” he says. It’s been a rough transition. “I did a full-on, face-first dive into the pool of bullshit that is the international aid community,” Pete says. “I went from treating patients to treating people’s agendas.” 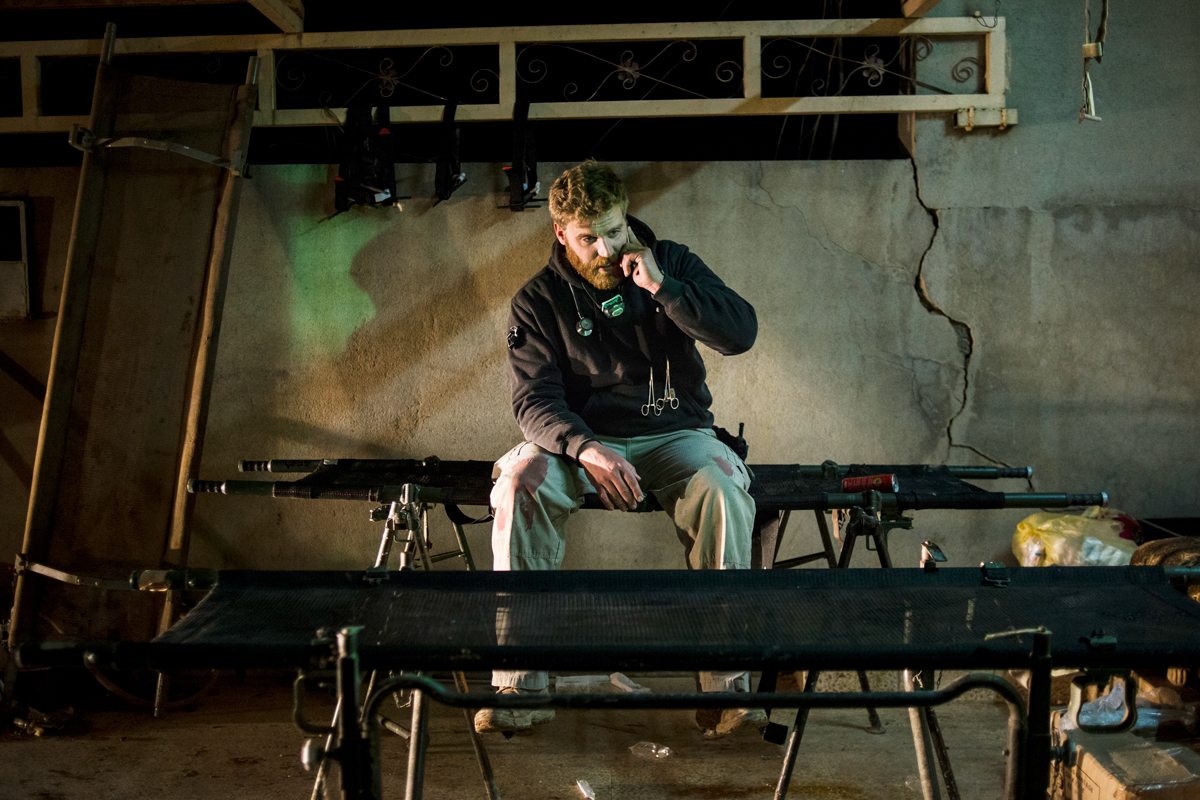 In March, GRM signed its first contract to provide frontline medical care to injured civilians. Now, in mid-June, they’re over halfway through the project but have so far only received three per cent of the funding.

“I was told that 10 days after the contract was signed, we’d get money,” he says. “That was 34 days ago.” The hold up is bureaucracy, Pete believes. “That’s inherent in the NGO system,” he says. “Bureaucracy is just a nice way of saying ‘bullshit excuse’.”

As a newcomer to the humanitarian industry, Pete was ignorant of its accounting and accountability practices. He had to learn rapidly, going from administering intravenous fluids and painkillers to writing budgets and collecting receipts.

It irks him that he’s doing this rather than saving lives, leaving him with the impression that he’s being played “like a fucking fiddle”.

While waiting for funds to come through, Pete has struggled to keep the clinic running. GRM has taken on around $100,000 of debt, he says, and he owes $33,000 personally.

But despite the perilous financials, Pete is determined to continue.

“You can’t just shut up shop one day and say, ‘Sorry we can’t treat your son today, we didn’t get funding,’” he says, stabbing out his cigarette, clearly ready to return to his to-do lists. “That’s insanity.”

Linkedin
RELATED ARTICLES
OTHER ARTICLES
To mark the anniversary of the mass trespass of Kinder Scout, a group of hikers came together with the intent of creating a new, fully inclusive culture for rural spaces.
Photographer Robin Graubard’s debut book offers an unflinching record of turbulence and change across the Balkans.
Photographer Phyllis Christopher recalls capturing sex and protest at a time when the city had become a haven for the queer community.
The author discusses her blistering new novel about history, revolution and queer love.
New legislation is set to make it more difficult to hold Israel accountable for its human rights abuses.
The situation in Afghanistan remains dire, with many groups facing persecution at the hands of the Taliban.