Art & Culture / Revolting: Why nothing is off limits in satire 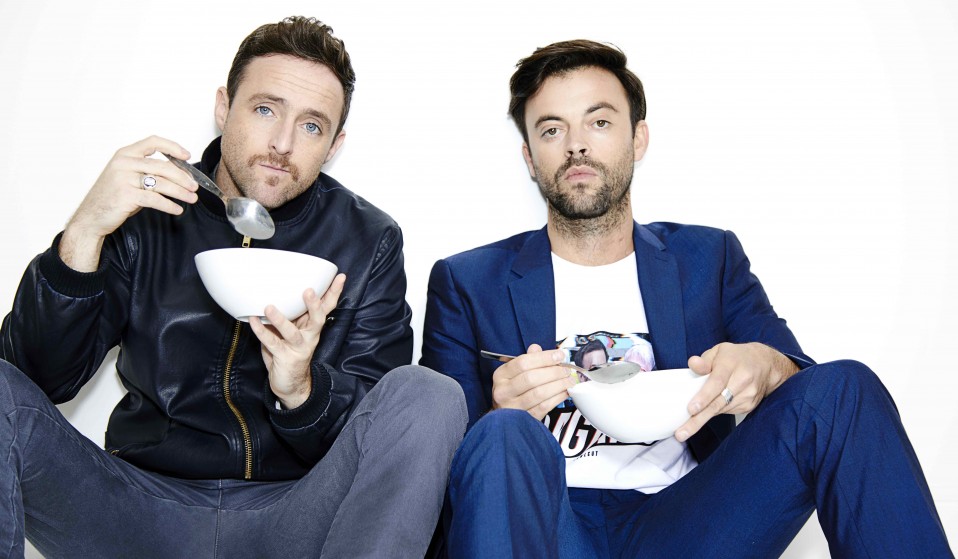 Jolyon Rubinstein and Heydon Prowse's brand of character-led satire cuts through the bullshit of 2017, and they're taking on all sides of the political spectrum.

Jolyon Rubinstein and Heydon Prowse's brand of character-led satire cuts through the bullshit of 2017, and they're taking on all sides of the political spectrum.

When Jolyon Rubinstein and Heydon Prowse started out with their DIY stunts, digging up MPs gardens, little did they know their new brand of character comedy activism would have them scheduled on prime time TV. Their BAFTA winning show The Revolution Will Be Televised saw the pair take politically charged characters into a real world setting, taking viral-style sketches to impressive new heights.

Their latest series, Revolting, blends characters with sketch comedy, continuing to target the most pressing issues of our generation with a menacing smile. It might often feel like there’s not a lot to laugh about right now, but these two see the power in poking fun with no holds barred. 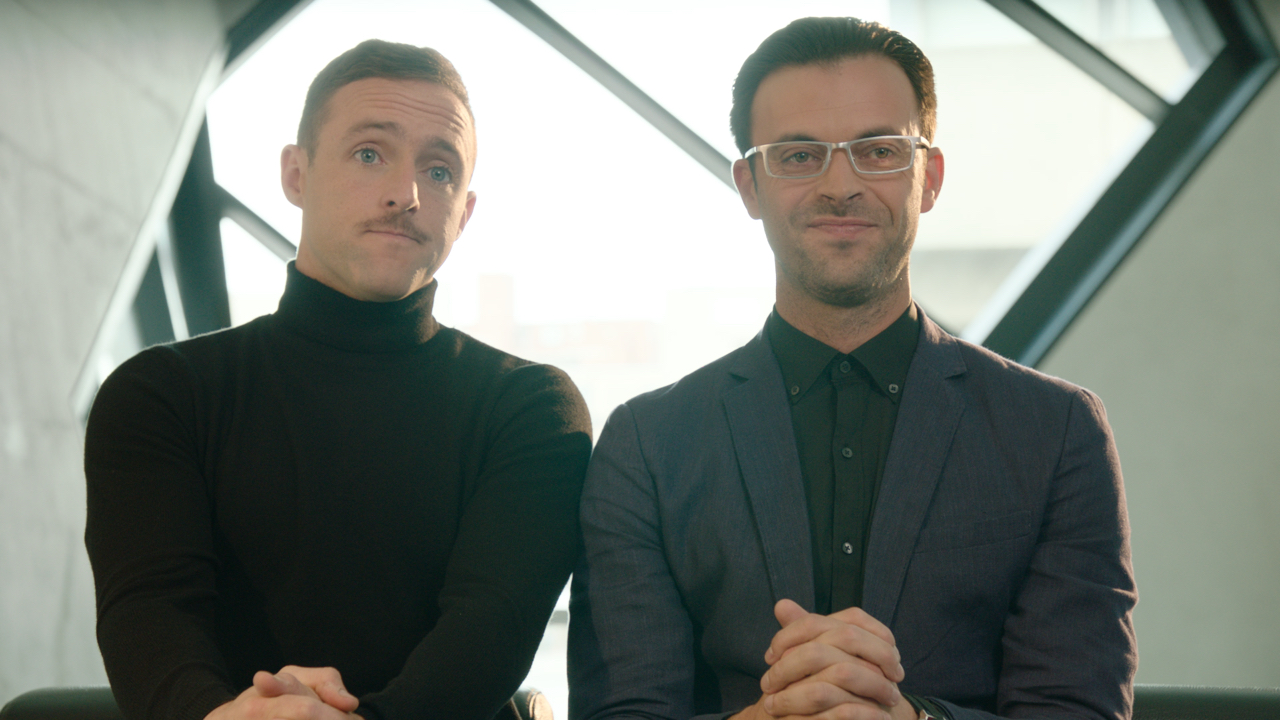 How did you guys get started? Where did you meet?
Jolyon: We went to school together, he was in an amazing school play called the Ragged Child, and he actually spat right in my face during it.

Heydon: Then we went to university togehter, but I fucked around for two years, but we ended up doing our final year at the same time. Jolyon went on to Drama Centre, and I came to work here for Don’t Panic. We set up a magazine, it was 2006/7 and everything was about content and the internet and creating. The magazine never did that well, but the films did, these stunts on bankers and MPs.

Jolyon: You got Alan Duncan sacked! Heydon wore a secret camera into Parliament and caught Alan Duncan MP chatting all manner of rubbish, and it ended up on the front page off the Telegraph. Heydon was on Newsnight, on the Today Programme, it was a heroic act.

The turnaround time with web is so much faster than TV, and you’ve got no commissioners to impress, no scheduling. You were doing this right at the start of the Youtube era.
Jolyon: I think that we rode the wave of this exponential growth in the internet 2.0

Heydon: It was also the expenses scandal and the financial crisis, everything changed suddenly. In 2007/2008 everyone was like ‘oh shit, life’s great’, we were all apolitical. Palestine, Iraq and Afghanistan were the only issues people cared about, and even then it wasn’t everyone.

It took Iraq to really get people animated, before that people weren’t too bothered. Then the financial crash happened, and then the expenses scandal. Suddenly everyone flipped, everyone was angry. We capitalised on that, we wanted to create something to channel it.

Jolyon: I think you’re being too modest actually, this was before I was involved, but the amazing part was the way you captured the history of British satire, in your face, calling a spade a spade. It’s very against British boundaries, social conventions, pleases and thank-yous, knowing your place. It was punk, it was angry.

Did it take time for people to engage with your style of comedy?
Heydon: That’s the thing, going to fuck up MPs’ gardens was pretty punk. We had loads of meetings with TV companies and nothing really took off. We kept trying to make stuff through current affairs.

In 2010 Yahoo wanted us to promote their election coverage, so we’d film Jolyon going out and asking people which constituency they were from, or who their local MP was.

“Will you vote for them anyway? Yeah.”

Jolyon: It was funny though, because it divided people. Some really liked it, and some thought it was really mean. It was a bit of a precursor to a lot of what we then did.

How do you pick who to take on in the show?
Jolyon: Heydon actually put it well the other day in an interview. Satire isn’t about targeting the left or right, it’s about hitting it plum centre. People, whether from one perspective or the other, can see some truth in what you’re saying and get on board. We are so polarised in our echo chambers: ‘fuck you if you’re on the right, you’re on the left’. But most of the time you can learn a lot from the other perspective.

You’ve caused a bit of controversy with one sketch in the new series, the Real Housewives of ISIS. When did you decide nothing would be off limits to you?

Jolyon: I don’t think there was ever a “decision” because that’s what’s important, it has just been our attitude from the very beginning.

Heydon: But to be fair we have been doing this for six years now and we’ve never done anything on Islam. We’ve done stuff on Israel, done stuff on pretty much every nomination of Christianity, we’ve done everyone, and the Islamic State in 2016 was a pretty big story.

Jolyon: In the same way that if I did a sketch about the KKK, it would not be making a statement about Christianity, it’s important to remember this isn’t an attack on Islam. Doing a sketch about Daesh and women who of their own conscious volition who have decided to go over there, not the children that were just groomed, which is an absolute tragedy, is something that is important to face in our culture. I think that’s satire’s function; to look at a taboo square in the eyes and say “Boo”.

We’re prepared to talk about it and that’s the rich history. Now, is there a climate of Islamophobia in this country? undoubtedly in the right wing press, but this sketch was specifically about a death cult, and nothing to do with Islam.

What did you make of the reaction?
Heydon: I got some serious hate from my ultra lefty friends. This one guy who I know through the work I do with refugees literally said this” “Really lazy use of stereotypes in your show you fucking middle class wanker.”

Jolyon: I think the most important thing is to say is we’ve done this sketch about the tragedy of grooming, the fact that vulnerable people have been taken advantage of, they’ve been sold a lie.

There’s a genuine point here, which is should any issue be off limits? Someone tweeted me saying “Oh my god what’s next? FGM?” and I replied saying “just look at series 3, there’s FGM in that one”. Like I said, no sacred cows, everything has to be on the table, and that is what’s great about Great Britain. We get to talk about these issues and hopefully challenge those notions.

Revolting continues on BBC2 this Tuesday at 10pm. catch up on the series on the BBC website.

Linkedin
RELATED ARTICLES
OTHER ARTICLES
Photographer Melanie Nissen recalls capturing the characters, fashions and rarefied chaos of a rapidly-expanding set of punk bands who helped to redefine the genre.
The New York MC reflects on his experience with Trumpian US immigration policy, and how it impacted his career.
Ahead of the policing bill reaching its final stages in the Lords, protestors came together to rally against the legislation.
In 1984, Martin Shakeshaft set out to document the miner’s strike as it really happened, using his photography as a tool for activism.
Those set to be impacted by the governments ’undemocratic’ bill explain why it risks silencing them.
With abuse of call-centre staff on the rise, many are now speaking out about the hostility they’ve faced.