Art & Culture / Rocks is a quiet, revolutionary film about life in London 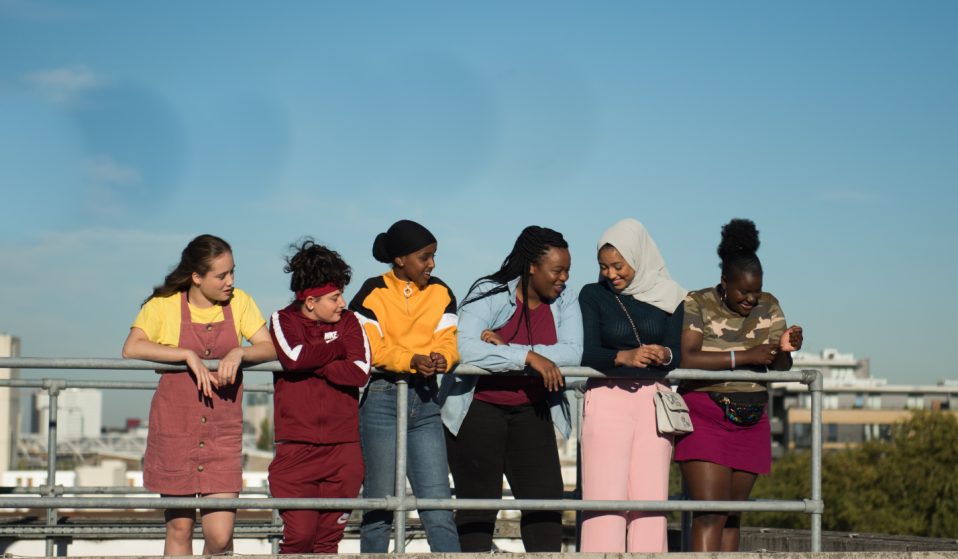 On and off-screen best friends Kosar Ali and Bukky Bakray on growing up in East London, and why diverse stories are as vital as ever.

On and off-screen best friends Kosar Ali and Bukky Bakray on growing up in East London, and why diverse, multi-layered stories are as vital as ever.

If Rocks had been released earlier in 2020 as intended, it would have signified a milestone in British cinema. Now, rolling into the world nearly six months later, at a time where fear, regression and violence has risen to new heights, this story about a loving ensemble of teenage girls from diverse backgrounds wields a new type of power.

Set across East London – from the heaped stalls of Ridley Road market to the flash, vacant new builds on Old Street roundabout – Rocks is a collaborative effort from a group of female creatives. This includes director Sarah Gavron (Suffragette, Brick Road), co-writers Theresa Ikoko and Claire Wilson, and a legion of local schoolgirls, who lent their experiences to the story.

At the heart of Rocks are best friends Sumaya (Kosar Ali) and Shola, also known as ‘Rocks’, played by Bukky Bakray. When Shola is abandoned by her mother and left to care for her younger brother, the pair’s relationship faces new challenges, though their love for each other never falters.

Rocks and Sumaya are an extension of Bukky and Kosar, both East London teenagers embedded in their community and family life. Since wrapping the film, they have maintained a loyal friendship. They spoke with Huck about their mutual admiration, and the revolutionary power of Rocks.

You both live in East London, how did it feel to film in a place that you’re so familiar with?

Kosar: It makes you appreciate East London more. There are places that I would usually just drive past with my mum and not pay attention to, but now, for example, I see a work of art in Shoreditch, and I realise how beautiful it is.

Bukky: It’s what helped me to identify with Rocks. These are the places that are home to me, and that I walk through with my friends, so I wasn’t just identifying with the character of Rocks, but with her scenery and surroundings. 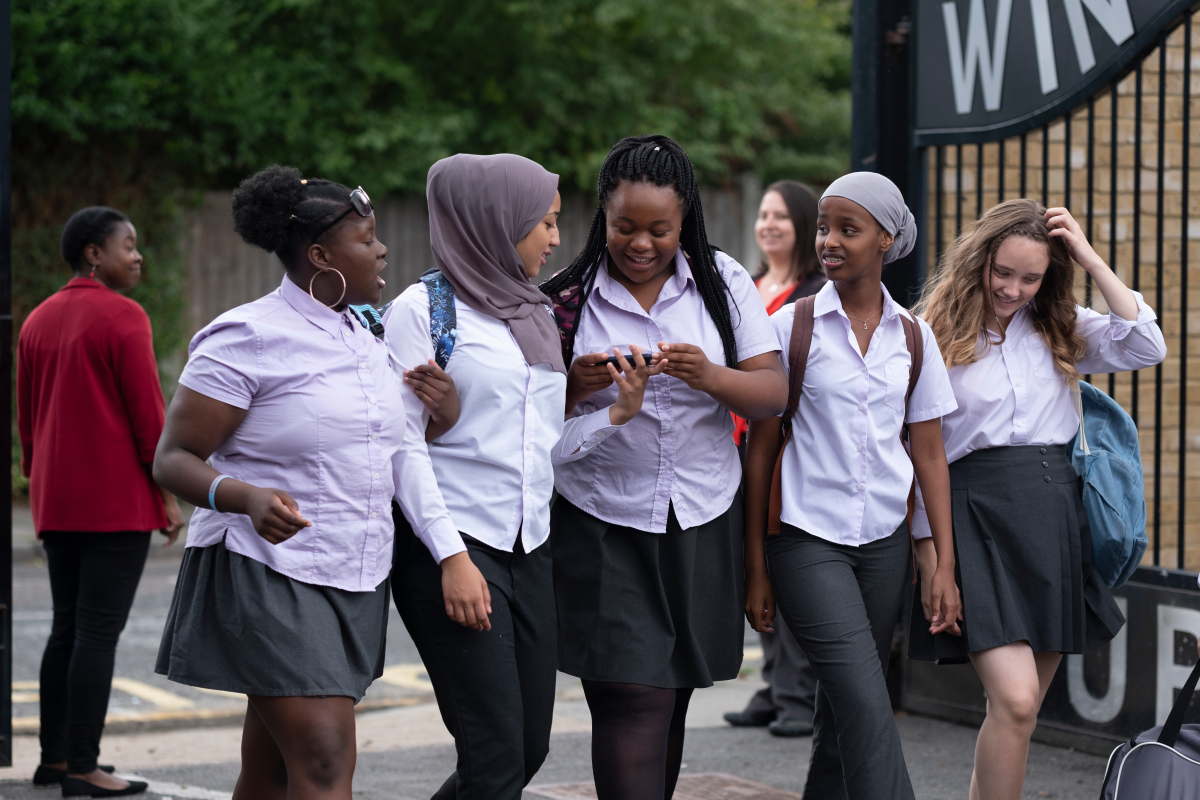 What do you hope this film says about East London to people who don’t know what it’s like?

Bukky: I think that people from outside of the UK see British people or people from London as aristocrats. They think of nobility or similar stereotypes. My norm is very different to that; that’s a stereotype that I’ve never come close to in my life. So I hope that people will get to see London how it actually is: as a multicultural, joyous place that’s full of so many charismatic, cool, different people.

Kosar: Yeah I think that London is very beautiful. It has its negativities – everywhere in the world does – but it’s a very cool city.

Why do you think that it’s taken so long for the stories of the girls in this film to be told on screen?

Bukky: I think that people are scared of what’s real. In art, you shouldn’t have to be imaginative; you should be inspired by what’s around you.

I also think that art is a reflection of the climate that we’re in, and we live in a racist, discriminative climate. People are scared of differences, and those people are the gatekeepers, so the narratives that are close to them continue to be told. Rocks is a pivotal film because it paves the way for new gatekeepers like Sarah Gavron and Claire Wilson and Anuradha Henriques (the assistant director) to create beautiful cinema.

Kosar: It’s always the same people who are telling these stories; it’s so repetitive. People are scared of something that’s new and honest.

You both helped to create your characters, how did you want them to come across on screen?

Kosar: My character exists because of who I am, so she was already me. What was most important to me was to show Sumaya as loving and caring, and to put others before herself in a very truthful way.

Bukky: This was when I really saw how talented Kosar is [Kosar swats away Bukky]. I was trying to look outside of myself for Rocks, when really I should have been looking within. It took me a few weeks to realise that, but Kosar got it right away.

Does it frustrate you that people perceive Rocks and the characters in the film this way?

Bukky: 100 per cent. It’s absurd. It’s upsetting when you live in a society where for your whole life, someone’s telling you who you are and what you’re going to become. We have so many brown girls and so many marginalised people who have been conditioned.

Imagine if people were able to step outside of this box. It would be so beautiful. People would be so much happier; their self-perceptions would be so different.

Kosar: Exactly what Bukky said. Frustrated is an understatement. Imagine a person being told that they are something before they’ve had the time to figure out their identities for themselves. If I start talking about this more I just won’t stop, so… 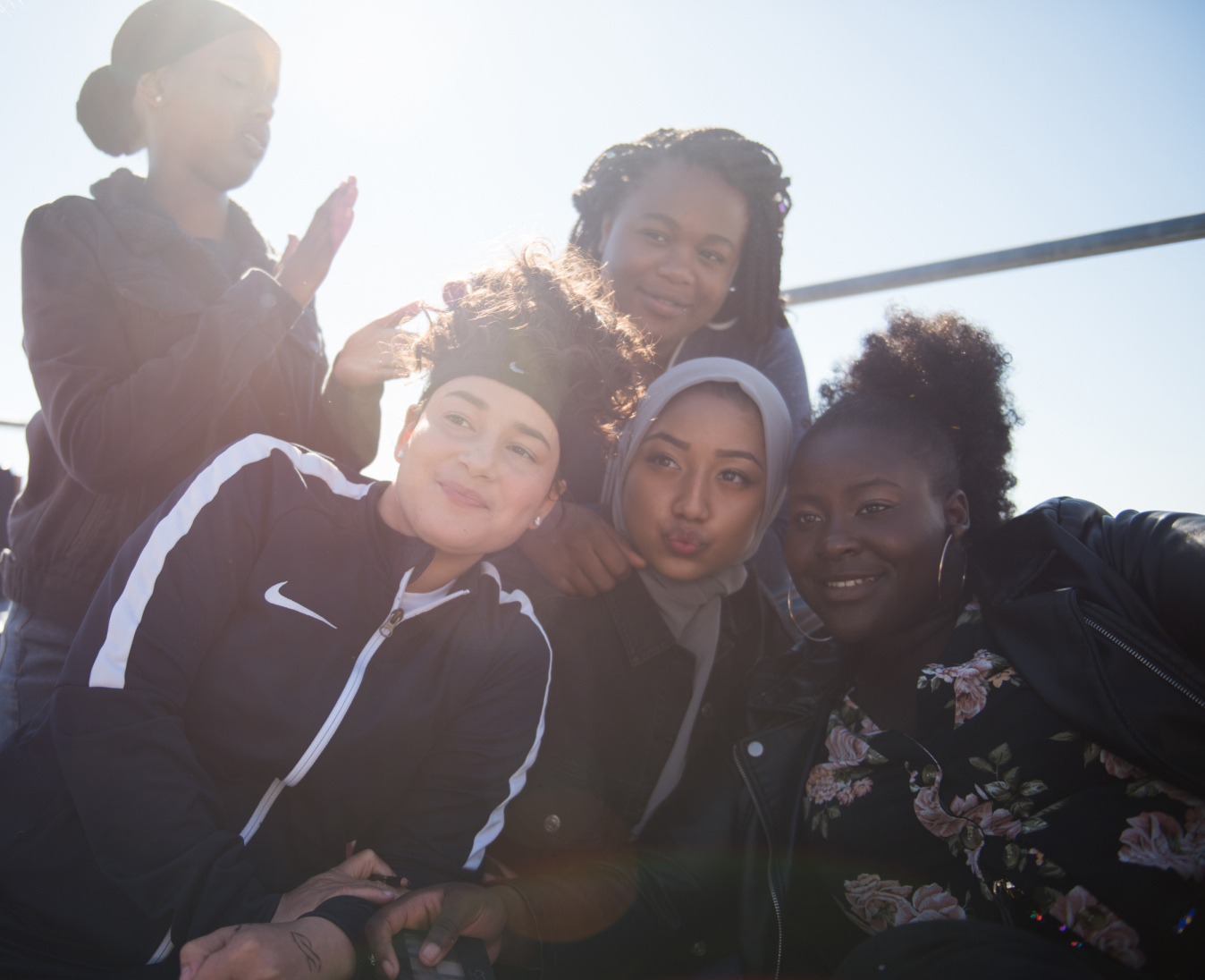 What do you think that it means to be a teenager in London today?

Kosar: Young people in London aren’t even young if I’m being honest. They have to grow up faster than a normal child. You have 16-year-olds who are entrepreneurs, who are starting fashion lines, who are doing makeup, who are thinking about income and being financially stable.

You shouldn’t be thinking about that. At 16, you should only be thinking about going to school and focusing on your GCSEs, not bringing income to the house. I think that the media plays a big part in influencing kids to do that, especially kids of colour from London.

But there are also positives like we see people from all different races from such a young age. Like from primary school I had an Indian friend, and a Nigerian friend. You learn things from different cultures and it widens your knowledge of the world.

Bukky: There’s a scene in Rocks that articulates that beautifully. It’s when Sumaya comes round to Rocks’ house in her mosque attire and Rocks is like, “Mashallah!” It’s about two friends who are so open to each other’s cultures.

There is such a clear bond between both of you. What do you bring out in each other?

Kosar: I had an instant connection with Bukky when I met her. It felt like I’d known her for 25 years. I can have conversations with her that I can’t have with other people; they’re such fruitful, educational conversations. She has such an interesting mind, and she’s changed me for the better.

Bukky: Kosar has changed my life. I’ve never seen energy like hers before, and I’m being completely honest here. We’ve got no time to lie. I’ve told her that she’s going to be in my life now whether she likes it or not.

Rocks is released in UK cinemas from 18th September.

Linkedin
RELATED ARTICLES
OTHER ARTICLES
In the latest OFFF Dispatch, the enigmatic designer dives into his process, connecting the dots between his unique and varied creative output.
Over the weekend, London locals came together to resist a pre-planned police raid targeting delivery drivers.
The situation in Afghanistan remains dire, with many groups facing persecution at the hands of the Taliban.
In the last of our dispatches from OFFF Barcelona, Rufus Deuchler and Vincent Gault discuss the future of creative process.
A group of Ukrainians living in Poland are helping Ukraine withstand Russia’s brutal invasion by buying supplies and shipping them directly to the war’s frontlines.
Our new magazine is here, starring the inimitable Mitski. Order your copy now and join us on a trip around the world.