The discovery of LSD in 1943 sparked fascination throughout the scientific world. Over 3,000 experimental and clinical studies explored its powerful psychedelic effects and the potential it offered for everything from psychotherapy to the CIA’s ‘mind control’ programme. But after LSD escaped the lab in the early ‘60s and began to foster a popular revolution in consciousness, the establishment panicked and the door to further study was slammed shut.

The Beckley Imperial Research Programme has finally broken over 50 years of prohibition and taboo to release the world’s first imaging study on LSD’s effects on the human brain. Ten years in the making, their pioneering study used multiple brain imaging techniques, such as MRI and DAT scans, to show for the very first time how LSD changes consciousness.

Their findings demonstrate the neural changes that underlie these effects and help us gain a greater understanding of the enduring mystery of human consciousness. They are also the first step towards working out how LSD can be used in treatment of depression, addiction, OCD and other mental health issues that conventional medicine and psychotherapy has proven largely incapable of tackling.

“For human neuroscience, this is the same as the discovery of the Higgs-Boson particle,” explains Dr David Nutt, who co-directed the study with Beckley founder Amanda Feilding. “We have known that we needed to study the effects of LSD on the brain for almost as long as we have known there was a Higgs-Boson, but no-one did it because the reputational risk was too high. We’ve discovered remarkable insights and shown it can be done. This should be transformational and hopefully now the floodgates open for further research in this field.

Amanda Feilding has campaigned for research into psychedelics for decades, after taking part in LSD research in the 1960s before it was banned. In the 1990s she met Swiss chemist Albert Hoffman who discovered LSD, and promised him she would restart research into the drug by his hundredth birthday in 2006, but missed this date by 10 years.

The Beckley Foundation’s LSD research follows earlier studies into psilocybin, which, among other discoveries, helped explain the changes in function of the Default Mode Network. “That’s basically the neuro-scientific term for the ego mechanism, that keeps us in control of ourselves, centres our experience by filtering perceptions and keeping everything normal,” Amanda explains. “Diminishing the function of this system makes us more primal, like during babyhood when it’s more chaotic and there’s a greater likelihood of creativity, forming new associations and abandoning previously held assumptions. It has common features with meditation but also with psychosis. That is the fearful aspect and frightens people that psychedelics can shake the stability of sanity.” 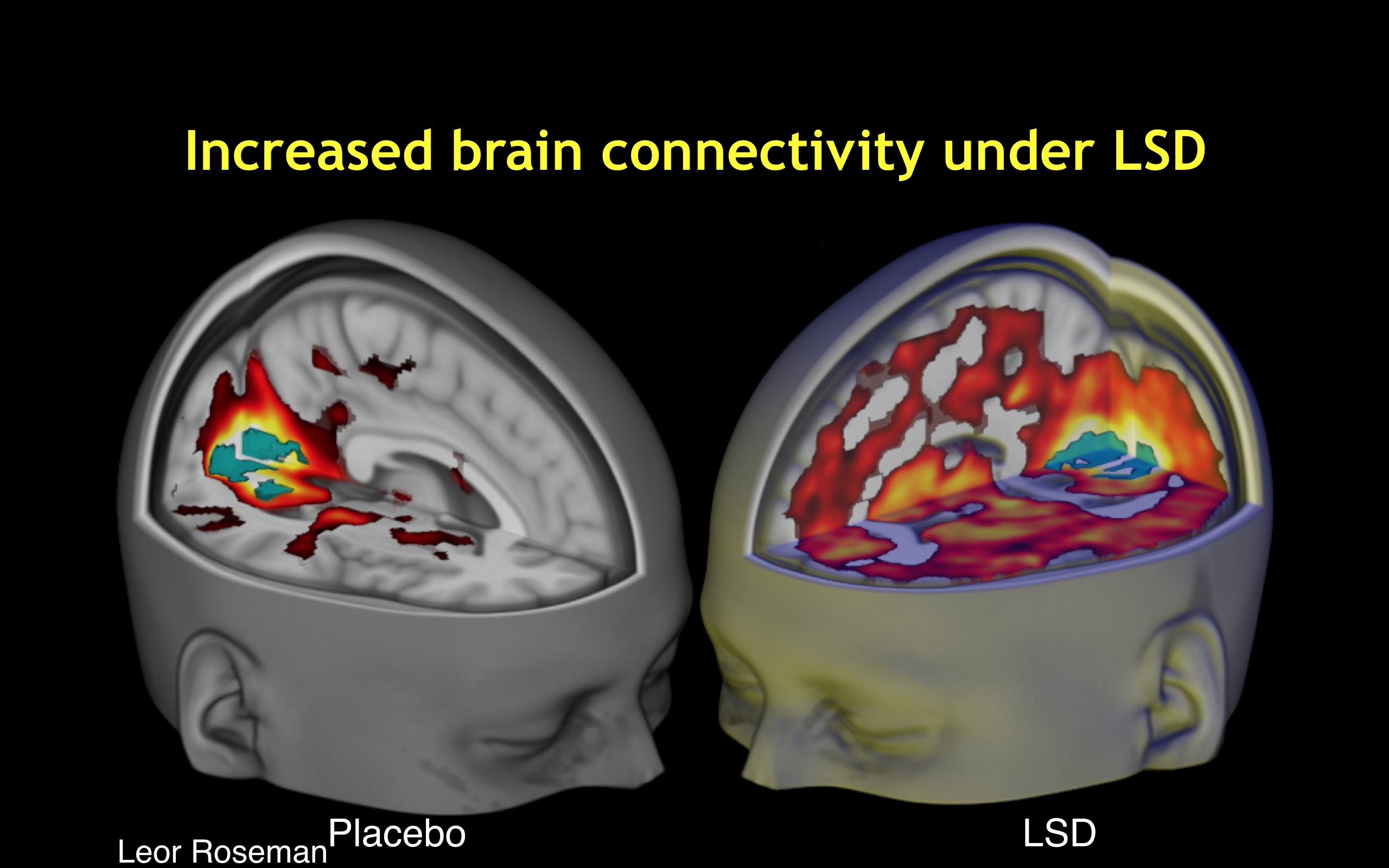 For the LSD study, 40 volunteers were scanned twice, once with a placebo and once with a dose of LSD. Their neurological activity was recorded while peaking and they were subsequently interviewed about their experiences. The findings illustrate how the destabilisation and disintegration of normally well-organised independent brain networks, such as the Default Mode Network, create a psychedelic state.

As the segregation between different brain networks is reduced, greater connectivity and communication occurs between them. Combined with a shift in brain wave activity towards more alpha frequencies, which have been associated with boosting creativity and reducing depression, this helps to understand the dream-like states experienced by users. Changes to brain activity and communication patterns involving high-level brain networks correlate with experiencing fundamental changes in consciousness, such as ego-dissolution, altered meaning and a more fluid state of consciousness. 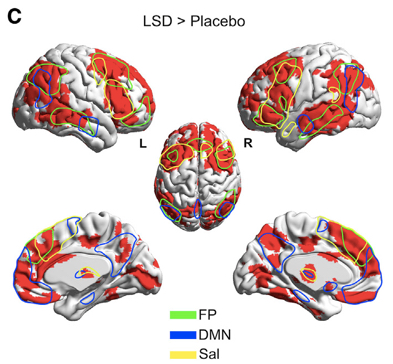 Lead investigator Robin Carhart-Harris explains that this is really just the beginning, but the team’s findings open the door to expand our very limited understanding of human consciousness, the effects drugs like LSD have on its function and its potential therapeutic benefits.

“The only other states you could relate it to are things like the spontaneous mystical or spiritual experience,” he says. “I’m really interested in the brain circuit we identified, the parahippocampal retrosplenial cortex/posterior-cingulate cortex circuit, which is disconnected during the LSD state. It’s kind of the imagination circuit, the sense of self circuit, the autobiographical self circuit – it’s all these high-level, really rich aspects of consciousness. We need more time and neuroscience needs more time to really appreciate the significance or our findings, but my suspicion is that there’s something really important about this particular circuit.”

Find out more about the Beckley Foundation’s LSD research.

Linkedin
RELATED ARTICLES
OTHER ARTICLES
Whether it's partygate, the climate crisis or the spiralling cost of living, the fightback begins on the picket lines writes Tommy Vickerstaff
In the wake of the decision by the supreme court to overturn Roe v Wade, thousands of protestors filled the streets to express their rage and anguish.
Proposals to introduce a minimum GCSE threshold for student loans will disproportionately affect those from marginalised backgrounds.
Thomas Hoepker‘s images taken during a road trip across America provide a searing social commentary about a divided country.
A new edition of a seminal book brings together iconic images of the band onstage in their full glory and backstage in moments of unguarded camaraderie.
Freddie Miller’s new series of photographs investigates who today’s trainspotters are and what drives their unfettered enthusiasm.