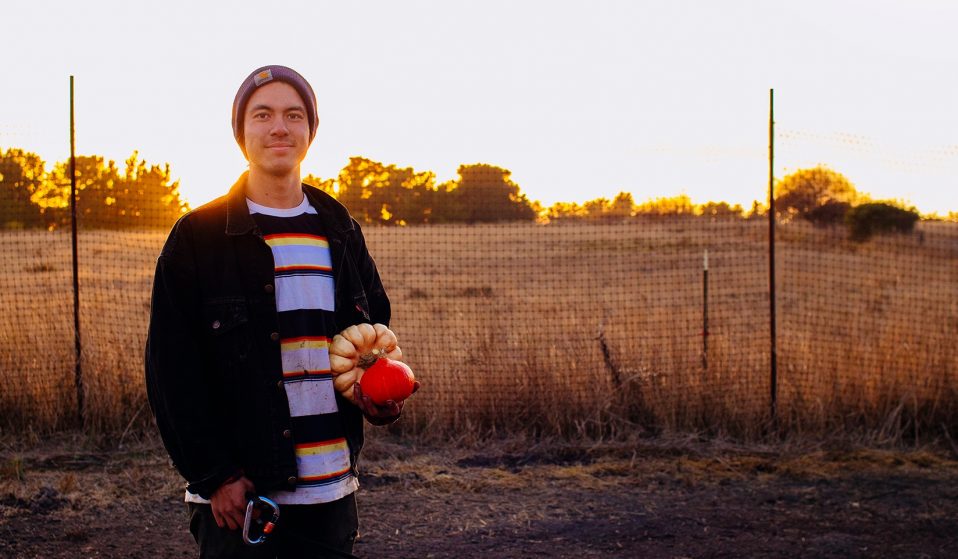 The 25-year-old talks history, heritage and why he wants to help build a movement of independent Asian American farmers.

In a profile taken from ‘Sandwich Magazine Issue 2: The Banh Mi’, the 25-year-old talks history, heritage and why he wants to help build a new movement of independent Asian American farmers.

Sandwich is a new food culture magazine exploring the often overlooked, but universally beloved culinary creation: the sandwich. Get your copy now.

The story of Scott Chang-Fleeman is one of diaspora and, like the hero of issue 2 the bánh mì, it is a story about being the product of your space and making that space your own.

Originally from Los Angeles, Scott is third-generation Chinese American and a farmer in Bolinas, a town northwest of San Francisco. He has just finished the first season on his farm Shao Shan; Scott grows vegetables and is focused on reconnecting with his Chinese heritage. Shao Shan is the Chinese name his grandmother had given him, meaning “youthful mountain”.

While interning on the farm and garden program at the University of California Santa Cruz, Scott grew choy sum. Encouraged by his college mentors, he sent samples to chef Brandon Jew of Michelin-starred Chinese restaurant Mister Jiu’s in San Francisco. Enamoured with the produce, Brandon helped Scott to start his own space: “He literally gave me seed money!” Scott laughs, explaining that, along with the funds secured from a crowdfunding campaign, he was able to lease a five-acre plot. He has been working on just over one acre of farmland for his first harvest and plans to develop slowly. 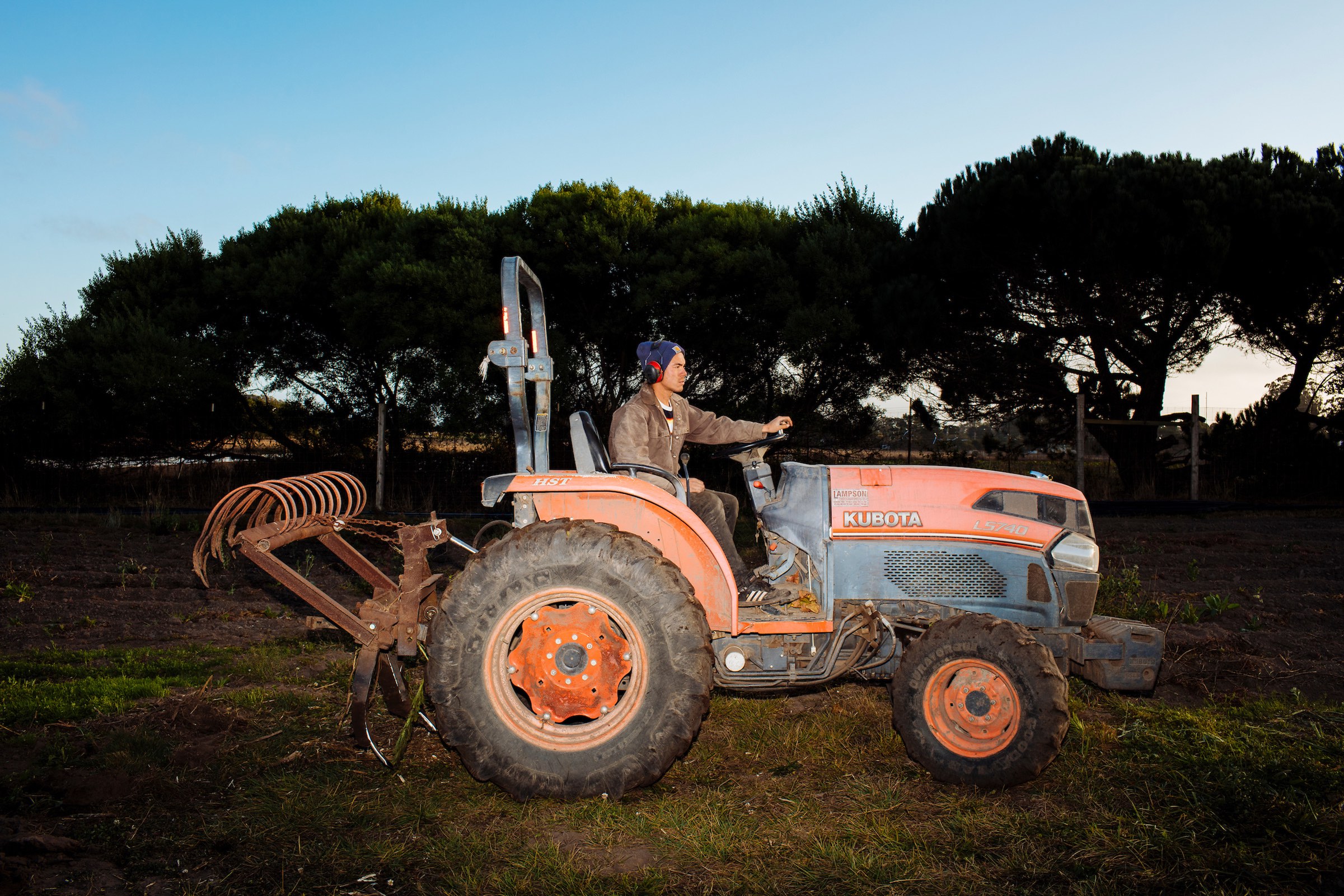 In such a short space of time Scott has become a supplier of Chinese vegetables, and he has also grown other vegetables of East and Southeast Asian origin by request, to a number of restaurants in the San Francisco area, including supermarkets, farmers markets and Little Window, a much sought-after bánh mì spot. “I could have sold a lot more; I was limited by labour and not market,” he explains. This first season he did all the toil himself, while also balancing working in a kitchen to help support cash flow, growing vegetables such as gai lan, choy sum, baby bok choy, Korean summer squash, winter melon, celtuce, cucumber, eggplant and herbs such as cilantro.

So why is this 25-year-old Chinese American man, who grew up in the City of Angels, becoming the go-to for fresh and organic Asian heritage produce? Without conflating a whole continent of migrants to the US into one identity, understanding the area of California and its history, and the complexity of Asian migrants to it, helps clarify why Shoa Shan farm makes sense now. And, why Scott is also the (current) answer for those cooking with Asian heritage vegetables.

To give context to Scott’s endeavour we do need to examine modern migration to the area. Chinese have been immigrating to California since the 18th century, as sailors and merchants, sometimes encouraged by American missionaries in China. Then came the California Gold Rush, when Chinese men came for gold but were also incorporated into massive labor camps to build the great the Pacific railways. This first wave of Chinese immigrants faced huge – often violent – discrimination, which eventually led to laws banning their migration from the late 19th century and into the 20th. 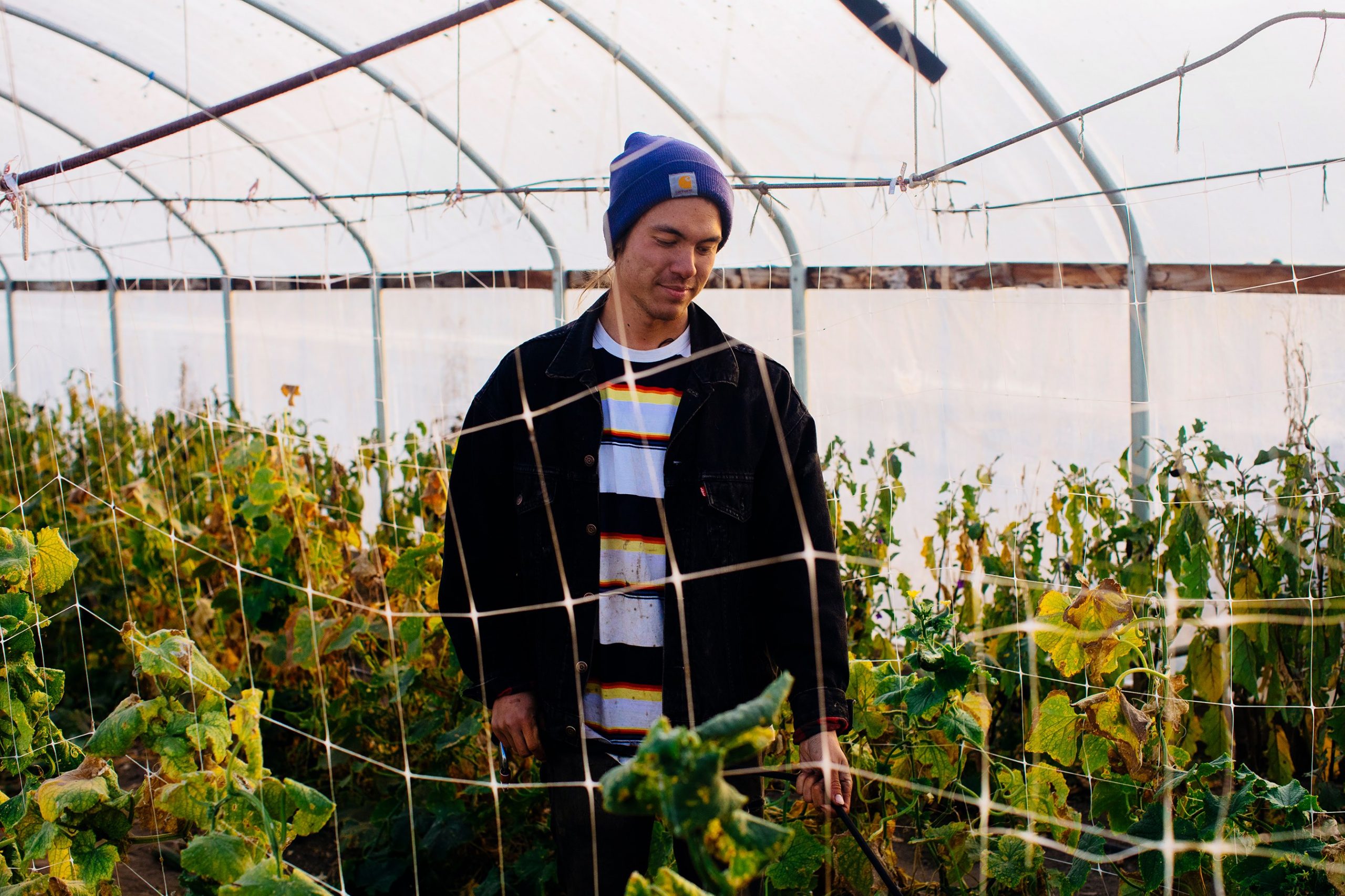 Along with the new transcontinental railroads came a demand for farmed produce out of lush and sunny California. In the book Working People of California, academic Sucheng Chan discusses the huge impact of Chinese immigrants on the area’s agriculture, bringing farming skills from home, and “[the] Chinese had also carved a niche for themselves as vegetable vendors manning stationary stalls”.

In the early 20th century Japanese migrants started paving ways within the agricultural field in California too. A little too successfully, according to the white population, as the California Alien Land Law in 1913 banned the Japanese from purchasing land in an attempt to stop the independent farms that the Japanese were founding. In this early twentieth century landscape of agricultural boom, many new migrants came from east, southeast and south Asia, and so communities grew centred around tilling the soil and growing food.

When the Vietnamese people came to California after the fall of Saigon in 1975, professor Beth Nguyen wrote for the Museum of Food & Drink, that these new immigrant communities established themselves across areas, and anchored themselves around, already established Asian food markets. “If there is one thing that refugees and immigrants will never give up,” she writes, “it’s their food culture”.

This swift charge through time anchors Scott’s work in a long history of Asian agriculture in the US, and helps to understand how the work of Asian migrant communities in California – in and around food – have bolstered future Asian American communities. “I had prioritised my American culture, and things had gotten lost along the way,” he says, “my family having been in California for so many generations a lot of cultural identity gets naturally lost through assimilation.” 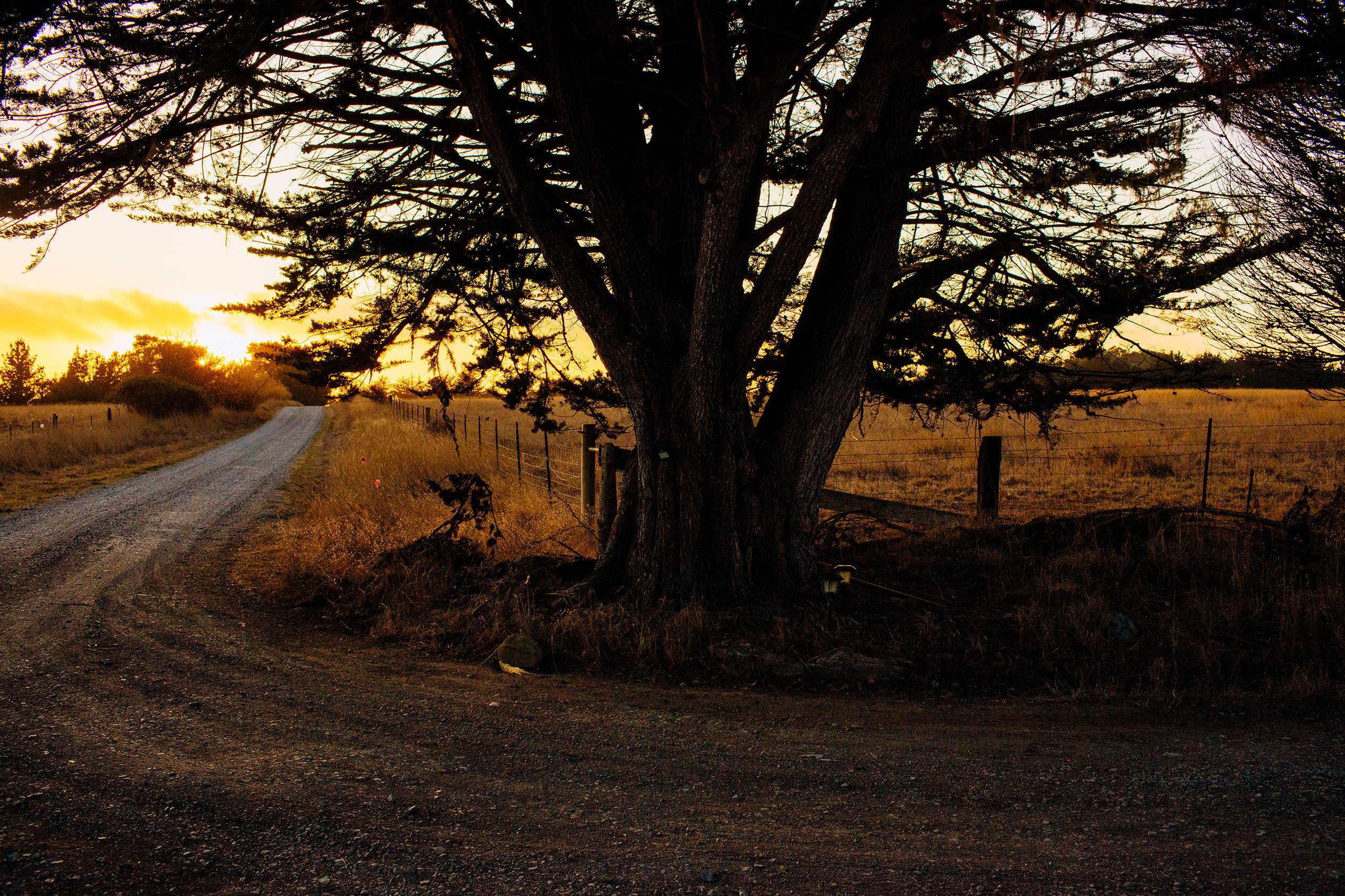 Although Scott’s work means that he has become a go-to for various Asian heritage vegetables, he is very clear about not wanting to be a catch-all. This is a project about his re-connection to heritage, but he sees this as a route for other Asian Americans to find ways into their own identity. “If I saw young white farmers growing choi sum, I wouldn’t think that was cool,” Scott explains, and so what he wants to do instead is to help change a narrative of what and who can be part of the farming community.

Therefore, it is also about re-examining how food in American is seen. “There has been a devaluation of Chinese food and produce. We expect it to be cheap,” says Fleeman. But, with more Asian food becoming mainstream – Scott cites TV shows such as David Chang’s Ugly Delicious, which is how he discovered Mister Jiu – and the shift in financial and cultural capital of second and third-generation migrants, these ideas of value can be addressed. “When I first ate gai lan that I had grown, I was shocked. It was like a different vegetable. It was so delicious.” Asian Americans are now shopping at farmer’s markets, they want quality, organic vegetables, Scott says. He wonders: “Why not have the vegetables of their [own] heritage in these spaces?”

Looking to the future Scott remarks, “I really enjoy being at the farmer’s markets, seeing who buys my produce and talking about how they use it. I can’t imagine a farm that is more than five employees or 20 acres. Instead I would rather be part of building a movement of more independent Asian American farmers.” 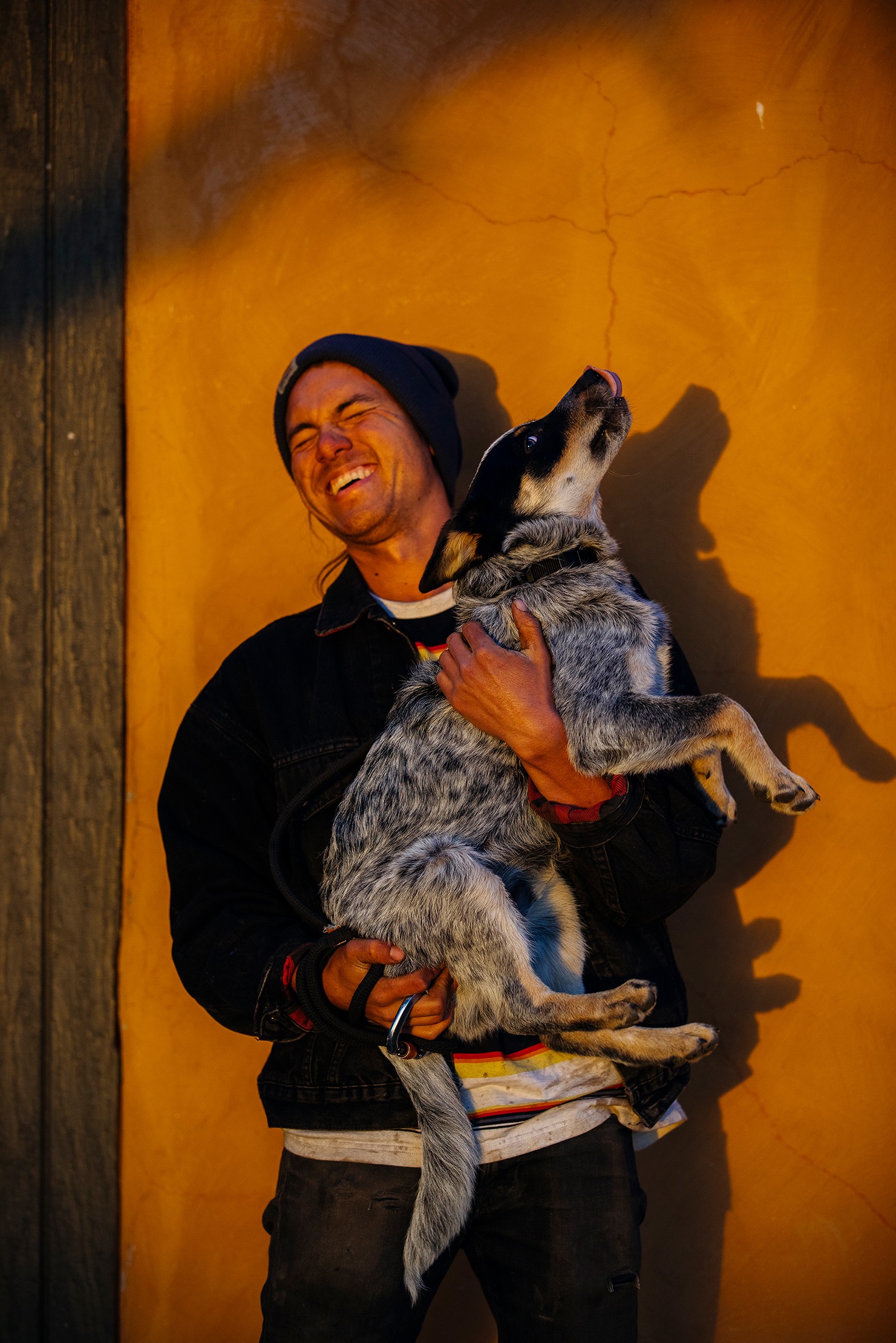 Mas Masumoto, owner of third-generation organic peach and grape family farm in California writes in Letters to a Young Farmer, addressed to his daughter Nikiko, “your grandfather left his fingerprints all over this land. [And] we believed in keeping old heirloom peach and nectarine varieties the world had forsaken. We too become forsaken, but with luck and sweat, we found home for the homeless […] I leave behind stories. A tale you’re now part of, a narrative you’ll write with your own words.” The etching of self into a landscape, of grounding and finding space to belong, is the work that migrants do.

As Scott builds his story into his farmland, his Instagram allows the rest of the world to see his story too. It is a story that tracks through generations, with a revelation about where his grandfather was from – a story that the family had not known. It is a story of the ‘every farmer’ – the highs the lows, the broken machinery and the much-needed support system. “It’s been a hard year,” he admits. “I have never eaten so badly!”. And you can see his gratitude at small surprises from other farmers, aunties and friends, and his dog Oli. It is a story of Scott’s own creation, built on heritage, history, and his perspective on the world. 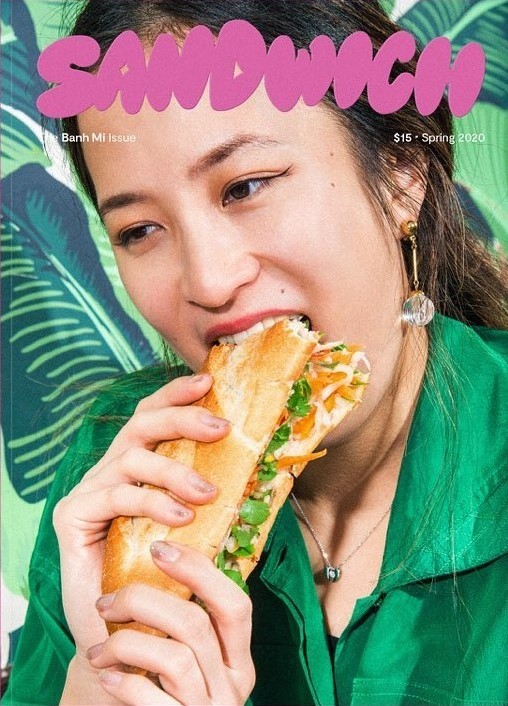 Sandwich Magazine is a collaboration between Huck publisher TCO London and condiments maker Sir Kensington’s. Issue 2: The Banh Mi is out now – buy here or follow Sandwich on Instagram.

Linkedin
RELATED ARTICLES
OTHER ARTICLES
The two-day long event returned to London this year, showcasing a spectacular parade, steel bands and Caribbean food.
Ahead of the release of their first collaborative album, the producer and rapper talk psychedelics and the state of UK hip hop.
Photographer David Corio’s archive offers a glimpse inside a revolutionary era of music and nightlife.
The idea that a younger generation is abandoning work has become a popular narrative online, but it doesn’t necessarily reflect reality.
Rogue landlords are exploiting young and inexperienced renters and leaving them in mental and financial turmoil, reports Niall Hignett.
A group of young Palestinians have found temporary freedom in the act of parkour, reimagining wreckage and ruins as a series of high-octane playgrounds.