Art & Culture / Sean Thor Conroe: ‘It was a hard book to share’ 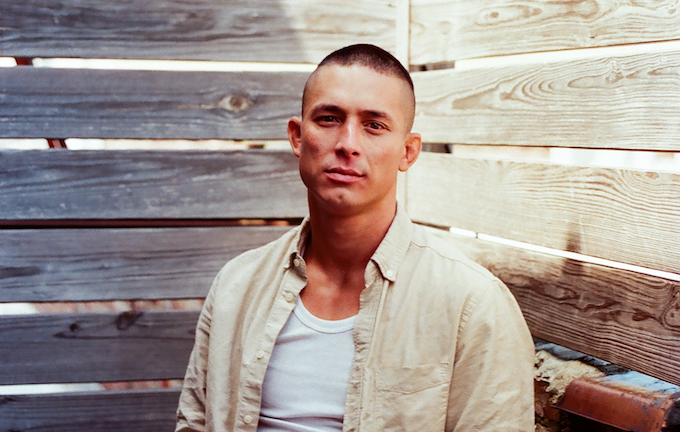 The novelist discusses his electrifying debut, which offers a deft examination of masculinity under late capitalism.

The 30-year-old novelist discusses his electrifying debut, which offers a deft and cuttingly-funny examination of masculinity under late capitalism.

Nuanced takes on contemporary masculinity are thin on the ground in literature. A novel that properly interrogates maleness while avoiding the usual fortune-cookie truisms is a seductive prospect – if executed successfully.

It’s welcome news, then, that Sean Thor Conroe’s debut novel Fuccboi – which approaches modern manhood with a deft, self-aware touch – landed earlier this week. Written in an engrossing, choppy cadence that sews together Philly slang and Twitterspeak, Fuccboi is an entirely singular, caustic book. Set between 2017 and 2019, it follows Sean, a Postmates delivery driver, as he bikes across Philadelphia chafing in his Under Armour, contemplating the state of men under late-stage capitalism, and negotiating a revolving door of identikit ‘baes’. It’s a novel that unspools as a stream of consciousness; a sometimes disorienting blend of Sean’s unique observations and insights into Conroe’s own life.

Conroe mocks Sean’s hypocrisy and egocentrism while never dismissing his perspective; he is a rare, bracingly complicated narrator. In addition to sharing a name, Sean (the character) is also a writer who wears his literary influences on his sleeve – the bibliography runs the gamut from Cervantes to Knausgård to Murakami. There’s an impish vein of humour that courses through Fuccboi, with Conroe evidently in full control of a tricky narrative that is heavy on style and light on plot.

Fuccboi’s road to publication is as unconventional as its subject. Conroe wrote Fuccboi under the guidance of Giancarlo DiTrapano, founder of countercultural publishing house, Tyrant Books. When DiTrapano passed away in March 2021, Fuccboi was adopted by Little Brown, furnishing the book with an unusual, marketable origin story. Then, in August 2021, the indie writer Sam Pink, one of Conroe’s friends and influences, penned ‘Fuck Boy’, a stinging blog post accusing Conroe of appropriating his form – though these accusations feel somewhat negligible for a novel so upfront about its inspirations, including Pink’s.

Five months later, with DiTrapano’s edits untouched and Pink’s post in the rear-view mirror, Fuccboi publishes with a quietly chic buzz. Huck caught up with Conroe to discuss his debut novel.

Could you talk me through the literary and cultural influences that recur throughout Fuccboi, and why those references were so important to you?

Yeah. I think as a reader when the protagonist is trying to process their life through books, that does something in the brain of the reader. It indicates to the reader that literature is not just something to do for enjoyment or escape necessarily, it signals that it can be tangibly applicable to your life. There are writers who do that – like Knausgård or even Jenny Offill or the Maggie Nelson book, The Argonauts – where there’s a direct correlation between the things they’re reading and writing down and how it helps them process their life.

Every reference and allusion in Fuccboi enriched it for me because that’s how the world is – we consume art in our day-to-day lives and art should be able to acknowledge itself. I’m curious about how you’ve felt promoting this book and talking about this character given his dislike for literary pretension and the ‘literati’.

Just to answer your question and complete that last thought; that outlook of trying to show how literature can be tangibly applicable to your life pushes back against the way we’re taught to look at literature as being in a vacuum of the classroom. So, I think in a way it’s pushing back against that [outlook] with a different kind of rigour. That ties into how he has his rants about literature because I think he has a way of experiencing it that he doesn’t feel like the vast majority of self-proclaimed ‘literary people’ are looking at it in that same way, and that’s limiting literature’s use or applicability to a wide range of people. It makes it insular, so there’s that element of pushing back against the, quote, unquote, ‘literati’.

But I also think that trope of a character who feels alienated and like he doesn’t have a place in society – whether that’s economically or in his chosen field of art or socially – there’s a long tradition of that type of story, so I think it’s partaking in that tradition. I think anytime the reader is unable to tamp down exactly where the protagonist stands on this or that thing and he’s straddling different lines, that’s when, for me as a reader, things get really exciting. 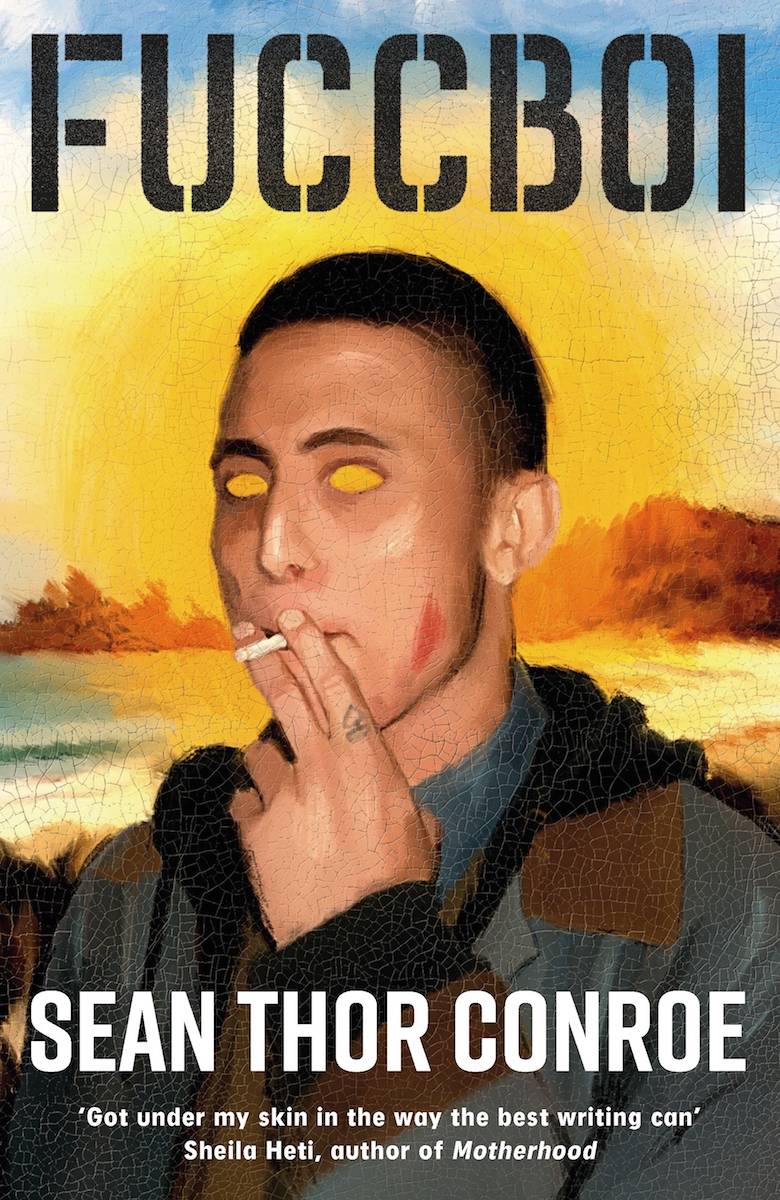 There’s a type of moral absolutism in art that is quite trendy right now. Fuccboi is so completely at odds with that, it’s so fascinatingly murky and complicated… were you mindful of that absolutism when you wrote the book?

Yeah. I would have an idea for a chapter, and I would work on a chapter for a month but try and hold off on writing it for as long as possible until I felt I could fully straddle the two sides of what the character was investigating, such that it evaded that type of moral absolutism. It was almost like looking back at something the character was feeling really adamant about and then the moment when it was really complicated, I could start trying to write it. There were some chapters that would go too far into, you know, a rant or they wouldn’t be complicated enough, and those would either have to become complicated or they would not be included.

I think what’s so strong about Fuccboi is that there’s such clear intentionality in the book, but it’s written almost like a stream of consciousness. Was it a hard book to write?

It was a hard book to share – or decide that I wanted to share, in some instances. My previous editor [Giancarlo DiTrapano] was really big on encouraging me that it was worth sharing. In a way I think I developed a system that was really rigorous where I would work on a chapter for a really long time, like every morning, reading a specific chapter to myself in my emails, and getting it to a place where it would feel like a really casual job – but, damn, I was Tetris-ing every bar, so nothing was missing.

I’m 30, I’ve been working on books every two years through my 20s, so where I was when I was writing [Fuccboi] was a pretty low point. In a way, it was kind of easier that way because I was, like, ‘OK, I’m just going in, I’m going in fully’. And as soon as I had an idea of what I was investigating, as soon as I had the title, that was a super-clear, orienting concept that just drove every chapter. I knew I was onto something when I was writing it.

I guess if it was hard to share, are you nervous at all about it being published?

Yeah, that’s the type of criticism and scrutiny you open yourself up to when you do that move. There’s a little bit of anxiety but, really, when you do that, you just have to change your relationship to the internet.

Are you going to take yourself offline or change how you use the internet?

No, no. I mean, a book is a super intimate thing, it’s the most intimate thing. A person reading it… you’re quiet, you’re by yourself – it’s not like music. So, I just have to know that whatever individual person experiences it, if they start reading it and feel inclined to finish it, then it’s doing something for them and that’s what matters. So, no, I don’t need to change anything too much, just know that people are gonna say what they’re gonna say and I can’t control that.

I wanted to ask about Sam Pink’s blog post last year and, I guess, what your reaction to something like that was?

You know, I cite all my influences in the book. We were tight but, basically, we just had a falling out, that’s really all that happened. There’s a scarcity mentality in art that’s just unfortunate. You could say it’s understandable; some people feel like there’s only a few people who can fill those spots. And maybe that’s something that’s unfortunate about how the writing world is but, ultimately, yeah, I’m just trying to generate excitement about books, and it’s just a falling out. I mean, you see it all the time in art and in rap.

You were once asked which one profession you think is a sham and you said being a writer – can you elaborate on that?

Yeah, I was probably being a little… cheeky. I think part of the problem of what [Fuccboi Sean is] railing against about literature is the insularity of it. So, if you have every writer whose careers are based on getting money from the academy and staying in these insular circles and getting more and more isolated as they progress and they look at their writing life as a career, they get more and more distanced from the world they’re trying to write about. It’s ironic that everything that happened with the book was completely random. And that’s what led to everything that blew up, too, it’s all those feelings about money and stuff, that’s really what it is.

Me and my former publisher, he got me the agent that I got, we had the contract ready, and it was amazing for me, this was who I wanted to publish it with, and then he passed away and all this energy happened. That created all kinds of feelings of confusion from my peers, so I guess it’s kinda funny that this is my career now. But you can’t really think of yourself as a writer, you have to be doing other stuff if you’re going to write anything that’s worth anything, you know.

The happenstance that led to Fuccboi being published is similar to the book where Fuccboi Sean is just living his life and things happen to him. How have you made sure that energy hasn’t overwhelmed you or the book?

Are you working on anything else? Was it a multiple book deal?

No, no, no, it was just this book, but, yeah, I’m gonna keep on going while I’ve got my faculties. So, yeah – onward.

Fuccboi is out now on Headline.

Linkedin
RELATED ARTICLES
OTHER ARTICLES
In the latest OFFF Dispatch, the enigmatic designer dives into his process, connecting the dots between his unique and varied creative output.
Our new magazine is here, starring the inimitable Mitski. Order your copy now and join us on a trip around the world.
Photographer Robin Graubard’s debut book offers an unflinching record of turbulence and change across the Balkans.
Following the release of his latest album God Don’t Make Mistakes, the rapper talks horror villains, police brutality and being unafraid to show his vulnerable side.
The author discusses her blistering new novel about history, revolution and queer love.
While protests over abortion rights rage in the US, access to abortion services is still almost nonexistent in parts of the UK.