Art & Culture / Self-appointed ‘King’ Macron is no antidote to Trump 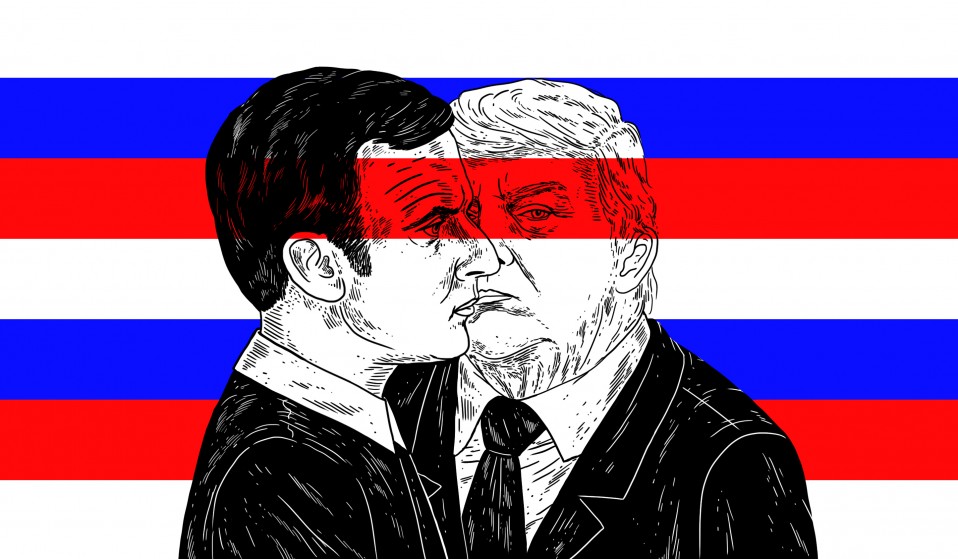 After parading through the Palace of Versailles with an entourage of underlings, French president Emmanuel Macron has allowed the mask to slip. What lies beneath looks scarily familiar.

After parading through the Palace of Versailles with an entourage of underlings, French president Emmanuel Macron has allowed the mask to slip. What lies beneath, says Sam Kriss, looks scarily familiar.

It’s inescapable: the President of France is behaving very strangely. ‘Democracy is not enough by itself,’ he pronounced in a new book. ‘In French politics, this absence is the presence of a King, a king whom, fundamentally, I don’t think the French people wanted dead.’

That king will, of course, be himself. Philosopher Bertrand Russell once deployed a quick example of the plasticity of truth: if I believe that I am the King of France, I’m a madman – but if everyone else shares in my delusion, I will become the King of France. Emmanuel Macron is putting that to the test, seizing the crown and planting it on his own head, and waiting to see who bows.

Macron has decided that his will be a “Jupiterian” presidency – he will be “remote but dignified,” Coriolanian, not stooping to talk to the common rabble or listen to their stupid bleats. Jupiter, bloating and baleful out in the stark lostness of space, embodied in a thirty-nine year old banker. Macron, who has read Husserl and knows all about phenomenology, will not give the traditional Bastille Day interview, because his “complex thought process” would only be sullied by other people asking him questions.

This week, Macron dragged the two houses of the French Parliament out to the Palace of Versailles – gathering them for only the fourth time since 1848 – to sit them down behind guards in toy-cavalryman helmets and bleat a pompous speech that he hopes to turn into an annual tradition. Ninety minutes of trumped-up TED talk, interspersed with the grim dead orthodoxies of a moribund economic order: crush the unions, hack away workers’ rights, more power to the bosses. The main takeaway, the line repeated in all the newspapers, was his call to silence ‘the cynic that lies in all of us.’ Because there could never be any actual substantive disagreement; it’s only cynicism that’s preventing Macron from doing whatever he wants with the country.

But a lot of people in the mainstream media are behaving very strangely as well. As Britain withers in the rigor mortis of Theresa May’s zombie grip on power, and America drowns in the oily gush of sleaze pouring in sheets from Donald Trump’s oleaginous bolus of a face, Emmanuel Macron looks like the answer: proof that the sensible centre can still win elections, that power can still be wielded by smart, erudite men who don’t pander to a reactionary mob.

This is why the Financial Times published a breathtakingly obsequious hermeneutics of his official portrait (‘Two iPhones on the desk: I am the tech generation;’ ‘Tight hand grip on the table: I am firmly in control’); this is why the New York Times lapped up his regressive labour laws; this is why the Guardian pushes the idea that Corbyn – who actually increased voter turnout, while Macron dragged it down to unprecedented lows – should be taking lessons from across the Channel; this is why CNN compared him to James Bond. Now, as Antonio Gramsci never actually said, is the time of monsters, but Macron can fight them back.

It’s still tacitly forbidden to criticise Macron, even as he measures himself for his ermine cloak: if you don’t like Macron, you must prefer the mass social unreason of Trump and Brexit. Would you rather the National Front had won? No, of course not, but there are 67 million other people in France equally qualified for the job of not being Marine Le Pen; the 60% of Macron’s voters who chose him to stop the fascists taking power would have done so for anyone. But in the end it’s a false choice: Macron or the reactionary right rampaging across the world; the sickness or its symptoms.

Macron’s weird stabs at royalty aren’t a betrayal of his sensible managerial centrism; they’re the same thing. His politics are an antipolitics – during the election, he announced that he was ‘neither left nor right,’ ni droite ni gauche, which also happens to have been a slogan of the interwar French fascist party. He repackaged the blinkered dictums of a failing economic order as something new and insurrectionary, but at the same time invisible: no more politics, no more ideology, just solutions.

His En Marche! and its partners took 350 of the National Assembly’s 577 seats, up from a previous high of zero – MPs who aren’t part of any serious political project, but a collective formed entirely around his personality. (Now, just like any other CEO of any other flailing start-up, he’s promising to lay off one third of his underlings.)

Politicians have to govern according to their plans and their manifestoes; kings simply rule, because that’s ‘the way things are’. Nothing is more sensibly centrist than the restoration of absolute monarchy; centrism is the unthinking valorisation of how things are, the politics of no politics, rejecting the two ‘extremes’ of making things better or making them too much worse. It’s just another variety of the nihilism we’re facing in Britain and America. The strange, self-regarding boy-king of France is on the side of the monsters.

Emmanuel Macron isn’t the antidote to Donald Trump. He’s a leader elected without any genuine political mandate, who came into politics from the equally sleazy world of business and finance promising to have government function just like any other capitalist enterprise, who makes strange and unpleasant outbursts, whose power is flattered by fanatical sycophants, who seems to believe that everything that happens should be on his say-so alone, who pursues policies designed to enrich a small elite at the cost of everyone else, whose politics aren’t propelled by any systematic or explicable ideology but just the relentless veneration of himself, who feuds with the media, whose reign is the triumph of the apolitical, who screams with the terror and emptiness of a liberal-democratic system that can no longer justify itself and no longer knows what it’s really for. Emmanuel Macron is Donald Trump.

Linkedin
RELATED ARTICLES
OTHER ARTICLES
The action took place in response to the 200 asylum-seeking children who were placed in hotels run by the Home Office who have gone missing.
Theo McInnes’s photos of the annual event provide an intriguing snapshot of contemporary Britain.
Tristan O’Neill’s shots of dancers caught in moments of reverie at the height of rave’s golden age are a testament to the UK’s legendary club culture.
After building his reputation covering the US civil rights movement in the 1960s, the photographer went on to produce some of the most enduring images of the past century.
A recent High Court ruling against the right to wild camp in Dartmoor National Park sparked the largest land protest in history – and campaigners say their fight is not over yet.
Photographer Becky Tyrell went down to the fading banger and stock raceway to meet a community desperate to keep it alive.