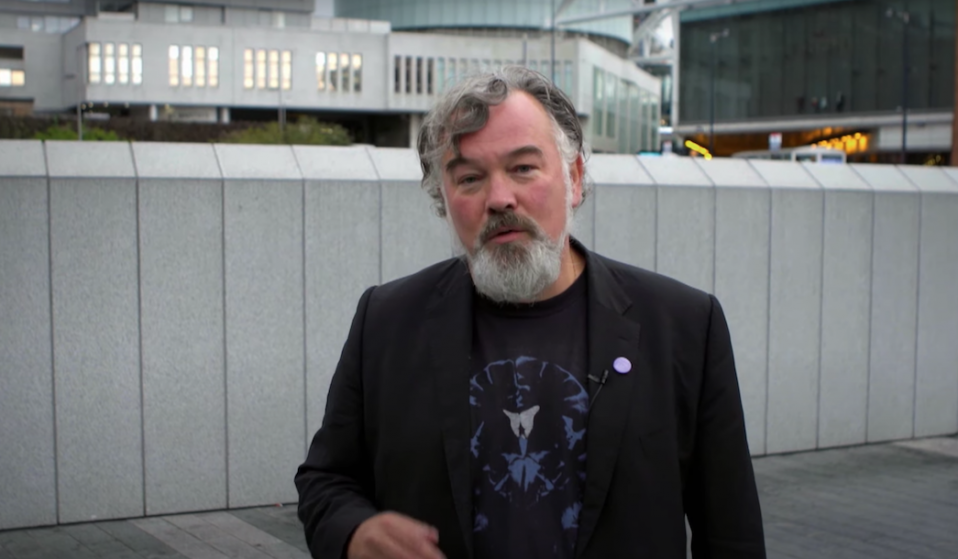 The comedian discusses his new documentary, which looks to recover the legacy of the relatively forgotten band, The Nightingales, through following its renegade frontman, punk icon Robert Lloyd.

The comedian discusses his new documentary about the relatively forgotten band, The Nightingales, and its renegade frontman, Robert Lloyd, which raises timely question around ideas of artistic success.

Despite their cult status in the ’80s, Birmingham-based band The Nightingales never achieved the same pre-eminence as their post-punk contemporaries, among them the Fall, Orange Juice, Joy Division, Gang of Four, and Wire. Their legacy is enduring but underappreciated, and their lead singer and sole constant member, Robert Lloyd, has somehow managed to remain under the radar for over four decades.

As for so many radical artists at the end of the 1970s, punk provided an open door for Lloyd to create more innovative and daring work. “Fuck that Sex Pistols shit,” Lloyd says in the film, “let’s really do the business.” For Lloyd, ‘the business’ meant badly recorded, discordant post-punk that combined Captain Beefheart style experimental rock with the surreal modernism of his highly idiosyncratic writing.

As British independent music moved towards electronica and acid house, Lloyd pushed his band in the direction of the slightly less-fashionable world of country and western. After splitting in 1986, The Nightingales reformed in 2004 and continue to tour around the UK and Europe.

“Jarvis Cocker was able to become the national misfit,” Lee tells Huck, speaking over Zoom from his home in Hackney, “and I think that is a calling that Rob missed somehow. He’s an anti-star, but in a different way than a scruffy punk rocker is. Nobody can really idolise him; he’d just be in a suit jacket and some normal trousers.”

Lloyd emerges in the film as a quietly admirable figure, a specifically British type of cultural entrepreneur and outsider artist, making great art while doing everything possible to avoid looking like a great artist.

“He wanted to do the film,” explains Lee, “but he hadn’t really thought what it might be like to talk about his life. He’s the life and soul of the pub bloke, not the sort to tell you deep truths about his life. So we spoke where he’d feel comfortable – Indian restaurants, in pubs, we’d just get stories on the hoof.”

By the early 1990s, Lloyd was without a band and without a record deal. The film addresses this period in Lloyd’s life where he worked for Royal Mail as a postman in East London, drifting in and out of alcoholism, housing problems and mental health issues.

“Rob talks about how he liked being a postman because it meant he could be in the pub by 11am” says Lee. “I hope alcohol was addressed on some level but it’s not like he’s a tragic figure. With Mark E. Smith [lead singer of the Fall], there were periods when a lot of the gigs were not what they should have been because of alcohol, with Rob that doesn’t happen very often.”

Much like Lee’s standup work, King Rocker messes with the form of the rock documentary. Anecdotes are contradicted, disagreed upon, and audiences are left unsure about key events in The Nightingales’ story. “It’s messy in the way that those post-punk indie records are themselves,” explains Lee, “Rob’s memory is messy. One of the reasons it’s different from other documentaries is because the subject [Lloyd] belatedly realised that he didn’t want to be in it, and it all has to be dragged out of him.”

What Lee really wants to do with King Rocker is challenge ideas of artistic success. “A lot of people who are successful talk as if they deserve it, which seems to me the same Tory mentality that makes out the poor are poor because they deserve it, and the rich are rich because they capitalised on chances offered to them.”

This is personal for Lee. After finding fame in the 1990s as part of a double act with Richard Herring, Lee grew disillusioned with what he today terms a “bloated industry leaning towards stadiums”. He extricated himself from a big management company in the early 2000s, and began to build a career emulating independent musicians like The Nightingales and the Fall.

“I thought well, if you can play to 5000 people a year without big management or promotion, if you could do 50 gigs of 100 people and sell a CD at it too, that’s totally doable forever. It wouldn’t mean you’d be famous, but it would mean you could do what you wanted forever.”

This is important for artists to consider as their economic situation worsens, and routes to the mainstream grow more narrow. Of course, for Lee, the opposite occurred. “Sometimes you have to step away from something, have a bit of a breakdown, and realise what it is you actually want to do.”

What Lee wanted to do was avoid the compromises that he saw in other comedians. “A lot of people make these Faustian pacts with the panel shows where they have to talk more quickly and create a condensed persona of themselves, which is at odds with being a good stand up. Some never find their way back. Some do like Frankie Boyle, but it’s been a long fight for him,” he says. 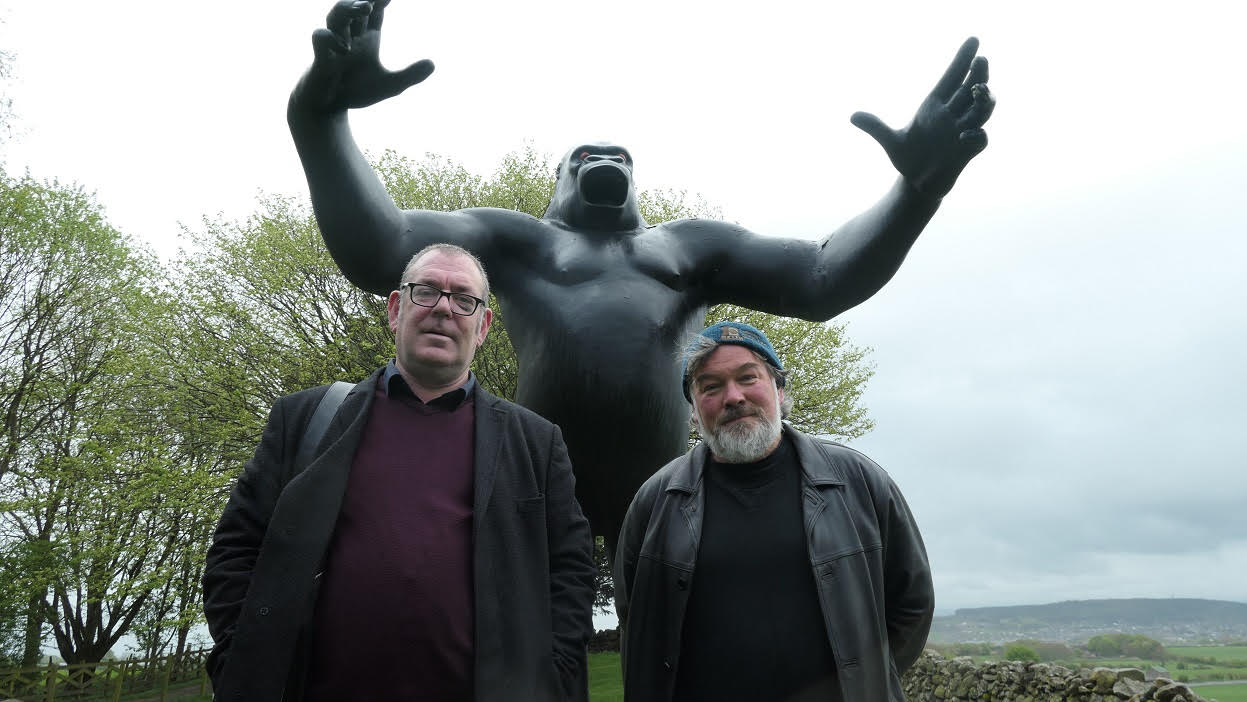 The breakthrough came in 2009, when Stewart Lee’s Comedy Vehicle was commissioned by BBC Two. Running for four seasons, the show contains some of the most innovative comedy broadcast on British screens, using artistic techniques from well outside of comedy – repetition, Brechtian alienation, unreliable narrators – to interrogate the hypocrisies and shortcomings of British public life.

Certainly, during the early 2010s, the show felt vital in the way that it drew a line between the bland conservatism of tax-dodging mainstream comedians and the cultural bankruptcy of the coalition government. “It would already be more difficult to do Comedy Vehicle now because everything involving politics is turned into this culture war by the right now. The BBC has nervousness about engaging with those sorts of ideas,” says Lee.

Was Lee wary of allowing Sky Arts to premiere King Rocker? “I was a bit, yeah, because historically they’ve been owned by Rupert Murdoch.” A pause. “I was offered a much better deal by Sky after the second series of Comedy Vehicle, but I turned it down because I thought staying with the BBC was the right thing to do. Now I feel that the news is biased on the BBC… The crumb from the Sky Arts table given to the arts is now more nourishing than the BBC Four crumb. What are you going to do? It’s a concession.”

Lee is concerned about the creative impact of Brexit on touring musicians, and points to his own mental health during the pandemic as a working performer. “I’ve worked five nights a week for thirty years, apart from a brief window. And suddenly you’re adrift in your mind. Promoting this has been a bit of a lifeline.”

A story Lee recounts during King Rocker epitomises the hidden benefits of this alternative path: “He [Lloyd] was looking at a picture of Duran Duran in a record shop and said, ‘Look at them, they’ve got lifetime achievement awards, and where am I? I’m in hell.’ But he’s not in hell. He’s got a lovely vegetable patch and a Wetherspoons just down the road. Covid willing, he can tour that band every year. He’s one of life’s winners really.”

Linkedin
RELATED ARTICLES
OTHER ARTICLES
Photographer Philipp Mueller reminisces on shooting Zurich’s thriving nightlife in an era fuelled by experimentation.
With abuse of call-centre staff on the rise, many are now speaking out about the hostility they’ve faced.
The photographer reflects on building trust with his subjects and using the street as his studio.
A new book traces the legislation’s tumultuous history and the lasting impact its had on LGBTQ+ activism today.
Photographer Yan Morvan revisits a radical moment in history, which saw the emergence of a fiercely-rebellious spirit among the UK‘s youth.
The internet furore surrounding a certain NY-based furniture designer should make us question whether condemning people in the harshest possible terms harms more than it helps.