Art & Culture / Strike! Magazine on how to avoid the Dark Side and start your own publication 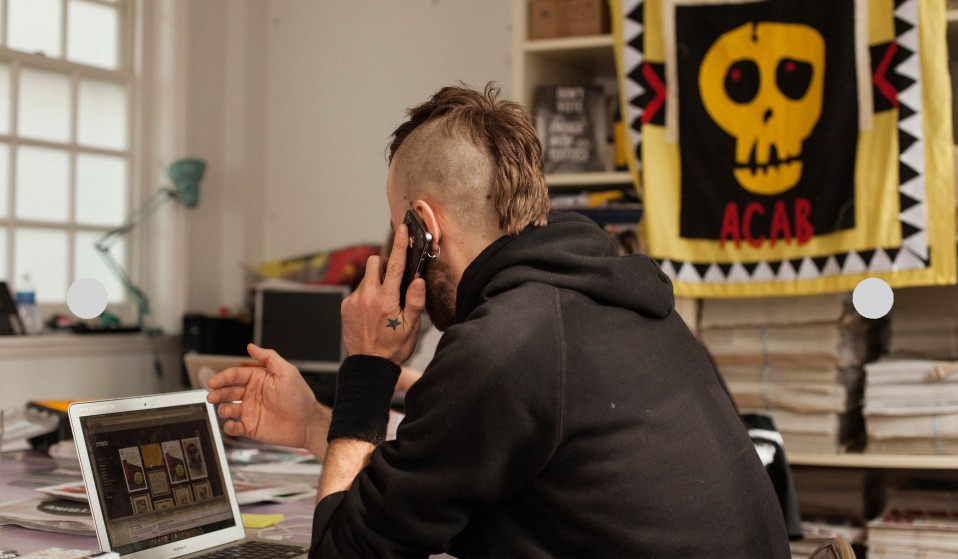 What do you do when you’re fucked-off with the way things are? You start a subversive magazine and start exploring other planets.

What do you do when you’re fucked-off with the way things are? You start a subversive magazine and start exploring other planets.

Because that’s what we did. We had very little experience in creating or designing print publications – we were just fucked-off with everything else. We started STRIKE! shortly after the Arab Spring and the 2011 riots in London: the whole world was erupting, but we felt badly let down by a mainstream media that was more interested in peddling the same old shite and celebrity stories in the interest of sales. It cost us less than 1,500 quid to get 5,000 full-colour copies of ‘The Fucked Issue’, our first newspaper; it only took another issue before STRIKE! became fully sustained through sales.

And it’s both the easiest and hardest thing in the world: the easy part is doing it – starting – the slightly harder part is keeping on doing it – and then keeping on, and keeping on. We were horrendously naive when we started: we put out the first issue as an experiment, but we sort of expected that everyone (yes, everyone!) would read it and instantly be up in arms, bashing down David Cameron’s door and demanding the dissolution of Parliament. But until you’ve got a bit of a reputation behind you, you’re just another crazy person standing on a street corner in the rain with an armful of soggy newsprint and a far-off look in your eye.

We now see our existence as resistance. You can’t simply wish the change you want to see in the world into existence, and it is very hard indeed to convince other people to be the change you want to see in the world. Gandhi was not wrong when he said all you can do is be it – because your best bet at achieving change is both starting with yourself and setting an example. If you’re sick of pitching to capitalist swine-dog media, start your own publication; if you think advertising is bullshit, don’t carry adverts; if you think online is inherently isolating and alienating, get out there and put your publication in people’s hands.

And we’d really recommend that people who are interested in spreading information do so in print: the revolution will not be web-optimised. That the Daily Mail has the world’s most read website should be enough to rid anyone of the idea that the Internet is a panacea. Yes, the mainstream print industry is in the death throes in the UK and around the world – but that’s not a problem with print, that’s a problem with content. That’s a consequence of being stuffed to the gills with advertising, bougie professional commentators, and drip-fed PR-shite.

We’re very proud to be ad-free at STRIKE!: advertising makes a twat of us all. We felt so strongly about this that when we became a workers’ co-operative, we wrote it into our articles of association that we would never carry advertising. STRIKE! is thriving because people want to pay to read it, not because some monolothic corporation gave us a bunch of money to sully our reputation selling their shit.

We’re run on anarchist principles and live/print by the slogan ‘DIY or Die’. We try to be as ‘deeds not words’ as possible, meaning that in addition to talking about action on our pages, we take it off them. Obviously the only action worth taking is that which those in power don’t want you to take; that’s the crux of disobedience – acting as if you are already free. The Special Patrol Group (SPG) is a shadowy, militant wing of STRIKE! magazine, and have claimed responsibility for taking our designs and deliberately putting them up in places they really ought not to. In 2014 they put up subverted Met Police posters proclaiming, ‘We’re still really racist,’ in a bus stop advertising space outside New Scotland Yard, and another that pronounced, ‘We started the 2011 riots by shooting dead an unarmed civilian and then lying about it,’ outside Tottenham Police station. On January 5, 2015, they were out again, this time on the London Underground, putting up quotes from an article by David Graeber – ‘On the Phenomenon of Bullshit Jobs’ – that we’d published. On the first day back to work after the holidays, workers were greeted with subverted Underground advertising spaces that questioned the nature of work: ‘It’s as if someone were out there making up pointless jobs just for the sake of keeping us all working.’

Last but not least: don’t be afraid to be desired. Too many political publications rely on being right, having the correct arguments, and forget to be beautiful; if you’re trying to create a more beautiful world, this is particularly remiss. It is very easy indeed to hate the Daily Mail; it is slightly more complicated to use that hatred to create the alternative. Right now we’re all living on the Death Star, so some people are understandably nervous about blowing it all up. But if we create new planets, new alternatives, then we can tell the Dark Side to fuck off, once and for all.

Linkedin
RELATED ARTICLES
OTHER ARTICLES
Financial turmoil is pushing people who work in the sex industry into more dangerous and desperate situations as a means of survival.
Birdy Chu reflects on documenting the historic moment in which the territory was formally passed back from the UK to China.
Rhiannon Adam spent three months capturing an ageing society wracked by division, isolation, and the aftermath of scandal.
As the Scottish government announces a rent freeze, an activist with Living Rent who fought and won shares how they did it, and what must come next.
Photographer David Corio’s archive offers a glimpse inside a revolutionary era of music and nightlife.
Following the announcement of an 80% hike in the energy price cap from 1st October, crowds gathered outside the offices of energy regulator Ofgem to protest and declare their intention to undertake a payment strike.