News & Politics / Activism / Buying new is not sustainable, no matter how you sew it 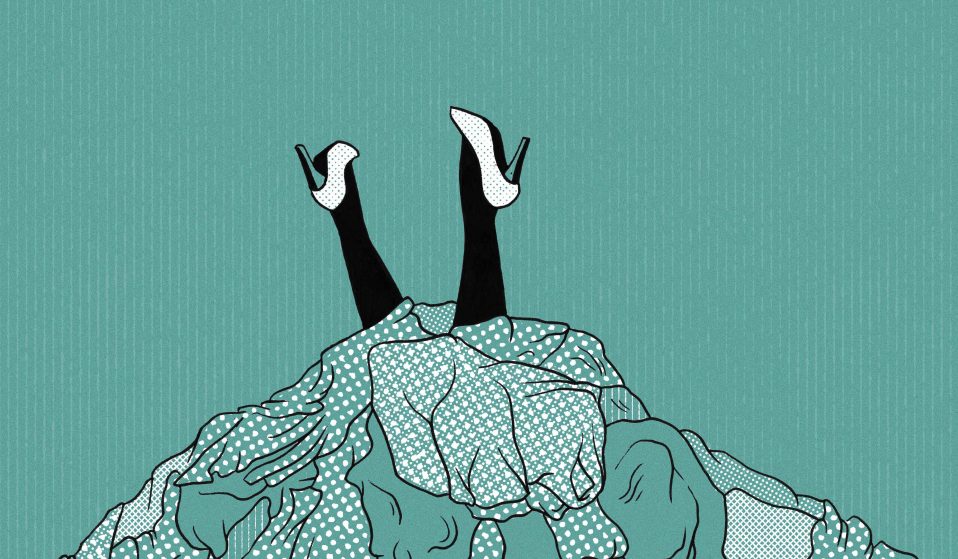 The fashion world may be promoting a new, more ‘sustainable’ kind of consumerism – but no matter what they try and sell, buying new will never lead to real change.

The fashion world may be promoting a new, more ‘sustainable’ kind of consumerism – but no matter what they try and sell us, buying new will never lead to real change.

The word “sustainability” is everywhere right now. The anti-fast fashion movement finally appears to be filtering into the mainstream, and the average shopper is waking up to the perils of their sartorial habits. Even influencers and big brands are cashing in on a new model of ethical branding.

But regardless of how consumption is greenwashed, the ongoing promotion of wants over needs creates an aspirational culture, in which acquisition of the right products is the pinnacle of self-empowerment. No matter how you brand it, buying anything new – especially within the constant churn of the trend cycle – can never be sustainable.

According to a microstudy by Common Objective, over the past six years, Google searches for ‘sustainable fashion’ have grown by 46 per cent, while searches for ‘ethical fashion’ have grown by 25 per cent. This mounting consumer interest in sustainability and ethics has led to increasing pressure on High Street brands to ‘go green’. Recently, ASOS announced it will no longer produce or sell clothing made from animal parts, including fur, cashmere and silk, while Adidas pledged to use only recycled plastics in the production of all its sportswear by 2024. Meanwhile, smaller local labels are using eco-friendly fabric-making and sourcing techniques to ensure their supply chains have as little human and environmental impact as possible.

On social media, a new tribe of sustainable style bloggers is emerging. These influencers, like the Kardashians and Jenners at the other end of the spectrum, shill products and lifestyles that are green, eco-friendly and ethical. Sam Leigh, for example, is the founder of online store eco.mono, which has an Instagram account that “curates brands based on their ethical and sustainable values.” She considers eco.mono’s role one of aggregation, and hopes that it will “lower the barriers” to ethical consumption.

“I don’t think we are going to save the world by producing more and more organic white tees,” she says. “However, people are always going to buy clothes, we are all human and consumers, therefore I think offering an alternative to fast fashion allows people to make a choice.”

Much of world is drowning in throwaway fashion.

A penny-per-item levy to fund textile recycling is step in right direction.

But to end destructive era of fast fashion & build a sustainable economy, Govt must look at caps on resource use & measures to prevent damaging practices. https://t.co/npjytx6dck

While the popularisation of responsible spending may sound great, it’s still encouraging spending. This continued production of luxuries, no matter how ethically they’re made, still puts a strain on the environment. In turn, the popularisation of eco-consumption – which relies on the presumption of authenticity – adds legitimacy to big brands pursuing seemingly ethical ideals, even when they are not. There’s a huge difference between Leigh’s support of small businesses using deadstock fabric to make small-runs of pieces in local workshops, and Zara mass-producing ‘sustainable’ ranges in developing countries where workers are paid below a living wage, for instance.

But the greening of fashion by brands and influencers is working: according to Nielsen’s 2015 Global Corporate Sustainability report, 73 per cent of millennials would pay more for sustainable products. Sustainable branding, therefore, is just important to the emergent ethical fashion industry as actual sustainability. So while brands like H&M and Zara are making efforts to promote their ‘sustainable’ offshoots – the Conscious Collection and Join Life, respectively – they’re still churning out astonishingly large amounts of clothing and textiles, a disproportionate amount of which are still winding up in a landfill.

When asked for comment on its sustainable range, H&M did not reply. Zara responded with a link to its Join Life page, which is filled with vague platitudes like ‘our supply chain repects workers and the environment’. Clicking through to parent company Inditex’s 2017 Annual Report yields similar information: nice sounding initiatives in sustainability and human rights strategy, but no indication of the real impact of the ethical model. For instance, the report notes that some 12,000 unwanted garments were collected in Zara stores through the Closing the Loop program, but fails to note what was done with those textiles.

Happily, Inditex reports that 88 per cent of waste generated overall by brand offices, factories and logistic centres (not including waste generated by retailers) was handled in a way that is not harmful to the environment. However, the report also reveals that some 73.6 million Join Life garments were created in that year, up from 44 million in 2016 – which seems fundamentally incompatible with the idea of sustainability. While Inditex can manage what happens with its production waste, there’s no accounting for where clothes ultimately end up if they don’t sell, or eventually wear out their (often short lived) welcome in consumer wardrobes.

It’s estimated that over 800 billion new garments are produced globally each year. In the UK, three-quarters of consumers send clothes to landfill rather than recycle or donate, with a 10 per cent increase in consumer clothing purchased since 2012. In Australia (the second biggest per capita consumer of new clothing in the world, after the US), it’s estimated that some six tonnes of textiles are sent to landfill every 10 minutes.

On a global scale, the United Nations Economic Commission for Europe (UNECE) believes that the average consumer purchases 60 per cent more clothing than they did 20 years ago, and that on average, each item is kept half as long, with about 40 per cent of garments in wardrobes in developed countries going completely unworn.

Meanwhile, the fashion industry’s environmental footprint is said to account for 10 per cent of the world’s CO2 emissions, 20 per cent of global industrial wastewater, 24 per cent of insecticides and 11 per cent of pesticides. It’s estimated that by 2030, the apparel industry will emit some 4.9 gigatonnes of carbon dioxide, matching the current output of the US’ total greenhouse gas emissions, offering a significant contribution to global warming. When I speak to Maria Teresa Pisani of the Economic Cooperation and Trade Division at the UNECE, she gives a bleak prediction for the future of the environment in a fast fashion world: “By 2050, the release of plastic microfibres in oceans could grow to 0.7 million tonnes – the same as four billion polyester tops – and the input of fossil feedstocks would reach 160 million tonnes. Resources and water usage will become problematic and the managing of waste increasingly challenging: by 2050 more than 150 million tonnes of clothing would be landfilled or burned.”

Your new @spicegirls feminist slogan t-shirt was most likely made by a woman earning less than a living wage under abusive conditions #iwannabeaspicegirl @comicrelief Read more: https://t.co/xZ1Smgjisw pic.twitter.com/3ePQHYCAoU

But this future might already be upon us, as luxury brands are already burning excess stock in a bid to preserve the market value of their products through engineered exclusivity. For instance, in 2018, the world was shocked to learn that Burberry destroyed over £28m of excess stock. While destroying unsellable products is, apparently, common practice in the fashion industry, Burberry pledged to abandon the processes and recycle and repurpose old stock instead, following to widespread public criticism. The production of unsustainable levels of new stock is a worrying byproduct of our heightened consumer culture – and certainly something for shoppers to scrutinise when buying new, regardless of whether the tag says the product is green, ethical or any other indicator of corporate responsibility.

So while it might seem as though ‘sustainable’ style is an ethical alternative to fast-fashion, the mutually dependent relationship between consuming and production means that, as shoppers continue the quest to obtain, brands have a tacit mandate to continually mass produce clothing. Whether those clothes are made under humane conditions from organic fibres is irrelevant: they’re still things that didn’t exist before, that took resources to create, and that ultimately potentially contribute to climate change and the textile waste problem destroying the environment. The ‘sustainable’ sub-labels of big brands are still, as environmental journalist Lucy Siegel said, “predicated on producing ever-increasing volumes at lower prices and faster speeds.”

At the Copenhagen Fashion Summit earlier this year, Paul Dillinger of Levi Strauss Co. described how sustainability initiatives are a weak form of repentance by big brands. “The circularity thing makes it so we can double our business without worrying about things like straining water systems around the world,” he said. “In fact, no. If six out of 10 garments we produce end up in a landfill or incinerated within the first year of production, should we have made those six?”

A better way to describe ‘sustainable style’, therefore, is ‘conscious consumerism’. You’re still buying, but you’re doing it better. It’s essential to ask how something can be sustainable if it takes new resources to be produced, when we already have a glut of perfectly re-usable, already existing products at our disposal. Acknowledging that any shopping habit isn’t sustainable – no matter what the anti-fast fashion movement is telling us – is the only way to start the journey to real change-making.

For instance, making better choices, like buying products that are locally made, from deadstock or recycled fabrics, and that are timeless and created to last, is a good start. Of course, the only want to be truly sustainable is to buy only secondhand – and ensure clothes are re-donated or recycled once they’ve been worn to death.

Contemporary consumers must interrogate the sustainable fashion movement, including the power of influencers and brands to drive consumption under the guise of righteousness. Slapping green tags on mass produced products – or anything new – is just another marketing ploy, and one that appeals to vanity – the image of the flawless, guiltless shopper we aspire to be – as much as any other fashion ad campaign. Pisani points to a 2017 Greenpeace report, which found that across Europe and Asia, consumers are increasingly buying more than they need or even use. “Consumers are no longer shopping because they need something, but because they look for fulfilment, encouraged by social media and the ease of online shopping,” she says.

As consumers, we must reevaluate what ‘sustainability’ really means if we’re to build a sustainable future. Sustainability can’t be worn to indicate status, like a designer handbag. It’s not a badge of fashion honour. Instead, it’s an inward choice consumers should make in order to build a better world for the future. While it’s important that we seek out transparent supply chains and environmentally-friendly products, it’s equally important to ensure that we don’t mistake responsibility for sustainability.

Linkedin
RELATED ARTICLES
OTHER ARTICLES
Financial turmoil is pushing people who work in the sex industry into more dangerous and desperate situations as a means of survival.
The idea that a younger generation is abandoning work has become a popular narrative online, but it doesn’t necessarily reflect reality.
Ahead of the release of their first collaborative album, the producer and rapper talk psychedelics and the state of UK hip hop.
Rhiannon Adam spent three months capturing an ageing society wracked by division, isolation, and the aftermath of scandal.
Thousands attended the annual event this year to wheelie through the city and call for ‘knives down, bikes up’.
For over a decade, gamblers have won big by employing people to place live bets from the court. But does this dubious method still work?