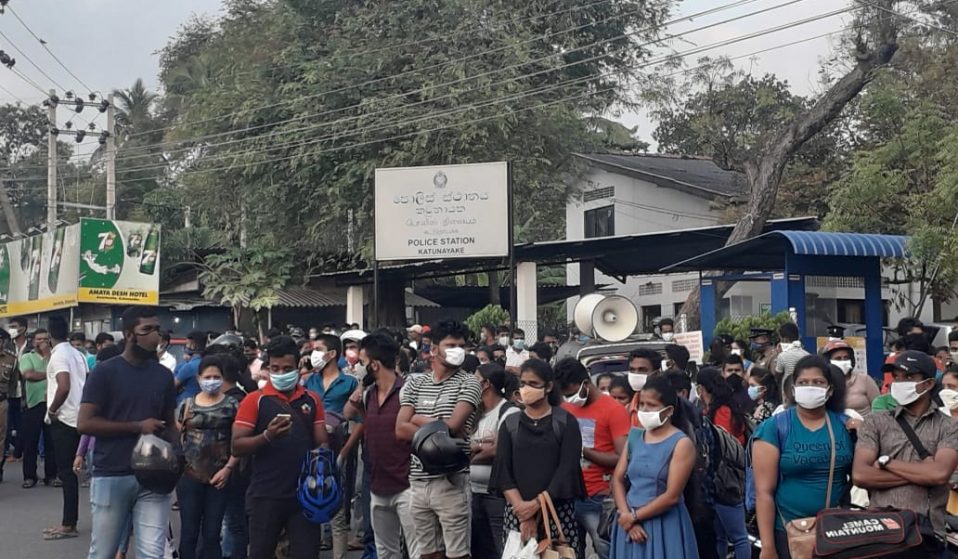 As shipments get cancelled and factories shut down, the global pandemic has caused chaos and suffering for millions of garment workers across the Global South.

As shipments get cancelled and factories shut down, the global pandemic has caused chaos and suffering for millions of garment workers across the Global South.

As well as factories, Katunayake contains vast dormitories housing thousands of garment workers, the majority of whom are women migrant workers from rural communities. The cramped dormitories are described as holding between 10-100 people, so the garment workers live in groups sharing the same toilets and washing facilities. Many of the women have their children with them and it is reported that several hundred construction workers from the nearby airport are also housed in the crowded boarding houses.

When the area was declared high-risk from Covid-19, around the week of March 16, the industrial park went into lockdown. Local NGOs report that 10,000 garment workers were stranded in Katunayake for two weeks.

The Sri Lankan Government has been strict about enforcing its nationwide curfew. This left Trade Unions and NGOs unable to fully monitor the situation in the Free Trade Zone, and left workers crammed together without access to health care or adequate food as supplies ran low. 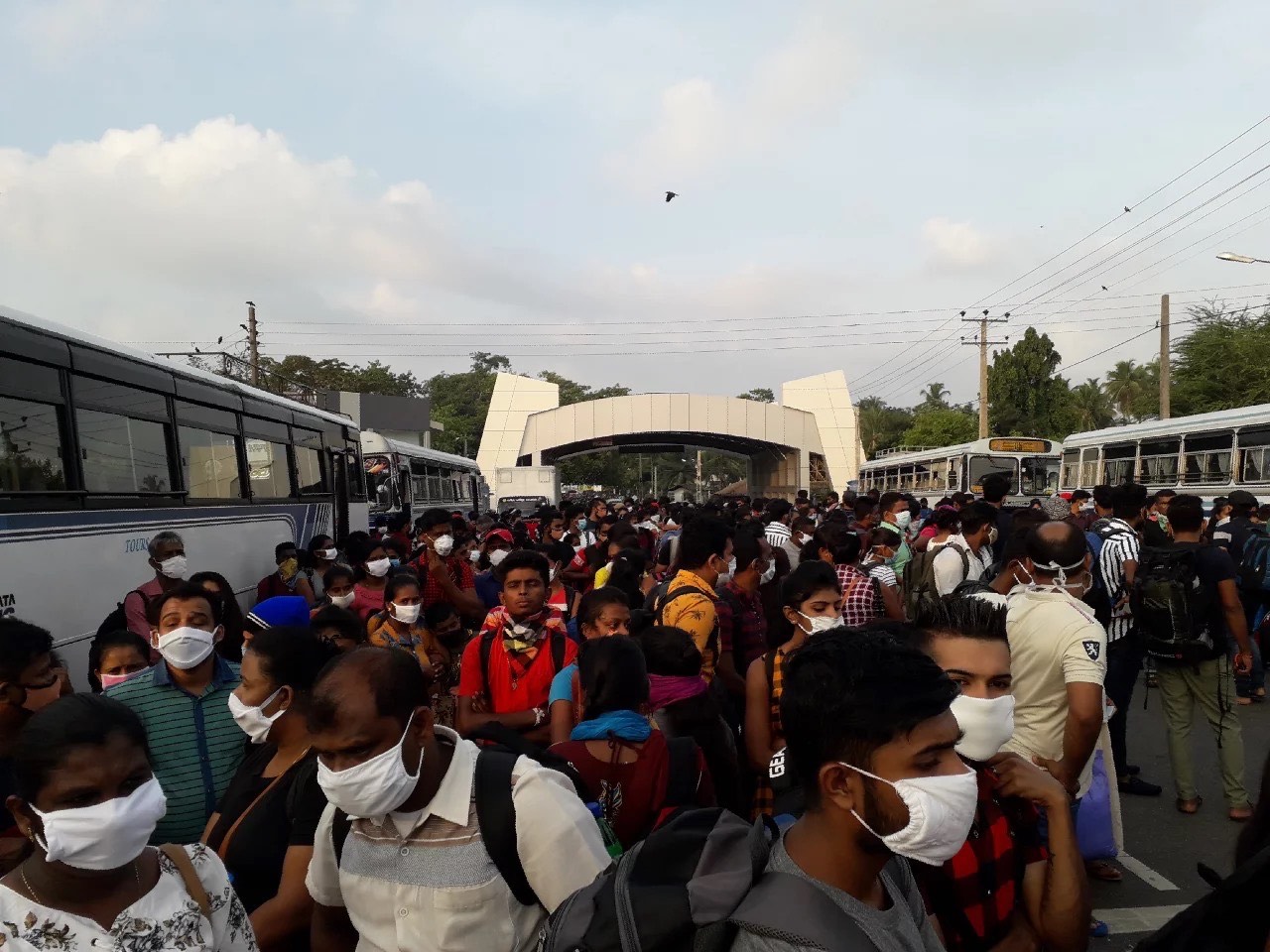 “I have talked to some workers and they were saying ‘more than the virus we might die of hunger’ because they don’t have access to food,” says Abiramy Sivalogananthan, Sri Lanka Coordinator for the Asia Floor Wage Alliance. “Unions can’t have meetings with the Labour Minister or Labour Commission because of the lockdown so they can’t enact collective bargaining.”

Finally, on the morning of March 27, the 10,000 workers were told to assemble at 6am to board buses and be taken back to their hometowns by the military. The announcement saw crowds of workers waiting outside for hours to board buses. Despite reports of testing for Covid-19, transporting these workers risks thousands of potentially-infected people heading cross-country on packed transport to impoverished villages.

In India, garment production has also been suspended, with factories receiving official orders to close. India’s Government has said that during the shutdown factories must provide paid leave to all workers, but there is a lack of clarity about how or when this will be implemented – if at all – and whether it will differ from state to state.

In Bangalore, the shutdown has affected nearly 600,000 workers. “The State Government of Karnataka has instructed companies to pay the salaries and not terminate any kind of workers either casual or contract, but the management has informed the workers that they will need to compensate for this by doing overtime and working on Sundays,” says Jayaram K R from the Garment and Textile Workers Union (GATWU) in Bangalore.

There is, he says, hope that things will become clearer once the factories reopen, but the re-opening date keeps shifting and workers cannot wait indefinitely.

In Tamil Nadu, factories have also closed. However, the Asia Floor Wage Alliance told HUCK that some home-based production units are still producing, with precarious contract workers meeting together to stitch clothes which are then collected by contractors (though other home-based units have also shut down).

The uncertainty about wages is an escalating problem for an army of garment workers who live hand-to-mouth. “The salary is around 9,000-10,000 rupees (£98-109) per month – without this, survival itself becomes a huge question for a lot of these families,” explains Nandita Shivakumar at the Asia Floor Wage Alliance.

“These are first generation industrial workers in many cases, a lot of them are women workers from village areas and agricultural worker families,” she continues. “This is the first time they are going to the city and into industry. It is very important for them that the garment industry remains because it is about women being able to earn for themselves. We have a huge level of agricultural distress in India and they cannot go back to agriculture.”

Alongside lockdowns and severe wage insecurity, a third problem is cancelled orders. “People do not buy a new outfit to stay at home,” said the CEO of Next as he reflected on Covid-19 and the “unprecedented crisis” for British high streets. Lockdowns and quarantines in the Global North have meant a cancellation of orders from brands on an epic scale: Bloomberg reports that European and US buyers including Primark, have cancelled about $1.5 billion of clothing orders from Bangladeshi factories.

In Sri Lanka, Anton Marcus of the Free Trade Zones & General Services Employees Union says garment factory owners are reporting brands curtailing orders by up to 40 per cent. “Some employees said their brands informed them not to send garments they have manufactured because they can’t take the responsibility and their warehouses are closed and therefore they cannot send funds,” Marcus says. “These employees were told they will be paid salaries for the month of March, but they will not be paid April’s salary.”

Encouraged by financial institutions like the World Bank, countries in South Asia have focused on growing their garment sector. Now, garments make up over 80 per cent of all of Bangladesh’s manufacturing exports, while in Sri Lanka this figure is near the 50 per cent mark. This leaves these economies overexposed – a crisis in the fashion industry now means total national crisis. For the garment industry across the Global South, Covid-19 is nothing short of an existential threat.

So what can be done to mitigate the impact? Meg Lewis at Labour Behind The Label says any solution will require long-term action from governments, factories, and brands.

“Brands have made huge profits by relying on a model which pays garment workers poverty wages and often requires them to work in unsafe conditions,” Lewis says. “This same model has made it impossible for garment workers to put aside savings for an emergency such as this. It is vital that brands step up and protect the workers they have exploited for so long.”

The campaign group is calling on brands to honour existing orders – and for people to pressure brands to do so. Labour Behind The Label argues that brands must help factories ensure workers can protect themselves with hygiene facilities and through social distancing. Any workers who are sent home because of a lack of work or take sick leave should be compensated at their full regular wage and not face negative repercussions.

Anton Marcus agrees with this approach: “There should be a coordinated campaign at a national and international level demanding the government takes responsibility to pay salaries, ensure job security and introduces an unemployment insurance scheme. But the brands and other partners of the global supply chain should also take responsibility by contributing funds to ensure the livelihood of the garment workers.”

“They cannot just cancel orders and wash their hands of responsibility,” Lewis concludes. “There is no other solution to this than that brands pay their factories and factories pay their workers.”

Tansy Hoskins’ new book, Foot Work: What Your Shoes Are Doing To The World, is out now. Follow her on Twitter.

Linkedin
RELATED ARTICLES
OTHER ARTICLES
The author discusses the all-consuming nature of heartbreak, and turning the experience into an incisive exploration of love and loss.
Freddie Miller’s new series of photographs investigates who today’s trainspotters are and what drives their unfettered enthusiasm.
Photographer David Hoffman recalls documenting the extreme wealth inequality around Tower Hamlets and Hackney int the 1980s.
The last few years have seen an increase in LGBTQ-led initiatives to feed the hungry, with many finding ways to stay afloat despite the challenges.
For decades, an area of East London has served as a community hub for Vietnamese people looking for a taste of home.
Photographer Arthur Grace recalls travelling through the Soviet Bloc and finding ways to evade the surveillance of his work.