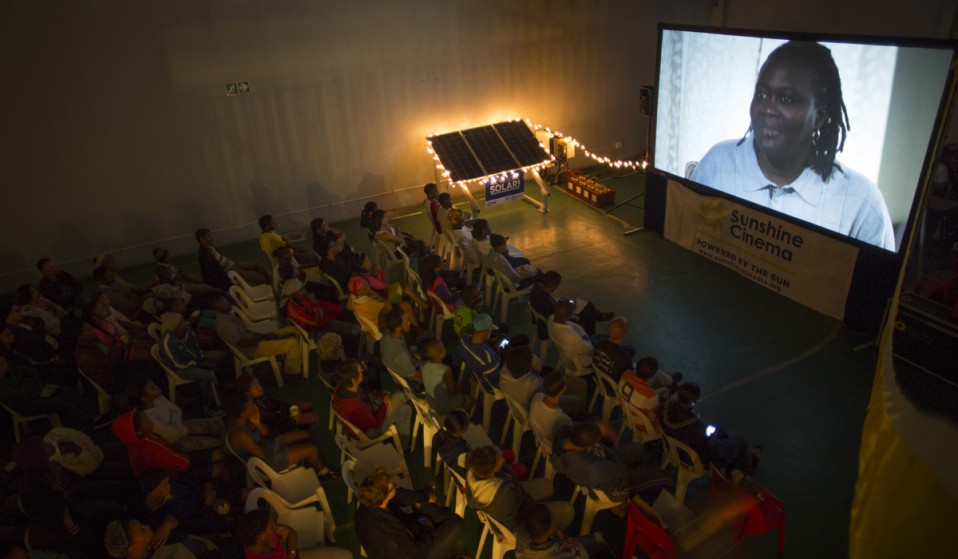 At the 21st International AIDS Conference in Durban, the solar powered Sunshine Cinema crew took films and discussions to communities most affected by HIV.

At the 21st International AIDS Conference in Durban, the solar powered Sunshine Cinema crew took films and discussions to communities most affected by HIV.

Sunshine Cinema – a mobile, solar powered cinema in South Africa – had a long and fulfilling week at the 21st International AIDS Conference in Durban last week, and our crew found its way to an ANC ward party in Umhlanga on Friday night.

We’re celebrating the end of our road trip, having travelled from Cape Town to Durban with our gear housed within our Volkswagen Crafter Van. With the aid of our mobile cinema, and with support from the Open Society Foundation’s Public Health Program, we’ve been screening films all week to young men and women aged between 16-35 in Qunu, Cato Manor, Wentworth, Umlazi and Kwamashu.

The conference ended earlier in the day, so we’re taking the evening off and find ourselves in the middle of a sea of yellow, green and black inside Durban’s Gateway mall. Amidst the gqom emanating from the dance floor, ​drinks and conversation begin to flow, and I start ​talking to two military women ​in their late twenties: a paramedic and a soldier.

​I tell them about the work Sunshine Cinema have been doing around this week’s conference – screening films using our solar powered cinema in communities most affected by HIV related issues in the area.

The films aimed to generate discussion about HIV activism, and particularly the pioneering work done by women globally to spread awareness and understanding. They eagerly tell me about their own work in a male dominated landscape, but particularly about the issue of ‘blessers’, pointing to an older, well dressed man standing nearby. ‘Blessers’, they tell me, are typically older men, who prey on young girls, particularly poor girls, bribing them for sex with mobile phones, handbags and empty promises.

Intrigued, I move to speak to the older man, the ‘blesser.’ He tells me all women are “prostitutes” these days, and the downfall of society came when women started believing they should be treated equally to men. Pointing to a nearby woman he whispers in my ear: “you see that one, when I sleep with her, she demands R1000 in the morning.”

Thinking back to the exhilarating and moving week we’ve had I’m disappointed, but not particularly surprised by his remarks. We still have some way to go when it comes to changing prevailing attitudes about sexual equality, but this week’s conference in Durban, and the films we screened around it, were essential in creating discussion.

Each screening Sunshine Cinema held was organised in partnership with local community centres – around the theme of ‘Speaking to Be Heard’ – with the aim of celebrating the work of female activists.  The centrepiece was Nothing Without Us: The women who will end AIDS, a documentary directed by Harriet Hirshorn.

The key issue raised across the varied screenings was the issue of ‘blessers’. ​Both young ​and older ​women in the crowd decried the manipulation of young girls by older men. They argued​ that​ young women, especially in townships, often face harsh economic and social realities, and are lured into transactional relationships with older men when they may not wish to do so.

​Power dynamics inherent in these relationships, and the promise of financial support often prohibits them from demanding the use of protection: ‘flesh on flesh’ is viewed as best​. Many young men grabbed the mic agreeing with the women, demanding that women need to have more respect for themselves and their bodies​ and that men should abstain, test and prevent​. ​

As the screenings and discussions ended, w​omen in the audience thanked the filmmakers for representing such powerful female voices. They told us that they didn’t expect to see their own struggles with patriarchy, stigma and access to prevention mirrored in the United States, that they had always viewed HIV/AIDS as an African issue.

However, as Charlize Theron highlighted in her powerful key note address at the conference, HIV/AIDS does not discriminate. People do. Again and again, it’s painfully obvious that some bodies matter more than others. Rich people, privileged people. White people. Even as the global rate of infection decreases, the rate of infection for young, black South African women does not. But how can it when young women’s bodies become a means of social capital, their only means of survival in societies where ‘blessers’ are celebrated and young women devalued?

Linkedin
RELATED ARTICLES
OTHER ARTICLES
Rhiannon Adam spent three months capturing an ageing society wracked by division, isolation, and the aftermath of scandal.
The idea that a younger generation is abandoning work has become a popular narrative online, but it doesn’t necessarily reflect reality.
Thousands attended the annual event this year to wheelie through the city and call for ‘knives down, bikes up’.
With skyrocketing rents, packed out viewings, bidding wars and more, renting in London has never been harder.
Dominique Misrahi discusses her unlikely start as a photographer capturing intimate scenes of the city's youth and subcultures.
Cindy Campbell recounts how her brother ushered in a new era of musical culture at a party she held in the Bronx in ‘70s.