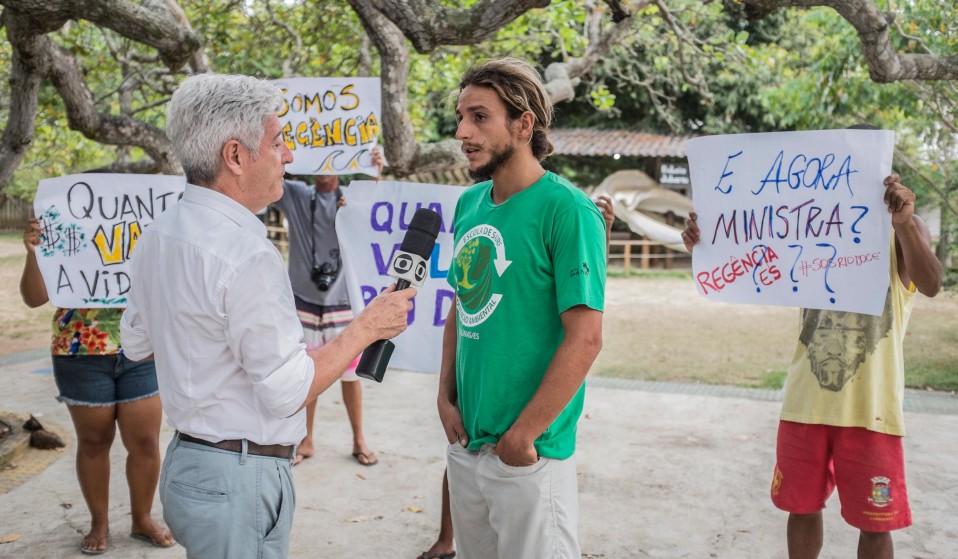 When toxic mud swept across Southeast Brazil, oceanographer and surfer Eric Freitas Mazzei refused to let anyone sugarcoat what was going on.

When toxic mud swept across Southeast Brazil, triggering the worst environmental disaster in the country’s history, oceanographer and surfer Eric Freitas Mazzei refused to let anyone sugarcoat what was going on.

Standing on the soft sand of Regência beach, Eric Freitas Mazzei is feeling nostalgic at the memory of his last surf session. “It was unbelievable! Five-foot, hollow sets, barrel after barrel. I only got out of the water after my surfboard broke in half.” But on that morning of November 21, 2015, a mirthless atmosphere hovered over this world-class beach break, located in Espírito Santo state, Southeast of Brazil. A stream of highly toxic mud was rushing down the Doce River, and would reach the sea later that Saturday afternoon. It was another chapter in the worst environmental disaster in Brazil’s history.

This tragic domino effect was triggered by the collapse of a dam holding 62 million cubic metres of mining waste, which belongs to Samarco, a joint venture of Vale and BHP Billiton. Over sixteen days, it left traces of destruction along 663 kilometres of river. Starting at the city of Mariana, in Minas Gerais state, it covered entire districts in earth, killed seventeen people, displaced thousands, and disrupted the river’s ecosystem. 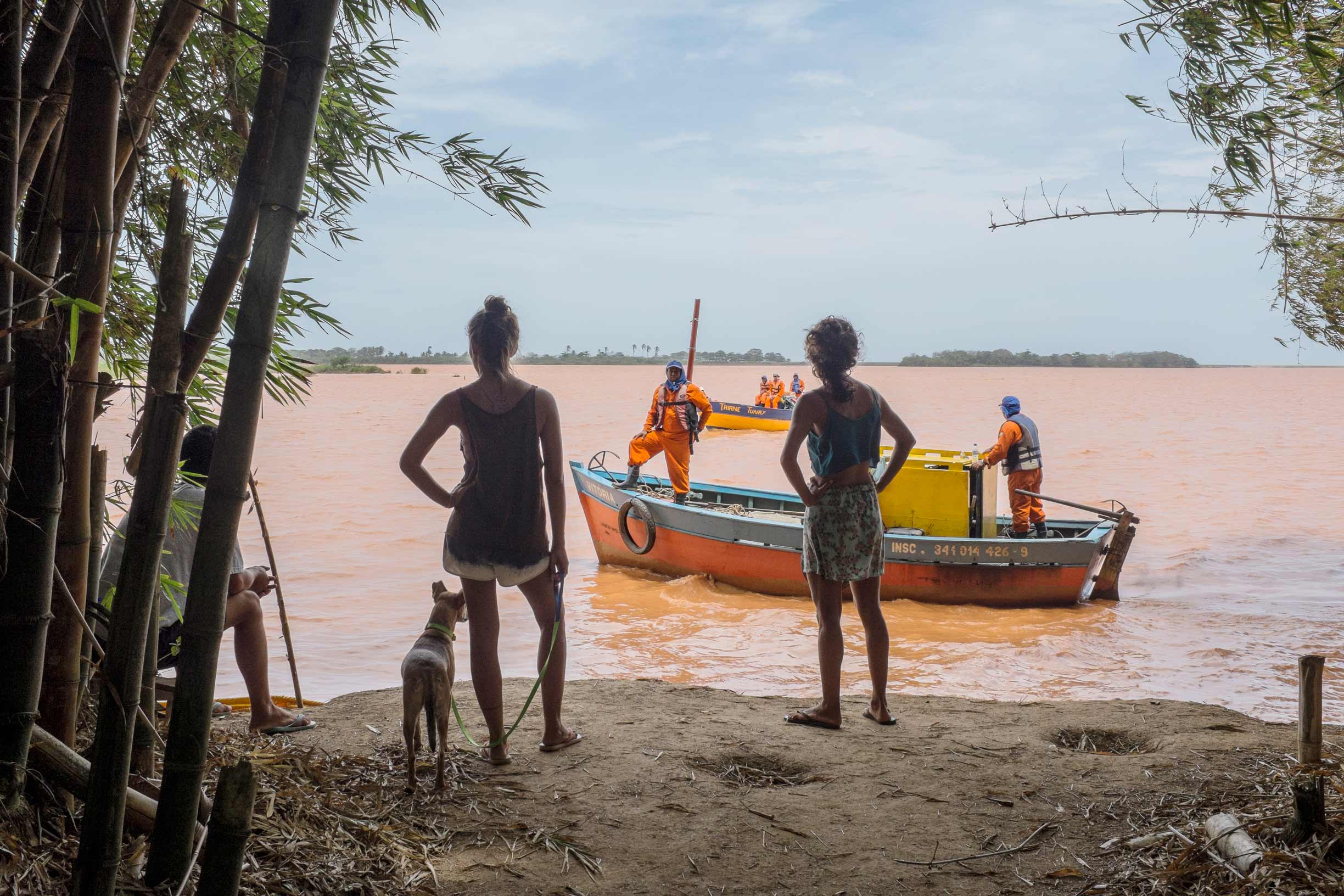 Before the toxic mud, Regência was a peaceful village. Its 1,200 residents relied on the river and sea to earn their living, through fishing, small-scale agriculture and tourism – with this summer pegged to be the best season yet. Eric was counting on that, as he had invested all his money in a new business. In September 2015, he and a couple of friends opened the Bocana Surf Camp on Boca do Rio – the river mouth break dubbed  ‘Bali Cousins’ for its tubular perfection that is a brownish-orange mess today. The government said this toxic plume would spread nine square kilometres then dissipate. But by December 30, it had stretched across 168.2 square kilometres.

After tragedy struck, Eric had the opportunity to move elsewhere, but decided to stay. “I have been living here for three years. Not only have I learned to love this place even more, I’ve also developed family bonds,” says the twenty-nine-year-old oceanographer. Instead, Eric founded Regência Viva (Regência Alive), a group of local activists who are raising awareness about the ongoing threat posed by the toxic mud. “Everything we have that used to be worth something is not worth anything anymore. So how could I help? Through this technical approach, by providing people with information and the right connections.” 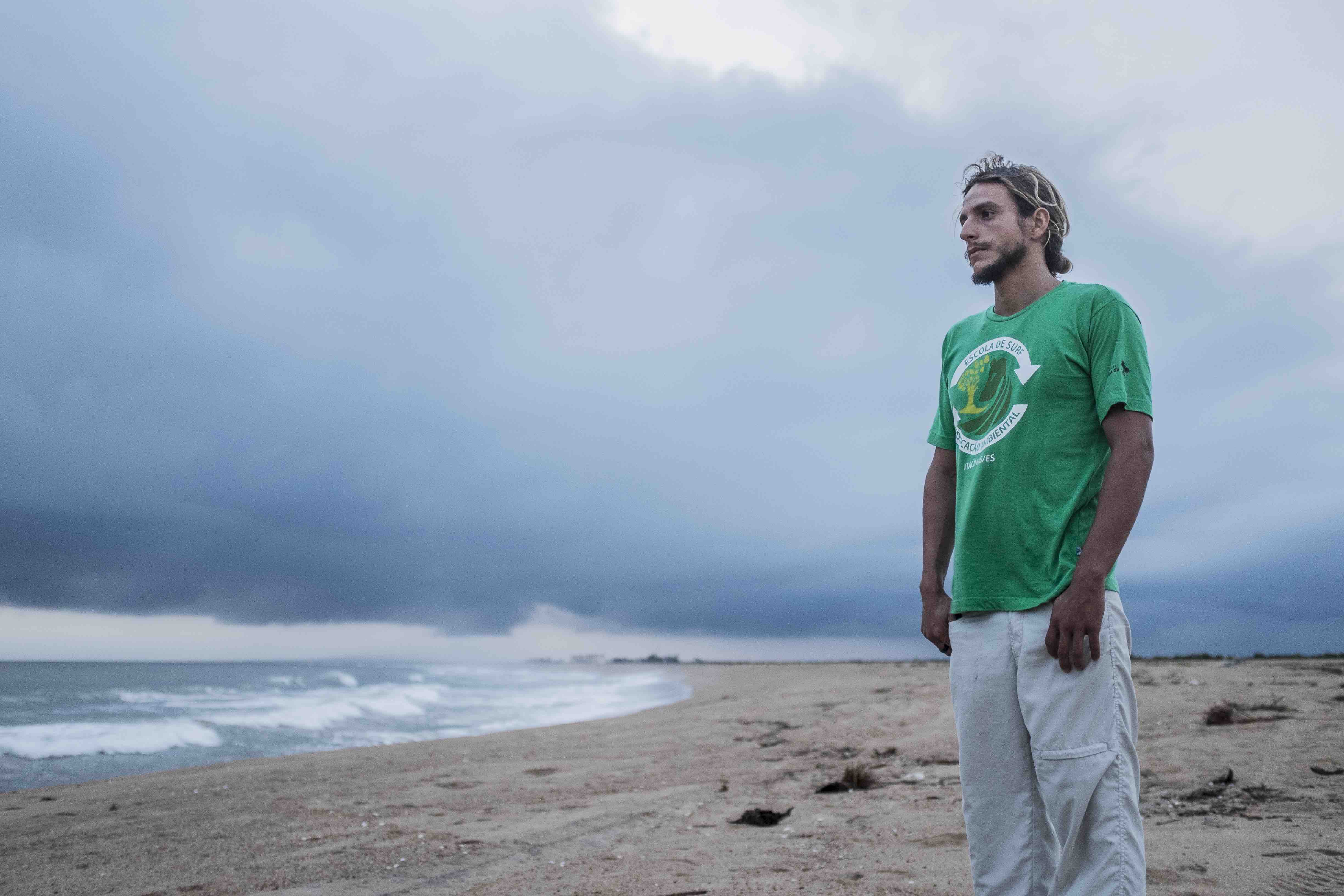 We meet on a sunny December afternoon in Vitória, the state’s capital. Eric is here to attend meetings with the Public Ministry and environmental and activist groups. He’s been up all night writing a report to send to the United Nations, on how the mud could affect Regência’s biodiversity.

He looks exhausted, but talks for an hour about the general sadness and uncertainty that surrounds his peers, and how the state agencies and the companies responsible are trying to keep this environmental crime concealed. “The lack of information is so great that, along with a high level of illiteracy, it makes it easy to convince people by saying, ‘Calm down, nobody is gonna get contaminated – in five months everything is going to be fine.’”

Official reports claim that the level of heavy metals is not high enough to endanger human life, and that the nine tons of fish killed was not due to contaminants, but merely a lack of oxygen caused by turbid water. But birds are dying too, and independent researchers have identified huge quantities of arsenic, lead and manganese in the river. 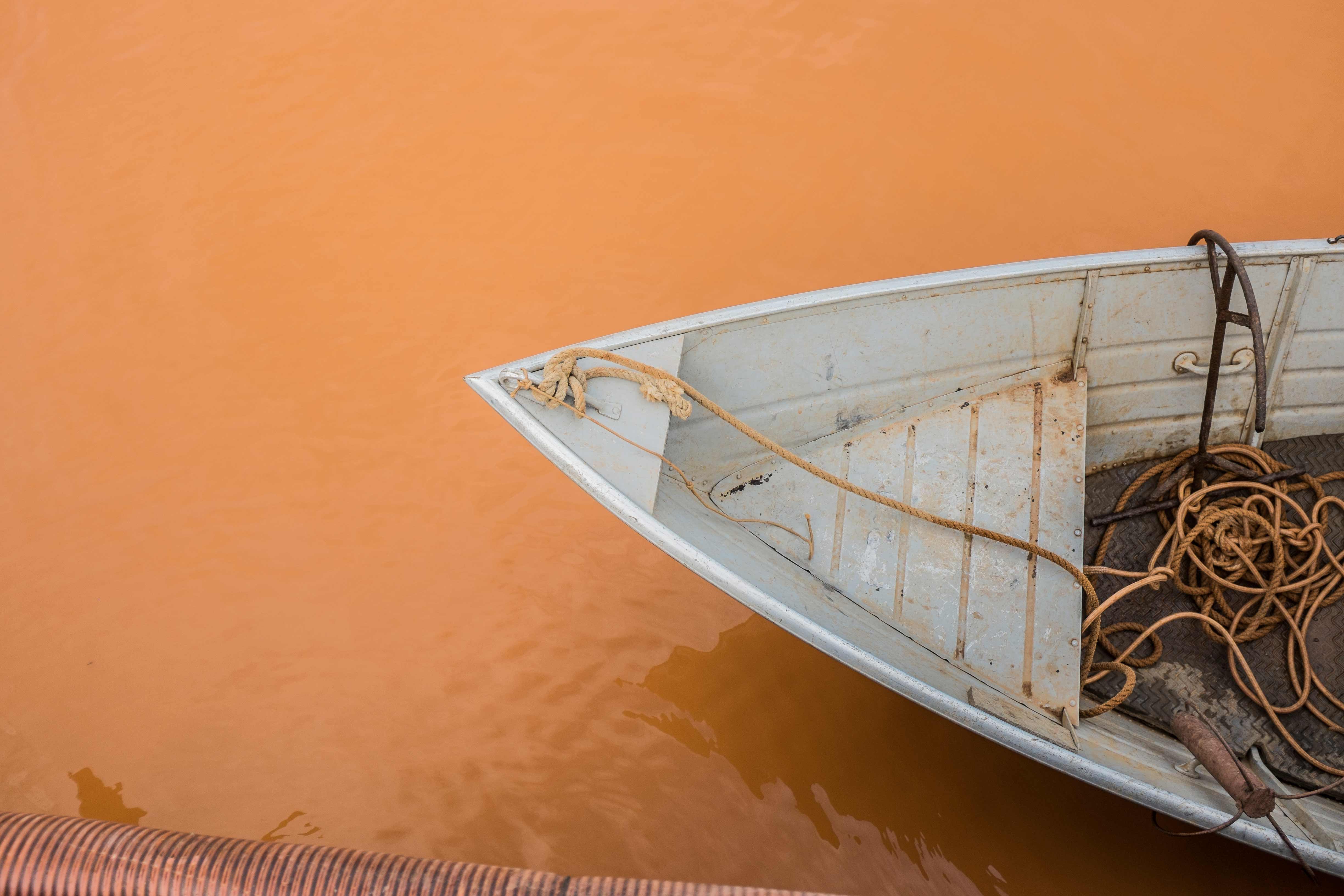 “The urgent action that needs to be taken is to stop the leakage of mining waste in Mariana by closing the dam gates, and getting rid of the toxic material in the river by dragging it offshore,” Eric observes.

By mid-January, the Federal Police are finishing their investigations and have already started prosecuting the big guys responsible for this disaster, including the CEO of Samarco, Ricardo Vescovi. The government, in turn, has filed a lawsuit to demand 20 billion reais (4.9 billion dollars) from Samarco, Vale and BHP Billiton, to be paid over a decade to fund a social and environmental plan. 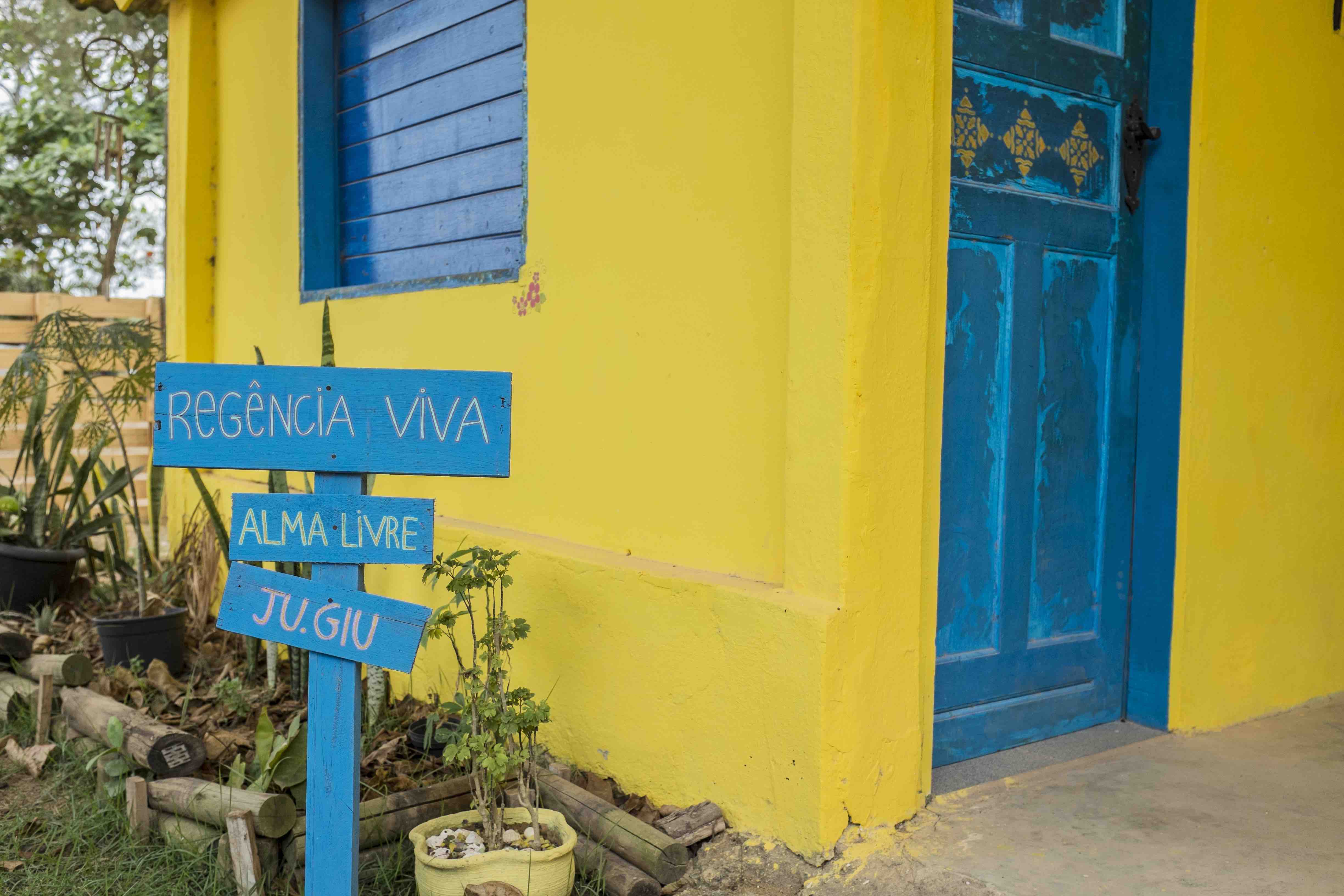 But little has been done on a local level, which is the main purpose of Regência Viva. “Our goal,” Eric explains, “is to give tools to the locals, so they can improve their quality of life and generate revenue from what is left, through sustainable tourism, like ecological trekking and bird watching.”

When he feels hopeless, Eric takes strength from his most recent environmental win: putting a stop to a huge harbour complex project near Regência, proposed by the mining company Manabi. Between 2011 and mid-2015, amid countless meetings with members of the government and Manabi, and people trying to discourage and threaten him, Eric rallied together the local community – and together they won. “This union avoids internal conflicts capable of ruining everything,” he says. 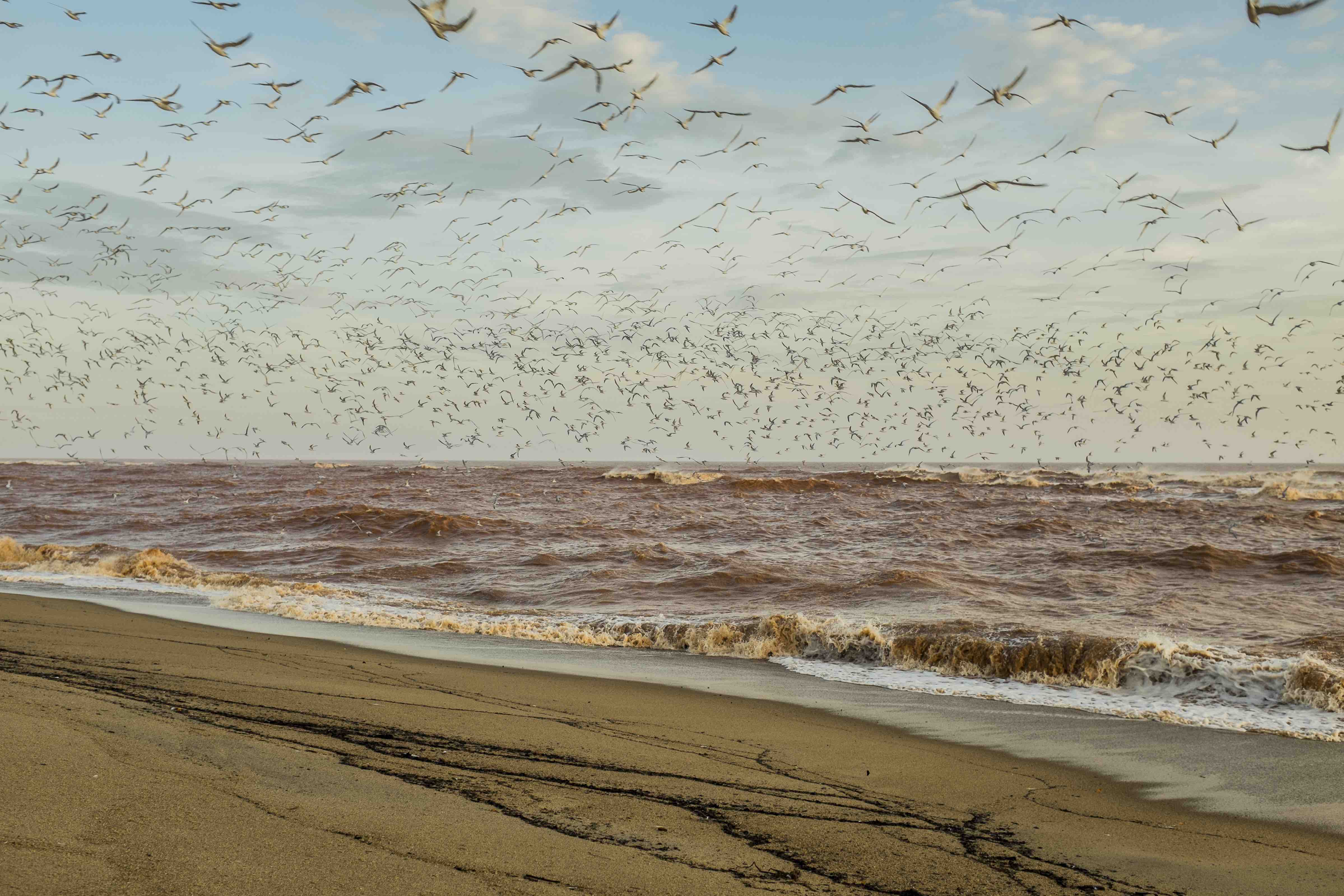 The impact on the community is always on his mind. Eric gets up early on a warm Sunday morning to join a dozen local surfers and shellfish sellers at the Black River Square. He explains to them his concerns when they hit the dirty waves, risking contamination. “That clear water only deludes you,” he says, “because the thin, dense mud has already been covered by heavier sediments on the beach, or it’s been absorbed by the groundwater. Either way, it is still there, running up and down. They want you to feel like, ‘Oh, the mud has gone, let’s surf as if nothing happened.’”

The locals listen in silence to the science, then get visibly riled up by Eric’s speech. “We don’t wanna see Regência falling to the wayside and becoming a ghost village,” he continues. “The message that has to stick in our minds is to not give up, to not think that everything has been lost. We need to be an example of resistance and a paradigm shift, by taking this coma in our history as an opportunity to change.”

This article originally appeared in Huck Issue 54 – The Defiance Issue. Grab a copy in the Huck Shop or subscribe today to make sure you don’t miss another issue.

Linkedin
RELATED ARTICLES
OTHER ARTICLES
With the virus now a global health emergency, we must take steps to fight misinformation and demand a swift UK-wide vaccine roll out, writes Phil Samba.
Photographer Bud Glick recounts documenting everyday life in the area, and what it taught him about the Chinese immigrant experience.
Students are being left to languish in unsafe housing, in some cases leading to serious health complications.
From the early originators to the female writers at the forefront of today’s scene, we talk to the artists redefining graffiti’s consciously macho origins.
A new series of photos by Johny Pitts shines a light on communities and subcultures that have all too often been overlooked.
Steel City is often overlooked when it comes to the country's cultural radar despite its role in shaping electronic music.