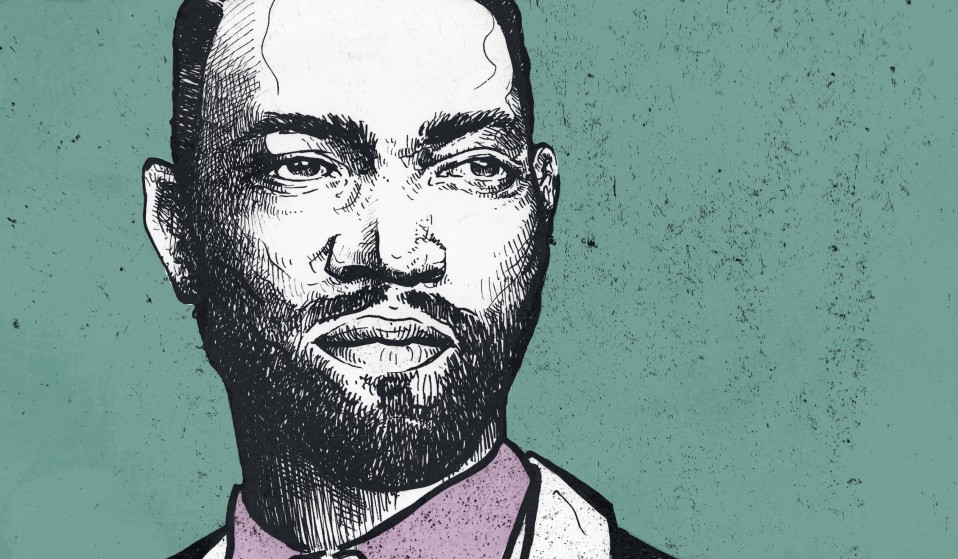 The award-winning American playwright talks racism, Moonlight's Oscar and the struggle of taking on injustice with art.

The award-winning American playwright talks racism, Moonlight's Oscar and the struggle of taking on injustice with art.

On the press night of Tarell Alvin McCraney’s masterful The Brothers Size, in the Main House of the Young Vic theatre, we bear witness to something primordial.

The characters – Ogun, Oshoosi, & Elegba – begin to channel their literal deity antecedents: the heaven-sent brothers of Yoruba creation mythos. One of them draws a large white circle. The stage tonight is to be Ilé-Ifẹ̀ (the cradle of all life in yoruba mythology), and on their backs they spread the red sand to give shape to the earth from which man will emerge; to love, to lose, to fight, and to triumph.

The actors in this deeply affecting, Bijan Sheibani-directed production are at nearly all times confined to this circle: one that can be interpreted as a visual manifestation of those systems which enclose us, riddled with injustices that are always present and that one can never escape from.

The next day, in a small room down the winding back corridors of the Young Vic, I ask Tarell if he still feels that pressure as a black artist to make work that is political.

The 37-year-old, Miami-born writer is undeniably prodigious; in an award-winning career spanning over a decade, the Yale School of Drama Alumnus has produced a number of skilful and acclaimed plays including a number of RSC adaptations, and runs at our own Royal Court. But it is in the last 18 months that his moderate industry success has transformed into universe shattering fame.

In Moonlight Black Boys Look Blue is a semi-autobiographical script, written by Tarell at the tail-end of his Yale career. It faced a personally-imposed bottom-drawer hiatus while he pursued other stories, but was the precursor to Moonlight, the genre defining queer black bildungsroman that won the Academy Award for Best Picture in 2017,  and propelled McCraney’s star into international acclaim.

First Performed in 2007 at the Young Vic, which would play home to it’s revival, The Brother’s Size, explores similarly to Moonlight, how blackness, queerness and poverty intersect and conflict the lives of its protagonists. It’s a reckoning with the weight of identity, and the desires of young, black men to live fruitfully faced with insurmountable obstacles and a lack of opportunity.

“When I wrote The Brothers Size, I certainly wasn’t thinking about the political,” Tarrell tells me. “I was thinking about the institutions that were framing my life at that moment and the kind of trauma that was between them, and how could I fix them.”

The play tells the story of brothers Ogun and Oshoosi Size, following the former’s release from prison, and the latter’s well meaning but overbearing desire to keep him on the straight and narrow. But with little to no provision for rehabilitating the incarcerated, finding happiness and fulfillment outside of prison walls proves a monumental struggle.

Tarell is no stranger to the wickedness of the carceral state. The imprisonment of his brother over the course of his youth formed some basis for the central dilemmas of The Brothers Size. “I was thinking that my brother is in prison, that I can’t get him out,” Tarell says of his writing process. “I was thinking that the way in which the law works is not to his or my benefit. That the life we lead, though we want it to be intimate and full of care is not, is often full of violences, violences on each other, in order to be corrective. And I don’t know what to do about that.”

Tarell’s work has explored a plethora of themes: how black lives collide with violent instruments of the state; how they collide with the metaphorical brick walls hindering progress and socioeconomic advancement; how they collide with each other, and perhaps most painfully, the million and one collisions that happen within them.  “I still don’t know what to do about it,” he says.

“I wrote [the first draft of Brother’s Size] when I was 22, and I’m now 37, and the questions still in the play still are unanswerable, and killing people, and hurting people, and destroying families and the fact that that still happens.”

Tarell’s words, more than portraying resignation, reveal a commitment to asking the hard questions for as long as they may be asked, and as long as the answers about how we might ultimately protect black life from these disruptive, institutionalised forces, and treat it with tenderness, elude us. The burden echoes behind his words, but he has leaned into the burden – not just understanding the magnitude of this great work, but committing himself matter-of-factly to it.

The critical success of Moonlight has unsurprisingly caused audiences and critics to reexamine Tarell’s body of work. The Young Vic’s Brothers’ Size is the latest revival that has taken place over the last few months. Last summer, the National Theatre put on a rehearsed reading of Wig Out!, McCraney’s still fresh and incendiary play about the intricacies and politics of ballroom culture. Naturally, one wonders if his relationship to these works has changed over the decade since since they were written. 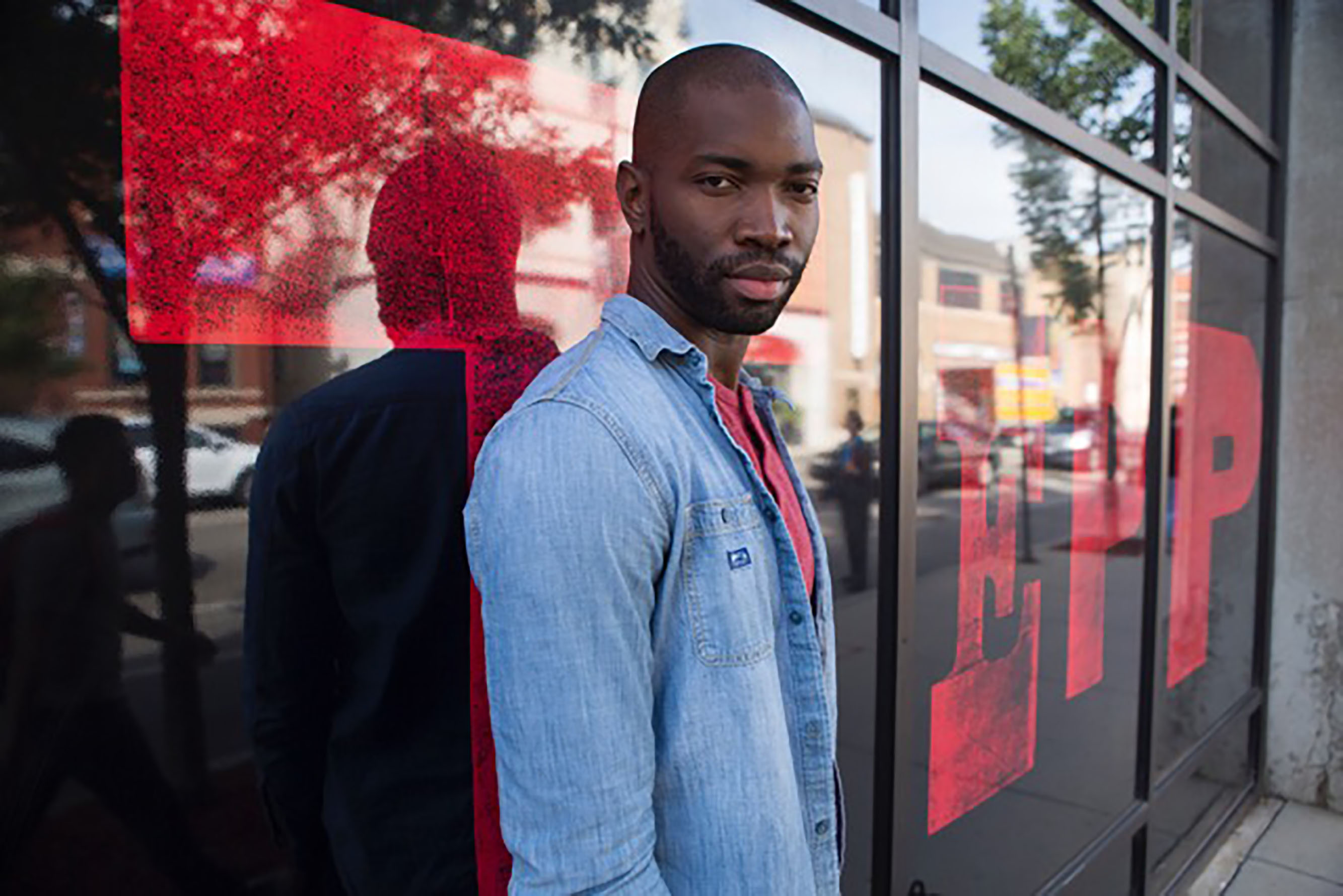 “Sadly [it hasn’t]. It deepens… I remember that I watched a version of the play in LA, maybe four or five years ago, on the same night that [they declined to indict the police officer that choked Eric Garner.] It’s just like these moments of conversation with the world haven’t changed.”

According to The Root, out of approximately 10,000 police shootings since June 2007, only five white police officers have been imprisoned for killing someone black.

“I mean wouldn’t it be great to watch The Brothers Size in a world where it was no longer relevant?” Tarell muses emphatically. “Where it was an ancient piece, it was dusty and we could be like ‘Oh yeah, this is what the world used to look like.'”

The acclaim for successful black artists, and in particular those from working class backgrounds is something of a double-edged sword. The individual exceptionalism of successful black people, while wonderful in its own right, must coexist with the continued structural problems their communities face. It’s a strange phenomenon to see oneself buoyed by critical acclaim, and simultaneously see the brick and mortar of your community continue to be reduced to rubble.

When I suggest that he’s arguably achieved the pinnacle of success and artistic merit, I’m met with kind, but semi-sardonic laughter.

“We just aren’t free,” Tarell sighs, shaking his head. “If I get sick for a month, the amount of destabilisation that would happen to my entire family… My family depends on me, as a sort of staple in their lives, and that’s not a bad thing, but I just always have known that. You look at your community and you know that the opportunities coming in and out of your community are hedged on you.”

Hearing Tarell speak you get the unshakeable sense that there’s something quite sisyphean about the task in front of him, and the burden of the successful black artist in America. His voice hardens with pragmatism: “I can wave an Academy Award all I want, it doesn’t stop the gentrification that’s happening to my neighbourhood… (Tarell’s father still resides in the same Miami projects that he grew up in), the school failings, the gun shootings, the kids that have been shot.”

“The racism doesn’t go away because I won an Academy Award. Now I can use that access as best I can to try and help that, but even then, it’s like band-aids. And I think that, that keeps me constantly going ‘I need to do more work’, but I also need to find a way to make sure that that work is for, and healing the community.”

“For a long time, I was guided by the American Dream that if I did up, bigger and out more, it would do that,” he continues. “Then you quickly learn – and going to a mostly-white school you’ll learn pretty fast – you can do all the wonderful you want, it doesn’t afford you anything like you think you will get. So I’m glad that the academy recognised the work of many people to make an incredible thing, and now I will use that recognition to pour it back into the community.”

There’s already been a rap at the door signalling that my time with Tarell is nearly up. In the last moments we have together, I tell him that his desire to heal from his acquired opportunity reminds me of a Toni Morrison-ism on the duties of the newly liberated: “If you are free, you need to free somebody else…”

“Hopefully,” he says, with weariness in his voice. “Hopefully…”

Linkedin
RELATED ARTICLES
OTHER ARTICLES
A group of young Palestinians have found temporary freedom in the act of parkour, reimagining wreckage and ruins as a series of high-octane playgrounds.
Photographer David Corio’s archive offers a glimpse inside a revolutionary era of music and nightlife.
Yesterday thousands gathered outside Buckingham Palace after news of the Queen’s death broke.
A 37-year-old woman shares how her abortion led her to become a clinic worker, and the abuse she’s received in that role.
In his 2008 series, the photographer pictured himself as Angela Davis, Martin Luther King Jr., Malcolm X, and other prominent figures.
With skyrocketing rents, packed out viewings, bidding wars and more, renting in London has never been harder.