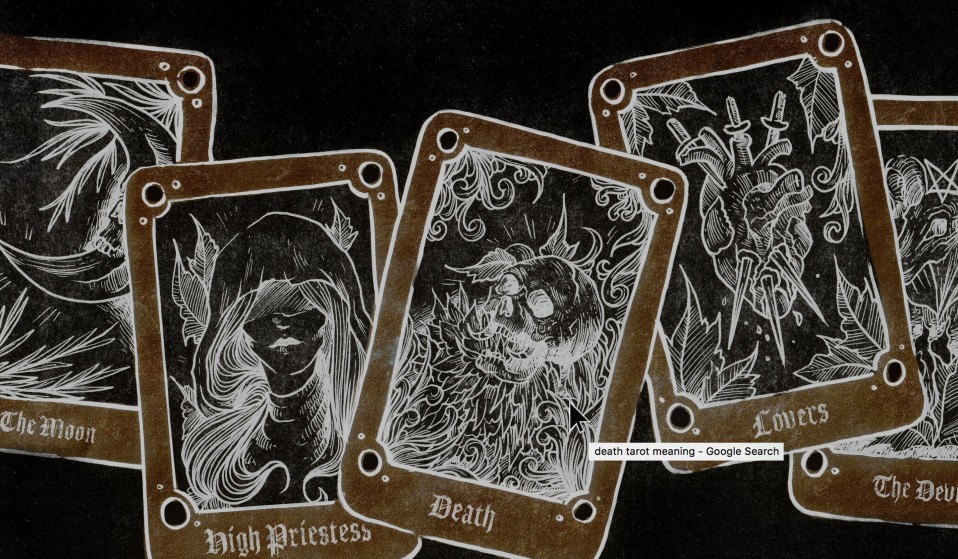 One of the world’s fastest evolving spiritual practises, the Tarot is now sparking its own social media-led revolution. Writer Fiona Lensvelt investigates why so many young people are looking for answers in the ancient cards.

One of the world’s fastest evolving spiritual practises, the Tarot is now sparking its own social media-led revolution. Writer Fiona Lensvelt investigates why so many young people are looking for answers in the ancient cards.

My first encounter with the tarot was as a teenager. Like any gothic adolescent, I dabbled with the cards and found something entrancing in the images in front of me. Cards were brought out at parties when everyone, half-drunk, would take a punt at what the meanings might be. There was no need for accuracy – the more opaque the reading, the more sinister the verdict, the better. After all, that’s where the drama was.

How things have changed. Today, the 14th-century card game has morphed into one of the fastest-evolving spiritual practices around. With more than 2.5 million posts tagged #tarot on Instagram, an ever-increasing number of people are turning to the cards as an alternative method of self-reflection.

“Until recently tarot was something that was hidden,” explains Rachel Howe. The LA-based artist and tarot reader works under the name Small Spells, and has more than 30,000 followers on Instagram. Many of the readings she gives these days are over Skype and have a very different ethos to the traditional reading of cards: the desired effect of a virtual reading, it seems, is “empowering”.

“If you went to an old-school reader, they might try to hustle you and they would probably have a very negative outlook on life,” she explains. “It’s not about empowering you. They’ll tell you something really bad so you’ll give them a bit of money to help you. Today, the meanings of the card are so much more accessible. It’s not about fear, it’s about healing.”

The approach clearly works. US Games Systems, which owns the rights to more than 100 tarot decks, reports that in the past 12 months, sales have increased by 30 per cent – now at the highest point for 50 years. Recently, the art of tarot has worked its way into fashion, with Dior using symbols from the Sun, the Moon, the Star and the Devil in its Cruise 2018 collection.

For Howe, the rise of interest in the tarot is political. “Most of my clients are women, people of colour, queer people,” she says. “I don’t get a lot of straight white men. Because they don’t need it. I mean, they do need it, but they don’t think they do. The people who come to see me, a lot of whom have been disempowered, they realise that they can care for themselves and guide themselves.”

“We’re at a point in society where a lot of people are reclaiming their power, so it makes sense that spirituality is a part of that. Getting in touch with your own spirituality is a huge part of reclaiming your space in culture. That’s where it’s been robbed from you.”

Historically, people – and particularly women – have turned to witchcraft, mysticism, spirituality and the occult in uncertain times. Perhaps it’s no coincidence that so many are turning to the esoteric arts for answers in their lives today, and doing so online, where they can receive wisdom in bitesize form during their lunch breaks.

“If you asked me to describe myself, I’d say I was a rational person,” says Anna, 27, who works in London in marketing. “But then I went through this quarter-life crisis, a relationship came to an end, my flat was up in the air and ‘spirituality’ started to look a lot more attractive.”

For the past year, she has been using Instagram to learn how to read the tarot. “I’m not the kind of person who would have ever paid to see a reader in real life but I started seeing these images of tarot cards online, which are really beautiful, and it allowed me to dip my toe into this world,” she says. “I realised I could probably teach myself, so I bought a pack and started trying it out.”

“One of the lessons the tarot has taught me is to trust my intuition more. What I realised when I started reading the cards was that I had become so used to pleasing others that I had forgotten how to follow my own story; that it was OK when my life didn’t look the way I thought it should look.”

For others, it’s simply a daily practice. Caroline, 27, uses card readings as a mindfulness practice. “I’m not very good at reading my own mental state. I’m always the last person to know when I’m depressed,” says the London-based writer, who has been reading cards for herself for the past couple of years. “There’s a saying that Irish people are impervious to therapy, and I think there’s some truth in that. Tarot helps me confront myself that way.”

She uses Instagram to post about the cards she draws and to connect with other readers. But the practice is primarily for herself. “It feels almost like meditation: something you do at home, on a quiet Tuesday morning, as a way or preparing and organising your thoughts. Deep breaths, mint tea, a careful audit of how you’re doing.”

A tarot deck contains 78 cards that tell a story about what is going on in the querent’s (the person who is being read) life. Each of the cards represents a different figure, situation or characteristic. The Major Arcana symbolises the major characters and plots in our lives and the stages of psychological and spiritual growth we can all travel, if we choose. The Minor Arcana covers the subplots and the details.

It’s proved to be an inspiring framework for many designers and illustrators who have produced decks based on their own understanding of the cards. “My decks wouldn’t have spread in the way they have had it not been for Instagram,” says Portland-based artist and tarot-deck creator, Kim Krans. Krans is the creator of The Wild Unknown, which features illustrations of plants and animals. Originally self-published in 2012, The Wild Unknown rapidly gained popularity through Instagram, where Krans has more than 160,000 followers. In 2016, HarperCollins published a new edition and it rocketed up the New York Times bestseller list.

For Krans, the appeal of the tarot is that it offers people “a mythic way of understanding an aspect of their life that isn’t accessible through a literal lens. That’s what is so cool about the tarot: it pairs an idea with an image and it leads you somewhere. That’s its magic, for me.”

Is this new wave of social media-savvy readers bringing tarot up to date from its Renaissance origins or making it more superficial? “Who are we to judge?” says Krans. “It doesn’t even matter if people know what the cards mean or not, or if they have this deep relationship with the tarot: it’s hitting them in the way that they’re ready to be hit. None of the meanings are fixed. If they were, we’re basically just looking at street signs. A sign is one thing and it is understood. A symbol is by definition infinitely generative in the way that it is understood.”

“This is about the resonance of images and archetypes that can carry us through,” she adds. “The idea of the Empress, the Magician or the Devil – they are universal, primal images. A village in who-knows-where, which has never been exposed to these images, can still recognise the deep archetypes of the mother, their medicine man, the outcast and it connects us to this way deeper, way older arc. When we reconnect with the bigger picture, that can push us forward.”

Linkedin
RELATED ARTICLES
OTHER ARTICLES
Photographer David Hoffman recalls documenting the extreme wealth inequality around Tower Hamlets and Hackney int the 1980s.
Over a dozen Stop Deportation activists locked themselves to each other outside a detention centre to prevent coaches taking those due to be on the Rwanda deportation flight from leaving.
A new edition of a seminal book brings together iconic images of the band onstage in their full glory and backstage in moments of unguarded camaraderie.
In her new book, the author explores the country’s housing crisis in human terms and calls for radical action to address a broken system.
With inflation now at a 40-year-high of 9 per cent, demonstrations organised by TUC took place to demand action from the government.
The author discusses the all-consuming nature of heartbreak, and turning the experience into an incisive exploration of love and loss.