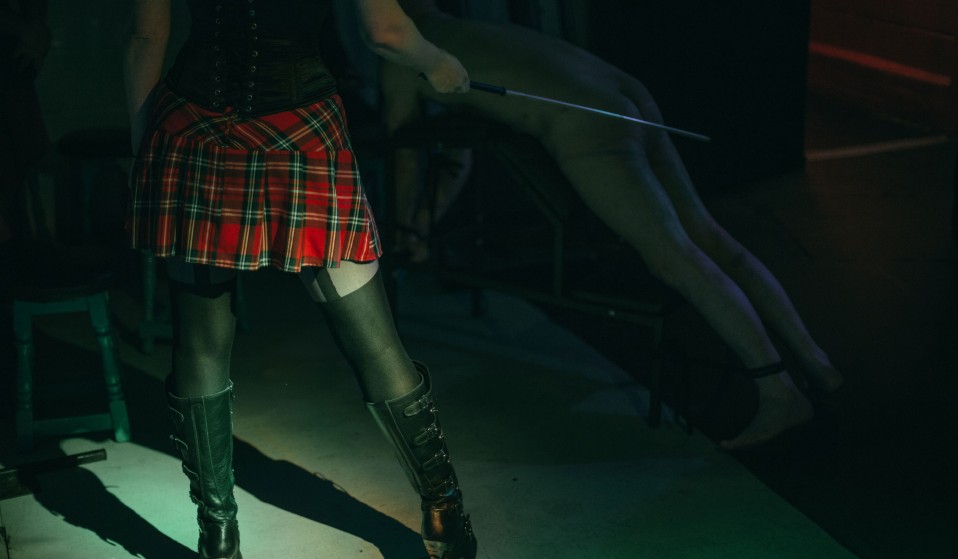 In the dungeon’s half light, you can just make out the glistening metal of a bed-frame covered in chains, piled with restraints and racks of various shapes and sizes. The space feels eerily quiet but as the evening gets into full swing, these rooms will echo with a cacophony of sound: leather striking bare flesh, unbridled moans of pleasure and prolonged screams of pain. 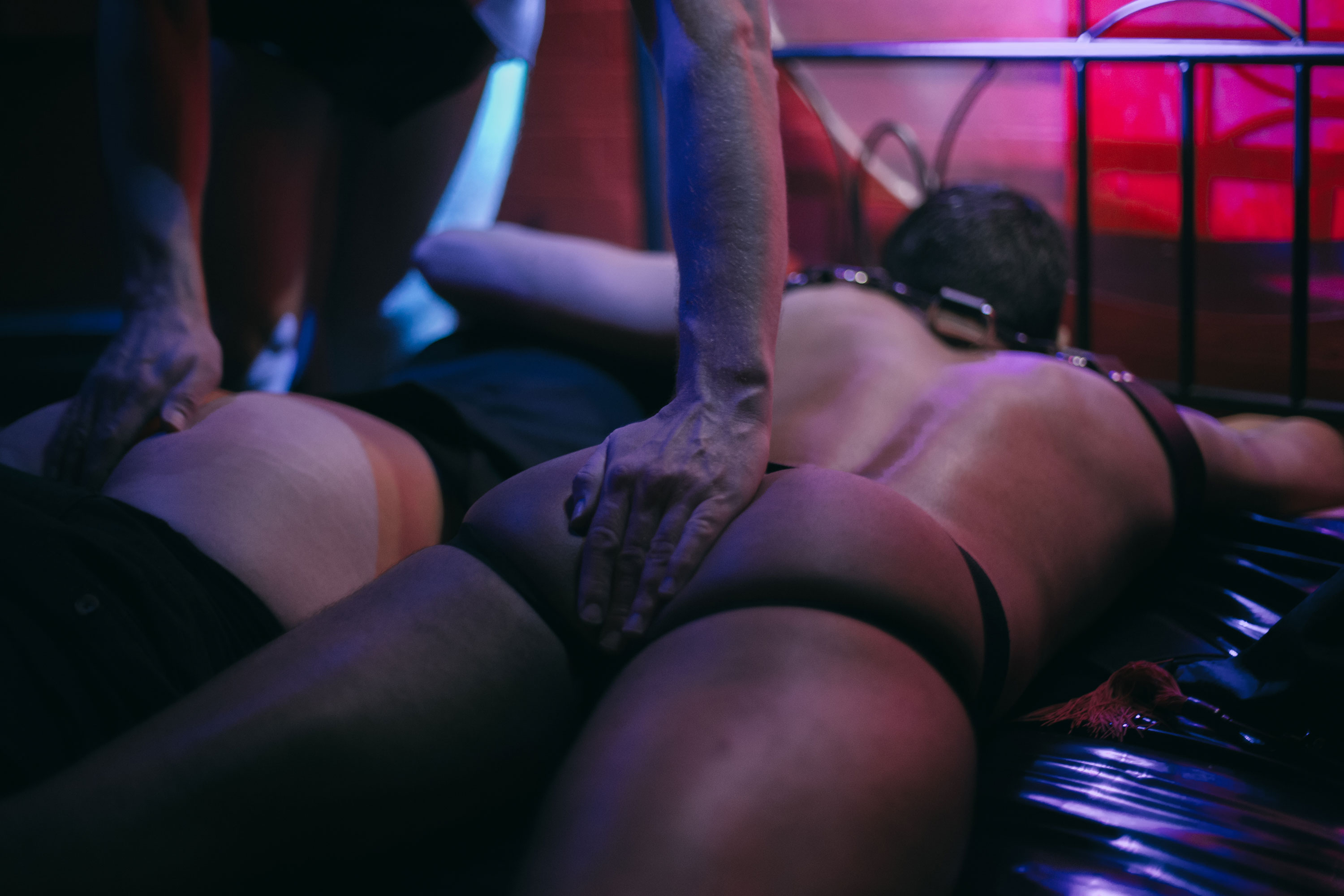 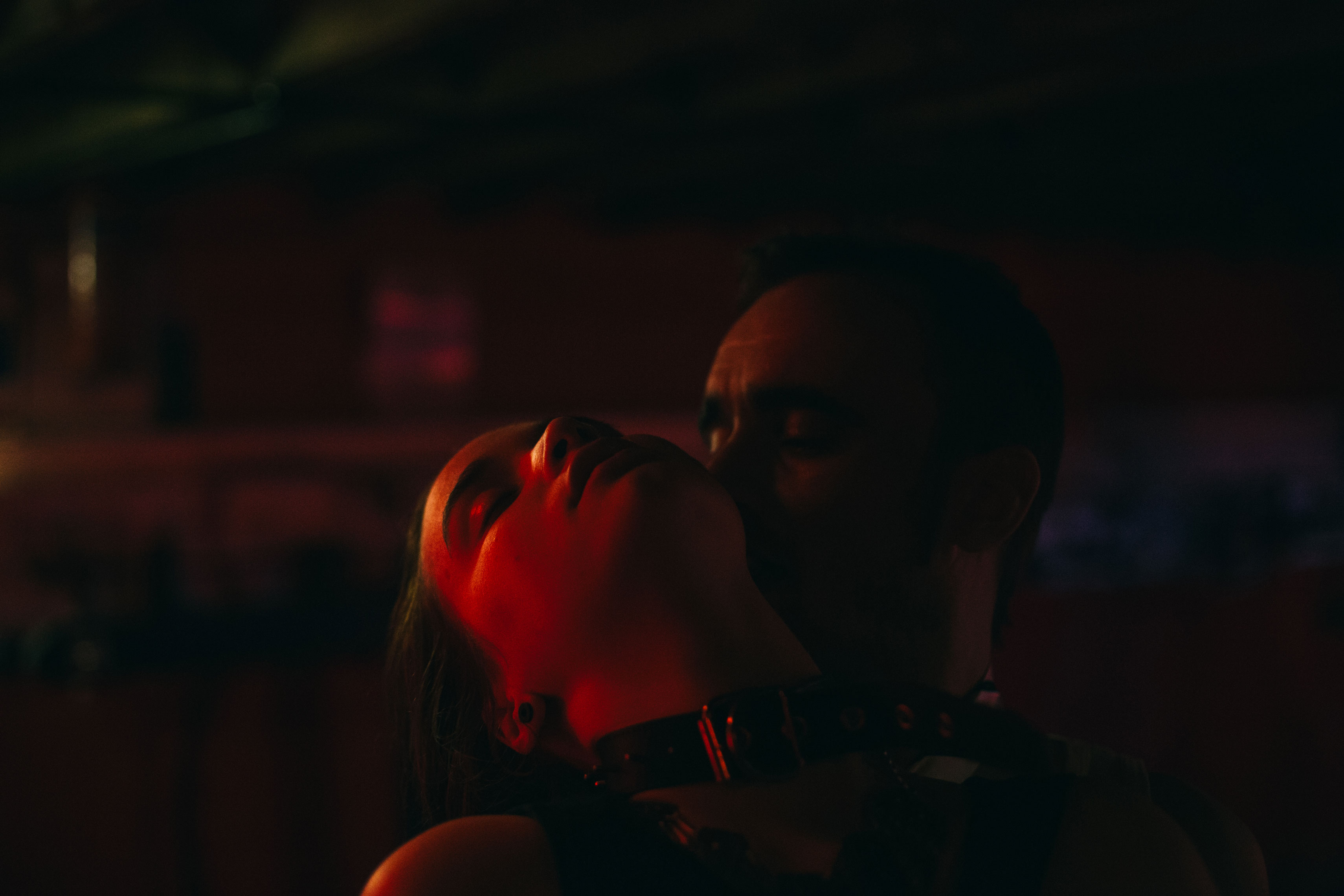 Seventy years ago, she was born in Bow, East London, as Arthur. When his father was out at work, his mother would dress him like his younger sister. There are photos of the young boy in dresses from around age six or seven, which Arthur later cut apart out of shame. Arthur’s father died when he was nine and, by the age of 16, he’d become responsible for his three younger siblings. Outwardly, Arthur remained the hard-working, tough-talking Cockney that everyone expected him to be. But behind closed doors, he would dress up as a woman to help him cope with bearing such enormous responsibility at a young age. 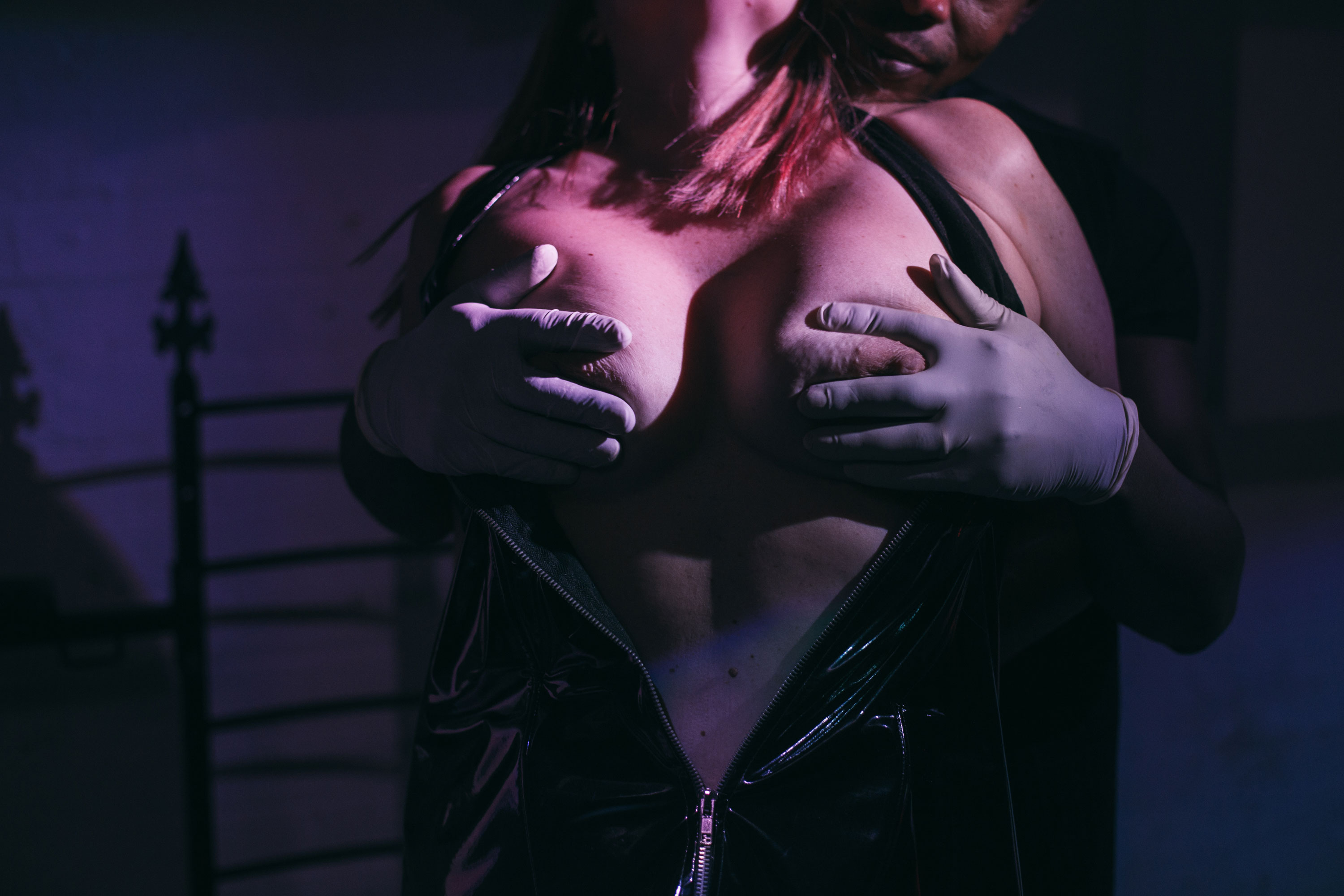 It was a time when being gay was still illegal, Gloria remembers, when wearing anything more colourful than a white shirt would get you labelled “a poof”. Growing up surrounded by homophobia, it felt like the only option was to project a hyper-masculine facade to the world. “That’s what makes you excel at being a male – because you’re always worried about not being quite what people expect,” says Gloria. 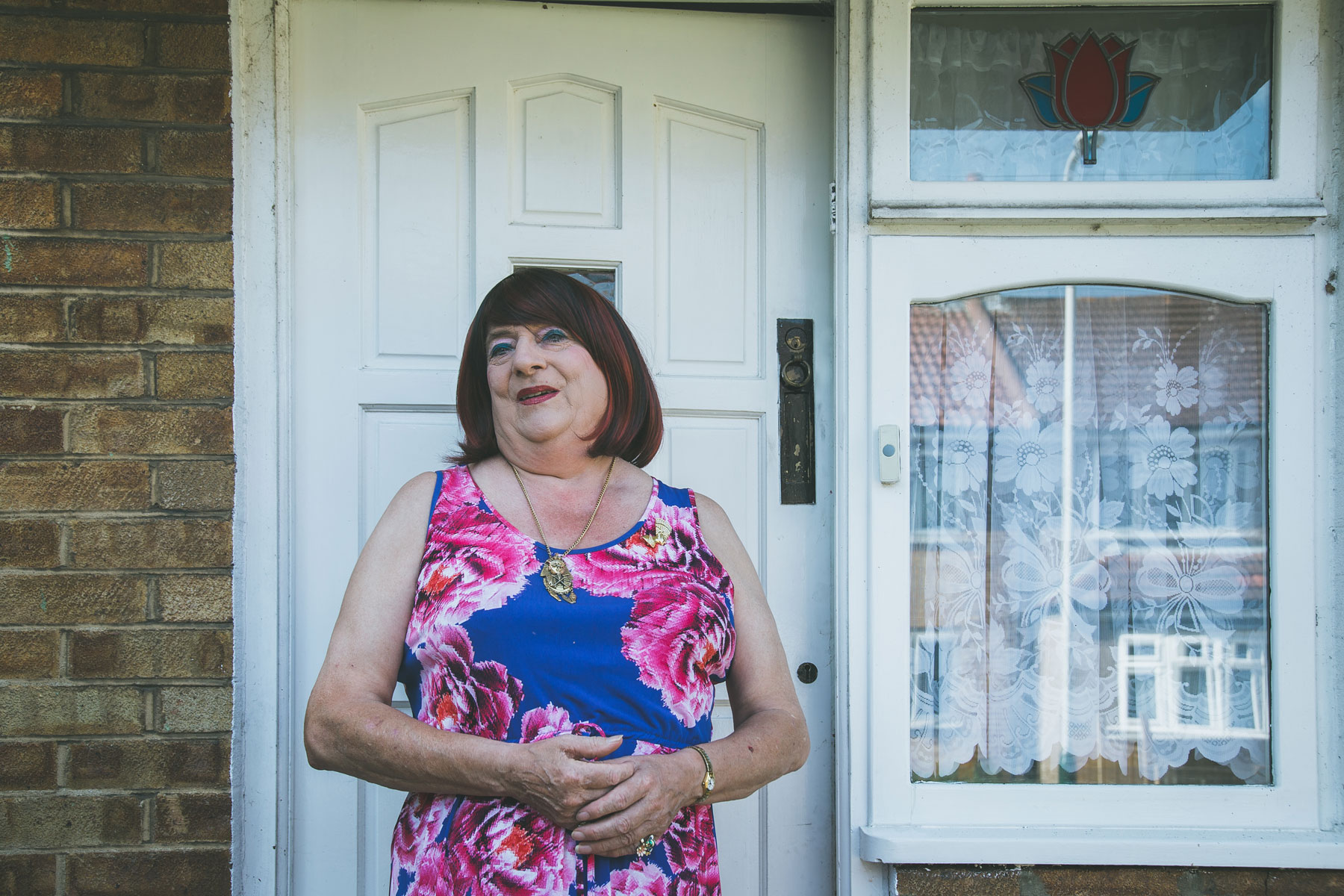 “You’d be surprised how many T-Girls [trans women] become climbers, divers or join the army. They go for the most masculine pursuits just to prove they’re macho. I’ve done the same just by getting into fights.” Like most of her neighbours, Gloria left London’s grimy East End for the leafy, terraced estates of Essex. One thing she brought with her was a love of pigeon racing, a once-popular Cockney pastime. During a tour of her home, she wanders out to the back garden, towards the wooden sheds where about 90 prized pigeons are kept – prompting a flock to burst into the air just as the door cracks open. 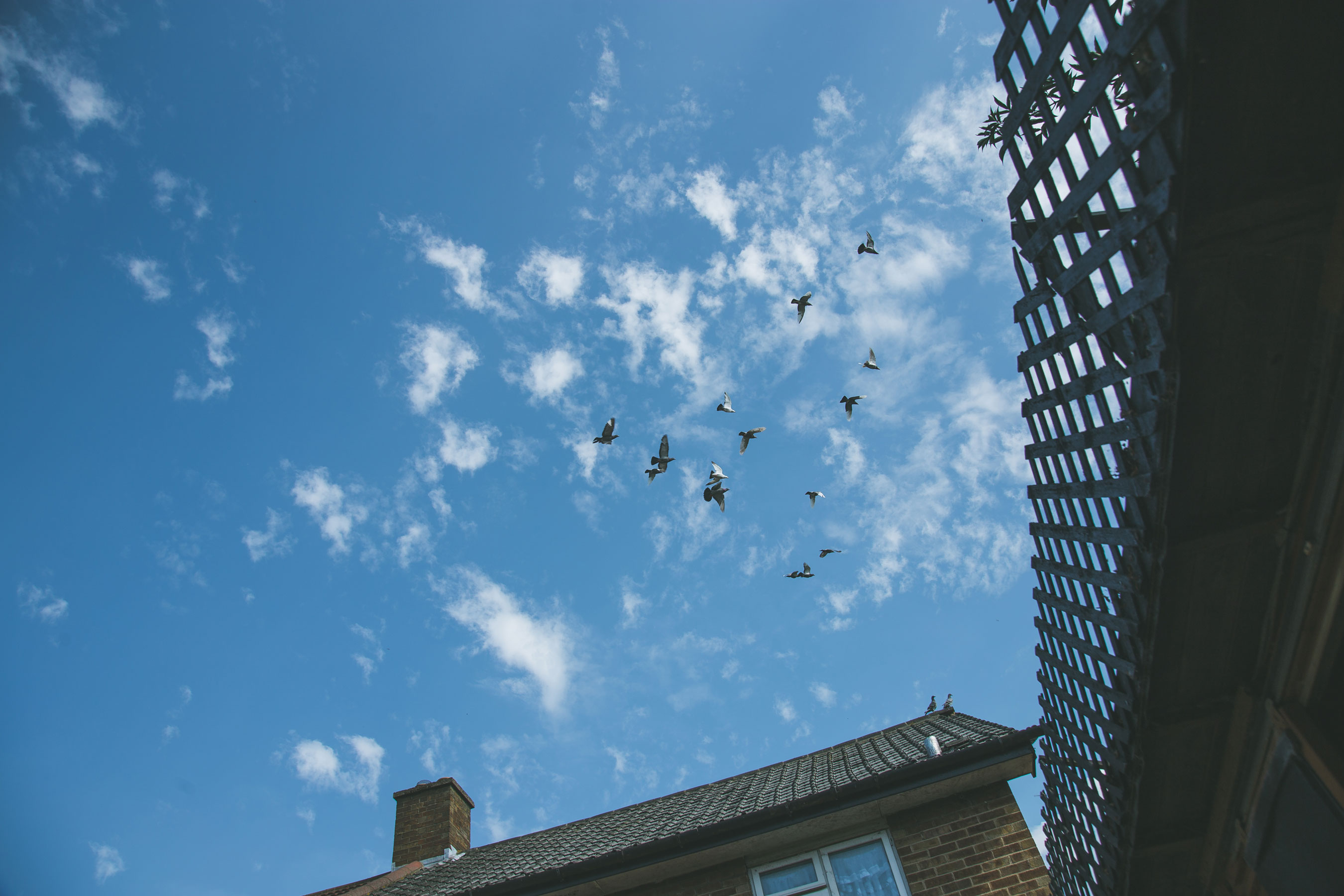 “When you tell people you race pigeons, the weirdest thing is that they always ask how much money you’ve won. They wouldn’t ask that to an angler or someone who plays golf, would they? It’s about the relaxation, innit?” She pauses for a second, carefully choosing what to say next.

“See, this dressing up… for me, it’s not sexual. It’s a stress buster. I can put a dress on, makeup – the lot – and I’m alright for a few hours. My temperament cools for the next few days.” Having been married for 50 years, Gloria’s wife was the only one who knew her secret until she decided to come out publicly 12 years ago. 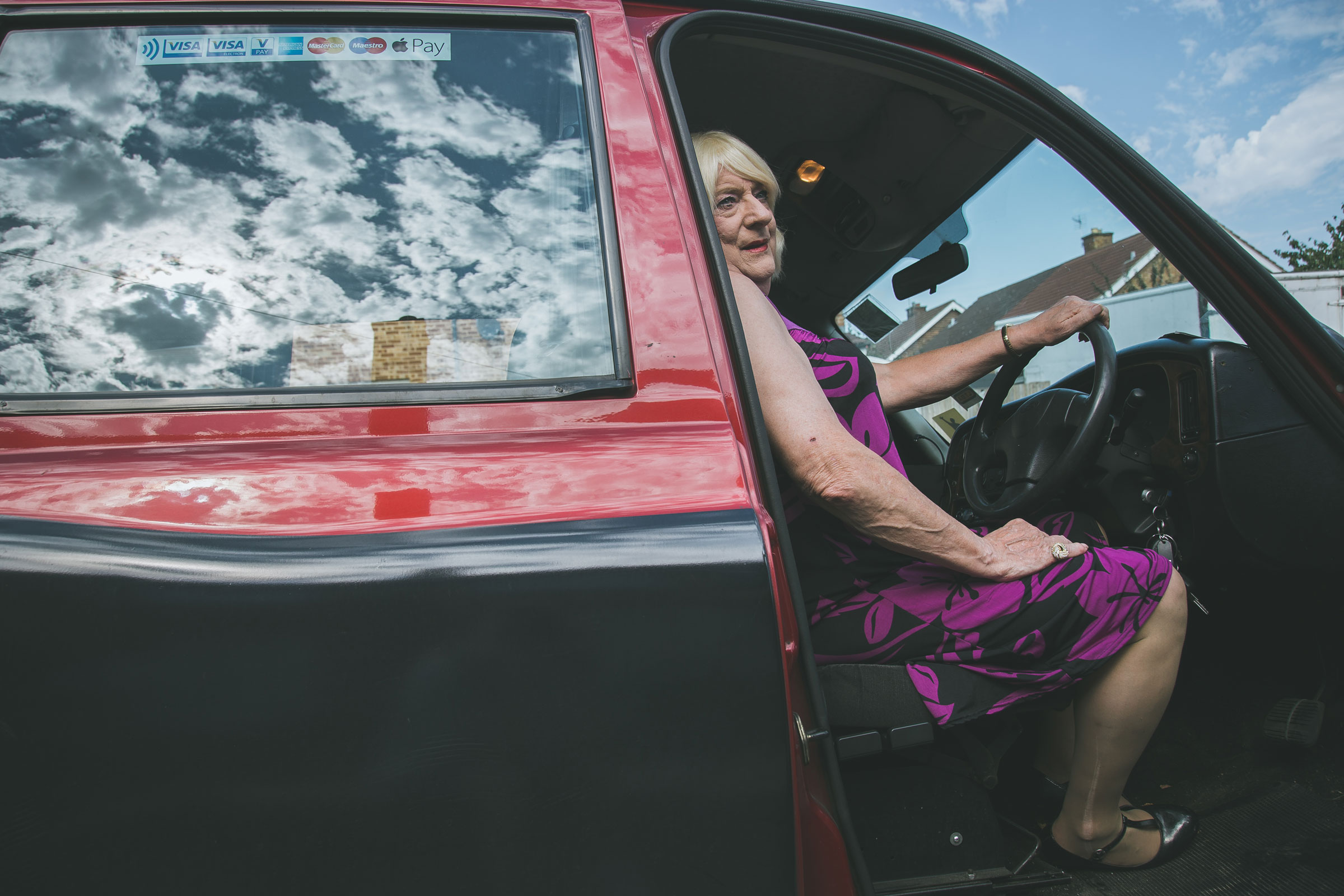 “I was nervous at first,” she says. “It wasn’t easy to break the news to people I’d known for 40, 50 years. But after a while I just thought, ‘Why am I going on like this?’” Today, Gloria does as she pleases. She radiates confidence going to the bank or driving the cab, fully dressed up and holding her head high – ready to handle anyone who pokes fun at her. With the sand from the shed still clinging to her stilettos, Gloria heads upstairs to get changed. Five minutes later, Arthur appears… looking noticeably shorter without the wig and heels.

There’s a whole room devoted to Gloria: wardrobes full of dresses, over 60 pairs of shoes, 40 handbags and an immense haul of jewellery. It’s also where some of the ‘toys’ for Toppers are kept, like the huge metal shackles rattling in Arthur’s hands as he tidies them away gingerly. 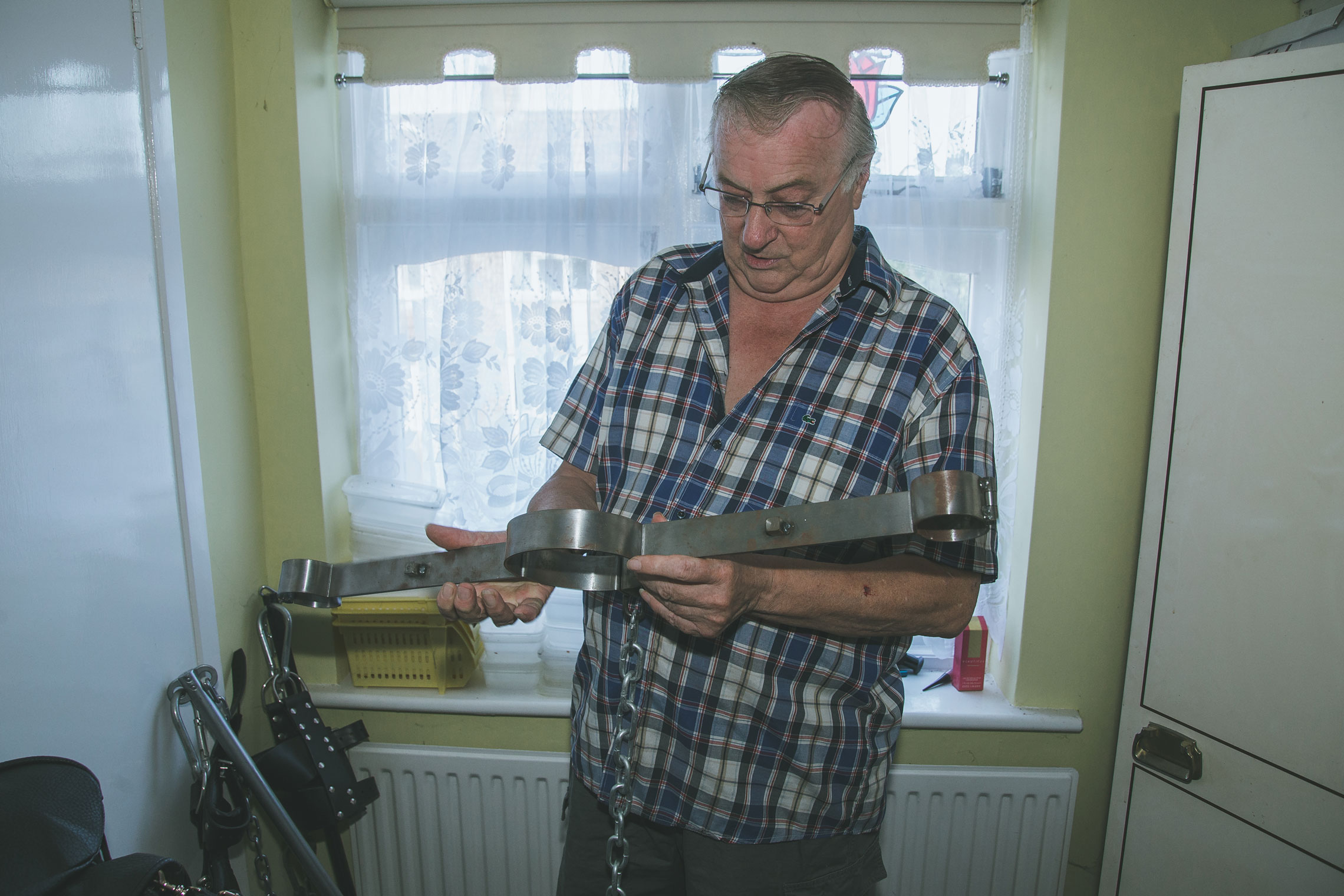 Outside on the landing, there’s a painting of a champion racing pigeon and a photograph of Arthur’s daughter – right next to one of Gloria’s dresses, hanging from a door. To many, this scene would feel like a snapshot of worlds colliding. But that says more about the limits of our stereotypes and preconceptions than it does about Gloria. She doesn’t see it as a double life, a split personality or any sort of contradiction. Gloria is a reminder that rich and multilayered lives exist beneath the surface of everyday people, if only we took the time to hear their stories.

“I still talk and act like a Cockney because I am a Cockney – and I’m proud of that,” she says. “I never change my voice. I don’t want to be a girl or mistook as one. Gloria and Arthur are different people in appearance, but we’re the same person. I am me.” 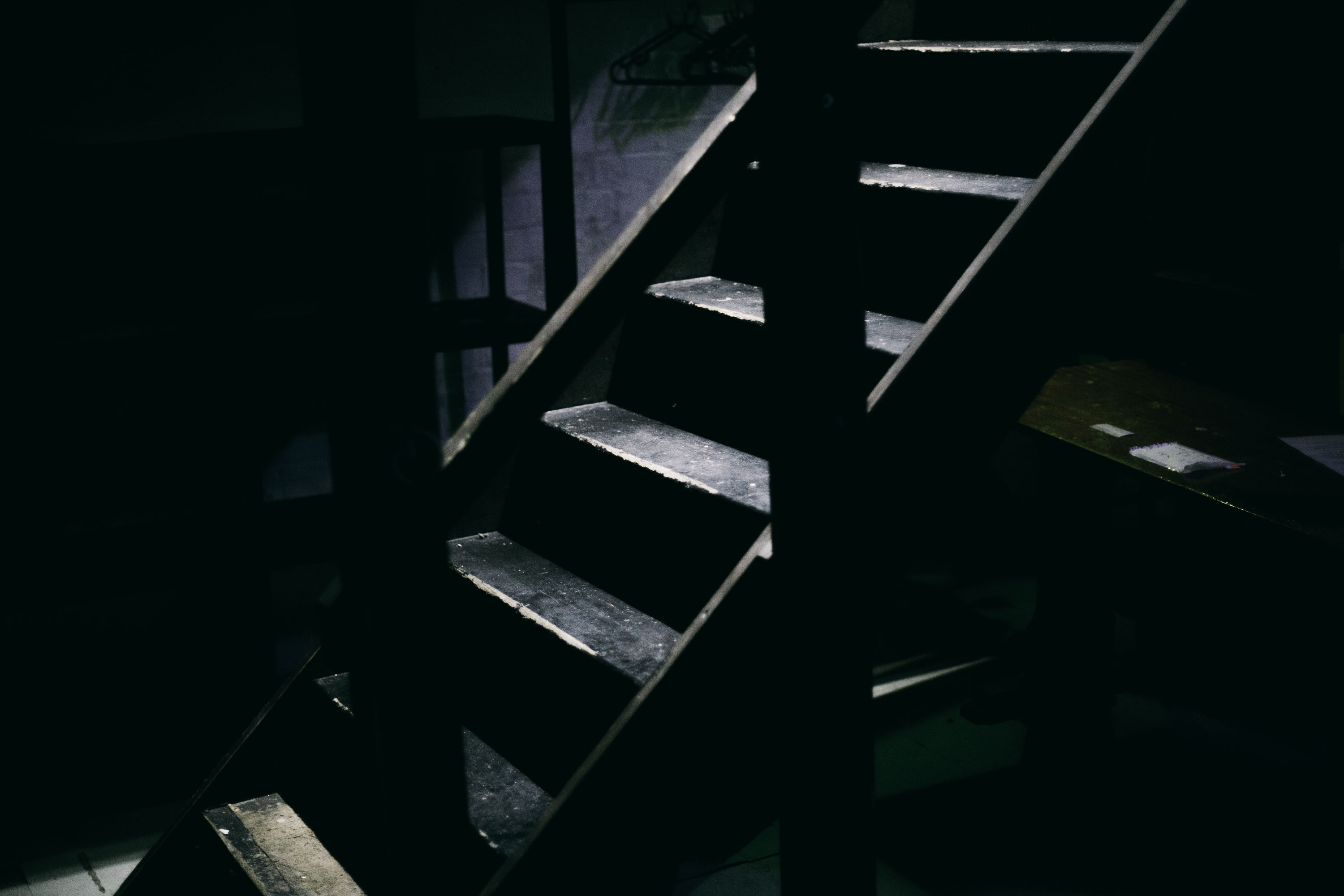 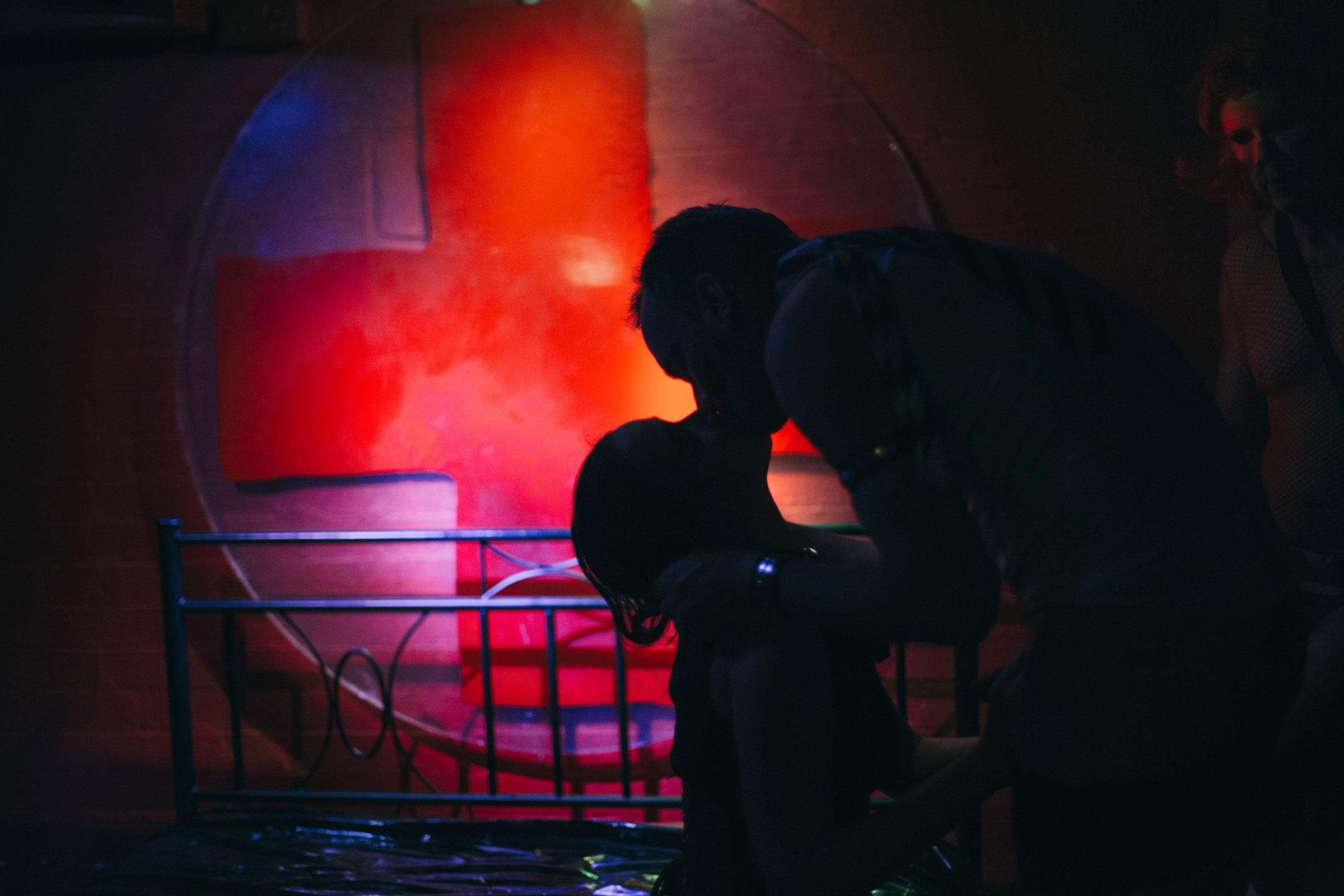 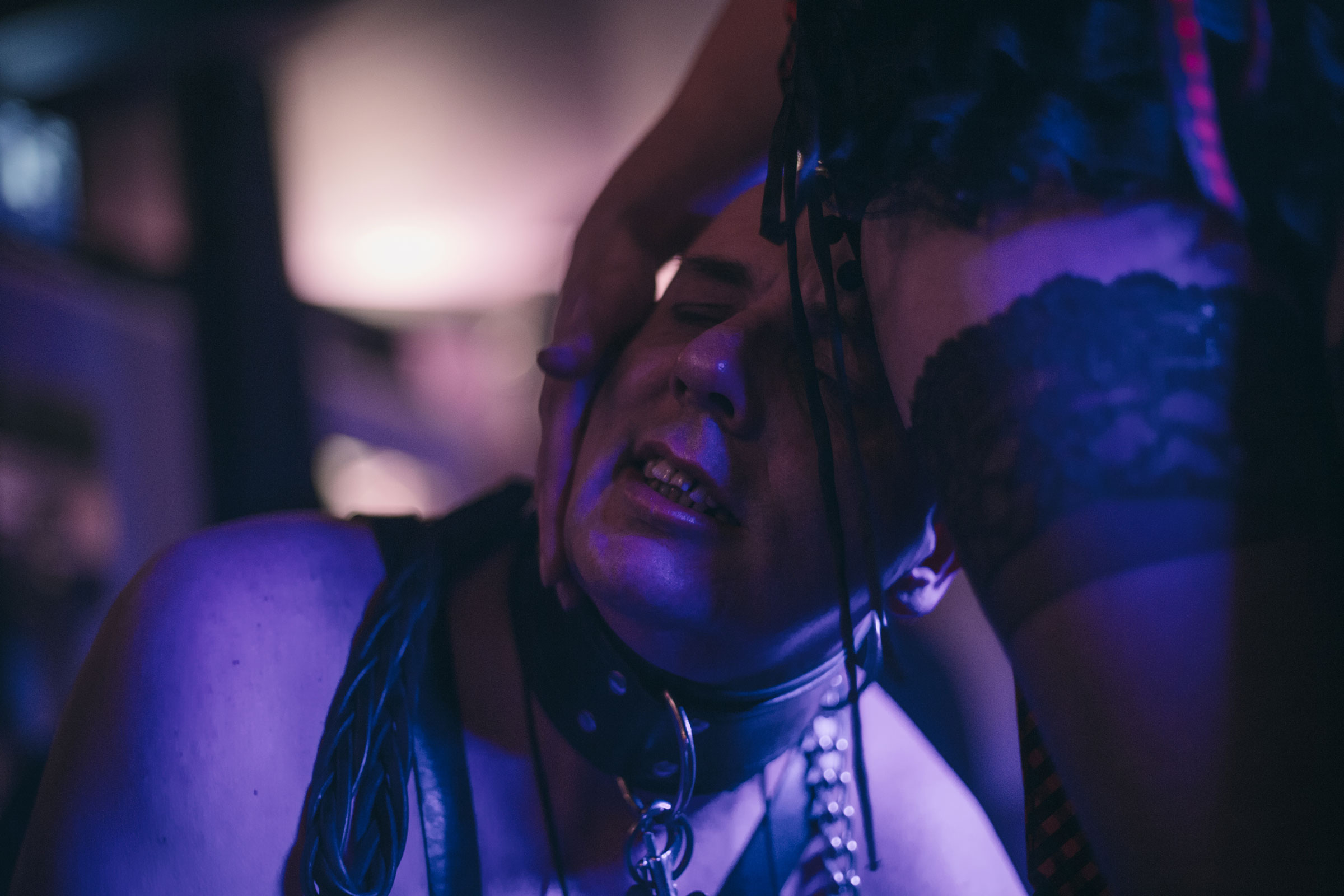 Part of the reason nothing gets out of hand is a man dressed as a giant dog called Rex the Puppy. He towers above everyone in the room, wearing a leather harness and a chrome dog-bowl hanging from his nipples. Cleo is his owner, and while the two are affectionate with each other, he’s totally subservient. “I’m part labrawhore, part hellhound,” he says. “I’ve got a dual role here: socialising but also maintaining others’ safety and wellbeing. I don’t drink, I’ve got fairly good people-skills. “I’m an ex-bouncer and I’m dressed like a fucking puppy. If I tell you to stop doing something, you’re going to stop doing it – or you’re out.” Half of London’s nightlife venues have closed in the last eight years alone, but it’s alternative and LGBT clubs that have been hit hardest. 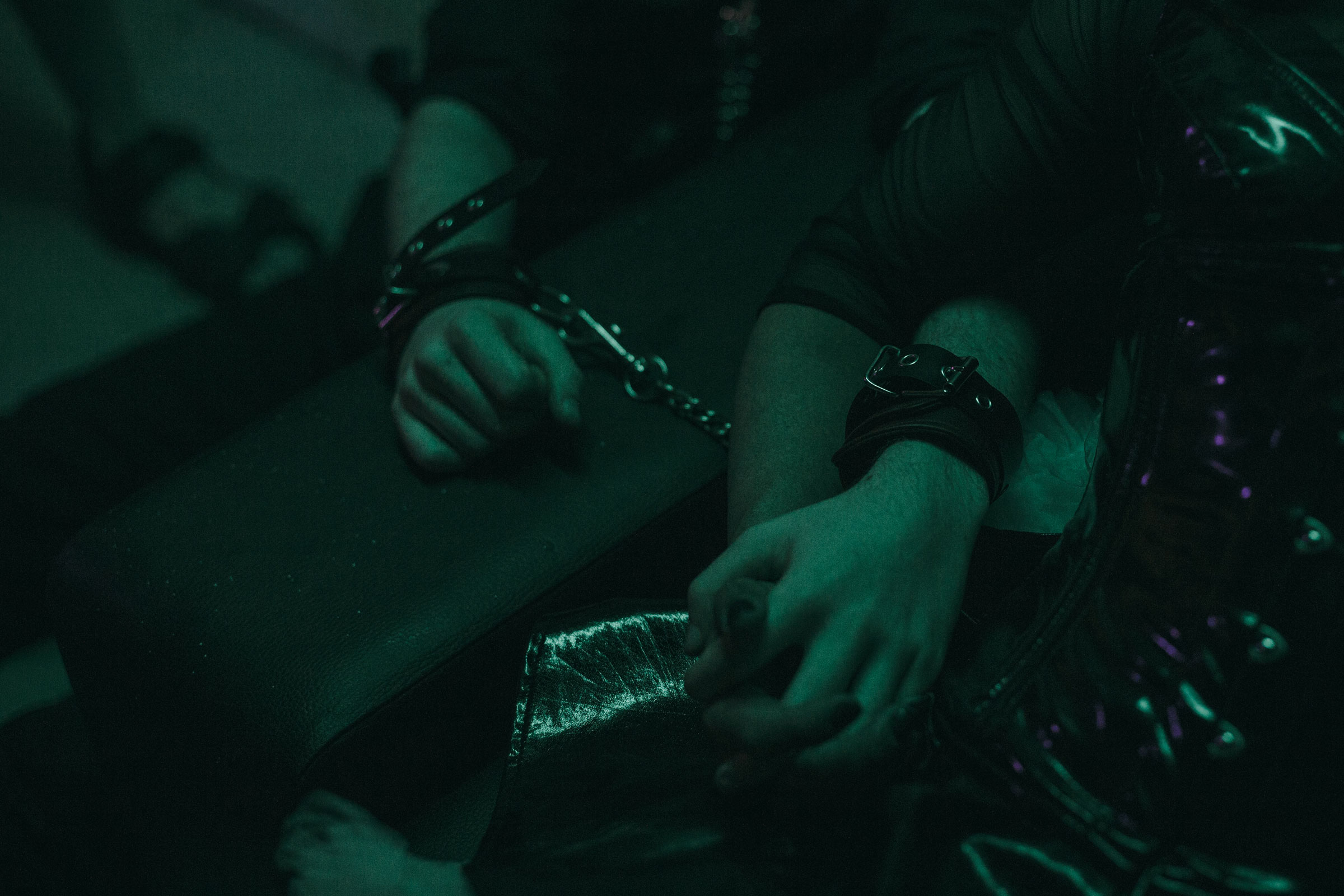 As the night begins to wind down, people emerge from the dungeon looking sweaty but satisfied. It’s a sight that gives Gloria a sense of accomplishment, having worked hard to provide an inviting space that facilitates self-discovery – even if it’s only for a few hours in some pub’s basement. 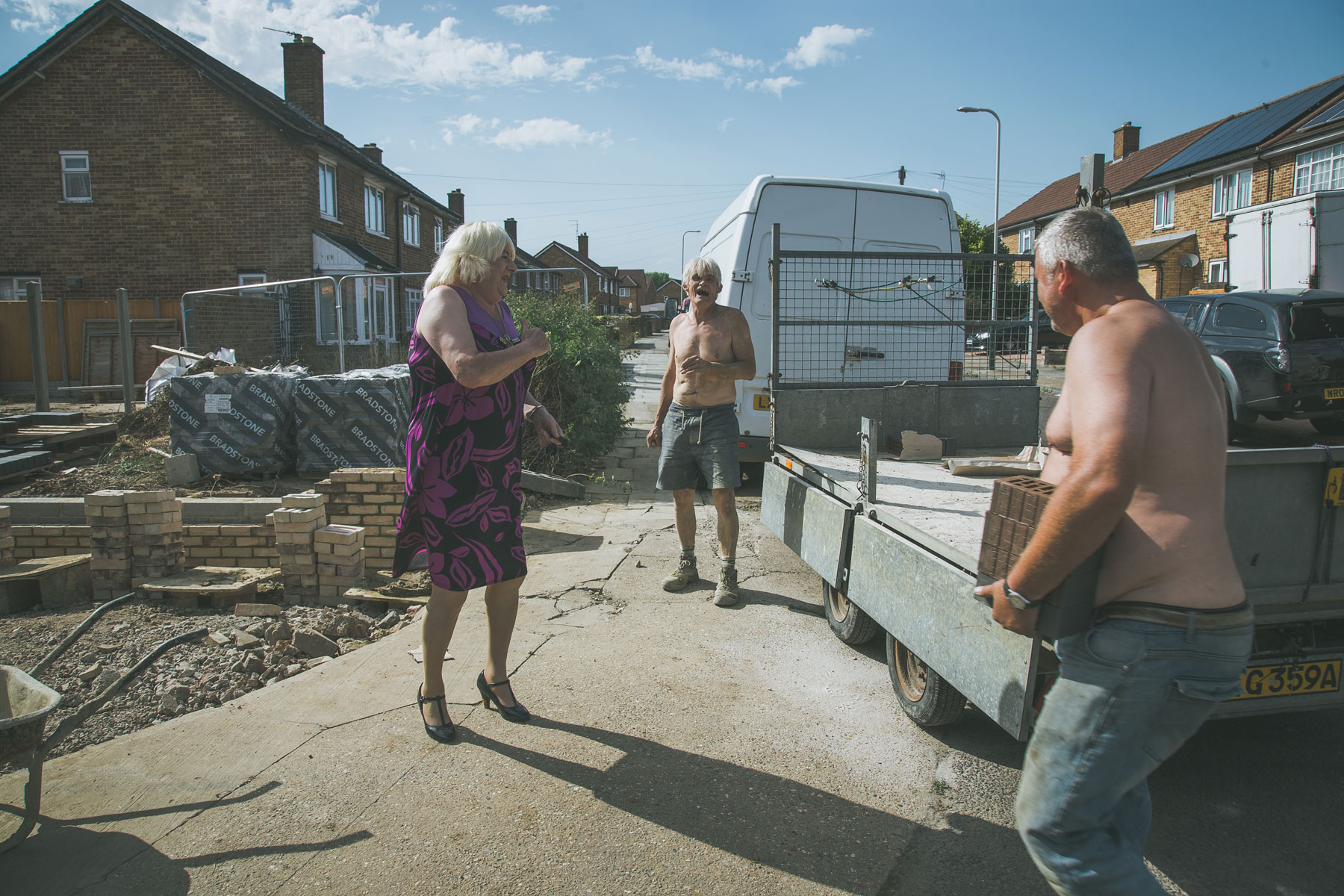 “Before I came out, I had a friend who was 58 and had never been ill,” she says. “But he had a major heart attack which very nearly killed him. I thought, ‘He could have gone just like that and here I am, still hiding away, dressing up indoors.’ “Now everything’s out in the open and I can’t understand any reason not to enjoy life. My wife always asks me what I get out of it and the answer is that I do all this for other people, to give them somewhere where they don’t have to hide who they are. “My role is to try taking them one step further than they even thought they were capable of.”

This article appears in Huck 58 – The Offline Issue. Buy it in the Huck Shop now or subscribe today to make sure you never miss another issue. Enjoyed this article?

Linkedin
RELATED ARTICLES
OTHER ARTICLES
Social prescribing connects people with non-medical support to improve their health and wellbeing – but some experts worry it’s just a stick plaster solution.
A new law change is enabling Britain’s donor-conceived children to know the truth about their origins – but campaigners say the fertility industry must do more to protect people.
A new exhibitions brings together the work of photographers who documented the deep unrest of these pivotal decades.
Photographer Sean Maung reflects on documenting a small town in Pennsylvania afflicted by high levels of unemployment, poverty, violence, crime, and addiction.
Filmmaker Laura Poitras discusses her new documentary which traces the remarkable life of the artist-activist and the impact of her battle against the US opioid crisis.
A recent High Court ruling against the right to wild camp in Dartmoor National Park sparked the largest land protest in history – and campaigners say their fight is not over yet.