Art & Culture / Tech / How we experience love, sex & intimacy in the modern age 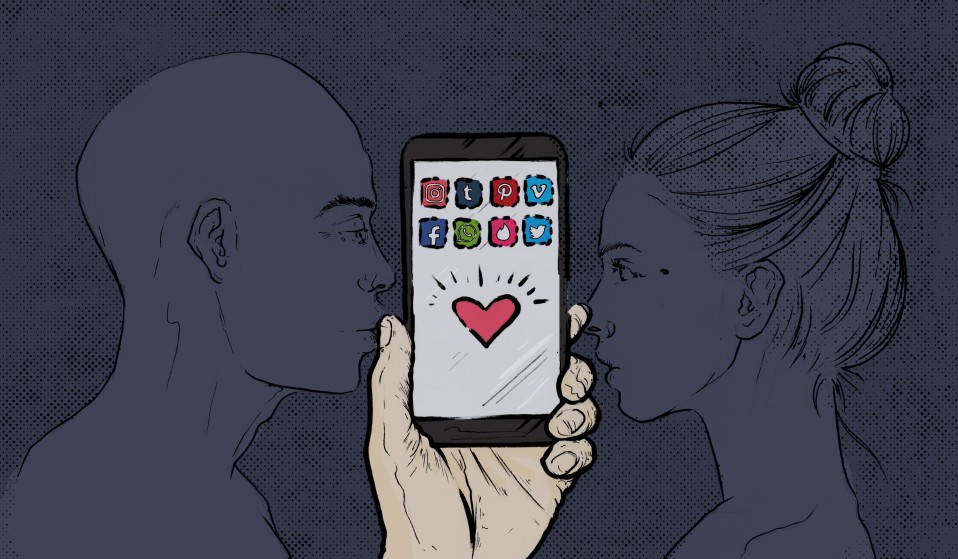 Sexting, swiping and selfies – in a new column, writer Emily Reynolds explores the strange new ways that technology is changing our relationships.

Sexting, swiping and selfies – in a new column, writer Emily Reynolds explores the strange new ways that technology is changing our relationships.

When my fiancé and I finally ended our relationship, it was a long time before I experienced intimacy again. The period preceding the breakup had hardly been full of warmth or closeness either, as you’d expect, but this was final. I already worked alone: now, single again, I lived alone too.

It wasn’t until I went for my obligatory post-breakup haircut, several weeks later, that I realised how little intimacy was figuring in my life at that moment. Sat in the chair, my neck uncomfortably resting on the too-cold edge of a sink, my hairdresser began to massage my head with firm, long strokes as she shampooed my hair. The touch of another person nearly made me weep.

This was partly my own fault, the fastidious self-imposed isolation that many of us put ourselves through after a particularly difficult breakup. But it also spoke to something wider about my life – alone and attached – and about the ways I both received and offered intimacy to the world and the people in it.

The way most of us experience intimacy has changed. We express much of it online, and a significant portion of our intimate relationships with people, platonic or otherwise, is now typed. The banal but meaningful trivialities of a romantic relationship (can you pick up a tin of tomatoes? what do you want for dinner? when will you be home? are you okay?); the intense heart to hearts with friends about love and loss and trauma and feeling; the tentative vulnerability of a potential new relationship; these all take place on iMessage, WhatsApp, Twitter or Facebook. An email can now seem outdated and overly formal; even the end of my engagement to a man that I shared a home with happened via text message.

That’s not to say that those moments of intimacy are worthless, or that they’re not genuinely intimate. But if relationships can be formed, lived, broken and ended online, then that clearly has an impact on the way we relate to each other. And could it mean something for the way we relate to ourselves, too?

Months later, finally dating again, this question came into sharp focus for me. Working alone, I could go days without speaking to someone aloud; when human contact did occur unplanned, I found it almost physically painful. One evening, browsing the makeup aisle in Boots to kill time before a date, an old woman asked me which eyebrow pencil looked better on her skin, and I almost literally recoiled with the weight of what should have been a fairly simple question. Later, actually on the date, my voice felt choked and tangible, heavy in my mouth like the stone of a plum.  I couldn’t help but feel that I’d expressed myself better online, where I was formless and incorporeal, where I could exactingly control what I thought, felt and said.

For a long while, I certainly prefered myself online. I felt sharper, quicker, more attractive, less burdened with trauma, more easily able to erase the parts of myself that were heavy or severe, that were difficult to deal with.

But any deviation from the kind of conversation that made me feel safe would cause my heart to race. Instant messaging platforms, where a response was expected immediately and I couldn’t hide whether I was online or off, were the worst; Twitter DMs felt the safest. You weren’t burdened to respond immediately. Nobody knew if you’d seen their message or not. The platform did not always give itself to sincerity. And I could easily hide behind a persona I had spent nearly ten years carefully crafting.

I knew the truth of it: it was safer because it wasn’t vulnerable, and because it didn’t necessarily require me to reveal too much of myself. I was in charge where normally I would feel out of control: I could command an area of my life where normally I felt as if I had to submit. I was being myself – I never lied, I rarely exaggerated – but I was also not really myself either. The messy contradictions stayed out of it. The emotional baggage stayed out of it. The daily reality of being me was not involved at all.

Much has been written about the death of ‘brb’: we rarely say we’ll ‘be right back’ anymore because we’re all always online, the theory goes. This is at the heart of the kind of intimacy technology can sometimes engender. There, but not really; vulnerable, but in a way we can manage. It’s obvious: being seen all the time is also the best way of not being seen at all.

My experience is not unique in the slightest: our relationships, no matter what form they take, are all being subtly changed – sometimes warped, sometimes transformed – by the internet.

Over the next few months, I’m going to be exploring those transformations. Sexting, sex, selfies, falling in love, falling out of love, politics, communication, heartbreak – all topics I’m going to be writing about. There’s a lot of negativity in this area: essays on how dating apps are ruining our attention spans and our sex drives; how we now, thanks to technology, see everyone else as disposable. But most of this writing fails to tell the whole story.

The hurt can be real. But so can the happiness, desire, intimacy and fun. It’s in these intersections of pain and joy that I’ll be looking – no matter how messy, how complicated, or how contradictory they might be.

Linkedin
RELATED ARTICLES
OTHER ARTICLES
Ireland’s national sports are modernising. At the forefront of this movement is Na Gaeil Aeracha, the country’s first ever queer GAA club.
Hackney Bumps is a DIY sanctuary in the heart of East London, home to a thriving diverse community of skateboarders – and beyond.
A campaign seeking to prevent future injustices where there is state involvement is gaining momentum, with Labour recently pledging its support.
Meg Handler’s photos capture diverse groups of New Yorkers coming together for the collective cause of civil rights.
Jack Lueders-Booth reflects on capturing the community that lived and worked along the city’s busiest railway route during the 1980s.
Through stills, anecdotes and film criticism, a new book examines the portrayal of women’s destructive emotions, reframing it as a challenge to patriarchal structures.